Pollution is a global problem, among the greatest the world collectively faces. The World Health Organization approximates seven million deaths annually to air pollution, with countries like India and China experiencing record levels of hazardous particulates. Trash fills our streets and oceans, creating a debris heap the size of an island you might expect to see somewhere off Hawaii’s main archipelago in the case of the Great Pacific Garbage Patch.

It’s not all bad news, though. World leaders have pledged to look to energy alternatives to curb dangerous emissions and streamline waste-management systems to cut back on litter. India is working toward using exclusively electric vehicles, rickshaws included, by 2022. Beijing even hopes to power the 2022 Winter Olympics with as much renewable energy as possible.

Global citizens are doing their part, as well. Grassroots initiatives like #trashtag, a social-media movement promoting local cleanup efforts, are encouraging sustainable practices the world over. Measures both big and small, all of them significant, are being taken to curb pollution, some more creative than others. The following places are proving just how much of an impact a little brainstorming and elbow grease can have on cleaning up the planet. After all, if every mindlessly flicked cigarette butt adds up, so does every thoughtfully recycled plastic. 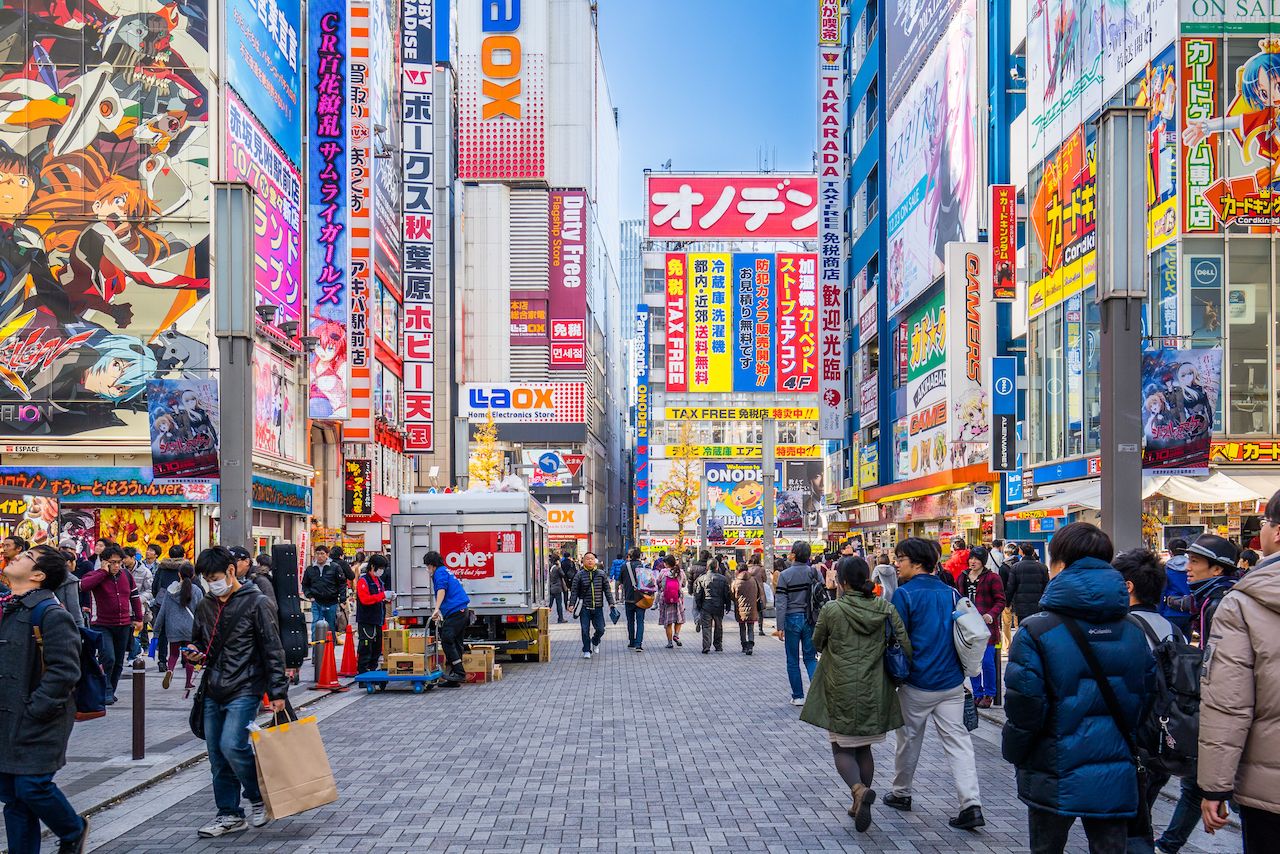 Anyone who’s been to Japan knows that public trash cans are surprisingly hard to find. Yet, somehow, you have to hunt just as hard to find litter.

Following a series of deadly sarin gas attacks on the Tokyo subway system in 1995, most of the nation’s trash bins were removed. Though some would take the absence of bins as license to litter, Japanese citizens only became more responsible for their waste, opting to carry it on their person until they can dispose of it responsibly. It’s even common for smokers to travel with personal ashtrays, and most people carry hand towels since paper towels were largely done away with alongside trash cans in public restrooms.

Pollution is minimal throughout Japan, but one town in the Tokushima Prefecture goes above and beyond. More than 15 years ago, Kamikatsu implemented a zero-waste policy in the hopes of being completely garbage-free by 2020. Where many places in Japan burn, bury, or dump their trash in landfills, Kamikatsu relies on composting and recycling, a comprehensive procedure that includes sorting waste into 45 different categories.

Going completely waste-free is a lofty goal, but in Kamikatsu’s case, the policy has been surprisingly attainable with an 80 percent success rate to date. And with half a year to go before the town’s self-imposed deadline, time will soon tell how easy it is to be collectively waste free. 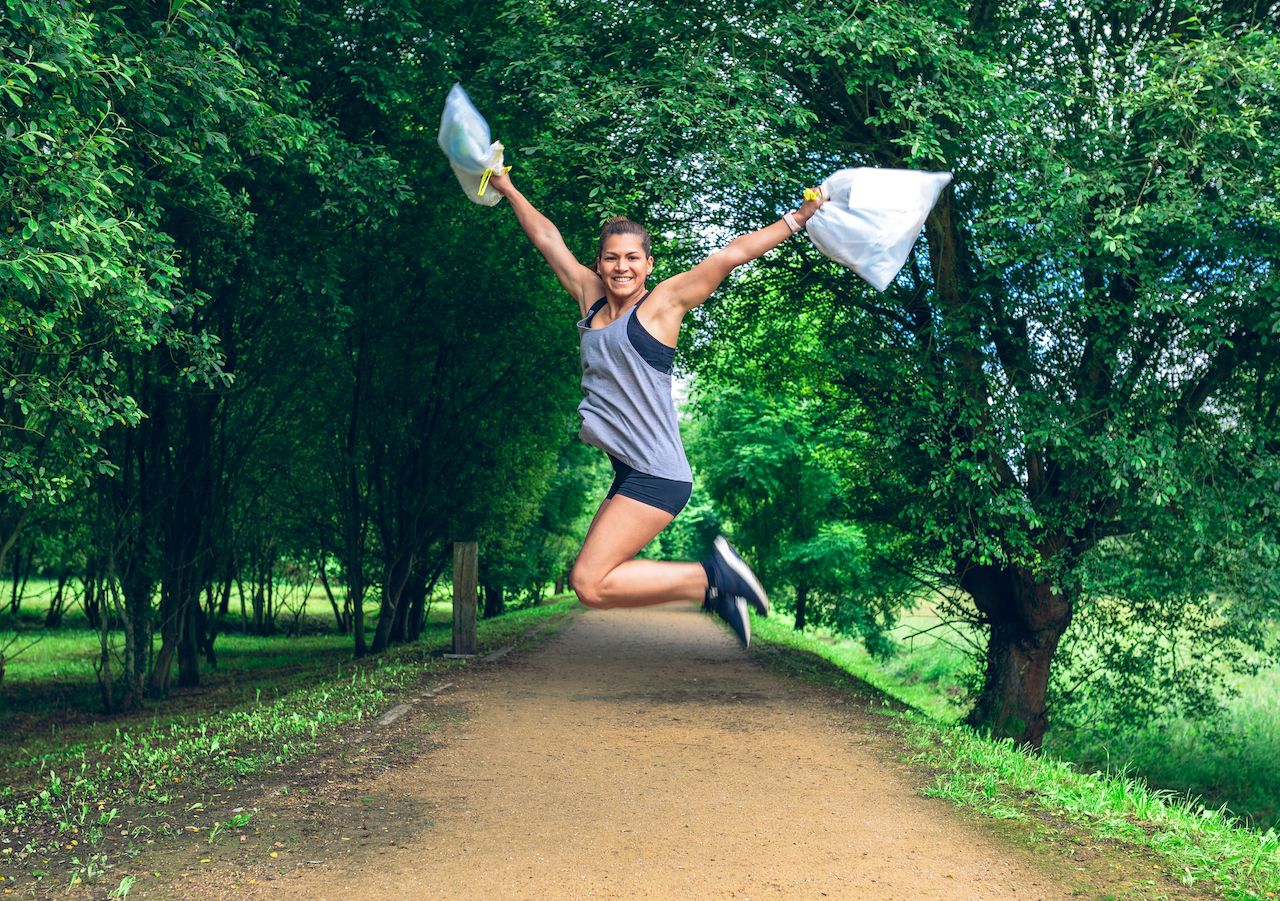 There’s a new fitness craze in Sweden that’s as good for the environment as it is for the body. It’s called plogging, and it’s as simple as picking up trash while you jog. Now a global trend that’s been documented everywhere from New York City to Australia, the phenomenon began in Are, Sweden, thanks to eco-enthusiast Erik Ahlstrom.

While you can join group events in Stockholm and beyond, plogging is a worthwhile exercise anytime you want to squeeze in a workout. Not just good for the planet, it’s also a great way to upgrade your daily jog. After all, as Ahlstrom told Reuters, “Plogging burns more calories than regular running — you have to bend and squat, it’s good for the legs and you get a better body.” 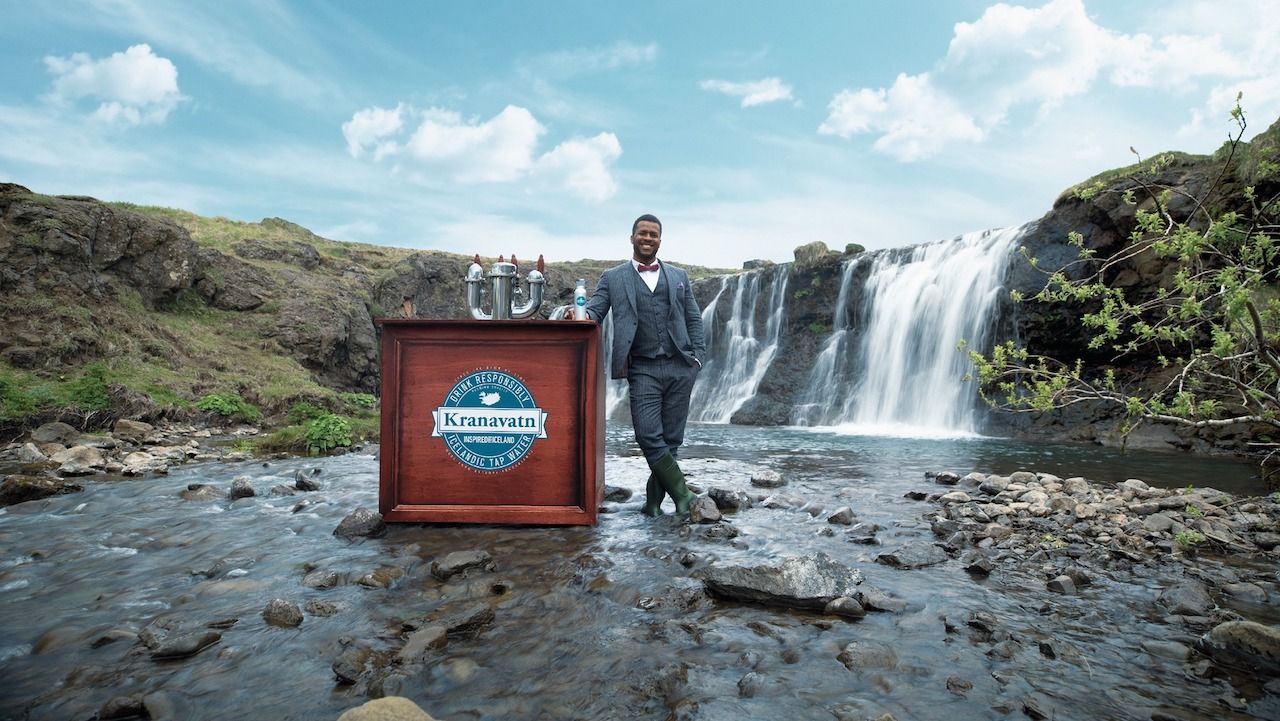 Sometimes it’s the simplest, most careless acts of consumption that have the greatest consequences, like buying a bottle of water on a hot day because you can’t be bothered to track down a drinking fountain. Though many of us now carry reusable bottles at home, old habits die harder abroad, a problem Iceland’s tourism board is trying to remedy.

Imploring visitors to hydrate responsibly, Inspired by Iceland has issued the Kranavatn Challenge to promote its premium tap water brand. Kranavatn is just regular tap water, but by branding it as a luxury good in airports, restaurants, and other places tourists frequent, the country hopes to steer travelers away from single-use plastic bottles.

Beyond doing your part to reduce the negative impact Iceland’s surging tourist numbers are having on the small nation, signing up for the Kranavatn Challenge has its perks. Every participant who pledges to stick to tap water while in Iceland will receive a credit for the amount they’d otherwise spend on bottled water, which can be redeemed at select locations. 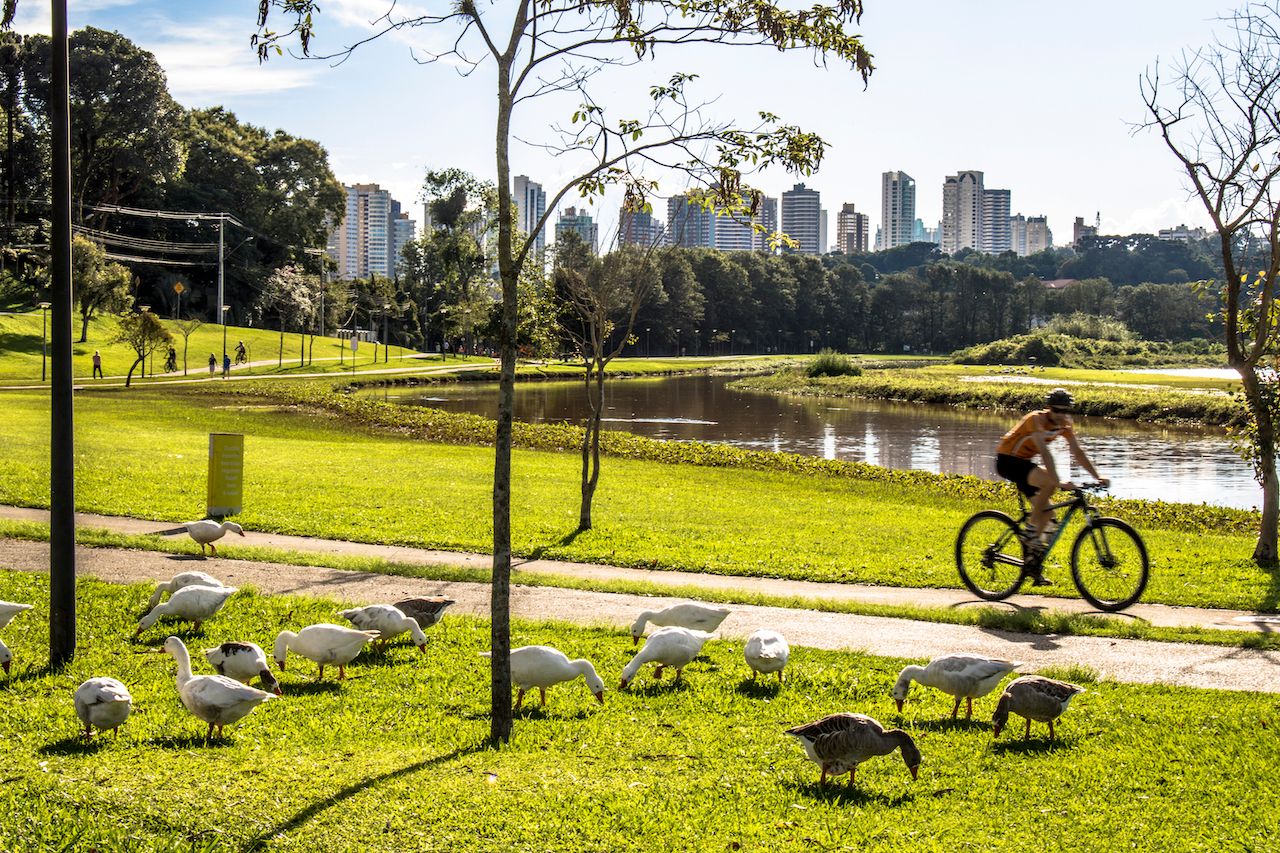 If you ask Curitiba, trash can be more than just garbage; it can be currency. Lacking a budget for a recycling center, the city found a more creative solution for its waste disposal by incentivizing residents to sort their recyclables through an exchange program in which organic and non-organic materials can be redeemed for bus passes, school supplies, and more.

Not only helping reduce pollution and manage landfills, the lixo que não è lixo (“garbage that is not garbage”) program is also addressing a number of community issues. That students can trade recyclables for books and other supplies is improving literacy rates and normalizing sustainable practices for the younger generation. The program is also stifling food insecurity as recycled waste can be redeemed for food and produce grown on local farms. 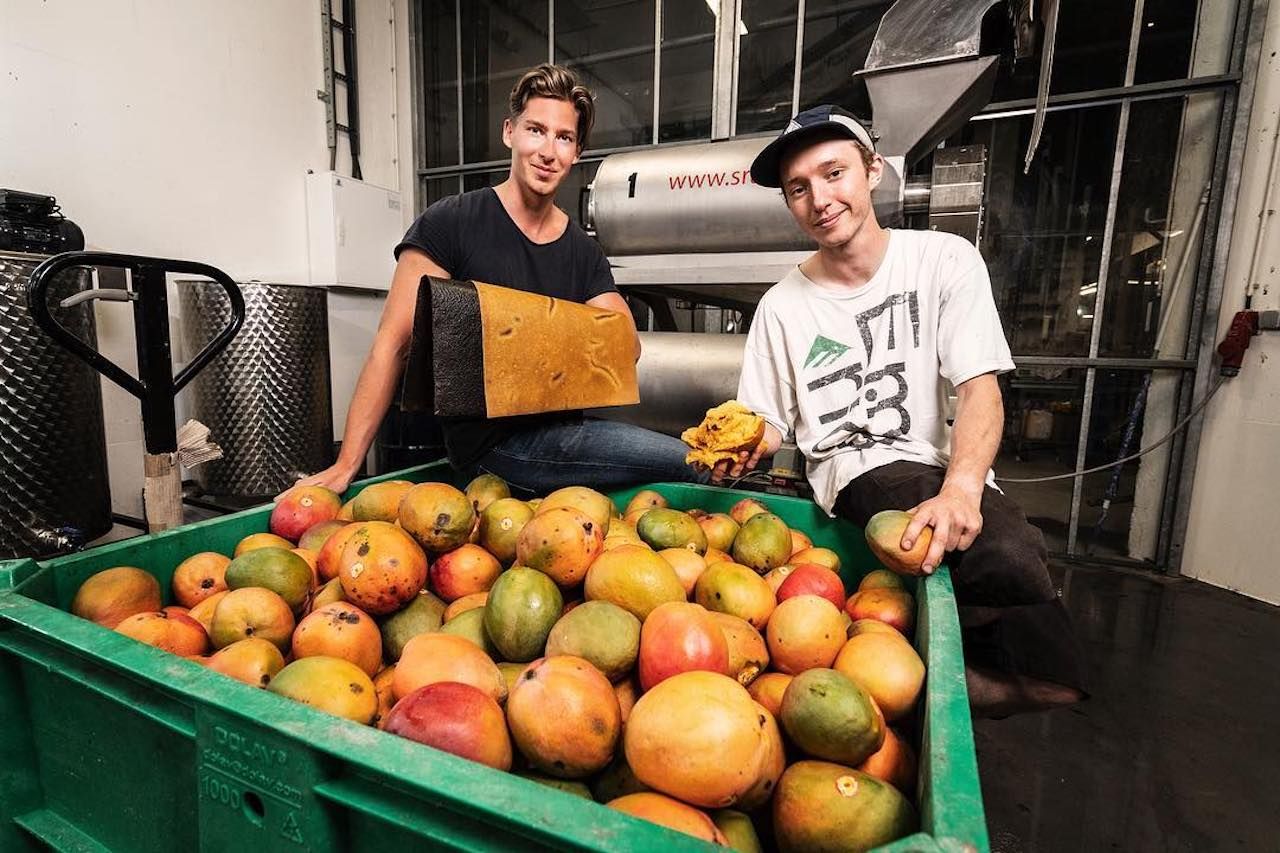 The fashion industry has always taken flak from animal-rights activists, but more and more eco-warriors are starting to point the finger at clothing and accessory manufacturers. Leather goods are particularly bad for the planet, resulting in everything from greenhouse gas emissions to water pollution. Rotterdam’s Fruitleather project sources leftover fruit from Dutch importers to create a “durable, leather-like material” that can be used to make everything from shoes to purses while leaving a fraction of the carbon footprint. The initiative’s chief goals are to create a sustainable alternative to animal leather and highlight the problem of food waste, simultaneously demonstrating that positive uses for waste exist. 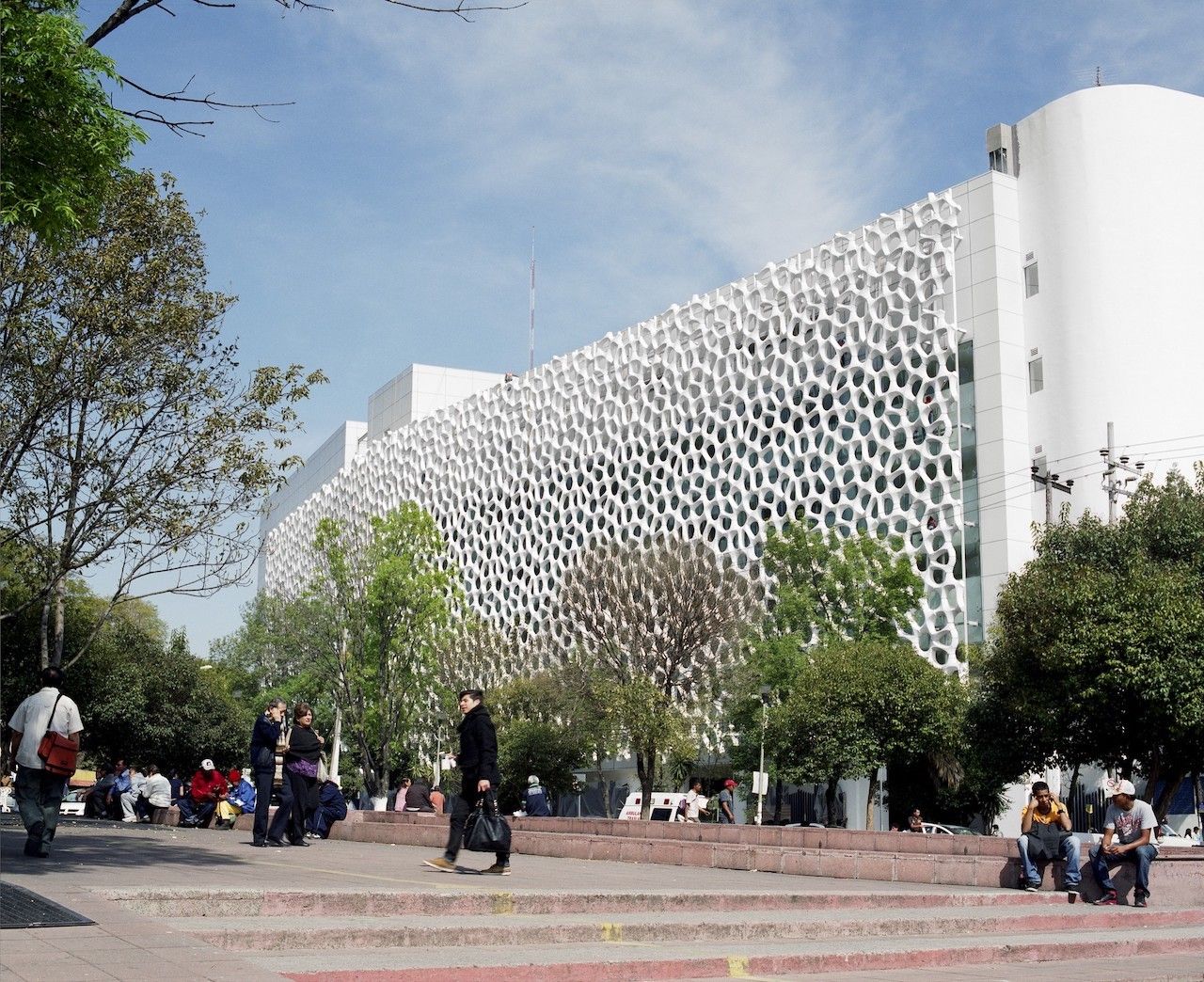 A sprawling metropolis with more than 21 million residents, Mexico City has a massive smog problem. Equally massive strides will need to be taken to get the city’s air pollution under control, and while its innovative smog-eating hospital won’t improve the overall air quality on its own, it certainly gets points for creativity.

Yes, you read that right. The Torre de Especialidades hospital in Mexico City is designed to absorb smog and turn pollutants into harmless byproducts. It’s covered in tiles that have been coated with titanium dioxide, which undergoes a chemical reaction when exposed to sunlight that turns pollutants into water and carbon dioxide. Rather than reverse the effects of the city’s countless cars and factories, the hospital’s aim is to counteract at least some of the damage and purify the air in the immediate vicinity of the hospital to make it a safer place for patients.

Similar smog-filtering technology has also appeared in Milan, where the Palazzo Italia was constructed out of biodynamic cement and unveiled at the 2015 Milan Expo. With any luck, cities around the world will take cues from these two and start erecting greener buildings. 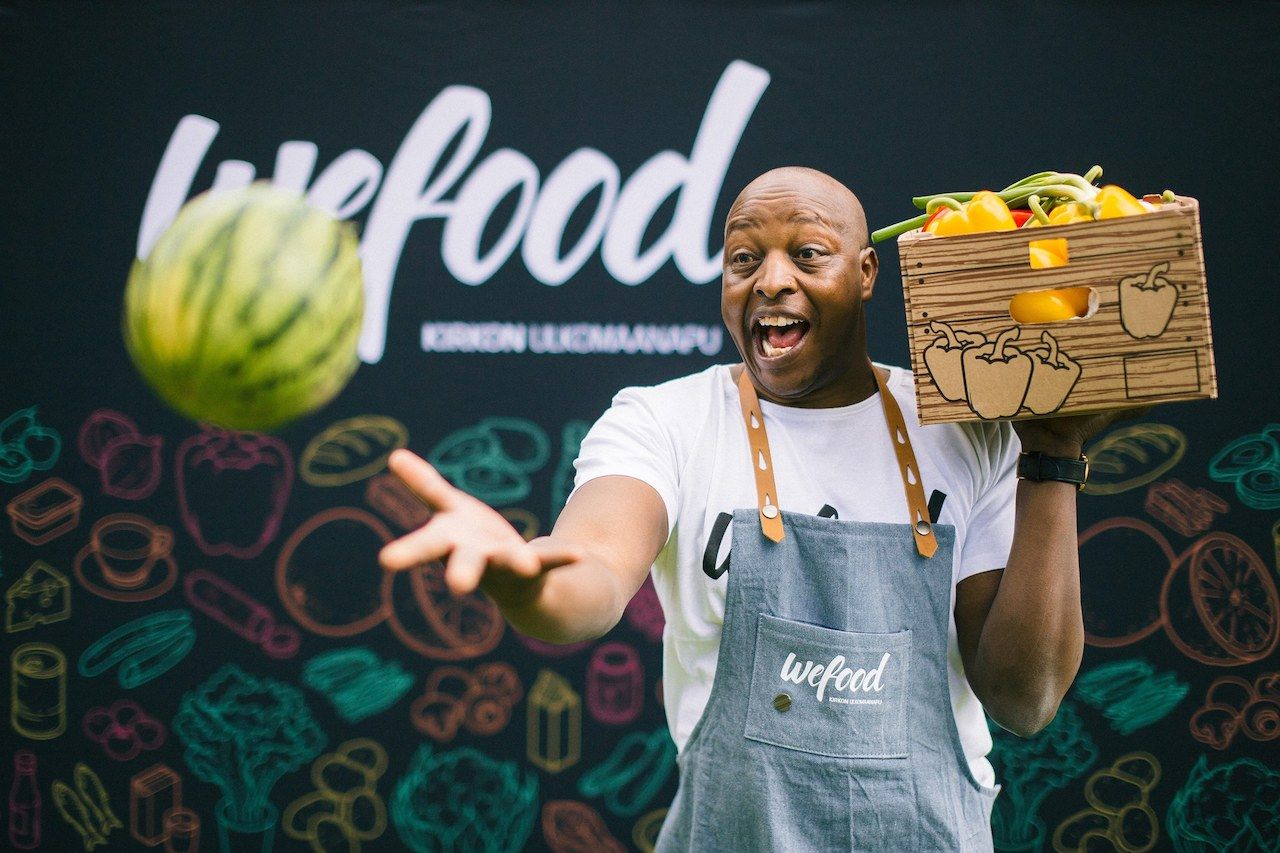 Denmark is tackling pollution on all fronts, placing particular emphasis on eliminating food waste. In just a few years, the country’s food waste has been reduced by 25 percent thanks to Selina Juul and her organization, Stop Spild Af Mad, which began by appealing to supermarkets to offer discounts on individual, rather than bulk, produce. Danish capital Copenhagen has since opened a surplus supermarket, Wefood, offering produce at radically reduced prices to cut down on discarded food and benefit low-income shoppers.

Off the coast of Denmark, one island has taken particularly impressive measures to reduce its waste. And not just its food waste. With its incinerator on its last leg, Bornholm intends to reuse or recycle all of its waste by 2032 rather than invest in a new one. Like the residents of Kamikatsu, Japan, islanders will be asked to sort their trash into several categories, as well as organic waste that can be converted into energy sources. 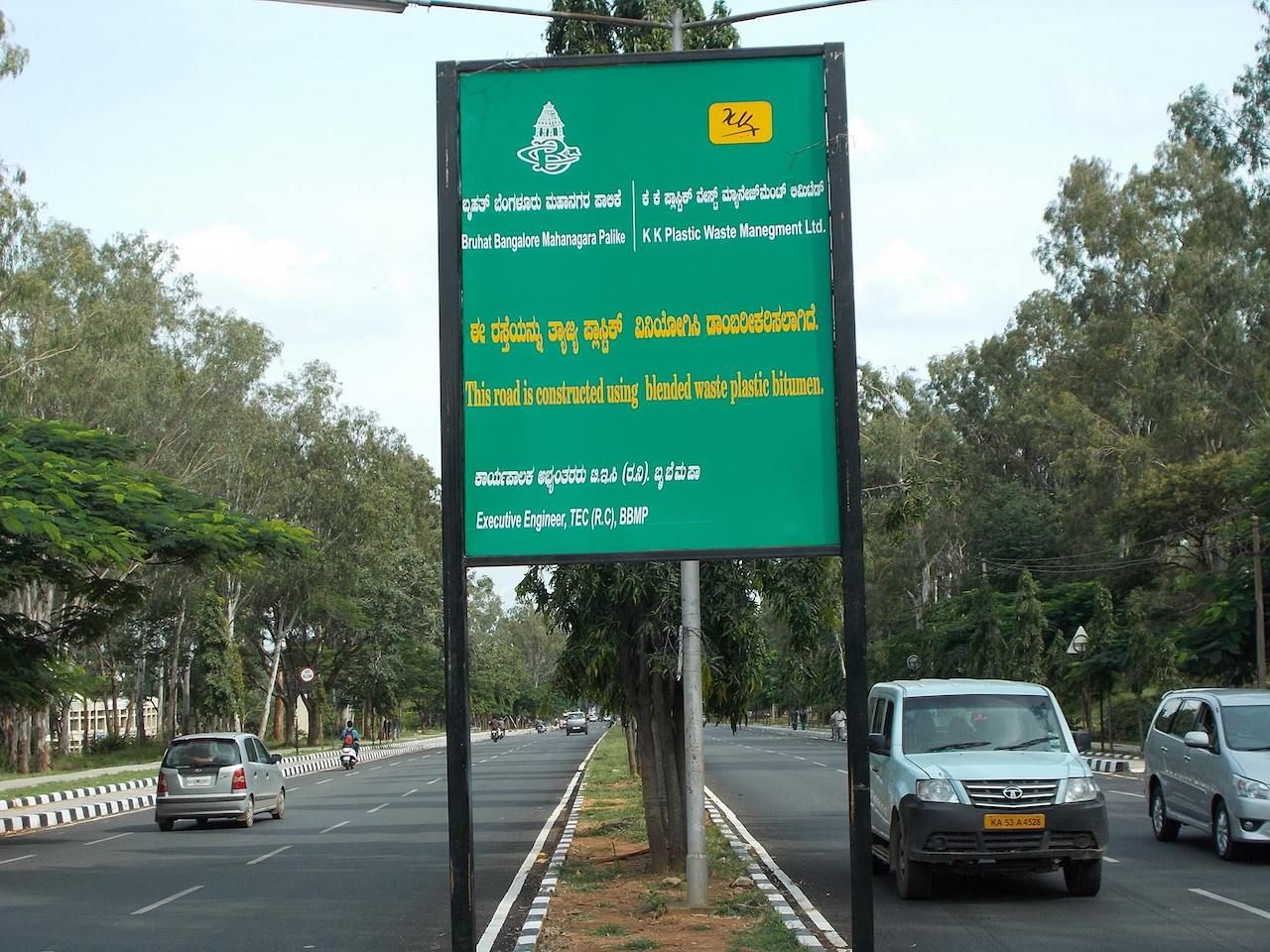 Bangalore’s KK Plastic Waste Management Ltd has found a practical fix for plastic waste that’s improving the city’s roads. The company operates a recycling plant that’s able to process up to 30 tons of plastic per day and, using a patented technology, turn all that waste into asphalt. Not only does this make the city’s roads sleeker, safer, and more durable, but it’s also creating jobs for locals. To date, the company has laid more than 1,200 miles of asphalt from around 10,000 tons of repurposed plastic. So, while car pollution is a problem of its own, at least Bangalore’s drivers can feel good about the roads they’re cruising down. 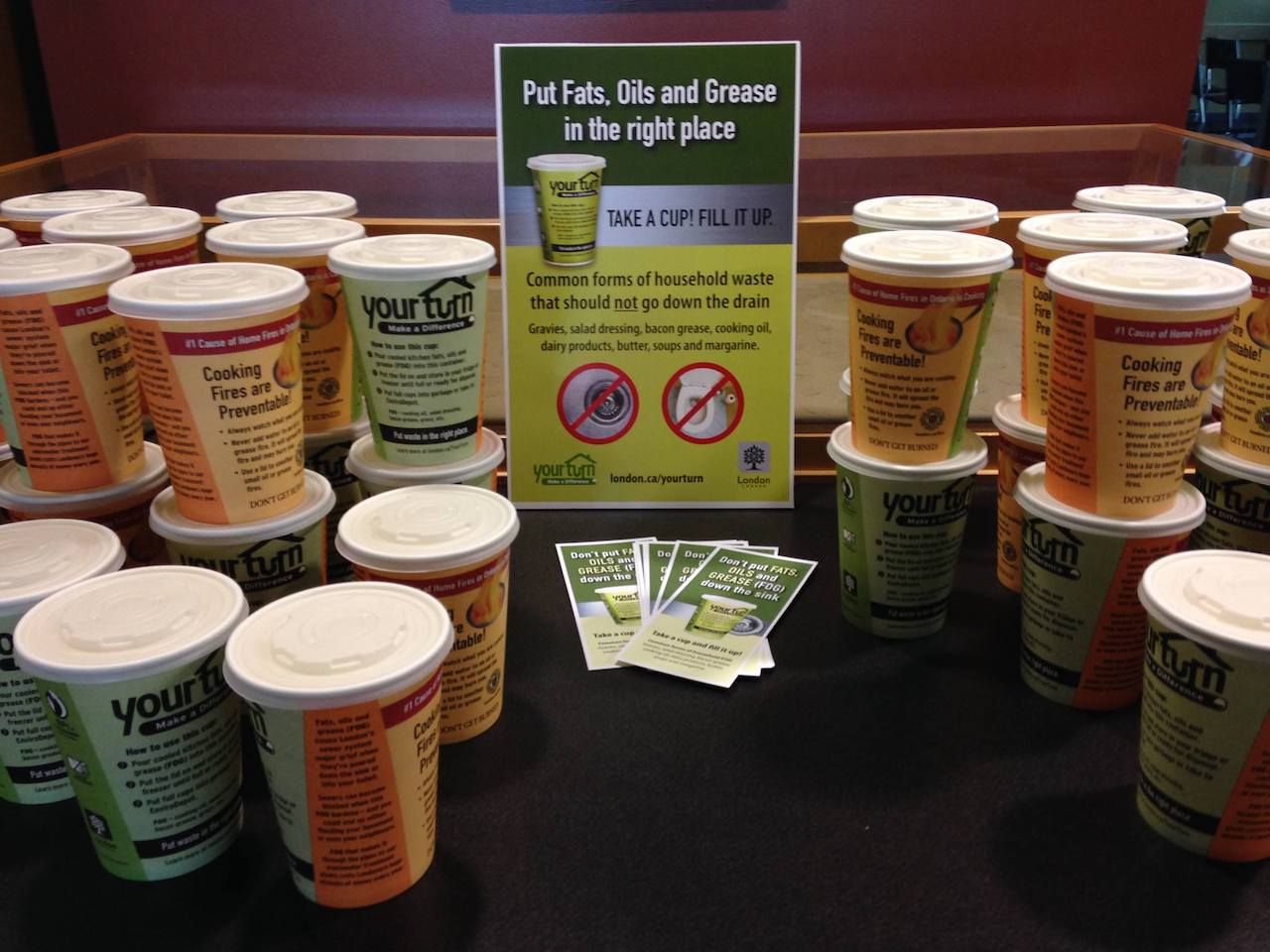 It’s all too easy to throw a greasy skillet in the sink after frying up your dinner, only to wash all that fat down the drain when you finally get around to doing the dishes. But improperly disposing of cooking oil can lead to fatbergs, masses of congealed grease that are exactly as gross as they sound. Fatbergs have a tendency to clog sewers, which is both expensive for cities and environmentally problematic. That’s why London in Ontario, Canada, encourages residents to use Your Turn cups to safely unload their fats, oils, and grease. All they have to do is empty their waste into the cups, freeze them, then deposit them at EnviroDepot centers where they’ll be converted into green electricity. Your Turn cups are available free of charge at the London Public Library.

Every responsible individual and family makes a difference, but commercial kitchens use considerably more cooking oil, compounding the fatberg problem significantly. Ontario has them covered, too. Canadian firm Green Oil Incorporated helps restaurants in the greater Toronto area recycle their grease by reselling it so that it can be turned into biodiesel products. 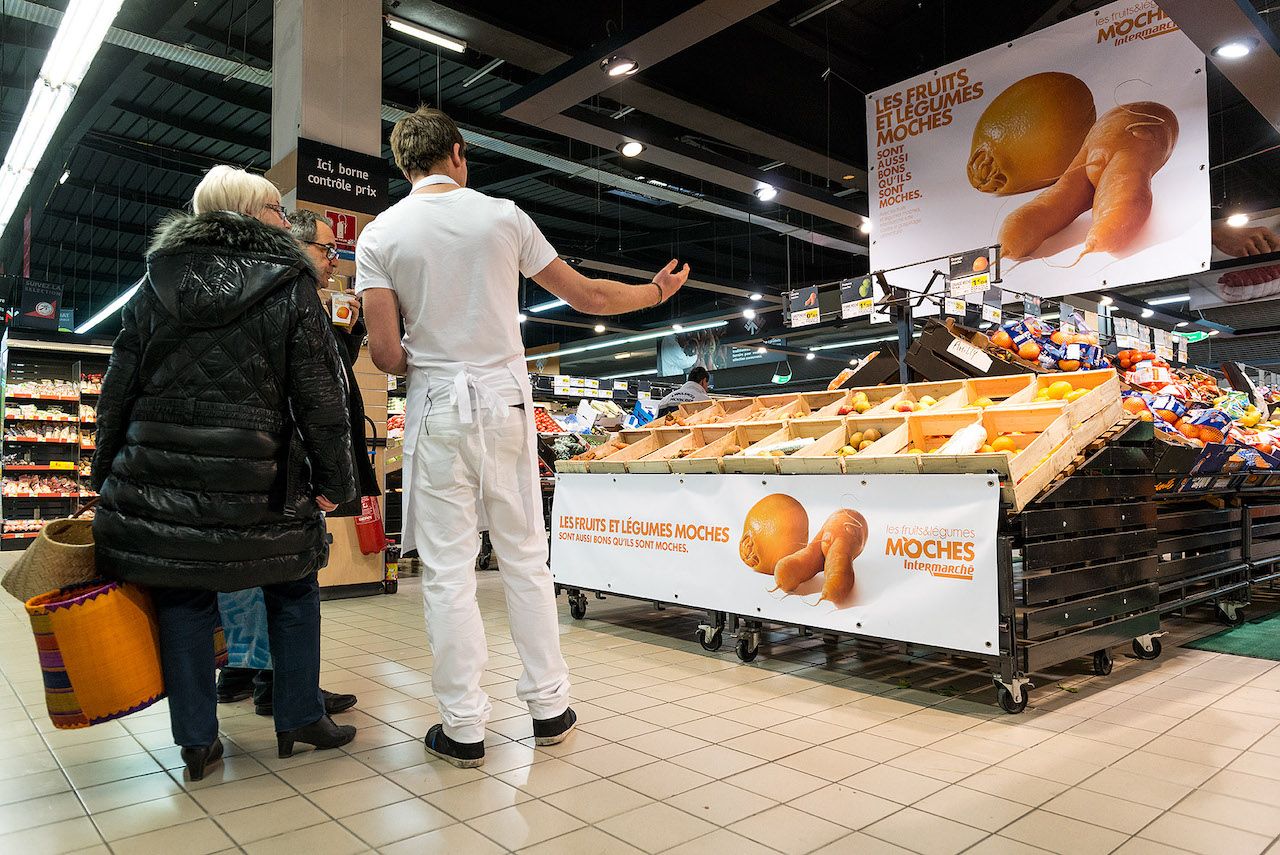 Not buying a bunch of bananas because you won’t eat them all before they go bad is one thing, but passing on an apple because it’s not as shiny as the others is a quick way to guarantee that a whole lot of perfectly good food goes to waste. And yet it happens. Constantly. Not in France, however, or at least at supermarket chain Intermarché, which sells its lopsided, irregular, or otherwise ugly produce at a serious discount. In another bid to curb food waste, the French Senate also passed a law a few years ago that made it mandatory for supermarkets to donate unsold food to charities and food banks rather than discard it.

Just this year, France passed yet another progressive pollution law, this time targeting light pollution. Light pollution is often overlooked in conversations about pollution, but it can have a devastating impact on wildlife by disrupting sleep cycles and drawing animals out of their natural habitats and into unsafe urban areas. France’s new law introduced regulations on public outdoor lighting features, implementing curfews and blue-light restrictions, banning sky beams and high-intensity lights, and prohibiting lights pointed toward the sea after dark, among other measures. It’s a big gesture for a country with a capital that’s nicknamed the City of Lights, and, hopefully, one that sets a trend for the rest of the world.

Sustainability6 Steps You Can Take Today To Become a Zero Waste Traveler
Tagged
Sustainability
What did you think of this story?
Meh
Good
Awesome