Amsterdam — the city famous for its canals, stroopwafel, and, of course, adult entertainment. The Dutch capital has more than earned its reputation for being one of the most interesting cities in the world, but its icon status has also made it incredibly crowded — to the point where the city is ditching the popular tours of its red-light district and some tourist-centric shops are shutting their doors, overwhelmed by over-tourism.

The city has been dubbed the “Disneyland of Europe” by continental and international tourists alike. This is a sign that as incredible as Amsterdam is, it’s time to look beyond the city limits to really discover the Netherlands and dive deeper into the local culture. Rotterdam, a city of about 650,000 known for quirky architecture and Dutch cuisine uninterrupted by a constant stream of tourists, is the place to do just that. While you should definitely consider using it as the base for your Netherlands vacation, you can also see Rotterdam in a single day trip if you’re still set on checking out Amsterdam first. Here’s how to make the most out of a stay in Rotterdam.

Rent a bike and pedal through town. 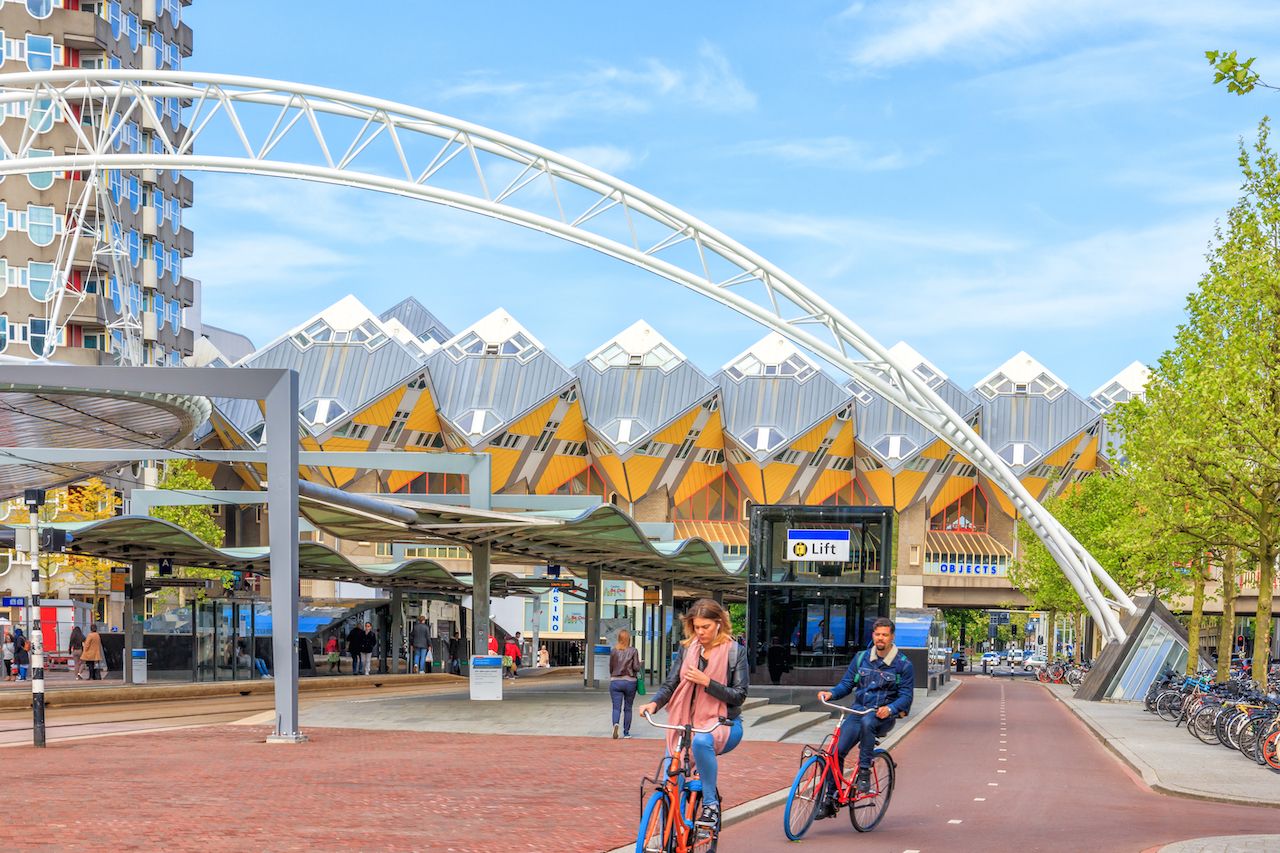 Getting to Rotterdam from Amsterdam is, in the rail-centric tradition of Euro travel, super easy. Just hop on the train from Schiphol heading east and you’ll be at Rotterdam’s Central Station in about 45 minutes. Once you get to Rotterdam, the first thing to do is to rent a bike from one of the docking points near the station — this is how locals get around, and it’s the best way to cover a lot of ground in only a matter of hours. While the city isn’t huge, you definitely want to have your own means of transportation because taxis are expensive, and at some point, you’ll crave a Jamaican Me Crazy burger from Burgertrut while on the other side of town. If you’re around five feet tall or are otherwise terrified of the giant Dutch bikes, you can also use your feet and walk around Rotterdam along the pedestrian roads. Pick up a Roaming Rotterdam brochure from the Central Station for €1.50 and you’ll get a map of all the hotspots worth seeing, adapted for walking.

Marvel at some of Europe’s most progressive architecture. 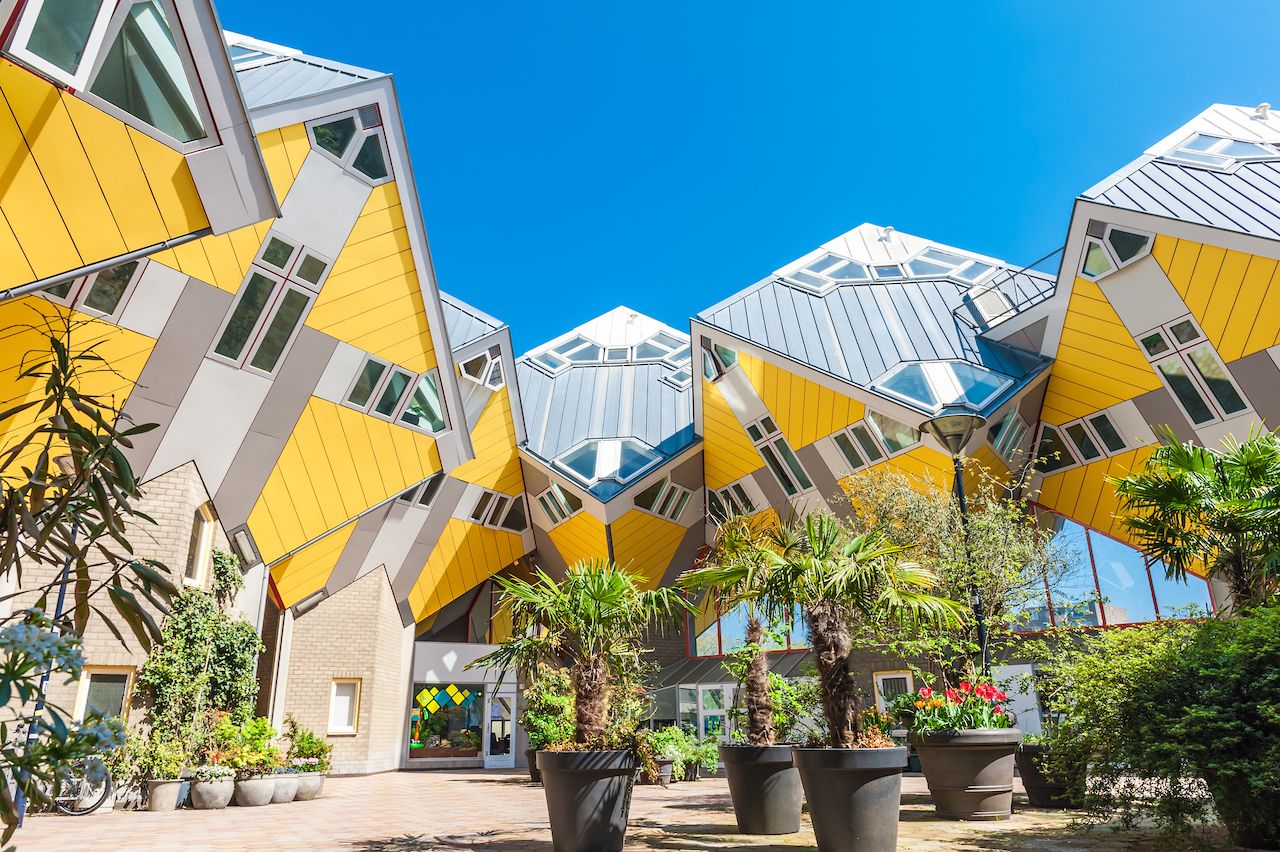 A visit to Rotterdam will make you rethink the narrow canals and cobblestone streets that come to mind when you think of the Netherlands. The city was completely destroyed during World War II, and as it underwent its slow and at times painful rebuilding process, the locals decided to get creative. It’s now the country’s hub for modern, uber-progressive architecture. In a noticeable difference from Amsterdam, you’ll find only one central canal in all of Rotterdam. Rather, the city’s defining characteristics are its Dutch architecture and shiny office buildings.

The ideal place to revel in the city’s unique vibe is Kijk-Kubus, which translates to the Cube House, a furnished museum house that puts you inside this architecture and offers a glimpse at what it would be like to live in a twisted, funky house by the water. Then, check out Timmerhuis, which is designed to resemble a pixelated cloud with the help of small light-reflecting blocks. At night, Timmerhuis beautifully mirrors the lights of the buzzing city. Van Nelle Fabriek is worth a visit as well, just off the A20 highway and declared a UNESCO World Heritage site in 2014. It was built in Dutch modernist style, and up until the ’90s, this building was actually a functioning tobacco factory. In the early 2000s, it got a shiny makeover and now is the home to dozens of media and design firms. 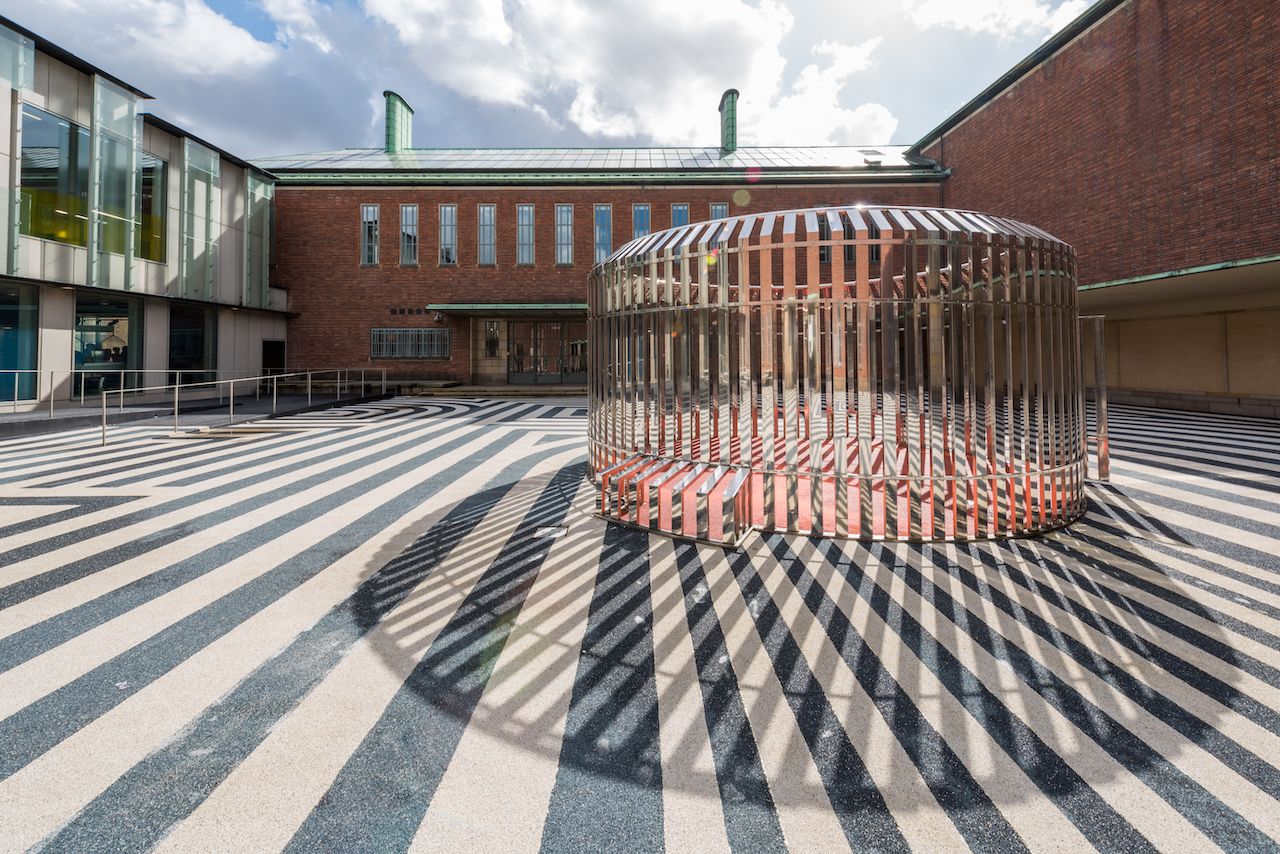 Modern art lovers will also find plenty of museums to take in. Start with Museum Boijmans van Beuningen for contemporary art, including works from Rembrandt, Claude Monet, Vincent van Gogh, and Salvador Dalí. Then continue on to Kunsthal, which houses no permanent collection but has included exhibits on artists like Andy Warhol and Chuck Close. If you’re a photographer (sure, a curated Insta feed counts, too) check out Nederlands Fotomuseum.

End your art tour of the city by riding the water taxi from Leuvehaven to Hotel New York. You’ll cross the Maas and get a sweet view of the skyline. 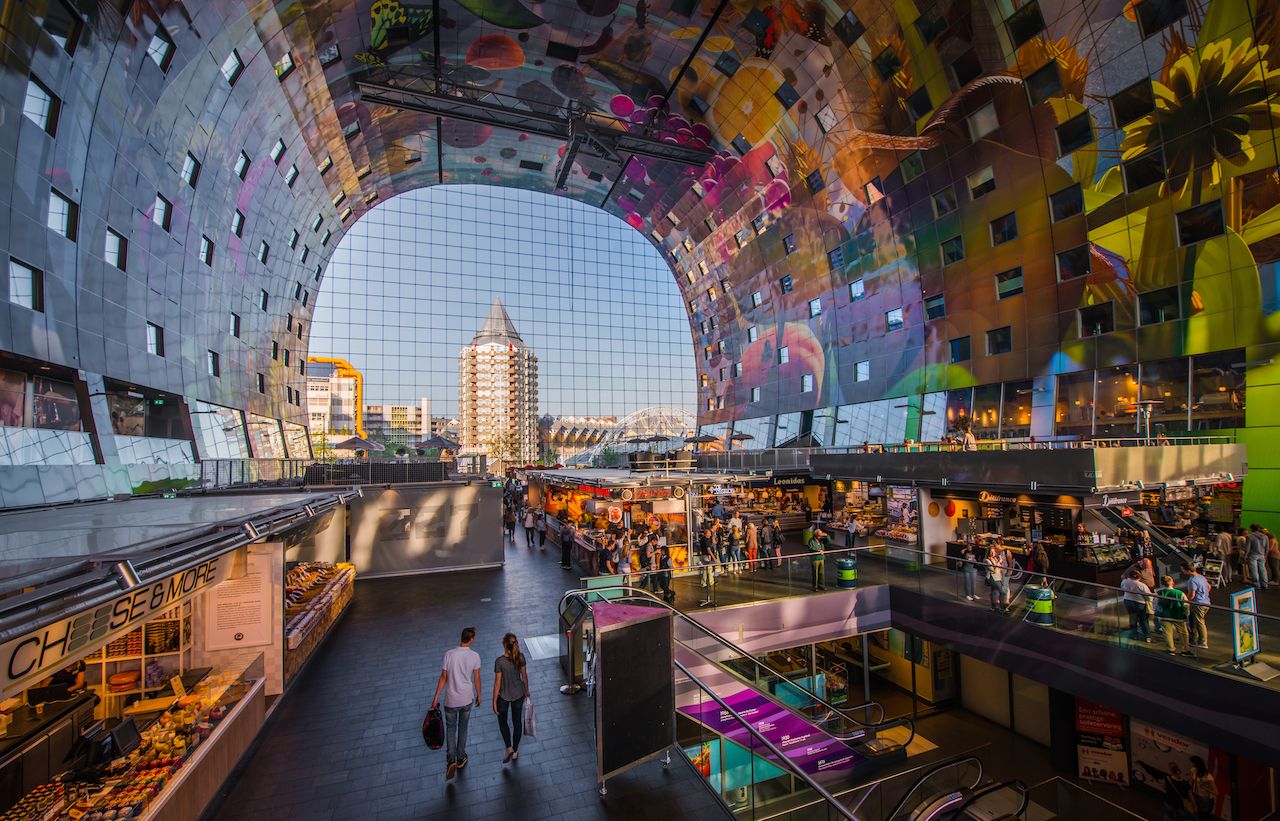 Any visit to the Netherlands won’t feel right without a stop for fries and mayo, which you can find anywhere in town. But if you want to sample as much varied fare as possible, head to Markthal (or Market Hall). This ultra-modern building is part apartment complex, part food hall, and it’s surrounded by colorful digital panels of artwork and flanked by two massive glass facades. The market features fresh produce, fish, flowers and other goods, along with several eateries, such as 21 Pinchos Tapas Bar and Andalus Fish. The people-watching isn’t bad either. 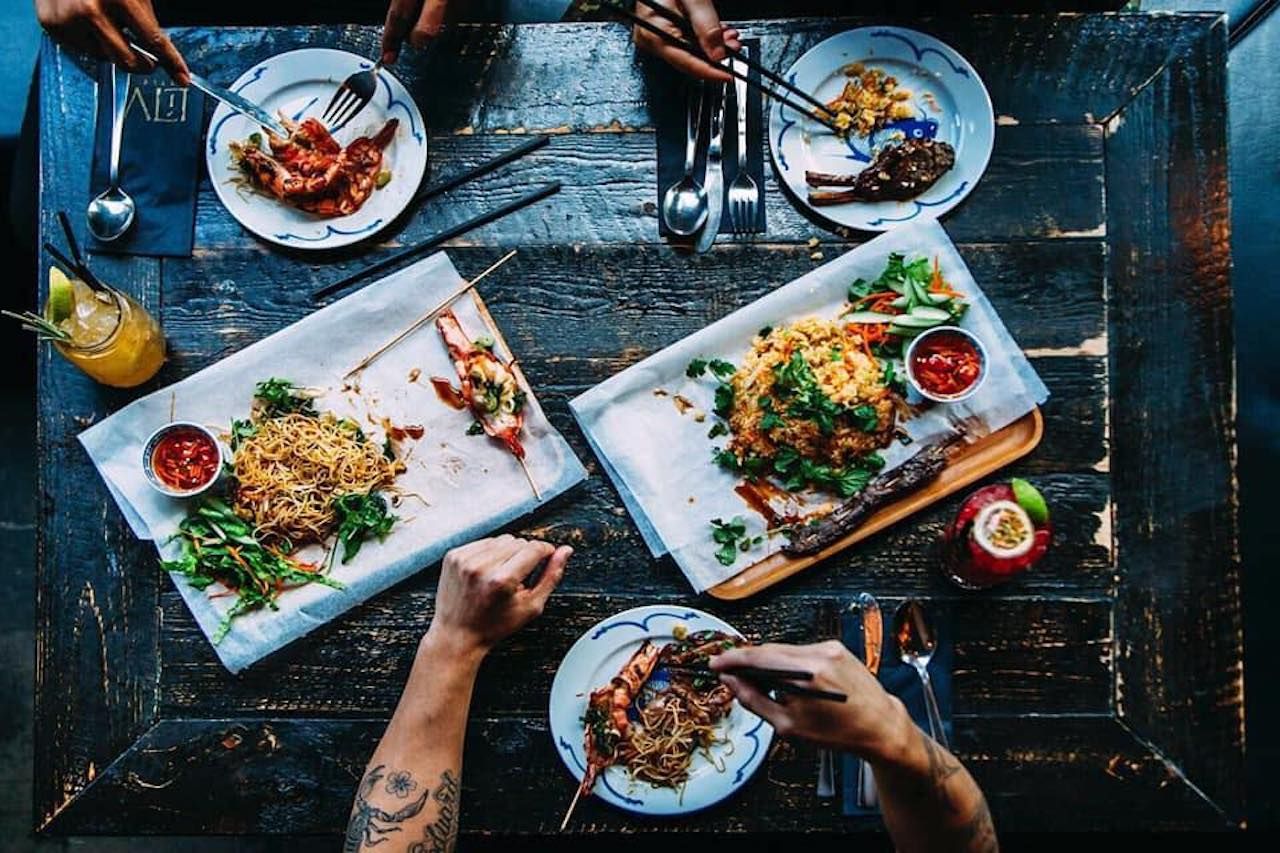 Rotterdam is also home to a thriving multicultural food scene and especially delivers on Asian cuisines. There’s Little V for Vietnamese, Soi3 for Thai, Seoul Sista for Korean BBQ, and Kampong Express for Malaysian (be sure to try the coconut rice). Vegetarians can also get their fill at De Kade, a Chinese and Surinamese restaurant specializing in vegetarian and vegan food, in addition to some tasty meat dishes. 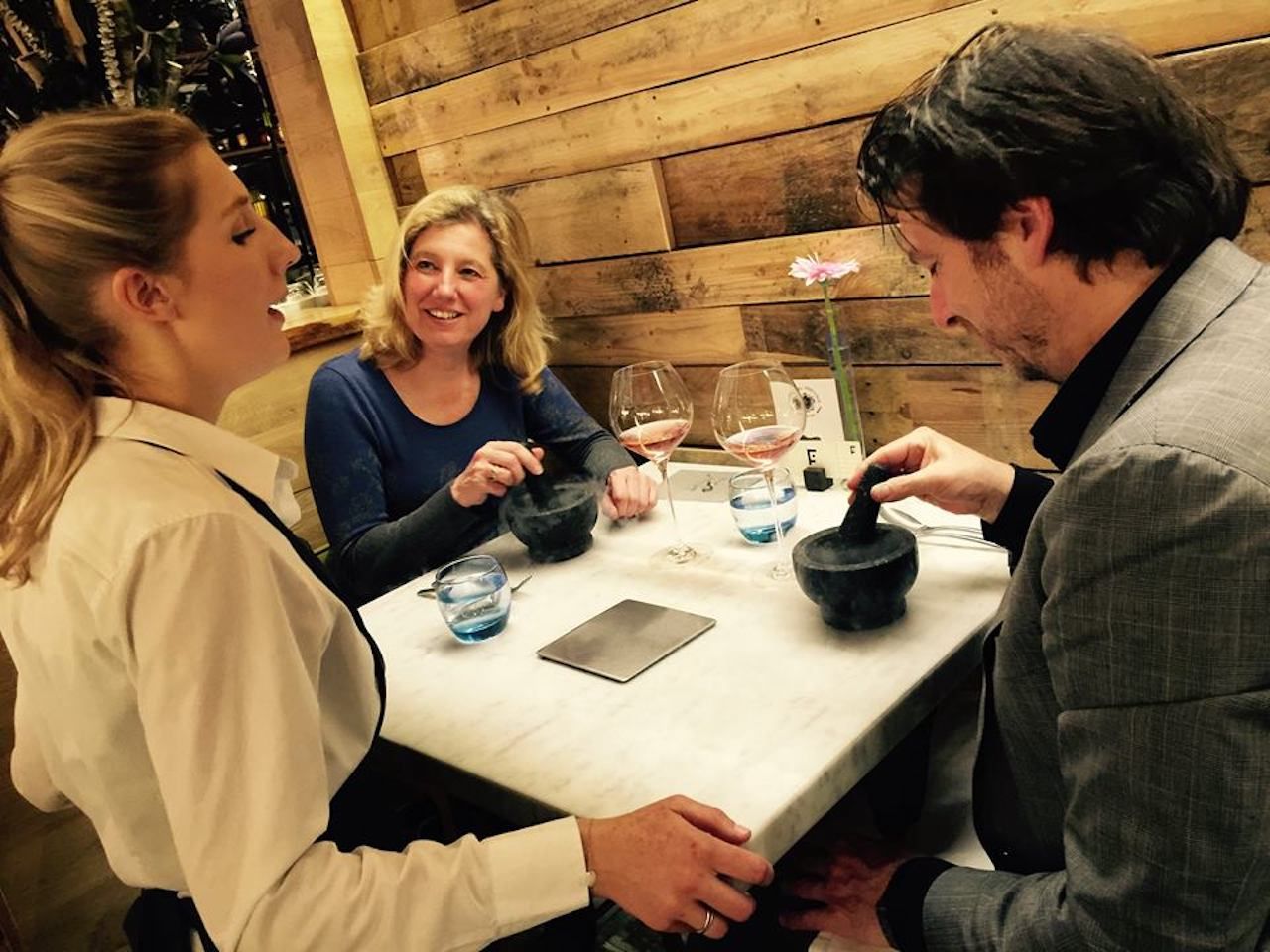 Much like its architecture, Rotterdam has also embraced modern dining with fervor. Zinc, a French restaurant off the waterfront adjacent to Het Park, is all about organic, local ingredients and fine wine. The menu changes every two weeks and is told to you in person. There’s also FG Foodlabs, a Michelin-star restaurant where they are always experimenting with new combinations, flavors, and textures. The signature dish is the FG Nitro Lab style, where the diner grinds fresh herbs with a mortar and pestle, then adds liquid nitrogen, then adds yogurt ice cream and lime for a refreshing, if time-consuming, dessert.

If you do end up staying the night in the city, go to Lilith for a stack of Dutch pancakes (a very traditional dish) and a latte the following morning on your way back to the train station.

Head out at night — and be ready to dance. 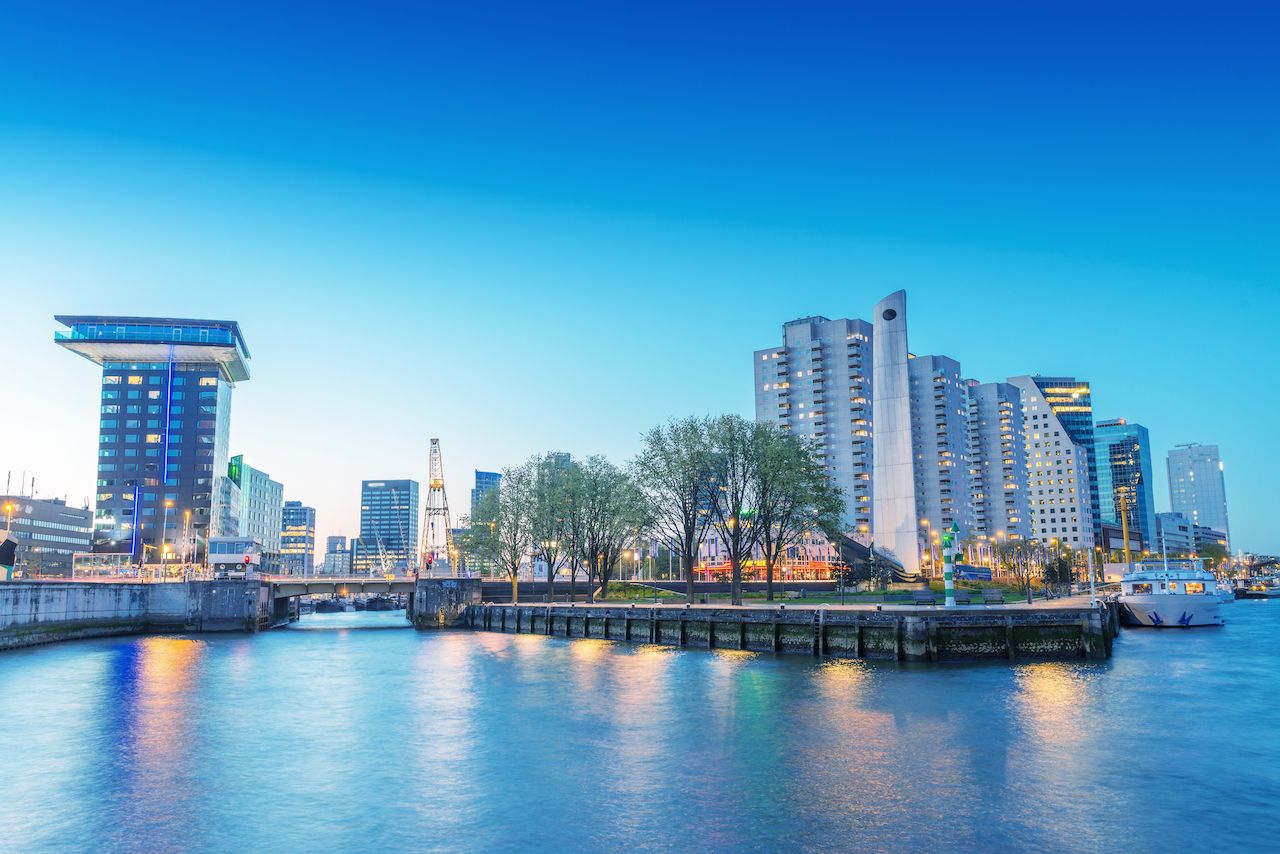 After dinner, hang out in the fresh air over a pint at Biergarten. The place is one of the best spots to mingle with locals though it does get busy when the weather is good, so head over early if possible. The dance scene is very active, so if you push yourself past a post-dinner pint you’d better be ready to move. Thanks to the city’s ethnic diversity, the afrobeat and dancehall scenes are super popular. Petit Afro is one of the local favorite choreographers who can teach you how to bust a move like a pro and gain control of your hips after a single class. If you’re into Latin dance, there’s plenty of salsa and bachata to be danced in town as well with weekend socials. Striktly is a fun dance spot to hit up every Tuesday at Stadhuisplein. You’ll find Kizomba every Tuesday at Coconuts right next door. 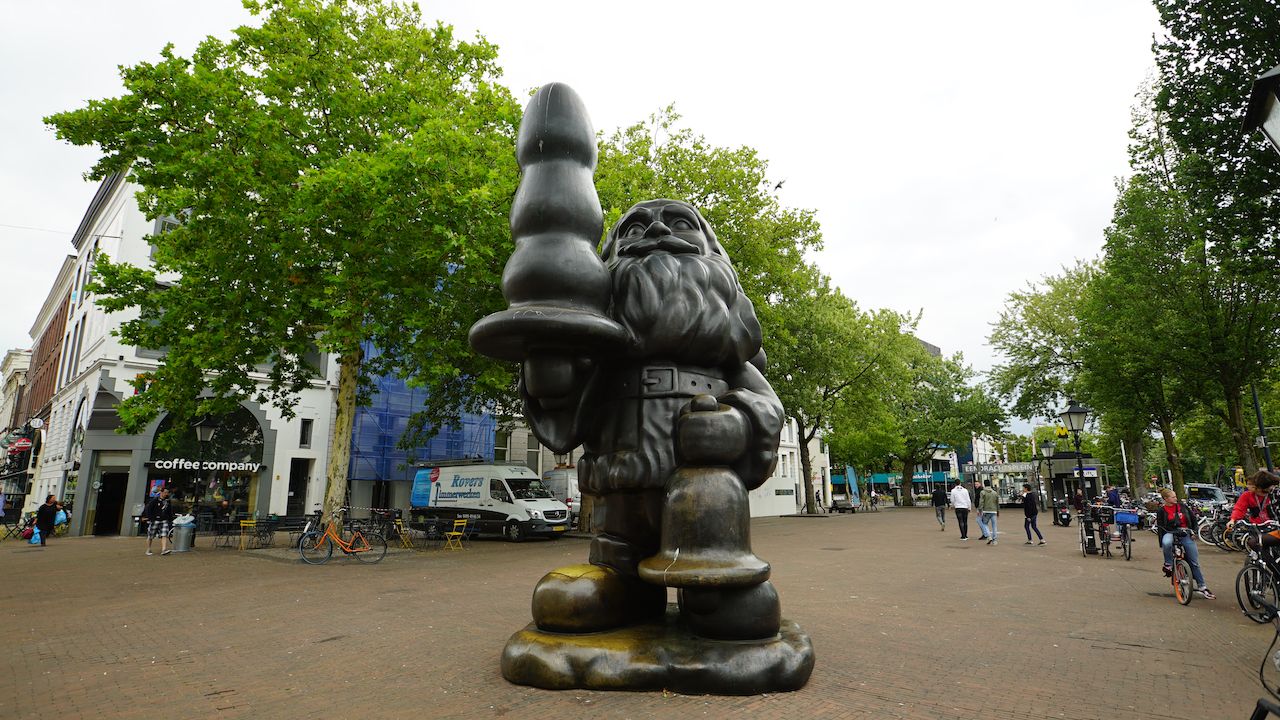 Before jumping on the train back to Amsterdam, snap a selfie with Kabouter Buttplug — buttplug gnome, and yes, you read that correctly. This statue should have been of Santa Claus but became famous because it looks like he’s holding something else other than a Christmas tree… Rumour has it that the artist did that on purpose.

CultureWhat You Should and Shouldn’t Do in Amsterdam’s Red-Light District
Tagged
Travel Trip Planning
What did you think of this story?
Meh
Good
Awesome

Hilton’s Vallarta Riviera Will Change Your Mind About Booking All-Inclusives
I’m a Professional Road Tripper. Here’s What I Never Leave Home Without.
Touring Hawaii by Train Is an Unexpected and Fun Way To See the Rainbow State
These Stunning Cabins Are the Ultimate Zion National Park Basecamp
How To Make the Most of a Weekend Trip To the Catskills on a Budget