Anyone who’s ever binge-eaten their way through a breakup knows that fried chicken can be used for emotional support. And anyone who’s been on a plane — or read the news — in the past couple years knows that using emotional instability as an excuse to get an animal on the plane for free isn’t exactly novel either. But combining both to allow a three-piece order of chicken to bring some spicy, greasy zen to the frantic and terrifying holiday travel season? Absolute brilliance.

So hats off to Popeyes Louisiana Kitchen, a fast-food chicken chain known to anyone who’s passed one in an Uber at 3:00 AM. This week, Popeyes introduced its new Emotional Support Fried Chicken to passengers at Philadelphia International Airport. A city — if you saw any post-Super Bowl videos — in desperate need of emotional support.

The new Emotional Support Chicken meal consists of three chicken tenders — soft and warm unlike harsh, bone-filled chicken — served in a paper carton that looks suspiciously like a real chicken. 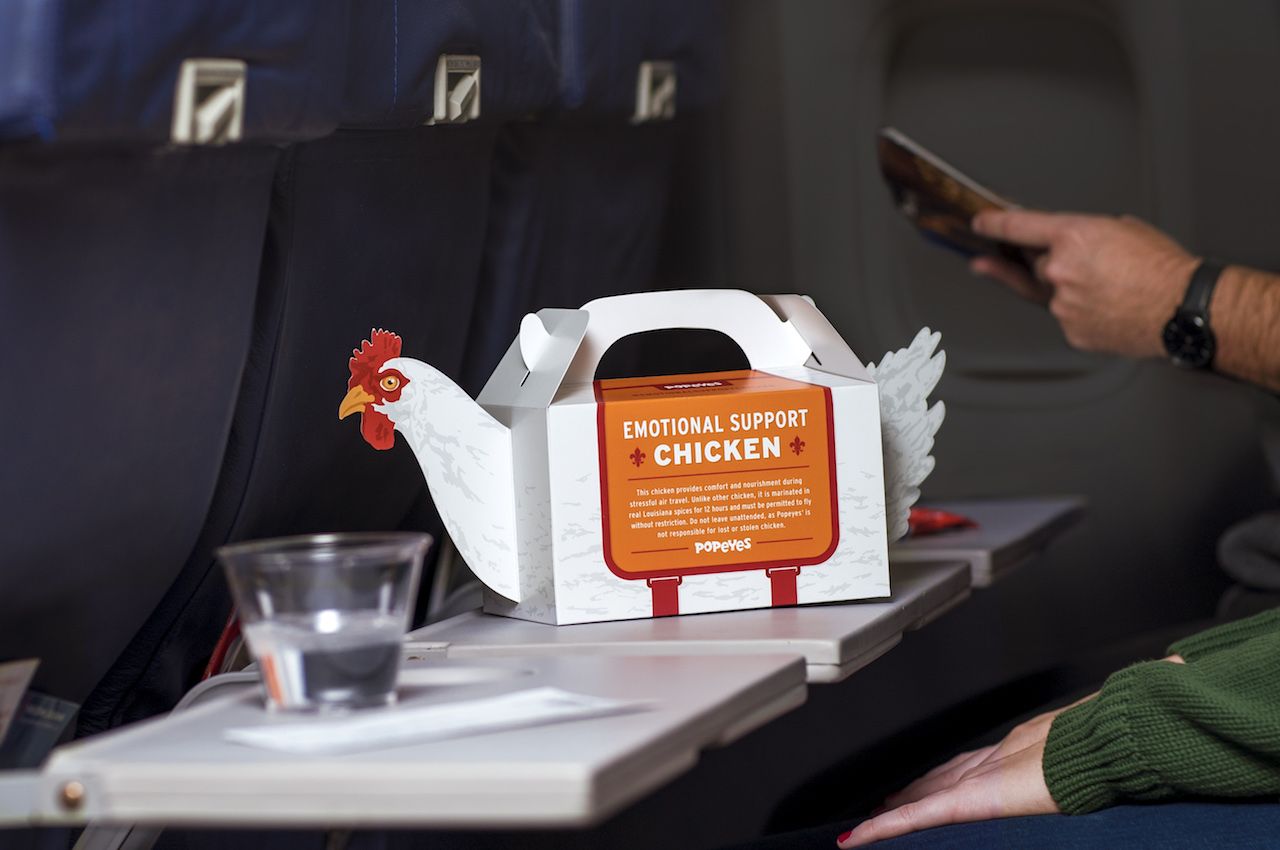 In a press release, Popeyes said:

“Emotional support animals provide comfort and companionship, especially during a highly stressful time like air travel, but…some travelers are pushing the envelope with…peacocks, squirrels, and tarantulas. After seeing this, Popeyes decided to offer…Emotional Support Chicken — a gesture designed to bring holiday travelers some needed humor to what is one of the most stressful places to be during the holidays — the airport.”

They added that airlines, as of yet, have no restrictions on Emotional Support Chicken.

The meals will be available only at PHL’s Terminal C, and Popeyes didn’t specify if it had plans to make the rest of the country feel good too.

Though this move isn’t expected to deter anyone from claiming their Chihuahua as an emotional support animal this Christmas so they can bring it home for free, at least it’ll make deciding what to eat if you’re stressed out in Philadelphia a little easier. And maybe even make those post-holiday breakups a little easier to stomach.

Food + DrinkThe 9 Coolest Fast-Food Locations Around the World
Tagged
Airports + Flying News Travel
What did you think of this story?
Meh
Good
Awesome