The journey northward from the promontory of Sagres, Portugal, at the southwestern tip of Europe, takes you past lonely sand coves etched into 200-foot earthen cliffs and mile-wide beaches with no edifices save a single, inviting restaurant. Most man-made structures are found only inland, where tiny, whitewashed towns with cobbled streets and a handful of small farms dot a protected area full of endemic wildlife.

National parks make up the majority of Portugal’s southern coastline and construction is limited. The biggest of these protected areas is the 346-square mile Southwest Alentejo and Costa Vicentina Natural Park, half of which lies in the Algarve – a region of Portugal more typically associated with high-rise hotels and overdevelopment.

The Algarve is one of Portugal’s five mainland provinces, and it’s over-built only on a swath of its southern edge, where warm, calm waters lap busy beaches. On its western coast, the other Algarve looks out onto chillier, powerful Atlantic swells. Long known primarily to surfers, the charms of that wilder and emptier Algarve are slowly getting more attention.

“It’s like a gift to have something like this,” says Maxime Vels when talking about the national park that makes up the western Algarve. Vels is a French surfer who moved with his young family six years ago to this region, a place he called “a diamond of Europe.”

There are four main places you can base yourself as you explore the other side of Algarve. Each of allows plenty of beaching, hiking, and other ways to savor the natural environs. 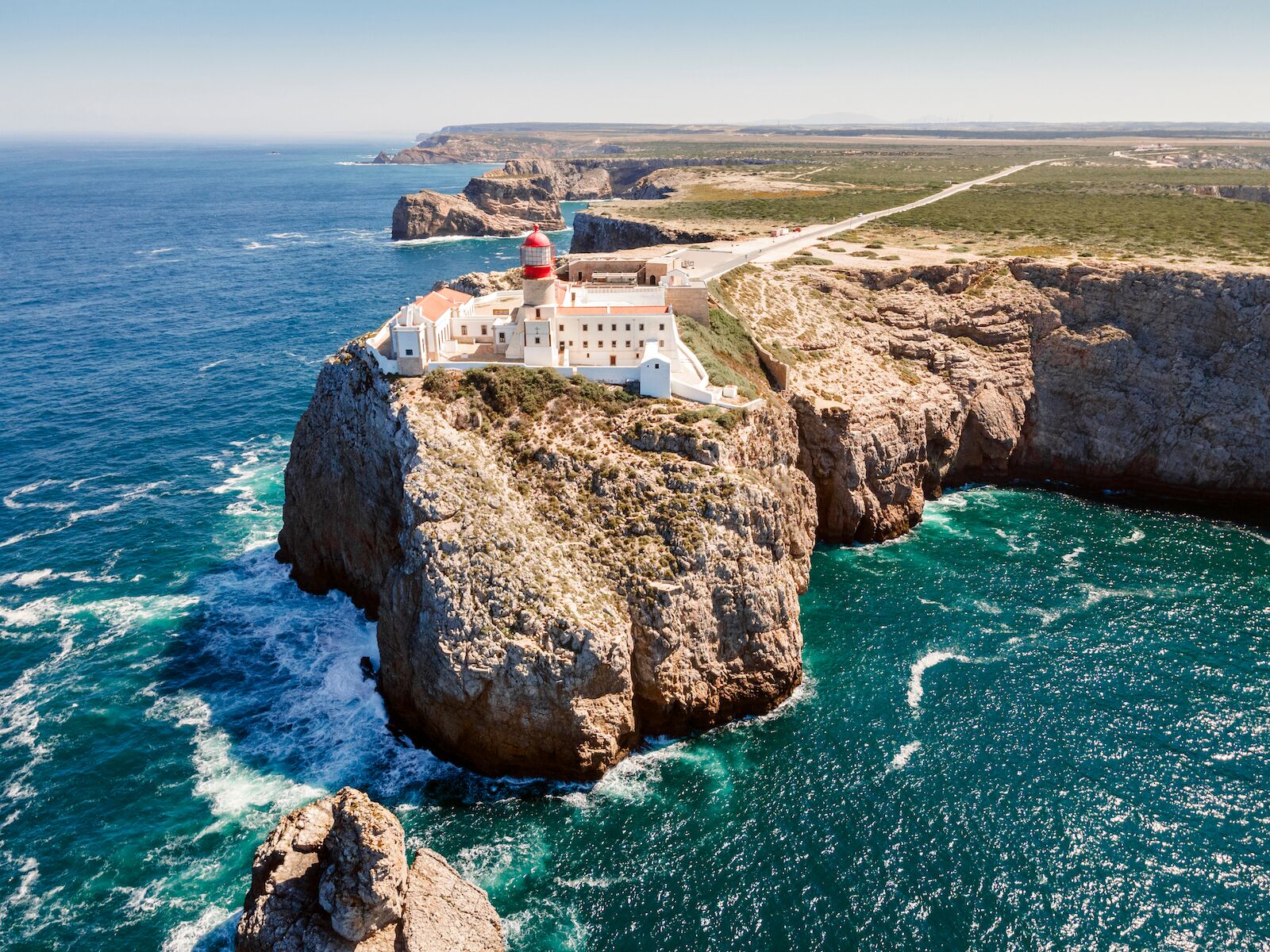 Sagres marks the southern end of western Algarve. The Sagres Promontory and the Cape of St. Vincent offered a wealth of things to see, among them the ruins of a 16th-century fort, a church from the same era, and a lighthouse. Legend has it that Henry the Navigator – a name later given to the Portuguese prince who inspired his country’s Age of Discoveries – met with cartographers and planned his explorations of Africa in this area.

While it’s likelier that Henry held his meeting in a location due east, it’s still fun to picture Prince Henrique standing atop the promontory, surveying the wild seas, and determining that what lay beyond could be reached and explored. A walk out to the Sagres lookout promises not just a lot of wind and historic contemplation, but also incredible vistas.

If you look back and down, you’ll see a more modern scene at Tonal Beach far below: a collection of colorful beach towels and plenty of surfers out in the water. Sagres is one of the best surf areas in Portugal, and Tonal Beach is a prime wave-catching spot. As at many of the beaches here, the heart-stopping trek down the cliff to the sand is both long and worth it. This is a stunning stretch of coast you don’t need to be a surfer to appreciate.

Given its dizzyingly high bluffs and the vistas they offer, Sagres is a super place to hike. While you walk, you can take in the wildlife that thrives within this protected zone. The Sagres Birdwatching Festival, scheduled in October for 2022, is a testament to the varied birdlife. From the sinuous, red-beaked black storks to the icy-eyed northern Gannet, over 200 bird species can be spotted here.

Where to stay in Sagres: Since Sagres is the most developed of the four western Algarve areas, accommodations are easy to find. The most notable, and expensive, of these is the Pousada Sagres. Pousadas are hotels in historic or luxury locations that were once run by the government, but are now part of the privately owned, and well operated, Pestana Pousadas. Since Sagres is still relatively busy for anyone looking for a remote experience, you can take in the promontory, grab lunch at Bossa Brew House, and then head north. Another option is the Sagres outpost of Arte Bianca, which was started in Aljezur by an expat Italian. 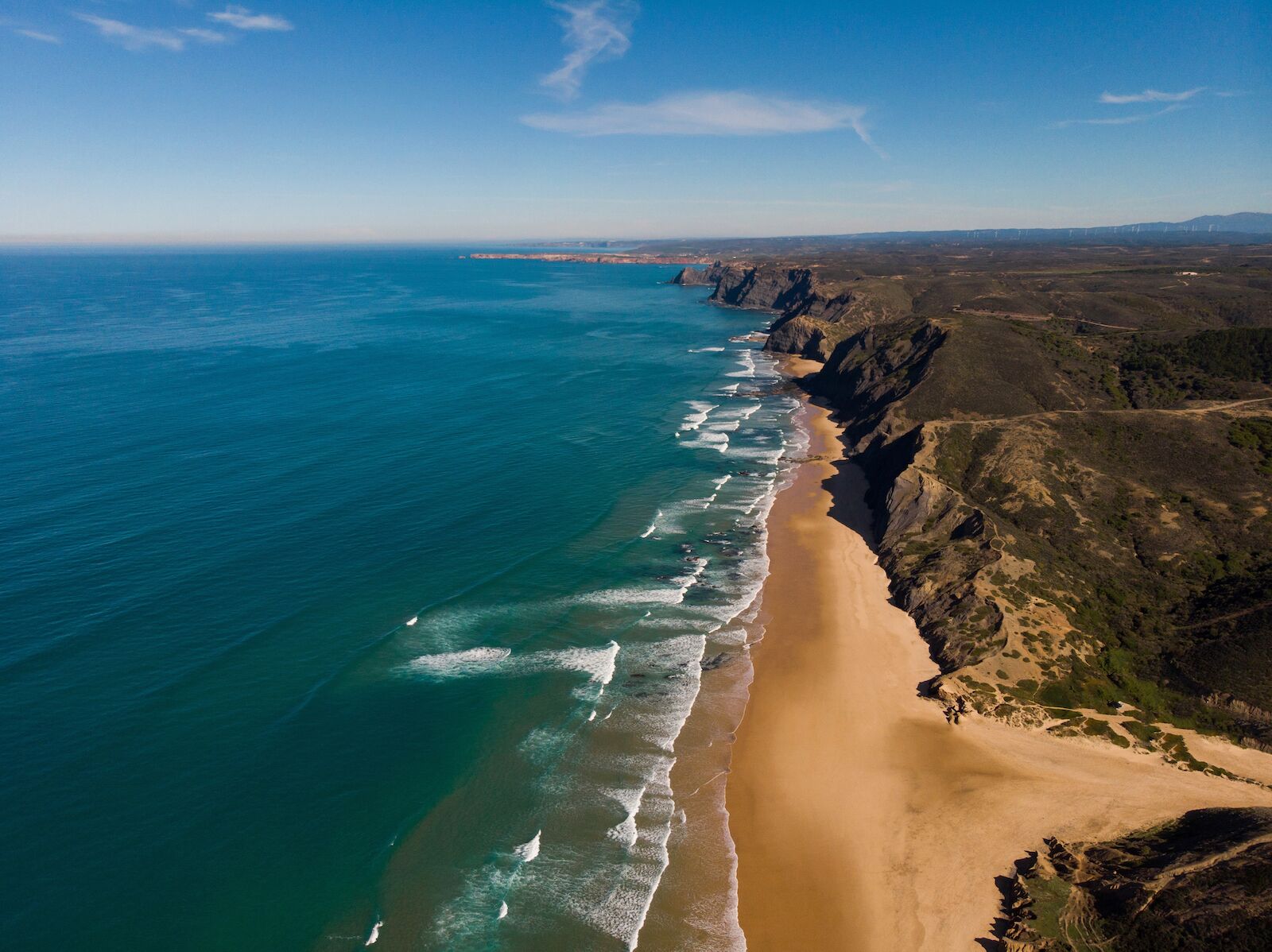 Over two decades ago, northern Europeans started coming to Vila do Bispot to live cheaply and surf. Some never left. When I first visited the area years ago, it struck me as a laid-back, bohemian surf town. The word I’ve heard used to describe the vibe here is “hippie,” which in Portuguese is more of an adjective than a noun.

The surf shops have a chill attitude and you’ll find plenty of vegetarian options at restaurants around here, like Izzy’s Market. You’ll also find vast beaches with a sense of remoteness that seems improbable for somewhere a mere three hours from Lisbon. One of those expansive beaches is Praia da Cordoama. At its south end across the rocks, a smaller beach, Praia do Castelejo, has tall cliffs, roaring surf, and one excellent spot for a fresh fish lunch. For its part, Amado Beach is a great place for beginning surfers at its south end (at least in summer, when swells are smaller) and for families at the calmer north end.

In between Cordoama and Amado are tiny beach nooks like Praia do Mirouço and Praia da Pena that you can reach on dirt roads. These slivers of sand backed by towering bluffs are some of the most memorable beaches you’ll see in Europe — or anywhere, really. Just beware the tides before you go, since these sandy hideaways get even smaller as the tide comes up.

If you prefer, you can look at these beaches from on high on a six- or nine-mile loop that is one of the many hiking trails in the area.

Where to stay in Vila do Bispo: A good place to stay here is Aldeia da Pedralva, which has seven basic cottages to rent. The on-site restaurant Sitio da Pedralva is also worth a visit. 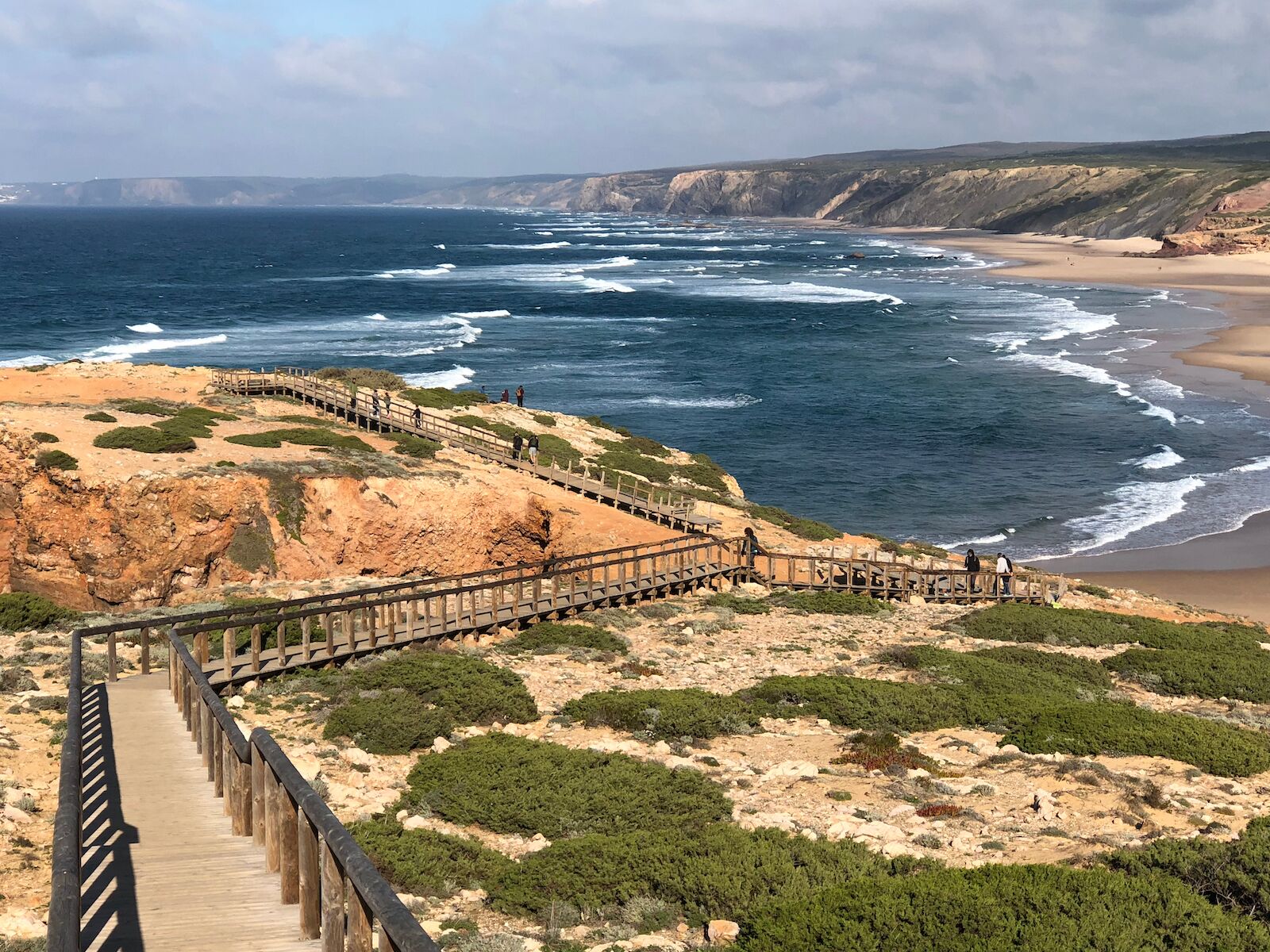 This is the hottest new area in the western Algarve. It’s here that French surfer Vels moved with his family years ago. His kids attend a public school that now has 37 nationalities, according to Susana Otão, a Portuguese journalist who moved to the area from Lisbon with her family seven years ago and now sits on the city council.

After they drop their kids at school in Aljezur town, folks stop for a coffee at KOYO Specialty Coffees, a roastery and café that Hungarian Gyula Ellaes opened in 2020. Ellaes says that unlike earlier “hippie” transplants, the latest arrivals appreciate high-quality coffee and will pay €1.20 (about $1.25) for an espresso.

While they send their kids to school in Aljezur town, Ellaes, Vels, and Otão live in Vale da Telha, another whitewashed town lying between Aljezur town and Arrifana Beach. On the hillside above Arrifana Beach, a few new white houses are visible; this is one of the few places north of Vale do Bispo where you find homes with ocean views.

Along with Praia Arrifana, Praia da Bordeira is the top surf spot here. That said, plenty of folks choose to live here for reasons other than surfing, a trend that accelerated during the pandemic. They want a place that is cheaper and less fast paced than the big cities they left.

They’ve fueled a boom in new restaurants like Varzea and O Paulo, which is situated atop a breathtaking rocky bluff. When you visit, you can eat there or enjoy a pizza outdoors at Arte Bianca’s Arrifana location.

Where to stay in Aljezur: Stay cool by choosing lodging in Arrifana, since it lies over the water. Surfers may want to stay at the Arrifana Surf Lodge, while families can rent a tiny cottage from Casas do Mar. 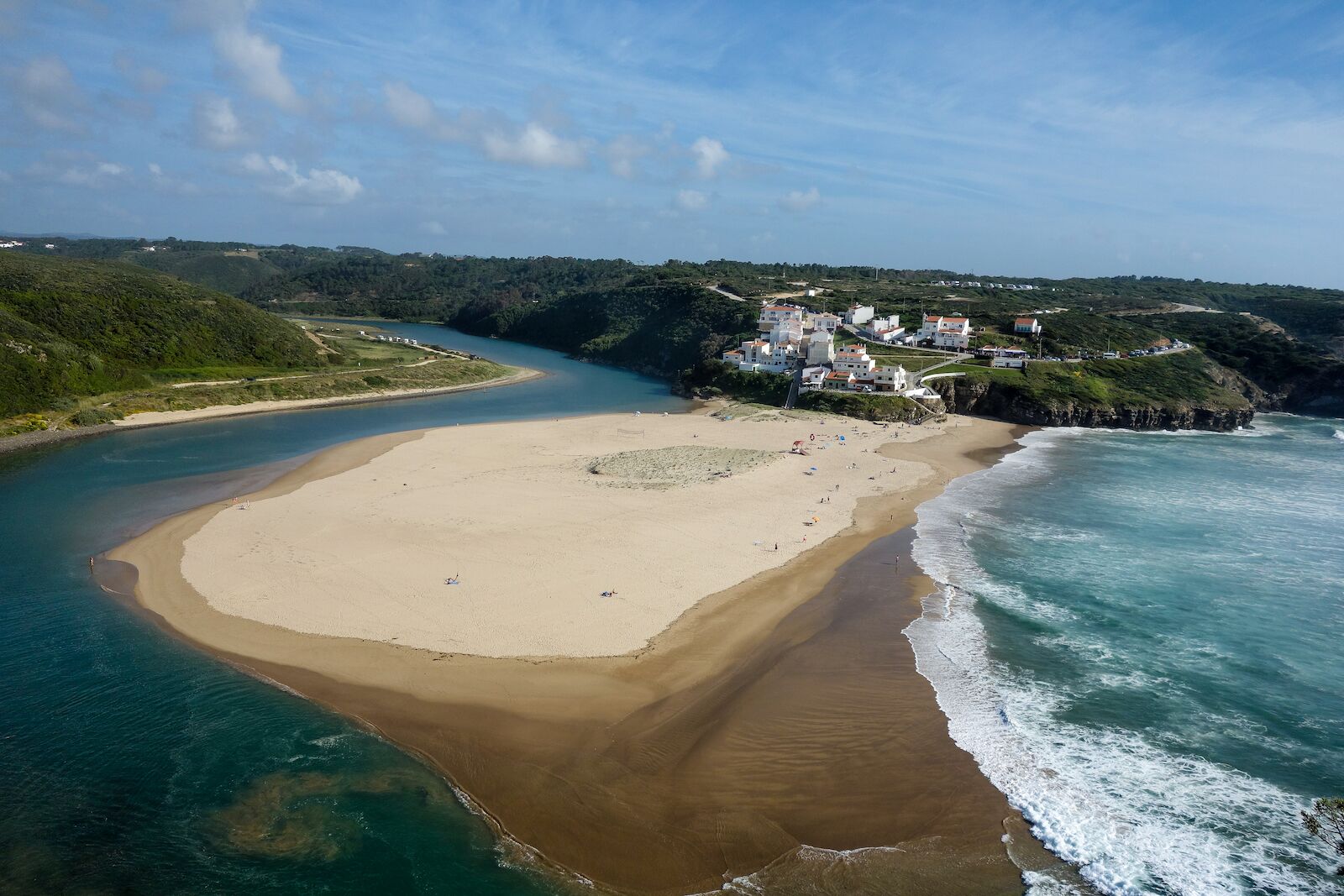 The disarmingly small town of Odeceixe lies at the northern edge of Algarve province. At any time of day, you’ll see lots of hikers with backpacks and groups of cyclists coming through here, as it’s a popular place to explore on two feet or two wheels. The 15 kilometer (about nine mile) Odeceixe ao Mar walking route follows the south side of the Seixe River on its way to the ample Odeceixe Beach, then travels south along the craggy coastline before looping back around the interior.

Odeceixe Beach is another ample stretch of shoreline, with surf breaks for all levels – although reading a book on the sand is an equally alluring option. The north end has a no-frills cafe with a nice view and outdoor tables, but not much else. Your better choice for lunch is Bar da Praia on the south end. In Odeceixe itself, Assador Altinho is the place to eat. Casa Verde works for a coffee or breakfast on the plaza.

Where to stay in Odeceixe: Those doing longer treks overnight often stay in inexpensive places like the €70 (about $74) per night Residência do Parque. Folks coming for longer may opt to rent a tiny Quinta Azul house across the Seixe River. If you want more upscale accommodations, you’ll have to leave town. Monte do Cardal is an inviting country hotel with rustic furnishings and good food. It also has a beautiful pool. Then again, stunning beaches are just a short drive away.

TravelThe Best Place To Go in Portugal for Every Type of Traveler
Tagged
Beaches and Islands Travel Portugal
What did you think of this story?
Meh
Good
Awesome