Reasons to visit Portugal are innumerable. Some are obvious, like the world-class wines sold at local groceries for little more than the cost of a tram ticket in Lisbon; others are lesser-known, like the country’s wealth of stunning libraries and the places in Porto and Coimbra that inspired details in Harry Potter. It’s hard to go wrong in one of the safest, oldest, and most scenic countries in Europe, but certain travelers are undoubtedly better suited to certain spots. Here are the top places in Portugal for every type of traver. 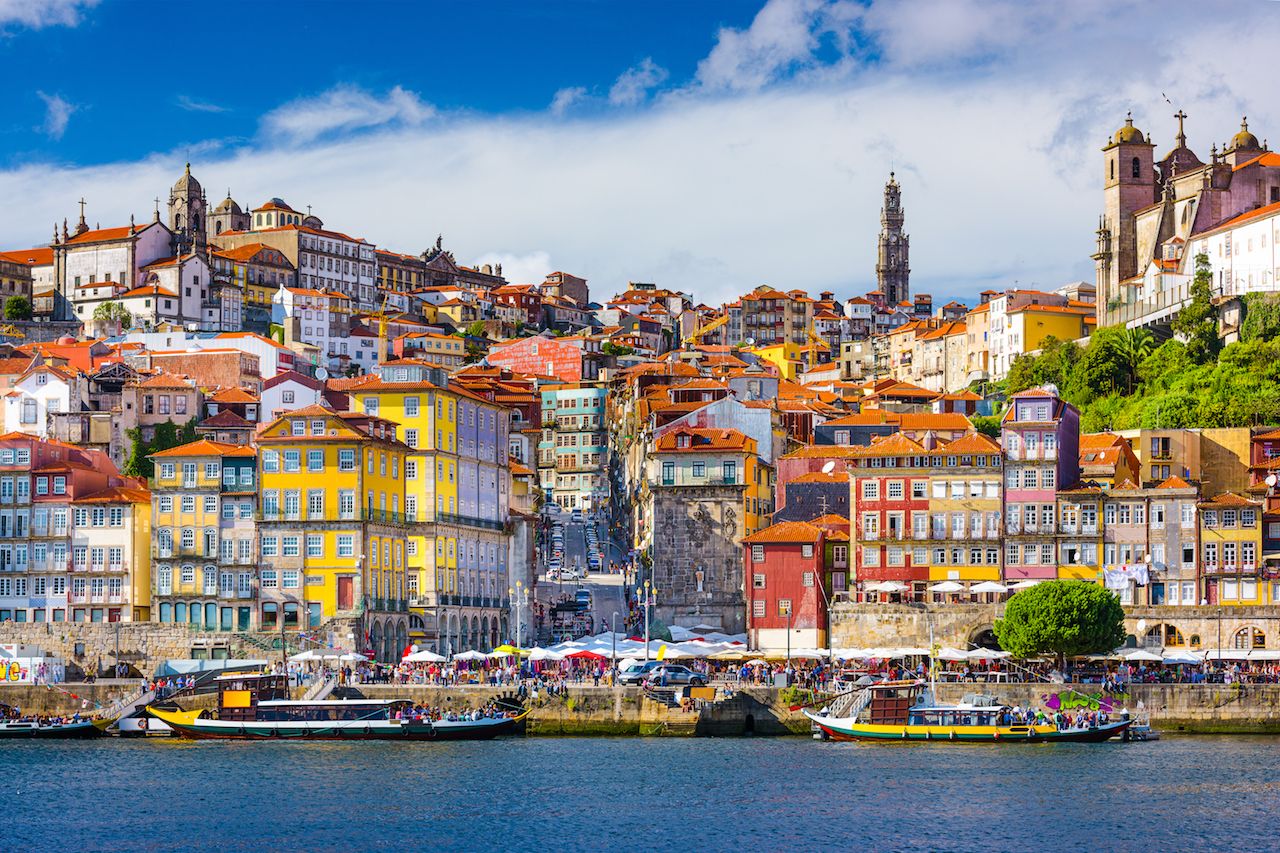 Both the Portuguese capital and second city are fantastic for solo travelers, but even the Lisboetas will tell you that the people of Porto are as friendly as they come. The beautiful city on the banks of the Douro River has a slightly calmer pace than Lisbon with the perfect mix of culture, nightlife, and cuisine to make any solo traveler feel at home.

English is pretty widely spoken, and younger locals are almost always up to chat, so getting around and meeting new people are a cinch. People watch over a glass of tawny port; chow down on a franceschina, a gut-busting local sandwich stuffed with meats, covered in melted cheese, and slathered in tomato-beer sauce; and take in the alleys adorned with street art. You’ll quickly see why Porto has been giving Lisbon a run for its euros. 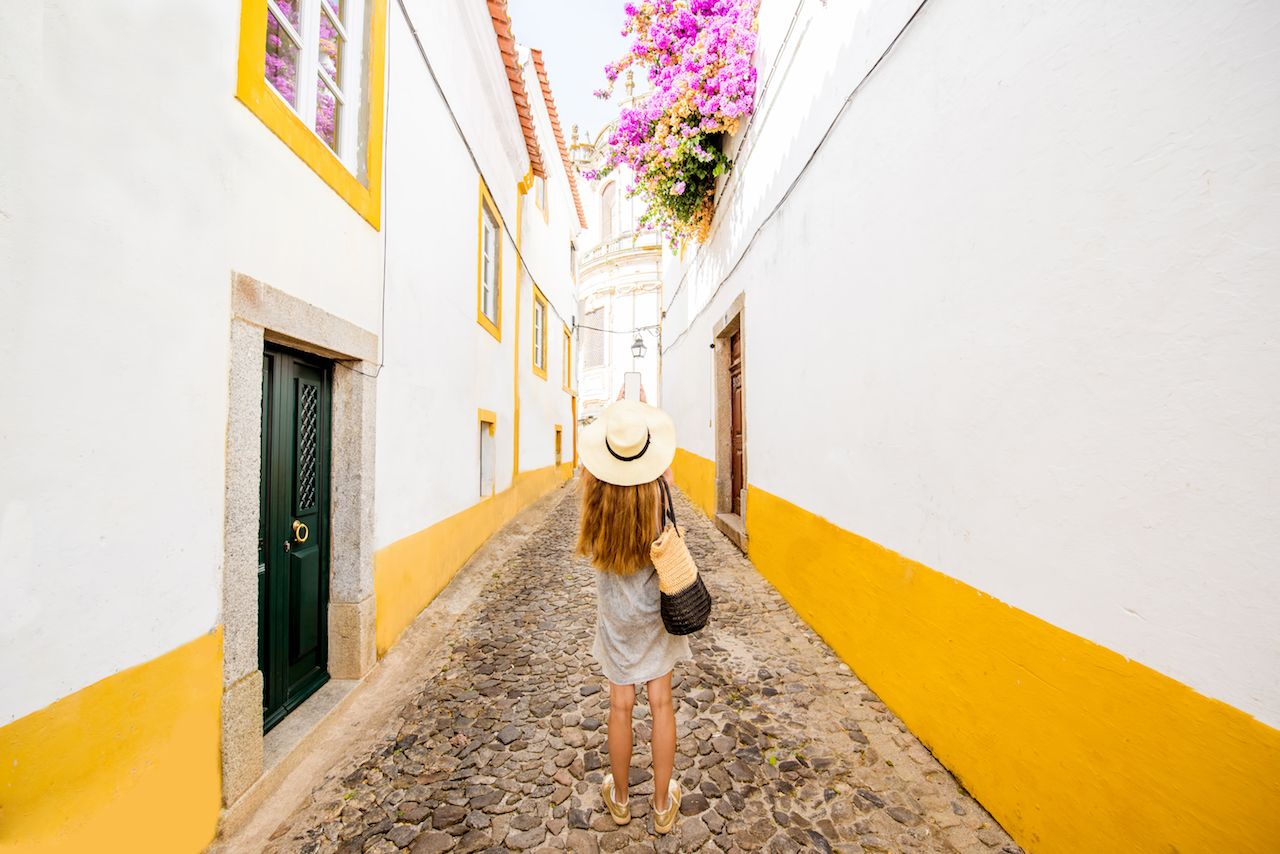 Good grub is hard to avoid in Portugal, from the succulent seafood down south to the heartier fare up north. Still, the Alentejo region stands out as the culinary superstar. Base yourself in warm, medieval Évora about an hour and a half east of Lisbon for a balance of great eats and sights to see between meals.

Pair local wine with marinated pork from acorn-fed pigs, the best of the national salt cod dish bacalhau, and olive oil worth smuggling home in your carry-on. Then walk it all off at Roman temple ruins in the UNESCO-listed city center or scare yourself hungry again at the bone chapel. You’ll be happy as a clam (also on the menu) if you can handle a good dose of garlic and have been searching for creamy European cheeses that can upstage brie. 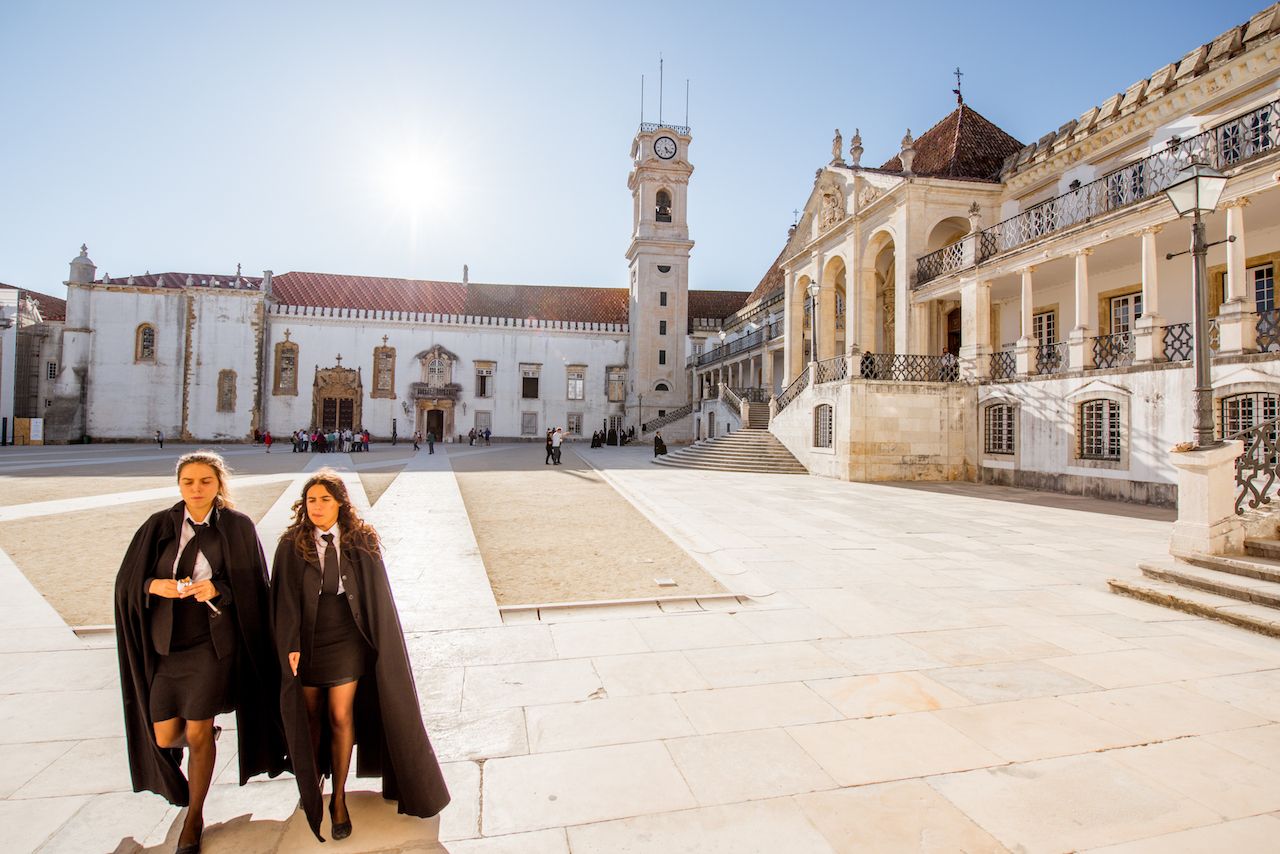 Coimbra is Portugal’s most famous student city thanks to its university, the nation’s oldest and most distinguished. It’s less visited than Porto and Lisbon, so the prices haven’t been driven up as dramatically, and the lively city is especially energetic when school is in session. Budget travelers can choose between quietish nights soundtracked by Fado music or a bar scene that spills out into the streets until the early morning. Hostels blend in with historic sites, festivals are thrown throughout the year, and there’s an endless supply of casual, delicious dining guaranteed to keep both your stomach and wallet full. 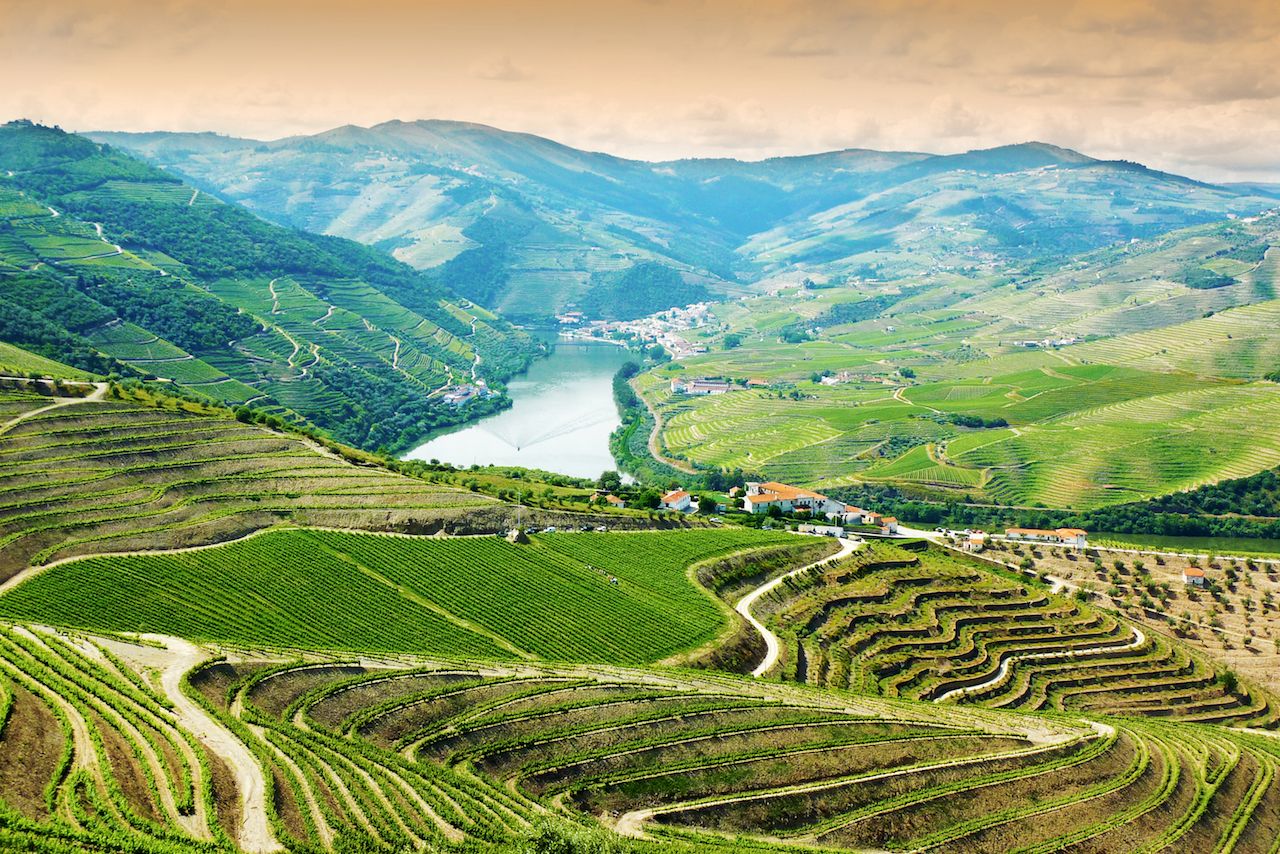 Most think of Porto when they hear Douro, the city on the Douro River famous for its fortified port wine. But there’s a great big UNESCO-listed wine region, one of the world’s oldest, outside of Portugal’s second city, and it deserves a visit unto itself. Not just for lovers of sweet, dessert-like wines, the Douro Valley has been upping its table-wine game in recent years. Its terraced, well-manicured vineyards dotted with quintas, or estates, will make you blush, but that might just be the work of the tinta barroca grapes. It’s worth a few days of sampling the region’s ports and reds and driving its winding, mountain-cut roads — just not in that order. 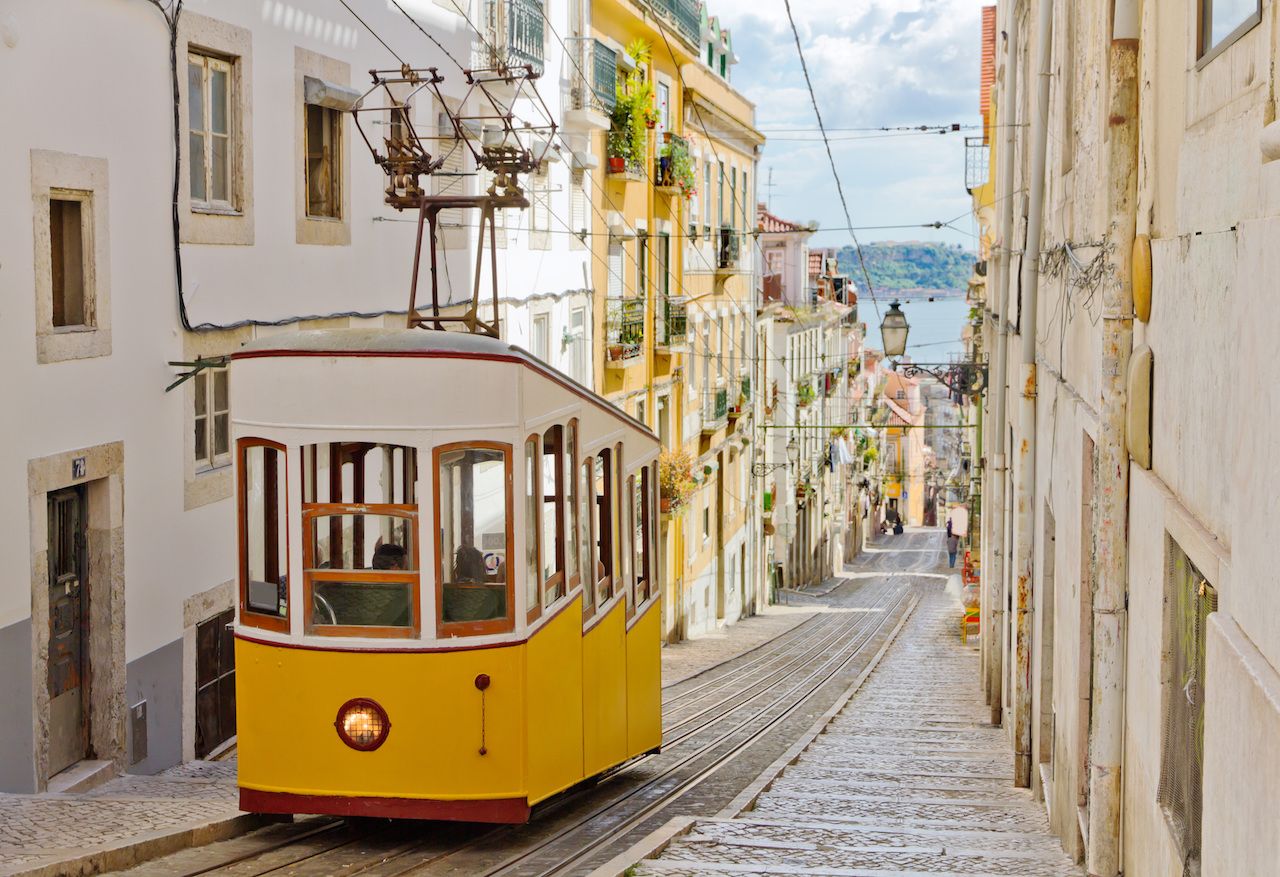 The worst thing about Lisbon is the overwhelming number of travelers it sees these days. The best thing is everything else. Many are so dazzled that they decide to stay awhile, so the Portuguese capital is a prime spot for digital nomads and other long-term travelers.

It has tons of coworking spaces; an abundance of central Airbnbs, albeit at a higher price point than a few years ago; and a laptop-friendly coffee-shop scene. Plus there’s everything from unstoppable nightlife in Bairro Alto and enduring Fado music in Alfama to nearby surf spots and killer petiscos (small bites similar to Spanish tapas, just don’t let the locals hear you make the comparison) to keep you busy. For a less touristy and more affordable experience, consider securing a spot in the South Bay, a quick 10-minute ferry across the Tagus. 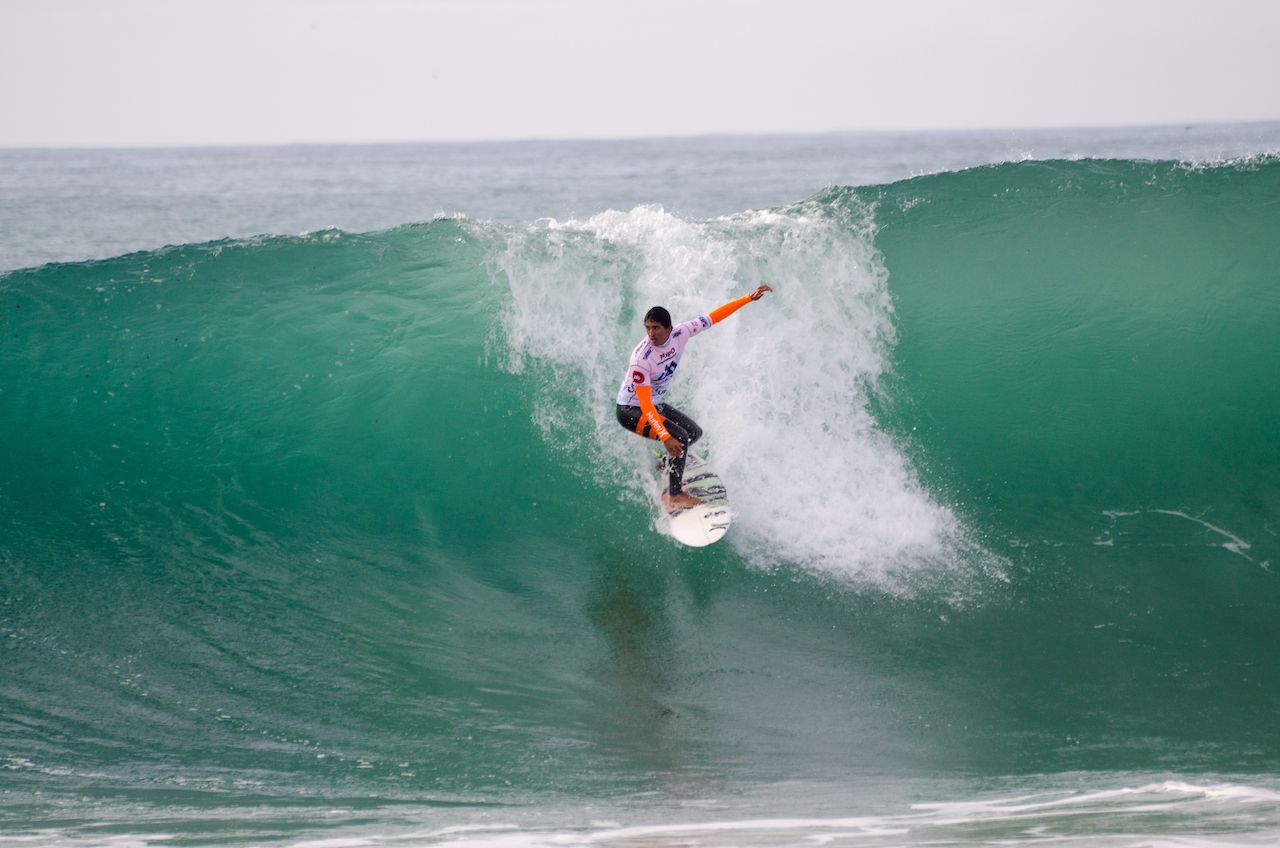 Surfing is the big pastime in Peniche, a small fishing town with huge waves and reliable breaks halfway down the coast. Medão Grande Beach has some of the best surfing on the continent — some call its top wave, Supertubos, the “European Pipeline” — and hosts competitions like the MEO Rip Curl Pro Portugal every year. Windsurfing, kite surfing, and bodyboarding are equally popular in Peniche. A 30-minute boat ride away is the Berlengas Islands Nature Reserve where you’ll also find some decent diving, including wrecks and walls.

For the best nightlife: Albufeira or Portimão 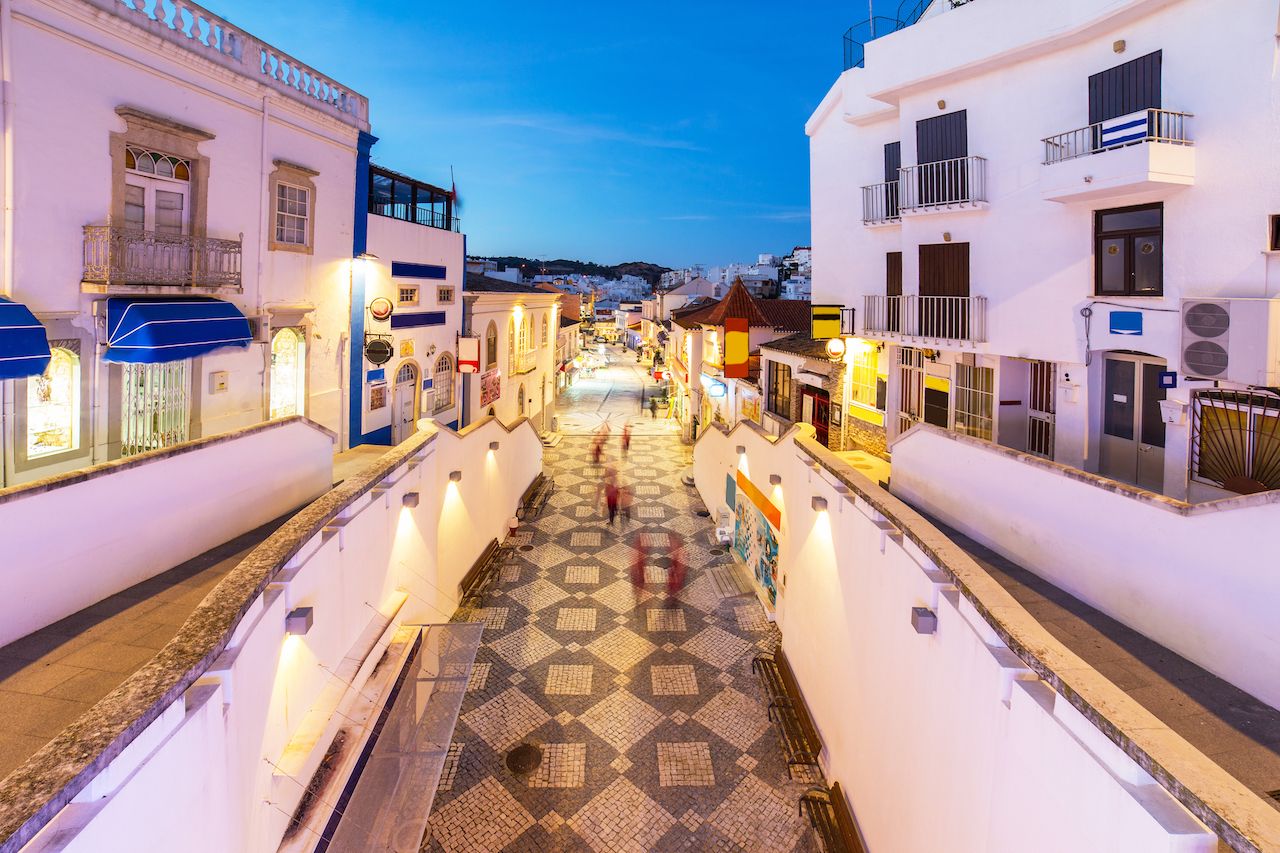 Famous for its sunny beach days, much of the Algarve region in southern Portugal turns into a drinking and dancing hub after dark, popular with younger travelers looking to let off some steam spring-break style. Albufeira is a top choice for Brits on stag and hen dos, bachelor and bachelorette parties, which pretty much says it all. There’s a variety of accommodations for the rare, sleepy hours you’ll find yourself not sunbathing or dancing on tabletops at the club.

If you like late nights and good vibes but aren’t interested in mini Ibiza, opt for Portimão instead. Here, you’ll hunker down on the long, golden sands of the Praia da Rocha and Três Irmãos beaches, then get the right amount of rowdy at bar crawls and beach parties, more subdued nightclubs, or even casino visits. In either place, drinks are dangerously cheap.

For romantic getaways: Sintra or Aveiro 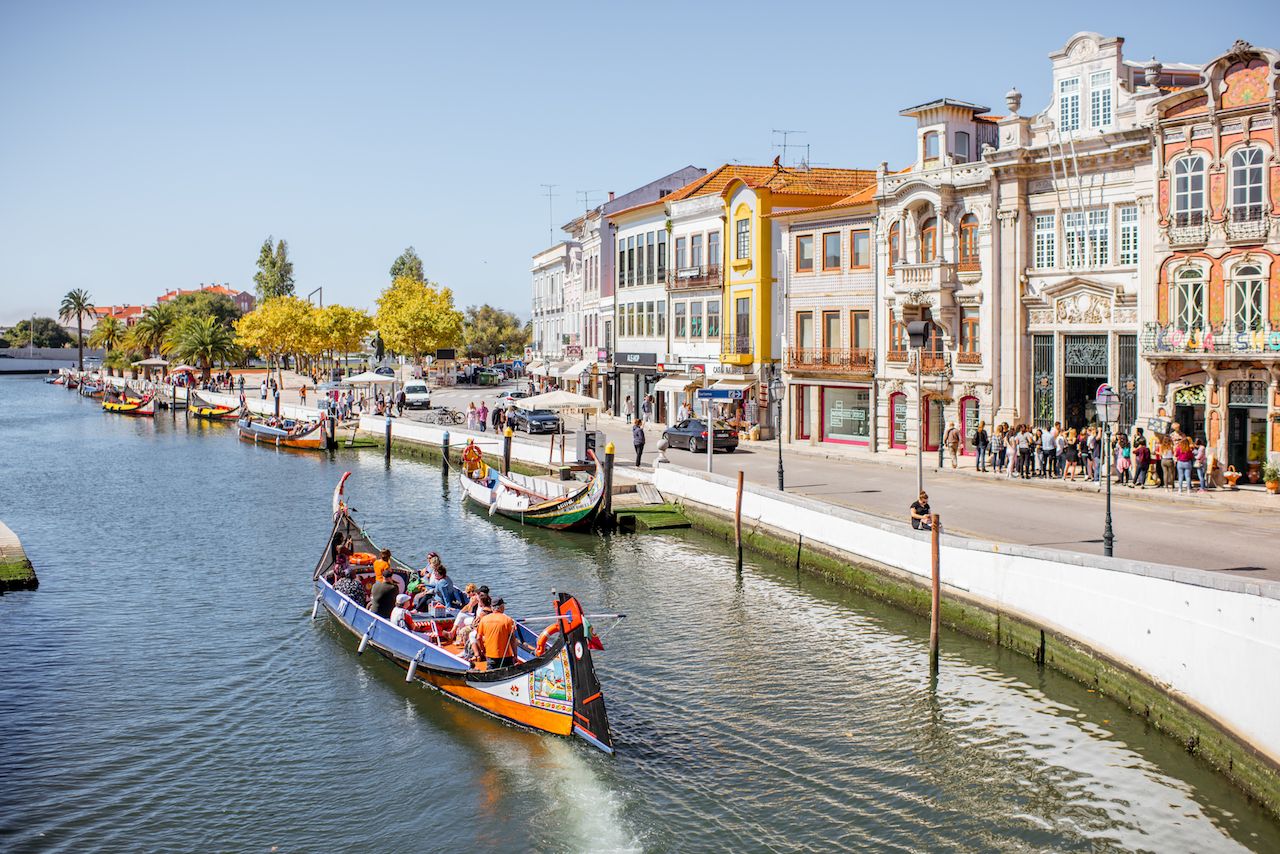 Sintra is a storybook town a little under an hour outside of Lisbon, making it a perfect day trip or weekend away for visiting couples. It’s dripping with charm from the cozy city center to the vivid red and yellow Pena Palace, aptly featuring romanticist architecture. Fill your day (or days) with visits to the garden-filled Quinta da Regaleira palace grounds, hilltop Castelo dos Mouros, and Moorish National Palace of Sintra. Later, venture out into the forested Sintra Mountains and Cabo da Roca, the westernmost point on mainland Portugal. Before you leave, be sure to split a few sweet, cheese-filled queijada pastries from the Piriquita bakery in town.

Aveiro is a laid-back city about an hour south of Porto. It’s often referred to as the “Venice of Portugal” because of its canal system, though the iconic boats here are long, colorfully painted vessels called moliceiros. Fall as in love with the city center as you are with your partner, flitting between Art Nouveau houses and historic religious sites, and hit the beach anytime.

For peace, quiet, and culture: Gerês Head north in Portugal for the chance to experience the country as it was before the tourist boom. Few travelers make it past Porto, so this scenic area filled with waterfalls, thermal springs, Roman ruins, and traditional villages on the Spanish border is ideal for a quiet, cultural retreat. What many locals refer to simply as Gerês is actually Peneda-Gerês National Park, the only national park in the country and a fantastic place to spend a few nights away from it all. 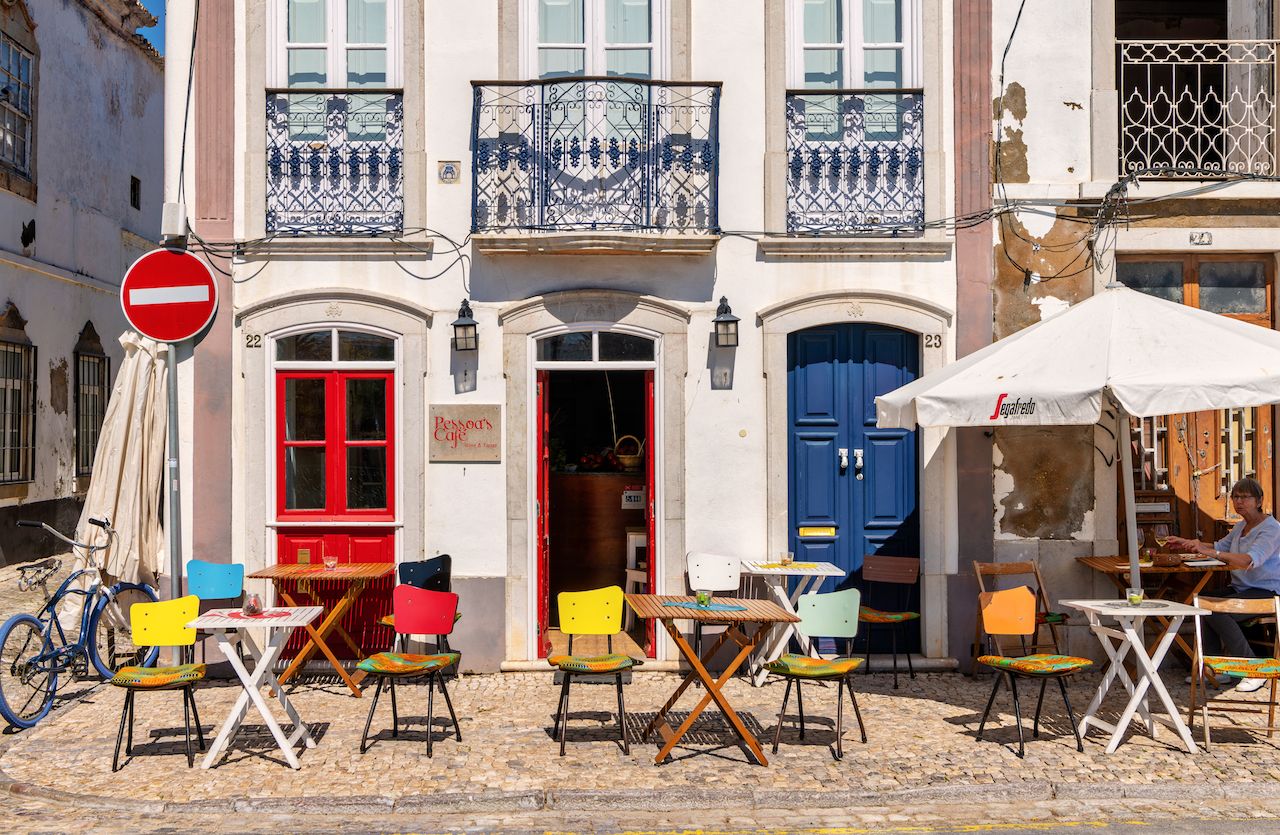 Tavira is a resort in the Algarve but one that’s managed to cling to its small-town roots and keep party hungry tourists at bay. The sandy stretches and warm, calm waters of Praia do Barril have long drawn vacationing families from Portugal and neighboring Spain. In town, you’ll discover white Moorish architecture lining cobblestone streets and more churches than hotels. Still, finding a nice accommodation, most likely a villa or guest house, without breaking the bank is hardly a challenge. 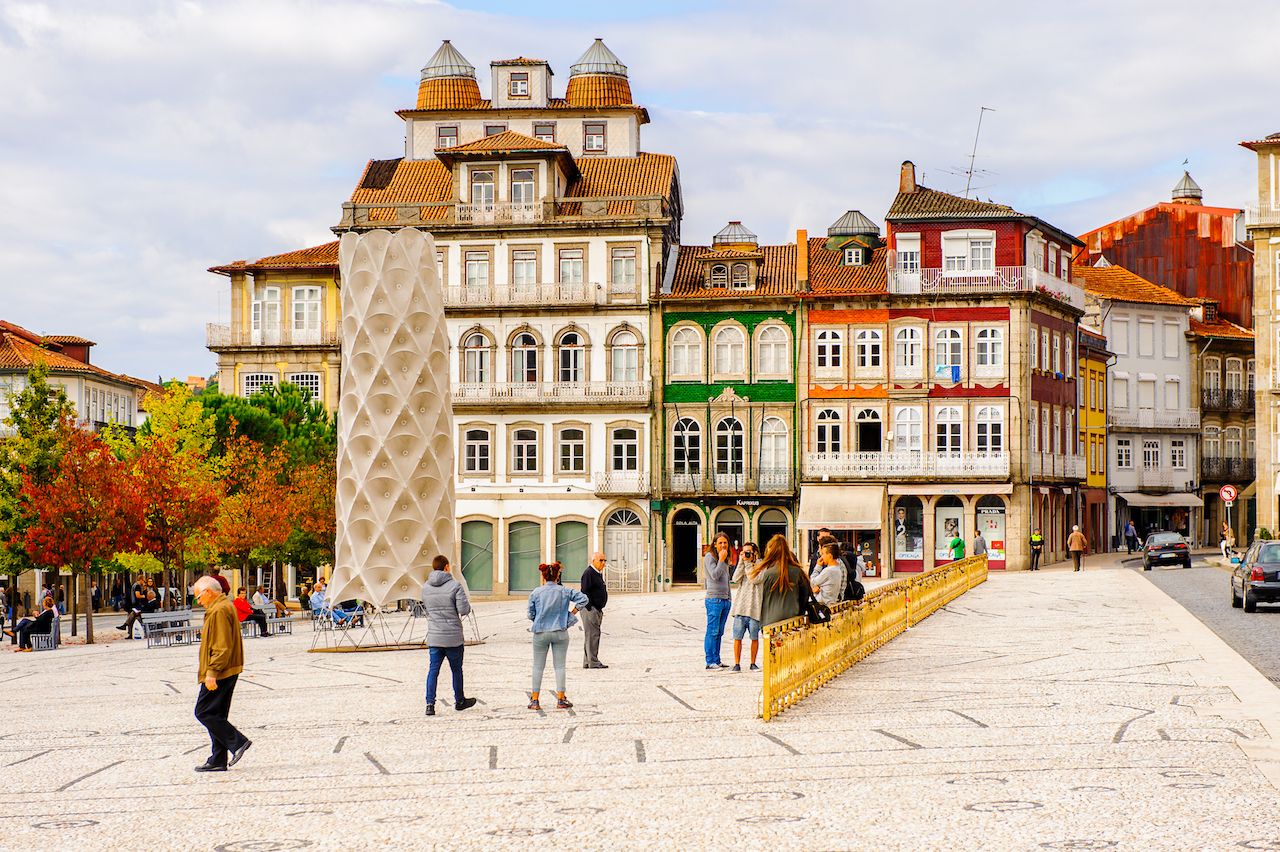 Guimarães was the birthplace of the first king of Portugal and is considered by many to be the cradle of the entire country. Evidently UNESCO agrees, having named it a World Heritage site in 2001 for its role in developing the Portuguese identity as its earliest capital in the 12th century. The historic town is made up of well-preserved architecture adorned in characteristic azulejo tiles dating back to the 15th century, from monasteries to mansions. 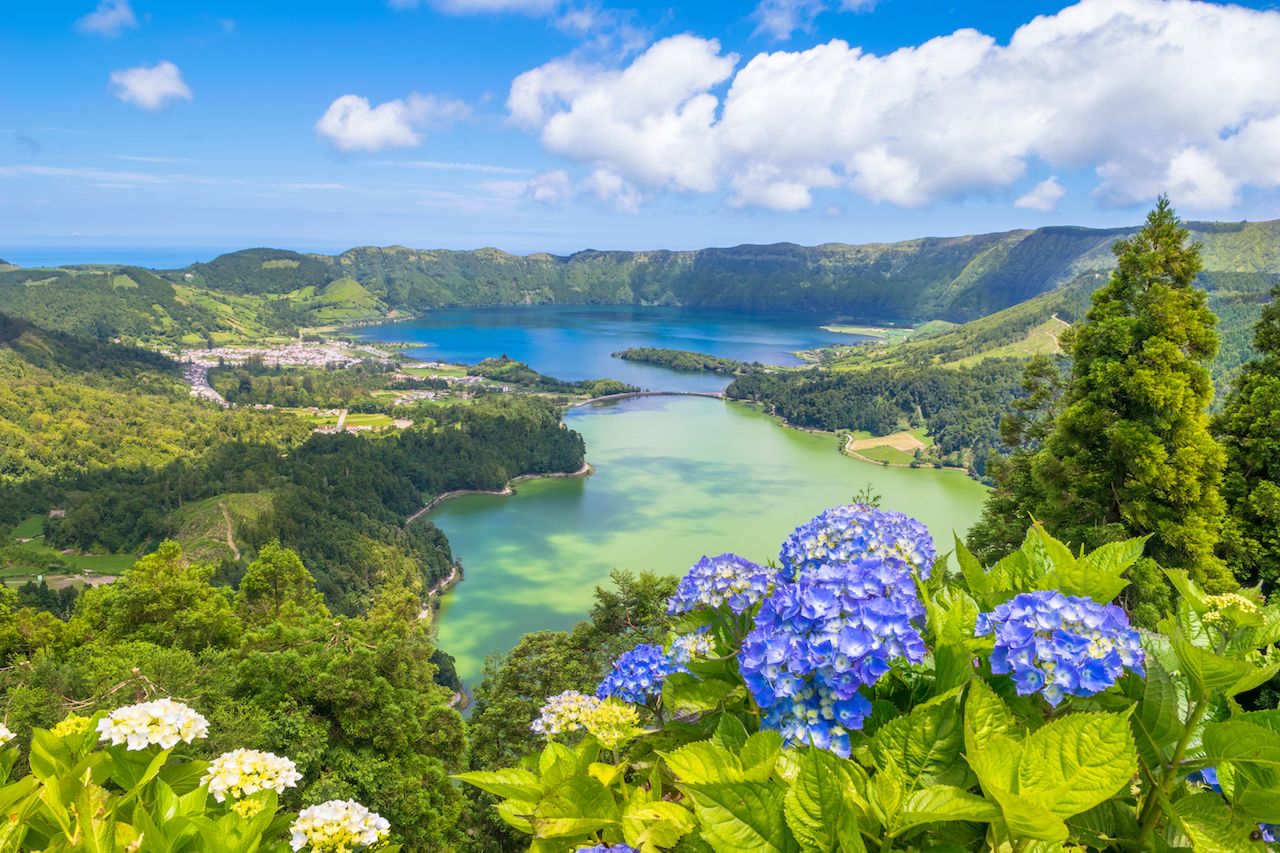 Rapidly growing in popularity, the nine-island archipelago in the mid-Atlantic known as the Azores is a dream for outdoorsy types and suckers for luxuriant scenery. São Miguel is the largest, most-developed island with an impressive number of lagoons and crater lakes, volcanoes to hike, caves to explore, and waterfalls and hot springs to soak in no matter your preferred temperature. Runner-up for the most traveled island is a three-way tie between Terceira, Pico, and Faial with Flores coming in as the underrated underdog.

When you aren’t knee deep in the outdoors, witness cultural events like the annual Holy Ghost Festival or weekly running with the bulls depending on your island of choice. Keep your energy up with regional stews and smoked sausages or go light with freshly caught seafood like mackerel and octopus. Just remember to save room for the insanely sweet local desserts.

Food + Drink7 pastries worth traveling to Portugal for
Tagged
Travel Trip Planning Portugal
What did you think of this story?
Meh
Good
Awesome