“Take me back to summer 2020” won’t be a caption surfacing on Instagram any time soon. If the winter is a long, barren highway, Memorial Day is the welcome sign telling us we’ve finally reached our destination. This year, that destination looks more like Death Valley than Punta Cana. The landscape of our summer travel season looks quite different right now, and most of us are eager to push the fast-forward button to the summer of 2021. But you might not have to go quite that far into the future to salvage your summer vacation.

Hopefully, the global health situation will be much improved by this fall and winter, travel will be safer, and most destinations will have reopened their borders to tourism. In the Southern Hemisphere, summer starts in December. That means beach trips, camping weekends, backyard BBQs, and other warm-weather excursions we don’t have to wait a whole year for. Whether it’s a South African safari or an island getaway in Bali, you can redo summer 2020 this winter in these Southern Hemisphere destinations. 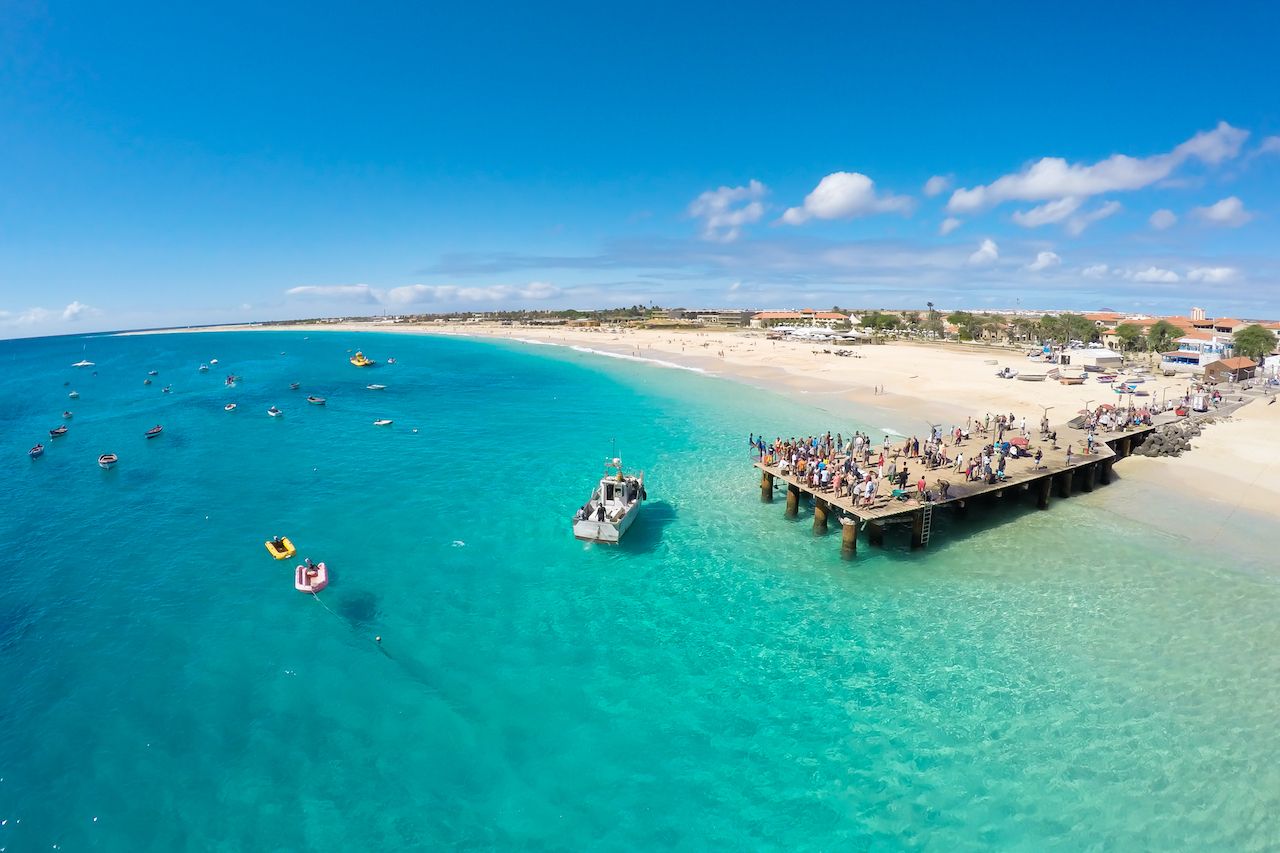 When the weather starts getting cold, a light seems to go off in people’s heads telling them to book a trip to Mexico. If a trip to Playa del Carmen is your typical winter getaway, consider taking a break from the packed beaches and resort communities and going somewhere different. A trip to Cabo Verde is the ultimate warm-weather beach getaway, without the crowds that plague more popular (and accessible) destinations.

Located in the mid-Atlantic, off the coast of western Africa, Cabo Verde is a collection of volcanic islands not unlike the Canaries. The islands are home to miles of white beaches, and surf that rivals Hawaii and Puerto Rico. If that’s not enticing enough, the average January temperature is 77 degrees.

You’ll have a dramatically different experience depending on which island you choose to visit. Boa Vista is known for its rolling sand dunes and pristine beaches, while more rugged travelers might prefer the steep ravines and precipitous hiking trails of Santo Antão. Santiago is the largest island and center of the nation’s culture. Its capital, Praia, is a mix of African and Mediterranean influence, and its vibrant market not only offers delicious local food but also a taste of the island’s unique way of life. 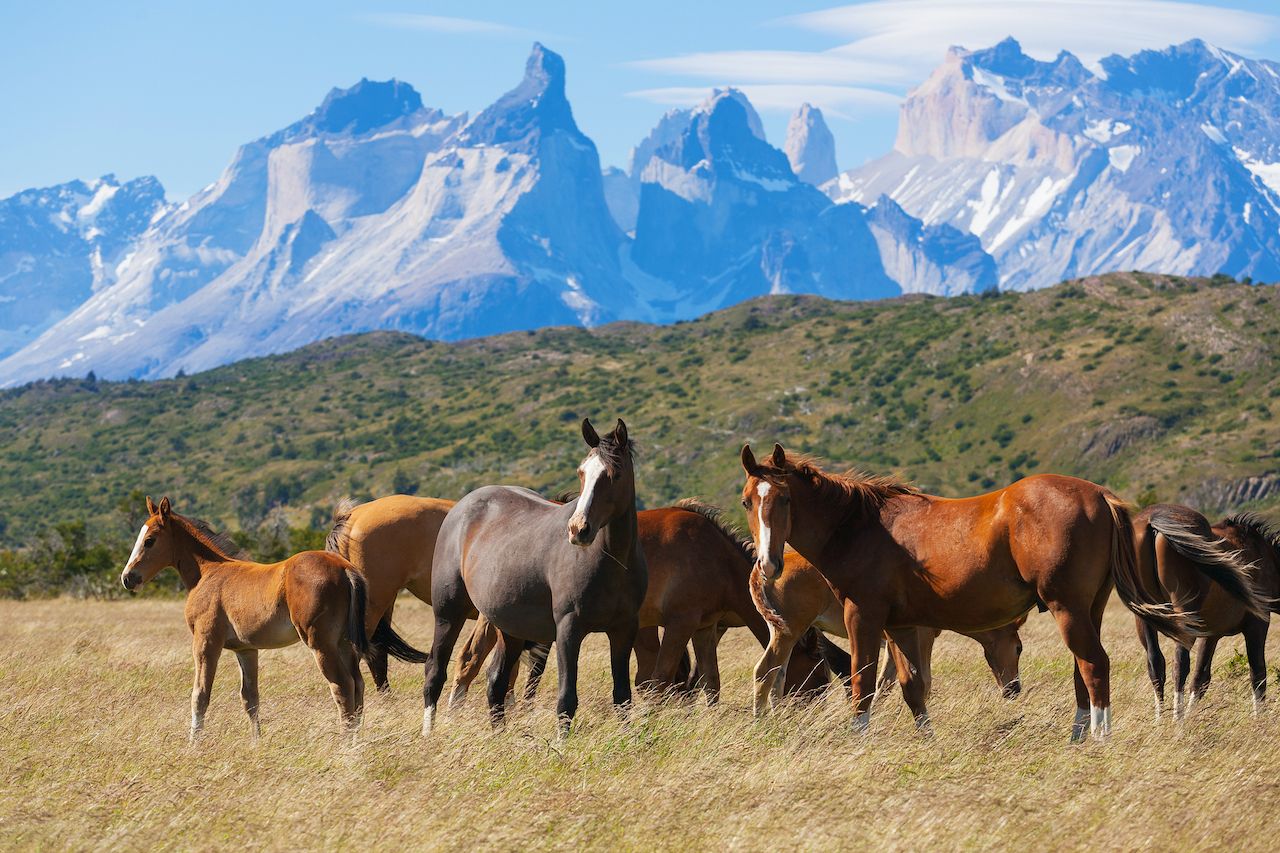 Patagonia is unlike anywhere else in the world, and lucky for restless winter travelers, the best time to visit is from November to March. Don’t expect a beach vacation like other Southern Hemisphere destinations, but the region is so full of epic adventures that a poolside margarita won’t even cross your mind.

Patagonia encompasses the southern parts of both Chile and Argentina, and both countries have a number of ways to experience it. Torres del Paine National Park is the crown jewel of Patagonia in Chile, and you could easily spend a week exploring the glaciers, grasslands, and iconic mountains. An overland jeep tour is one of the best ways to get a comprehensive park experience. The Base of the Towers is the most famous (and difficult) hike in the area, though other more moderate hikes, like Mirador Cuernos and Mirador Condor, also offer stunning views. You can also take a ferry to Grey Glacier to see the massive icebergs up close.

If seeing marine wildlife gets you excited, you’ll want to check out the Argentine side of Patagonia, which begins south of the Rio Negro. Península Valdés, on the north coast, is home to endangered southern right whales, as well as southern elephant seals and southern sea lions. Visitors can take a small boat to see the whales up close from Puerto Pirámides. 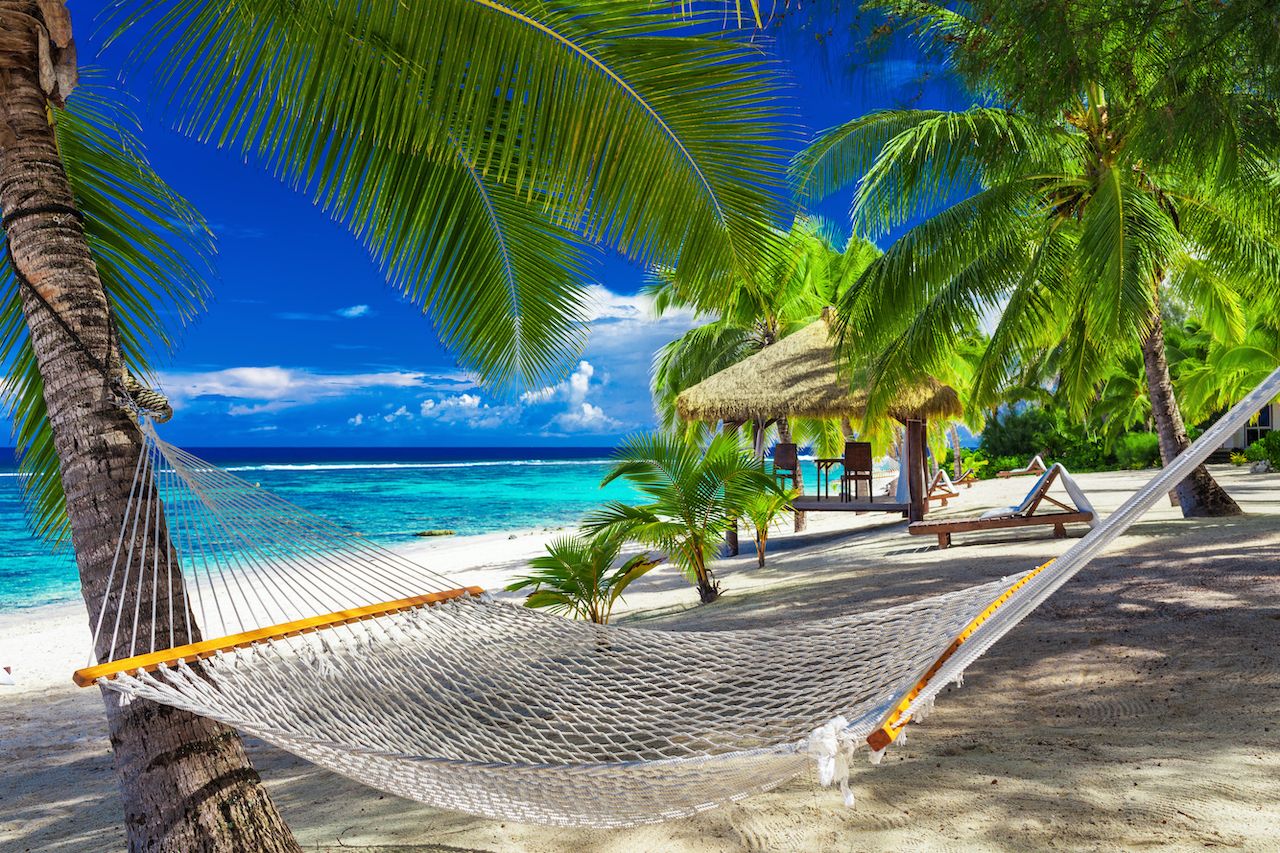 A trip to Hawaii may be met with jealousy, but a trip to Rarotonga will be met not just with jealousy, but also wonderment. Rarotonga is the largest of the 15 Cook Islands in the South Pacific, and it might be the best place for an authentic dose of Polynesian culture. Sure, showing up on a remote Polynesian island after a long flight might feel intimidating, but the whole island is encircled by a single road, making Rarotonga easily navigable.

In addition to nature walks through the island’s lush backcountry, where you’ll see breathtaking waterfalls that rival anything Hawaii has to offer, you can enjoy some of the best snorkeling and diving in the South Pacific. Hopefully, you don’t mind getting up close and personal with the local eels and sea turtles. The Sunday Punanga Nui Market is the perfect place to immerse yourself in the island’s culture and go ukulele shopping, while the evening shows at Te Vara Nui will introduce you to all the singing and dancing you can handle. 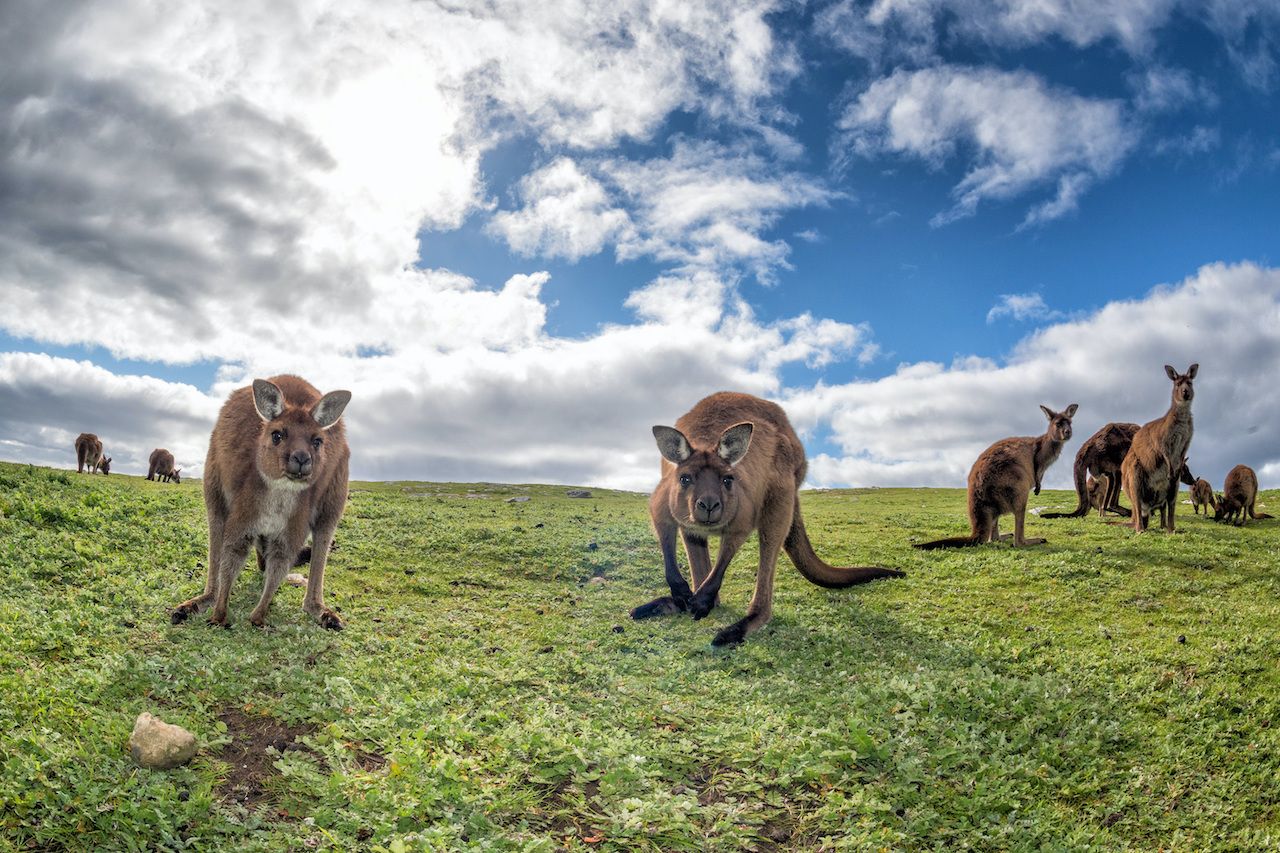 Not a whole lot of convincing needs to be done to pique a traveler’s interest about Kangaroo Island. To tickle the imagination with images of an eccentric boxing kangaroo community, all you really have to do is drop its name. Luckily for visitors, it isn’t a misnomer. Kangaroo Island is indeed named for its kangaroo population, of which there are an estimated 65,000 across the island.

Located 70 miles off the coast of Adelaide in Southern Australia, it isn’t just known for its marsupial population at Hanson Bay Wildlife Sanctuary and the Wildlife Park. It’s also famous for the Remarkable Rocks, the aptly named rock formations sculpted by wind and water for over 500 million years. Flinders Chase National Park, where the rocks are located, also has some of the best camping, fishing, and hiking areas in Australia. 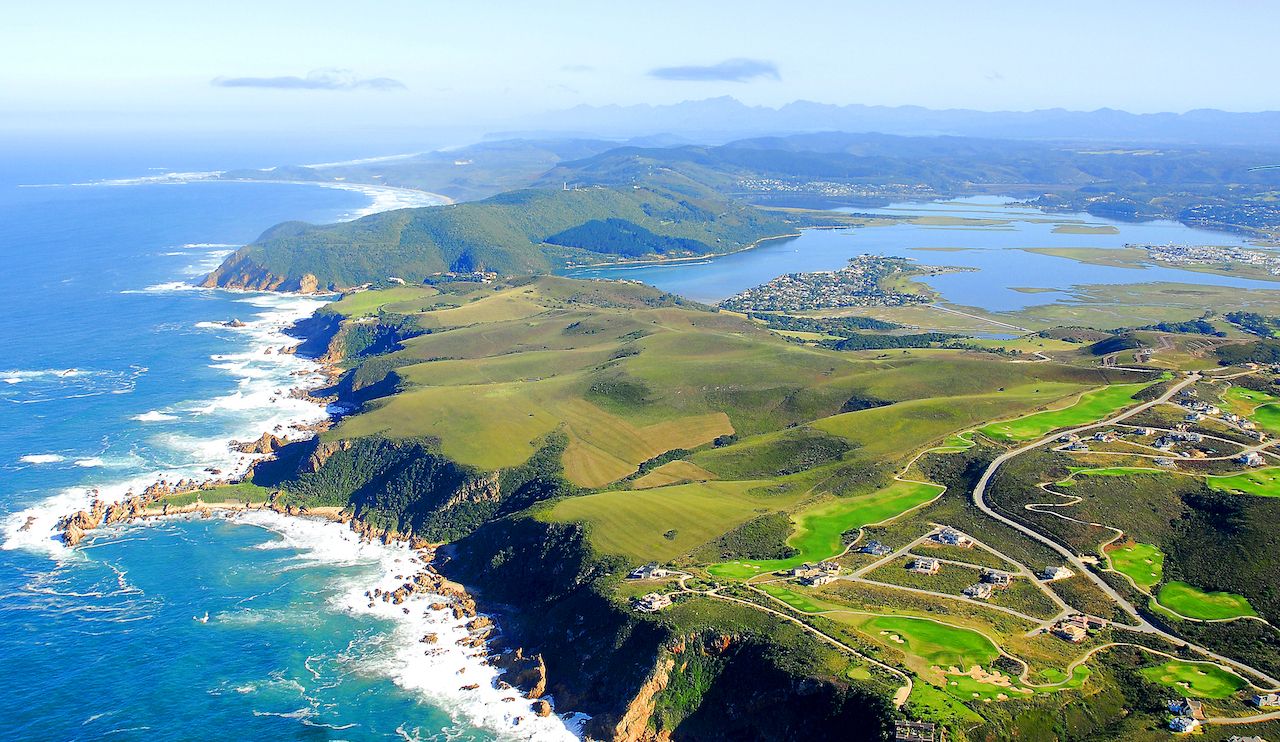 In lieu of that summer road trip through the United States, try kicking it up a notch with a mid-winter road trip through South Africa. Just don’t expect to be passing through miles of flat cornfields. The Garden Route extends nearly 200 miles across the southern coast of South Africa, and it’s defined by some of the country’s most beautiful forests, lagoons, lakes, mountains, beaches, and even wildlife.

You can travel the route in two days or two weeks, depending on how many stops you’re prepared to make. If you break at every excursion along the way, you’ll be road tripping for a solid month (and that’s not a bad thing). Running from Port Elizabeth to Mossel Bay, the route passes several hiking areas, whale watching tours, and caving excursions. Since it passes between the Indian Ocean and the Tsitsikamma and Outeniqua mountain ranges, the diversity of the landscape is unparalleled, with views of jagged cliffs, green forests, and coastal panoramas for the whole duration.

One stop you won’t want to miss is the Featherbed Nature Reserve on the Knysna Lagoon. Carve out some time for a nature walk along the coast and through the forest, with views of the Heads — sandstone rocks at the lagoon’s entrance. 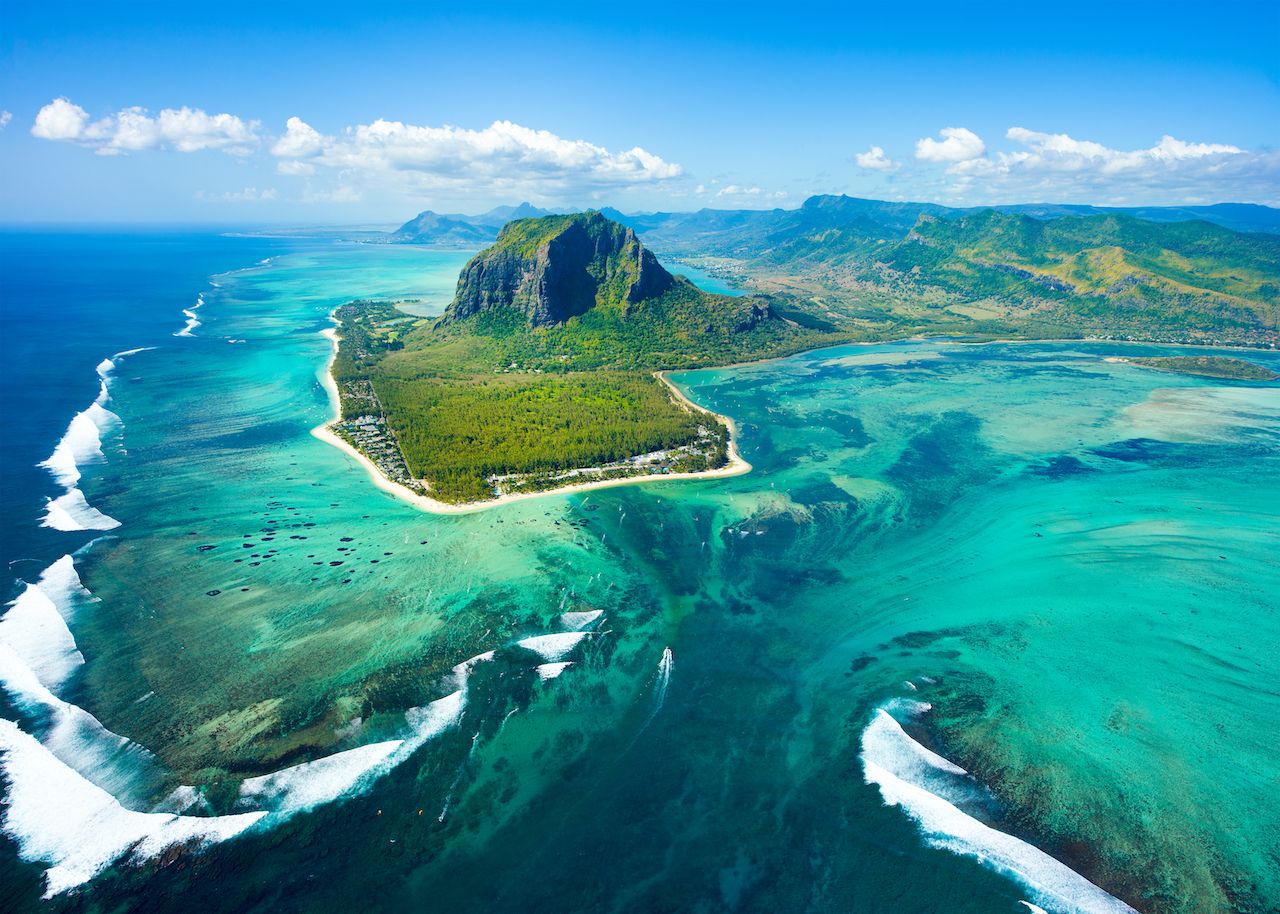 In his travelogue Following the Equator, Mark Twain illuminated the pride Mauritians feel toward their island: “From one citizen you gather the idea that Mauritius was made first, and then heaven; and that heaven was copied after Mauritius.”

Over a century later, this sentiment remains true.

It’s a common misconception that all tropical islands are alike. Some of the best island vacations are those where you don’t visit the beach at all due to the sheer variety of other activities the island offers, and the fascinating diversity of the local topography. Mauritius, located in the Indian Ocean about 500 miles east of Madagascar, definitely isn’t the kind of place you should go just for a lazy beach getaway.

Of course, the island is home to several relaxing beaches, but there’s also world-class bird watching, golf courses, and even one of the world’s oldest horse racing tracks — Champs de Mars in the capital of Port Louis. What will probably keep you busiest, however, are epic hikes around the volcanic island. Whether it’s trekking through the prehistoric-looking Black River Gorges National Park, or scoping out the wild boar, deer, kestrels, and monkeys in Domain des Chasseurs Game Park and Reserve, boredom simply isn’t an option here. 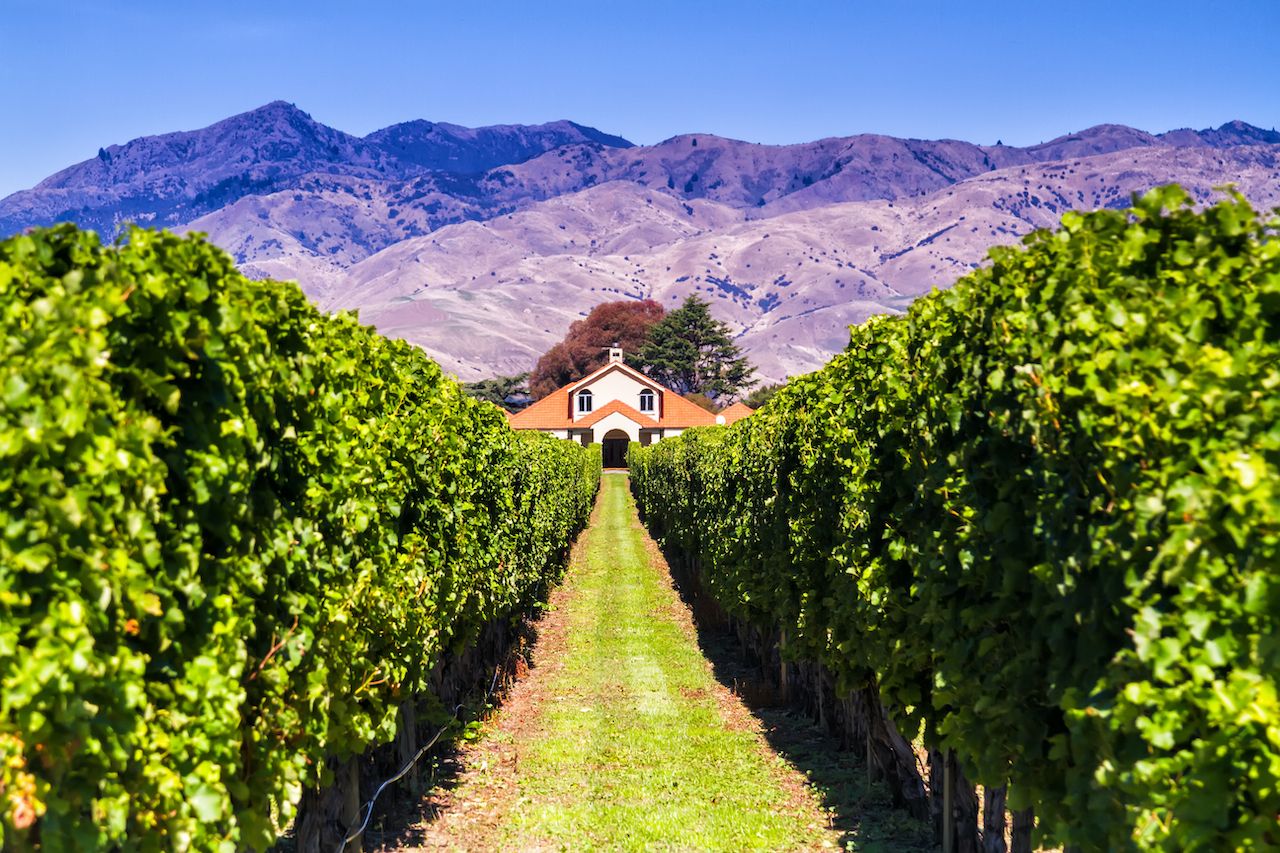 That Napa Valley wine vacation that’s been creeping into your dreams might not be feasible this summer, but you don’t have to put it off until next year. As you find yourself ending each day with a glass of wine to help you forget the increasingly frigid weather, you can jet off to one of the best wine countries in the Southern Hemisphere — New Zealand.

From Hawke’s Bay and Wairarapa on the North Island to Wellington and Marlborough on the South Island, New Zealand’s wine trail accounts for over 80 percent of the country’s wine production. Merlot and cabernet sauvignon fans will feel right at home in Hawke’s Bay, while pinot noir drinkers should head for Wairapa, and sauvignon blanc drinkers to Marlborough.

Even if you’re not a huge wino, the wine trail is a great way to experience the country’s cultural and adventure offerings. With historic villages, artist studios, wildlife, forest hikes, and brewery tours, you don’t have to be buzzing on merlot to have a memorable New Zealand experience. 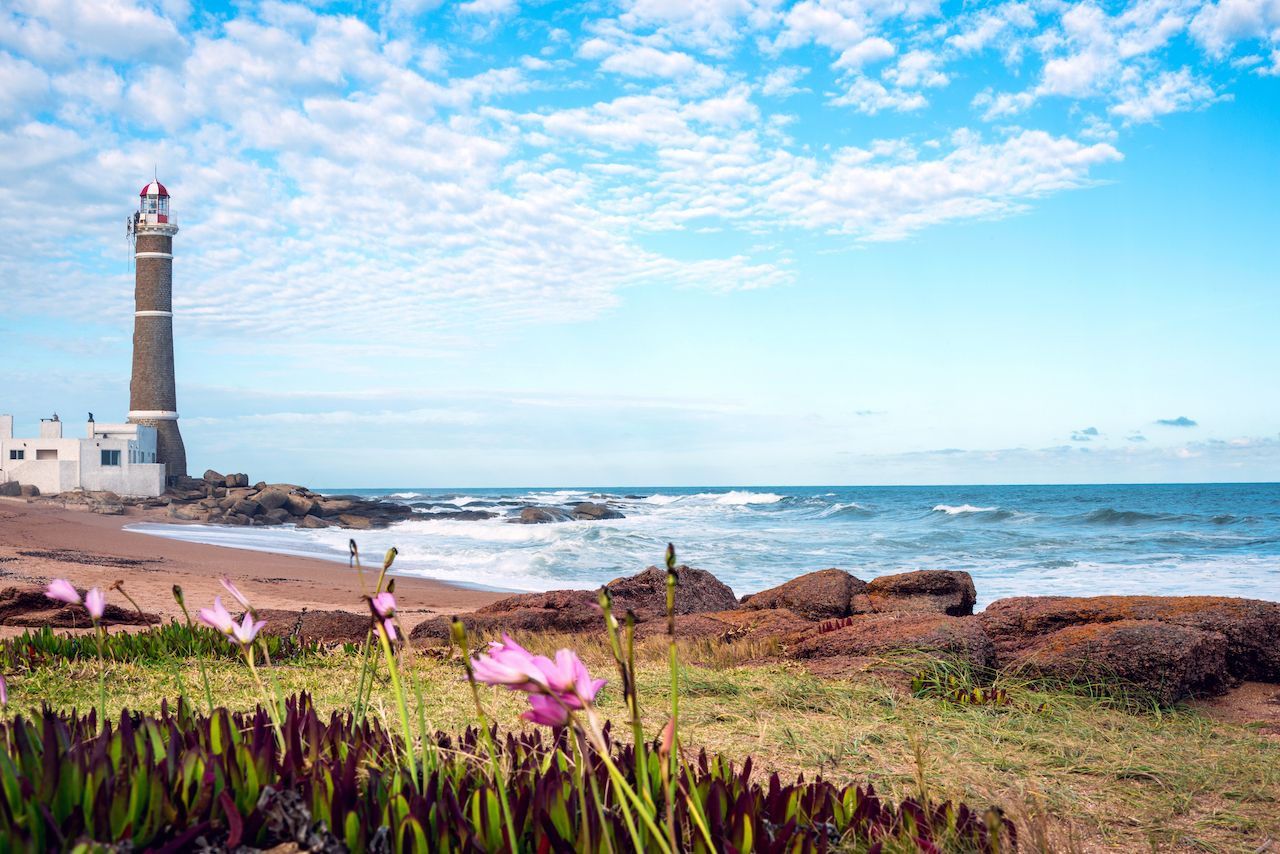 When you’re trying to narrow down your next travel destination, you might ask yourself, “Where would the locals go?” In the case of southern South America, the locals go to Punta del Este in Uruguay. The resort city in southeastern Uruguay is a popular vacation destination for residents of Buenos Aires and Brazil, lured by the golden beaches and luxurious resorts.

But the beach isn’t the only tempting attraction. Visitors can also enjoy horseback riding through the woods, or hire a fishing charter to learn how to fish like a pro Uruguayan fisherman. The city’s most recognizable landmark is The Hand at Brava Beach, a sculpture with five enormous fingers protruding from the sand. It’s the perfect excuse to lounge on the beach all day and call it a “cultural” outing. And, of course, since it’s a popular resort city, the nightlife in Punta del Este is among the best in South America. 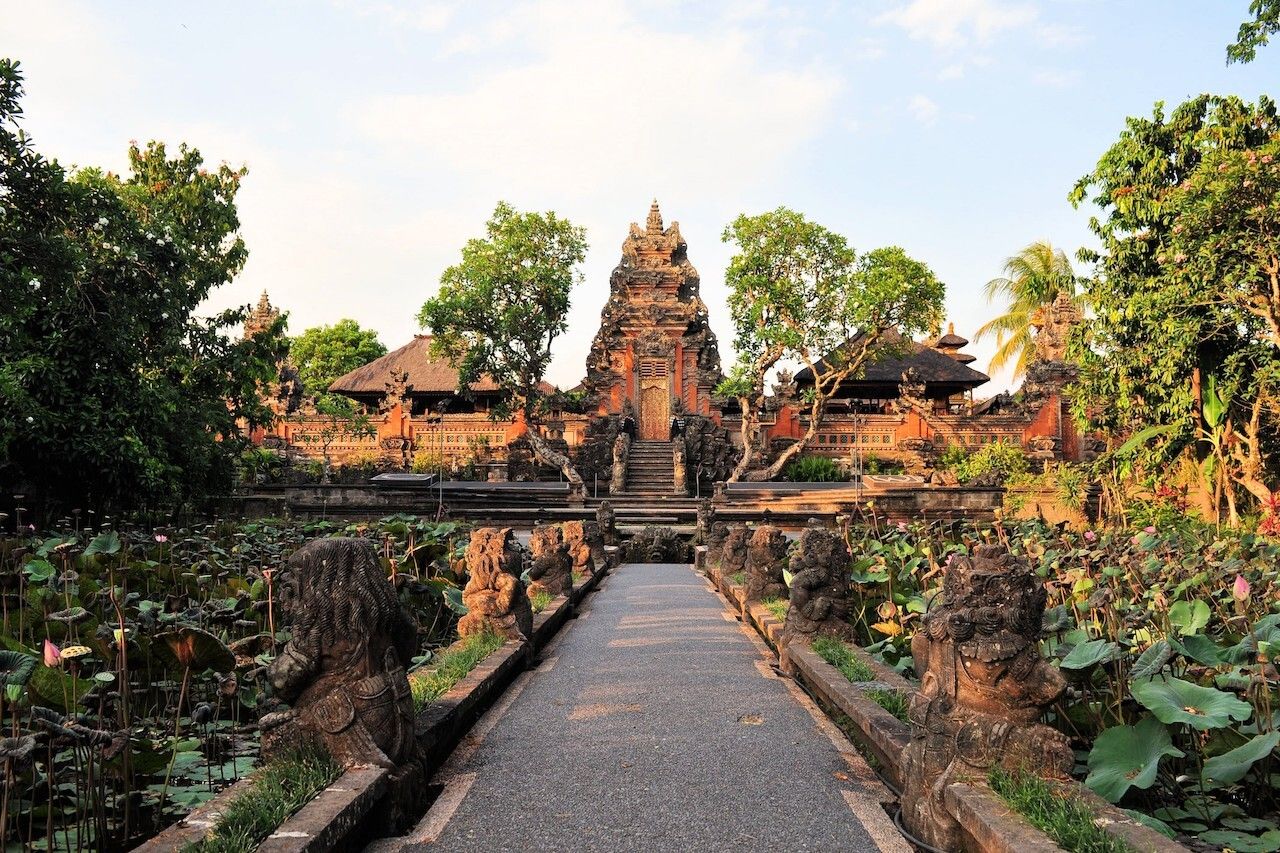 When you think of Bali, you probably think of one thing: a faux-candid Instagram picture of a bronzed influencer on the beach, striking an incredibly unnatural (and probably painful) pose and gazing into the distance like they’ve never seen a sunset before. Many travelers need no introduction to Bali, as the Indonesian island is a go-to getaway for those looking for an entry-level Asian experience, digital nomads seeking a temporary new home, and indeed, influencers trying to capture paradise. They all choose Bali for good reason. But there’s more to this island than just the beach.

Ubud, about an hour north of the beach towns of Seminyak and Denpasar, is a lush inland region with a totally unique — and more laid-back — feel. The cultural capital of the island, Ubud is known for its green valleys and rice fields, as well as its range of local coffees made from local Indonesian beans. It’s also close to the bathing waters of Tirta Empul, and ancient temples like Gunung Lebah and Pura Taman Saraswati.

Trip PlanningIt’s Spring in the Southern Hemisphere, so Here’s Where You Should Go
Tagged
Travel Trip Planning
What did you think of this story?
Meh
Good
Awesome