If you’ve ever been on a long road trip, you’ve probably passed by roadside attractions before: those dusty monuments that no one adds to their itinerary on purpose but that usually draw in tourists eager to break up the monotony of boring spells stuck behind the wheel. Usually unsuspecting visitors stumble across the “world’s largest ball of twine,” in Kansas or The Cabazon Dinosaurs in California while passing through small towns that usually aren’t hubs for tourism. But people keep stopping at roadside attractions for reasons, for the charm or nostalgia, or the pure absurdity. And if you’re one of those people who can’t resist pulling over to the side of the road to snap a picture with a silly statue, you’ll be happy to know not only do these roadside attractions exist all over the world.

Travelers who love food are in luck, too: There are many roadside attractions that are in the shape of food. Roadside food statues have become legendary monuments to the culture and history of the towns where they are located. Especially if you’re searching for Instagram-worthy shots with your favorite snacks, it might be worth taking a detour from your regular plans to check out these roadside food statues. Sure, derailing your vacation just to gaze upon a roadside food statue of a giant artichoke sounds a little counterintuitive, but at least you can say you’ve seen one of the weirdest monuments in America afterward.

As you work on building your exact road trip or vacation itinerary, you might want to make room for these roadside food statues near highways and in small towns. You might just learn something about each region’s prized crops, snacks, and claims to fame. If you end up loving it, why not put together a bucket list of roadside food statues, and try to see every single one in the world. Here are 11 roadside food statues in the shape of food that need to be seen to be believed. 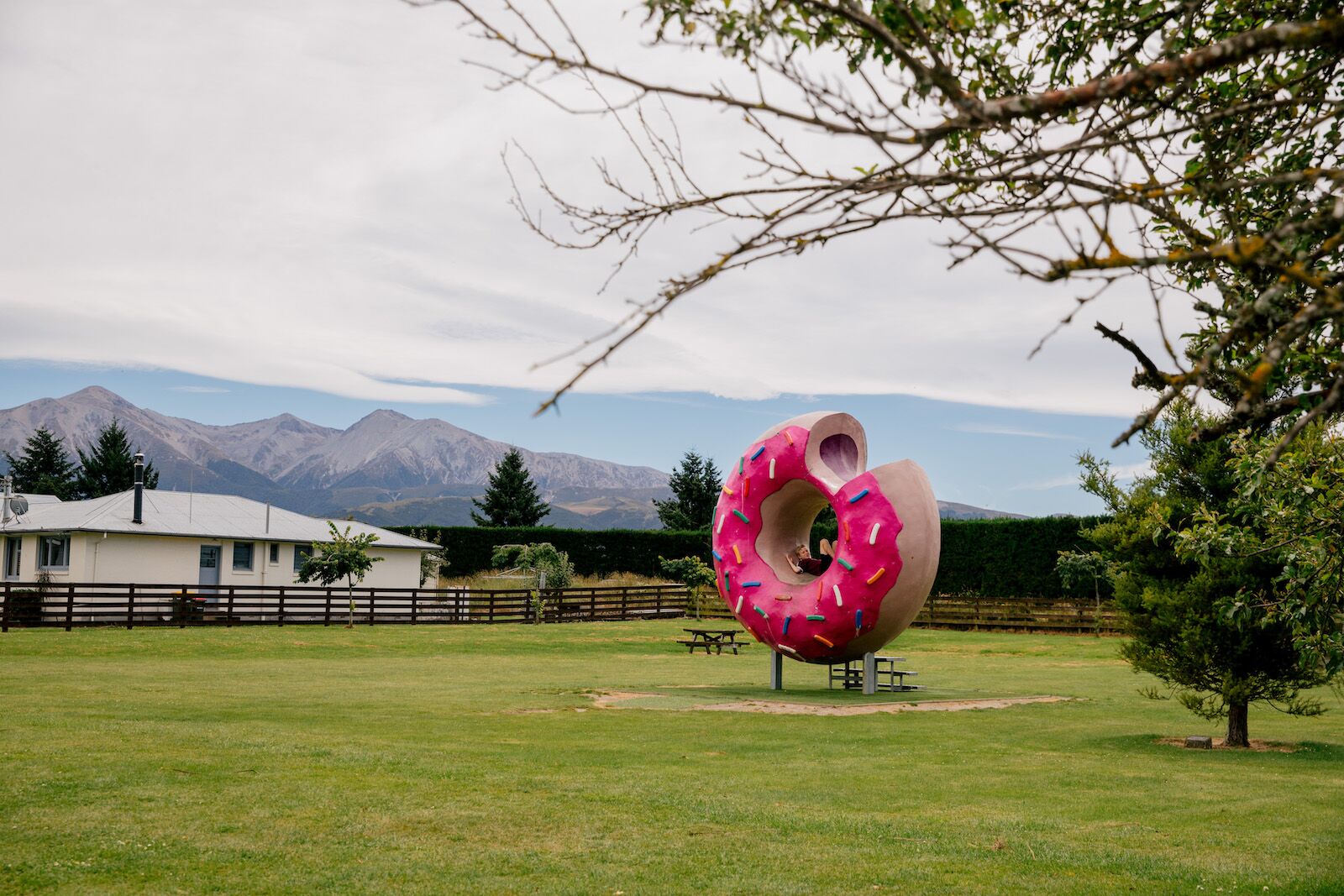 On West Coast Road in Springfield, in Selwyn, New Zealand, a giant replica of the famed The Simpsons donut was erected in 2007 in an open field dotted with picnic tables. If you’re a fan of The Simpsons, you’ll know why the donut belongs there – the show takes place in a town called Springfield (though that one is supposed to be in America). According to Stephanie Murphy, Communications Assistant at the Selwyn District Council, the gigantic pink sprinkled 6-ton statue replaces an earlier fire-damaged version.

“The original doughnut was gifted to the town by 20th Century Fox in 2007 to help launch The Simpsons movie,” Murphy said, “in tribute to the special role the fictional Springfield has played in the popular cartoon and to celebrate Homer Simpson’s love of doughnuts.”

After you snap a photo in the shadow of this giant pastry, head over to Springfield Donuts, a miniature cart near the park which offers “donuts of all flavors, but most importantly the classic pink icing with sprinkles.” 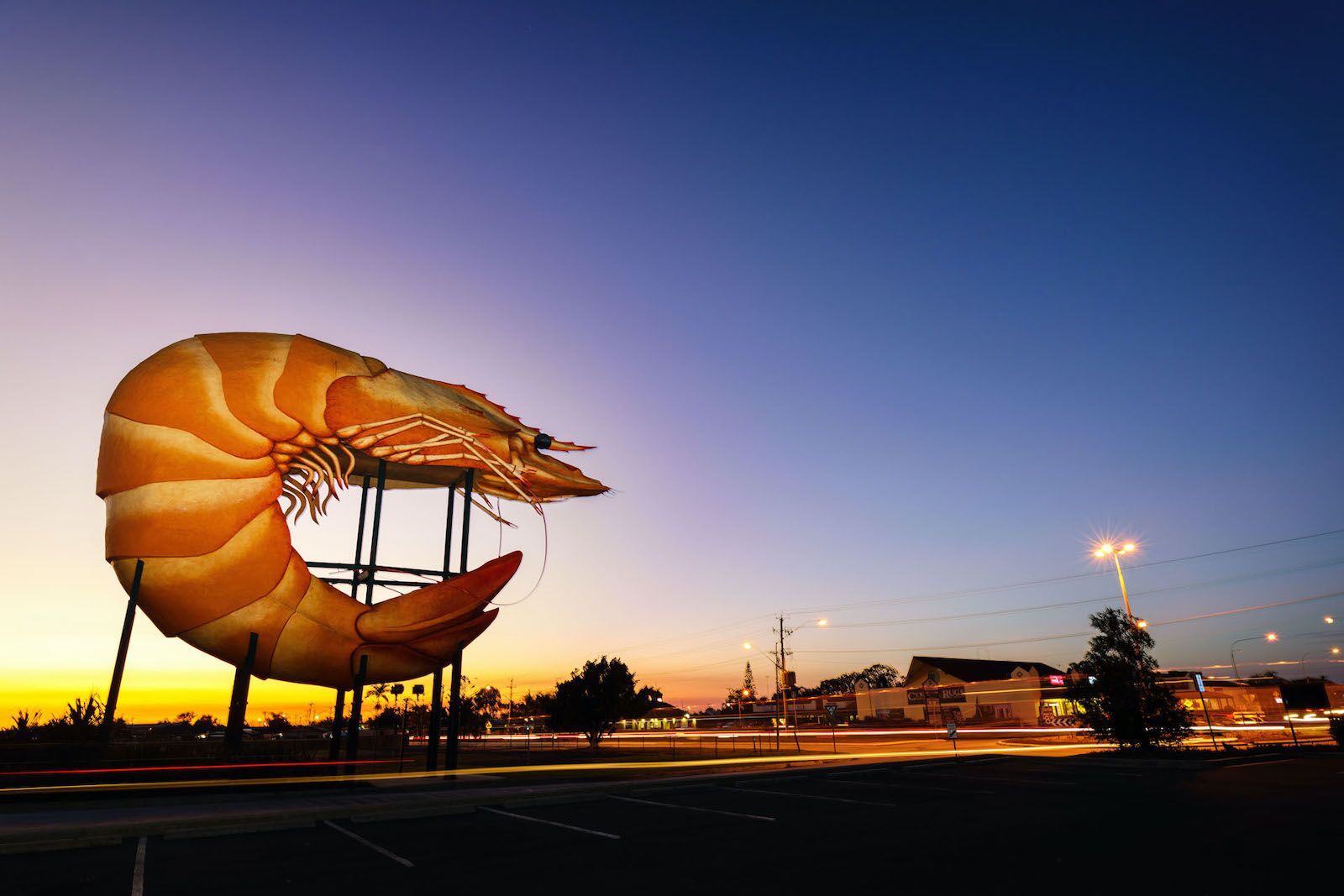 Travelers passing by 507 River Street in Ballina, New South Wales, Australia will find it impossible to miss the area’s 29-foot, 35-tonne prawn located near a variety of seafood shops.

According to Alicia Wallace, Ballina Destination Team Leader, at Ballina Coast and Hinterland, approximately “800,000 travelers visit the Big Prawn each year while in Ballina.”

Wallace also mentioned that the prawn, one of the most detailed and specific roadside food statues in the world, “is available for public viewing (and photos) at all hours of the day and night.” Visitors can also find a wide range of prawn souvenirs, like prawn socks, at the Visitor Information Center. 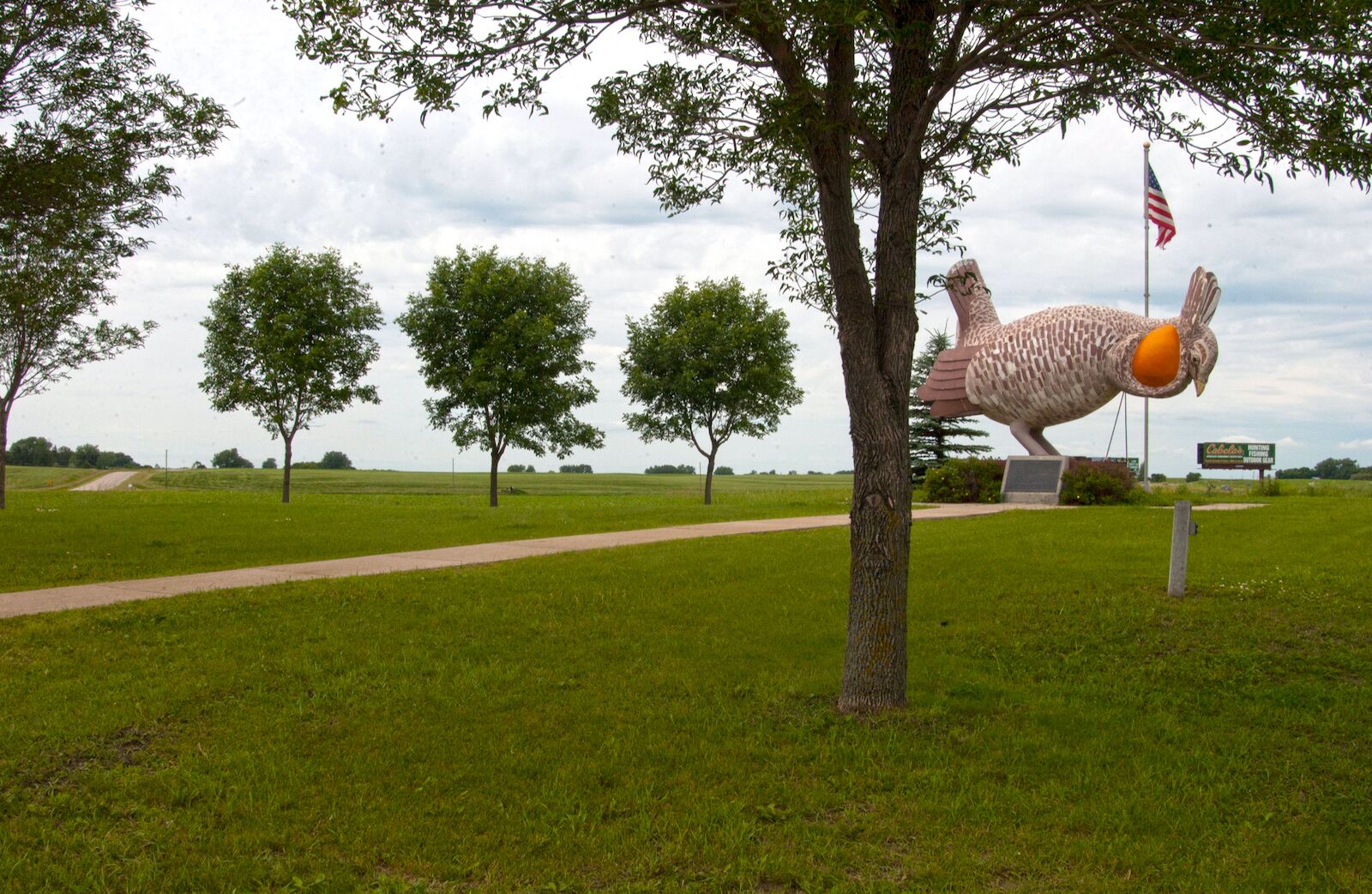 Visitors to Prairie Chicken Road in the small town of Rothsay, Minnesota can make a stop at The World’s Largest Prairie Chicken. The statue was designed in 1975; it stands 13-feet tall and weighs in at 9,000 pounds.

Those in the area who are interested in other large roadside attractions can also visit the 55-foot Jolly Green Giant in Blue Earth, Minnesota and the 65-foot tiger muskie in Madison. 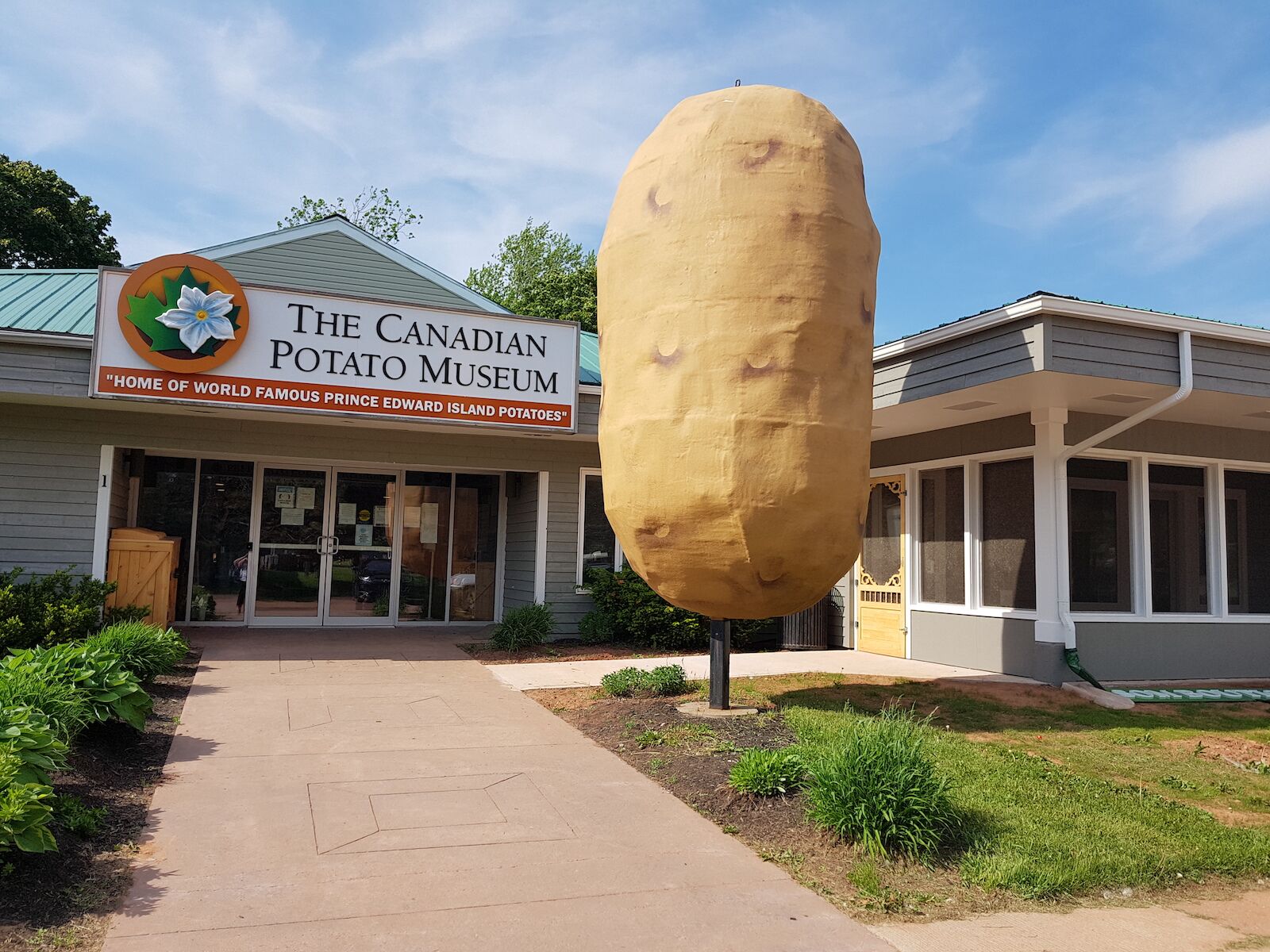 Visitors to O’Leary, Prince Edward Island on the east coast of Canada should not miss The Big Potato. The fiberglass 14-foot structure can be found at the entrance of The Canadian Potato Museum & PEI Potato Country Kitchen.

Donna Rowley, Museum Manager at The Canadian Potato Museum told Matador Network that although the museum has been operating since 1993, the potato was created in 1997, “as a way to attract more visitors to come to O’Leary and get a photo with The Big Potato.”

Visitors can also visit a local community museum, a potato based restaurant and gift shop within the grounds. Prior to Covid-19, the “museum would see upwards of 14,000 visitors,” Rowley added. 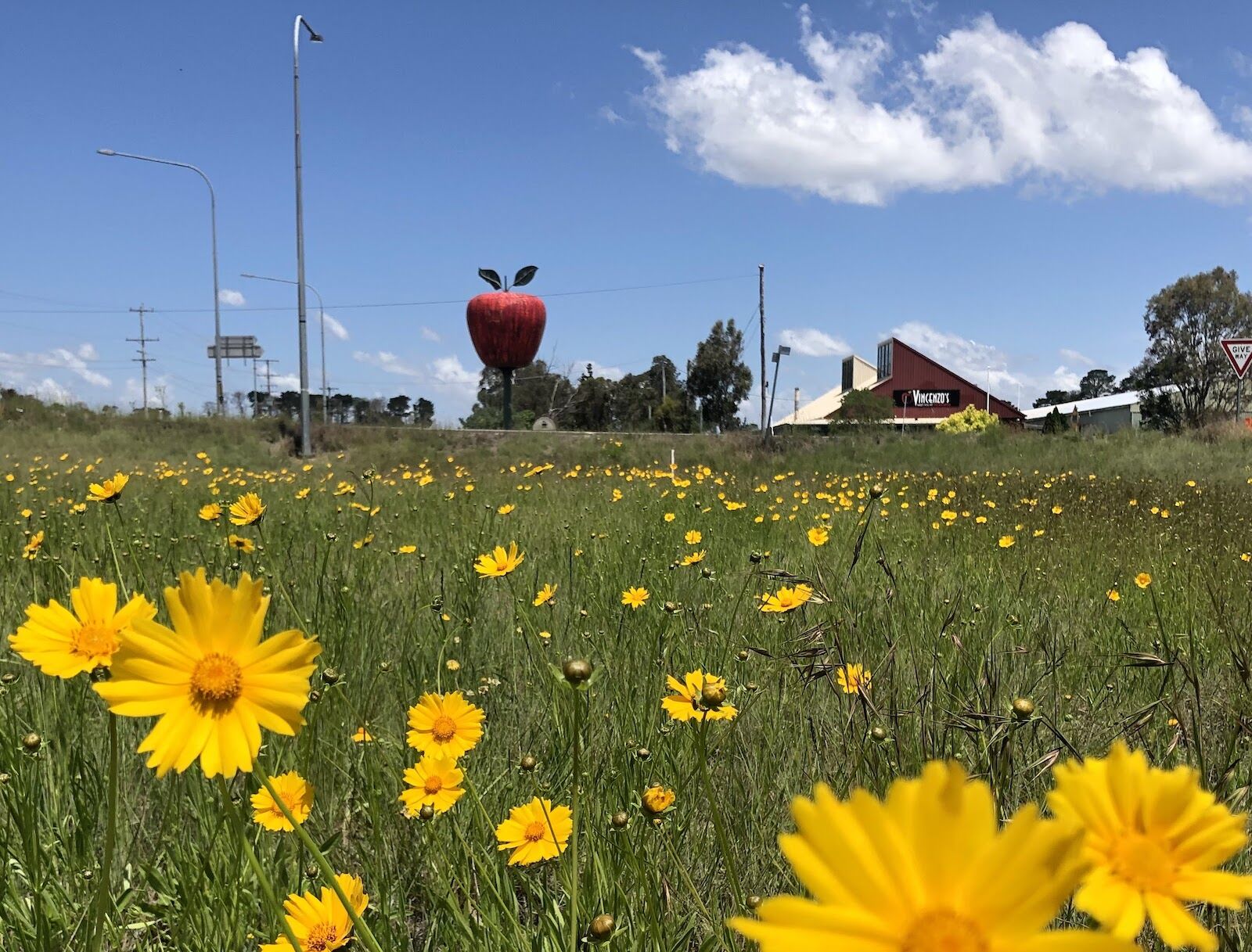 Although technically in Thumbilah, The Big Apple is often referred to as being in Stanthorpe, 8 miles north.

“[The Big Apple] was built in 1978 by local tradesman John Ross, and erected by Brian Wilmot at Vincenzo’s, a popular tourist spot near Stanthorpe in Queensland, Australia,” said Monique Krause, Marketing Coordinator at Granite Belt Wine & Tourism. “The Big Apple was originally painted green, but has since been painted the color of a red Royal Gala apple.”

Krause also mentions that the restaurant next door, Vincenzo’s at The Big Apple “operates as a café, a deli and a wine bar and is a very popular spot for tourists.”

Krause also added that a million apple trees can be found in Stanthorpe, “where all of Queensland’s apple crop is grown,” which makes The Big Apple a tribute to this staple crop. “[The town] is famed for its apple and wine production, which is enjoyed by foodies and wine lovers coming to the region known as Granite Belt Wine Country.”

Travelers in the area may also be interested in attending The Stanthorpe Apple and Grape Harvest Festival, which celebrates the apple and grape harvest in town.

The Giant Artichoke, Castroville, California, US 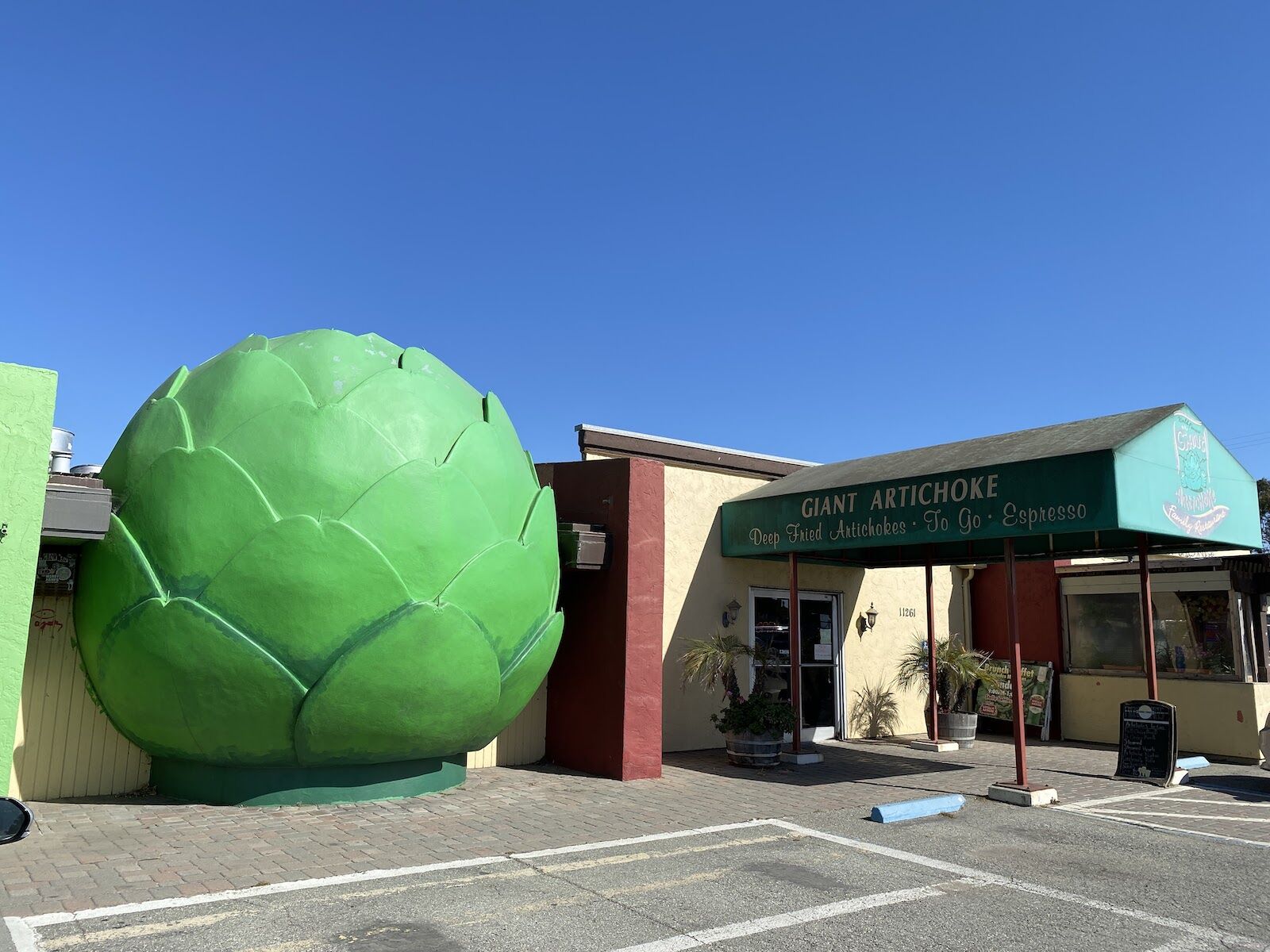 Visitors to Castroville, California, will be unable to miss the 20-foot Giant Artichoke in “The Artichoke Center of the World.”

“The Giant Artichoke has attracted millions of visitors since its inception in 1963,” said Rachel Dinbokowitz, PR Manager at Monterey County Convention and Visitors Bureau. “The 20 foot statue is a fitting tribute to the Artichoke Center of the World, Castroville, which still produces three-fourths of all California artichokes.”

Visitors can also stop at a nearby restaurant and market to try the vegetable once they are done gazing up at the artificial version, including one popular fried variety. 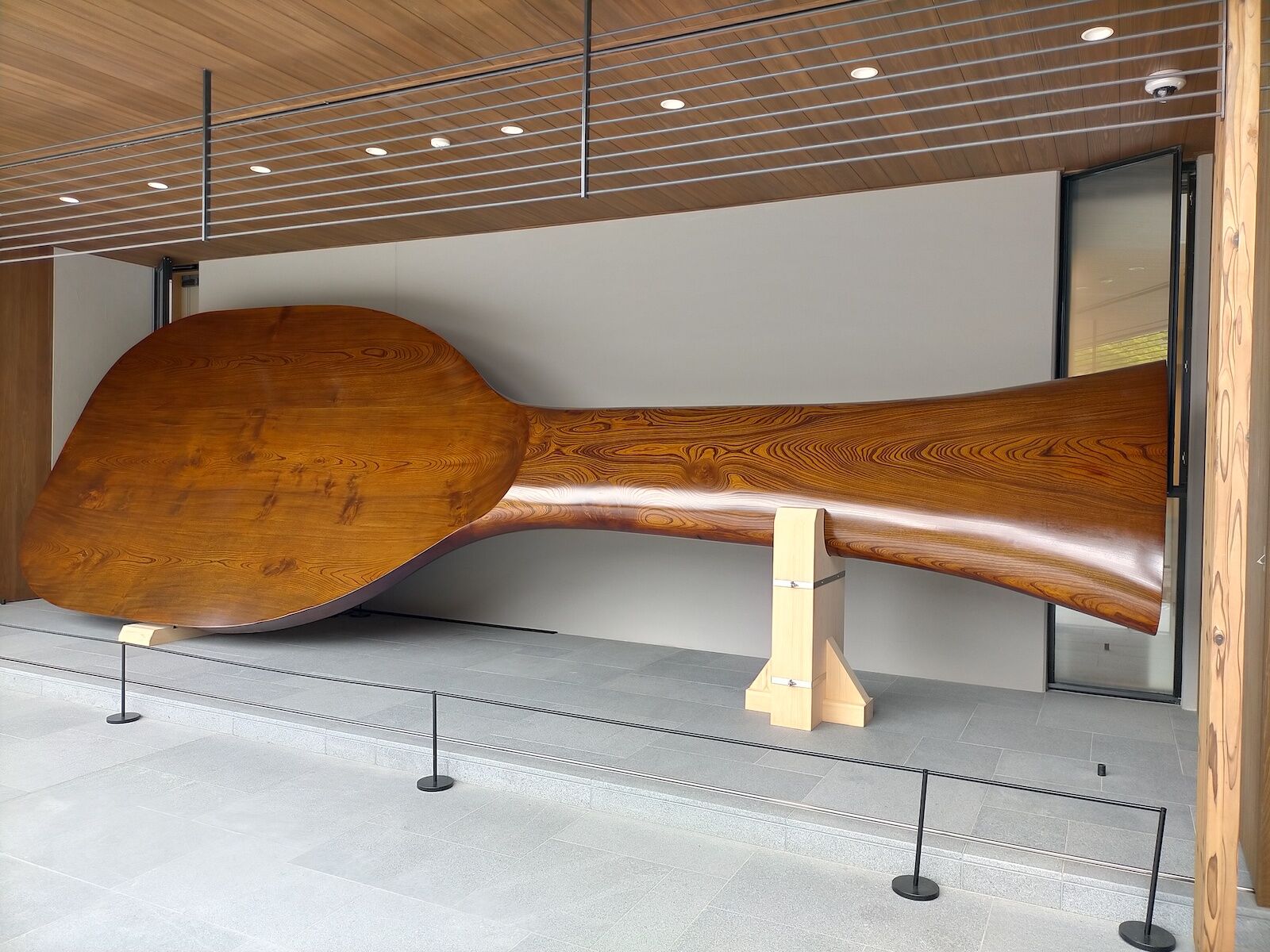 Visitors to Hatsukaichi in Hiroshima Prefecture, Japan should head to Miyajima within the city limits to see O-Shakushi, a 25-foot, 2.5 ton wooden rice scoop. Miyajima is famous for its rice scoops, and this particular one was made during the Showa period for posterity, and as a symbol of the town.

The rice scoop took two years and ten months to complete, but had to be left in storage for around fourteen years since a suitable display could not be found. 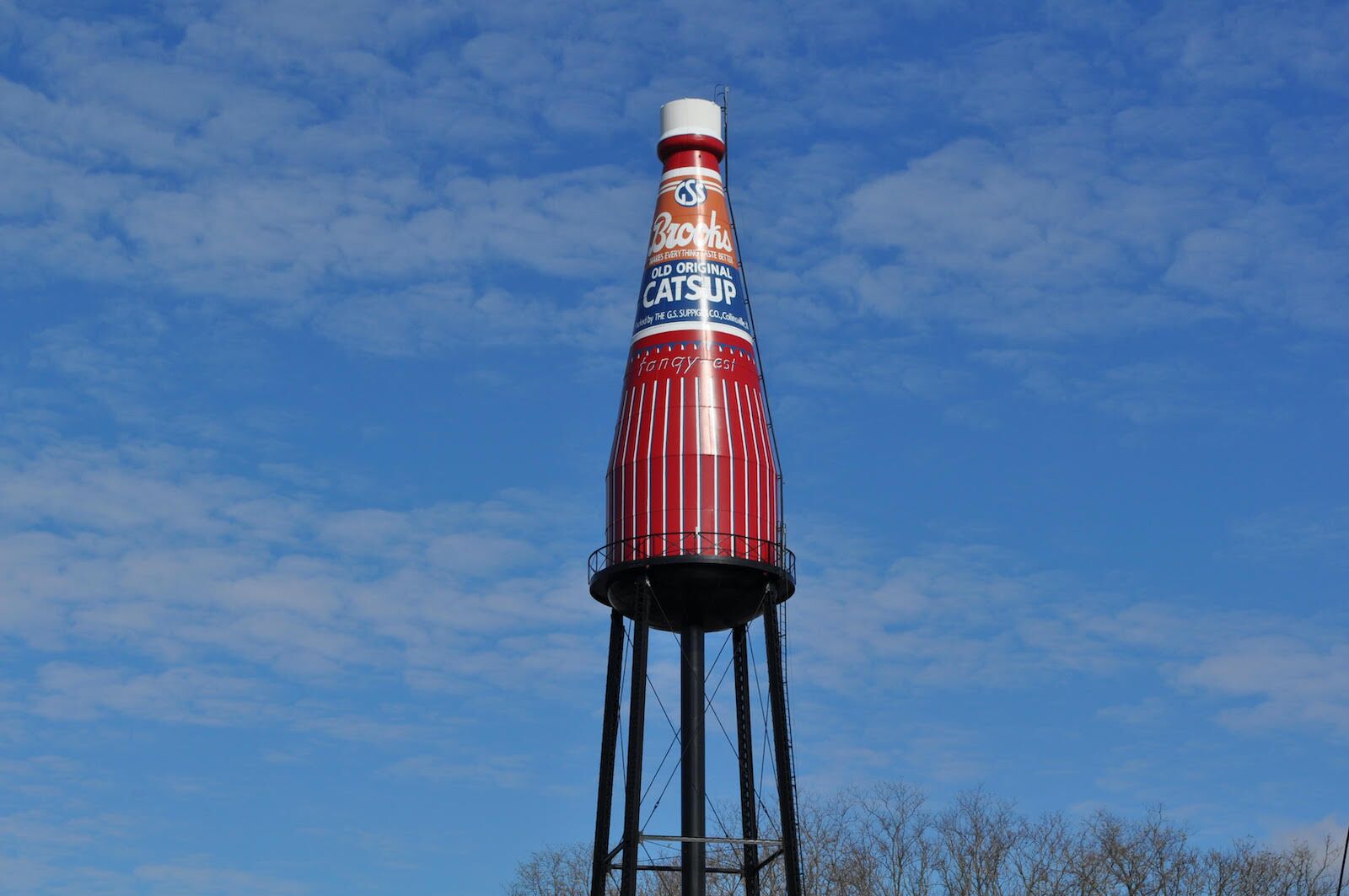 Visitors to Collinsville, Illinois, will be delighted to find a giant tribute to America’s favorite condiment at The World’s Largest Catsup Bottle.

Gassman explained that in 1995, the efforts of the Catsup Bottle Preservation Group saved the bottle “from demolition and beautifully restored to its original appearance.” 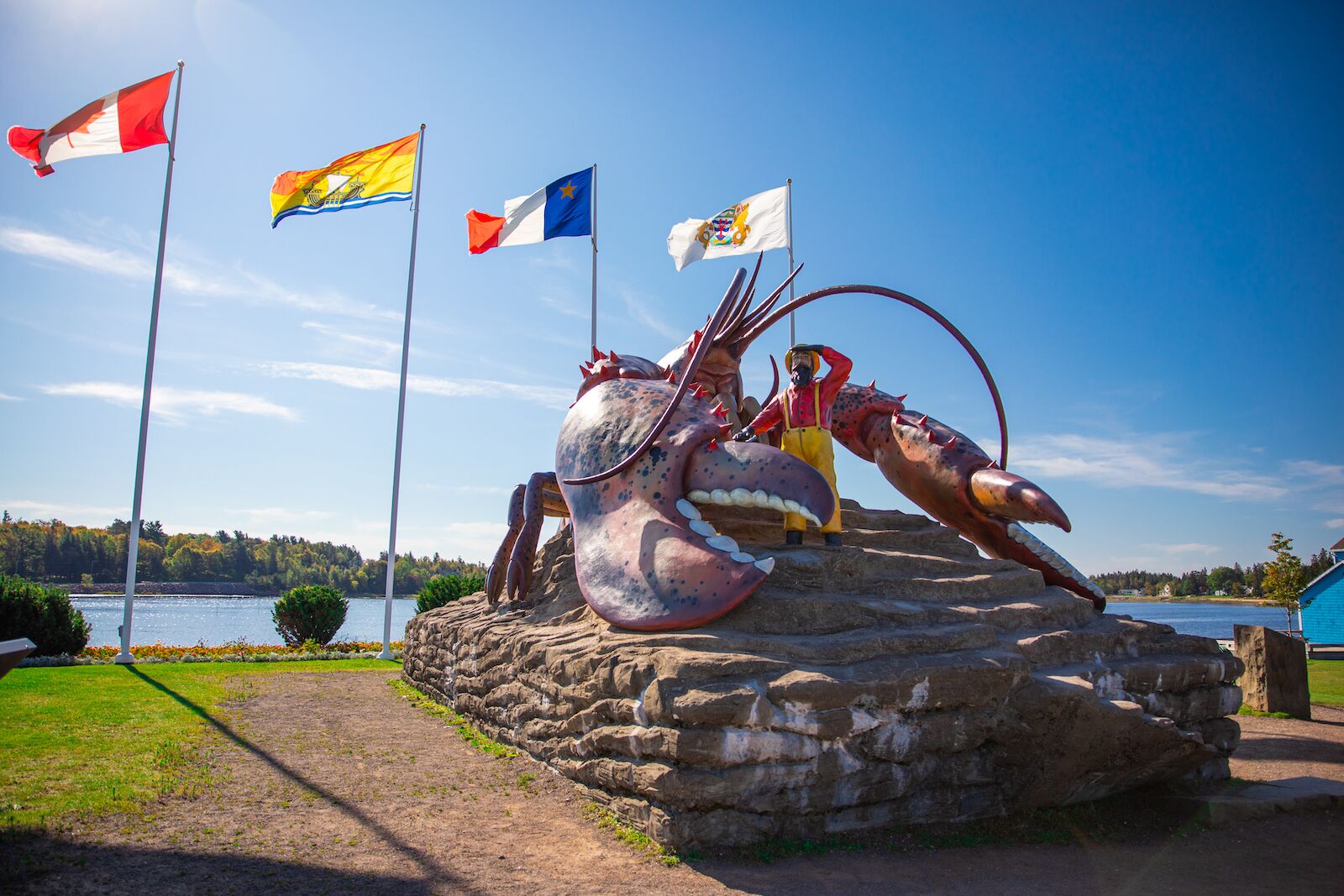 Located in The Lobster Capital of the World, eastern Canada’s 35-foot monument to these delicious crustaceans in Shediac, New Brunswick was erected in 1989. The statue is a homage to lobsters, which are vital to this community’s economic prosperity.

“The Giant Lobster is one of Atlantic Canada’s best-known landmarks and most photographed attractions—300,000 visitors flock to Shediac each year and almost everyone makes a stop at the Rotary Park” said Jonathan Chevarie, Tourism Development Officer at the Town of Shediac.

According to Chevarie, the lobster “has appeared in national TV advertising and hit television shows such as Amazing Race Canada.” 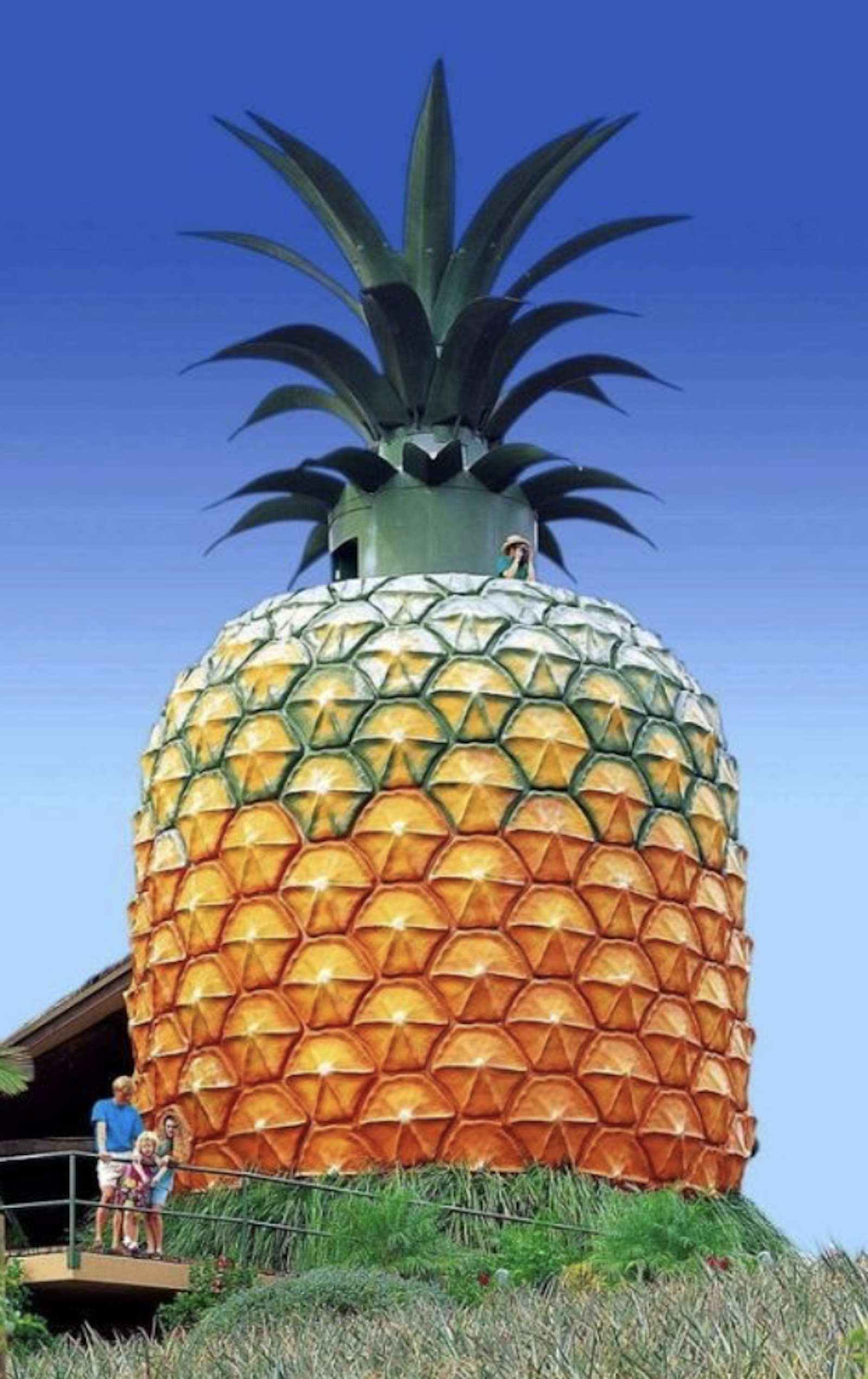 Near Brisbane on Queensland’s Sunshine Coast, “The Big Pineapple is a 13m fiberglass structure built in 1971,” which just celebrated its 50-year anniversary, according to Greg Bourke, Manager at The Big Pineapple.

“The Big Pineapple was a feature of roadside tourism, where a visit during the annual summer driving holiday season was a ‘must’ for most Australian families,” said Bourke. “In fact, The Big Pineapple Music Festival became Australia’s most visited tourism destination from the 1970s to the 1990s. The success of the Big Pineapple sprung from a novel idea in the 1970s, that a destination could be created from showcasing Queensland’s world class produce including pineapples.”

The pineapple was also the site of a royal visit in 1983, when Prince Charles and Princess Diana paid it a visit. Visitors stopping by today can also visit the area’s high ropes, zoo, zip line course, and Big Pineapple Music Festival.

NewsThe Best Road Trip Itinerary To See the Most Popular Roadside Attractions in the US
Tagged
Culture Food + Drink Museums Road Trips Travel
What did you think of this story?
Meh
Good
Awesome