Hurdling through the sky in a big metal tube can be traumatic with or without complications. Add in a good dose of turbulence or an unusually rocky landing, and even the most seasoned travelers will be quaking in their seats. While most flights go off without a hitch, there are a few airports that up the ante for pilots and passengers alike due to their less-than-ideal locations and layouts. Here are eight of the scariest airports to fly into, and why landing there is sure to test your air-travel grit. 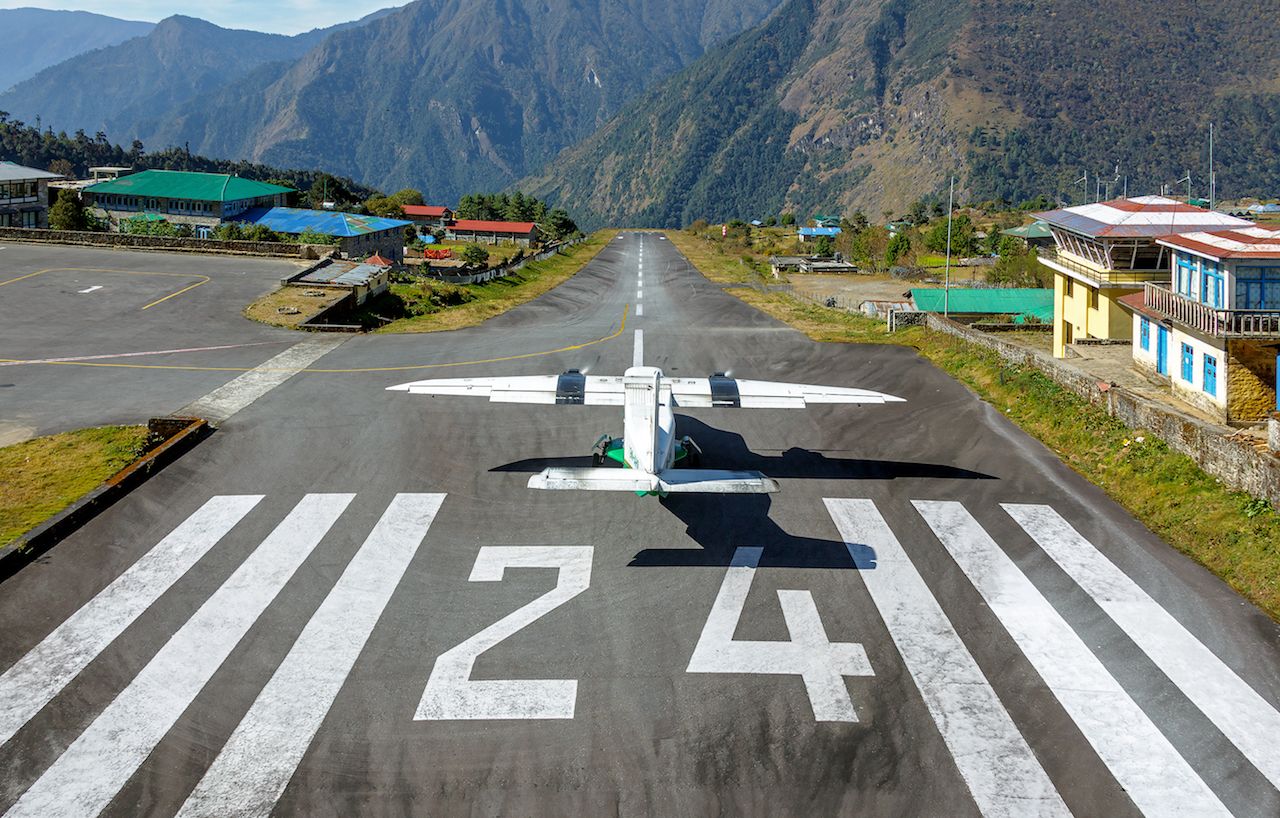 In a way, it makes sense that flying into the airport best known for bringing Mount Everest hopefuls one step closer to summiting the mammoth peak is a bit of an extreme sport in and of itself. Measuring just 1,500 feet, the runway at Tenzing-Hillary Airport doesn’t leave much wiggle room for pilot error.

The runway is surrounded by mountains not quite as tall as Everest but still sizeable, and the drop at the very end of the landing strip reaches almost 10,000 feet, so taking off from this airport is as sketchy as it gets. Due to the runway’s short length, only small propeller aircraft are able to use this airport. Even if you have no immediate plans for Himalayan trekking, the conditions at this perilous airport — aptly named for the first people to summit Everest — will make your palms sweat just hearing about it. 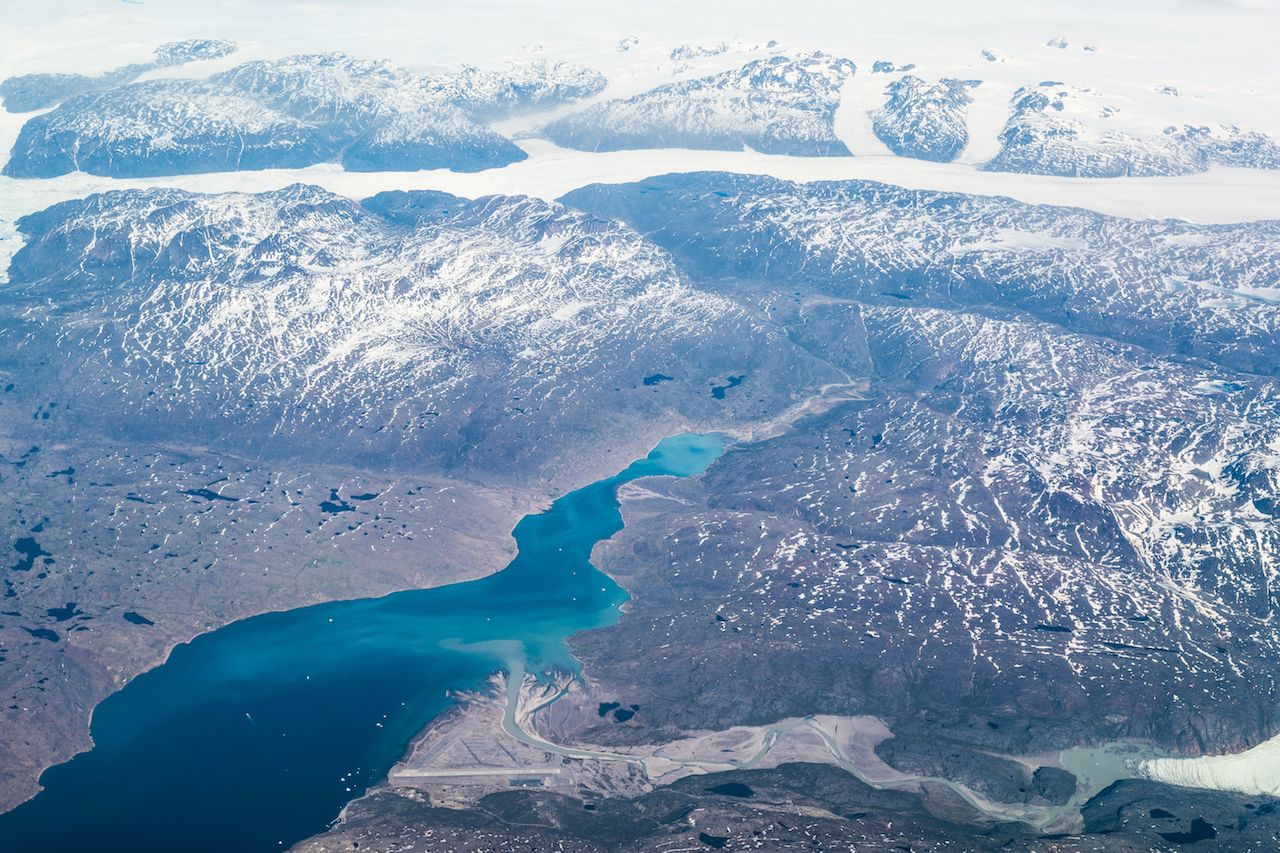 If you can spot the landing strip on the photo above, you know that UAK is not your average airport. Passengers can expect some pretty serious turbulence when arriving at Narsarsuaq Airport (UAK) as it falls victim to air currents created by the Tunulliarfik Fjord. The airport has been used for commercial purposes since 1949 and serves as the only international airport in southern Greenland, making it one of Greenland’s most important transport hubs. While this makes travel to the icy island easier than ever before, it also means you can expect to start your trip with a bumpy — albeit beautiful — ride. 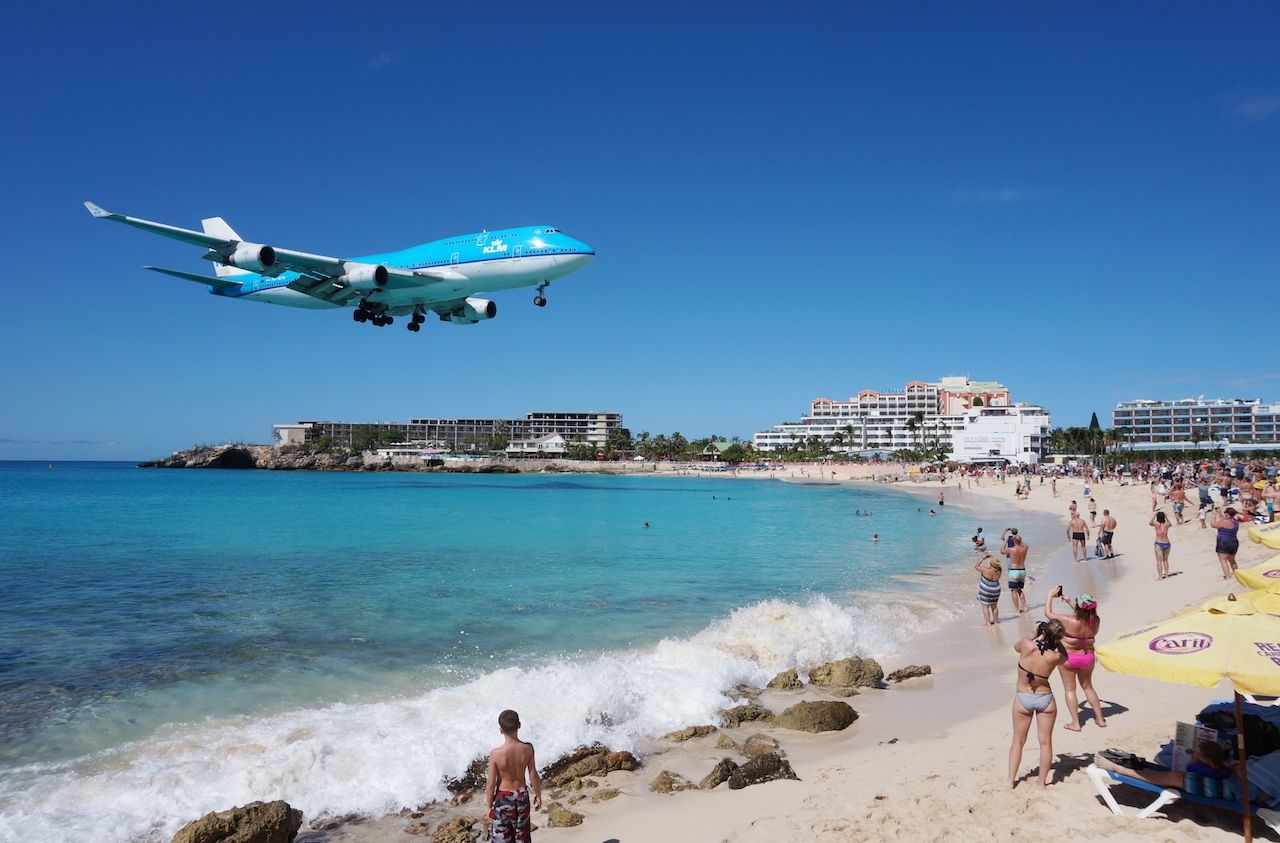 St. Maarten’s Maho Beach is one of the best plane-spotting locales on the planet. Incoming aircraft practically graze its sandy shores en route to Runway 10 at the Princess Juliana International Airport, flying so close to beachgoers that they can almost feel the heat of the jet engines. Sure, the low-flying planes make for pretty postcards juxtaposed with the clear water below, but they’ll also have you crossing your fingers for a safe landing — whether you’re on board or ashore. Fortunately, the airport has had no major incidents, so the hair-raising descent shouldn’t put you off visiting the island altogether. 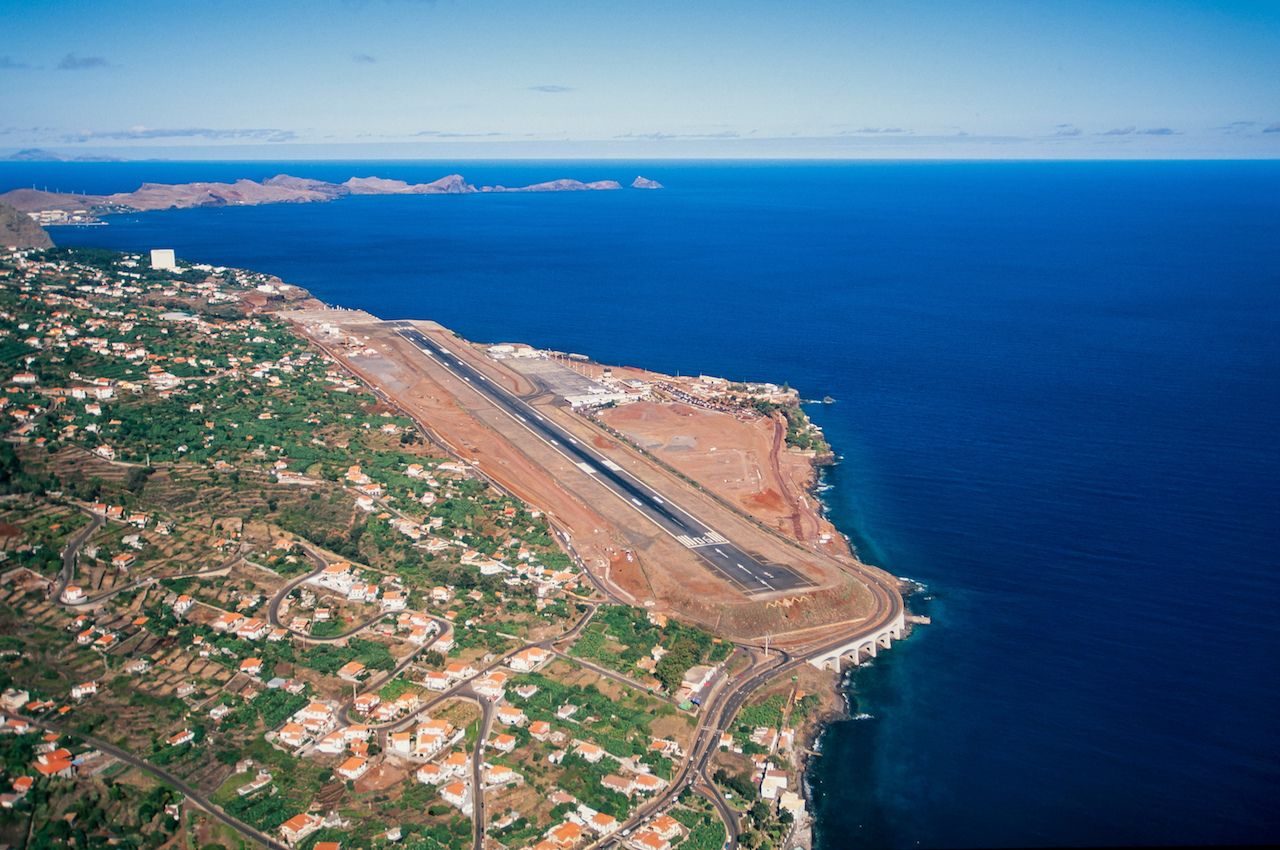 Also known as the Cristiano Ronaldo Madeira International Airport in honor of the Madeira-born football star, this airport is so tricky to fly into that pilots require extra training to land there. It’s surrounded by the Atlantic Ocean and tall peaks, which are natural disadvantages when it comes to runway placement. The runway itself measured a little more than 5,000 feet when it was first built, though it has since nearly doubled in size. During its second extension in 2000, the landing strip became safer yet somehow more terrifying as part of it now hangs out over the ocean on a platform held up by just under 200 columns. 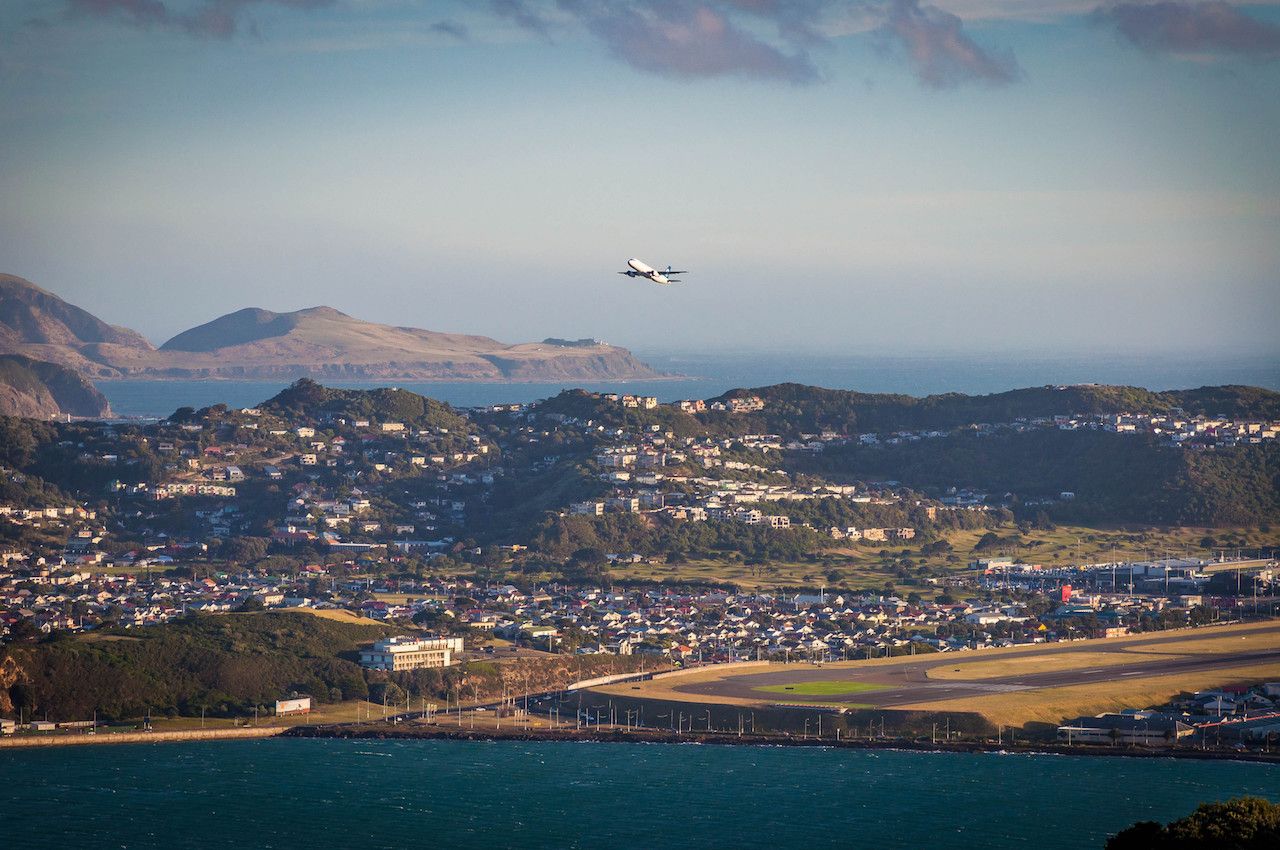 Gales and crosswinds are the biggest hazards at Wellington International Airport, which has seen its fair share of harrowing landings. To make matters even more frightening, the airport is located right by the ocean, so there’s the looming fear of an unexpected water landing. Thankfully, there are strict rules for touching down at this wild, windy entry point to New Zealand’s North Island, so incoming passengers can breathe easy knowing they’re in good hands. 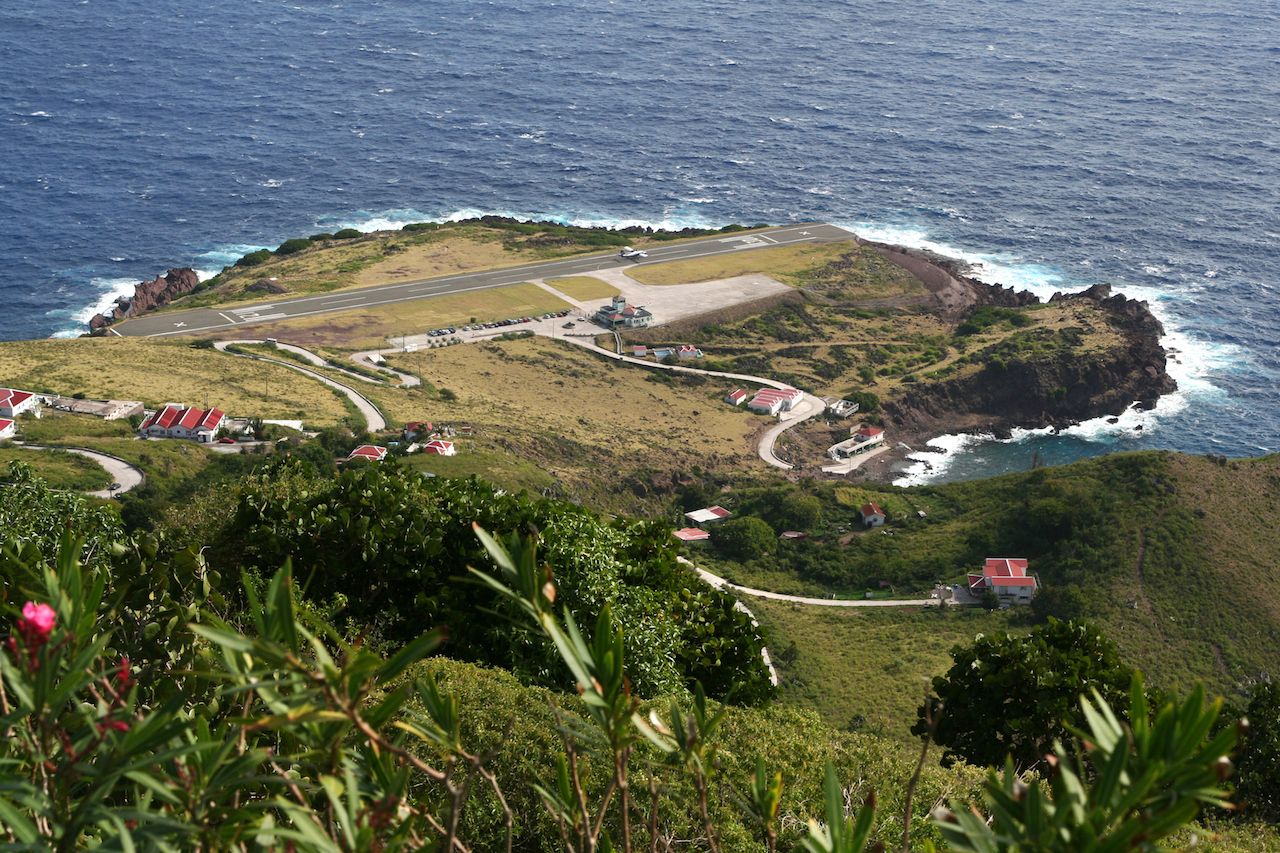 Saba is a tiny Dutch Caribbean Island with a proportionally small runway. Spanning a total of roughly 1,300 feet, it’s said to be the shortest commercial landing strip in the world. Even a minor miscalculation by a pilot or unexpectedly stormy weather could mean toppling over the surrounding cliffs and plummeting into the sea, which is far from comforting, especially considering the fact that the airport is located in a wind-prone area. All things said, Saba is a pristine, mist-shrouded island that absolutely everyone should visit — if they dare. 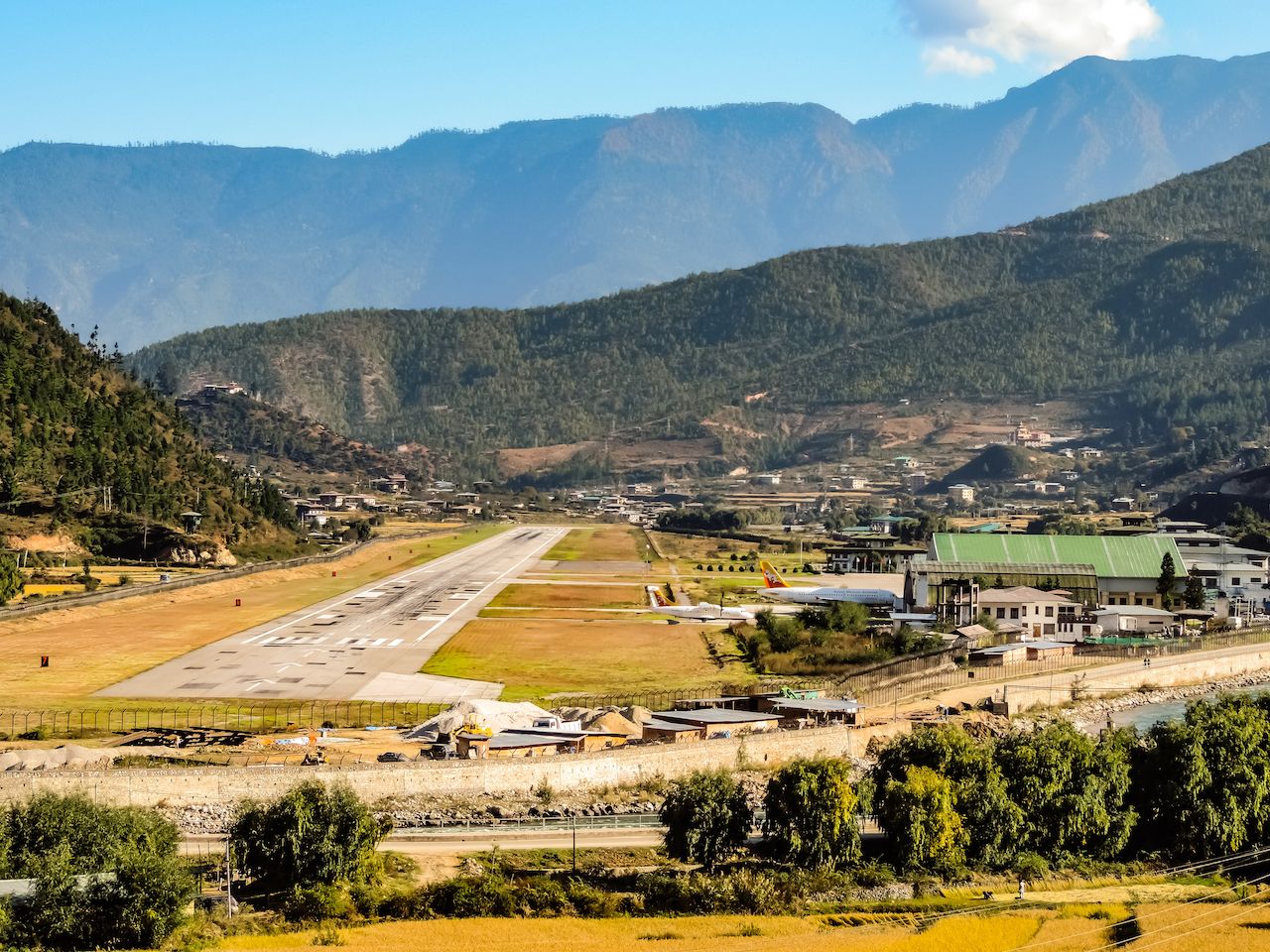 The only international airport in Bhutan, this remote transit hub is situated in a deep valley between mighty Himalayan peaks reaching up to 18,000 feet. You might be tempted to snag a photo of the scenic descent, but there’s a good chance you’ll be death-gripping the armrest when you arrive, given the high wind speeds in the valley and snug landing zone.

Only a handful of pilots are actually licensed to land at the Paro Airport, and flights are only scheduled during daylight hours on days with no visible meteorological interferences — that pretty much says it all. 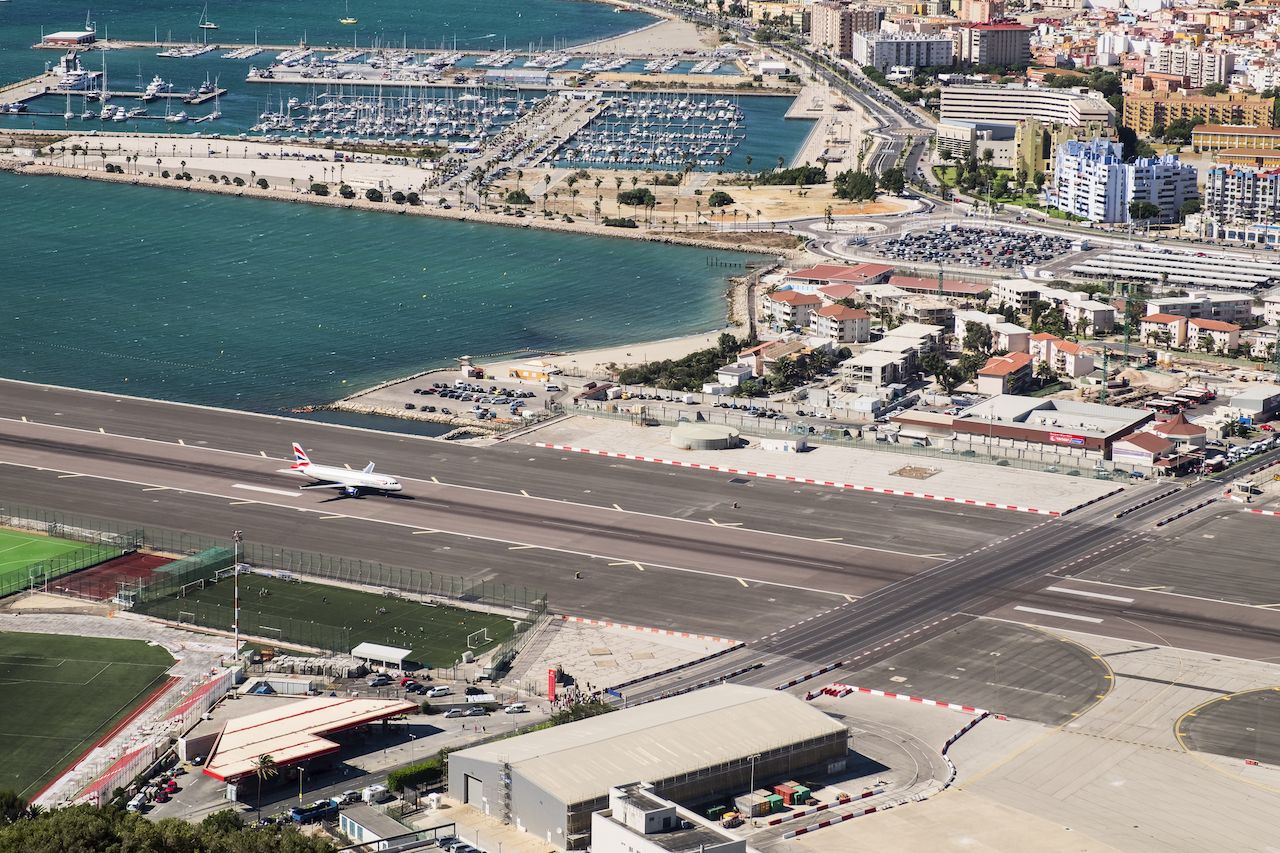 Cars and planes rarely have to compete for the right of way — one of the peculiarities for which the Gibraltar International Airport is known. The territory’s four-lane main road, Winston Churchill Avenue, crosses directly over the landing strip, meaning traffic has to come to a halt whenever there’s an incoming or outgoing flight. The rest of the airport’s reputation for crazy landings centers on the fact that the surrounding rock walls and nearby Bay of Algeciras create rough, turbulent crosswinds.

TravelHow To Manage a Fear of Flying When You Love To Travel
Tagged
Airports + Flying Travel Insider Guides
What did you think of this story?
Meh
Good
Awesome