American trains are not the fastest in the world. They also severely lack the network of tracks necessary for people to ditch their car or forego flying to rely on them entirely for their domestic travel needs. But Amtrak has one big flex over the likes of Japan’s Shinkansen or France’s TGV: It crosses — slowly, for our viewing pleasure — some of the most beautiful natural landscapes in the world. 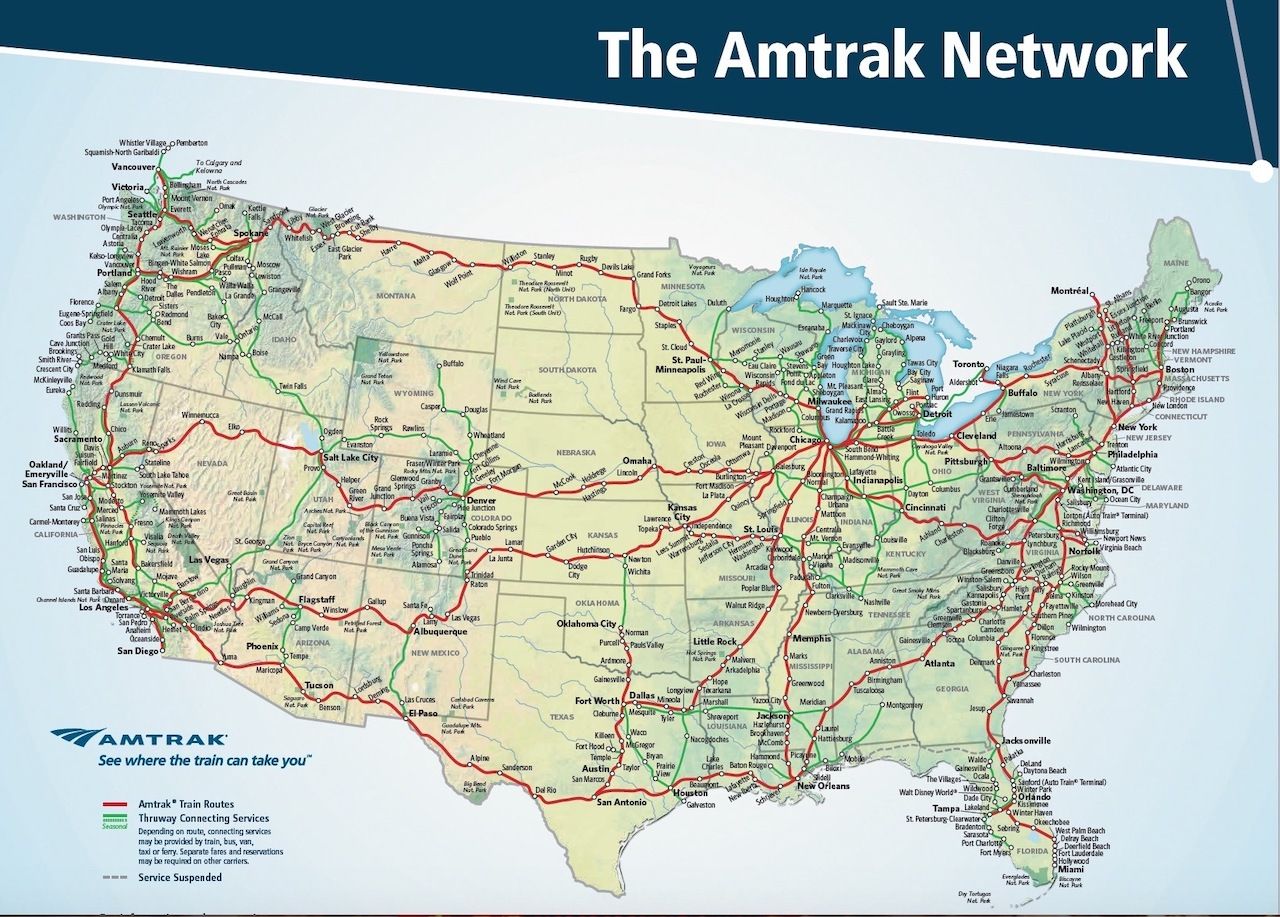 Amtrak trains travel near or through 21 US National Park Service sites, including some of the most visited national parks in the nation. Some Amtrak train routes even have stations within national parks, so visitors can hop off and easily enjoy America’s stunning wilderness without the need to drive.

Below are six National Park Service sites that you can admire from the comfort of an Amtrak train window seat for the next time you crave a scenic train ride. 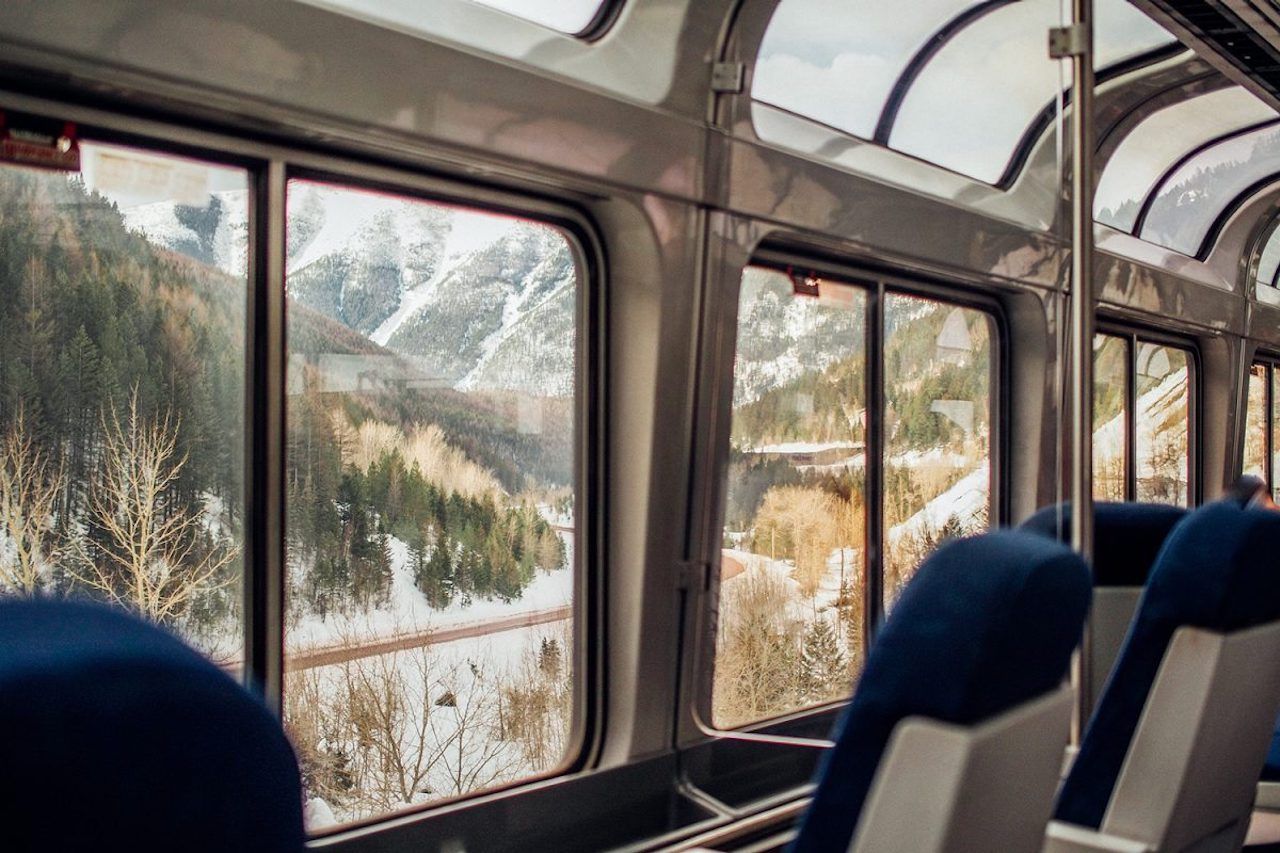 Hop on the Empire Builder from Chicago, St. Paul/Minneapolis, Spokane, Portland, or Seattle, and get yourself a comfortable window seat (or sit in the first-come, first-seated Sightseer Lounge and stare out of the floor-to-ceiling windows if available). The train crosses the northern part of the state of Montana, including the wild and mountainous landscape of Glacier National Park. Amtrak does a little more than passing through, it stops right at national park at the East Glacier Park train station. The train station is just 209 steps from the beautiful Glacier Park Lodge, so you can step off the train and relax among the lodge’s rustic log pillars and open campfire-like fireplaces in a matter of minutes. Note that while the park is open all year long, the train station is only in operation from mid-spring until mid-fall. 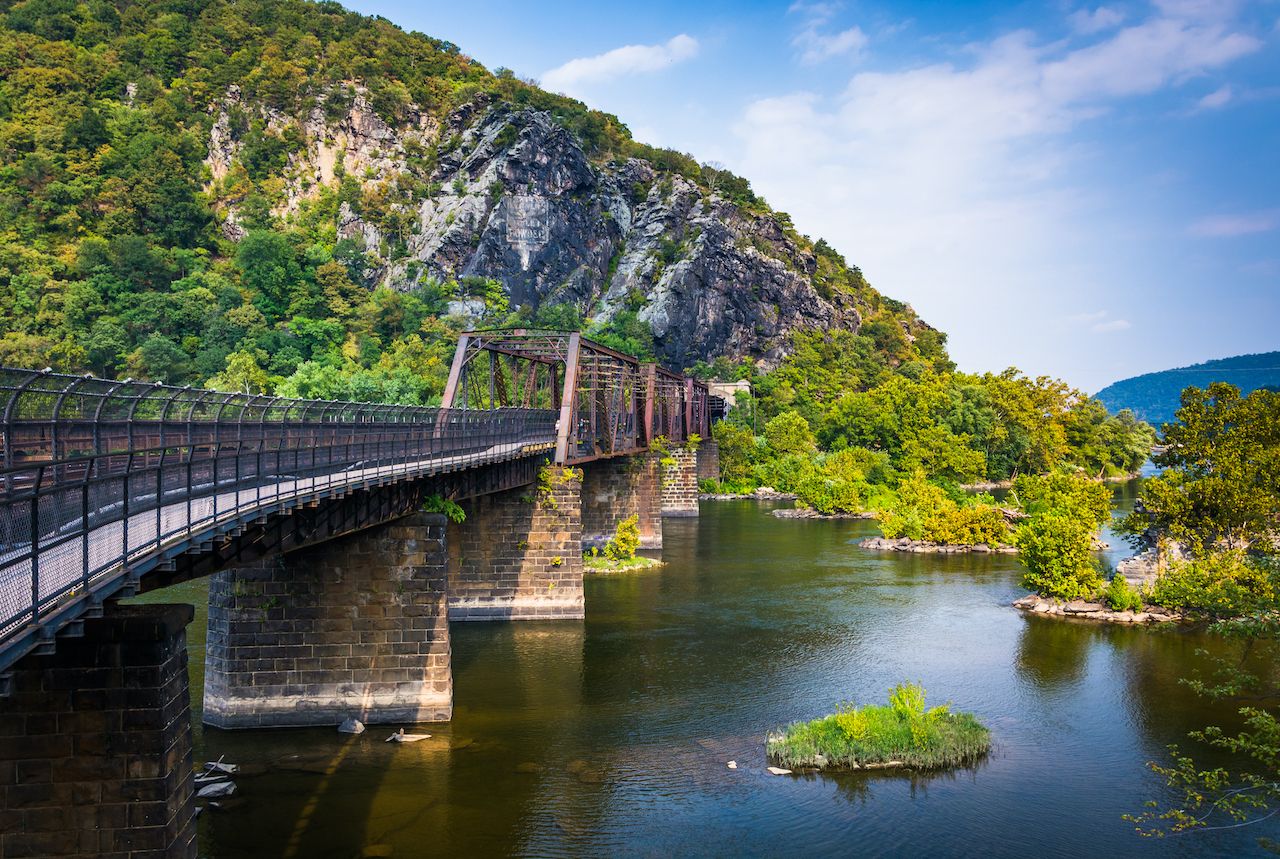 The Capitol Limited runs between Washington, DC, and Chicago and departs six days per week (three days in each direction.) During the 18-hour ride, the train stops at the Harpers Ferry station in West Virginia, a depot that is part of the Harpers Ferry National Historical Park located at the confluence of the Shenandoah and Potomac rivers. The train rides over the famous B&O Bridge from Maryland into West Virginia over the rushing waters of the Potomac River, and offers beautiful views of the mountains of the Blue Ridge. Stop at the Harpers Ferry train station and take a guided tour of the historic town, or lace up your hiking boots and explore the 20 miles of trails within the park (including some across Civil War battlefields). Note that 70 percent of the park is forested so you won’t have any trouble finding peace and tranquility among nature if that’s what you’re looking for. 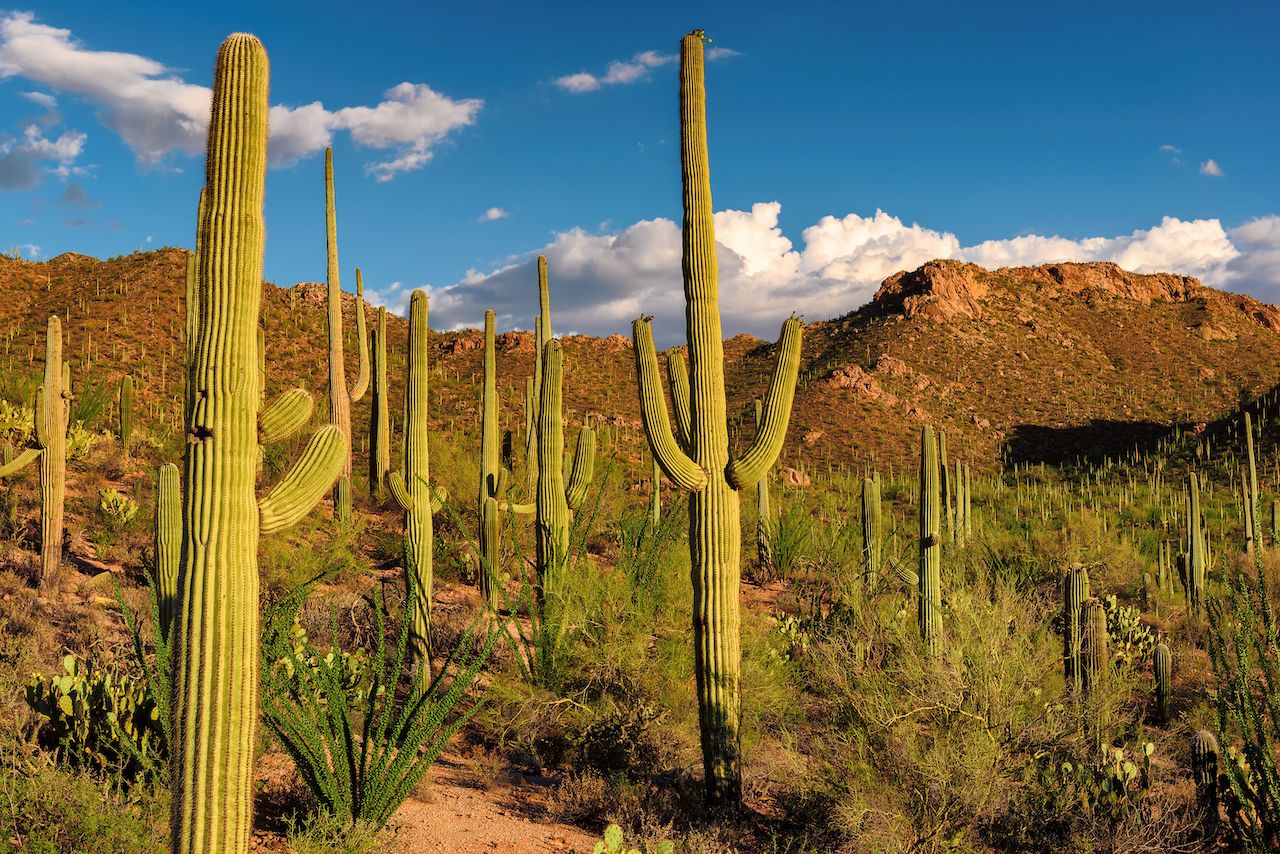 There is unfortunately no train station within Saguaro National Park, but the Sunset Limited Amtrak route will take you right through this beautiful Arizona park. From your window or a seat in the Sightseer Lounge, you’ll get to see the impressive cacti and the desert colors and landscapes that make this park so special. If the view isn’t enough for you and you want to explore the park on your own, get off at the Tucson station — the entrance to the park is fewer than 15 miles away. The Sunset Limited will also get you in close proximity to Big Bend National Park (about 115 miles) if you hop off the train in Alpine, Texas. The Sunset Limited travels between New Orleans and Los Angeles and services San Antonio, Tucson, and Phoenix on the way. 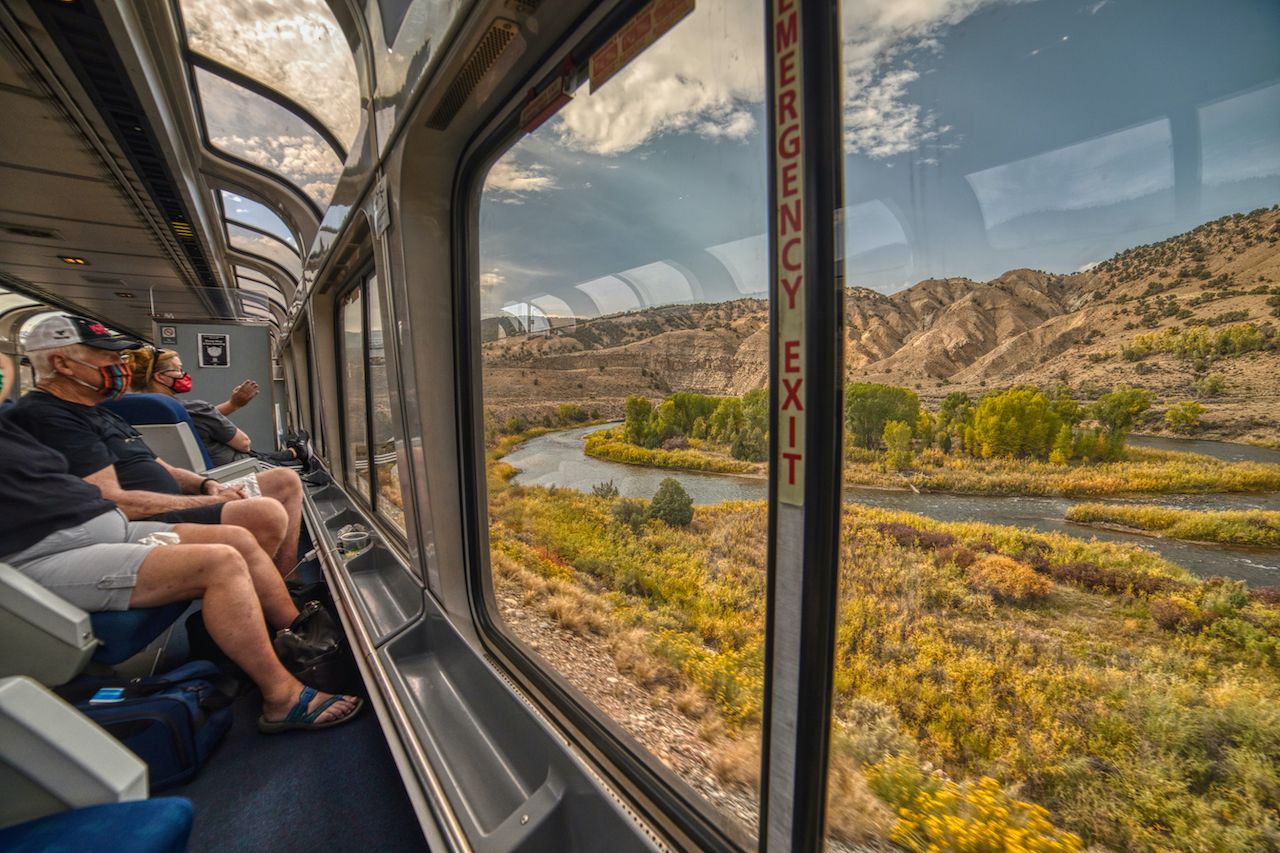 The California Zephyr runs between Chicago and Emeryville on the San Francisco Bay. On its 51-hour journey, the train travels through Colorado, a state that does not lack natural beauty. Right after the train leaves Denver Union Station to head west, passengers are in for some epic views of Arapaho and Roosevelt National Forests on their left, especially around the Fraser-Winter Park depot and the Granby train station. From Grand Junction all the way into Utah, take in the grand landscapes that make the American West famous through Colorado National Monument. 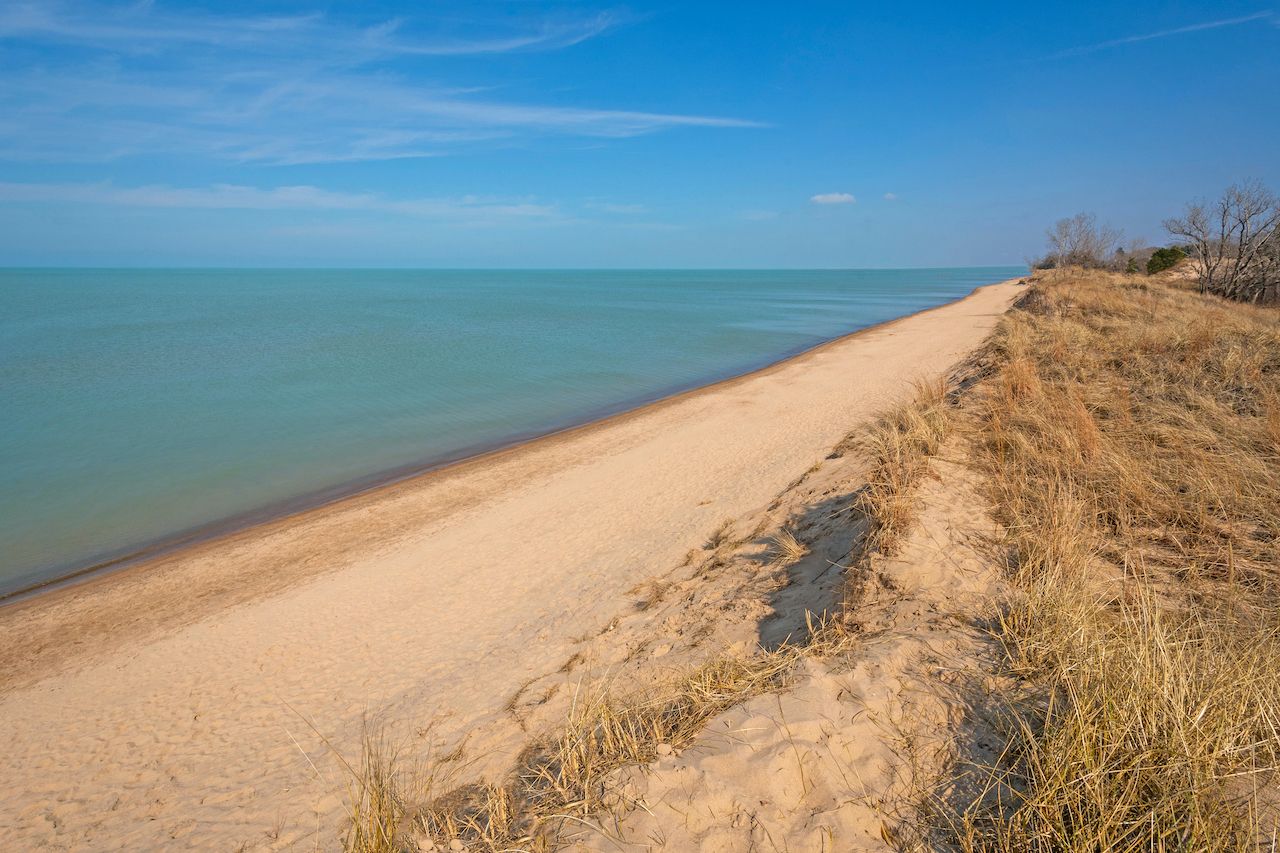 The six-and-a-half-hour train journey between Chicago and Pontiac offers some unexpected natural beauty along the way. Sit on the left side of the train and keep your eyes peeled for stunning views of the 61st US National Park soon after departure. Between Hammond-Whiting station and Michigan City station (the second and third station on the line), you’ll ride along the southern shore of Lake Michigan and across beautiful Indiana Dunes National Park, designated in February 2019. If you want to visit the park, hop off the train at Michigan City — you’re just a couple of miles away from the entrance and Mount Baldy.

Train Travel7 Reasons Your Next Trip Should Be by Train
Tagged
National Parks Train Travel United States
What did you think of this story?
Meh
Good
Awesome