When you think about the flavors in bourbon, there’s a good chance you’re not thinking about a pack of Craisins, some hazelnuts, and a thick slice of Parmigiano-Reggiano. Yet for a recent tasting with Woodford Reserve — done via video chat, as is the norm these days — these were the foods used to explain the flavor profile of the United States’ signature spirit, along with chocolate, honey, and orange.

Bourbon is without a doubt the liquor most associated with the US. It’s what Cognac is to France, or baijiu to China, or soju to Korea. It’s made across the country (most famously, but not exclusively, in Kentucky) and inspires musicians to write songs and rich people to pay thousands of dollars for a single bottle. Most importantly, though, the spirit is a drink to enjoy for a simple reason: It tastes good and there are flavors there that will please all types of palates.

“The beauty of a balanced bourbon is there are over 200 flavors in a bottle,” Elizabeth McCall, Woodford Reserve’s assistant master distiller, said just before the video tasting started. “I look at it like a diamond, which is essentially clear, but you can see colors like yellow and blue [as you look at it closer].” When you thoughtfully taste a bourbon, there are loads of flavors you pick up on beyond it just tasting like, well, whiskey. 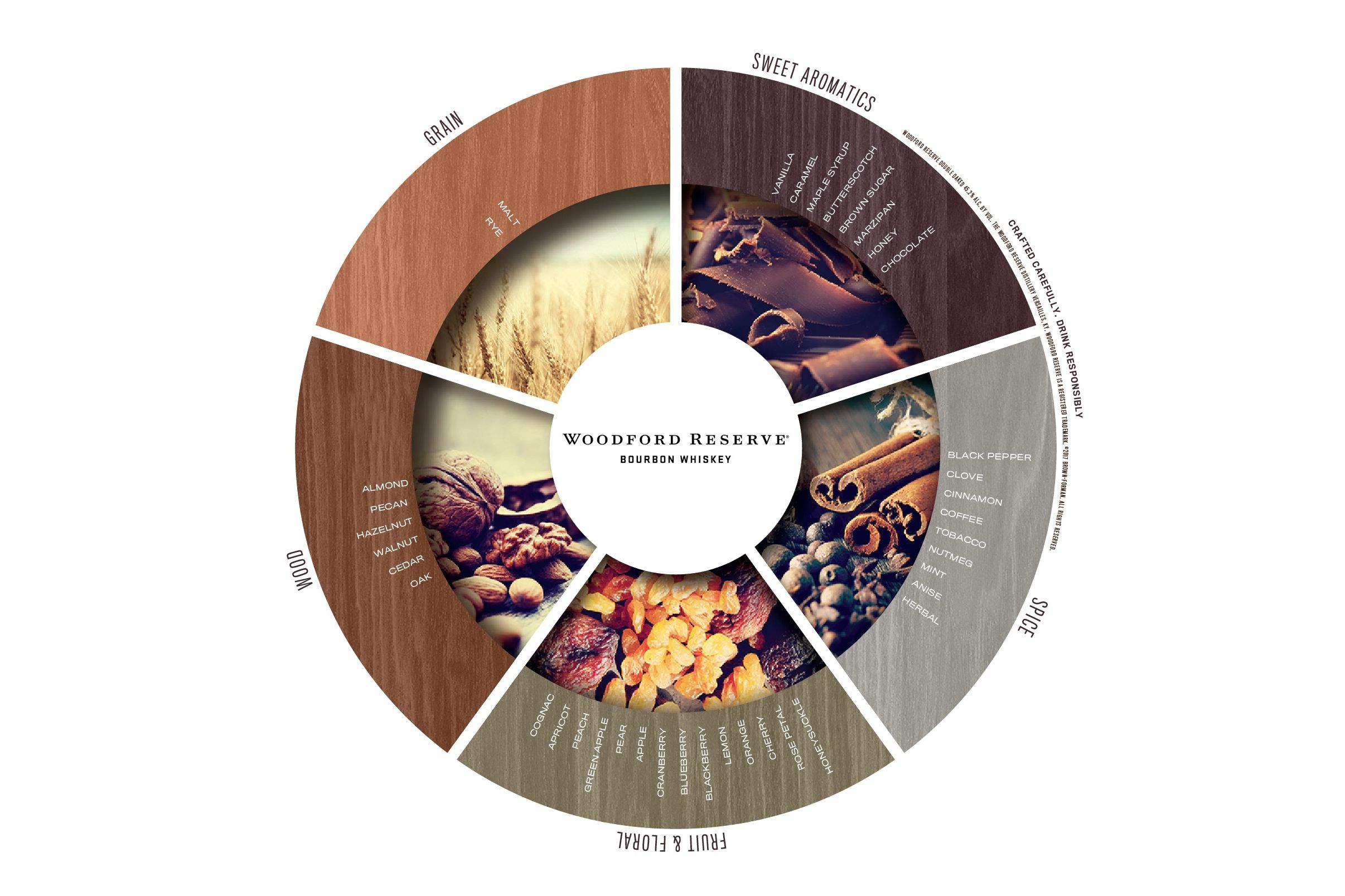 There are five basic points on a flavor wheel for modern bourbon, according to Woodford Reserve’s master distiller Chris Morris. Those categories are sweet aromatics, grain, wood, fruit and floral, and spice. Some relate to foods that mix well with the spirit, like orange, while others compliment the flavors, like sorghum or Parmigiano-Reggiano.

Organized tastings that include food could help new drinkers find what they like best. At the same time, it can help experienced drinkers make the most of the whiskey they have on hand by inspiring cocktails that highlight certain notes. But first, it’s important to know the basics. This is what to know about bourbon to fully experience the spirit.

To start, you need the proof.

It’s easy to pick up a glass and describe bourbon as sweet (which is true, sometimes) or that it burns the back of your throat, but properly tasting a bourbon starts with first looking at the bottle.

“It seems that most people just pick up a bottle and take a sip,” says Brian Facquet, founder and distiller at Prohibition Distillery. “They never look at the proof. They then judge the whiskey unfairly and miss all of the viscosity of whiskey left at high proof and the nuanced flavors.”

Prohibition Distillery’s bourbon is bottled unfiltered at 92 proof (46 percent alcohol by volume). Facquet says this is to allow the whiskey to be in it’s “natural state,” but he has found that high-proof whiskey can hide imperfections. So he adds a little room temperature water to it when tasting to bring down the ABV.

“I find that the lower the proof the more the whiskey speaks to you,” Facquet says.

By definition, bourbon must be aged in new American oak barrels (and for at least two years to be labeled straight bourbon whiskey). The time spent in those barrels is a large part of what gives bourbon its signature flavor.

“Most distillers will tell you that somewhere between 60-80 percent of the flavor or the heart and soul of bourbon comes from the maturation process,” says Trey Zoeller, the founder and chief strategist for Jefferson’s Bourbon. “Once you have a great base from the distillate the barrel is king.”

The flavors from the barrel are different at two years than at five years, 10 years, or 25 years. In general, the whiskey gets smoother over time, but there’s a point in every whiskey’s life where age gets the best of it.

“There is always an apex to a bourbon’s life, and then you start to get diminishing returns [if it’s left in the barrel],” Zoeller says. “Older is not necessarily better.” 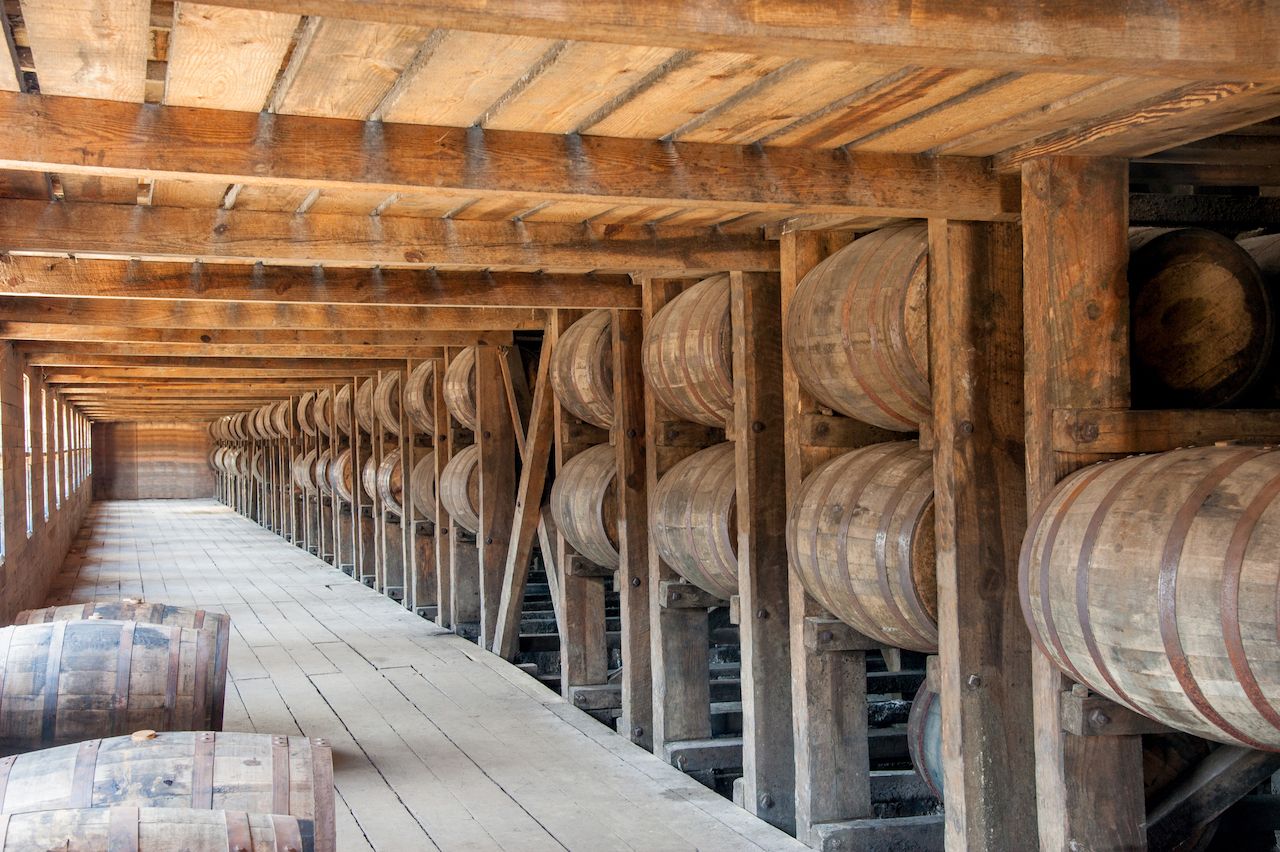 High West’s master distiller, Brendan Coyle, says the idea that older is better is one of the biggest misconceptions people have about bourbon.

“Older bourbon leads to heavy caramel, vanilla, and sweetness, and eventually covers up the fresh distillate character,” Coyle says. “If that’s all [distillers are] doing then [they’re] missing a huge opportunity.”

Complicating the equation of time and bourbon is the fact that not all aging is equal. Bourbon ages differently depending on where it’s stored, so the Goldilocks age of perfect flavor is different for every brand. In other words, don’t go searching for the oldest you can find. A bourbon that’s pulled out of the barrel at the right time has a complex balance of flavors from the barrel and the fruity, floral flavors from the mash bill and the yeast. The best way to find what you like best is to try as many ages and styles as possible.

Corn is crucial, but the full flavor comes from the blend.

“You can have a bourbon that’s 100 percent corn, but it would be a little one note,” says Andy Mansinne, the vice president of brands at the Indiana distilling company MGP. By law, bourbon has to be just 51 percent corn. The rest can be made up of distillate from rye, wheat, and malted barley. The various blends from distillers in the US is what makes bourbon such a diverse spirit.

MGP, for example, is perhaps best known for its rye whiskey that’s used by brands like Angel’s Envy, Redemption, Templeton, and others. MGP recently released its own bourbon with a high rye percentage called George Remus Straight Bourbon Whiskey, which is a blend of two bourbons. One is made with 21 percent rye, 4 percent malted barley, and 75 percent corn, while the other is made with 36 percent rye whiskey, 4 percent malted barley, and 60 percent corn.

“That’s the creativity, the secret sauce if you will,” Mansinne says.

A proper blend ensures that one variable (the mash bill, aging time, or the barrel, for example) doesn’t dominate, which results in a more balanced spirit.

“All of those factors impact the flavor, with the barrel char level and raw ingredients having the greatest impact,” says Victor Yarbrough, CEO of Brough Brothers Distillery. “The corn gives our bourbon its sweetness and apple notes. The barrel produces a hint of vanilla to our bourbon and the rye gives our bourbon it’s spice note.”

So what’s the best way to drink bourbon?

At the end of the tasting with Woodford Reserve, Morris made a couple of simple highball drinks with whiskey, ginger beer, and tonic. He explained that whiskey was reserved for winter months when he was first coming up in the industry decades ago, while lighter spirits were for summer.

Today, it’s less about the seasons and more about how you decide to drink it. Zoeller, from Jefferson’s Bourbon, tastes bourbon neat and typically drinks it for pleasure over a big ball of ice. Many bourbons that taste lovely neat are also in part designed for cocktails, like Brough Brothers’ bourbon. There’s certainly nothing wrong with preferring bourbon in a cocktail like an old fashioned, Manhattan, mint julep, or whiskey sour.

Zoeller says it best when it comes to how to drink bourbon: “Any way you like it.”