Just because the snow is melting doesn’t mean the chairlifts stop running. Bike parks are popping up at mountain resorts across the US and Canada, and you don’t have to be an expert to ride them. A good mountain bike park offers both downhill trails that challenge your technical skills and cross-country trails that test your endurance. If the park crew mixes in a collection of berms, bumps, and trestles, that’s a recipe for pure success. You can find solid bike parks at ski resorts across the country, but these are the best parks in North America to build your trips around this summer. 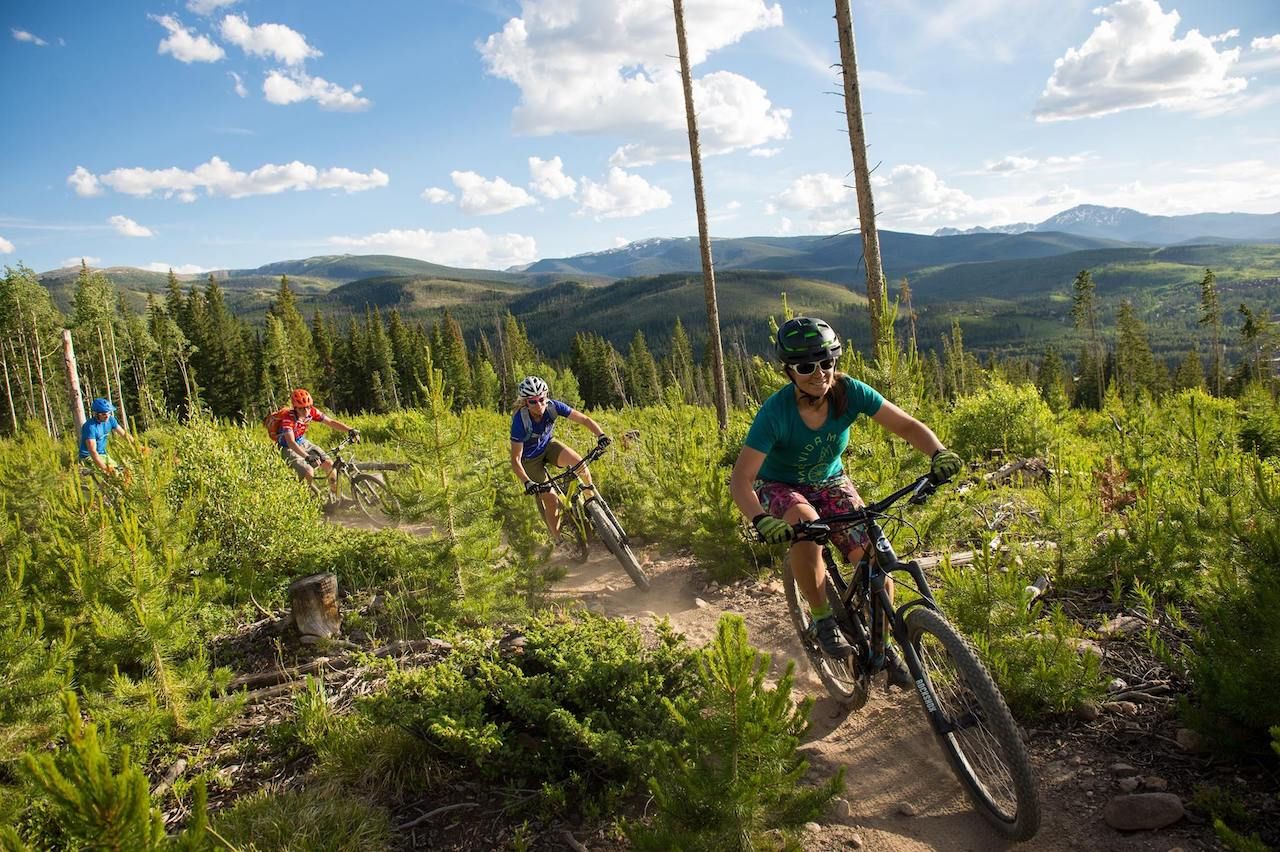 A native Coloradan will tell you that despite its name, Winter Park is actually more awesome in the summer, and the primary reason is the resort’s epic Trestle Bike Park. This is the place to experience downhill riding in its big-league form — a procession of pro riders, a massive trail system, and drop-ins from nearly 11,000 feet are all on display. Winter Park has streamlined the resort downhill experience better than any ski area in the United States. While most resorts only open one, maybe two, lifts in the summer, Winter Park offers 50 runs accessed by three separate lifts.

You may be intimidated when you arrive at the parking lot, which is likely to be lined with seasoned bikers in full downhill gear completing last-minute tunes or spraying down their tires while the rapid-fire rhythm of hard rock music ricochets off the surrounding peaks. A look at the trail map won’t do much to settle your nerves, as the park is lined with expert terrain. But there are also several mellow cruisers and family-friendly trails where your crew can ride in succession. If butterflies do overtake your stomach, the best way to pop your bubble of inferiority is to get advice from the locals. You’re in the mountains, after all. People are friendly here even when their helmets are on, and most riders will be stoked to share their advice for the perfect day on the hill.

Another cool thing to do at Winter Park is to bring your camera and watch the sponsored riders rip down Banana Peel, among the most technical and physically demanding downhill tracks in the country. Unless you’re on their level, you’re actually relegated to the sidelines of the pro line because in order to ride it you have to take an orientation class, sign a liability waiver, and promise that you’re as good as you say you are. Otherwise, you won’t get past the drop-in. 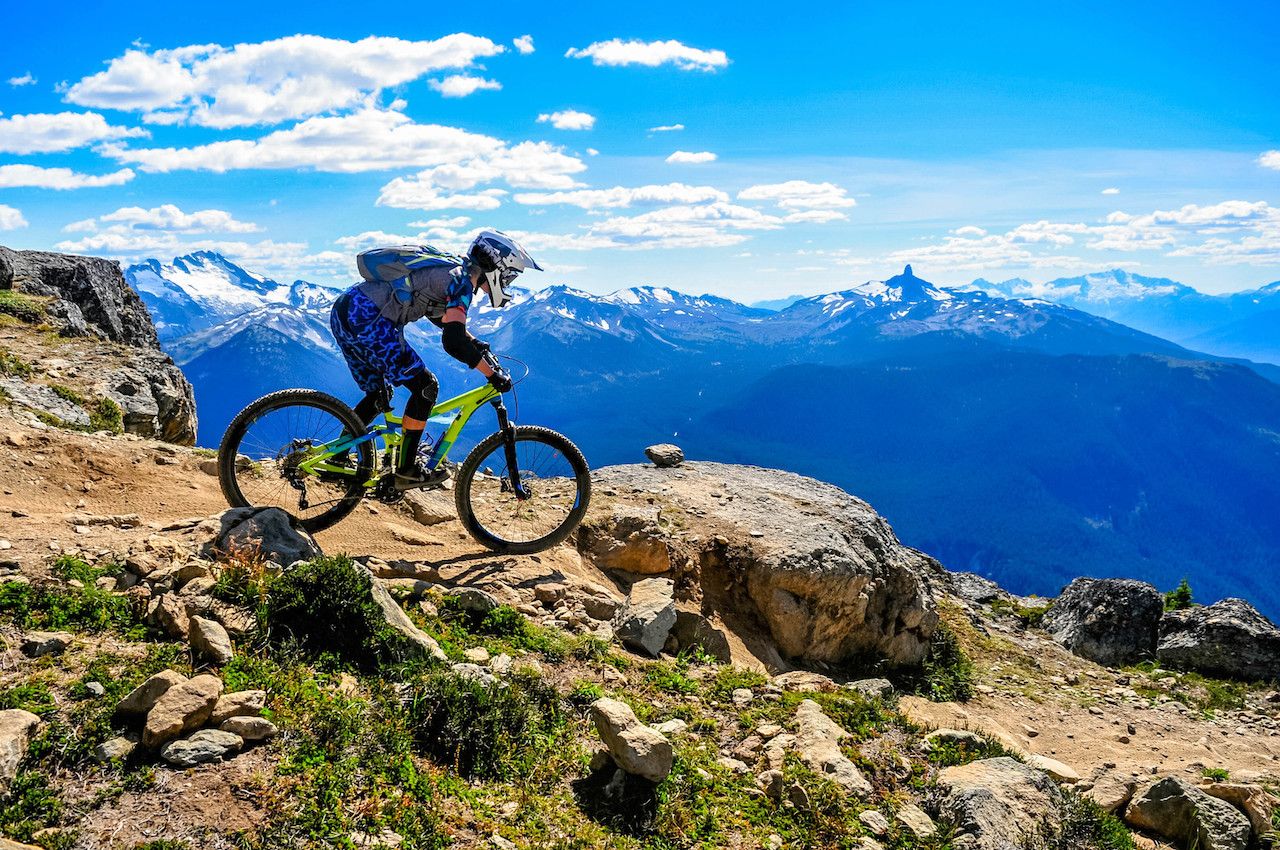 Like the ski resort itself, Whistler Mountain Bike Park is huge. A trip here necessitates no fewer than three days on the mountain, and the 2018 opening of the Creek Zone and Creekside Gondola for summer use added three intermediate trails and an expert-level Delayed Fuse singletrack to the resort’s already sizable destination bike park.

Your first must-do is the Top of the World Trail in the Peak Zone. After you’ve thoroughly stared in awe at the spired peaks of BC’s Coastal Range, you’ll drop in from the top of Whistler Mountain to the most scenic ride of your life. After safely navigating the high terrain, set your sights on completing the A-Line trail, a firm seal of badassery in the downhill world. To make this happen, you need to be fresh, loose, and confident. Warm up for a day or two in the Fitz Zone to get familiar with the terrain, then drop into A-Line first thing on your final day in town.

Afterwards, take advantage of the fact that Canadian mountain towns have embraced the Nordic spa experience with a vengeance. Crush any toxins that you haven’t already sweated out with a hot-cold immersion at Scandinave Spa. Whistler also offers the perk of being one of the only resorts where Mother Nature often leaves snow sticking around into June at the alpine elevations and the park builders generally have trails ready to go in May, you might be able to ski and mountain bike in the same day. 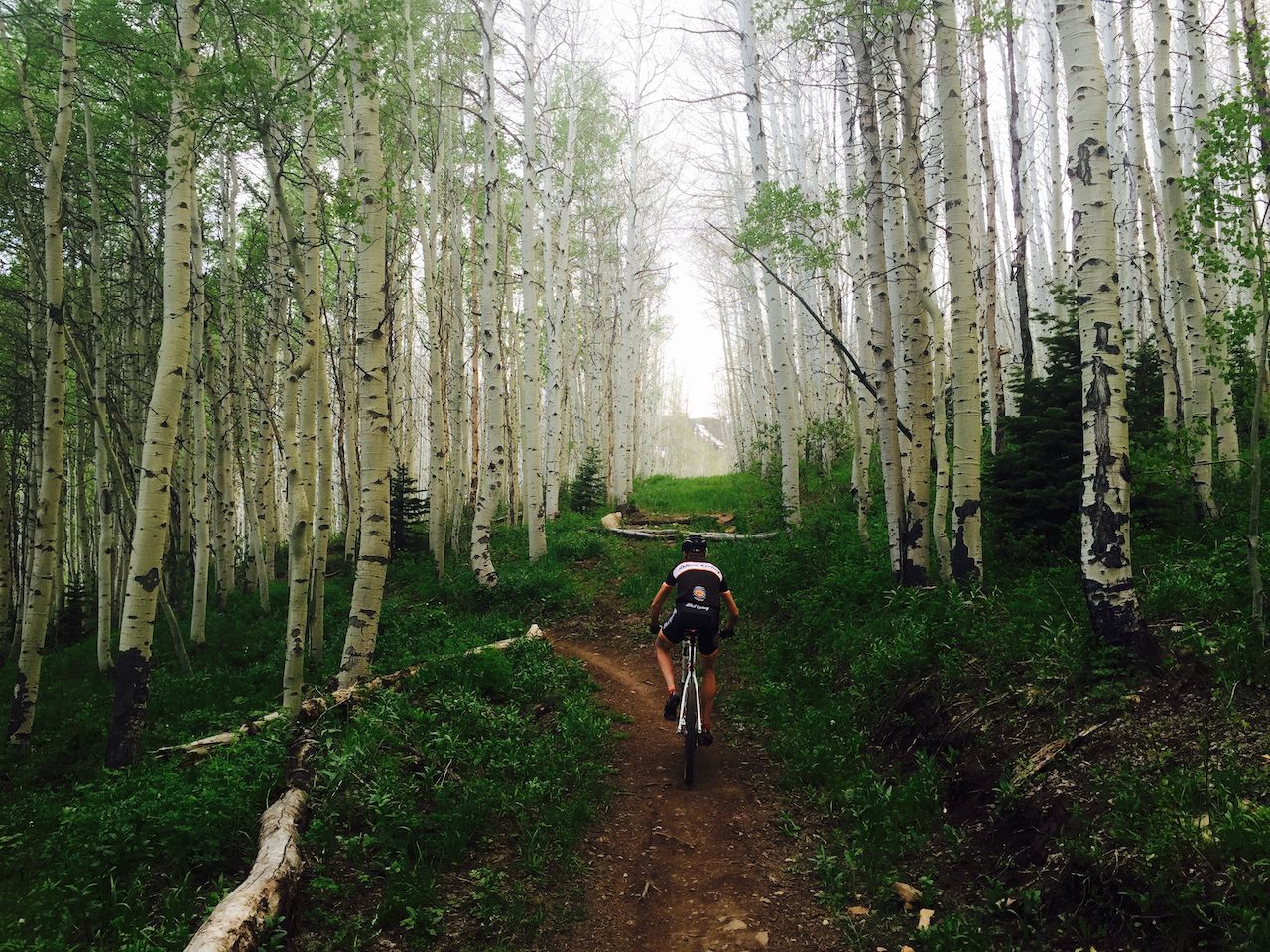 Park City’s biggest pull, beyond the bike park itself, is its close access to Salt Lake City International Airport just 40 minutes away. The other bonus is that you get two-in-one here now that Park City Mountain and Canyons Village have merged into one massive resort. On the Park City side, mountain biking happens off the PayDay express lift, leading you to 450 miles of trails both on the resort and in the surrounding backcountry. Be sure to hit the IMBA Epic Ride and get out on the trailhead first thing in the morning if the weather cooperates.

At Canyons Village, the Red Pine Gondola offers access to cross-country-style trails where you’ll actually do some real pedaling. This is a more mellow experience for riders not looking to fly over their handlebars on a downhill track. 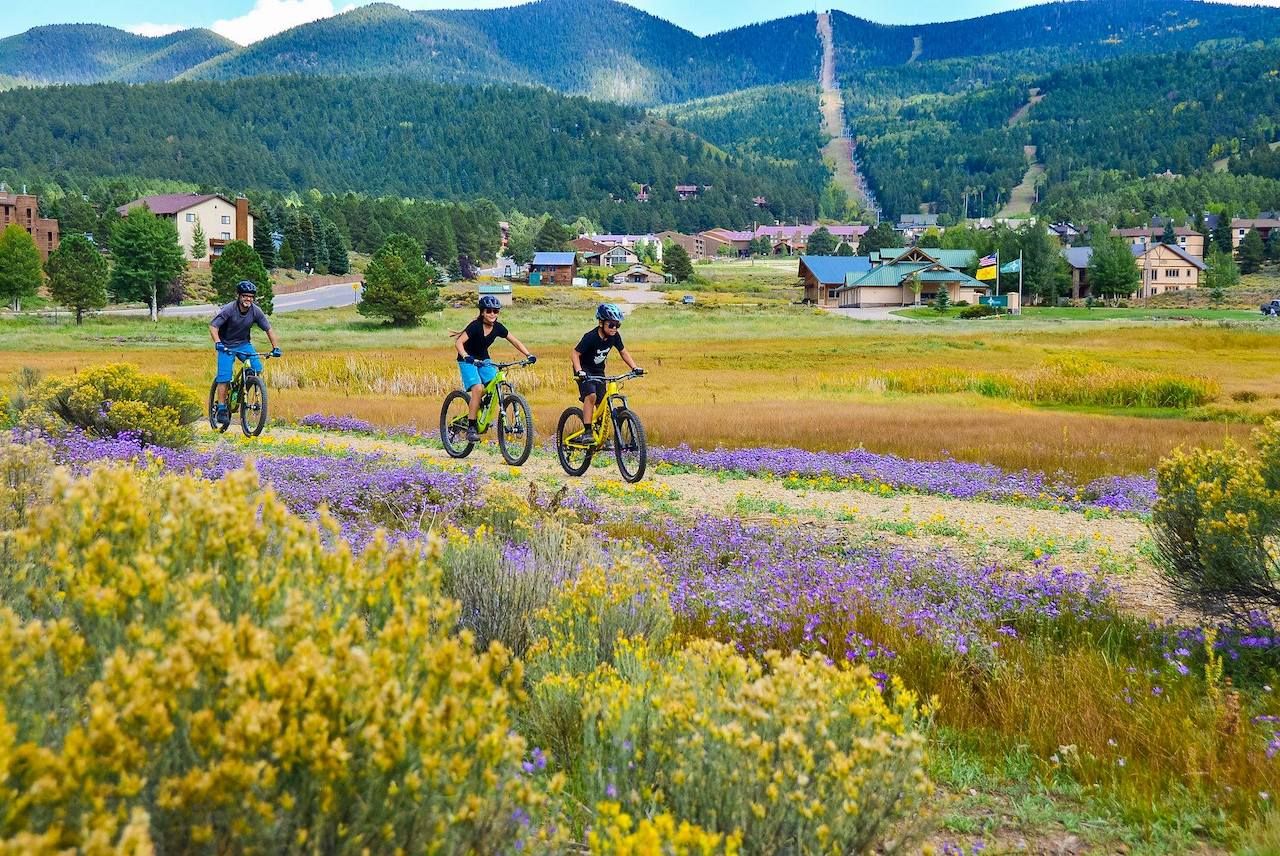 Beyond Taos, a handful of New Mexico mountain towns have been making a big push to get their state the recognition it deserves in the outdoors community. Angel Fire is the latest example, having doubled the size of its bike park in recent years to become the largest in the Rocky Mountains. They now offer over 60 miles of dedicated trail among one of the most comprehensive on-mountain bike trail systems in North America. This is the place to head when you have a group with diverse interests and talents since it has jump lines and burns for freestyle riders; bumpy steeps for downhill enthusiasts; and three long, winding pushes that are perfect for beginners and families.

If you’re a fan of earning those turns, hit up the Angel Fire’s Enlightenment Trail, the best cross-country track of any mountain resort in the country, hands down. Plus, Angel Fire is the coolest name for a mountain town since Chamonix, so it might actually be worth picking up a t-shirt from the gift shop before heading home. 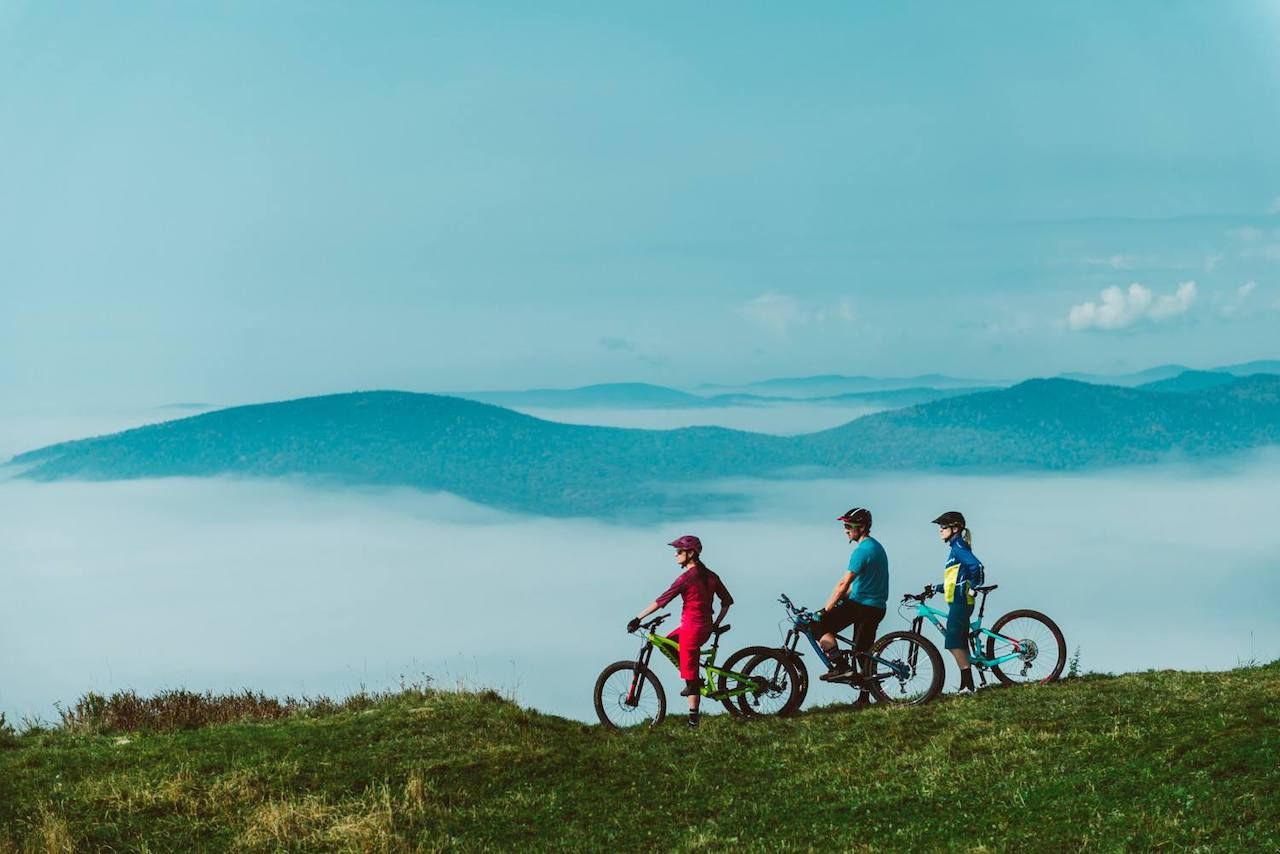 Eastern Canada isn’t top-of-mind for most mountain enthusiasts. Mont-Sainte-Anne is proof that it should be, particularly in the summer. Located just outside of Quebec City, the bike park is the best on the east coast purely because of its access. A ride up the gondola puts you atop 19 miles of downhill, with another 80 miles of cross-country trails on-mountain and adjacent.

Right at the base of the resort is the popular pump-track, where you can push around a bern-and-bump-filled circle to your heart’s content as a warm-up or cool-down after a day on the hill. Trails are cut into both sides of the ridge-shaped resort, offering expansive views of the St. Lawrence River to the east and Jacques Cartier National Park to the west, winding through thick meadows and dense forest across some of the flowiest terrain on the east coast. Downhill riders should be sure to hit The World Cup Trail, known in local parlance as Le Coup du Monde. On the endurance side, both L’Adorila and La Bouttaboutte will have you screaming ”Oui!” all the way back to the parking lot.

CyclingHow To Plan a Summer Mountain Bike Trip To Andorra
Tagged
Cycling Insider Guides
What did you think of this story?
Meh
Good
Awesome