New York has no shortage of world-class museums (MoMA, The Museum of Sex, etc.), but for a non-traditional museum experience, head across the Hudson. The TiLT Museum in East Rutherford, New Jersey puts visitors inside the art — literally.

TiLT launched in 2021 as the brainchild of street artist Tracy Lee Stum. Alongside a team of artists, Stum created 25 paintings that double as optical illusions. These artworks range from a snake-surrounded Chutes and Ladders to a Statue of Liberty primed to be climbed. Housed in the American Dream Mall, TiLT is a museum that lets you get up close and personal with any painting. Here, you don’t have to worry about crossing the velvet ropes and setting off any alarms — you can step right inside the artwork.

Knowing how to play into the pieces’ illusions requires a fair share of creativity. To help you get the most out of your visit to the TiLT Museum, we spoke to Tracy Lee Stum.

The museum is open daily, from 11 AM, however, the hours of closing depend on the day. You can visit the TiLT Museum until 8 PM on Sunday, 9 PM from Monday through Thursday, and 10 PM on Friday and Saturday.

General admission costs $20, with senior and military discounts available. Children under two get in for free. You can either order tickets online ahead of your visit, or buy them at the counter when you walk in.

The best times to visit the TiLT Museum

Come on a weekday, and come early. During the summer, the museum tends to be crowded most days, but, according to museum staff, it especially picks up around 1 PM. Once school is in session, however, weekends are TiLT’s busiest days. So plan accordingly if you’re hoping to have the artwork to yourself.

Getting to and parking at the TiLT Museum

The TiLT Museum is located inside the American Dream Mall. The mall has no shortage of entertainment options, including luxury stores, an ice skating rink, a Nickelodeon theme park, and a DreamWorks waterpark, just to name a few. With so many attractions, you can easily stretch your museum visit into a day-long excursion.

To get to the museum, New Jersey Transit makes TiLT accessible via bus. If you choose to drive, park in lots B or C, which cost $5 per vehicle. If you only stay an hour, parking is free.

How long should I spend at the TiLT Museum?

Because the museum is self-guided, you can wander at your own pace. To ensure you have ample time with every installation, however, Stum recommends allocating 45 minutes to one hour to your visit. Once you make your way through the museum, you may want to circle back to your favorite artwork.

The #1 piece of advice for visiting the TiLT Museum

For an ideal visit to the TiLT Museum, Stum recommends sharing the experience with friends or family. The museum is all about fun so hop in a scene together and experiment with new poses. It’s also nice to have someone guide you so you’re hitting the right angles for each illusion to come to life.

“Kids love to go crazy on the artwork,” said Stum, who cited children, as well as older people, as the museum’s most enthusiastic visitors. “If you have a group of friends, you can have a group interaction shot and just have a lot of fun with creativity that way.”

And just because your friend stands in the artwork alongside you, doesn’t mean you’ll have to forgo a photo. Ask museum personnel or other wanderers in the room. TiLT is truly a team effort.

Where to start your visit at the TiLT Museum?

Maneuvering around the museum is fairly straightforward, as TiLT consists of just one floor. The museum’s floor plan allows visitors to naturally progress between installations, so you’ll have no trouble navigating it for yourself.

“Start at the beginning and kind of work your way around the museum,” said Stum. “There’s a natural traffic flow that happens there.”

You’ll enter through the gift shop and start at a 3-D painting of a flying hot dog. From there, you can go either clockwise or counter-clockwise, and work your way from one colorful artwork to the next.

What makes the TiLT Museum unique

Interactive art museums have been popular for quite some time, thanks to pop-ups like Meow Wolf and digital Van Gogh exhibitions. While less dynamic than some, TiLT stands out for its hybrid nature; the museum merges the paintings of traditional art museums with the form and fun of interactive pop-ups, presenting fully-finished artworks as inviting illusions.

“This is very different in that you can actually go and touch the artwork,” said Stum. “You can stand in it. You can be part of the art. That’s one of our taglines.”

To keep the paintings durable for many feet, TiLT uses acrylic paint, covered with a protective coating. Other than standard wear and tear, this approach helps the paintings withstand any number of poses. So step on up, lay down, take a seat, or do a handstand. You won’t ruin the art.

How to best capture the TiLT’s Museum illusions on camera 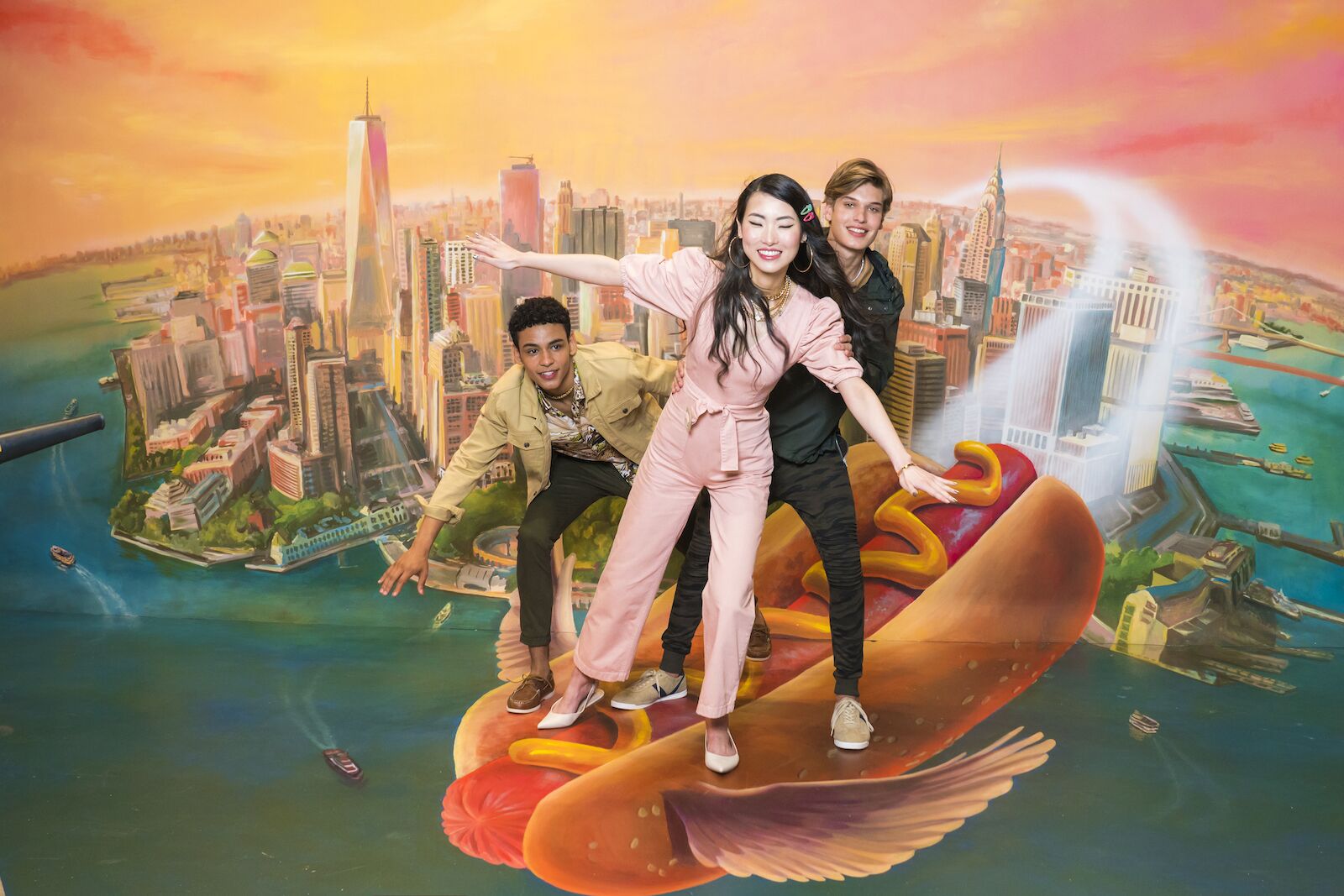 There’s no right or wrong way to engage with TiLT’s displays, but if you’re looking for inspiration, the wall text has your back. Beside every painting you’ll notice a picture and a corresponding instruction manual. These are intended to help you interact with each piece — though they’re certainly not the only ways to engage with the works. In fact, Stum encourages visitors to think outside the box.

Likewise, camera decals along the floor delineate where the photographer should stand to bring the illusion into fruition. 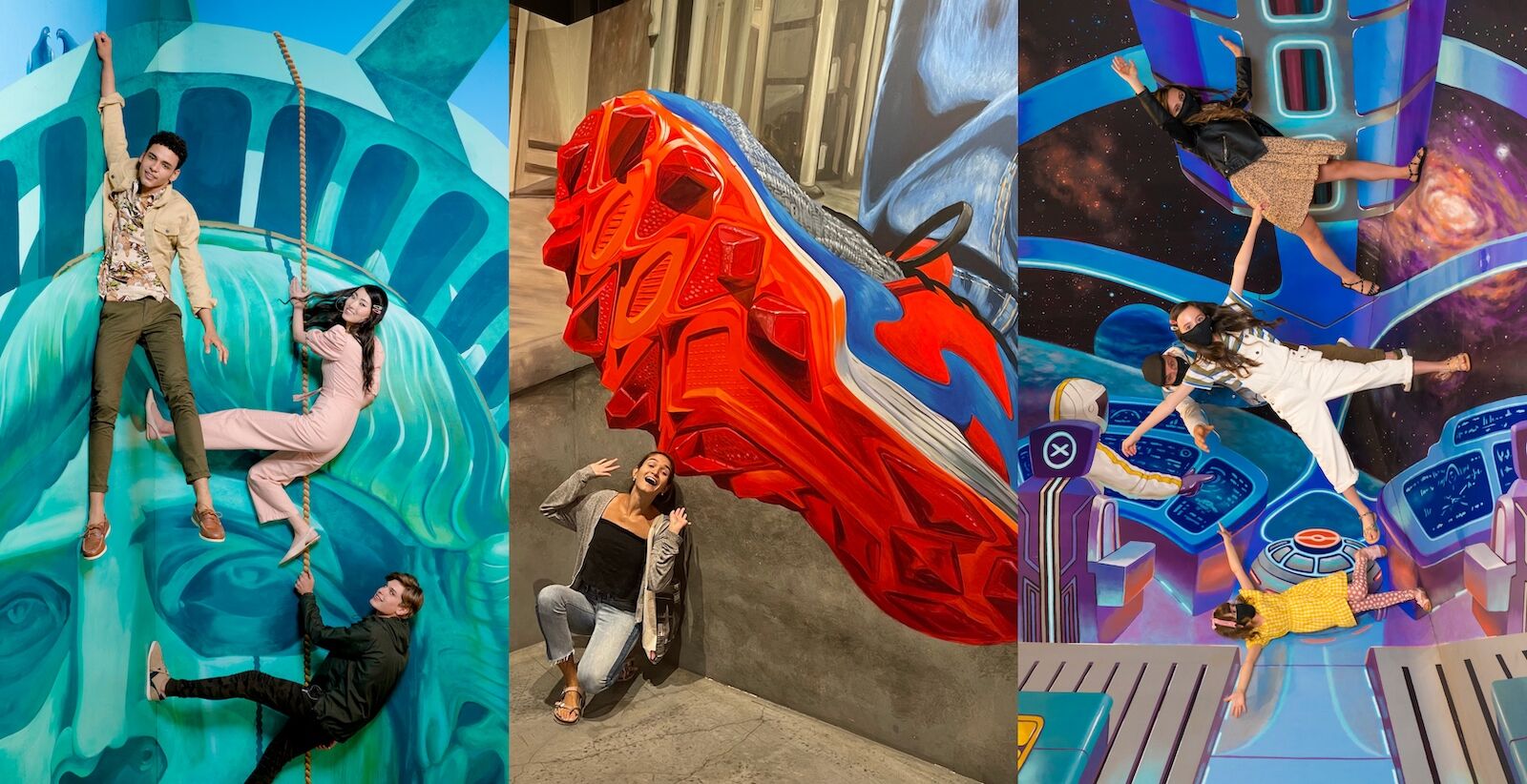 The Statue of Liberty

One of the museum’s first artworks, the Statue of Liberty greets visitors immediately upon entering — but with a twist. Lady Liberty is painted sideways so you stand right atop her nose.

“It looks very confusing when you go in and you look at it,” said Stum, noting that the statue is one of her favorite pieces in the museum.

Once you take the photo, however, rotate it on your phone. With the altered perspective, it looks like you’re climbing up the statue’s face.

In this illusion, you’re directly in a dragon’s line of fire. Simply standing in front of the painting will transport you to a fire pit, and if you angle your arms just so, you’ll soon seize a sword. Ready for battle, you’re poised to defeat the dragon — and become the hero of this action-packed piece. 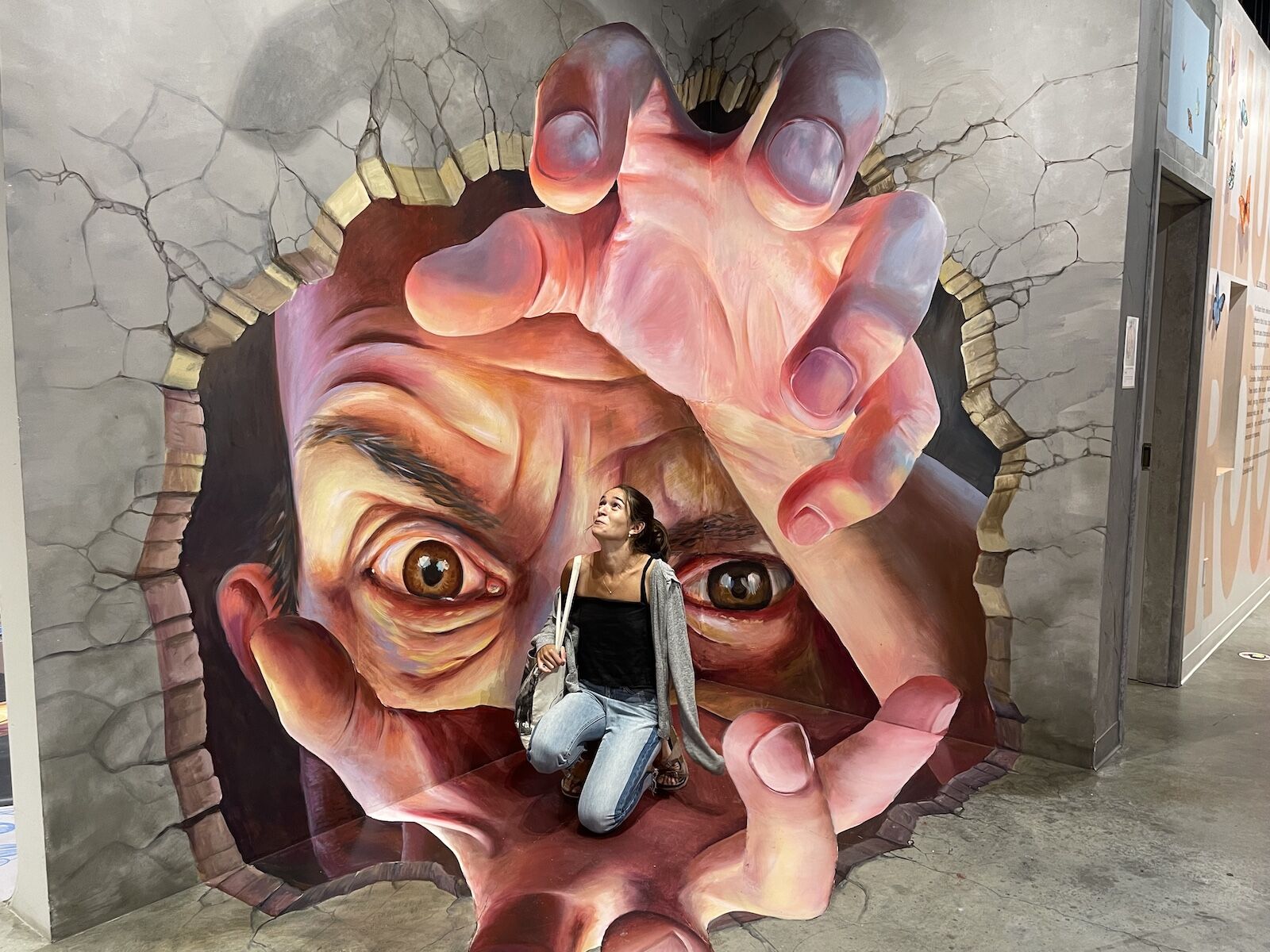 This illusion draws you into a nightmare. The painting features a man — a monster, rather — with wide eyes that peer out ominously. One of his palms is cupped, the other curled into a claw, ready to grab anyone who comes within reach. If you so dare, step between his curled fingertips and take a seat. Once you snap a photo, it will look like you’re caught, quite literally, in the palm of the monster’s hand.

“Splat!” ups the ante of playing with perspective, positioning you beneath a giant sneaker. The painting features a red and blue shoe protruding at the perfect angle for you to crouch down beneath it. Position yourself right under the sole and look up, as though you’re about to be crushed. Here is a 3-D illusion for anyone who’s ever wondered what bugs experience — or visitors who’ve watched the movie Honey, I Shrunk the Kids one too many times. 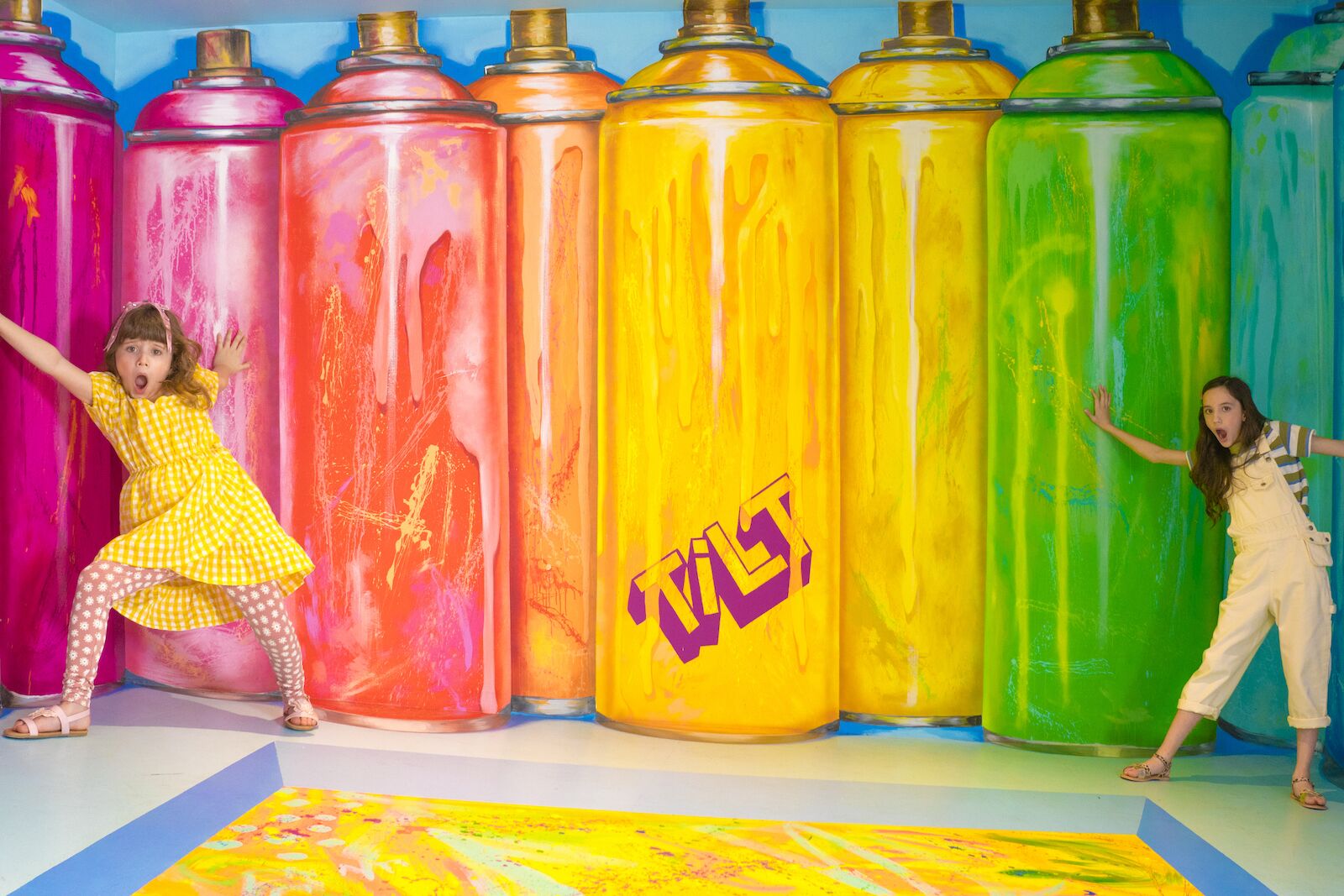 Branching off the main circuit of the museum, The Ames Room begins with a window through which you see a room filled with colorful paint canisters. Inspired by American scientist Adelbert Ames, Jr., the room markets itself as “a distorted room that creates an optical illusion.” Leave your photographer peering through the peephole while you step inside the trick. Press yourself up against the vibrant line of paint, and you’ll grow and shrink à la Alice in Wonderland. If you stand toward the top of the angled room, you’ll look large in comparison to the paint cans. But if you move down the ramp, you’ll become miniscule. This illusion works best with two people for comparison, so have fun with a friend.

What you can skip at the TiLT Museum

While every illusion is certainly worthwhile, some will appeal to your preferences more than others. Aspiring astronauts may flock to “Tilted Space Station,” while large groups could spend an entire visit toying with positions in “Who’s Afraid Of Heights?” Because it’s a self-guided museum, you can bypass any illusion that doesn’t speak to you. You have the freedom to experiment and choose the artworks you want to inhabit.

Tagged
Museums New Jersey, United States
What did you think of this story?
Meh
Good
Awesome