The United States loves its sweets. Historic candy stores and tasteful confectionaries can be found in cities and towns across the country. Purveyors of mass market chocolate abound, and Americans are so fond of their favorite chocolate brands that animated, anthropomorphized M&Ms make frequent commercial appearances. There’s even a chocolate-themed amusement park in Pennsylvania called Hersheypark.

While candy can taste either magnificent or mediocre regardless of what city you find yourself in, there are some parts of the country that stand out as home to the most iconic candy in the US. These five cities have a heavy stake in candy, and some are even the birthplace of now-beloved treats. Grab your dental floss and prepare your sweet tooth: These are the American cities best known for sugary, sweet candy. 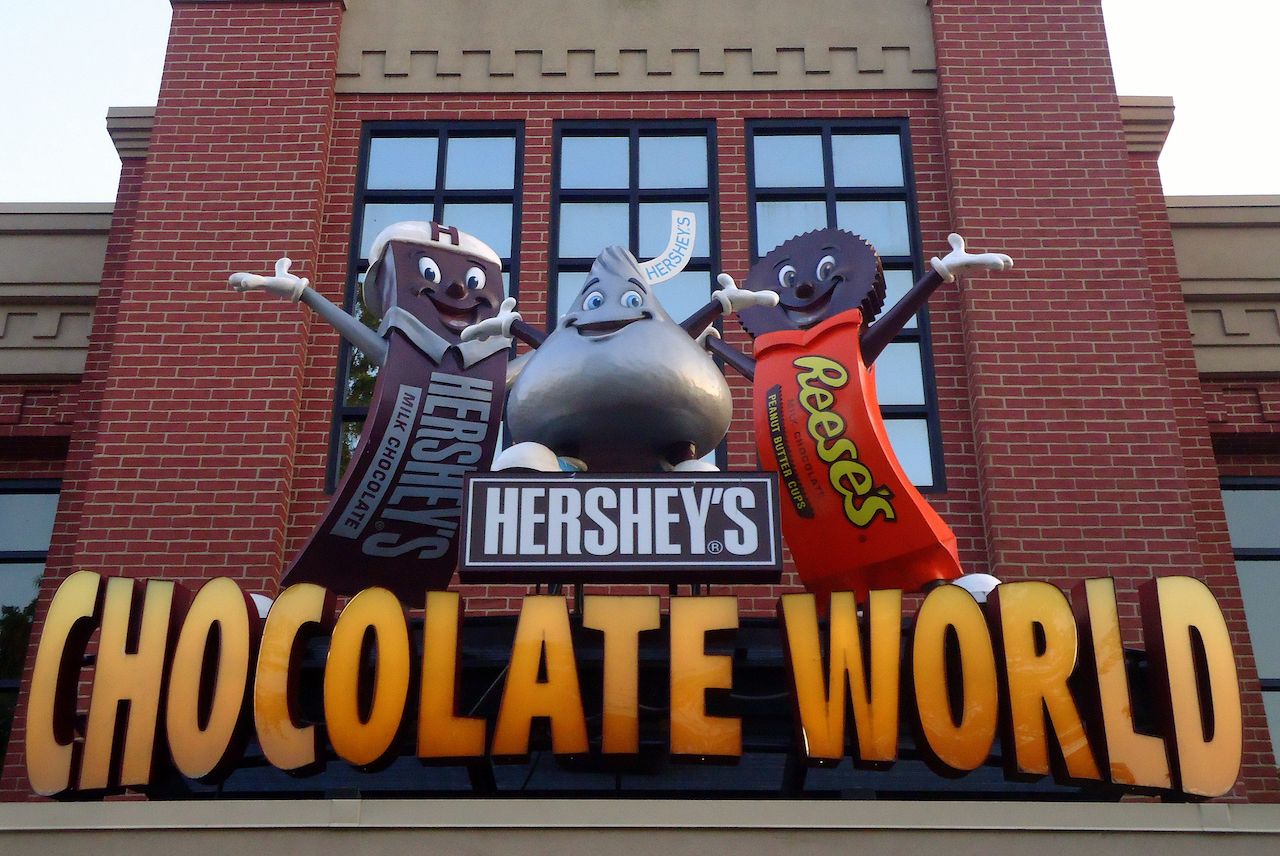 It’s just about impossible to talk about candy in the US without talking about Hershey — especially when talking about chocolate. Whatever your feelings are about the quality of the chocolate itself, it’s undeniable that the closest thing you’ll get to a real world Willy Wonka factory is Hersheypark in Hershey, PA. The park comes complete with rollercoasters, a cafe, a museum, tasting rooms with flights of chocolate instead of wine, and a make-your-own chocolate experience. There’s even a public garden dedicated to chocolate-themed plants like chocolate mint and hot cocoa rose. For adults, there’s the MeltSpa and Chocolate Spa that specialize in chocolate-based treatments. And yes, there’s plenty of candy to just buy and eat, too. 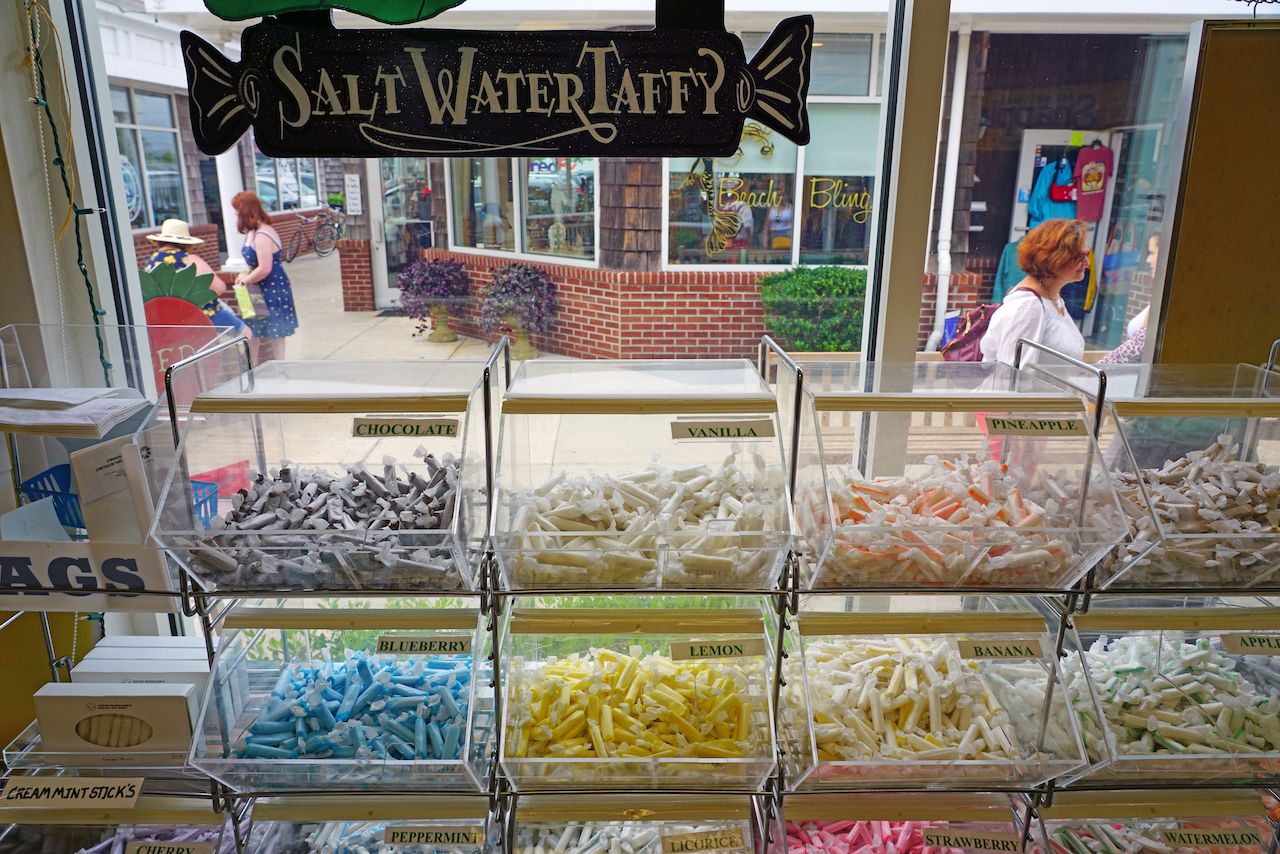 Chewy salt water taffy is at home in Ocean City, NJ. According to legend, salt water taffy itself was invented in the late 1800s just 10 miles away in Atlantic City when a candy shop was flooded with ocean water. The shop owner sarcastically told a customer that the only taffy he had left was salt water taffy, and to his surprise the salty taffy sold, so the story goes. Salt water taffy, however, doesn’t use actual ocean water (some confectioners don’t even use salt). And though the legend centers on Atlantic City, it’s Ocean City that steals the show these days. Stroll the boardwalk for taffy and be sure to visit Shriver’s, which opened in 1898 and today has around 50 different flavors. Also of note in Ocean City for those with a sweet tooth: fudge. Lots and lots of fudge, with flavors like pistachio, chocolate marshmallow, and coconut. 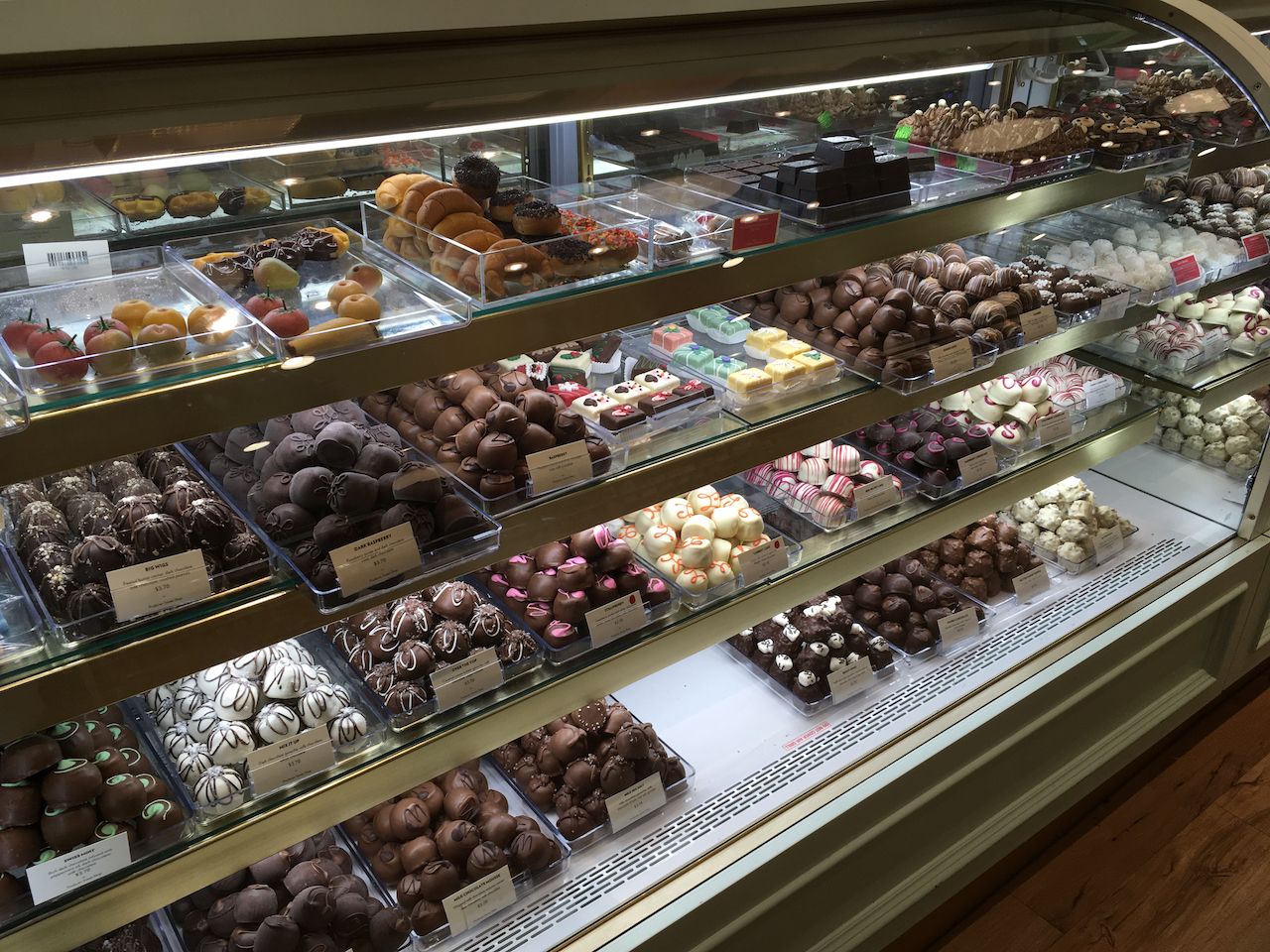 In 2015, a study found that people in Utah eat nearly twice as much candy per person than the rest of the US. There are a number of reasons why, including one Brigham Young University professor’s opinion that the high Mormon population, which stays away from coffee, alcohol, and tobacco, indulges in sweets instead. The same year, Hershey named Salt Lake City the “Sweet Tooth Capital of America” thanks to the massive amounts of chocolate and Twizzlers residents eat. And where there are lots of candy lovers, there are candy makers. Salt Lake City has a thriving artisan chocolate community and candy stores like Caputo’s that focus on Utah-made chocolate. The producers and shops centered in and near Salt Lake City led to Saveur naming the area the “epicenter of chocolate innovation” in the US. 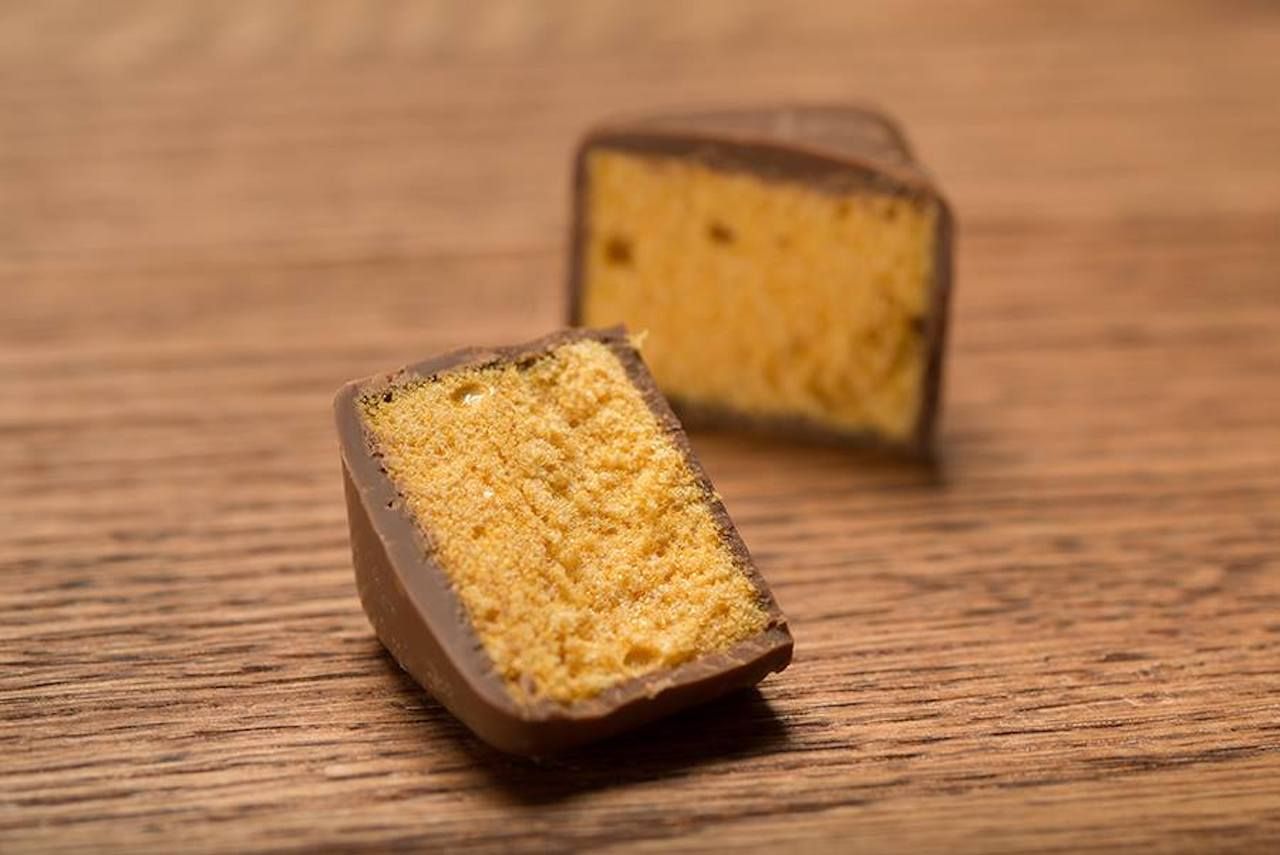 Buffalo wings, not candy, are the first food that most people think of when they think of Buffalo, NY. Deservedly so, as the story of how Buffalo got its wings is endearing, and the dish defines proper bar food in the US to this day. Yet it has a sweet claim to fame as well: sponge candy. Sponge candy is made with sugar, baking soda, and corn syrup or molasses. The result is a crunchy-but-airy toffee, and in Buffalo, that toffee is covered in chocolate to make the city’s famous sponge candy. Similar variations (sometimes without the chocolate) can be found in New Zealand, where it’s called hokey pokey, as well as Britain and Australia. One of the oldest and most classic places for Buffalo sponge candy is Fowler’s, which opened in 1910. 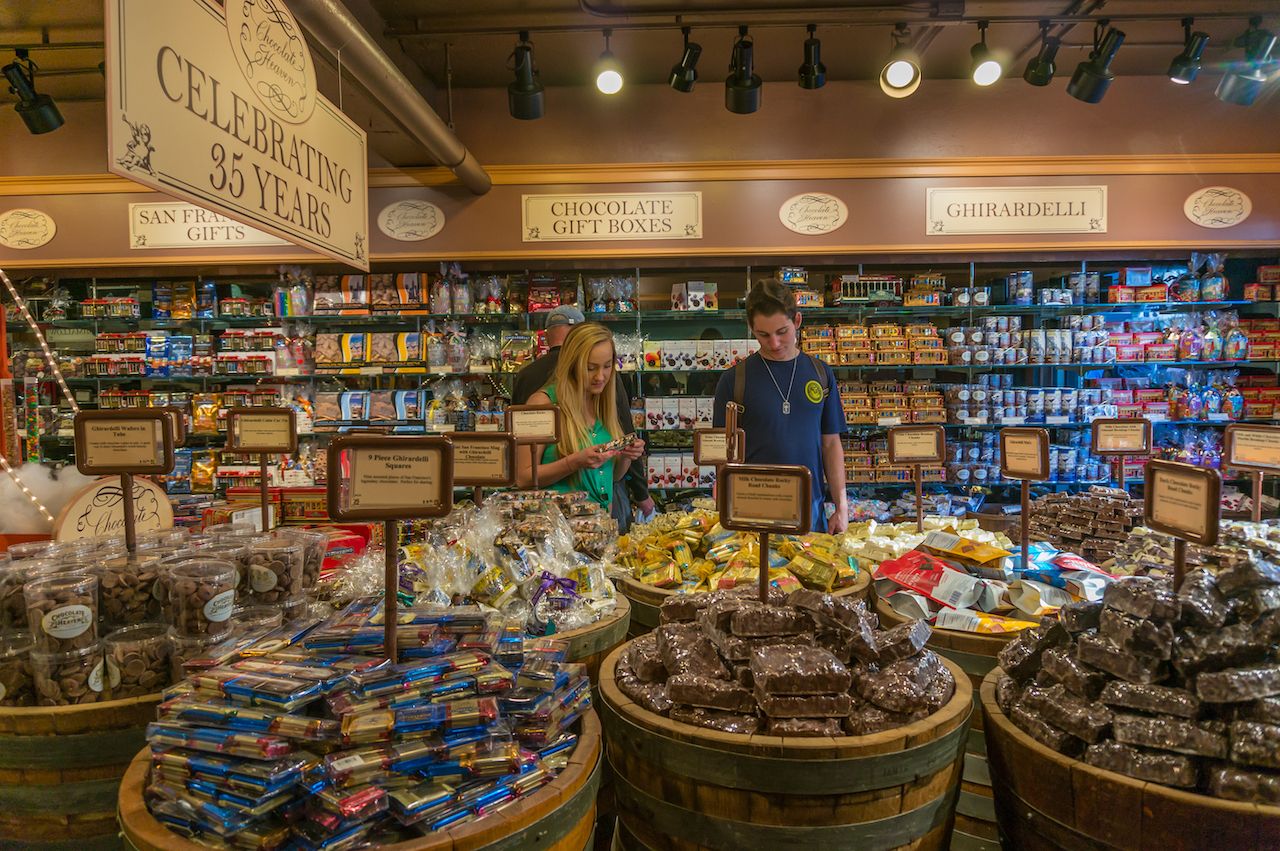 Many large cities in Europe and the US have reputable chocolate businesses. Places like New York City, Paris, and London attract the type of people who open bean-to-bar chocolate shops, as well as the type of people who frequent those shops. San Francisco stands out among these cities for its long history with quality chocolate. The city by the bay is where Ghirardelli, the oldest continuously run chocolate factory in the US, got its start in 1852. It’s also home to the oldest family owned chocolate factory in the US, Guittard, and Scharffen Berger, the first US chocolate company to put the cacao percentage on the label. Something about San Francisco inspires a special type of American chocolate maker — and there’s no shortage of fine purveyors of other types of candy around the city as well.

Dessert6 Must-Visit Destinations for Chocolate Lovers
Tagged
Dessert United States
What did you think of this story?
Meh
Good
Awesome