If COVID-19 stole your summer dream of dancing to Chromatica in a beachside cabana, welcome to the club. Now, as summertime haunts like Fire Island and Provincetown plunge into winter, what’s a queer beach bum to do? The answer is easy: Start planning your cold-weather escape route with our warm winter vacation ideas. We all could use a little leisure trip after surviving this dumpster fire of a period.

While the options for traveling Americans won’t be as plentiful as usual this winter, there’s still a surplus of warm-weather destinations where you can live out those deferred summer fantasies. Each of these LGBTQ-friendly, snow-free retreats is either within the United States or currently welcomes American visitors. From Pacific Coast jungles to sandy Atlantic shores, a trip to one of these hot spots is sure to give you the summer vacation you deserve — even if the trip is a few months behind schedule.

Remember: The health crisis is on-going and continues to shape international travel. Be sure to stay up-to-date with advisories from the CDC, plan your trip accordingly, and mask up. 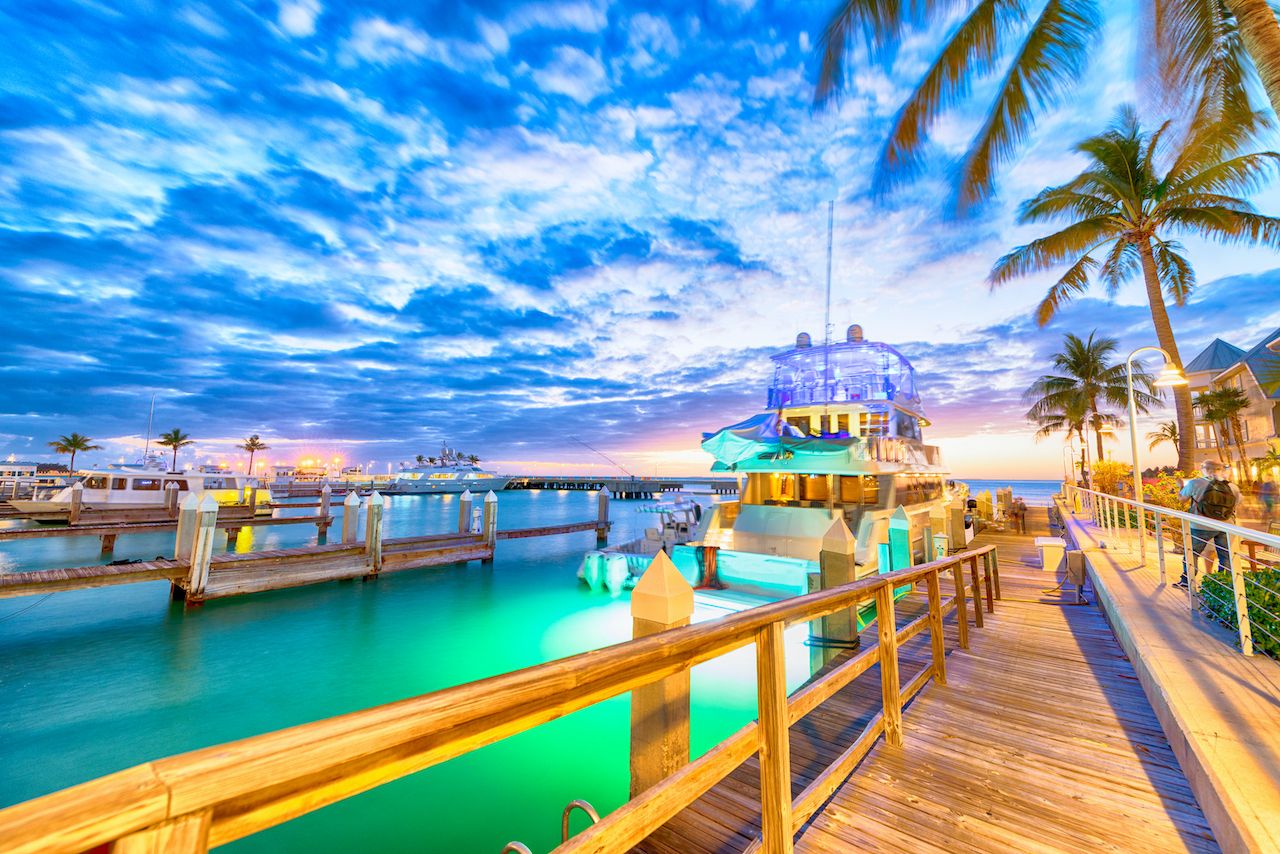 The southernmost point in the contiguous 48 United States has a long history of being a haven for LGBTQ Americans. Gay playwright Tennessee Williams called the island home from the 1940s until his death nearly four decades later. In 1983, the city became one of the nation’s first to elect an openly gay mayor, Richard A. Heyman. When HIV-positive advocate and artist JT Thomas began distributing stickers saying “One Human Family” to local businesses in 2000, it only took the city several months to adopt the motto as its official philosophy.

Today, Key West continues its tradition as a queer mecca with a vibrant nightlife scene (located on Duval Street between Angela and Petronia Streets) and a healthy helping of queer resorts. Island House is a cruisy gay haunt, Southernmost Inn is lesbian-owned, and Alexander’s Guesthouse is an all-adults-are-welcome hotel in a renovated mansion from the 1800s.

Being queer isn’t a pre-requisite for enjoying Key West, mind you. This Caribbean-style town is ideal for anyone into drinking rum, exploring coral reefs, biking around pastel houses from the colonial era, or enjoying an epic sunset. It’s the closest an American can get to paradise from the comfort of their car. 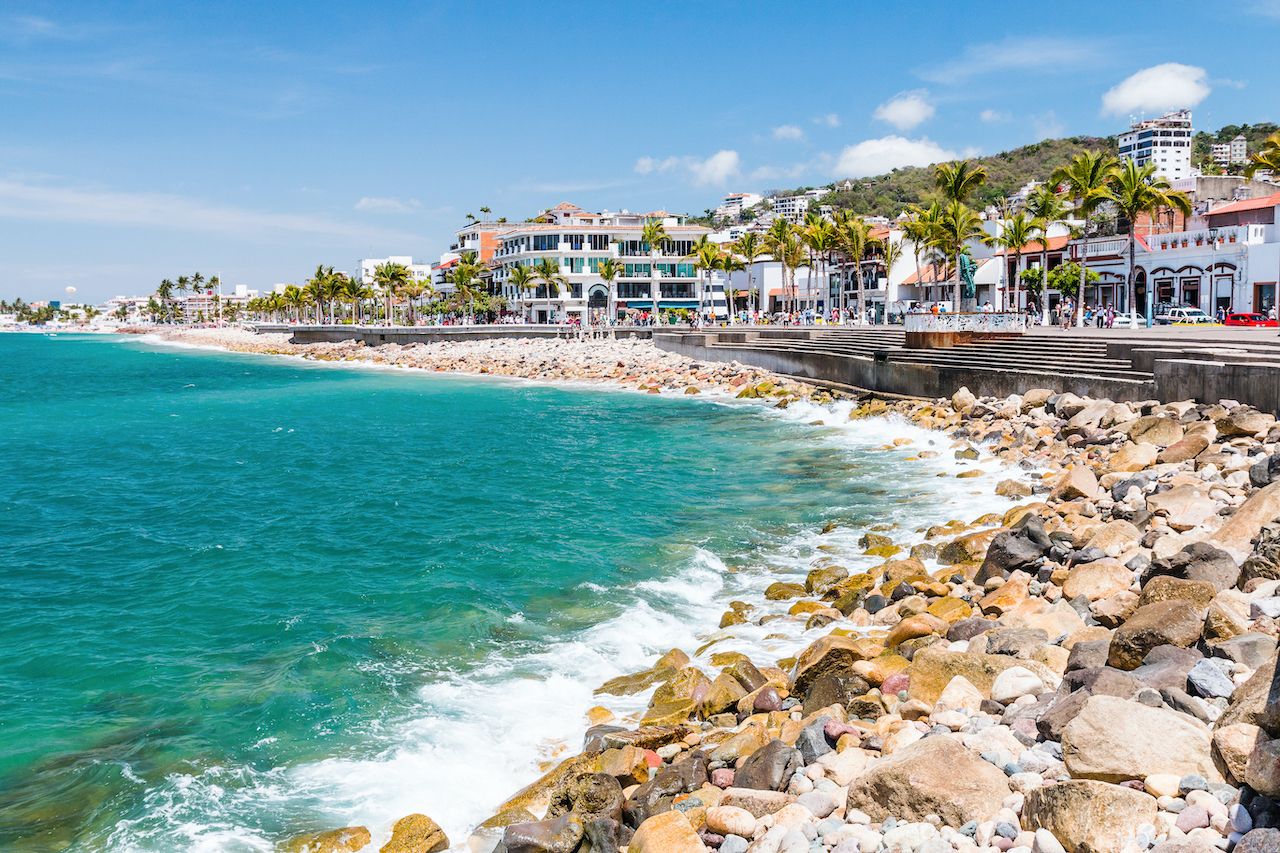 Every winter, cold weather in the United States spurs a gay migration to Puerto Vallarta — the Mexican land of perpetual sun and speedos. Known as the country’s queer capital, finding an LGBTQ-centric bar or business is easy while walking the cobblestone streets of Zona Romantica (Old Town). There’s practically a new set of gay clubs, quirky boutiques, and trendy cafes waiting around every corner.

But this season, the focus shouldn’t be on spending time indoors. Sandwiched between the glittering Bay of Banderas and the verdant Sierra Madres, Puerto Vallarta boasts a treasure trove of outdoor activities that delight in the area’s balmy weather. For Vitamin-D addicts, head to the southern end of Playa de los Muertos. Here, you’ll find gay sunbathers along a strip of sand known for the iconic “Blue Chairs” put out by an LGBTQ hotel with the same name. If you’re looking for something swanky, check out Mantamar Beach Club and sip cocktails in the seaside infinity pools. The hike from Boca de Tomatlan to Playa de Las Animas offers a more secluded coastal experience and passes by a series of hidden coves that are ideal for snorkeling. If none of that suits you, there’s nothing wrong with downing dirt-cheap margaritas from your hotel bar. Tequila comes from its eponymous hometown nearby, so on top of drowning your 2020 sorrows, you’re supporting the local economy. Win, win! 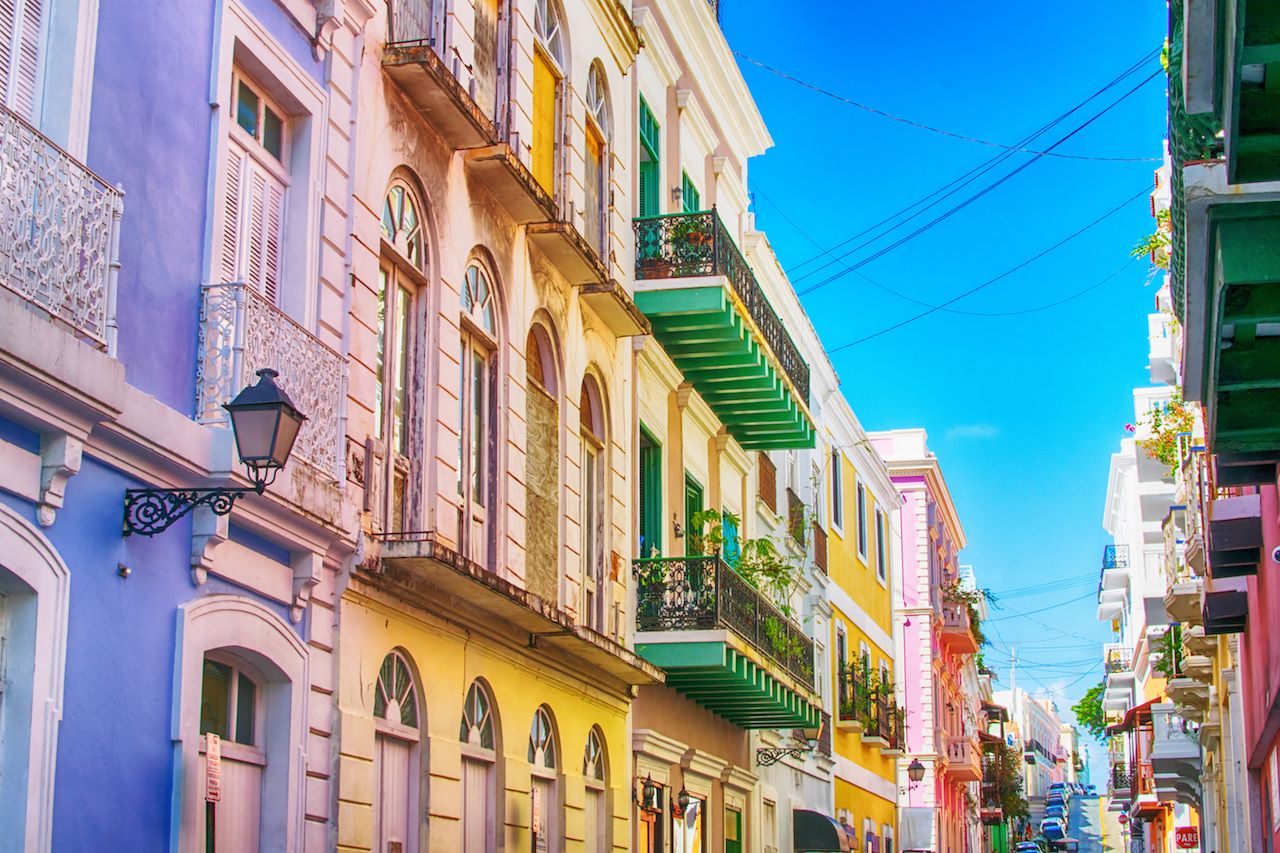 Puerto Rico is king when it comes to queer life in the Caribbean, and San Juan is the crowning jewel. Cabo Rojo and nearby Vieques also sport significant LGBTQ populations, but neither has the diversity of offerings as the island’s capital city.

The majority of San Juan’s gay bars are split between the hipster haven of Santurce and the glitzy streets of Condado. You can sip brews next to the beach at Oasis, dance till dawn at Circo, check out the go-go boys at SX, or challenge the locals to a game of pool at Tía María Liquor Store. For lodging, rest your head at Coqui del Mar — a gay owned-and-operated hotel close to Ocean Park Playa, the gay beach frequented by locals. If you want to meet LGBTQ tourists, Atlantic Beach (located in front of the Atlantic Beach Hotel in Condado) is the place to see and be seen.

San Juan is about more than downing mojitos and cruising by the beach, however. With an old town predating the Mayflower’s arrival in Massachusetts, street art and culinary scenes that rival Brooklyn, and access to outdoor excursions in the jungles of El Yunque National Forest, seeing Puerto Rico’s capital city should be a bucket-list priority for any American traveler. The island feels worlds away from mainland America, and you don’t even need a passport to get there. 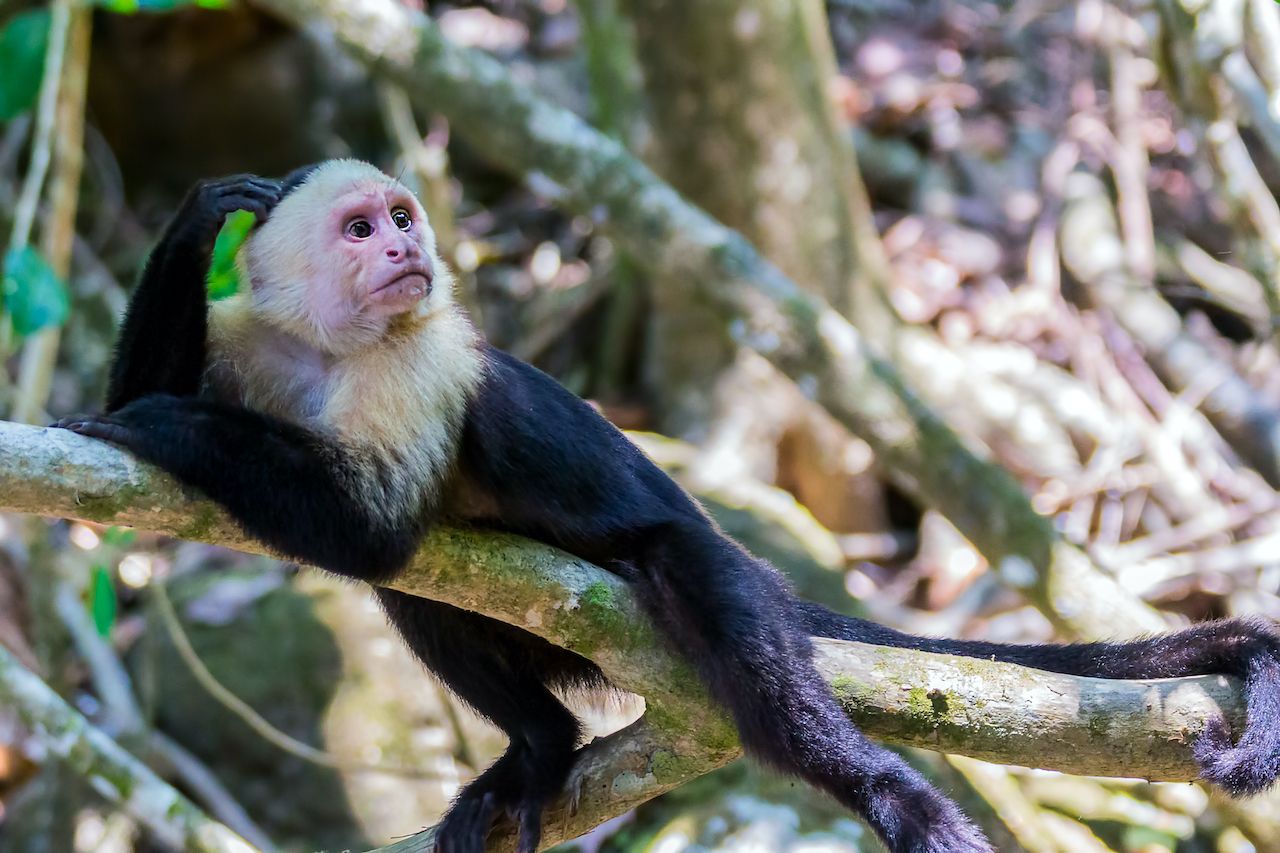 Costa Rica, which finally legalized same-sex marriage this past May, is the most LGBTQ-friendly nation in Central America. While the capital city of San Juan is the epicenter of queer life, it’s the idyllic tourist town of Manuel Antonio that makes a winter trip worthwhile.

Located on a beach-framed strip of rainforest jutting into the Pacific Ocean, Manuel Antonio is most famous for its 1700-acre national park and 136,000 acres of protected marine territory. Colorful birds and curious monkeys play in the trees, whales and dolphins crest in the sea, and the perennially green jungles end only where white-sand beaches begin.

Hotel Villa Roca, famous for its clothing-optional infinity pool, is the area’s gay owned-and-operated luxury lodging. For a gay beach day, check out La Playita (only accessible at low tide) or Playa La Macha (a secluded nude beach). There’s little to no queer nightlife in Manuel Antonio, but with an abundance of daytime excursions like hiking, diving, white-water rafting, and surfing from which to choose, there’s little chance you’ll be able to stay up long after the sun goes down anyhow. 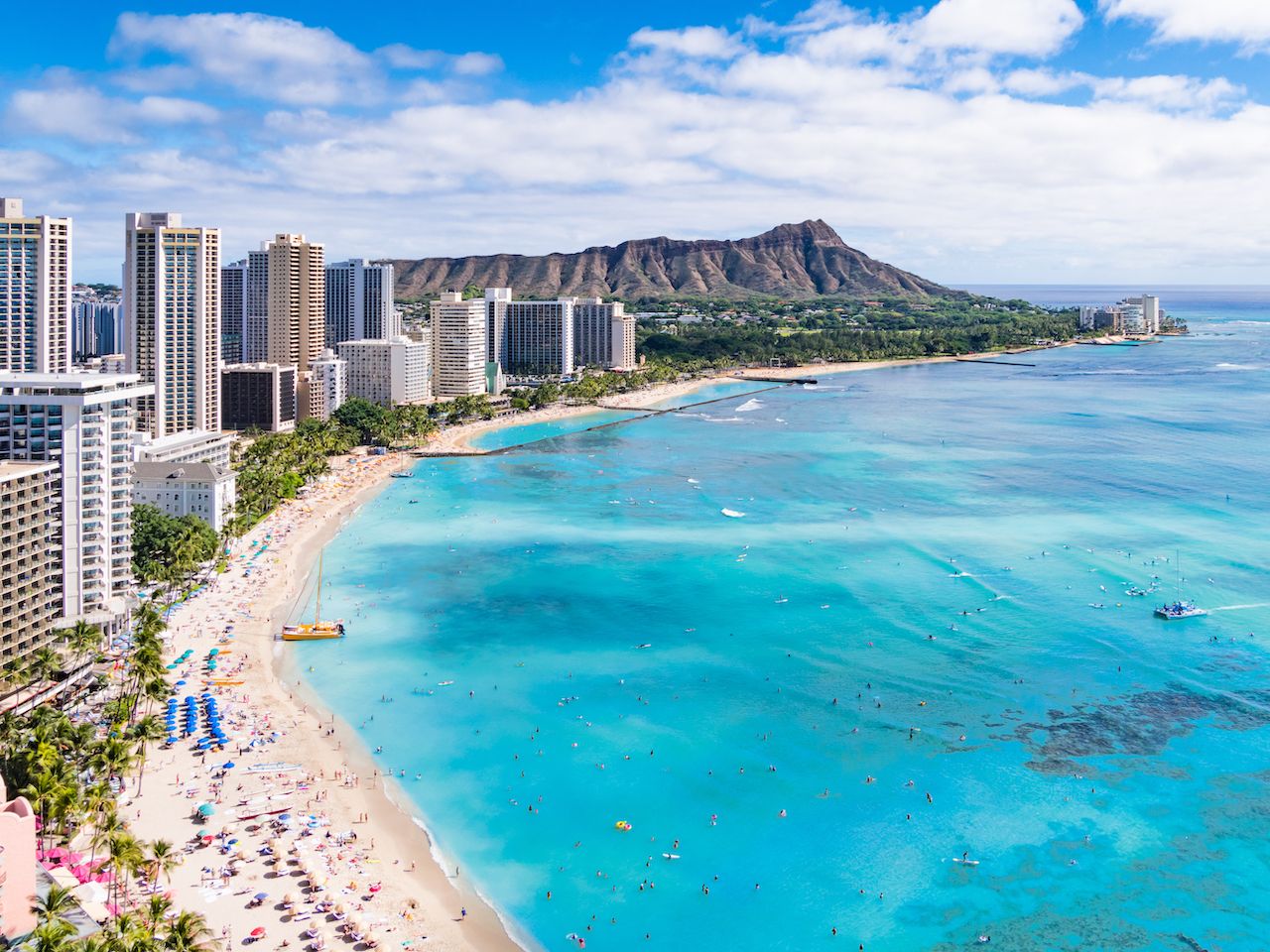 Hawaii is a no-brainer for landlocked Americans looking to trade in their snow boots for swimsuits. Whether you want to dive among the kaleidoscopic array of coral-dwelling fish, hike through volcanic rainforests, or lounge in the sun like a lazy sea turtle, any of the eight major islands will deliver the goods.

If you’re looking for an LGBTQ aloha, head to the Waikiki section of Honolulu. Here you’ll find a handful of queer bars (check our Bacchus Waikiki or Hulas) within walking distance to the well-known gay beaches: Queen’s Surf and Diamond Head.

Located on Oahu — Hawaii’s most populous island — Waikiki tends to get packed with tourists, but a scenic drive northwest is all you need to beat the crowds. Once you reach the opposite end of the island, emerald forests crash into rugged beaches like Waimea and Turtle Bay, where monk seals and surfers outnumber city slickers from the south side.

Note, Hawaii’s restrictions for mainland Americans are frequently changing and vary from island to island. 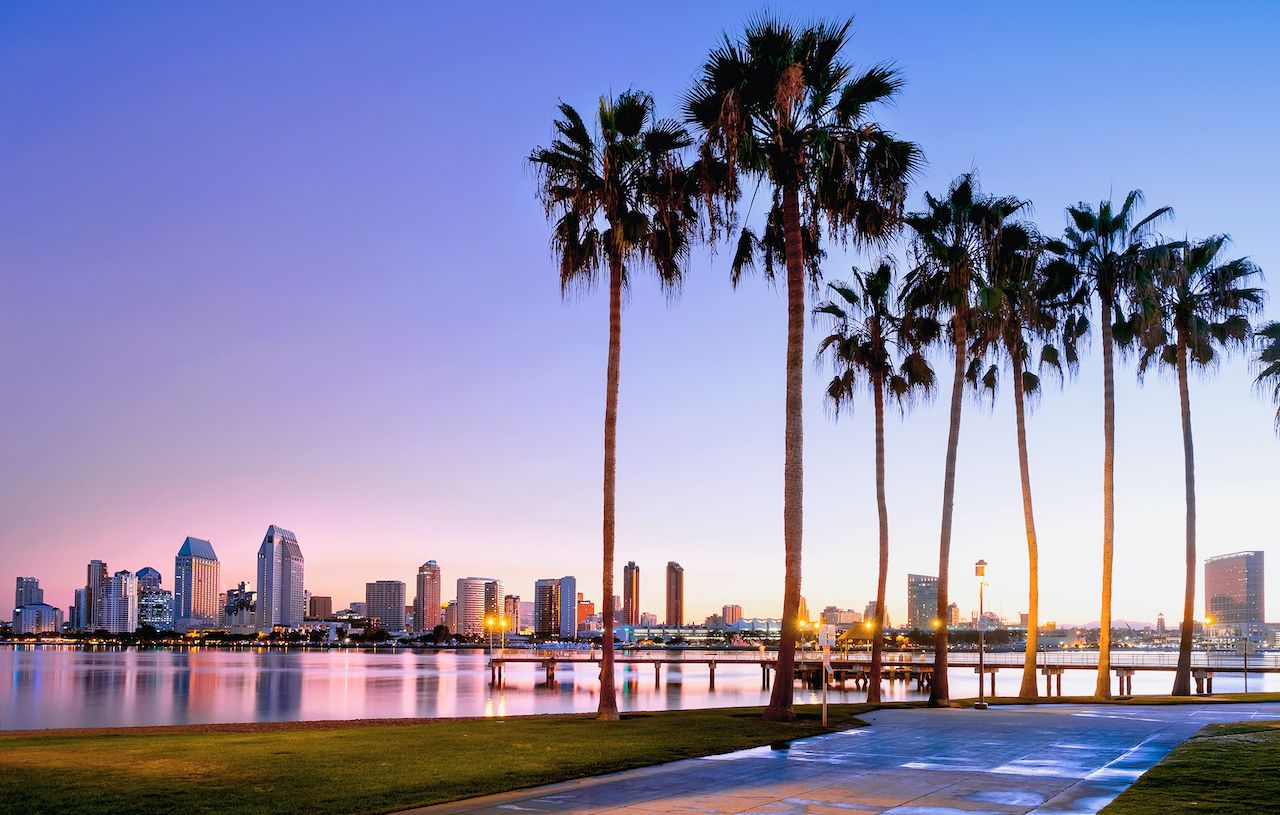 California’s most southern metropolis exudes the calm confidence of a suntanned surfer bro. With effortlessly hip ‘hoods stretching from Barrio Logan to University Heights, roughly 30 beaches and 40,000 acres of parks to explore, and weather so perfect it seems simulated, we’re wondering when the rest of America will buy a surfboard and move to San Diego themselves.

Naturally, the LGBTQ community knew how fabulous San Diego was decades ago, claiming the neighborhood of Hillcrest as their home base for over 50 years. Wedged among the area’s boutique shops and restaurants, you’ll find a plethora of gay establishments, including Gossip Grill (for the womxn), The Rail (the city’s oldest boy bar), Urban Mo’s (best for brunch), and Hillcrest Brewing (the world’s first gay brewing company). More recently, the queer scene has started spilling into North Park, University Heights, and beyond — a sign of the city’s inclusive atmosphere.

The Pacific water is decidedly less inviting during winter than in summer, but with temperatures in the mid-60s and sunshine that doesn’t quit, a beach day is still worthwhile. For those who fear a farmer’s tan, head to Black’s Beach. This sandy expanse below the steep bluffs of Torrey Pines is an iconic clothing-optional spot for sunbathers and surf fiends. There’s usually a sizable crowd of gays hanging out in the buff. If the fellow sun-worshippers don’t take your breath away, the Californian landscape certainly will. 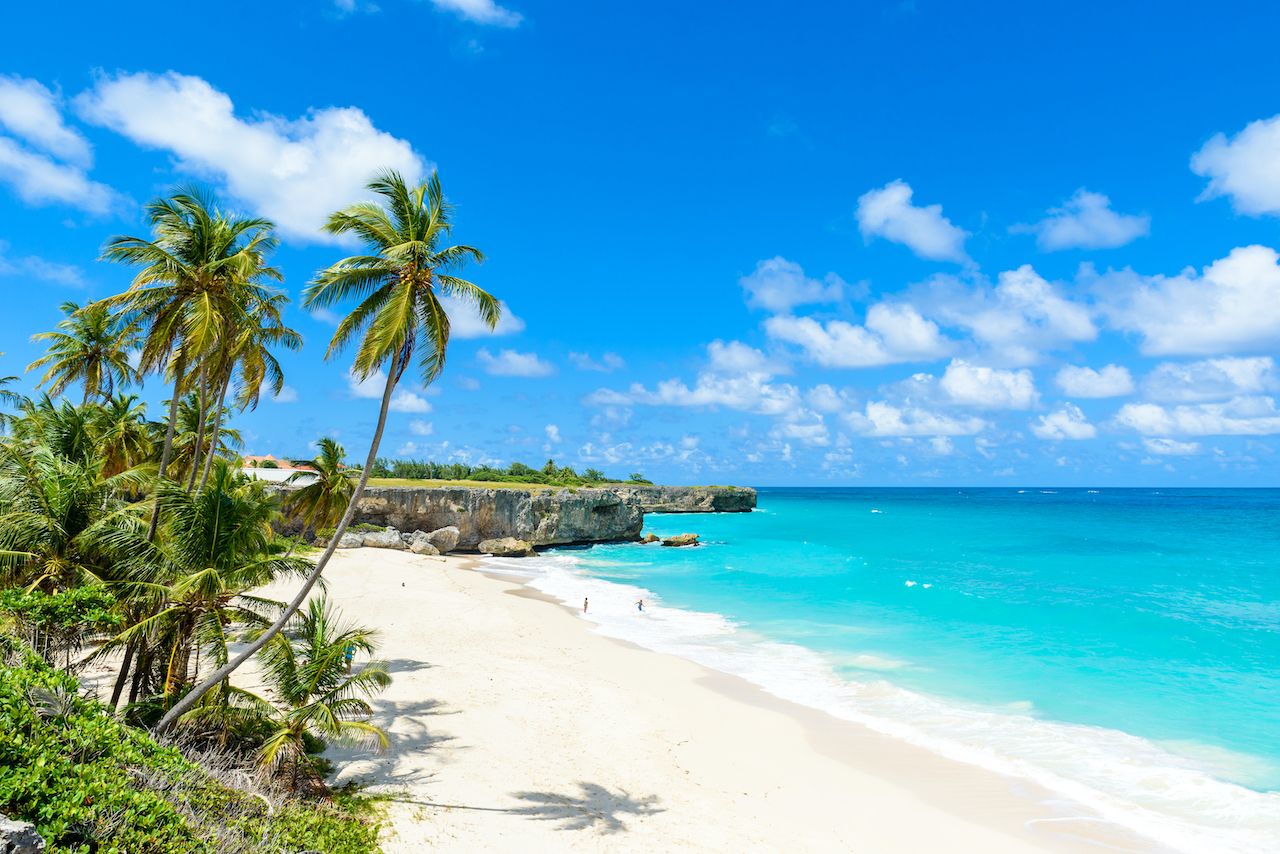 If you’re fighting a severe case of work-from-home cabin fever, the turquoise waters of Barbados might offer the best cure. In July, the Caribbean island introduced the Barbados Welcome Stamp program — a 12-month visa for remote workers worldwide.

Although an early version of the application defined marriage as “the relationship that subsists between a man and a woman,” Prime Minister Mia Mottley quickly quelled the queer community’s righteous kerfuffle by changing the language and ensuring LGBTQ couples won’t face discrimination. “I want to say that as long as I am prime minister of this nation, we welcome all,” she stated this past summer.

While Barbados needs to update its laws on homosexuality (same-sex sexual activities is illegal in the country, though it’s unclear if the colonial-era law is enforced), Mottley’s words prove that the tiny island nation is on a progressive path forward.

You won’t find a ton of LGBTQ-specific offerings in Barbados, but let’s be honest — in the age of physical distancing, Zoom backgrounds have become the ultimate work-and-play spaces. This year is your chance to inspire FOMO on all future conference calls by forcing everyone you know to stare at the pearly shores of your new Caribbean home.

OutdoorThe Top 10 Destinations in the US for LGBTQ Travelers This Fall
Tagged
Beaches and Islands LGBTQ Travel United States
What did you think of this story?
Meh
Good
Awesome