Have you ever gone on an outdoor adventure with the hopes of finding fantastic beasts, only to see fellow tourists around every turn instead? For wildlife lovers, this is an all-too-common occurrence. Searching for animals in their natural habitats can be frustrating and, in popular tourist destinations, fruitless. The alternative is visiting a zoo, but these inorganic experiences can feel at best gimmicky, sanitized, and impersonal — and, at worst, unethical.

Luckily, the United States is chockablock with family-friendly locales that bridge this gap between authenticity and ease. These eight destinations offer opportunities to meet some of North America’s indigenous animals — and a few furry foreigners — in safe, natural settings. 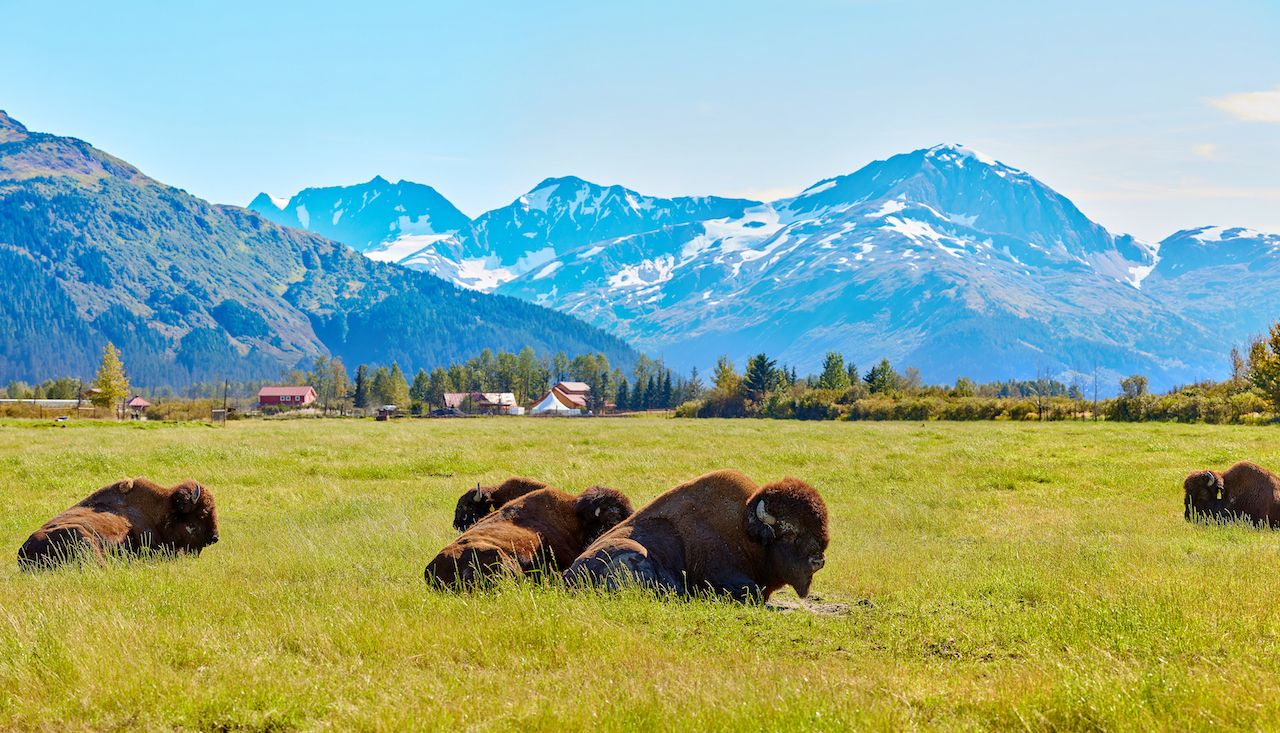 Dedicated to caring for the 49th state’s mammoth-sized animal population, the Alaska Wildlife Conservation Center provides a space to meet beasts you might be reluctant to find in the wild. Some of the 16 native species you’ll find here include moose, wolves, bison, a bevy of bears, and a docile porcupine named Snickers. This nonprofit supports orphaned and injured animals, most of which can’t be released back into the wild because of their reliance on humans.

Located on over 200 acres in the verdant valley of Girdwood, about an hour south of Anchorage, the AWCC allows each animal to roam freely in spaces far less cramped than what they’d find at a corporate zoo. It has a pretty sweet backyard landscape, too. The grounds provide panoramic views of the Chugach Mountains rising from thick willow tree forests, making this an equally appealing stop for those looking to take in the Alaskan countryside. 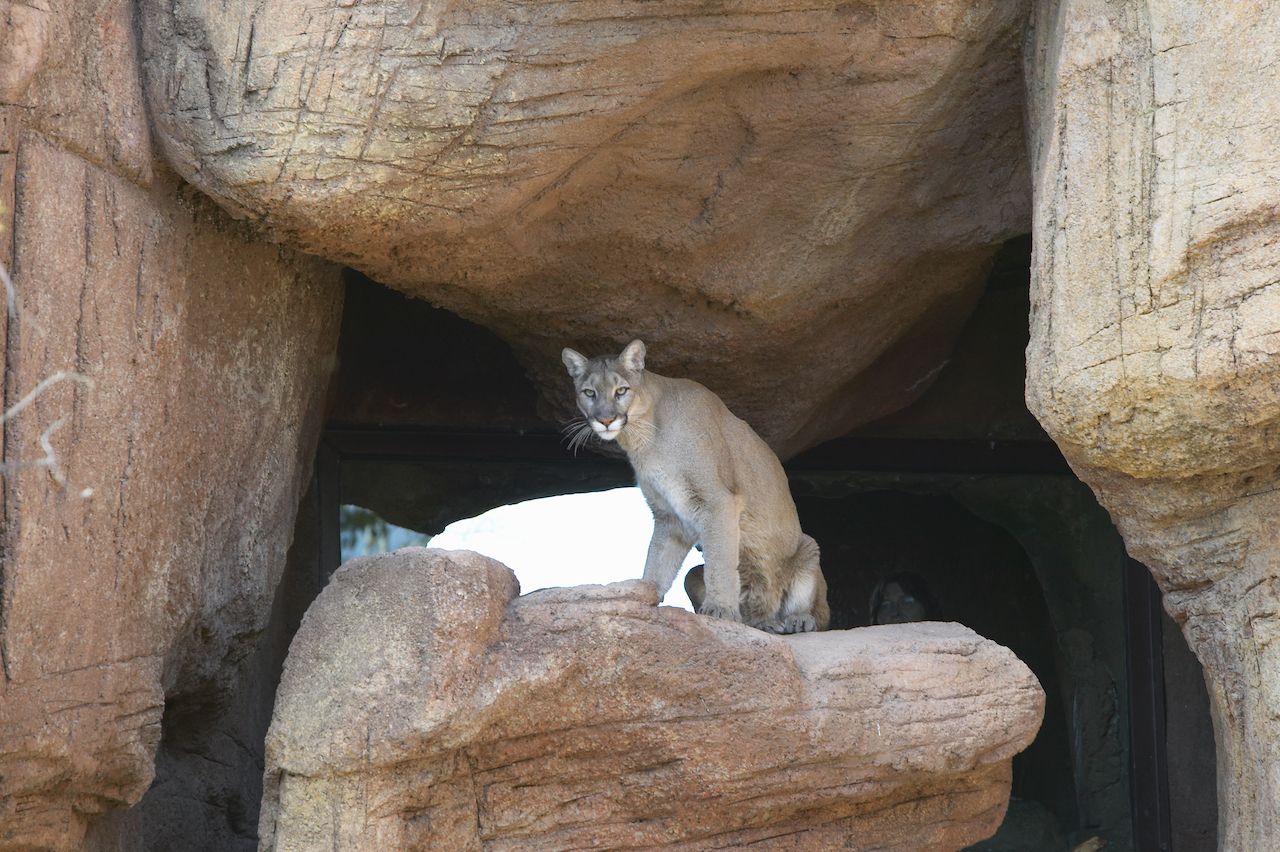 The flora and fauna of Arizona’s Sonoran Desert appear like science fiction creatures to the foreign eye, and the Arizona-Sonora Desert Museum is the best place to see the fascinating wildlife up close. Situated just outside Saguaro National Park on 98 acres of land, the museum features over 1,200 plants and 230 mammals, reptiles, amphibians, insects, and birds that are native to the region.

The Desert Loop Trail, a two-mile outdoor hike through gardens and animal sanctuaries, is the museum’s top attraction. Winding through the cacti-laden red-rock landscape, visitors can see animals like coatimundi, free-flying falcons, and coyotes in their natural habitats. It’s a Southwest safari, only you don’t have to worry about stepping on a rattlesnake. They’re safely stowed away for your pleasurable viewing, too. 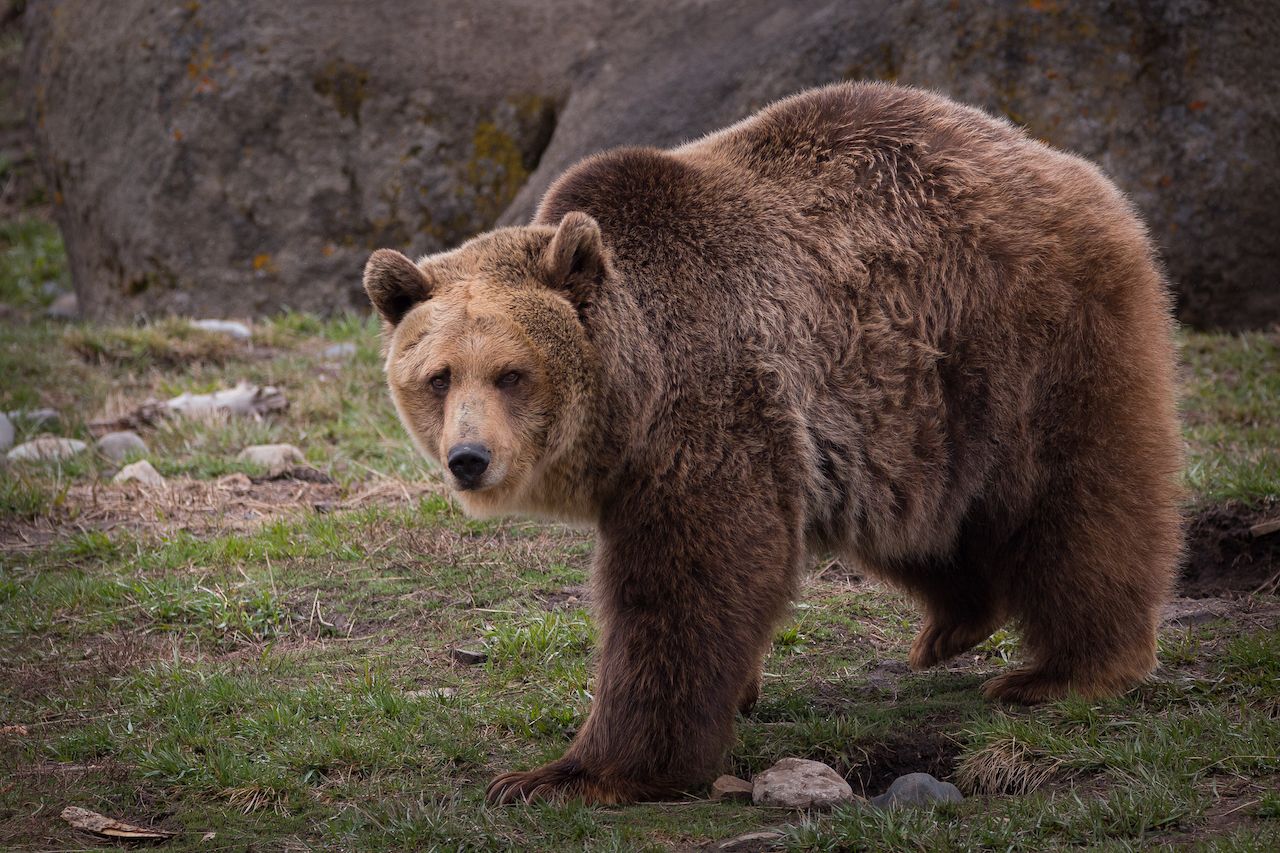 This Montana-based grizzly center is a sanctuary for bears born in unsafe captive environments. The bears, which will never be reintegrated into the wild because of their connection to humans, are afforded a loving home here in the heart of Big Sky Country.

You won’t find any cages at this rescue center, which focuses on educating visitors about protecting these giant beasts. Expert staff members give a bear safety tutorial before taking tourists to meet the four hairy mammals currently living at MGE. The tour is a useful introduction for people coming into contact with America’s bear population for the first time. 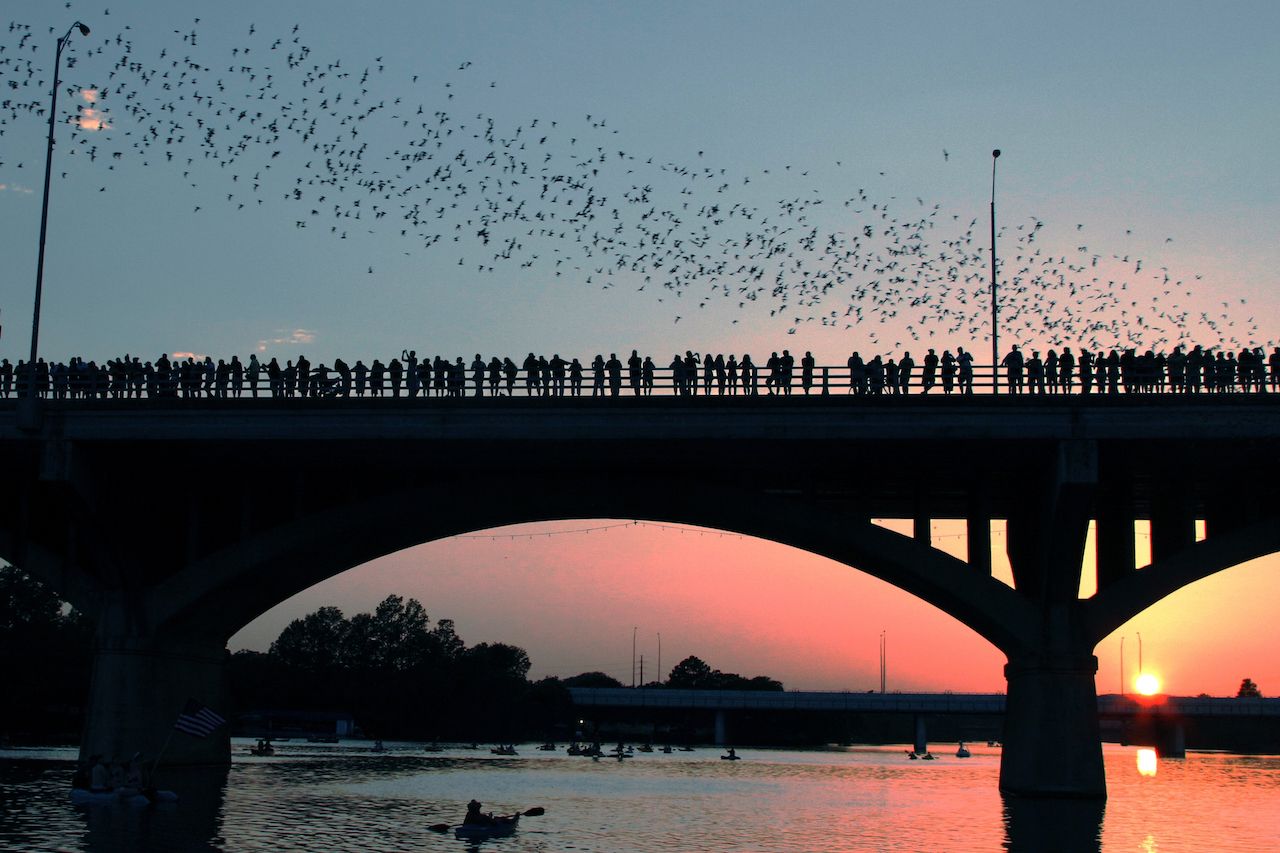 The Congress Avenue Bridge in Austin, Texas, is home to approximately 1.5 million bats — the largest urban bat colony in the world. Most of the bats, which live in one-inch-wide holes on the underside of the bridge, are pregnant females making an annual migration from Mexico. They spend their nights hunting insects to help feed themselves and their newborns, providing the city with a 100-percent organic, Mother Nature-approved pesticide.

You can see the colony fly from its man-made bat cave and into the air for about 30 minutes every sundown from March to November. It may be a bit alarming at first — a chiroptophobic’s nightmare, no doubt — but watching the bats emerge as they begin their nightly feast of flies is a natural wonder worth watching. Clouds of bats blotting out a city skyline is an image otherwise reserved for fantastical superhero films, but here, it’s woven into the fabric of Austin’s “weird” identity.

Go early to grab a spot on the bridge, or along the Colorado River winding below, for a totally free vantage point of the little critters swarming the sky. 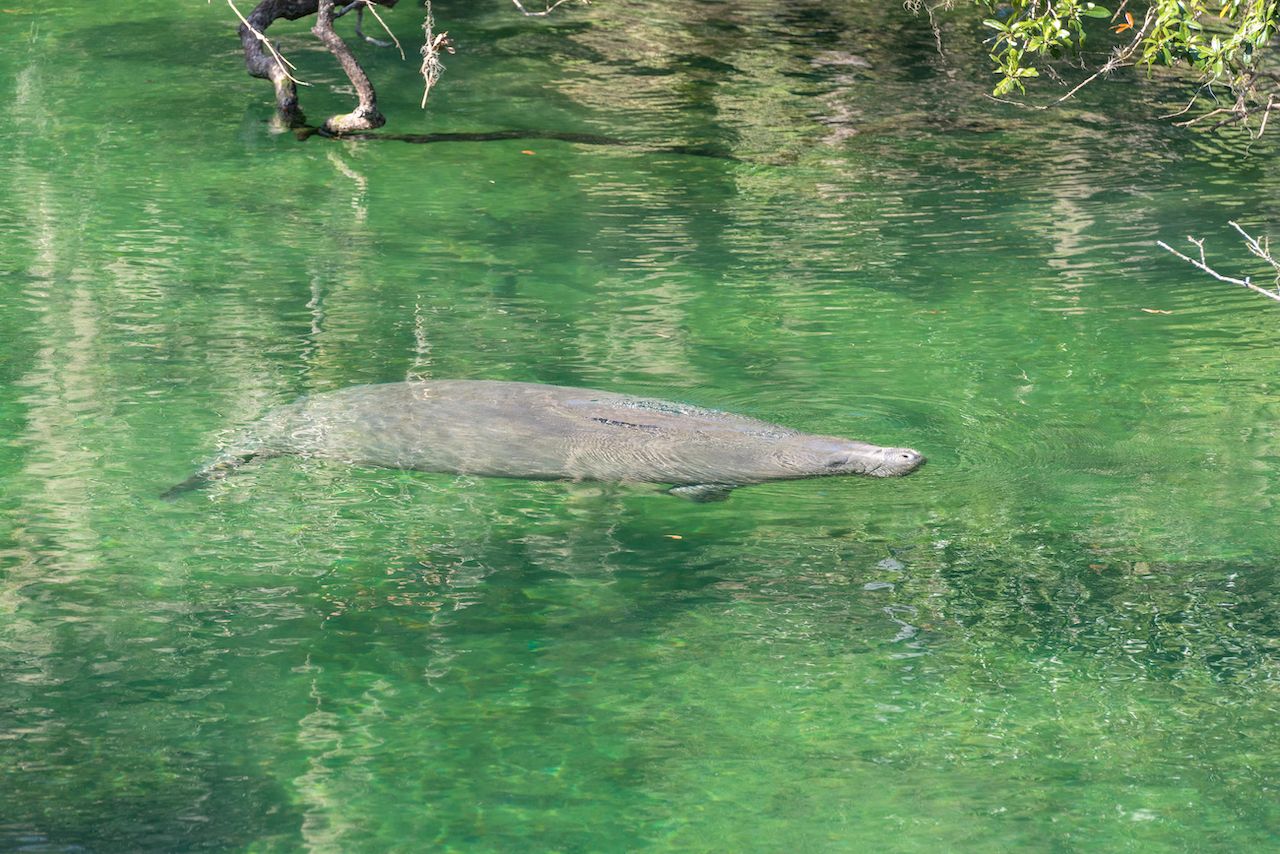 The naturally heated swimming hole in Blue Spring State Park, located in central Florida, becomes a wintertime refuge for manatees between November and March. Up to 500 of these sirenian swimmers were counted lounging around the 73-degree Fahrenheit water last season. Manatees come here in search of the warm temperatures, but visitors benefit from the clear waters that make it easy to see the animals enjoying their seasonal escape. Travelers interested in watching the annual gathering can observe safely from a stretch of boardwalk that abuts St. Johns River. 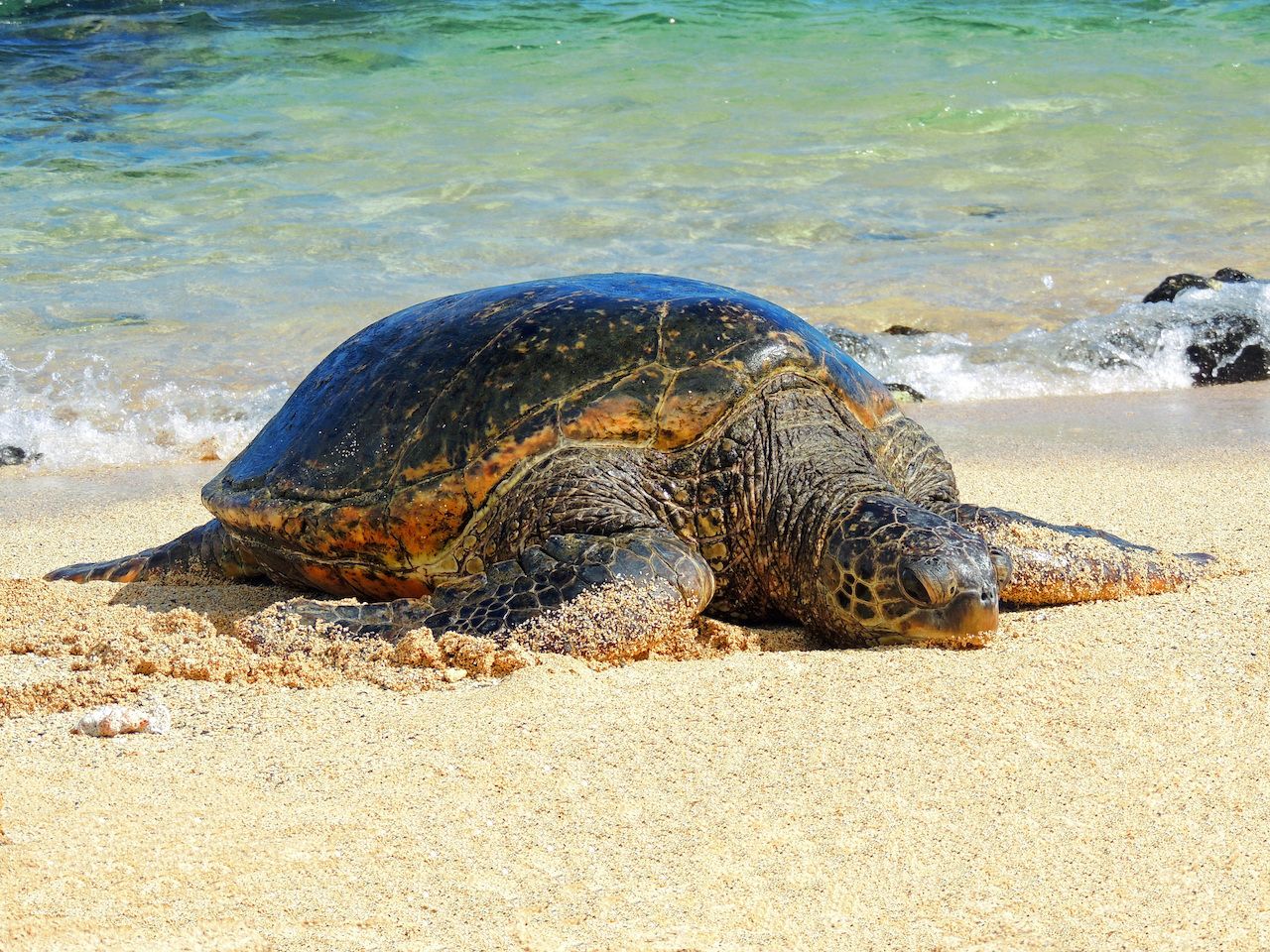 An eclectic crew of colorful fish can be found darting around the coral of this reef-protected snorkel destination along Kauai‘s northern coast. You only need some snorkel gear to see the all-access aquarium for yourself. The rest is totally free. Fish, however, are the least exciting piscine creatures people will see swimming at this beach. Sea turtles are often spotted along the shallow ocean floor, and endangered Hawaiian monk seals regularly make an appearance onshore.

For those who don’t feel like getting in the water, you’re still bound to see plenty of wildlife aside from monk seals. The beautifully colorful untamed chickens and noisy roosters of Hawaii, which are a curious genetic breed of their own, can be found almost everywhere on the island. The proliferation of these cocks occurred as a result of Hurricane Iniki in 1992. Chicken coops all over the island were destroyed, and many hens and roosters were released into the countryside. The birds got busy doing it as they do on the Discovery Channel, and pretty soon Kauai became their very own Garden of Eden. 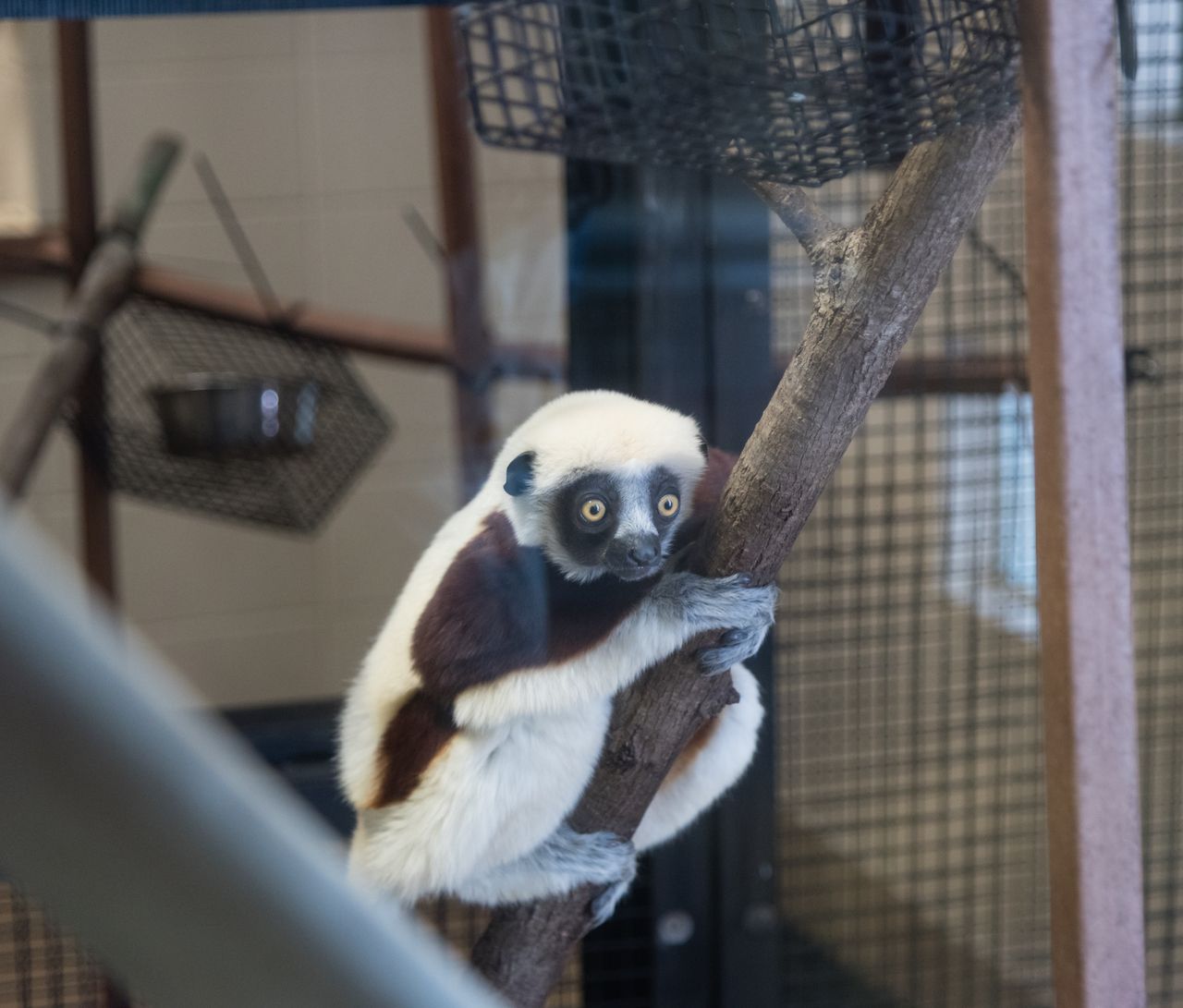 The Duke Lemur Center (DLC) is America’s premier institute for studying Madagascar’s myriad simian populations and home to the largest collection of these endangered mammals outside their natural habitat.

Of the 15 types of lemurs and lorises on site, the most recognizable are the Coquerel’s sifakas and ring-tailed lemurs. Sifakas, made famous for starring on the PBS kids show Zoboomofoo, which was partially filmed at the DLC, are known for their cream-and-auburn coats. They’re often referred to as “dancing lemurs” because of the balletic way they hop across the ground and propel themselves through the air at distances greater than 20 feet. Ring-tailed lemurs, distinguished by their bushy black and gray tails, are the most widely studied lemurs and are commonly used as the symbol of Madagascar.

Both these species live in protected forests under the care of Duke’s research center and can be visited on public and private tours. These guided opportunities are led by knowledgeable staff members who exude passion for the conservation work done at the center. Plan well in advance, as it’s nearly impossible to book a same-day excursion. 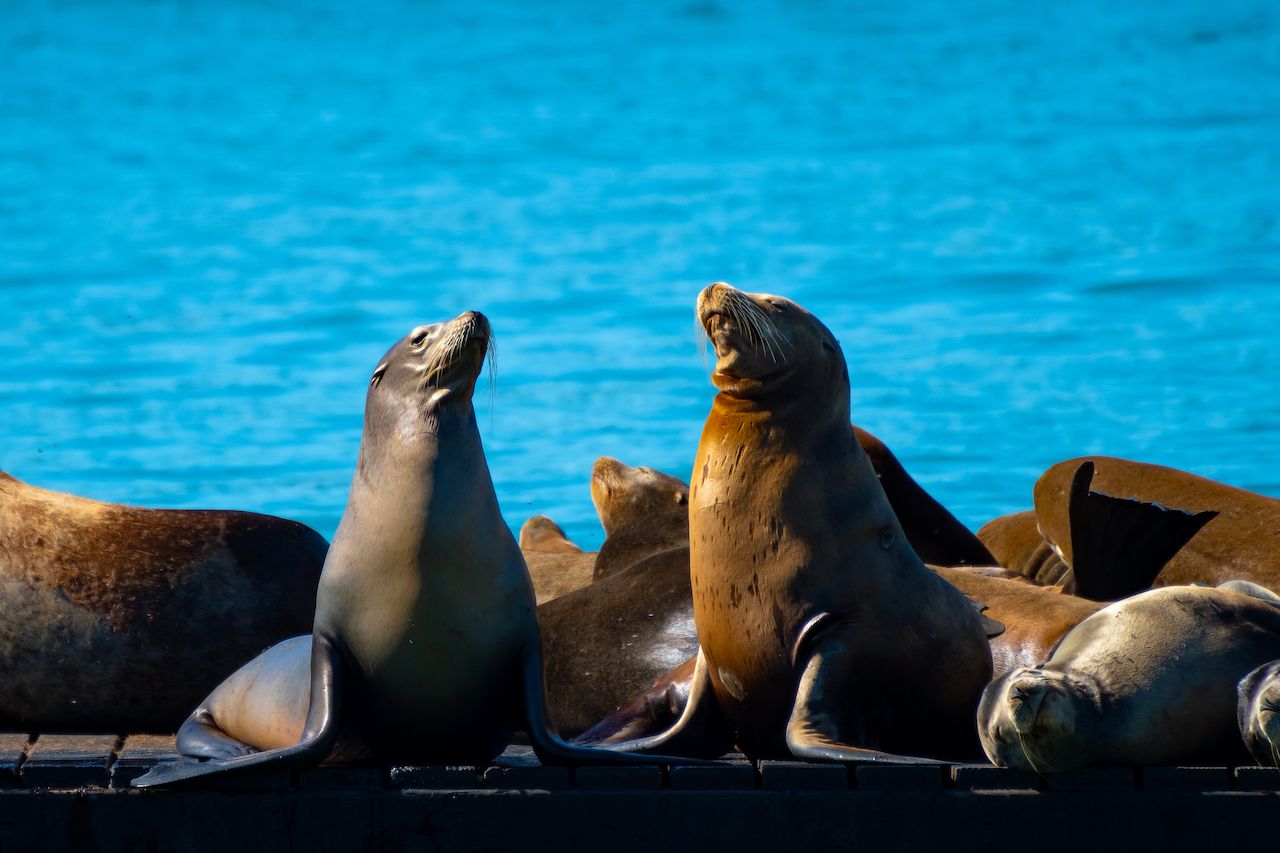 You can smell this attraction long before you see it — and not in a good way — but this free, touristy hotspot at Fisherman’s Wharf in San Francisco is still famous for a reason. There’s no other major city where you can catch up to 1,700 sea lions swimming, squawking, and sunbathing all in one secluded place. Watching the animals fight for a spot at the pier is like a clown-car comedy. They’re packed on the docks tighter than sardines as they play and bark in full view. The sea lions are wild, so their numbers wax and wane with the season, but you can be sure there will always be a few hanging out no matter the time of year.

These pinnipeds weren’t always a fixture in San Francisco. When an earthquake hit the Bay Area in 1989, sea lions started arriving in droves, much to the chagrin of their maritime neighbors. After discussing what to do, the Marine Mammal Center‘s recommendation to protect the animals won out. California sea lions have been happily calling K Dock at Pier 39 their home ever since.