While tasting rooms in such well-known wine spots as Napa Valley seem to be packed every weekend of the year, across the continent vintners along the Eastern seaboard are quietly producing excellent wines that are garnering ever more attention.

Wineries from Canada to Virginia are producing standout whites, sparkling wines, and a few notable reds in picturesque rural locations. Add in nearby wonders like the Blue Ridge Mountains and Niagara Falls, and it’s time to start planning your outings. Here’s where to go to find the best wineries on the East Coast. 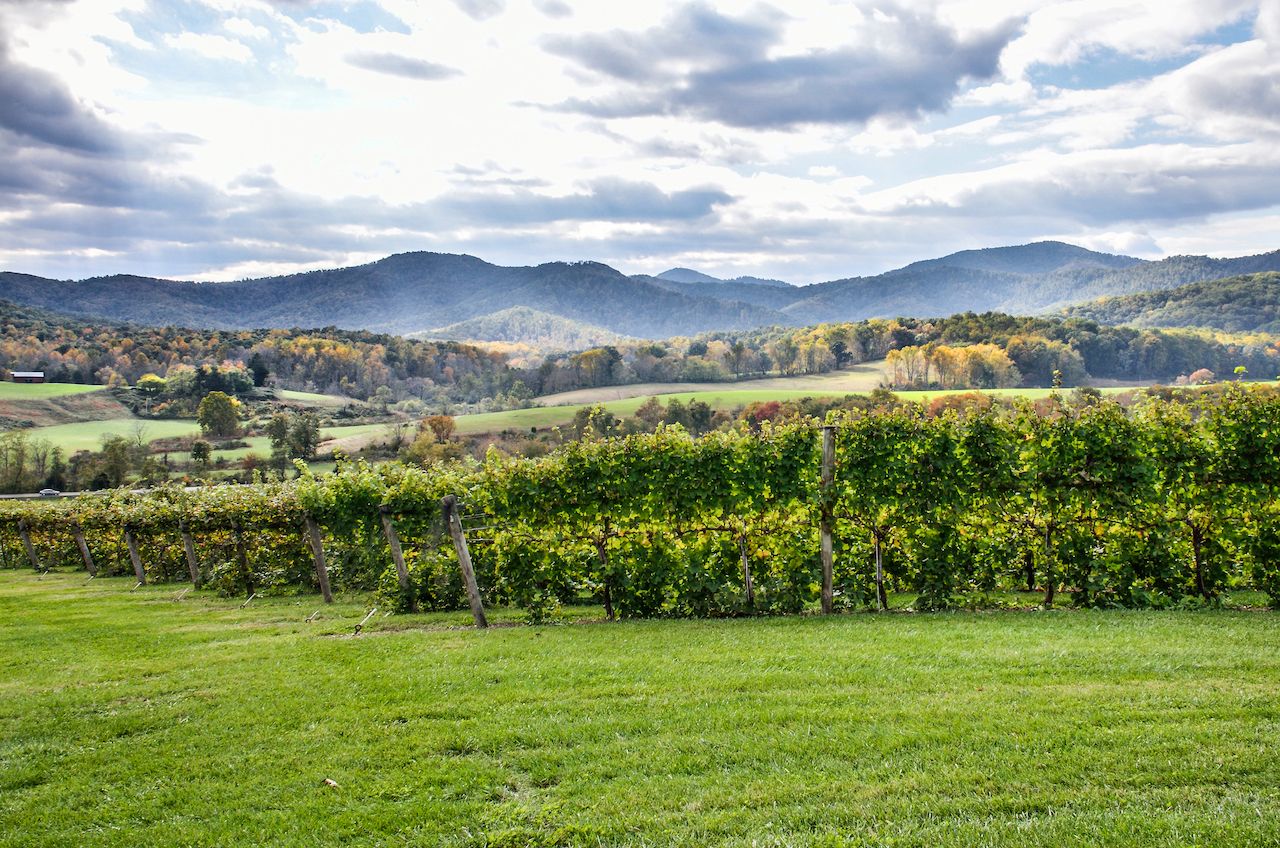 The Monticello Wine Trail is about more than the historic home of Thomas Jefferson. Granted, it was Jefferson who envisioned Central Virginia as an American wine region to rival Europe’s, and the vineyards around his estate have vines that date back to the 1700s. But you’d be remiss to not spend time cruising through the Blue Ridge Mountains, taking in the bright colors and blue skies on winding roads along the four wine loops that make up the appellation.

Though Virginia has made its name putting out high-quality whites literally for centuries, recently it’s begun to forge an identity by producing Viognier, a grape largely ignored by the rest of America. You’ll find a great one at the historic Jefferson Vineyards, but if you want to venture out a little from Charlottesville, Veritas Vineyards’ Viognier is also fantastic and conveniently located near the entrance to the Blue Ridge Parkway.

Charlottesville itself is one of the best college towns in America to spend a weekend, a place where colonial architecture and deep green lawns dominate the landscape. And if you’re tired of wine, the city is also known for its breweries, so you can sip something different at spots like Three Notch’d, South Street, and Hardywood Brewery. 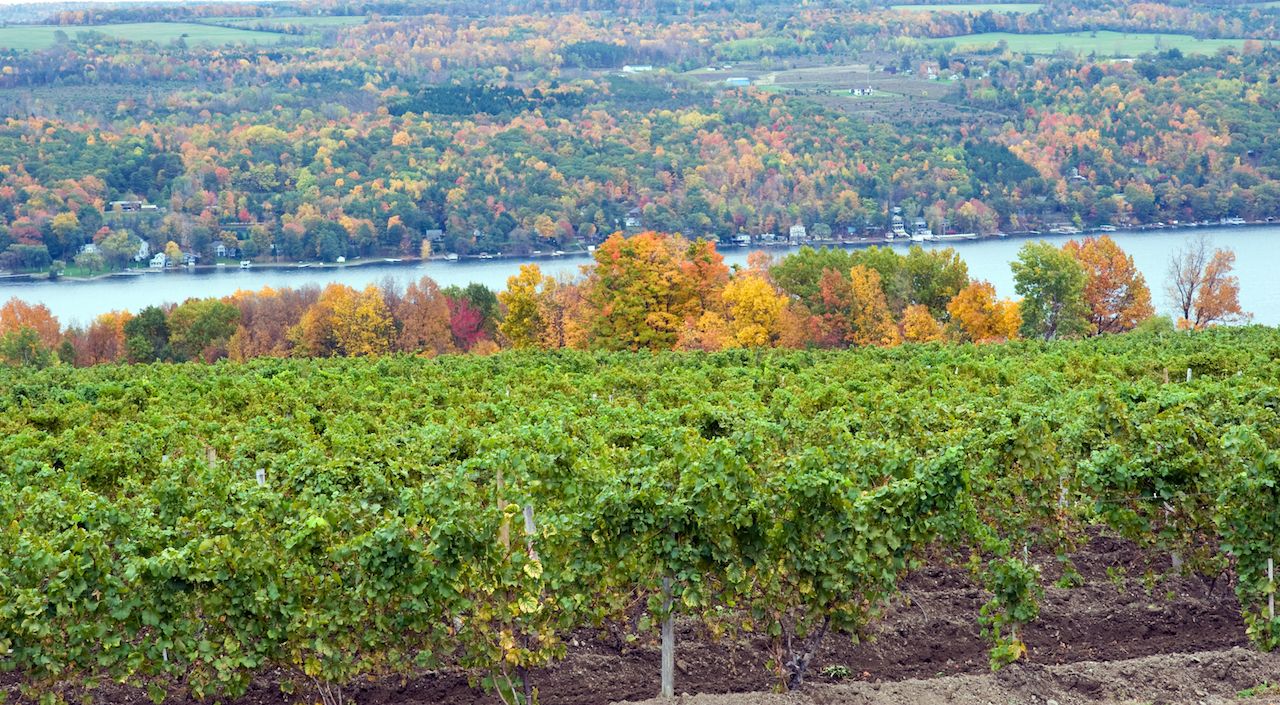 Any time between April and December is a fantastic time to visit the wine region that’s gaining a reputation as having the best wineries on the East Coast. If you had to choose a time of year to visit, though, we’d recommend the fall — when the rolling hills and deep gorges that surround the Finger Lakes are most vibrant, covered in bright reds, oranges, and yellow.

The three primary wine trails to follow here are each based around one of the lakes: Cayuga, which has 16 wineries; Keuka, with eight wineries; and Seneca, which has 36. Though we wouldn’t advise trying to hit all of them — or even a quarter of them — make sure you block off time to hit the Bloomer Creek and Shaw vineyards while you’re there. Rieslings and Gewurztraminers are the specialties of the region, but even if you’re not big on sweet wine, the setting makes the trip worthwhile.

Throughout the countryside, you’ll find romantic B&Bs and stately old homes for rent. Or if you’re feeling hearty, the region has plenty of lakeside camping and hilltop cabins. For those looking to stay somewhere with a few more amenities, the nearby town of Ithaca gives you a cozy, cool college-town vibe. 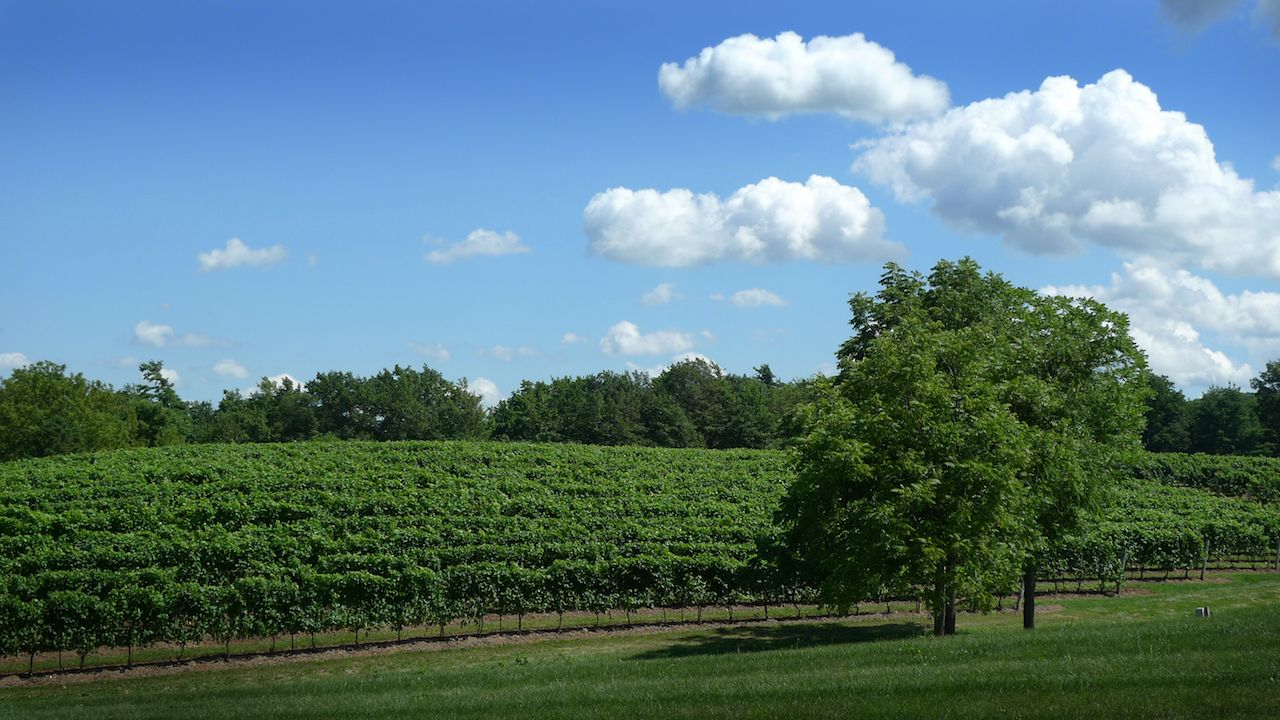 Once you’ve taken your requisite selfie next to Niagara Falls, head out towards Toronto to Niagara-on-the-Lake, where over 50 wineries dot the countryside. The trees along the banks of the Niagara River make for stunning photographs — whether dressed in fall colors or spring blossoms — and the drive through the old farmhouses and estates creates an equally scenic journey.

This region offers some of the more unique wine-tasting experiences in North America. Monastery Cellars, for example, lets you taste wine in a Gothic stone 1890s monastery, full of stained glass and epic statues. Lundy Manor, the region’s lone estate winery, will have you sipping inside a sprawling mansion set across acres of leafy vineyards. And the Peller Estates has its own igloo-like bar where you’ll taste ice wines in sub-freezing temperatures at a bar made of ice.

Niagara also has a beer trail if you’d like to try some of the other liquid offerings. Or get out on the river with whirlpool and jet-boat tours. With the favorable exchange rate, Niagara Falls might be the best value for a northeast wine tour. 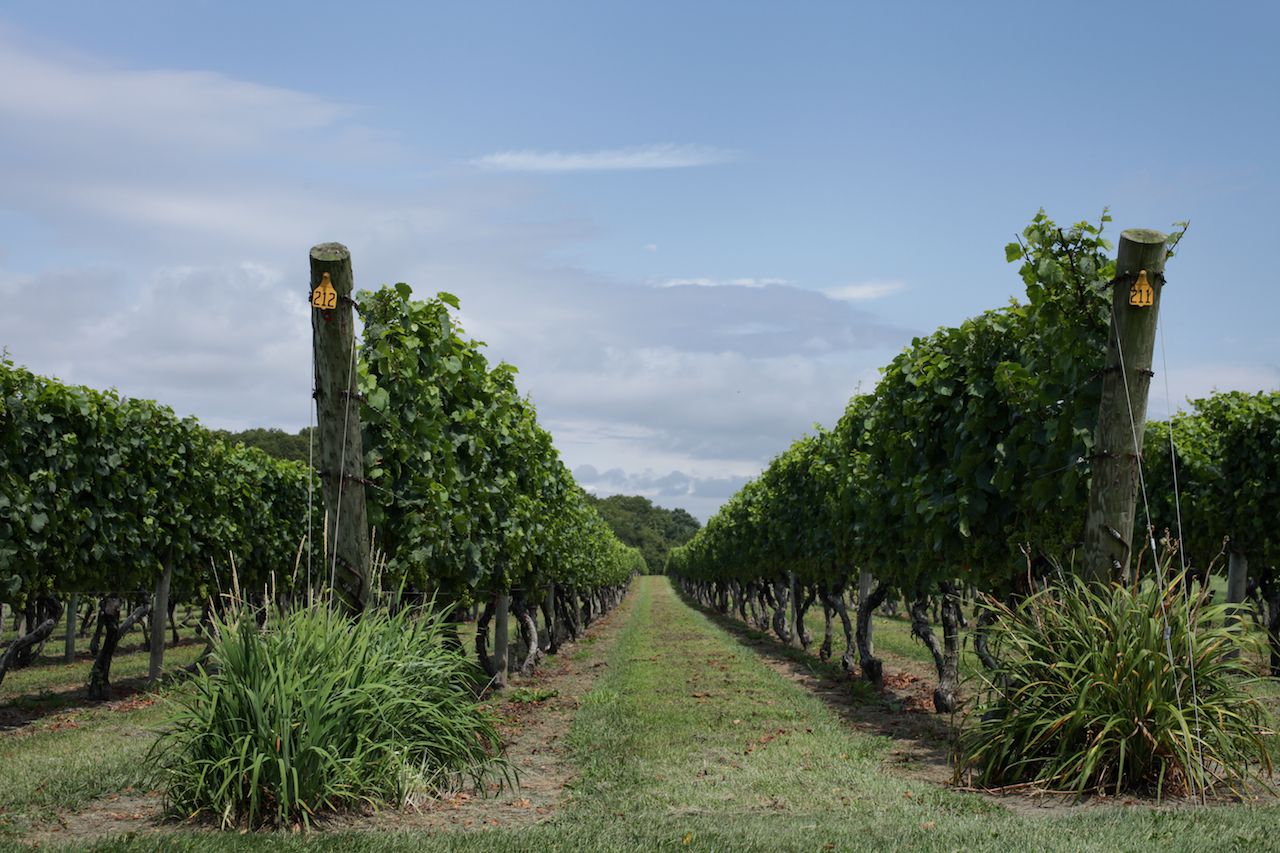 The marinas and mansions of the Newport coast evoke the Gilded Age of old New England. Inland, you’ll find a handful of wineries making unexpectedly fantastic wines. Coastal New England isn’t a place one would naturally think to grow high-quality grapes, but the warm waters of the Gulfstream and the temperate winds off Narragansett Bay make for a microclimate that lends itself to an extended growing season and some unique flavors.

Newport Vineyards Great White is a blend of grapes that takes on an almost-melon flavor and is but one of many offerings that don’t taste like wine found anywhere else. You’ll find the same at Greenvale Vineyards just up the road in Portsmouth, where the estate along the Sakonnet River boasts live jazz and colorful waterfront sunsets, brilliantly complemented by the smooth cab franc and bright Rosecliff Pinot Gris. 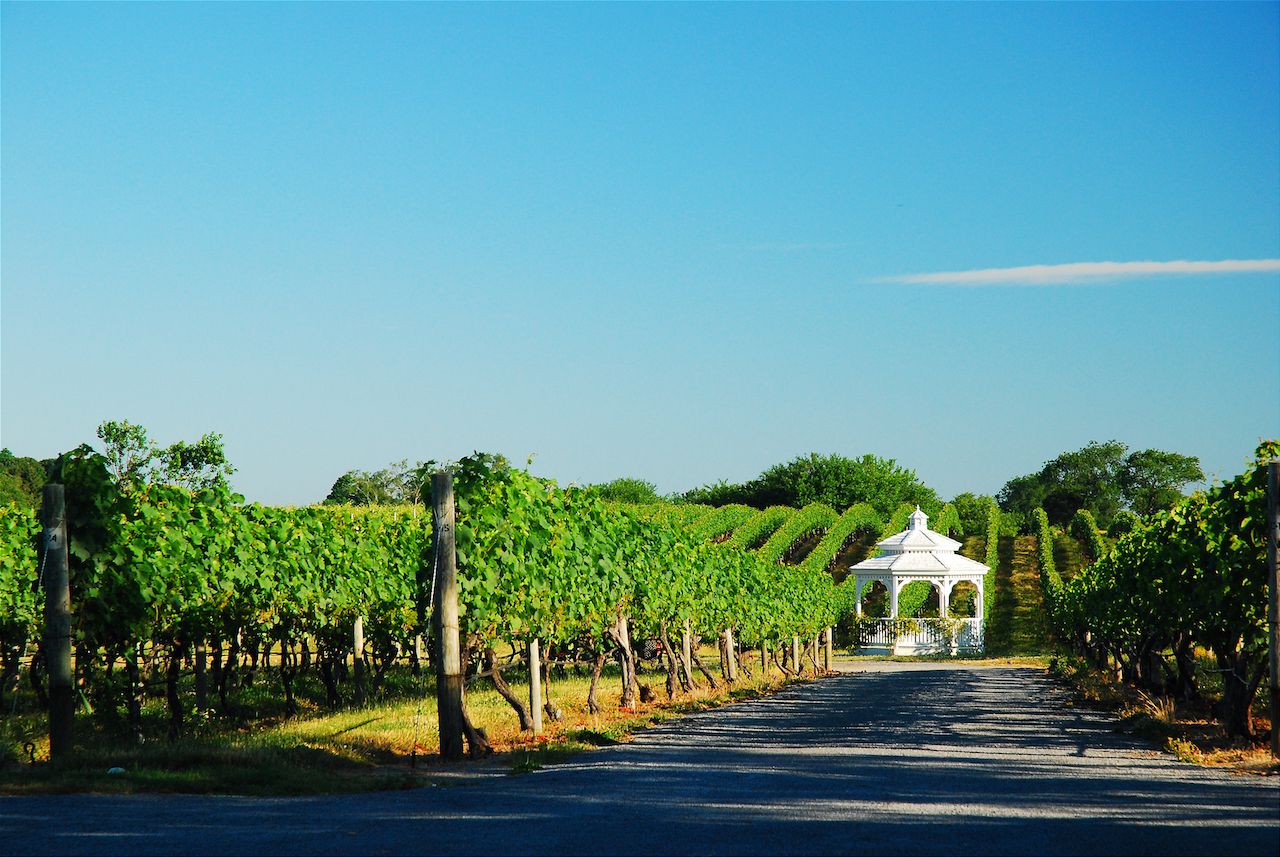 Few people expect New York’s quintessential bedroom community to be one of the best wine regions in the US, but spend a weekend in Long Island, and you’ll find not only fantastic wines but also remarkable pastoral scenery that’s enviably close to New York City.

If you want to see it with fall colors, know that in Long Island the leaves turn a little later than the rest of the Northeast. In late October, the leaves are turning but temperatures generally aren’t brutally cold yet, and a scenic drive up Route 25A will be a colorful blur of trees leading to scenic wineries. From spring to fall, we suggest spending a full weekend, during which you can tour country wineries like Harmony Vineyards with views out to Long Island Sound or Duck Walk Vineyards, where leafy trees surround a grand, green-roofed manor house.

The saltwater off the ocean and the mild, coastal climate make for crisp, acidic wines, long on old-world grapes and specialized rosés. Try the Wolffer No. 139 Rose Cider, the Sparkling Pointe Brut, and the Montauk Great White to get a sense of the bright flavors the region offers.