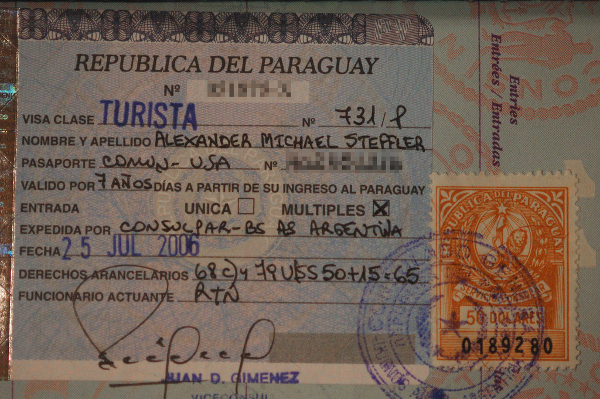 Megan Wood jumps from Argentina to Paraguay in 10 simple steps.

1. I’m in Buenos Aires looking to travel north to Paraguay. I lived there for two years and am really homesick for the being greeted by strangers with two sloppy kisses on my cheeks, the sharing personal items like forks and bottles of water without consideration, and the being told I’m hardworking for simply waking up in the morning.

Problem? I don’t have a visa. But I’m feeling spontaneous, so I hail a taxi and head to the Paraguayan embassy on Calle Las Heras before it closes at 14:00.

2. All I have is my passport, a passport photo, and US$65. There are lots of internet rumors that you need a notarized birth certificate, or a bus ticket, or the promise of giving up your unborn children. None of that is true. 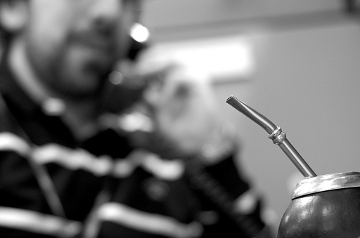 3. I join the end of a long line of Paraguayans waiting with their thermoses of yerba maté, but a guard rushes over and escorts me to to the agent behind the first glass window. “Foreign visa, muy rapido,” he insists.

I feel rude cutting the line, but I know he’s right — it’s a quick process.

4. At the window, I smile and greet the agent with “Mba`eichapa,” which means hello in Guarani. He responds with an enthusiastic “Nde!” — essentially, “I don’t believe it!” Small sounds of approval come from the Paraguayans waiting patiently behind me.

I fill out a short form and hand over my passport for overnight processing, pay, and leave. Had I shown up earlier and shelled out a little more, I could have received the visa the same day.

5. The next morning, I return to the embassy with my receipt and my smile, ignoring the line again. My passport is waiting for me, and I admire how good it looks with its colorful new visa, the dates inked in blue — good for 10 years. 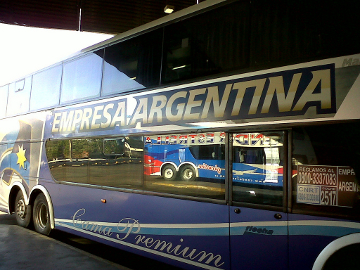 6. I take another cab to Retiro, BA’s main bus station, and choose one of the many buses heading to Asunción. They go all day, every day, and rarely sell out in advance.

One leaves about every half hour, and the cost is anywhere from US$40 to US$80, depending how far back you can adjust your seat.

7. Settling in to prepare for the 14-hour ride. The woman next to me reaches over and takes a swig from my water bottle without asking or saying thank you. Yup, I’m on my way.

I brought a compilation DVD of Rob Schnieder’s oeuvre, and the driver happily plays it on the overhead TVs for everyone to enjoy. It takes true comedic genius to make elderly Paraguayan women laugh at a joke in a language they don’t understand. I guess gigolo humor is universal.

When the money changers get on board to sell guaranis, I know we’re close to the border at Posadas. Generally, these guys are pretty honest, but I use the same common sense I would changing money anywhere else. They’re also hawking thick blankets, cooking oil, and Argentinian alfajores at black-market prices. 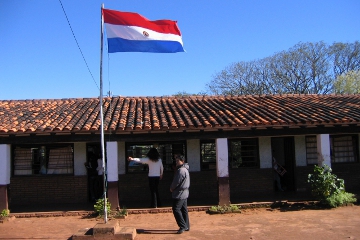 8. We arrive at the border. I grab my backpack and join the line with the other passengers to have my passport stamped and bags inspected. Luckily it’s not raining, as the line is outdoors and moves slowly.

9. Now things get sketchy. A man wearing a security uniform approaches and asks if I’m carrying electronics or a camera. Of course I am. The “officer” then tells me there’s a tax to bring electronics into the country.

He’s lying — kind of. There is a tax to bring in bulk electronics you plan on selling, which I’m not doing. But he’s pressuring me and the line is moving and his shirt says SECURITY.

He wants me to give him my gadgets while I pass over the border, and he’ll return them on the other side. Of course, once I get through, he demands a fee for all the tax money he “saved” me. I should’ve pretended I didn’t speak Spanish.

10. I get back on the bus passport-less. 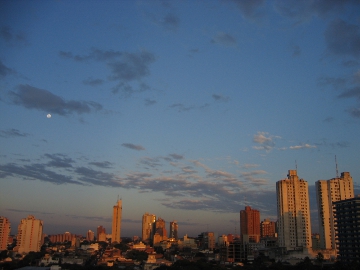 Once everyone is on board, a bus agent walks down the aisle returning documents to passengers. He laughs at himself as he attempts to pronounce my name. “Me-Ga Woo?” Sounds like an Asian superhero. Close enough.

An hour later, I’m at the Asunción bus terminal. I stare at a grandmother while she lovingly scolds a child in Guarani. She sees me, we lock eyes, and she comes at me mouth first, planting two wet ones on my face.

Megan sent in this story in response to our Call for Submissions: Getting Visas / Crossing Borders. If you’d like to tell your own, follow the link and get in touch.