Travel links between Manchester and the rest of the country are so well established that venturing out from the city is easy. Manchester’s not just surrounded by historic mill towns and seaside favorites, but it also sits at the heart of great swaths of the UK’s best-loved green spaces. Whether you fancy a leisurely stroll through a grand Victorian town or a strenuous hike up a mountain, there’s a day trip with your name on it. 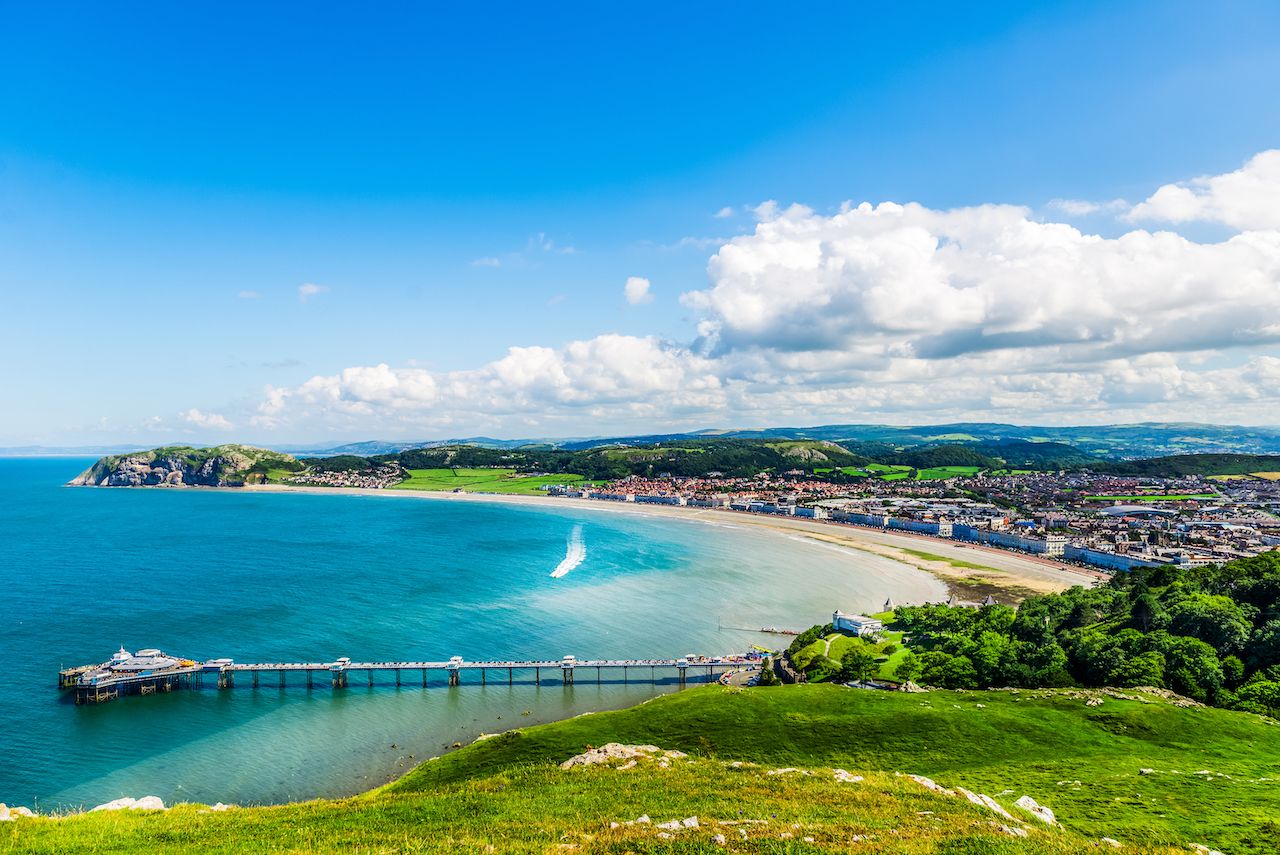 Llandudno — Tick another country off your bucket list — no passport required. Spend the day in Wales at one of the most handsome and well-preserved seaside towns on the west coast, which you can reach in an hour and a half by car or via one of several trains departing Manchester every day.

Llandudno’s charm lies in the miles of pebbly beach, immaculate Victorian hotel facades, ornate pier, and stunning view from the top of the Great Orme, a hill overlooking the town and the Irish Sea. You could easily spend a day lost in the amusement arcades and on the pier, but don’t miss the Orme. You can either make a very steep hill ascent on foot or take the authentically historical Great Orme Tramway to the summit.

You’ll be hungry from all that walking, or sitting in a tram, so order a traditional round of fish and chips from the excellent Fish Tram Chips at the foot of the Orme. If you’d rather have something that doesn’t come out of a paper wrapper, then the popular Cottage Loaf pub offers a full menu along with open fires, atmospheric surroundings, and an outdoor seating area. 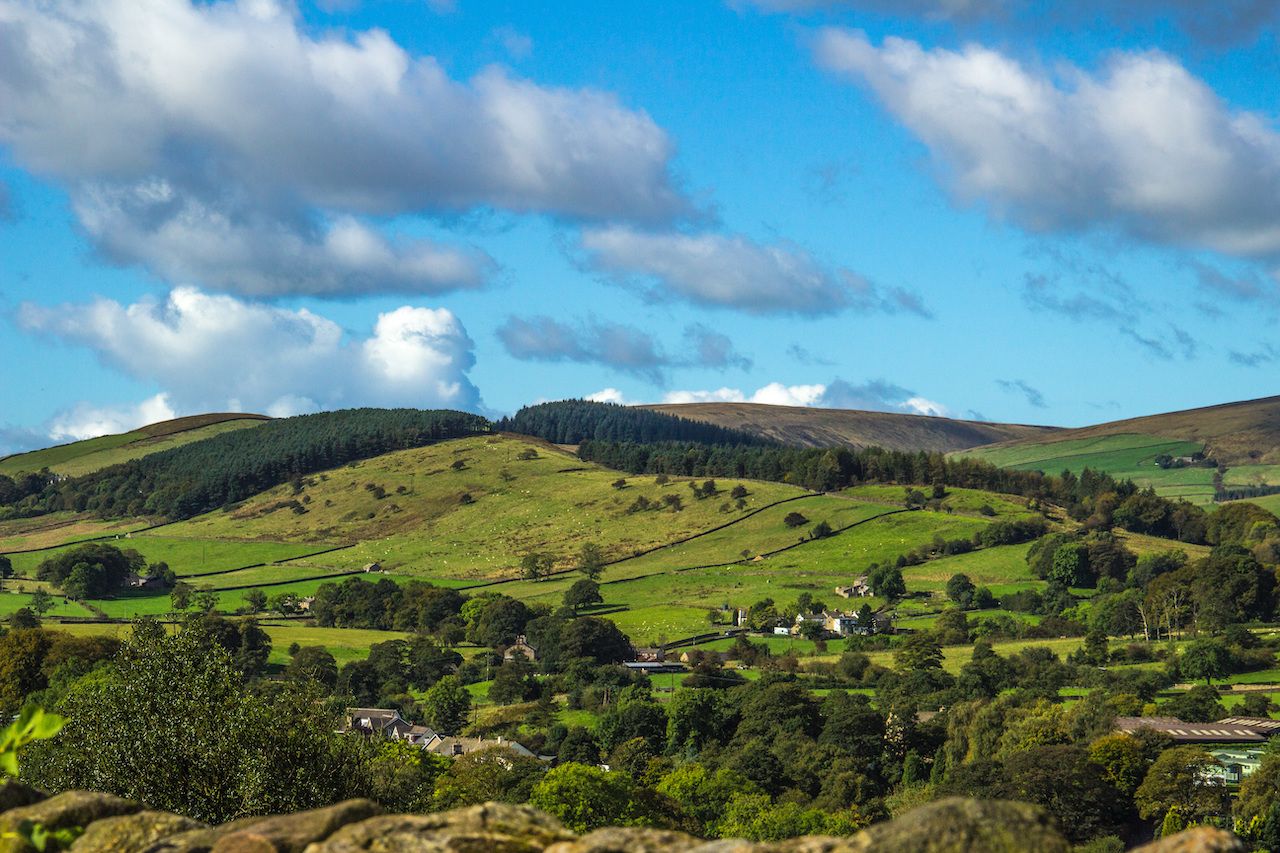 Ribble Valley — If ever there was an area of the UK where the epithet “rolling countryside” was richly deserved, it’s the Ribble Valley. Better to have a car for this one as the best way to arrive is via the shady country lanes that connect towns like Whalley and Clitheroe. It’s only about an hour to Clitheroe, so there’s plenty of time left to explore.

Spend the morning at Clitheroe’s renowned Holmes Mill, a former textile factory turned food and hotel complex, where you can indulge in prized local foods like Bowland venison and crumbly Lancashire cheese. Up above the town are the ruins of Clitheroe Castle, a 12th-century keep with excellent views of Pendle Hill, and a local history museum with an entry fee of around $6.

A 10-minute drive west brings you to Hurst Green, the starting point for the Tolkien Trail. The trail is a 5.5-mile ramble through the fields, woods, and gardens of Stonyhurst College, all of which were reputedly part of J.R.R. Tolkien’s inspiration for Middle-earth. There are many options for food, but the most prized is the Michelin-starred Northcote Manor. For a less costly alternative there are excellent gastro pubs nearby, including the Freemasons at Wiswell and The Three Fishes. 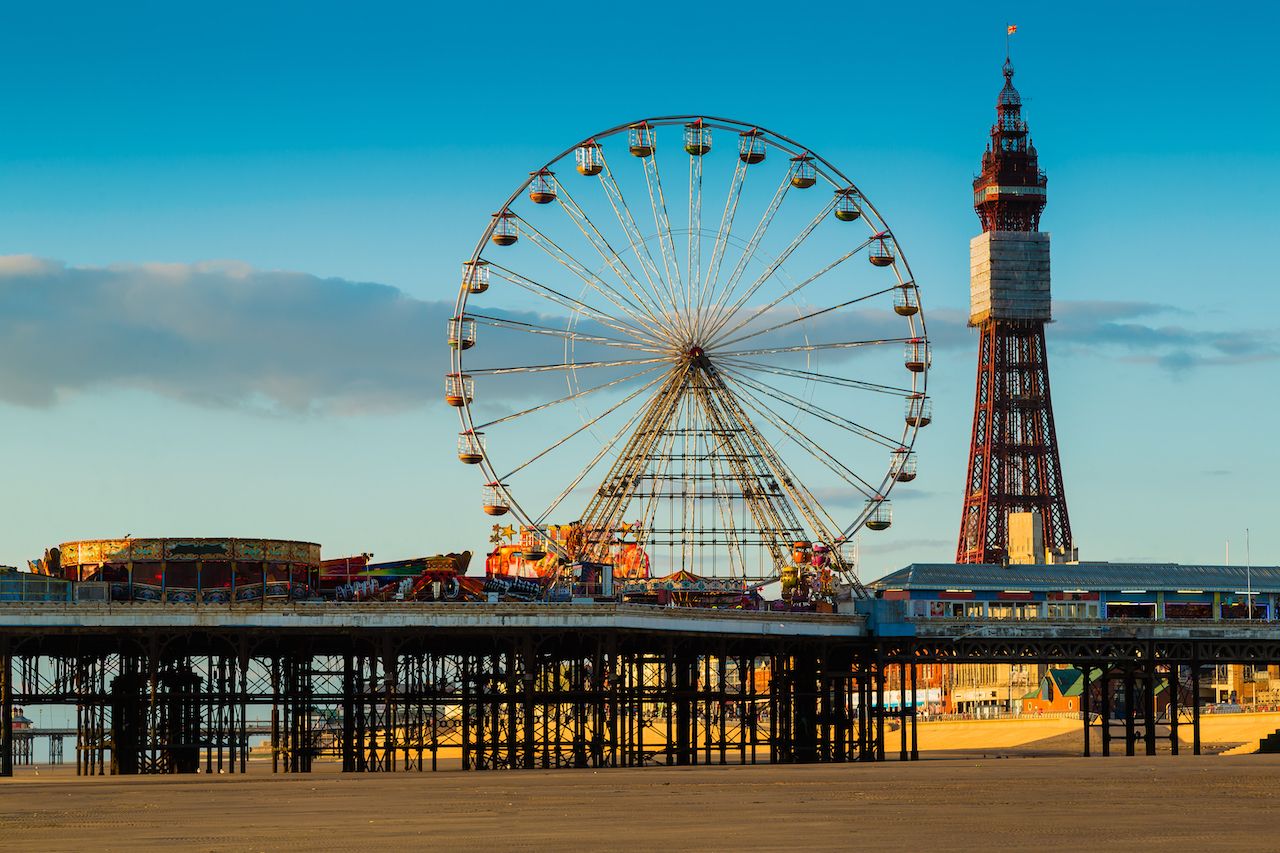 Blackpool — An hour and a half either by rail or car, Blackpool is one of those excessive, beach-side party towns that can be a little overwhelming for the faint of heart. Search beyond the day drinking and the sad-looking hamburgers, however, and you’ll see that it’s not without its charms.

For one thing, if people-watching were a sport, then they’d host the Olympics here every time. But beyond the neon lights and the raucous British humor, there are miles of golden sand lining the coast. The town also has three well-preserved piers to stroll on and watch the anglers fishing for dabs and dogfish.

The town’s most iconic landmark is Blackpool Tower, a steel spire modeled on the Eiffel Tower, for which you can buy a ride to the top along with other attractions within the building. A big draw for rollercoaster fans is the Pleasure Beach theme park, which houses the highest ride in the UK in the form of The Big One.

You’re never short of things to do in Blackpool, but the smart money is on a long walk down the seafront, some wasted cash in the amusement arcades, and then an ice cream at Notarianni, whose “you can have any flavor you like as long as it’s vanilla” approach has been a local favorite since 1937. 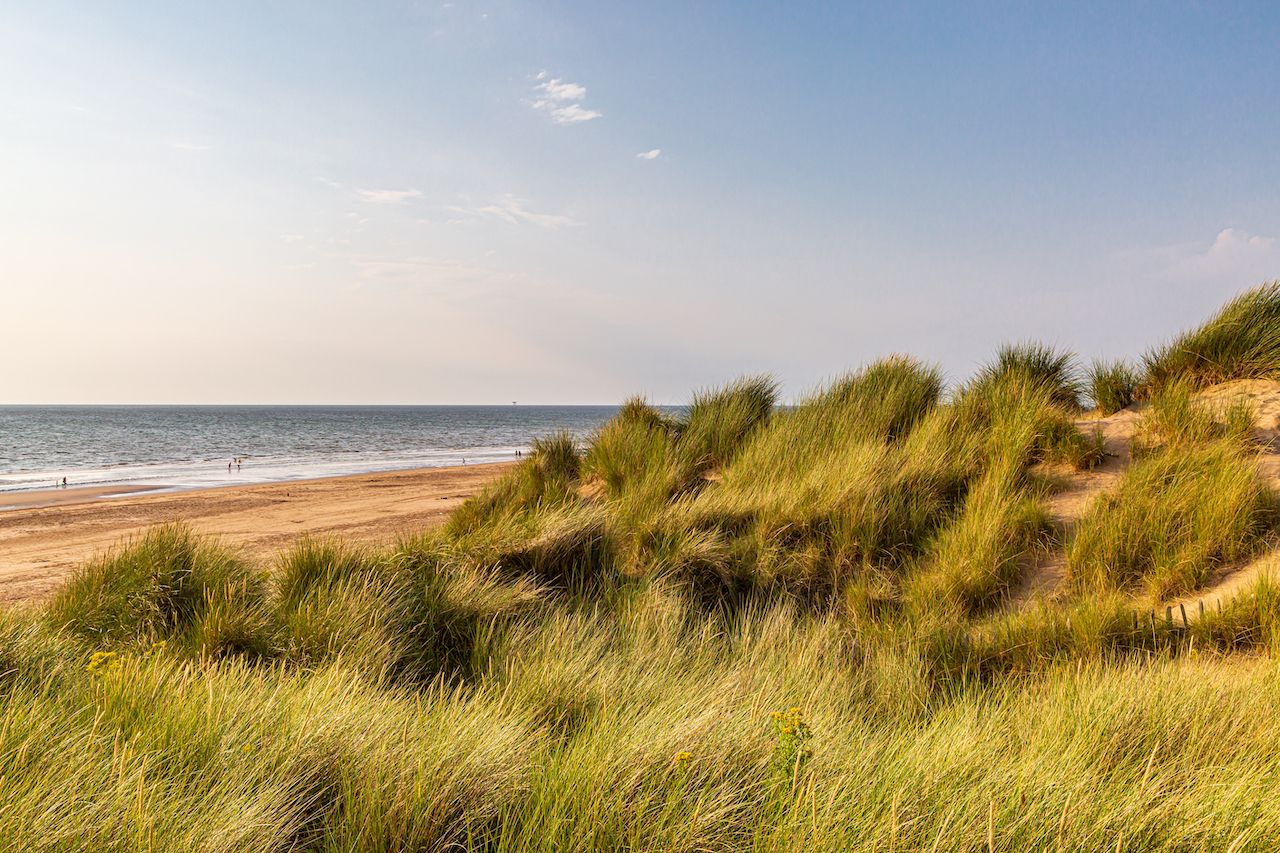 Formby Sands — Formby is at the other end of the seaside scale from Blackpool: wild, natural, sedate. It takes a little over an hour by car, though by public transport it’s goes up to two. It’s quicker to take a train via Liverpool, but the longer route through Southport gives you another option for the way home. Pack a blanket and a flask of coffee and start early for Formby, a huge swath of sand dunes that sits on the sea through a quiet coastal forest. On your way through the trees, look out for the rare sight of red squirrels, a once common British animal population that has now dwindled away to sparse numbers in remote areas. The beach and dunes are perfect for walking, sitting, games, and sliding down while pretending to be Luke Skywalker.

On the way home, visit Southport and see the ornate, wrought-iron verandas around the shopping precinct. Maybe even take a side trip to the funfair-esque Southport Pleasureland, or have a paddle in the swan pedalos on Marine Lake. For food, both Bistro 21 and Le Boulevard are good options. 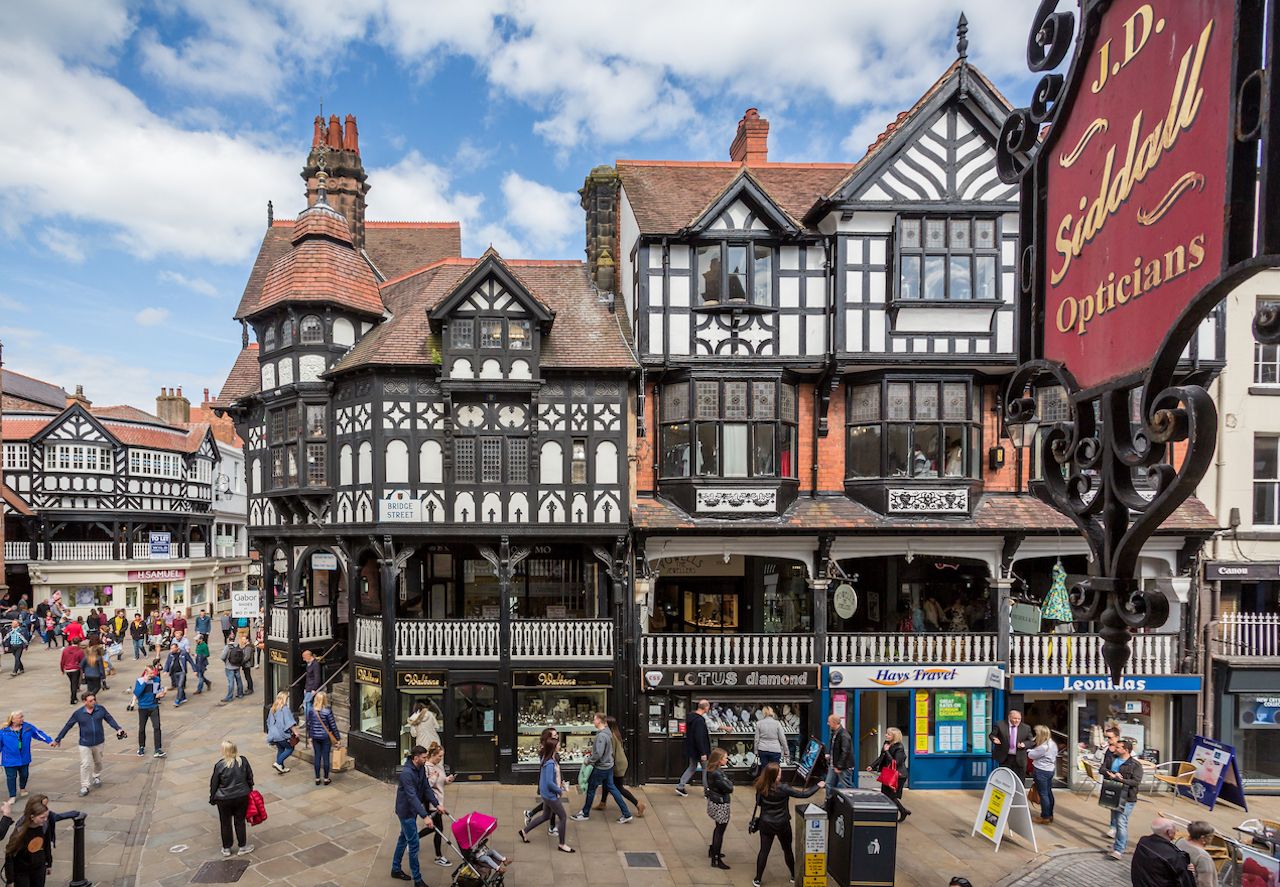 Chester — Constructed sometime in the first century, the Roman walls that surround the city of Chester are just one of the many historical highlights of a town rich in things to see. An hour by car or train, Chester’s famous walls are the best preserved of their kind in the country, so much so that you can walk atop their two-mile length for free. A good place to pause for photographs is at the highly decorative Eastgate Clock, a Victorian addition that’s the most photographed clock after Big Ben.

In the center of the city are unusual, tiered rows of shops built from black and white wooden frames. Some date from the 13th century while others are Victorian reproductions. Either way, they add a rich sense of the past to the pedestrian-friendly streets. After visiting the shops, there’s also the truly impressive medieval cathedral and the largest Roman amphitheater in the country.

There are plenty of places for lunch, but Marmalade is an especially tasty and friendly pit stop. 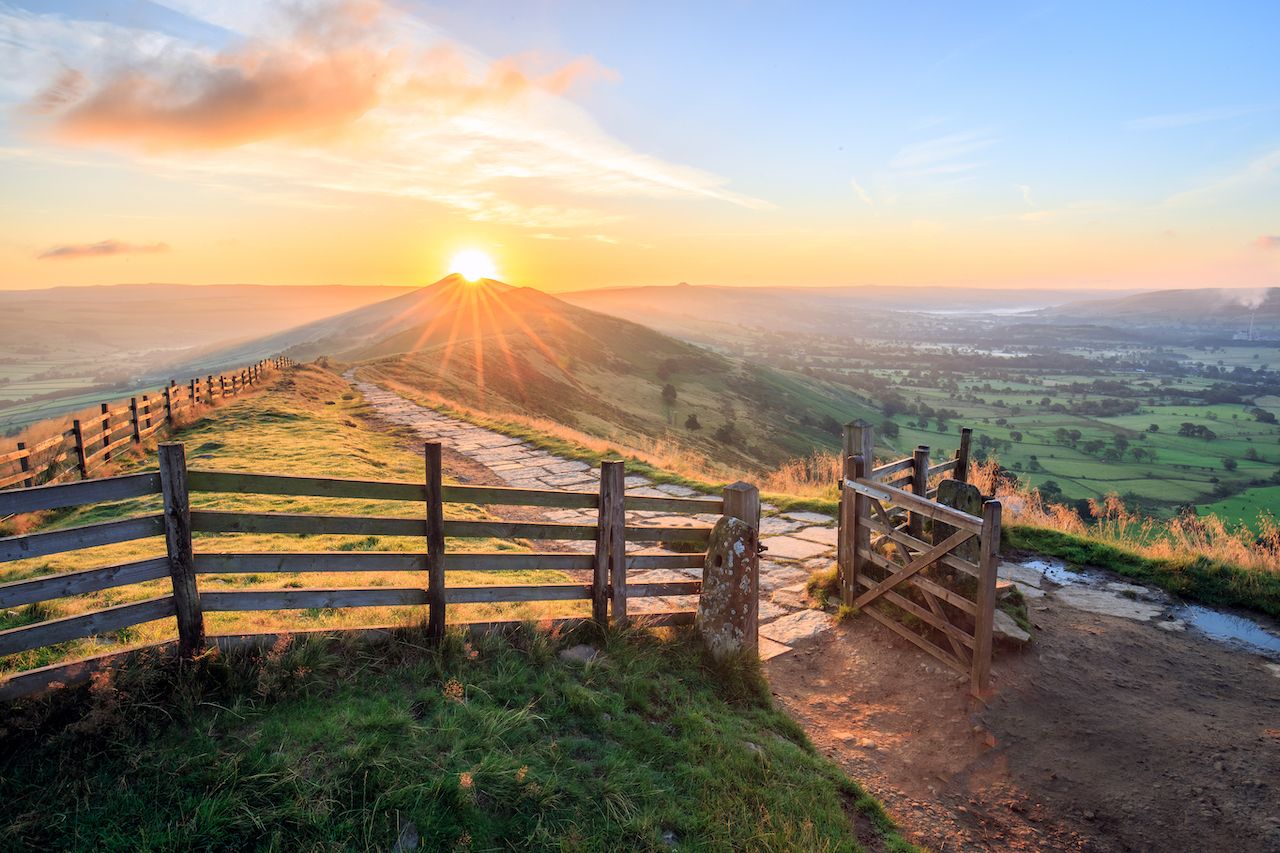 Peak District Villages and Mam Tor — Less famous than its neighbor to the north, the Peak District still has much of the beauty of the Lake District but is less crowded and closer to Manchester. By car, it’s an hour drive to Castleton, where there are numerous public car parks. On public transport, take the train to Hope village, and it’s a leisurely 30-minute walk, or a quick taxi, to Castleton.

Starting from the village, there’s a well-trodden hiking route up across the fields, the route being mainly marked by stone paths and gates. It’s a steep trek for the sure of foot, but the view from the summit of Mam Tor is tremendous. On a clear day, you can see the entire landscape of gritstone and limestone rock formations that make the Peak District such a favorite with hikers and photographers. The walk up Mam Tor and back to Castleton is between two and three hours depending on fitness, but arriving back in the village means you’ll be in time for a welcoming pub lunch at The George.

Among the things to see in the local area are Peveril Castle and Cave Dale to the south. The castle is the 12th-century ruins of a Norman fortress, while Cave Dale is famous as one of the pivotal locations for the classic ‘80s movie The Princess Bride. You can also find Speedwell Cavern, one of a number of underground cave systems where, for around $15, you can take a boat trip in the deep caves underpinning the Peaks. 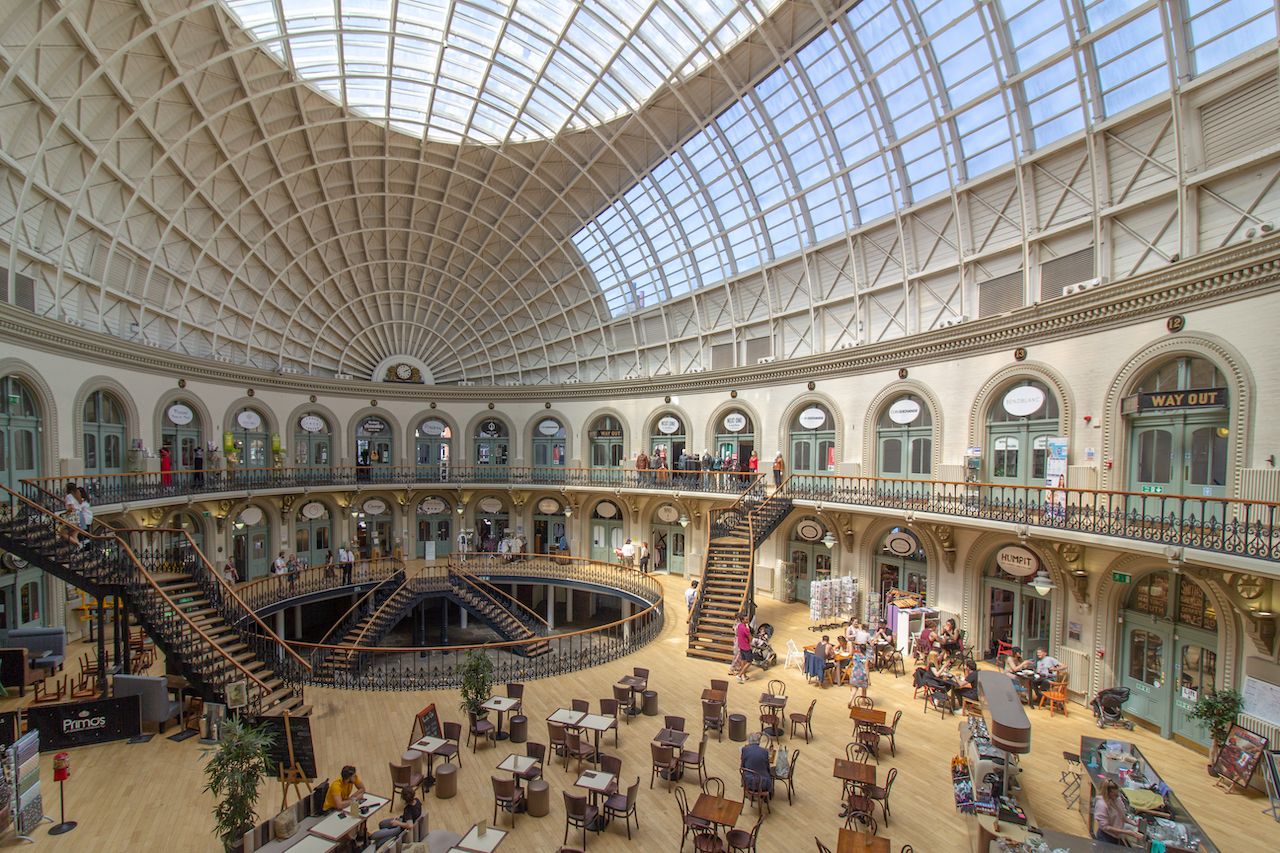 Leeds — A historical rivalry exists between towns lying on either side of the Pennine Hills, but don’t let that stop you from taking a day to visit our friends in Yorkshire. The train to Leeds is frequent and takes just under an hour. As another city with a rich industrial history, Leeds is awash with grand 19th-century warehouses and factories that have been put to vibrant modern uses.

Check out the former Corn Exchange, an imposing stone dome that now houses everything from jewelry designers to hot dog vendors. You’ll find plenty more shops over in the glass and steel arcades of the Victoria Quarter. Even if you don’t want to buy anything, the decorative stained-glass work is worth seeing.

If you want a spot of culture then visit Kirkstall Abbey for a tour through the iconic ruins of a 12th-century monastery and its celebrated gardens (admission is free). Though it may seem a bit niche, the Royal Armories museum features collections of weapons and a history of warfare that stretches back through human history. It also holds regular demonstrations and interactive displays such as jousting tournaments. A good call for lunch or dinner is Bundobust, a casual Indian bar that serves innovative vegetarian street food along with craft beers. 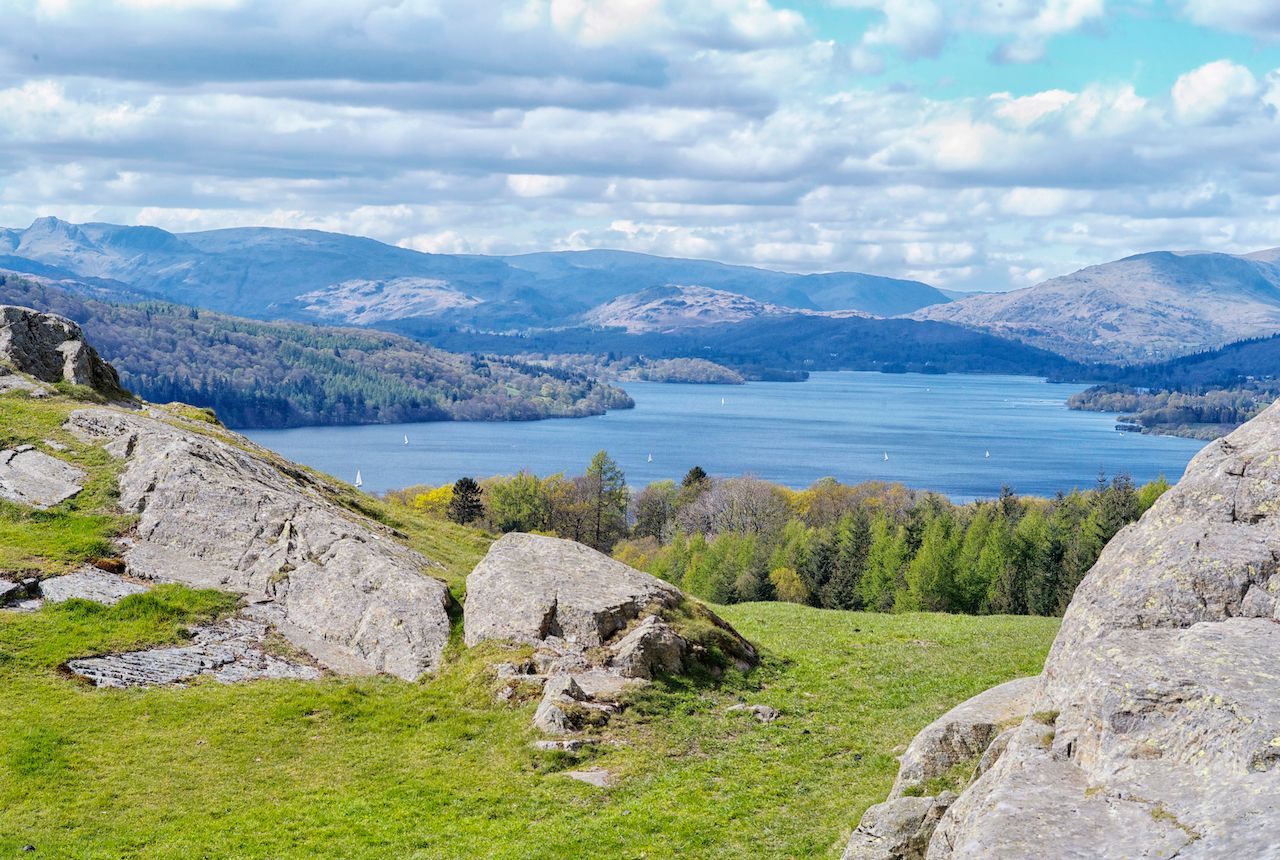 The South Lakes — If you came all the way to Manchester and then didn’t take a day to visit the accessible southern part of the Lake District, you’d be missing out. Taken as a whole, the Lake District is a vast national park filled with craggy mountains, verdant forests, fetching villages, and, of course, the eponymous lakes — of which there are 16. There’s so much to see and do that you could easily spend a week in this beautiful, unique place, but a day is still enough to enjoy some highlights.

By car, it’s just over 90 minutes to Windermere, a good place to base yourself. It’s a little more tricky on public transport, but there’s a bus or a combination of two trains — Manchester to Lancaster to Windermere — that both take about two hours.
From Windermere, make your way to the popular tourist town of Bowness-on-Windermere, a lakeside hotspot where you can find all manner of distractions. Around $15 affords you scenic cruises on the lake while other activities include The World of Beatrix Potter, an exhibition space that focuses on the author and her work. If you do have a car, you can trip over to the western side of the lake and enjoy Grizedale Forest, a perfect place to rent mountain bikes or take a sedate walk away from the tourists. Back over in Windermere, have a look at The Crafty Baa, a quirky pub serving sharing platters in a friendly setting.