The skies may occasionally be grey in the northwest of England, but you could never say that it’s a dull place. Throughout the year, festivals of all kinds celebrate the radical diversity of the people who make up this place. Here you’ll find devoted craftspeople perfecting the art of brewing beer or making cheese, Pride celebrations that ring with color and life, and cultural conversations meant for both adults and kids. 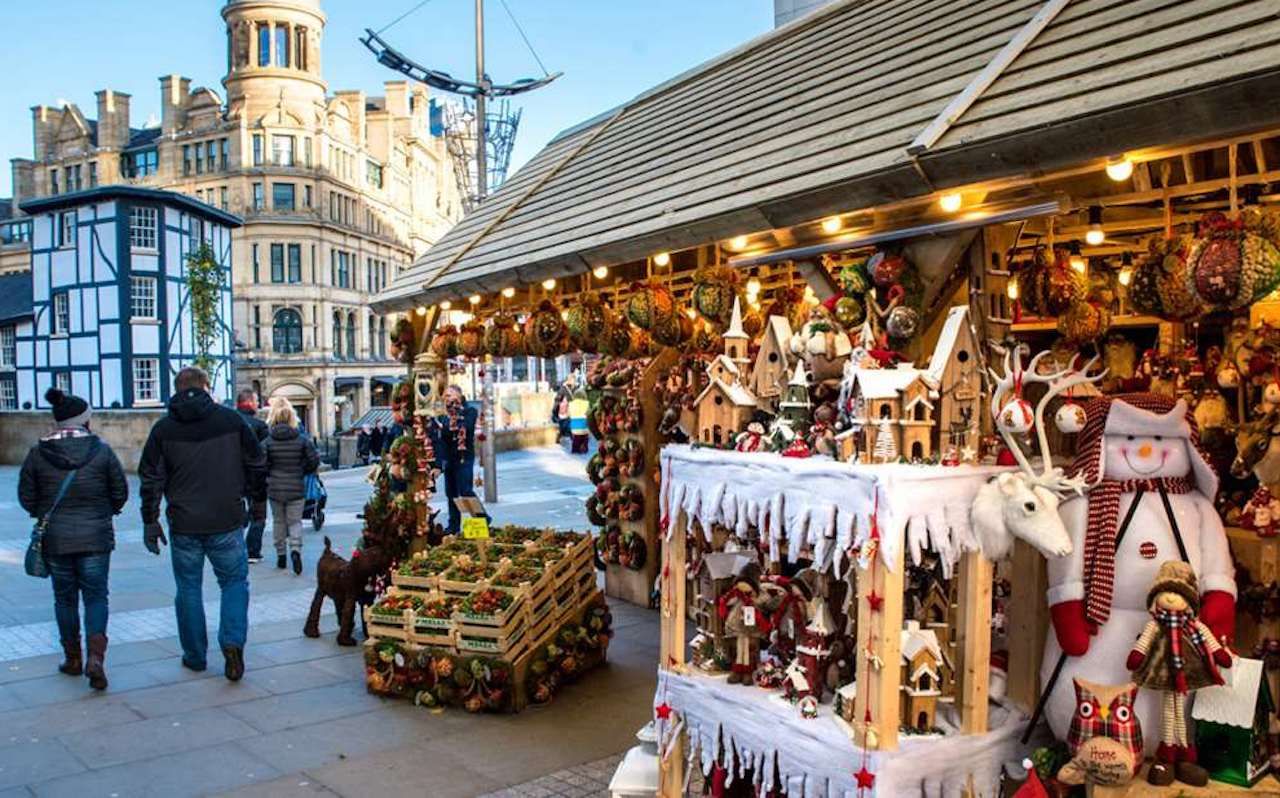 Christmas markets — Manchester’s Christmas markets are an enviable sprawl of food, drink, and good cheer. Throughout November and December, hundreds of small wooden huts fill the streets with fairy lights and the scent of an alpine festive season. The event attracts huge crowds who come for nightly glasses of mulled wine and sizzling bratwursts in the open air. It’s free to wander around, and the friendly atmosphere makes it one of the best times to be in the city. Who knows, you might even pick up a last minute gift for grandma.

When: November and December

Manchester International Festival — MIF is one of the most ambitious and large-scale public art festivals in the world. Running biennially, MIF brings together artists from all different corners of the art world and curates collaborations of new, cutting-edge work in a variety of locations. Previous contributors have included some global names such as Bjork and Massive Attack, but there are many lesser-known performers exhibiting work, from dance to opera and film to exhibitions. Tickets for the high-profile events sell out well in advance, so make sure to check the website.

When: Biennially across dates in June and July 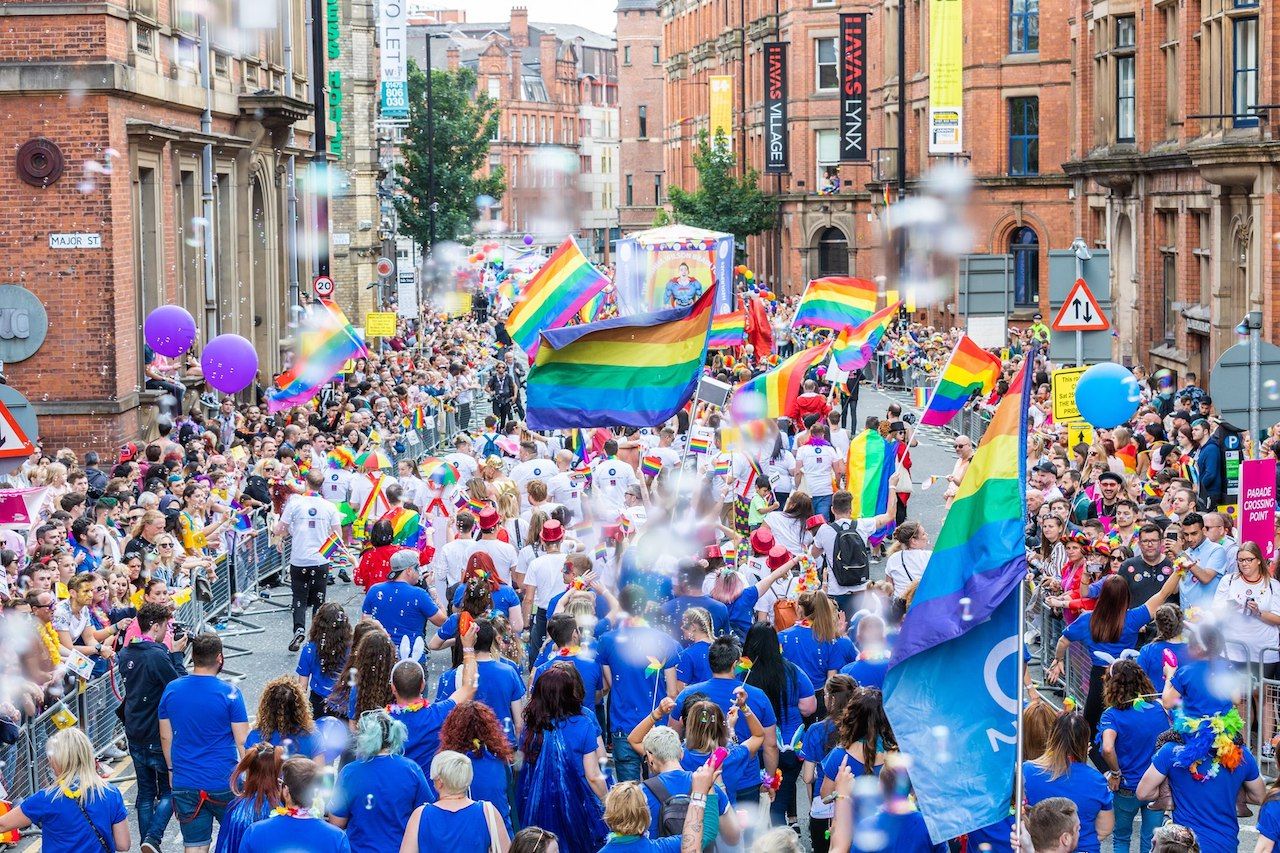 Manchester Pride — Each year, on the last weekend of August, we drape the city in a rainbow flag, and everyone’s invited. Pride is a big deal here, and the LGBTQ+ community has been parading, partying, and creating awareness since the mid-1980s. At the heart of the four-day celebration is the free Pride parade, which brings tens of thousands of participants and onlookers together in a cheering tidal wave of color and sound. Important too are the ticketed concerts and parties taking place in the Gay Village and at the redeveloped Mayfield warehouse. If you’d like to see another side to Pride, though, there are also candlelit vigils and cultural programs. A word of warning: If you’re going to come to the city in late August, make sure you book accommodation in advance.

When: The last weekend in August 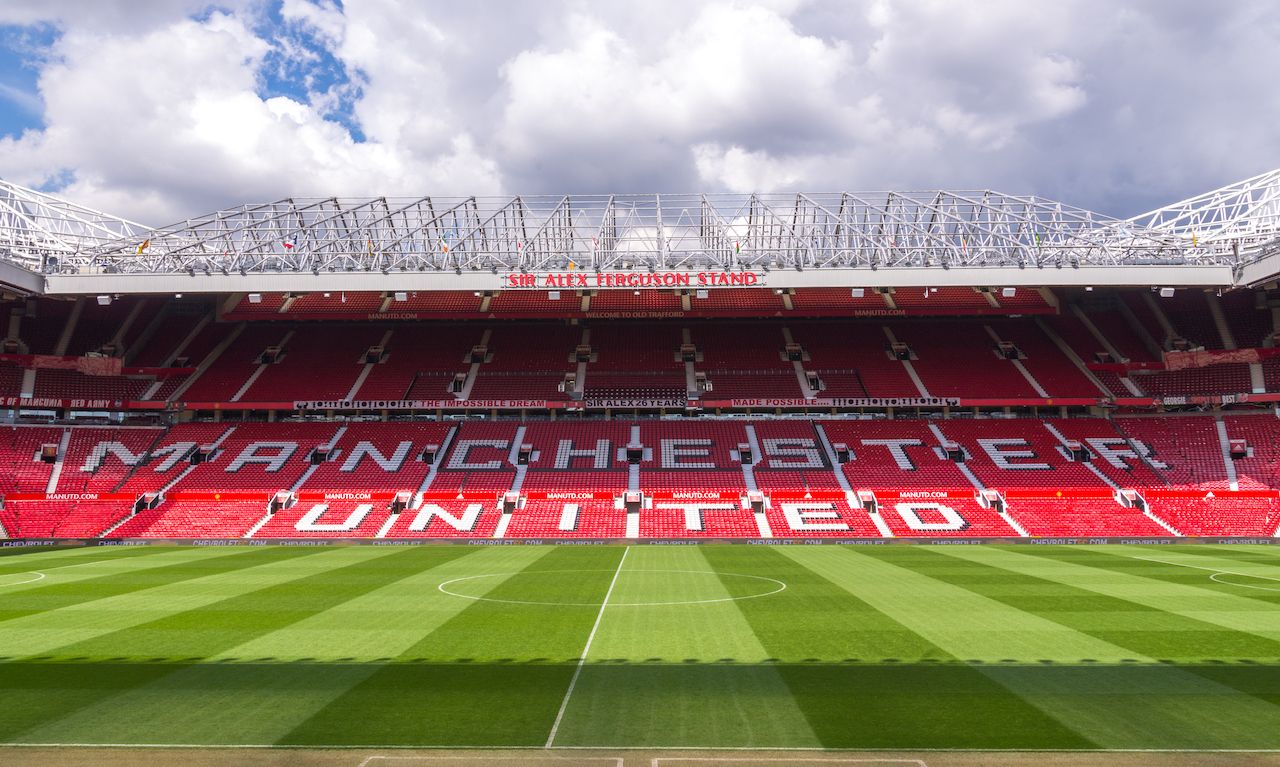 Manchester City and Manchester United — You can’t discuss Manchester without talking about the city’s sporting color divide between blue and red. Every weekend (and plenty of weekdays, too) fans assemble in the tens of thousands to watch two of the most famous soccer teams in the world take on domestic and international opposition. Tickets aren’t cheap any longer, but the stadiums are vibrant experiences that attract tourists from across the world. The big question is who do you choose to support: City or United?

When: The domestic season runs from August until May. Most weekends will have one of the Manchester sides playing at home.

The Makers Markets — These markets are filled with local folk doing what they’re passionate about, namely making unique, small-scale products. It also helps that there’s plenty of great food stalls and musical performances. The markets rotate their location and their traders, so check the website to see who’s going to be in town when you are. One insider tip: Make sure you catch the Great North Pie Co. for its supremely tasty savory pies.

When: Each weekend across local locations and nearby towns 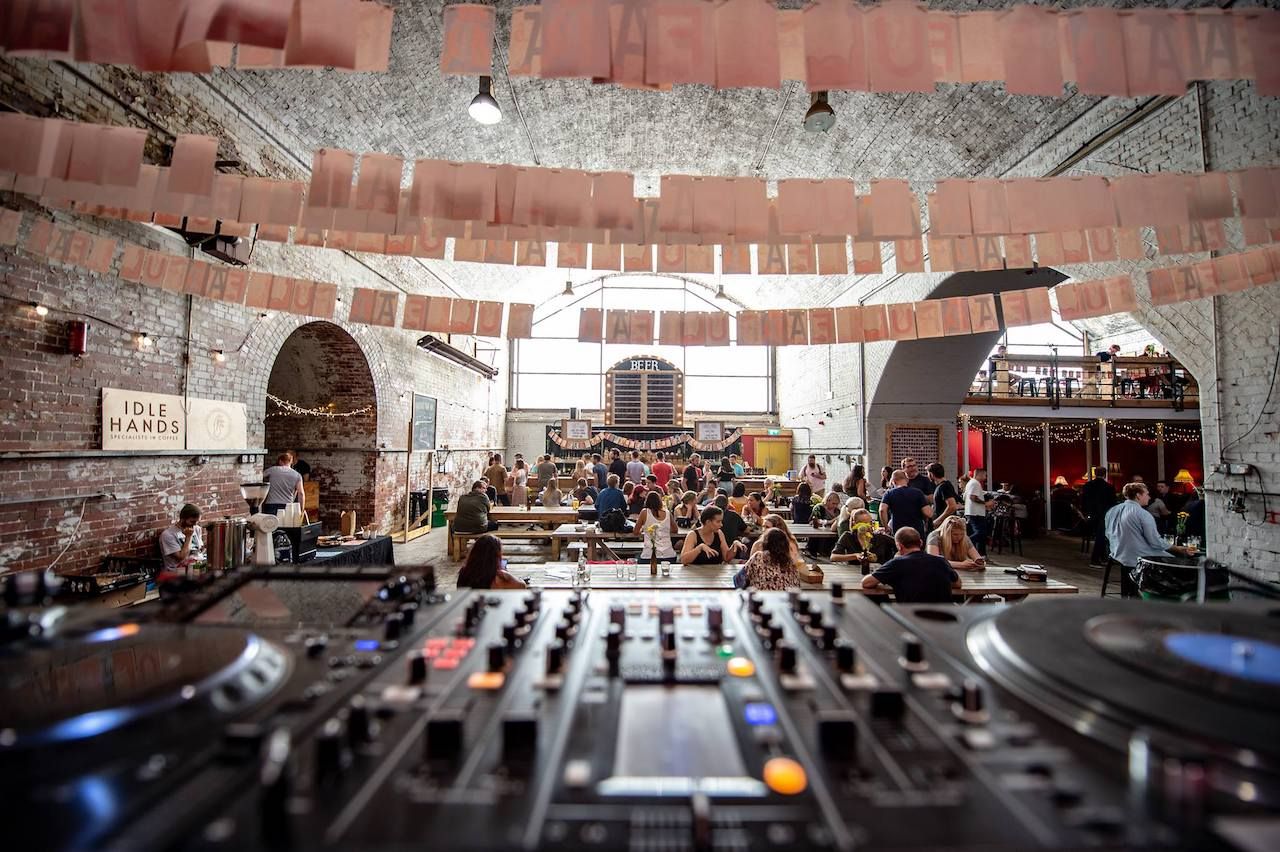 GRUB — If the idea of street food means more to you than cramming down a donut outside the store because you couldn’t wait to get home, then GRUB is the one for you. The city’s biggest weekly street-food fair is a free event where you can sample delicious morsels from a rotating cast of players. From Neapolitan pizza to Korean bulgogi, every Friday and Saturday at Fairfield Social Club there’s something new to gorge on. On Sundays, too, they run their Plant Powered Sundays, which is 100% vegan-friendly food.

When: Weekly from Friday to Sunday

Manchester Jazz Festival — Modern British jazz music is filled with boundary-pushing soloists and ensembles that have become leading lights in the genre. The ability to corral so many of these talents together is what makes MJF, Manchester’s longest-running music festival, such an exciting proposition. The festival doesn’t have a set date, or even a set number of days, but each summer a wealth of jazz talent takes overpaid venues and plenty of free stages across the city for our greatest pleasure.

When: Annually with dates varying between May and August 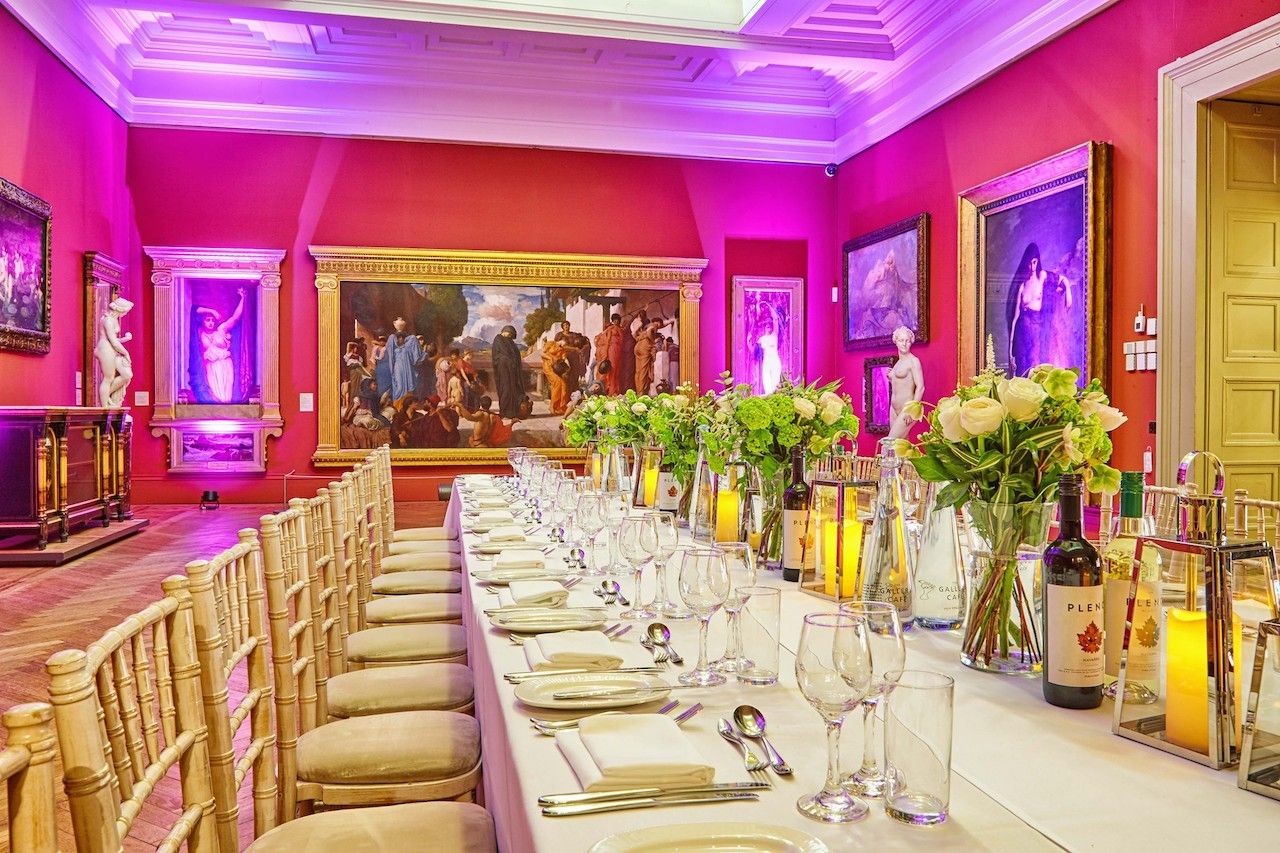 Manchester Food and Drink Festival — Although it culminates in an award ceremony that you really don’t need to be part of, the MFDF is worth visiting for anyone with an interest in the gourmet. The festival has been in operation for two decades now, and in addition to attracting some of the best chefs in the world for demonstrations, pop-up events, and talks, there’s a smorgasbord of events that celebrate regional producers and other food- and drink-related businesses. In addition to the limited tickets available for some meals and chef demonstrations, there’s a free-to-enter food village where you can eat and drink the best the northwest has to offer.

When: Annually, two weeks in September and October