Far from its old image as a city of pies and pints, Manchester’s embrace of world food cultures is attracting chefs with global reputations, along with restaurants that cater to every budget and whim. The current food scene is rapidly changing, with new openings (and closures) happening on a weekly basis. That makes it all the more interesting for visitors, as there’s a chance they arrive before the next big thing is discovered by most locals. From hole-in-the-wall ramen shops to full on gastronomic experiences, here’s what you need to know about eating in the Rainy City. 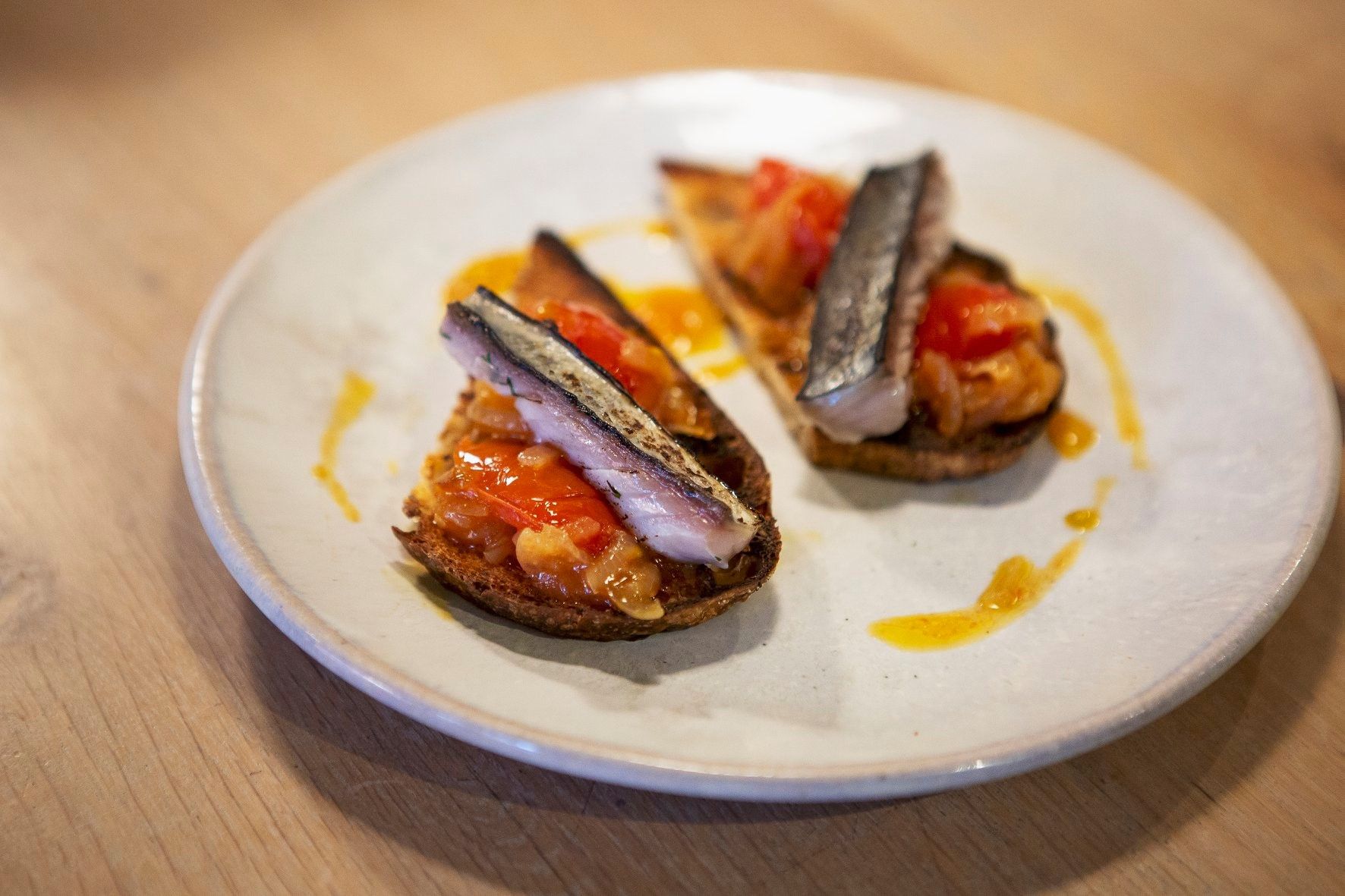 The Creameries $$ — To describe The Creameries as simply a suburban bakery and restaurant is a grave injustice. Certainly it is those things, along with a community hub and a fine coffee house, but under the stewardship of Mary-Ellen McTague, it’s also one of Manchester’s best examples of an ethical, exciting food business. The menu changes constantly according to seasonal availability, and the blend of traditional ideas with modern British cooking means that you’ll always find some variation on appealing plates of roast game, fresh shellfish, and fragrant handmade breads. Oh, and cheese. Lots of cheese. 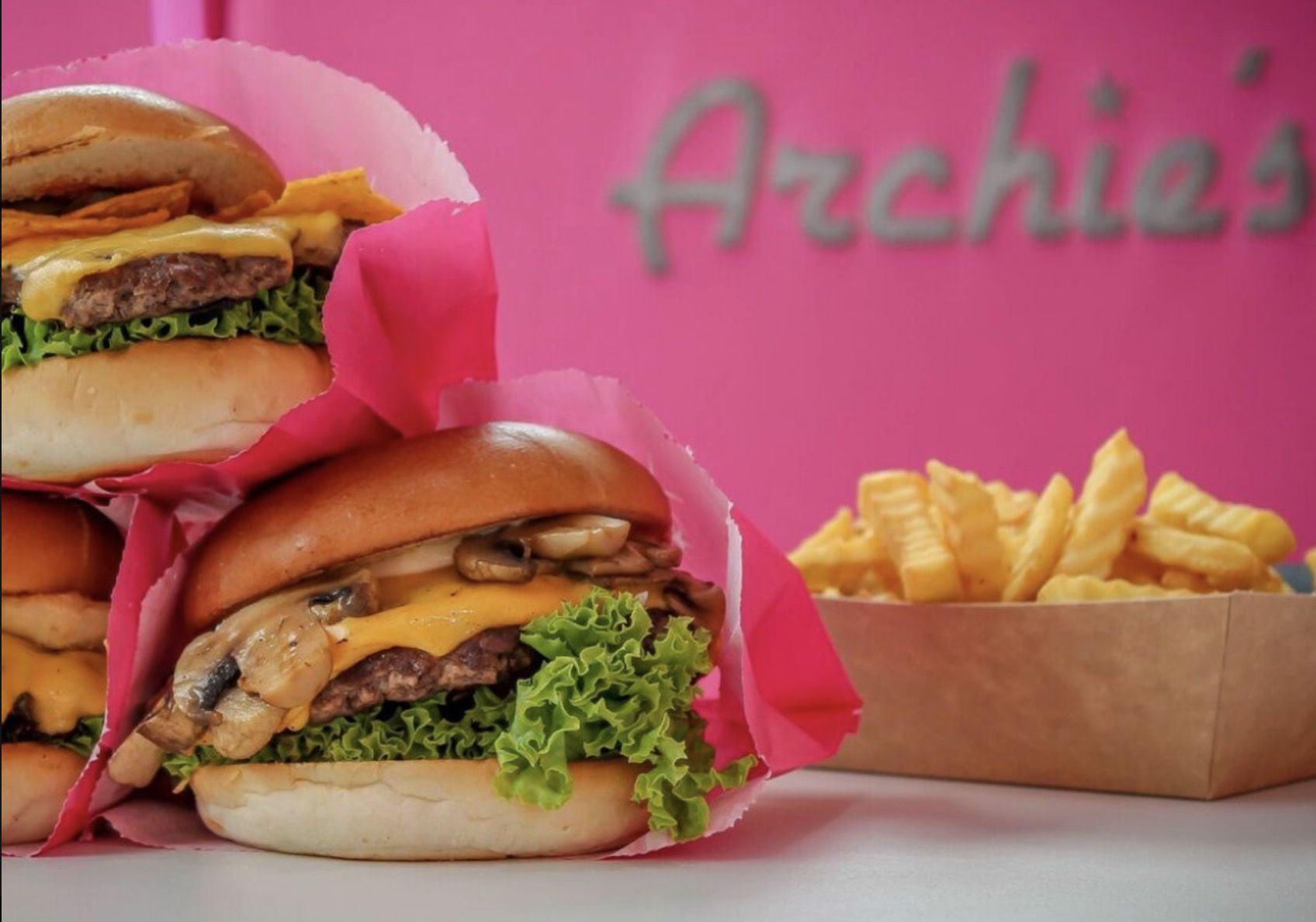 Arndale Food Market $ — The food market concept in the UK is often depressingly dominated by coffee shops and chains. Skip the burgers and bland pasta and go straight to the food market by the Arndale Center’s High Street entrance for everything from chargrilled kebabs to Asian tacos at the renowned Fusion Lab. A real treat are the irresistibly crispy crab balls and succulent oysters on offer at Holy Crab.

Umezushi $$ — Manchester’s best sushi place is Umezushi. The simple wooden dining room is stashed under a railway arch out of everybody’s eye line. The restaurant serves fat, buttery slices of sashimi along with warm sticky rice, and there are specials that change daily. It’s also not Jiro-level expensive, so you can have an extra nigiri or two. 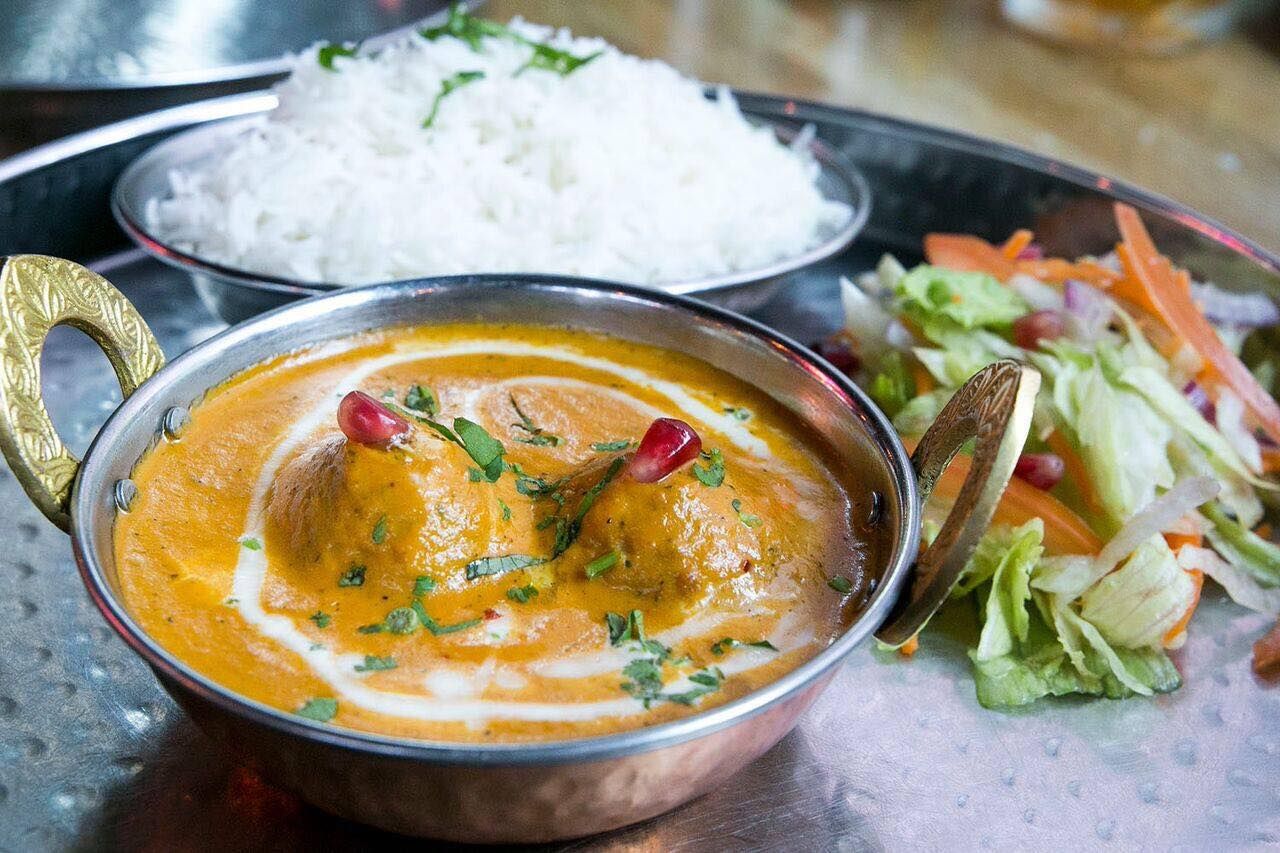 Indian Tiffin Room $$ — It’s an almost impossible call in a city with so many Indian restaurants, but the range of light, tasty south Indian dishes at ITR just may be the best in town. It certainly does the same spicy curries as the others players, but what sets ITR apart is the appealingly bright, modern dining room and a menu that offers vegetarian-friendly specialties like idli and dosa. If you’re there for lunch, there’s a bargain set menu with thali (a platter of multiple dishes). Whatever you do, don’t miss the exceptional naan bread.

Happy Seasons $ — In the heart of busy Chinatown, Faulkner Street’s Happy Seasons may look like another forgettable den, but it’s one where you’re actually happy to queue for service that’s routinely frosty. You aren’t there to chat with the waiters, but for the Cantonese cooking that’s comforting, delicious, and cheap. While it may be known for the ducks hanging in the window (along with the ever-popular specialty of roast meat over rice), the vegetarian menu is one of the most widely celebrated by Mancunian non-meat eaters. 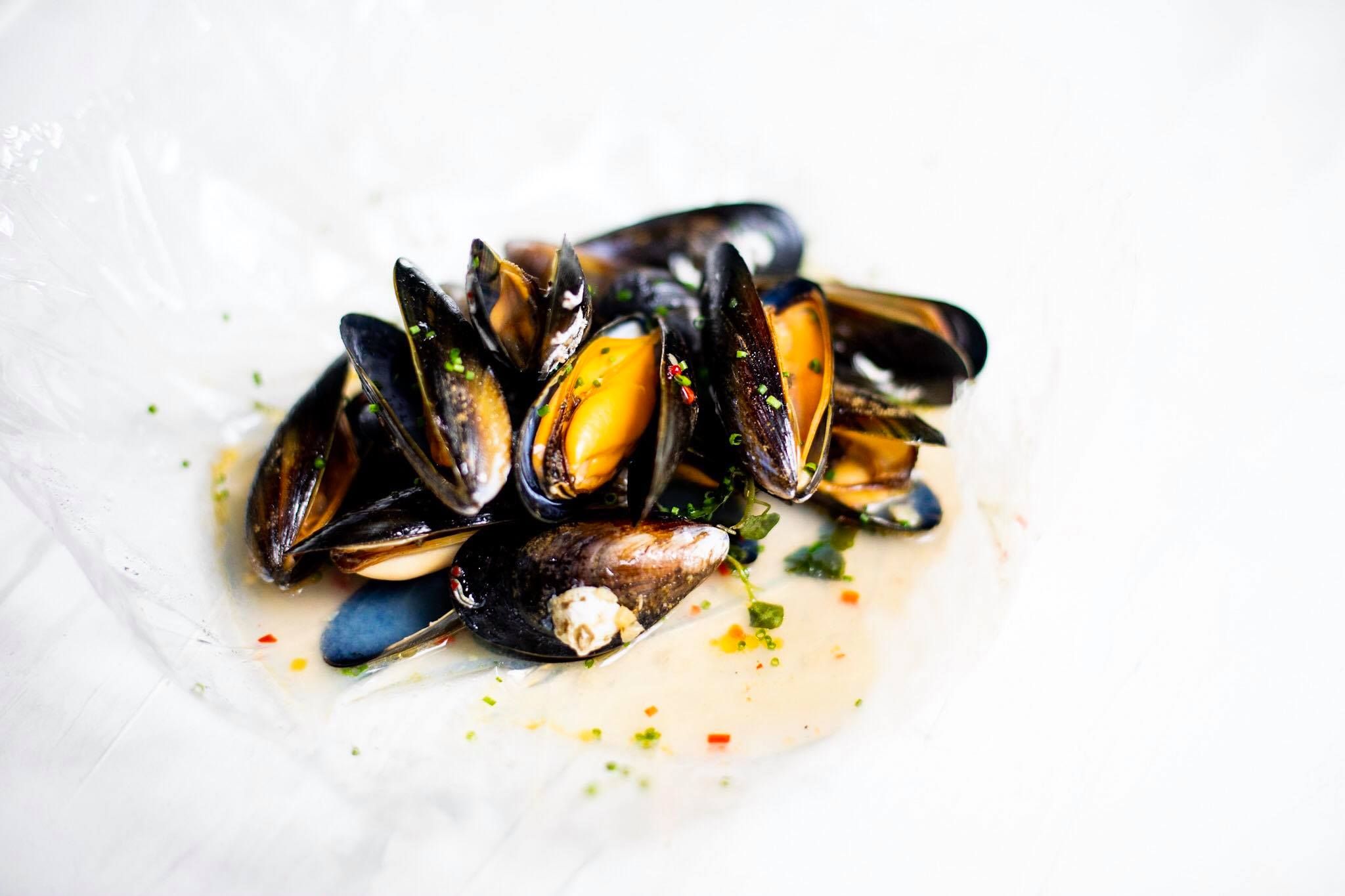 Tast $$$ — It’s hard to say why there’s a glut of excellent Spanish restaurants in the city center, but between Lunya, El Gato Negro, and Ibérica, this part of the city is tapas central. Tast is different, though. First, it’s Catalonian, not Spanish, and secondly, it’s three floors that encompass a tapas bar, a formal restaurant, and a tasting-menu-only dining room. If you have the money, then the Enxaneta tasting menu, developed by Michelin-favorite chef Paco Perez, is a decadent trip into modern Catalonian gastronomy. Book in advance (it’s only 14 seats), put your best clothes on, and expect a night of caviar, truffles, and tartare. 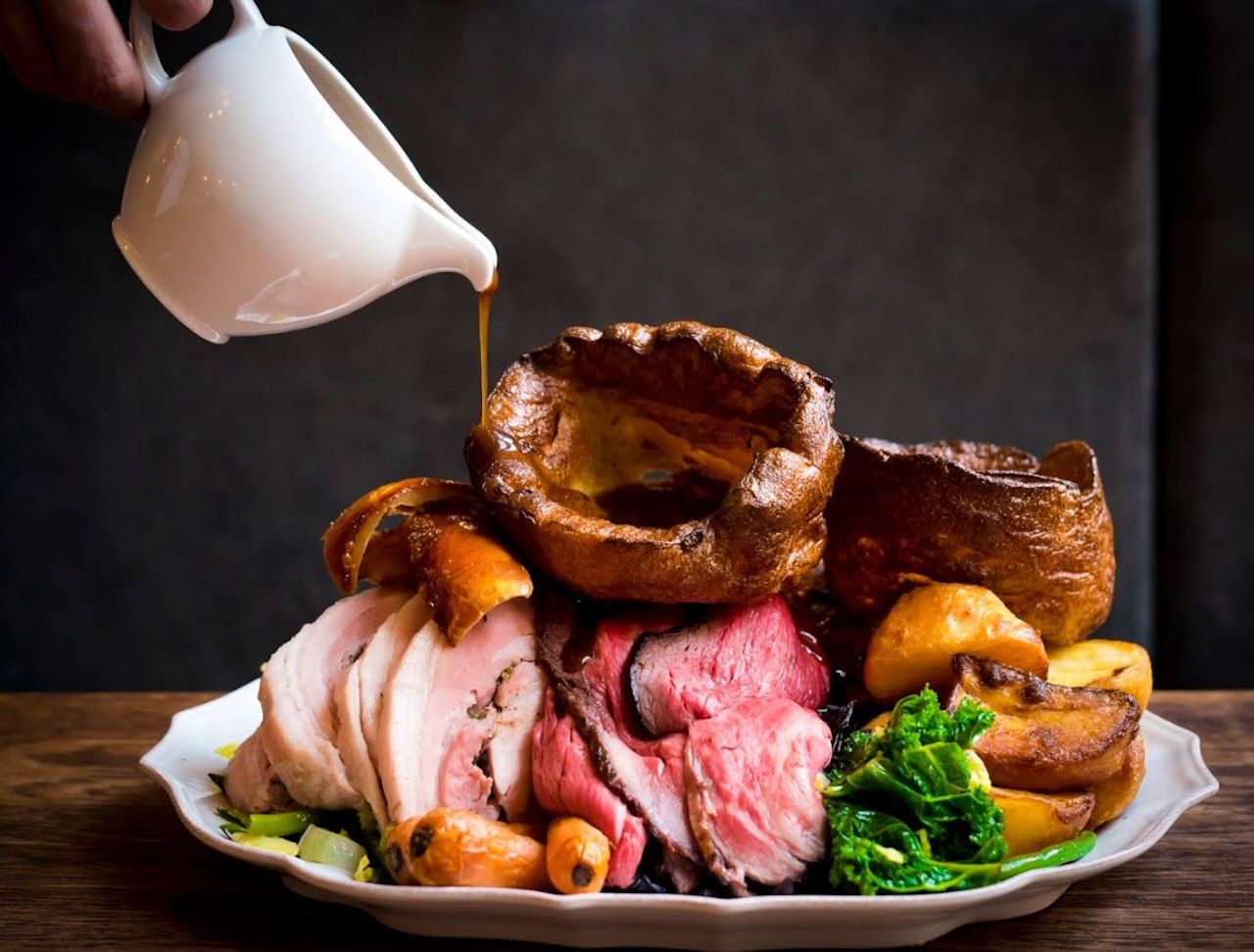 The Refuge $$ — Occupying several spaces within the overwhelmingly grand Principal Hotel, The Refuge juggles simple elegance with a colorfully creative menu. The food is a fusion of globally inspired small plates, from lamb and pomegranate flatbreads to Keralan curries. What’s especially attractive about the place, though, is the stylish balance between music, food, and decor — there’s really no place like it in town.

Mughli $$ — Central to Manchester’s famous “Curry Mile,” Mughli stands out both for its longevity and for its smart, modern take on chargrilled Indian grub. Many of the restaurants nearby are notable only for having a license that allows the serving of alcohol after the bars have closed, but forget those and find your way here for spiced meat and fish dishes fresh off the grill. 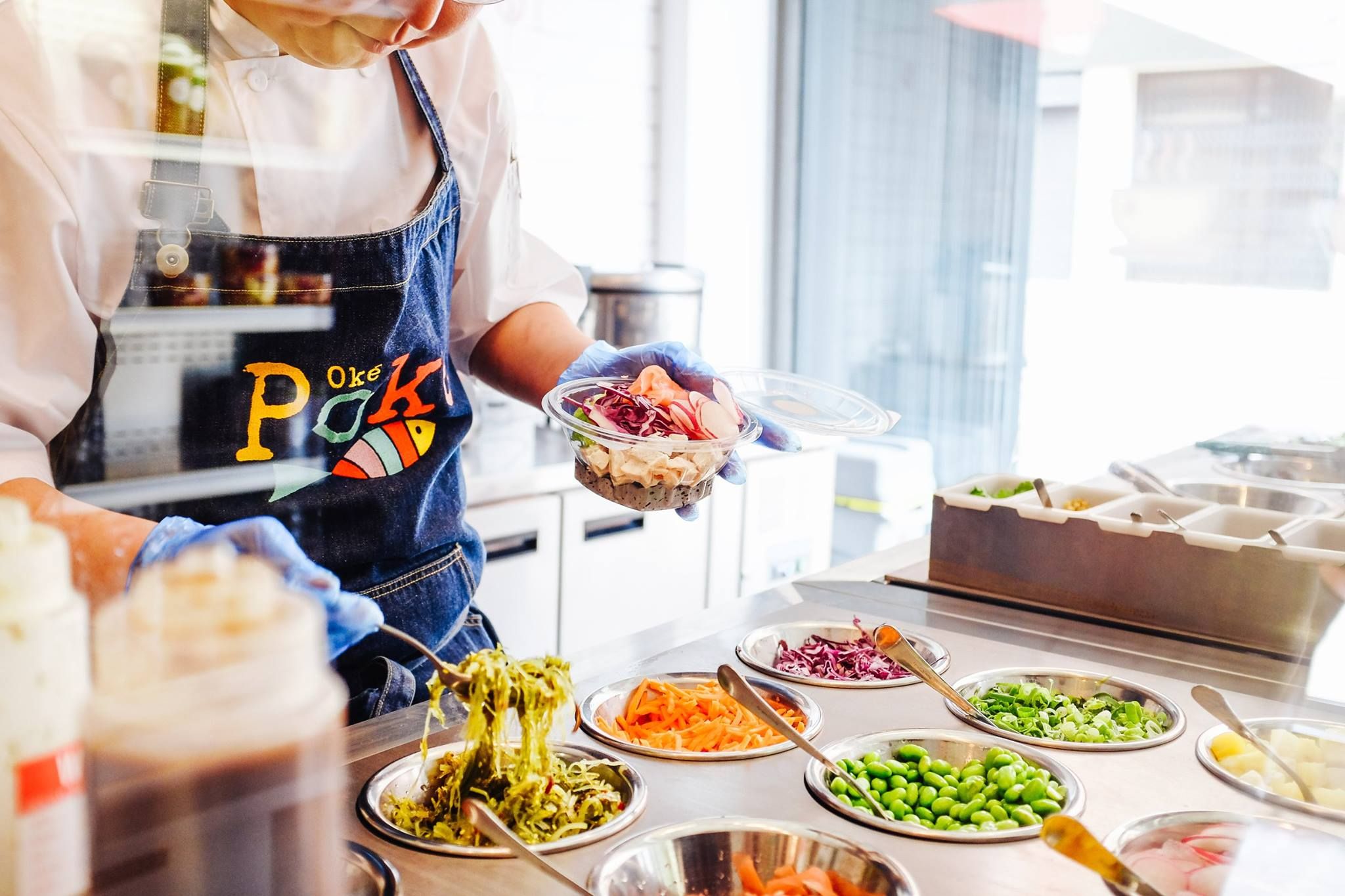 Oké Poké $ — Pacific Rim fusion food comes hearty and healthy at this bright Northern Quarter poke shop. You can build a bowl of grains, protein, and fresh salad, or you can go with the suggested Hawaiian mix of sticky rice, marinated tuna, and tropical fruits. It’s quick, cheap, and the “pokerito” (a sushi burrito) is as filling as anything in the area.

Evelyn’s Cafe Bar $$ — Whitewashed walls and abundant greenery dominate this oasis of healthy brunches and sophisticated global cooking. Arrive early for coffee and smoothie bowls, or head in at night for large plates that blend local produce with exotic spices. Or, time it just right and ask for a burger for breakfast. 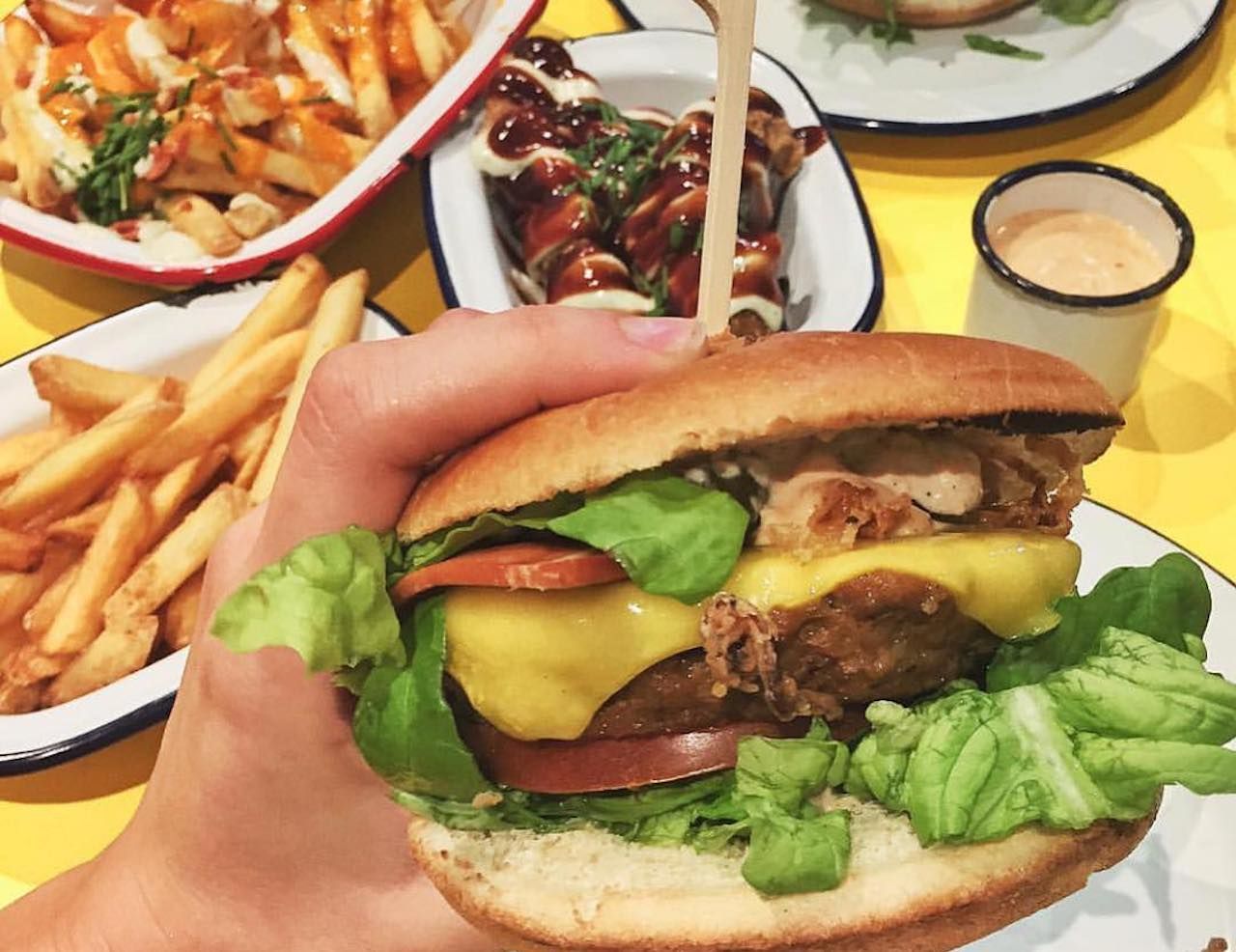 V-Rev $ — You shouldn’t have to miss out on the craze for American-style sloppy burgers with globs of cheese just because you’re vegan. That’s certainly the thought at Edge Street’s V-Revolution, anyway. There are plenty of joints slinging out nouveau junk food in Manchester, but only one that’s doing it with seitan and tofu. The best part is that V-Rev is doing it with all the taste and none of the heart disease. 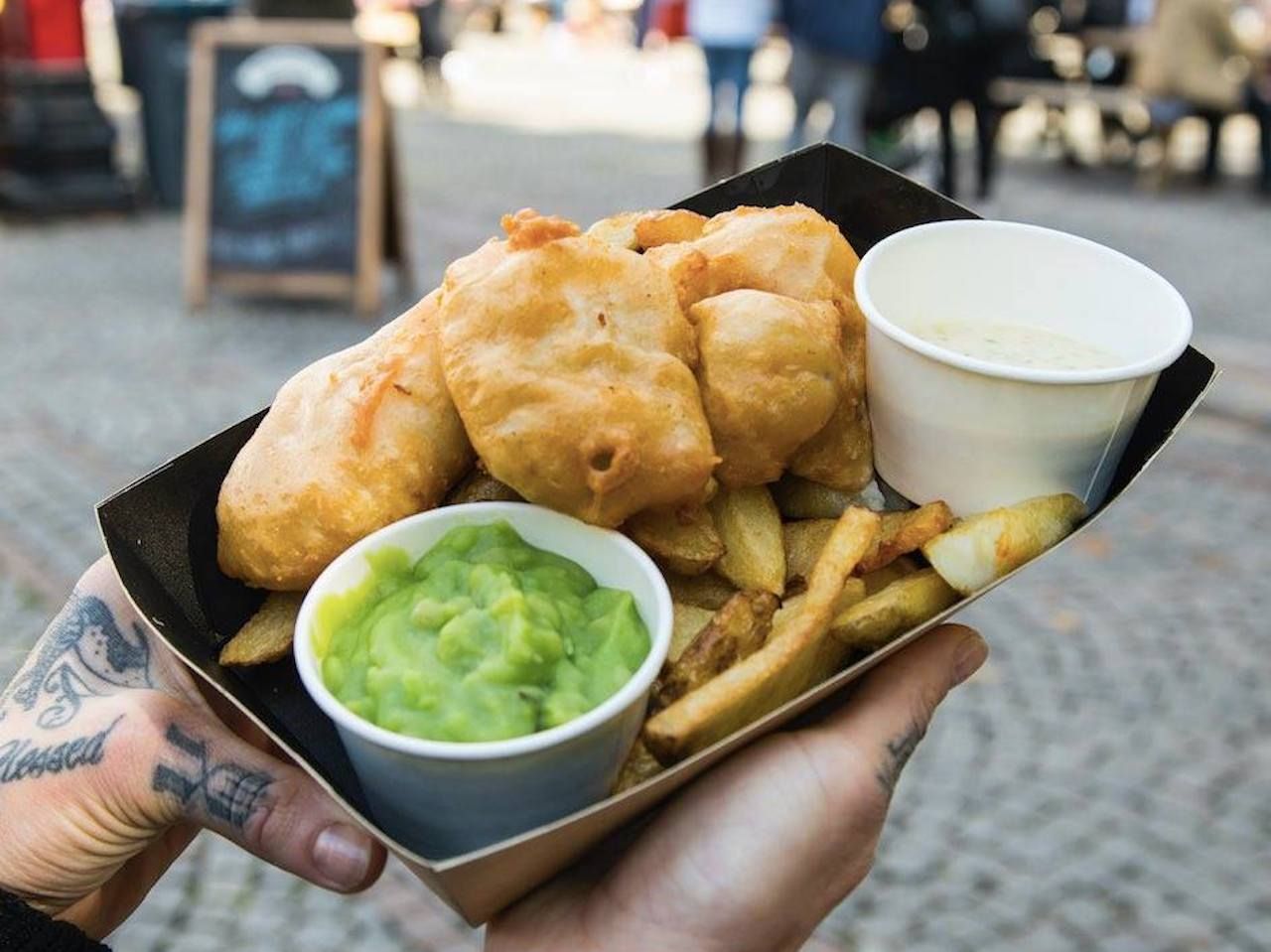 The Hip Hop Chip Shop $ — Turns out that fish and chips make perfect bedfellows with classic hip-hop. This is one of the most welcoming and easygoing venues in Ancoats. You can get takeaway from THHCP, but by far the best option is to take a chance on scoring one of the few seats to enjoy your fish, chips, and pea fritters to a background of golden age rap music.

Elnecot $$ — In this post-industrial room of uncovered ventilation shafts and breezeblock walls, you’ll find some of the most original small plates of food around. Elnecot fuses a European approach to casual dining with a British love for traditional staples like ox cheek braised in Manchester ale, or fatty pig’s head shaped into crispy croquettes. Elnecot also does a mean Sunday lunch. 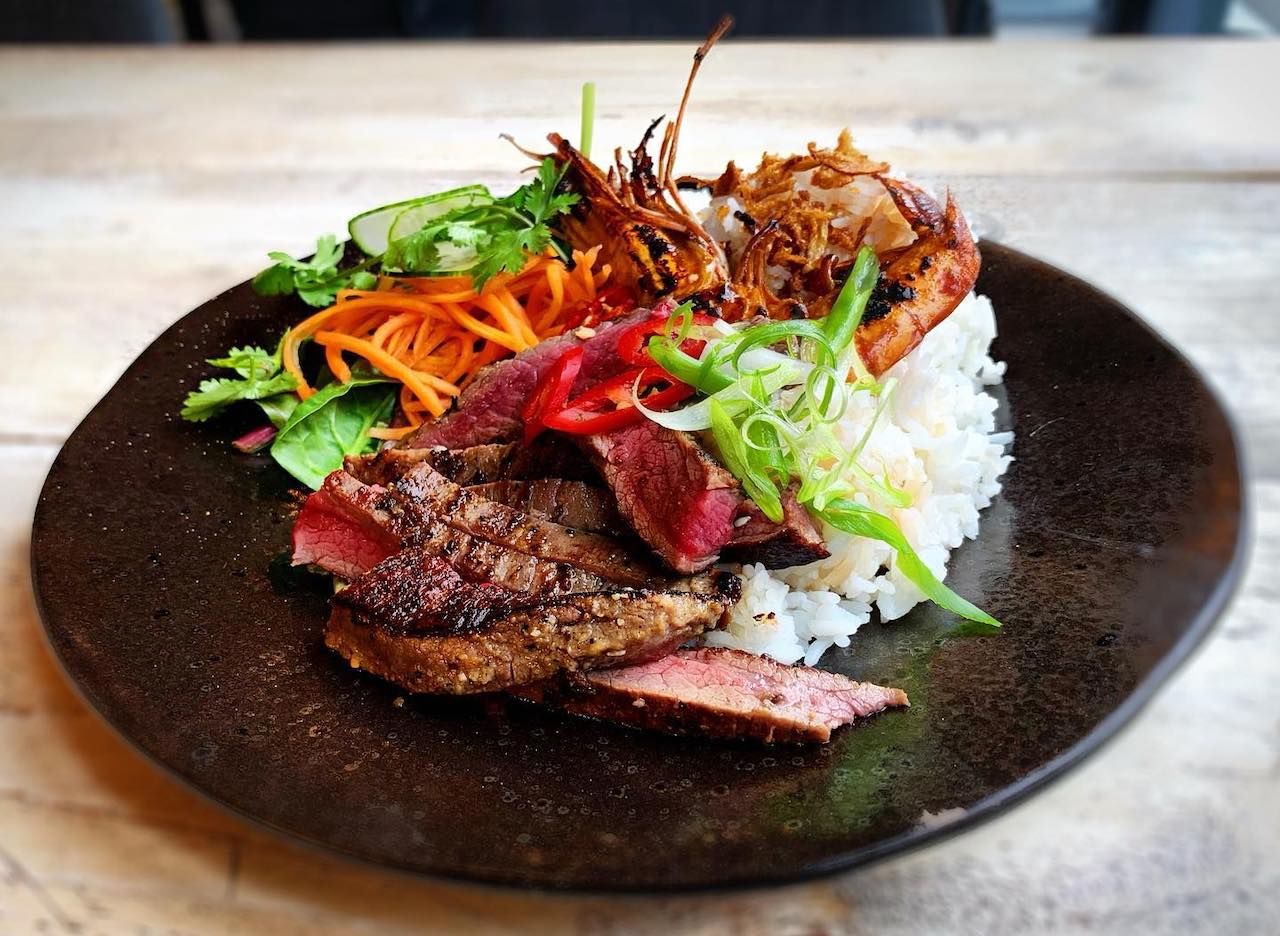 Viet Shack $ — If you’re yearning to find the freshest Vietnamese cuisine in a fun setting, then hit up Viet Shack for summer rolls, salads, and Saturday night crowds. Slightly cheesy ‘90s pop music blasts out underneath a canopy of tropical parasols, so it’s probably better for seeing your buddies than your beloved. If you’re after something more hearty than small appetizers, there are Asian-influenced burgers on the open chargrill on the menu.

Rudy’s $ — For less than $10, Rudy’s in Ancoats fires out the best Neapolitan-style pizzas in the city. It’s a modern space with no pretension and no reservations, so getting a table can be difficult and queues are common. The good news is that it takes less than two minutes to load up and crank out the fire-charred pizzas, so table turnaround is quick. It’s authentic southern Italian flavors only, pineapples will be confiscated at the door. 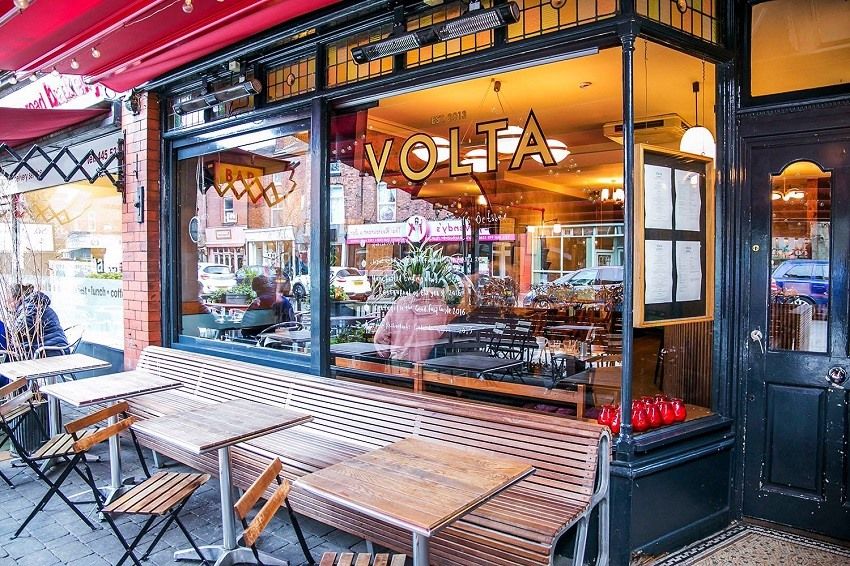 Volta $$ — This stylish, suburban bar and kitchen serves up globetrotting dishes rich with the spices of Asia and the skilled fire cooking of the Middle East. The outdoor terrace is packed with drinkers and diners in the summer, but it’s inside where the best tables are found. There’s no other dining room that captures such an authentically 1950s diner ambiance without relying on cheesy retro shortcuts — there are no jukeboxes or waitresses on roller skates, just sparkling chrome and bright formica tabletops.