One of the best things about Vancouver is the confluence of cityscape and landscape. You never feel overwhelmed by the big city and you never have to stray far from cocktails, craft beer, and good food. You could come to Vancouver for no other reason but to immerse yourself in nature and peaceful parks, including a surprisingly great set of urban beaches. Vancouver prides itself on its green spaces, and all of Vancouver’s main parks and recreational areas are accessible on public transportation. 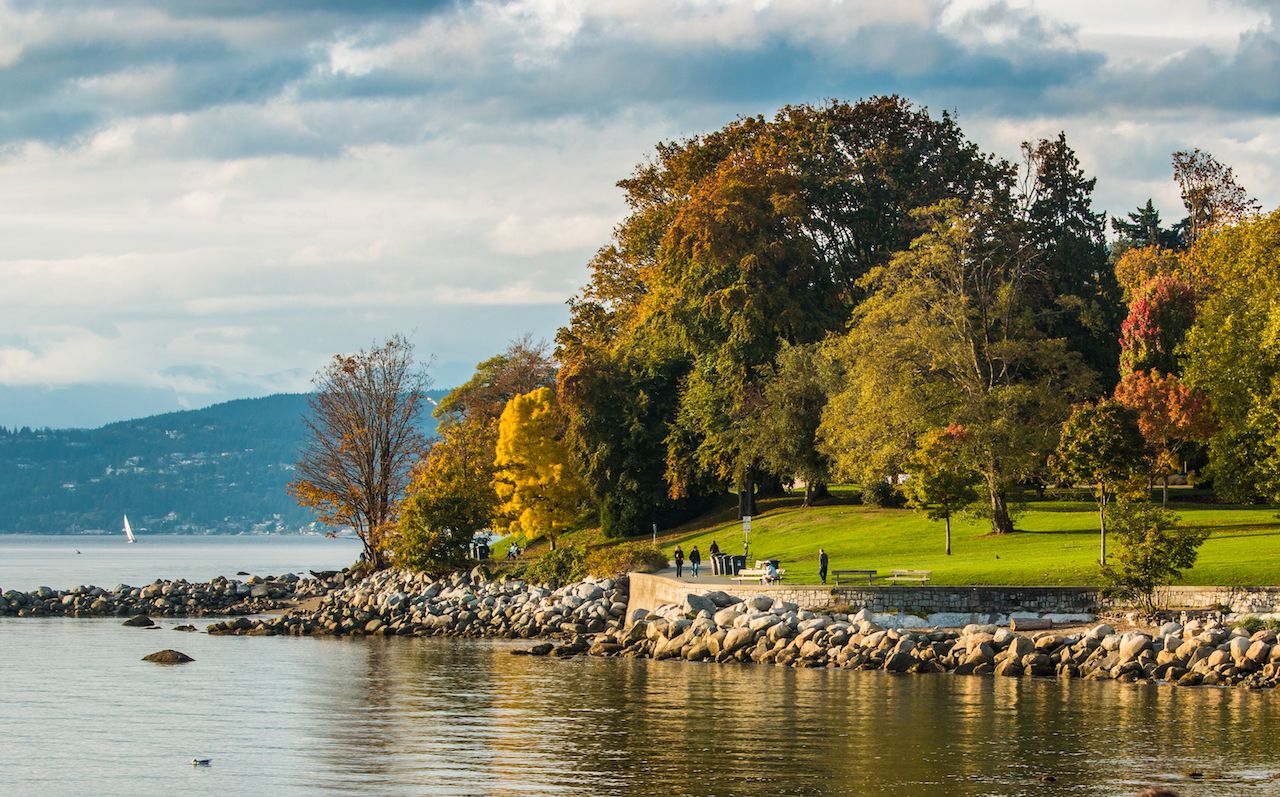 Stanley Park — If you asked someone how to spend a quintessential day in Vancouver, most people would tell you to head to Stanley Park. Stanley Park, a wooded island on the north end of Vancouver, is like a city unto itself. It’s hard to believe that in one park you have two lakes, beaches, an aquarium, a pitch-and-putt golf course, a public pool, tennis courts, a rose garden, a tea house, a rowing club, three restaurants, and lots and lots of geese.

In summer, scores of sunbathers share space on the beaches in the park, but it somehow always manages to stay peaceful wherever you go. The six-mile seawall loop around the island of Stanley Park is a popular walking and running trail, where evocative shorelines blend seamlessly with the skyline of the city beyond. Miles of trails cut through the park, passing forests of fir, cedar, and hemlock. Although Highway 99 to Whistler cuts through the island park, you would never know because it’s silenced by the trees. 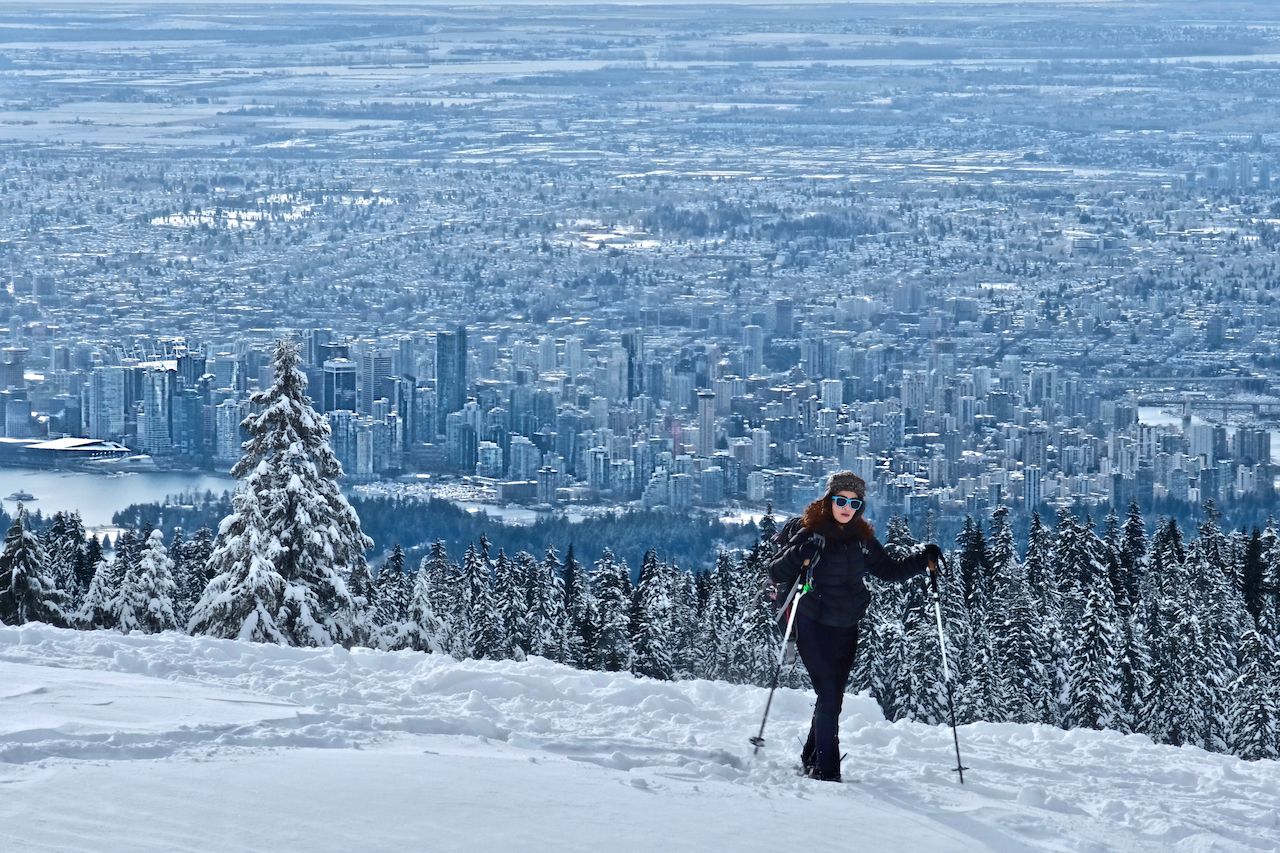 Once you arrive at the base, you can take the cable car or, in summer, you can hike up on the famously steep Grouse Grind trail. After hiking the Grind, you can grab a beer at the top and take the cable car down. You can’t ask for much more on a summer day. In winter, Grouse Mountain has four lifts, multiple runs ranging from easy blues to double-black diamonds, and a badass terrain park. Grouse is also open for night skiing until 10:00 PM, making it a favored post-work excursion for the hardcore skiers among us.

While you can night-ski at Grouse, Cypress Mountain is the largest ski resort of the three mountains and was the site for some major events — like the snowboarding halfpipe and ski cross — during the 2010 Vancouver Games. It has a summer mountain bike park, and miles of cross-country and trails, depending on the time of year. The views of Vancouver from Cypress are unparalleled.

The third mountain is Mount Seymour, which lies due east of Grouse, and is a good option for teens and snowboarders, as it has four terrain parks. It also has a solid network of snowshoeing trails and is the site of popular summer camps. 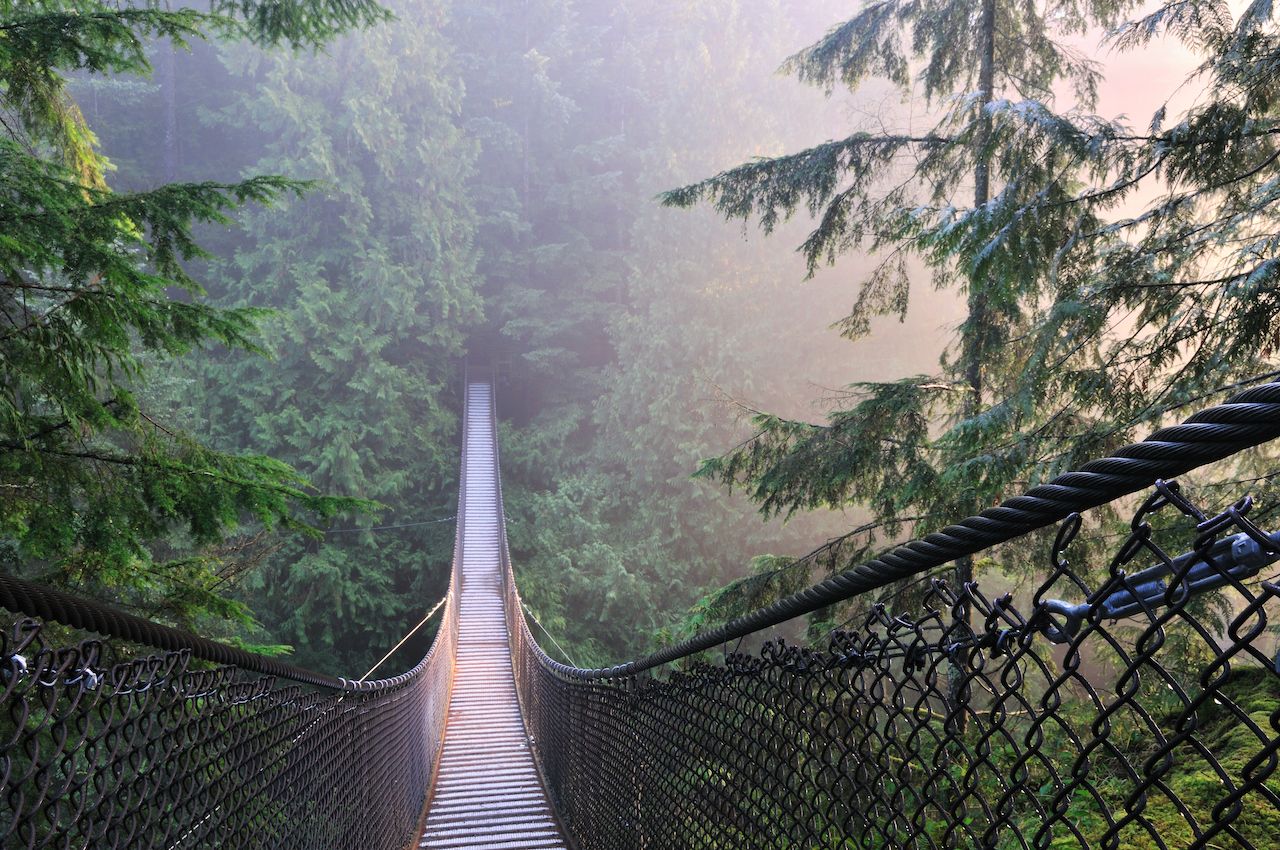 Lynn Canyon Park’s most exciting feature is a walking suspension bridge that stretches 165 feet off the ground across a stunning canyon. The park is also a great place for summertime hikes passing waterfalls and lovely natural pools. Challenging but fun hiking trails can even lead you all the way to Grouse Mountain. That would take you up to six hours, but you could bus back to town afterward. 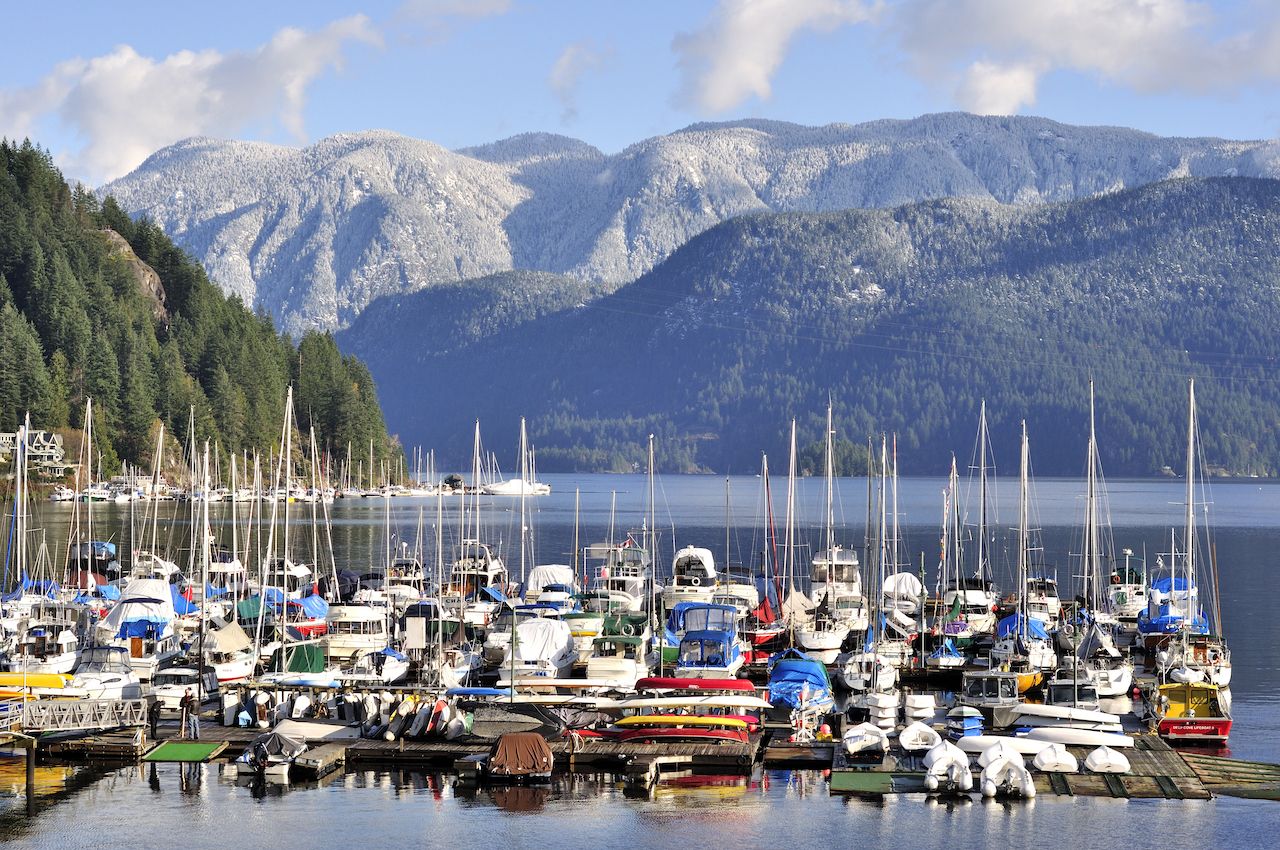 Deep Cove — Deep Cove, a tiny waterside community at the far end of North Vancouver, is just an hour from downtown by bus, and just over 30 minutes by private car. When you arrive, it feels like you’ve landed in a small town miles away from city life. Deep Cove, or “The Cove,” is a crescent cut into the soaring mountainside, with a petite marina and deep blue waters. You could come just to admire its scenery, or to stand-up paddle or kayak. 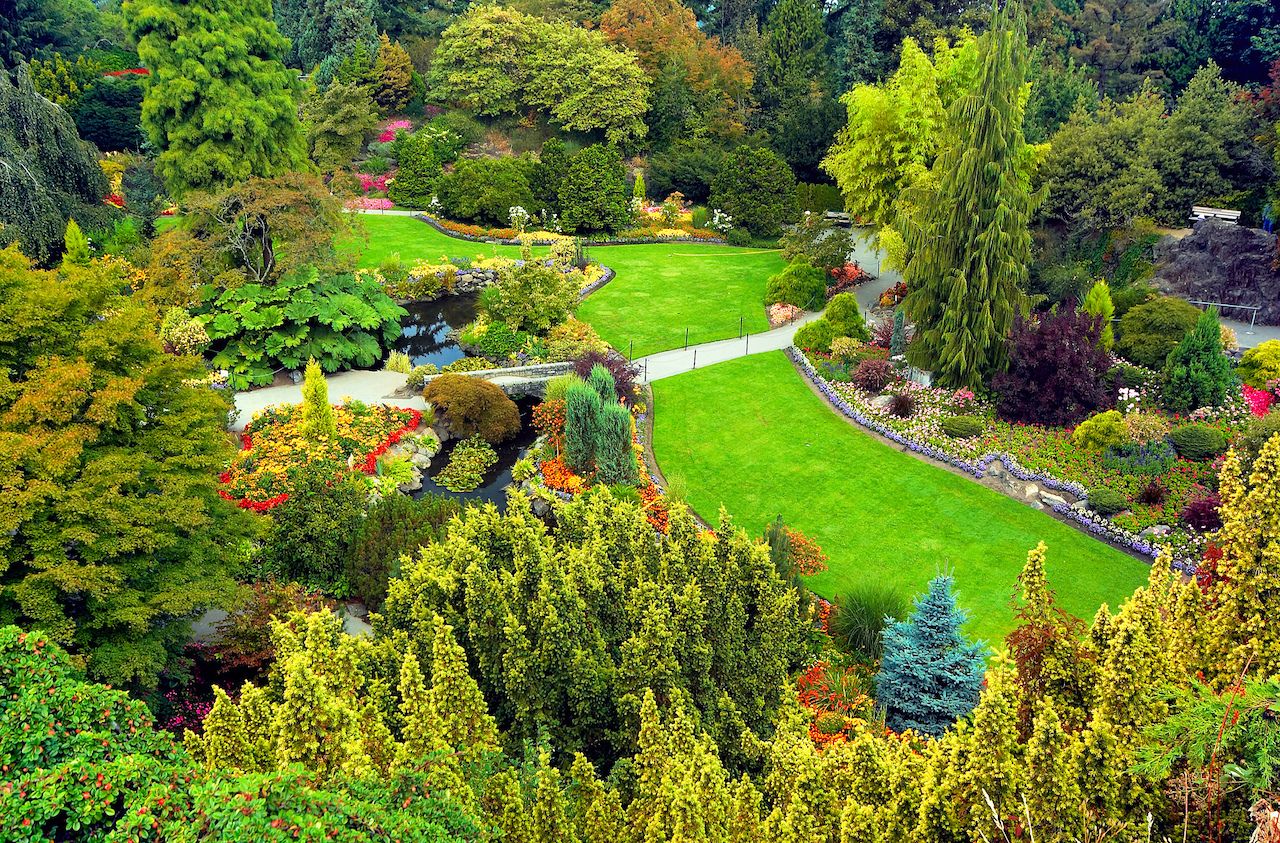 Queen Elizabeth Park — Queen Elizabeth Park lies on a rise in the middle of Vancouver, with incredible views of the skyscrapers of downtown Vancouver. You could come to this park for the views, but you’d soon be awed by the trees and flowers in the thoughtfully designed park itself. The colorful foliage looks stunning at almost every time of year. When it is blanketed in snow, though, you can head into the Bloedel Conservatory, a domed glass structure that marks the center of the park. It houses not only over 500 plants and flowers, but over a hundred tropical birds that fly freely in the warm, lush interior. After enjoying the greenery, you can also play disc golf, tennis, or squash at the park. 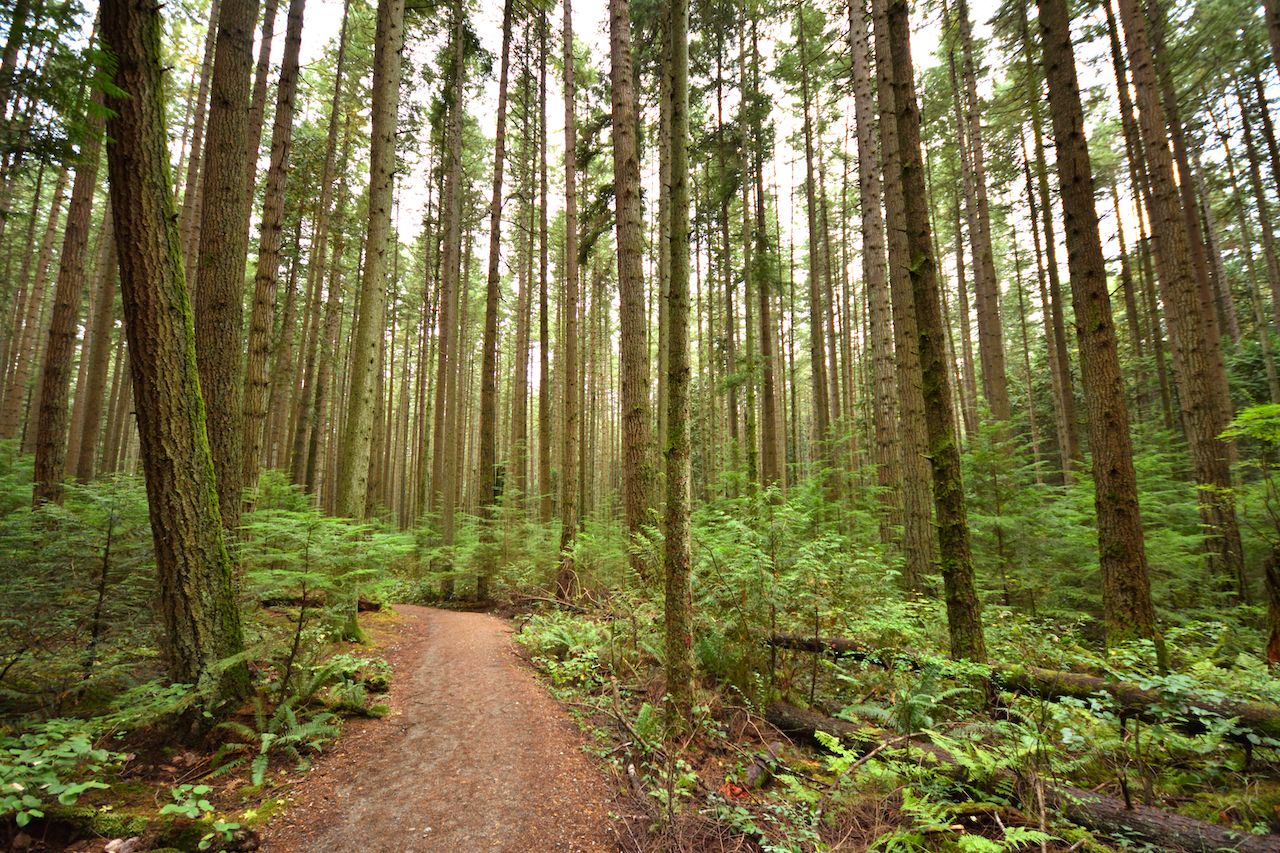 Pacific Spirit Regional Park — Pacific Spirit Regional Park takes up over 2,000 acres of the northwest corner of Vancouver, the tip of which is occupied by the campus of the very fortunately located University of British Columbia (UBC). The park has 45 miles of trails, two-thirds of which are also open to cycling and horseback riding. The park was created as a natural forest preserve, and is rich with cedar, hemlock, spruce, fir, and maple trees, along with plenty of ferns and mosses. From the cliffs, you can look out over the waters of the Strait of Georgia to Vancouver Island in the distance. 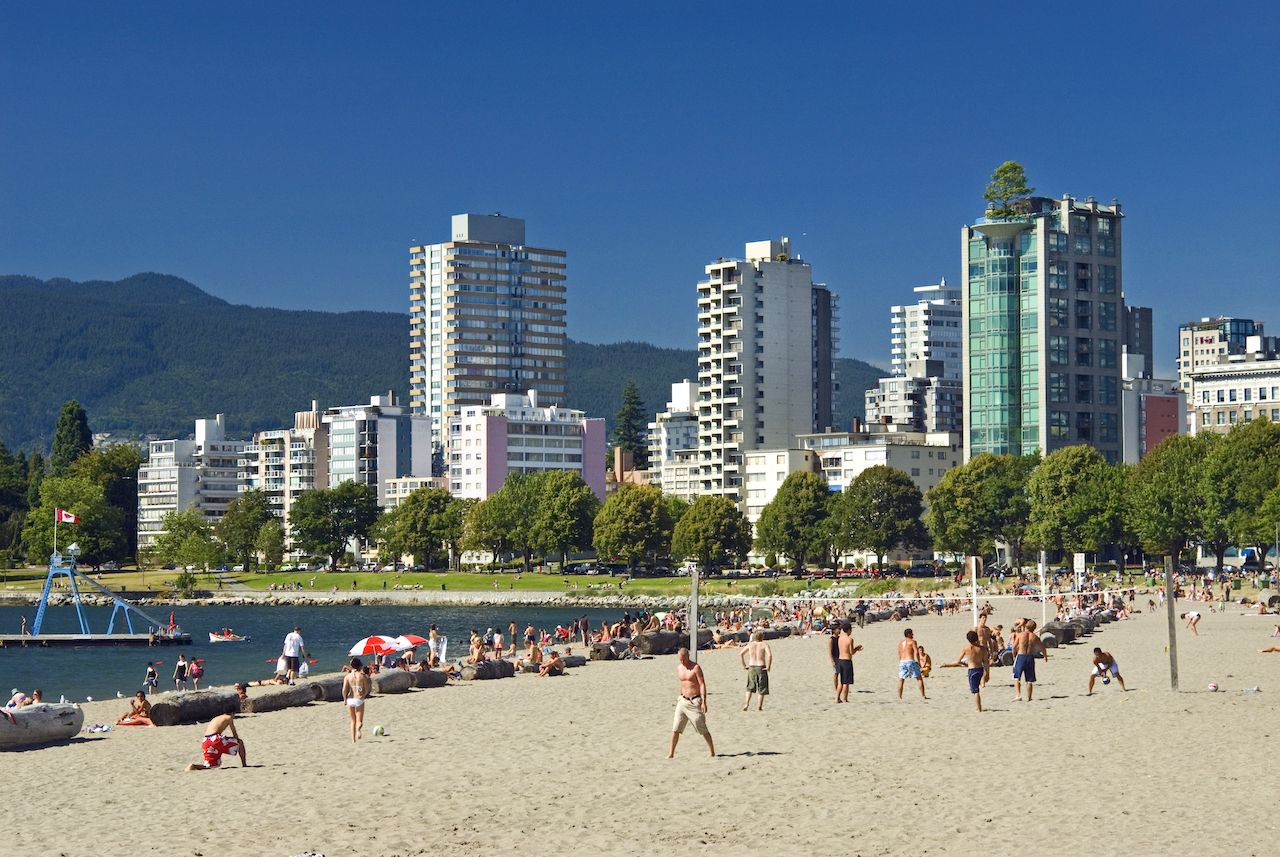 Beaches — Vancouver has about a dozen big beaches that you can visit on foot, by bicycle, or via public transportation. All are worth checking out, but a few are truly outstanding if you come to Vancouver in the warmer months.

English Bay Beach hugs the coastline of Vancouver’s densest urban neighborhood, the West End. The sandy beach cove is backed by an elegant lawn and, behind that, elegant high-rise apartments. It’s packed in the summer, and you may see a volleyball net or two hung up high. While it’s liveliest in the warmer months, all year-round you will find people lounging around, meditating, and just feeling lucky to be there. The north end of the beach marks the beginning of Stanley Park.

Skip the mobs at Kitsilano Beach and walk or cycle farther west along the Vancouver seawall until you reach Jericho Beach or Spanish Banks Beach, which have sandy beaches with views of the Vancouver skyline, oodles of space for picnics, and is an ideal spot for windsurfing. Spanish Banks Beach is at the north end of the wooded Pacific Spirit Regional Park, so it feels especially peaceful.

If the tide permits it, you can technically walk from Spanish Banks to Wreck Beach. Most likely, though, you’ll have to drive through UBC’s campus, park, and walk down the steep trails. Wreck Beach is as much a tie-dyed, drum-playing subculture as an urban beach all summer long. Check it out if you feel like having a clothing-optional day in the sun.