Since it hosted the 1986 World Exposition (known as Expo 86), Vancouver has become a Pacific Rim metropolis. Almost half of all its residents are foreign-born, and consequently, the art and culture in Vancouver showcases the city’s diversity and connectivity with the rest of the world. Art galleries continue to spring up in unlikely places, but they tend to be scattered about town instead of concentrated into one neighborhood. Currently, Mount Pleasant has the largest concentration of murals in the city. Small and pop-up galleries can be found in the Downtown Eastside, Chinatown, and Mount Pleasant. The new campus of the Emily Carr University of Art & Design and the Centre for Digital Media are making Great Northern Way home for the next generation of artists. Most importantly, Vancouver’s economy has been bolstered by a thriving film production industry. 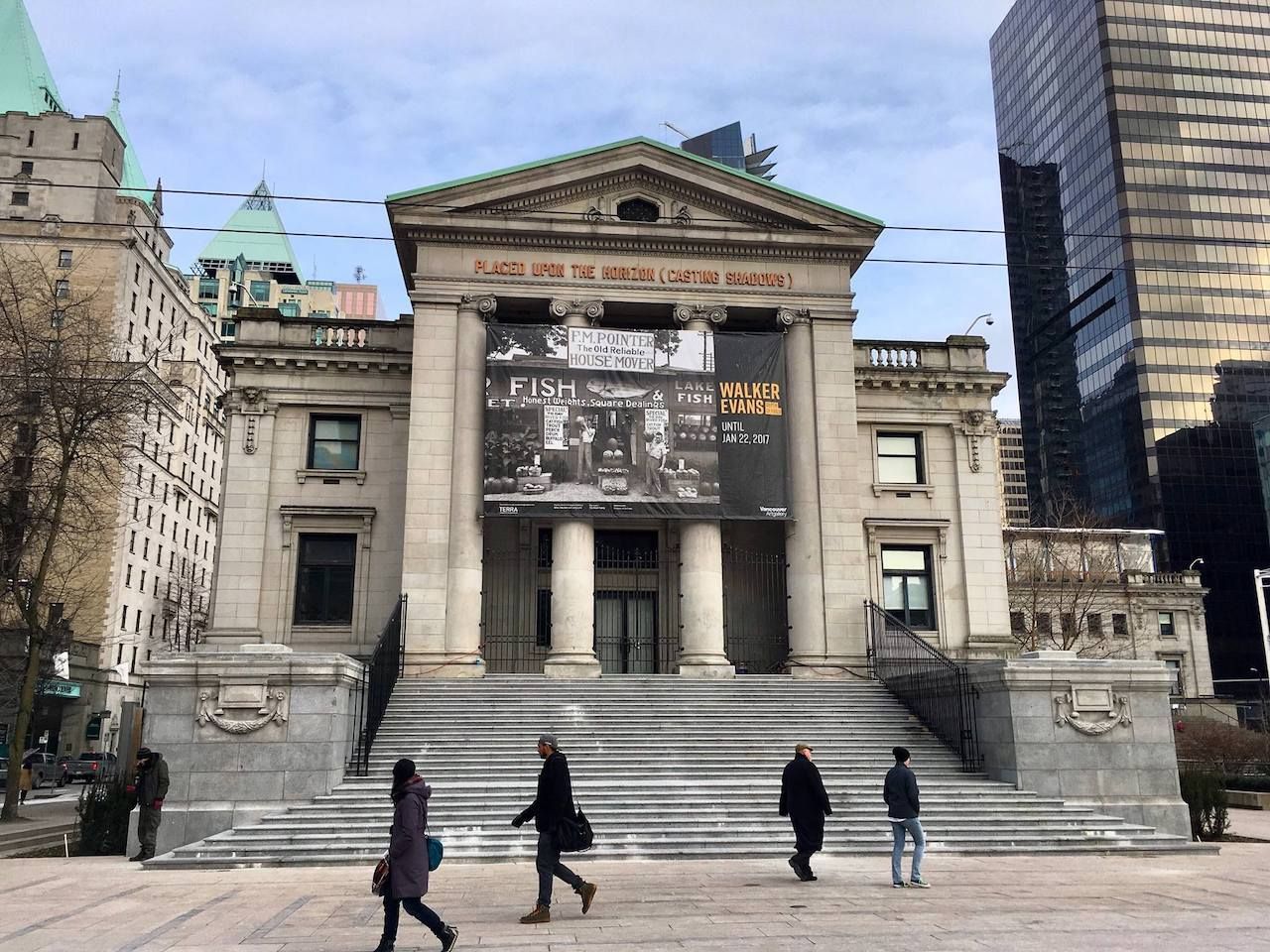 Vancouver Art Gallery — The de facto hub of art and culture in Vancouver, the Vancouver Art Gallery (VAG) is also the city’s gathering place for political protests, rallies, and small-scale demonstrations. Art and politics do often go hand-in-hand, but at the VAG it makes even more sense given the building’s history. The collection has for decades been housed in the old city courthouse. Built in 1905, the neoclassical building straddles the two main thoroughfares of downtown, with public spaces on each side. Feel free to linger with the locals on the steps beneath the Ionic columns and watch the world go by.

Slowly underway is a Herzog & de Meuron structure located a few blocks away near the Queen Elizabeth Theatre, one of the city’s top concert venues. Years from now, the new building will house the VAG permanent collection. Highlights include the Group of Seven in the permanent collection, while rotating exhibits at the VAG span space, time, and genre including multimedia FUSE events. 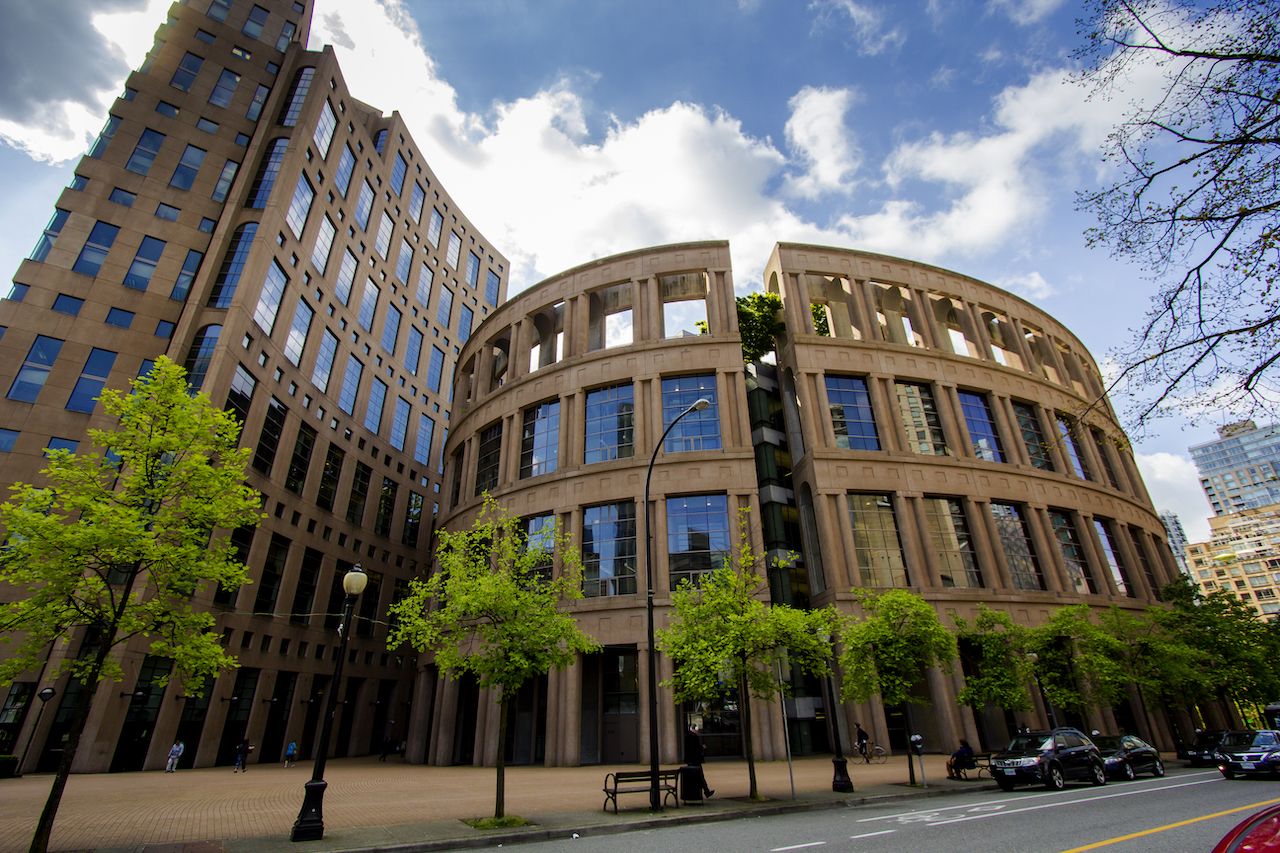 Vancouver Public Library — The central branch of the library looks like a modern version of the Roman Colosseum, so it’d be a shame to not check it out. Inside and out, you will find lectures and seminars, many of which are free and open to the public. The rooftop has a garden and a cafe. 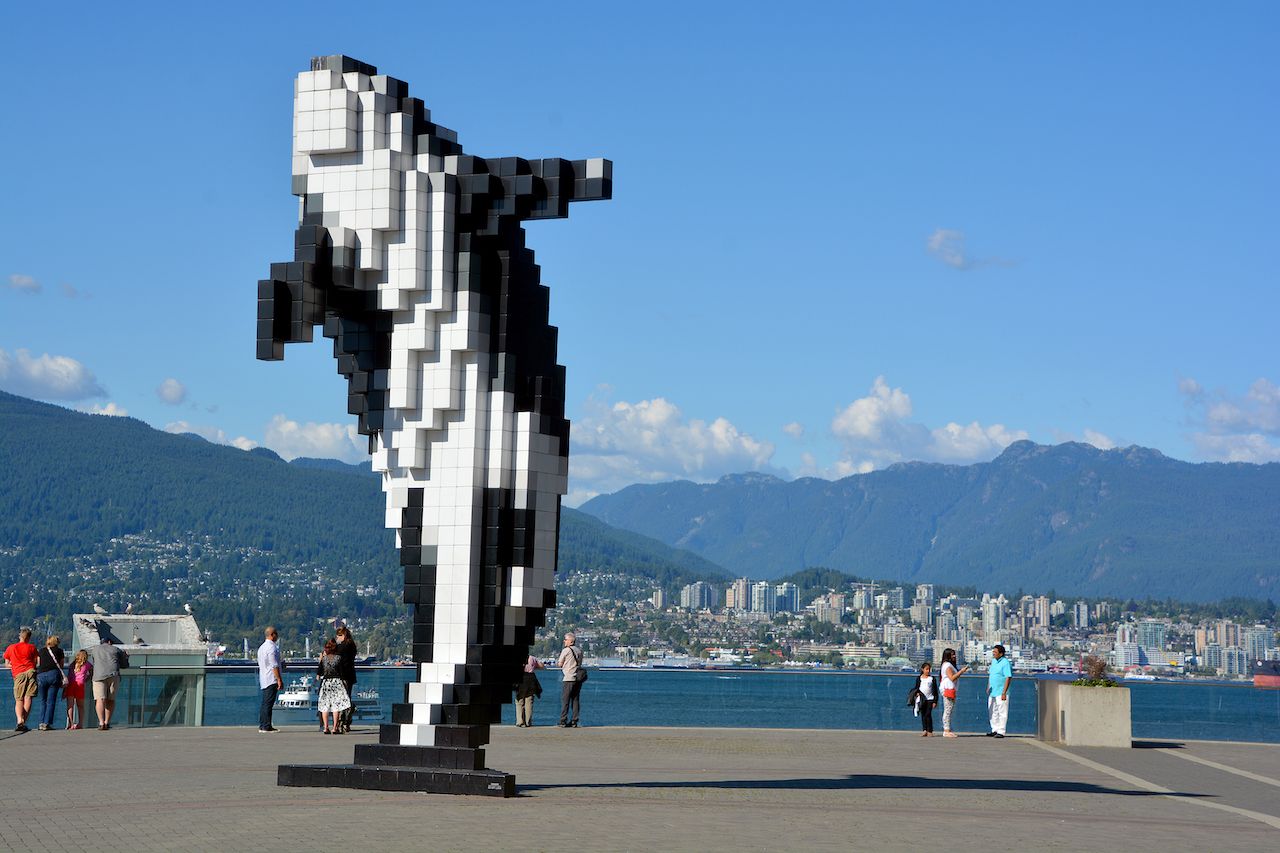 Canada Place and the Vancouver Convention Center — With its white sails jutting out into the Burrard Inlet, the city’s main architectural icon, Canada Place, was designed to evoke the sea on which it stands. Its imagery is not arbitrary, either, as Canada Place is where the cruise ships start sailing to Alaska from May to September. Canada Place occasionally hosts temporary art exhibits.

Across from Canada Place is the Vancouver Convention Center. Walk around the green-roof building to check out the cool public art such as The Drop and the Digital Orca sculptures, both quintessential Vancouver pieces. Don’t miss the Olympic Cauldron built permanently nearby for the 2010 Winter Games. The 18-foot and internally illuminated rotating globe in the lobby of the convention center is also worth admiring. 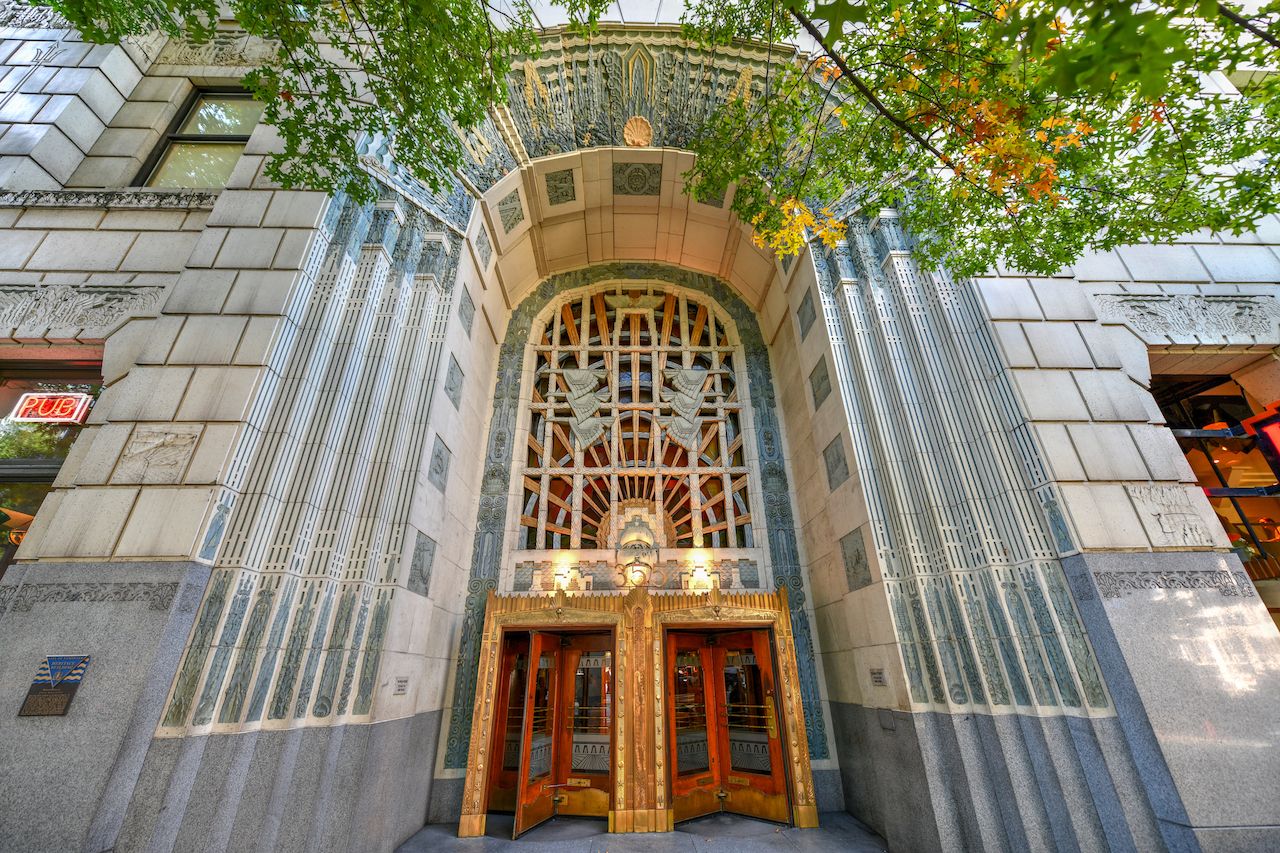 The Marine Building — Vancouver has several beautiful Art Deco pieces, but if you only have time to visit one, it would be the Marine Building. Exterior reliefs are carved into terra cotta, with images of marine life like crabs and seahorses. Go inside and gawk at the architectural details on the walls, the windows, and even the elevators. 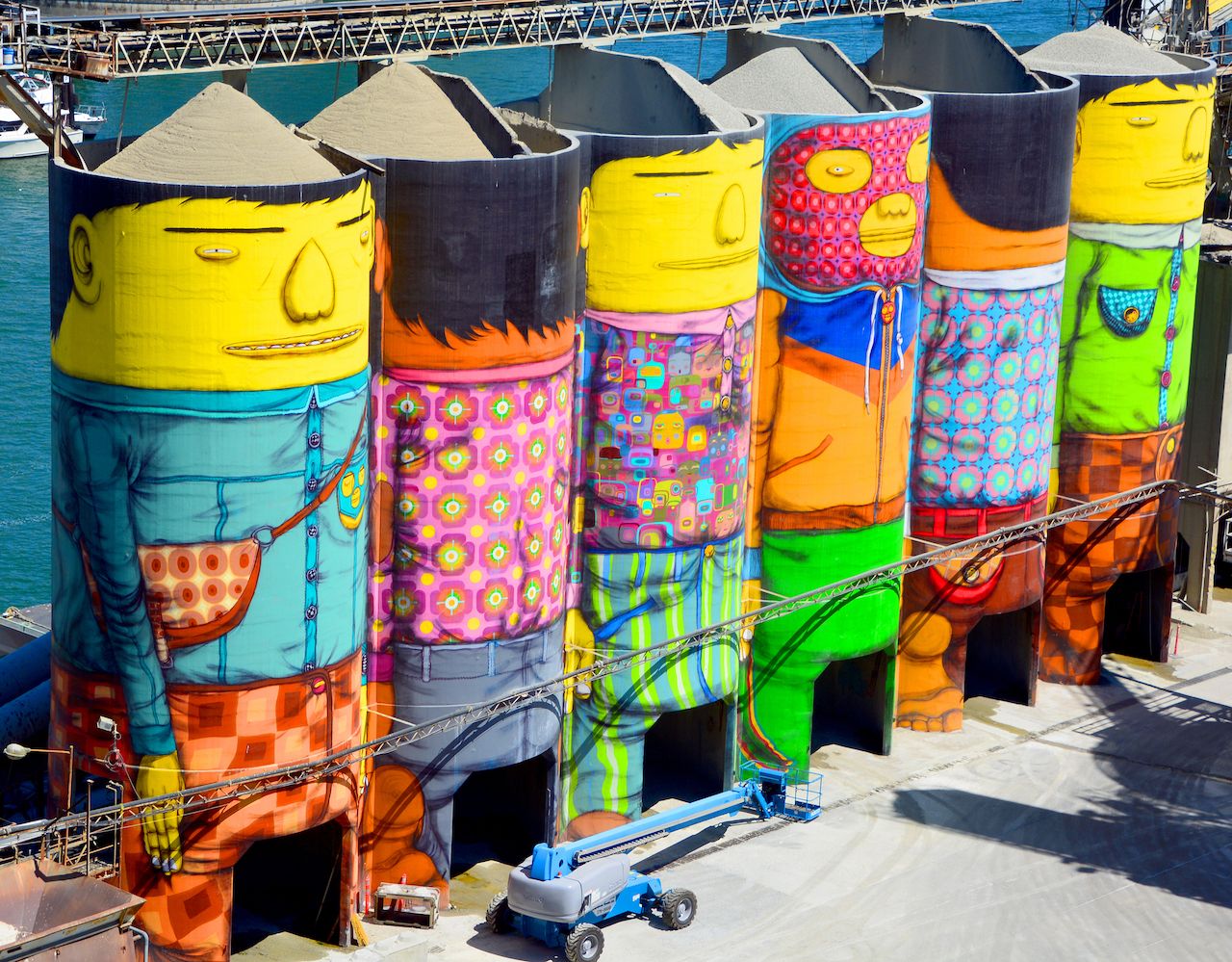 Granville Island — Although summer is when it really shines, Granville Island is a center of art and culture in Vancouver throughout the year. The Emily Carr University of Art & Design recently moved from Granville Island to its new home on Great Northern Way, but it has left in its wake small workshops and studios where you can occasionally catch glimpses of artists at work. Best of all, you can visit what could be the continent’s sexiest cement factory. Go to Ocean Concrete on Granville Island and you will see its six working silos covered in the distinctive mural entitled “Giants,” by Brazilian artists OSGEMEOS.

During the summer months, not a weekend goes by without something going on at Granville Island. The Vancouver Jazz Festival and the Fringe Festival are just a few of the big events here. 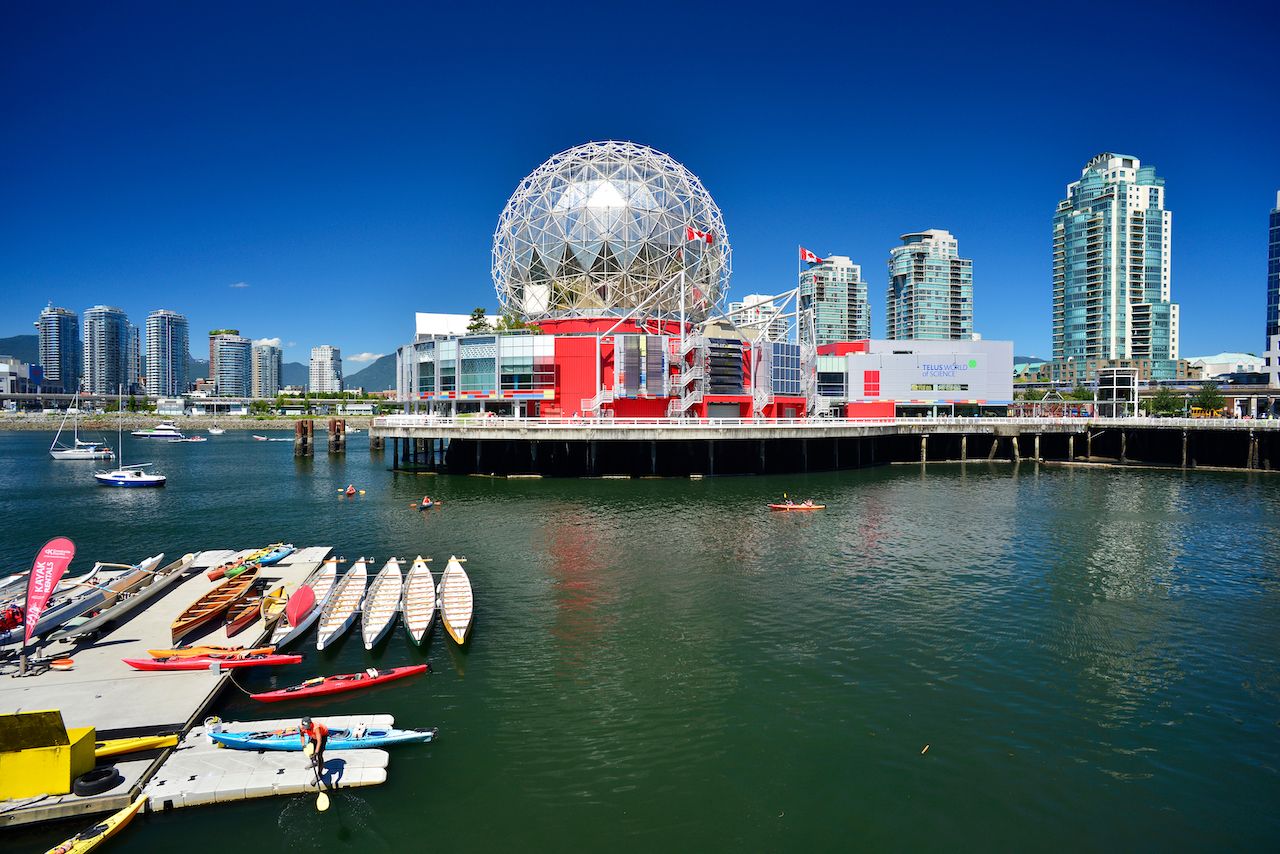 Science World — Not just for kids (but, seriously, it’s one of the best spots in the city for kids), Science World is a playful geodesic dome that many refer to as a giant golf ball. Without needing to step foot inside, you can peruse the grounds, with its ample park space and interpretive center offering fine views of False Creek. Nearby you can rent kayaks for a quick paddle in the heart of the city. Throughout the year, adult-only events are held at night and you can catch Omnimax films. 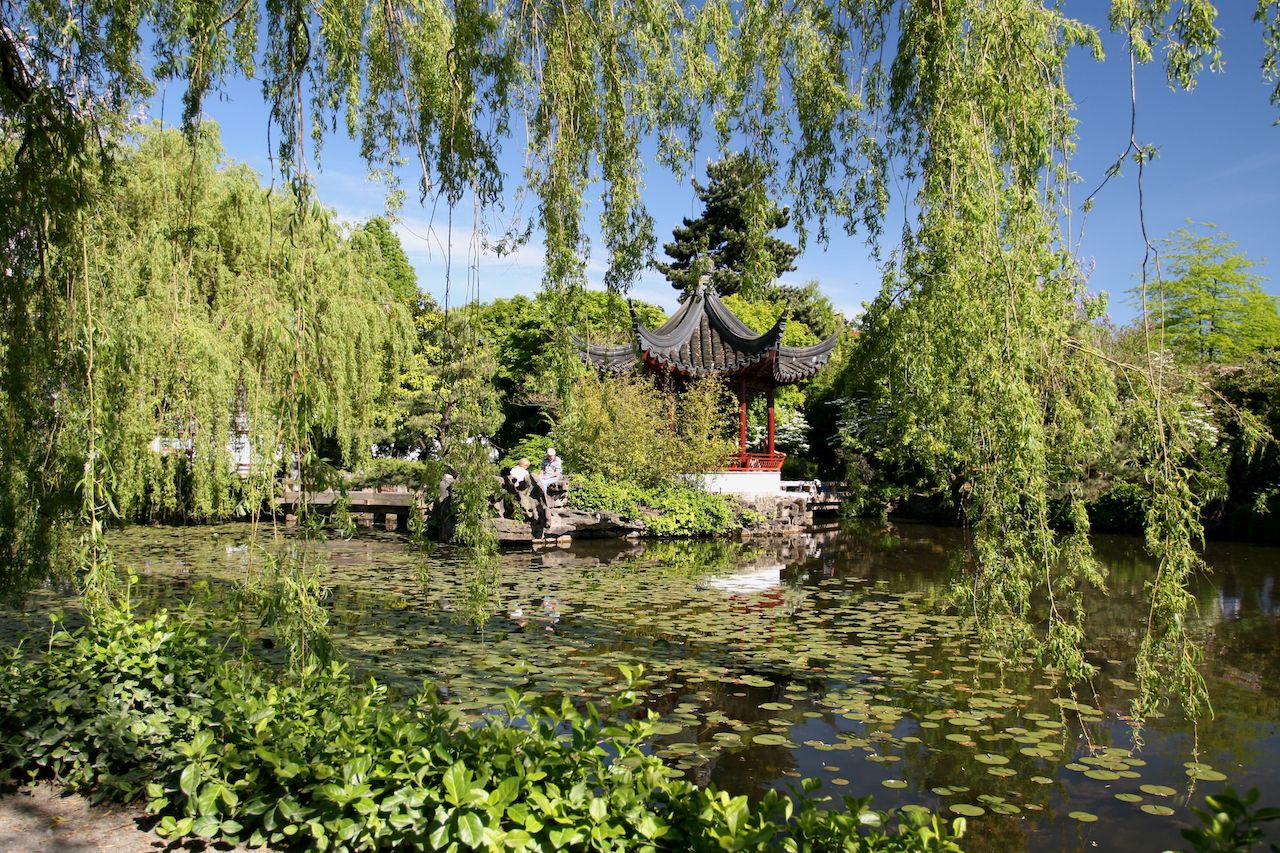 Sun Yat-Sen and the Chinatown Gate — The only real Chinese garden in the city of Vancouver, Sun Yat-Sen is a perfect place to find peace and also learn about the roots of the city’s Chinese community. Walking a few blocks from here, you’ll pass by many old two-story Chinese stores and a classic Chinatown gate. 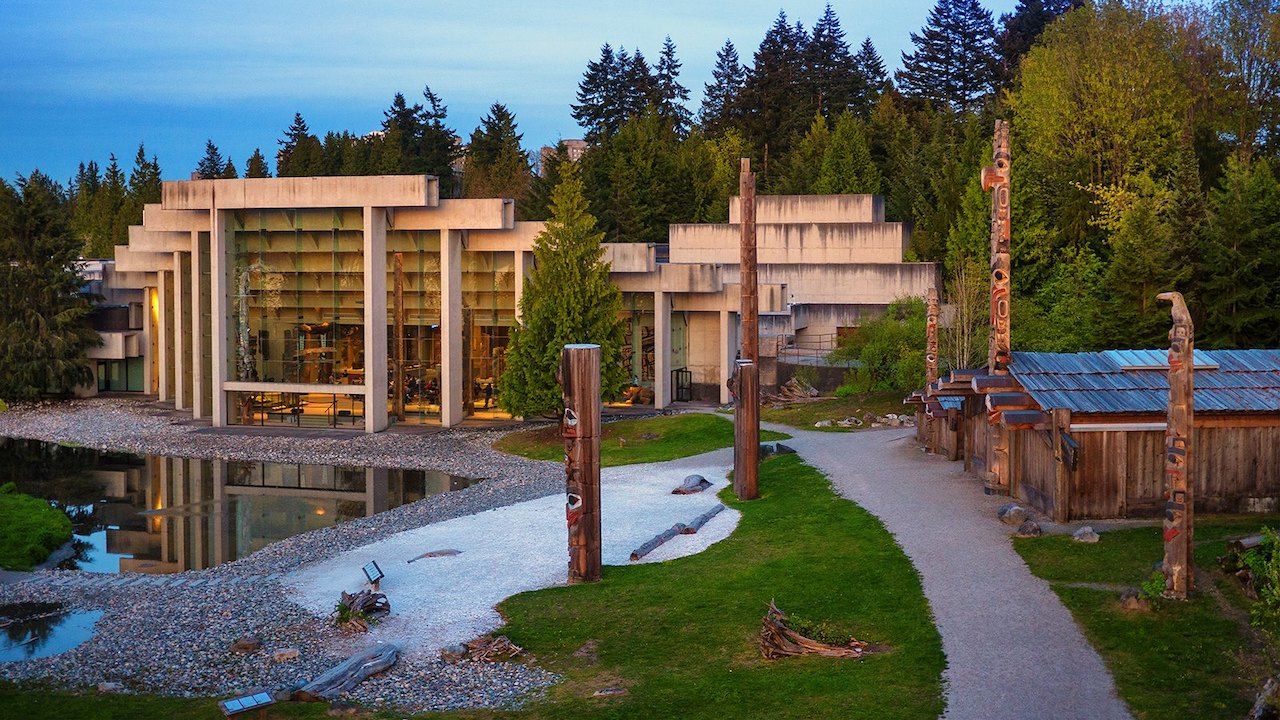 Museum of Anthropology and Wreck Beach at UBC — As far as it is from downtown (about 25 minutes on the #4 bus), the University of British Columbia (UBC) does have very cool things to offer visitors, including the Museum of Anthropology (MOA). The MOA houses ethnographic objects including carvings, tools, ceremonial masks, and the like from the South Pacific, Asia, Africa, Europe, and the Americas with a focus on the First Nations peoples and other cultural communities of British Columbia. You can fish through the archived collections, hidden in drawers but open to the public, but the most remarkable feature of the museum is Bill Reid’s “The Raven and the First Men.” The MOA also displays some totem poles out of doors, where you can also enjoy the view north toward Stanley Park, downtown, and the mountains. Nearby is one of Vancouver’s favorite subculture scenes: clothing-optional, party-friendly Wreck Beach. 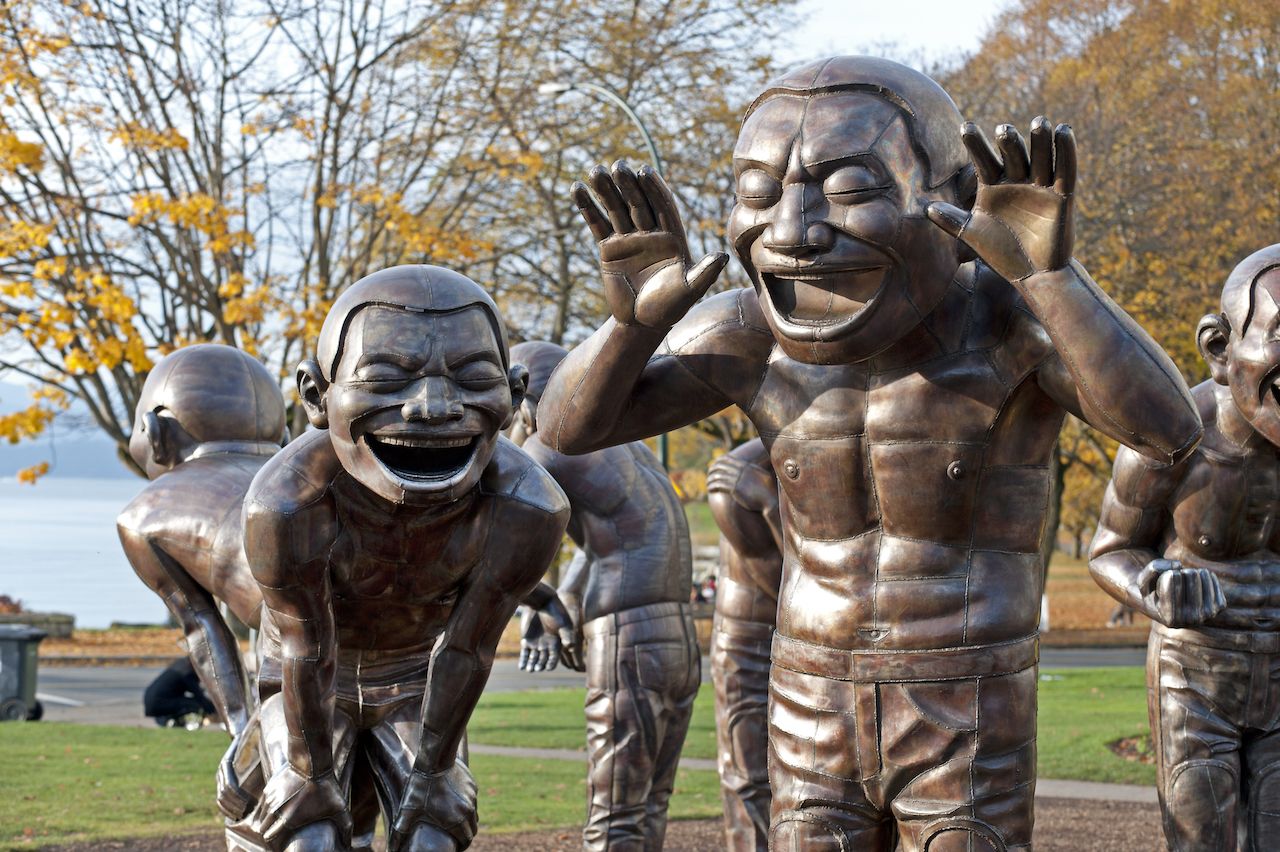 Stanley Park — Not only is Stanley Park the pride and joy of the city, it also embodies the marriage between wilderness and humanity. Here you can see permanent public art including “Girl in a Wetsuit” and the whimsical set of larger-than-life bronzes called “A-maze-ing Laughter” at English Bay. The popular Stanley Park totem poles include several original Coast Salish totem poles from other parts of British Columbia. 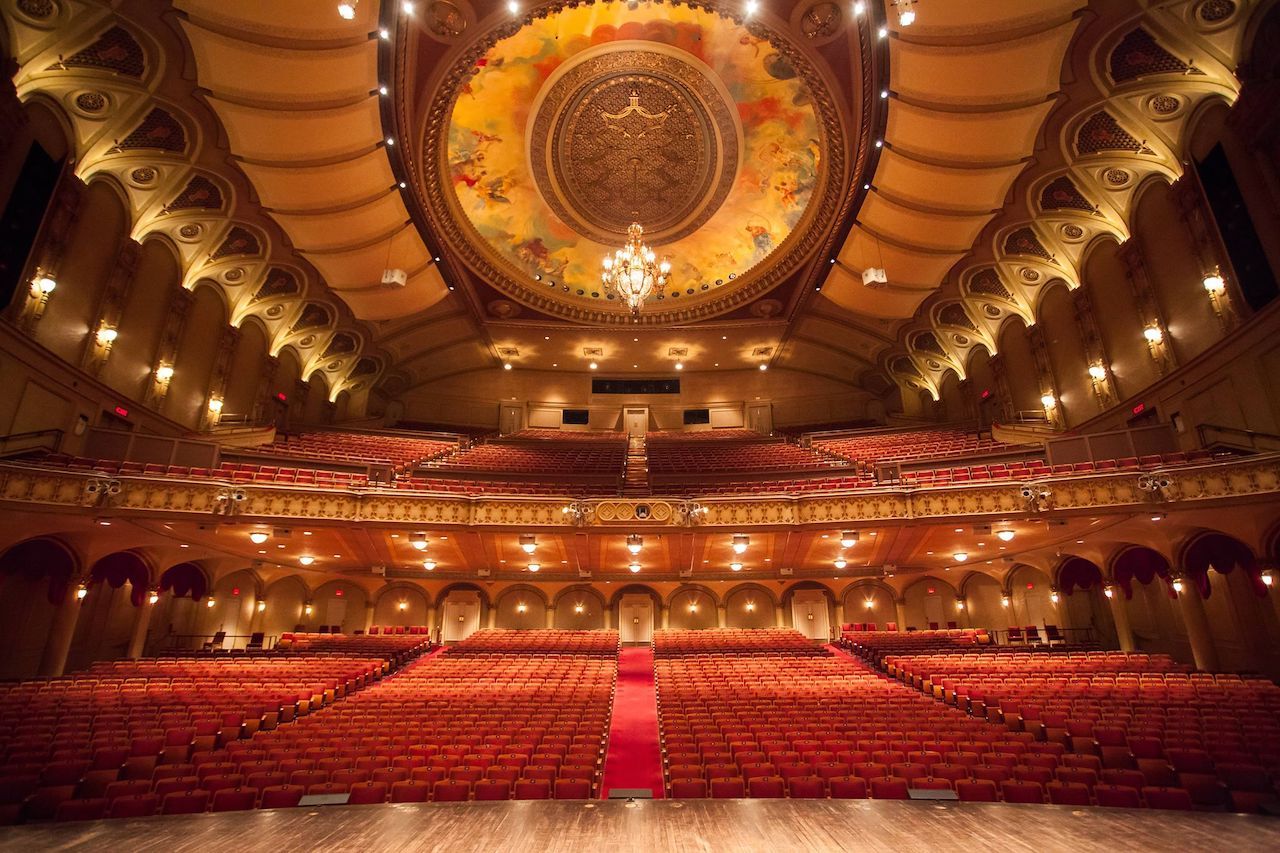 Theatre and music venues — If you can, try and catch a concert, dance, or performance art downtown. Three of Vancouver’s biggest live venues also happen to be exquisitely preserved Art Deco buildings worth visiting for their own aesthetic merits. The Orpheum is home to the Vancouver Symphony Orchestra, but also hosts top bands year-round. The Commodore Ballroom books everything from electronic to metal. True to its name, the Commodore Ballroom has a big wooden dance floor. The Vogue Theatre also has a diverse lineup.

In 2018, residents poured out their hearts and pocketbooks to save the historic Rio Theatre near Commercial Drive. The Rio shows art films and cult classics.