Being surrounded on all sides by mountains and water, real estate comes at a premium in Vancouver. Neighborhoods tend to be dense with mixed residential and commercial zoning, more easily navigated on foot than by car. If you only have a few days, try focusing on one or two of the areas that appeal to you rather than trying to squeeze in too much. Vancouver is by and large a relaxed city, and if you rush around you may find yourself out of tune with the locals. 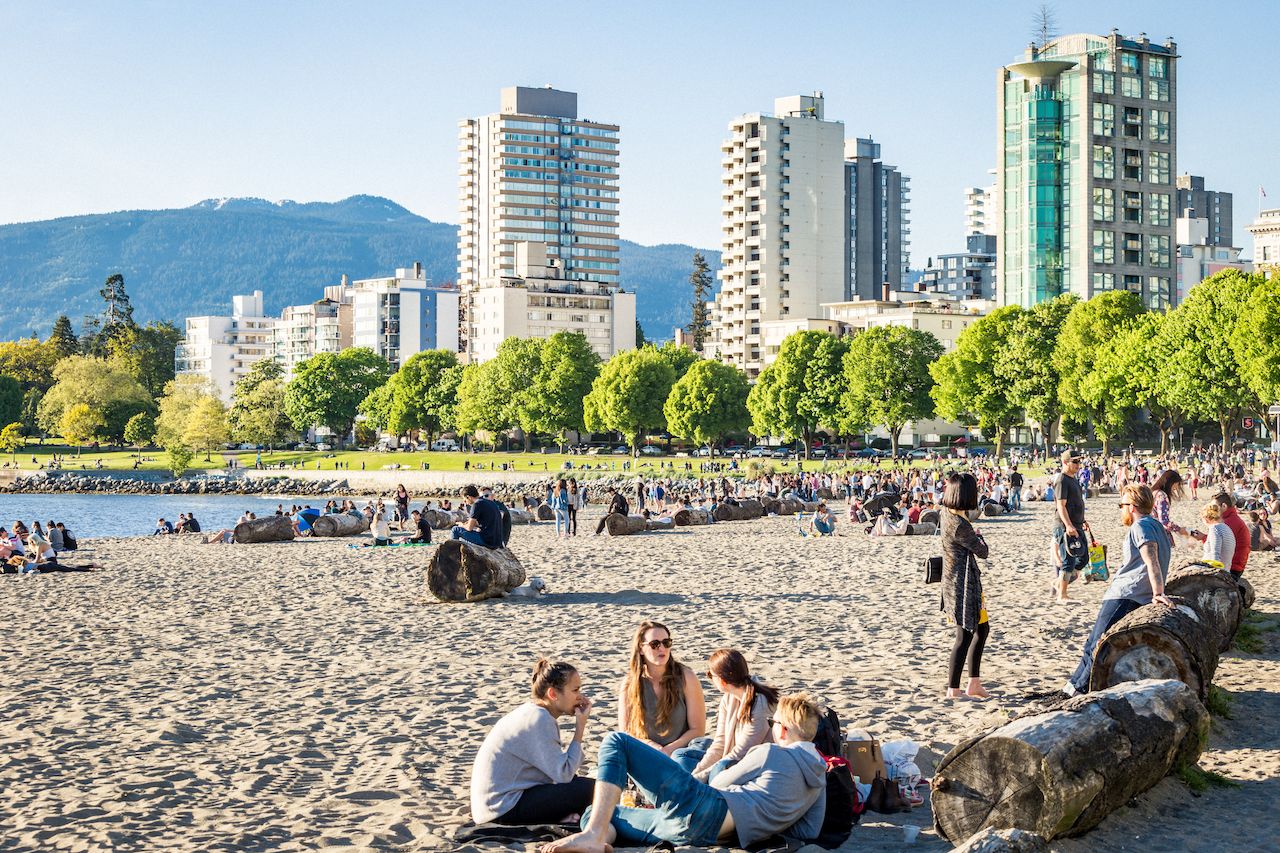 The West End — Comprised of the beaches of English Bay, the evergreens of Stanley Park, and the industrial beauty of Coal Harbour, the West End is the most scenic section of town. The neighborhood is the gateway to Stanley Park, one of the world’s biggest urban green zones which, like the rest of the city, rests on unceded territory belonging to First Nations people. Inside Stanley Park, you can wander around old-growth trees to check out First Nations art pieces and totem poles.

When the sun is shining, you can lounge on the sandy beaches of English Bay (Sunset Beach, Second Beach, or Third Beach). Several vendors on Denman Street have bicycles for rent, so you can cycle for hours along the seawall. With its rainbow-striped pedestrian crosswalks, the West End is also the established hub of the LGBTQ+ community. Every summer, the Pride parade passes through Denman and Davie streets. Parking is tough in this part of the city and public transportation here is less than you’d expect, but the area is pedestrian-friendly, so put on a comfy pair of shoes and walk around. 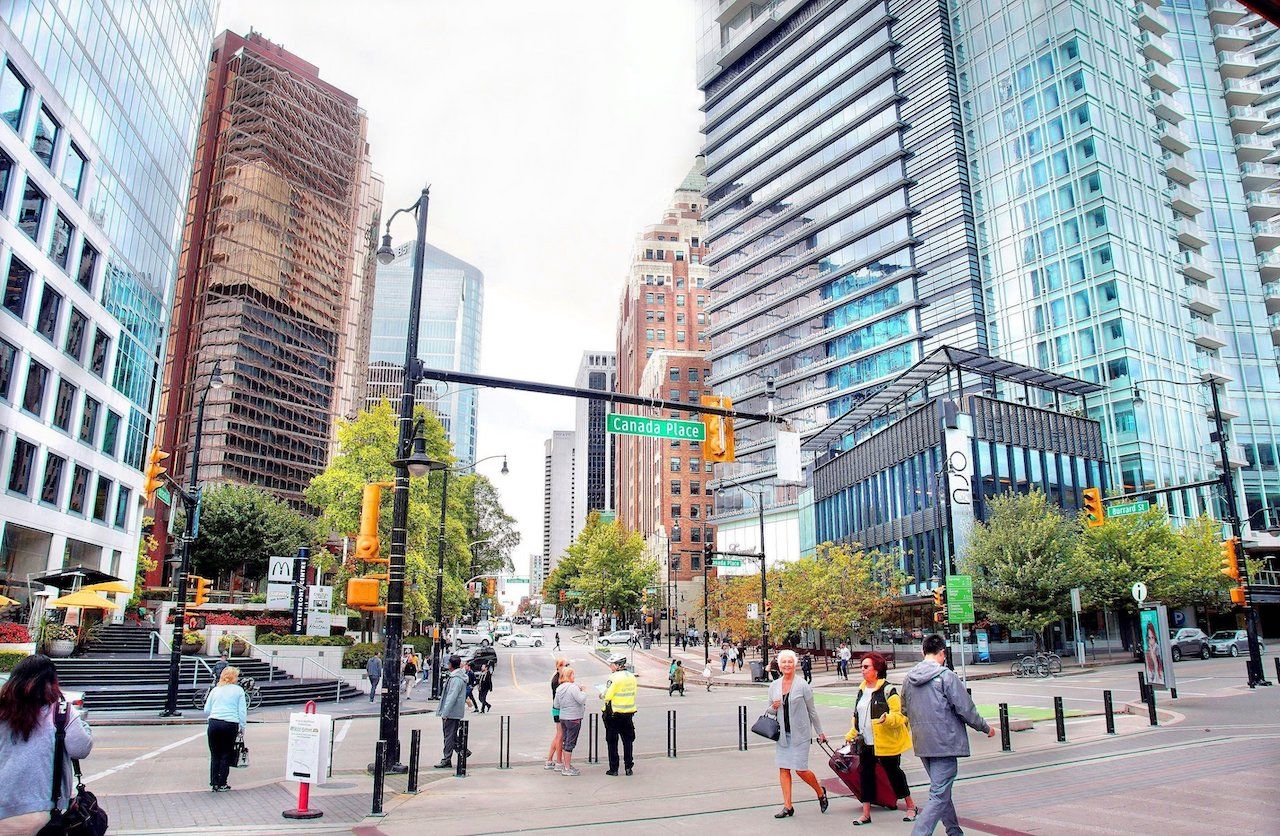 Downtown and Yaletown — Vancouver’s central business district (CBD) and downtown core is vibrant, multicultural, and a ton of fun. You will find an abundance of cheap eats, as well as all the global luxury brand stores and fast fashion. The architecture is modern and often playful, which can be seen on buildings including HSBC Pendulum Gallery, the Marine Building, Canada Place, and the Vancouver Public Library.

Granville Street is a sanctioned entertainment zone, and can be rowdy on weekend nights with a string of concert and theatre venues including the historic Orpheum Theatre and the Commodore Ballroom, both of which were built in the 1920s. If you want to explore the city on foot, the walk from Stanley Park (West End) to the Vancouver Public Library on Robson Street (downtown) takes about 30 minutes and goes through some of the city’s mainstream shopping zones.

Yaletown is a high-density residential zone that offers fine dining options. From here you can take the Aquabus or the False Creek Ferries, which offer private water taxis across False Creek to Granville Island and Kitsilano. Alternative-minded folk will prefer to wander east down Hastings Street toward the heart of the Downtown Eastside, leaving corporate culture for cannabis culture at the many dispensaries and cafes like Marc Emery’s Cannabis Culture. 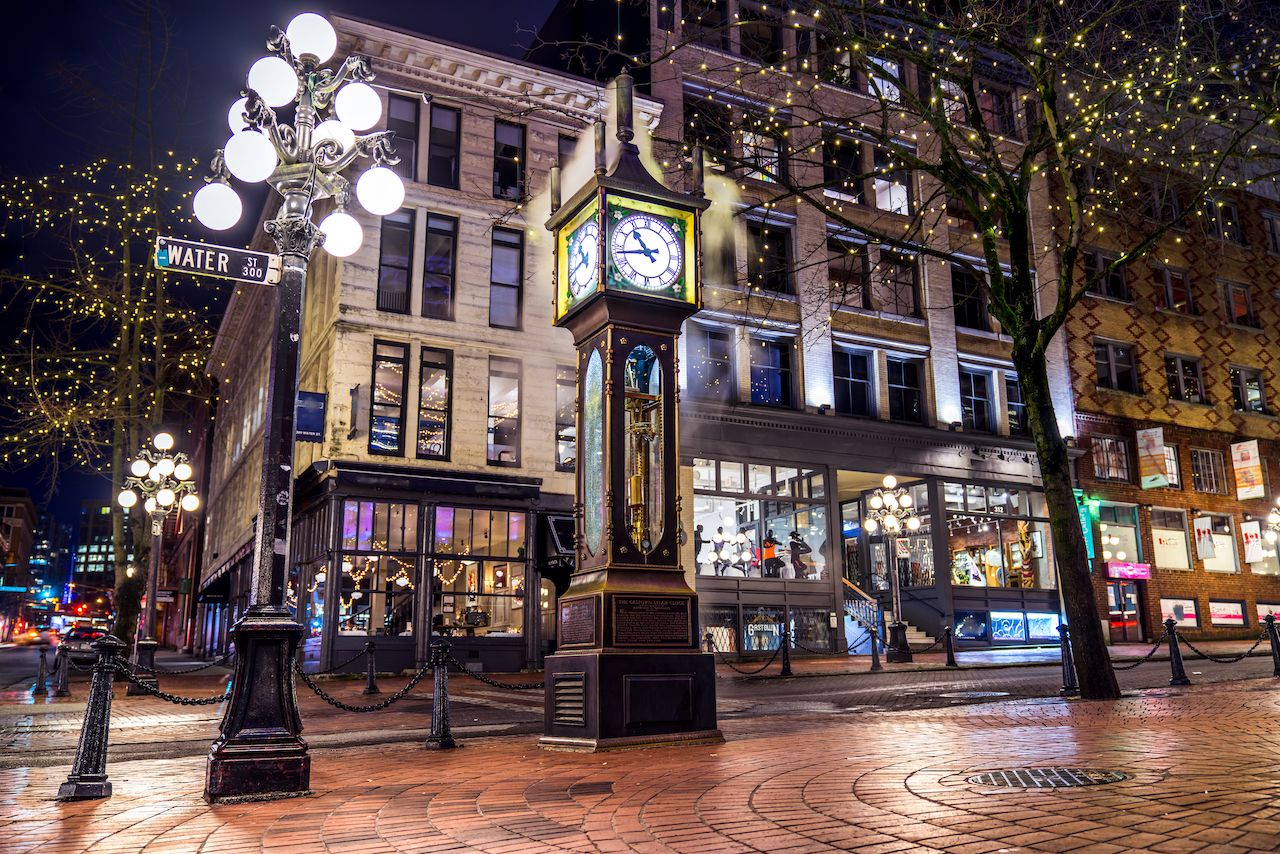 Gastown and Railtown — This area of Vancouver is full of steampunk chic genuinely dating from the 19th century. Ironically, Gastown is also the home of super swanky furniture and fashion boutiques, as well as trendy food and drink establishments.

Starting from Canada Place and Waterfront Station, head onto the cobblestone streets past the tourist shops and you will come upon cocktail bars, craft beer establishments, and hip fine dining. Make sure to check out the steam clock on Water Street — it is the only one of its kind in the world. Go past the statue of Gassy Jack, for whom the neighborhood is named, and you’ll come into the small area known as Railtown. Railtown, so named because of its proximity to the urban rail yard, is slowly gentrifying and already hosts the city’s top draw for craft beer: the Alibi Room. 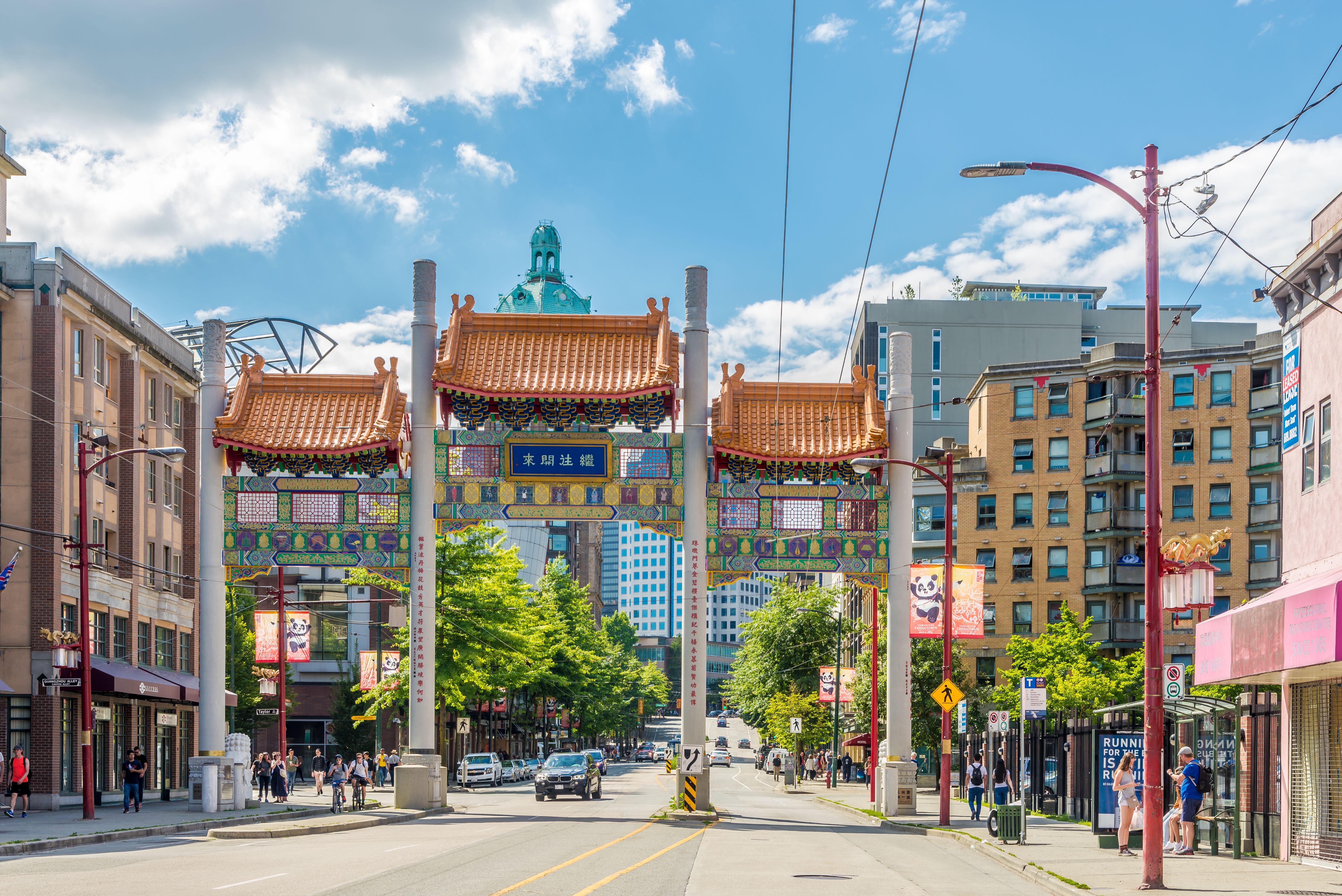 Chinatown and Strathcona — Although it is rapidly gentrifying, Vancouver’s Chinatown is still the real deal. It is a small zone, easily navigable on foot, and flows into Strathcona, a residential area known for its gorgeous heritage homes. Many of the buildings in the Strathcona and Chinatown neighborhoods date back to the late 19th and early 20th centuries.

The heart of the contemporary Chinese community has shifted to the suburb of Richmond, but old Chinatown still has all of the architecture, traditional Chinese medicine herb shops, produce stands, Cantonese bakeries, and cheap congee and noodles. If you visit during the day and need a moment of meditation, visit the Sun Yat-Sen Classical Chinese Garden. 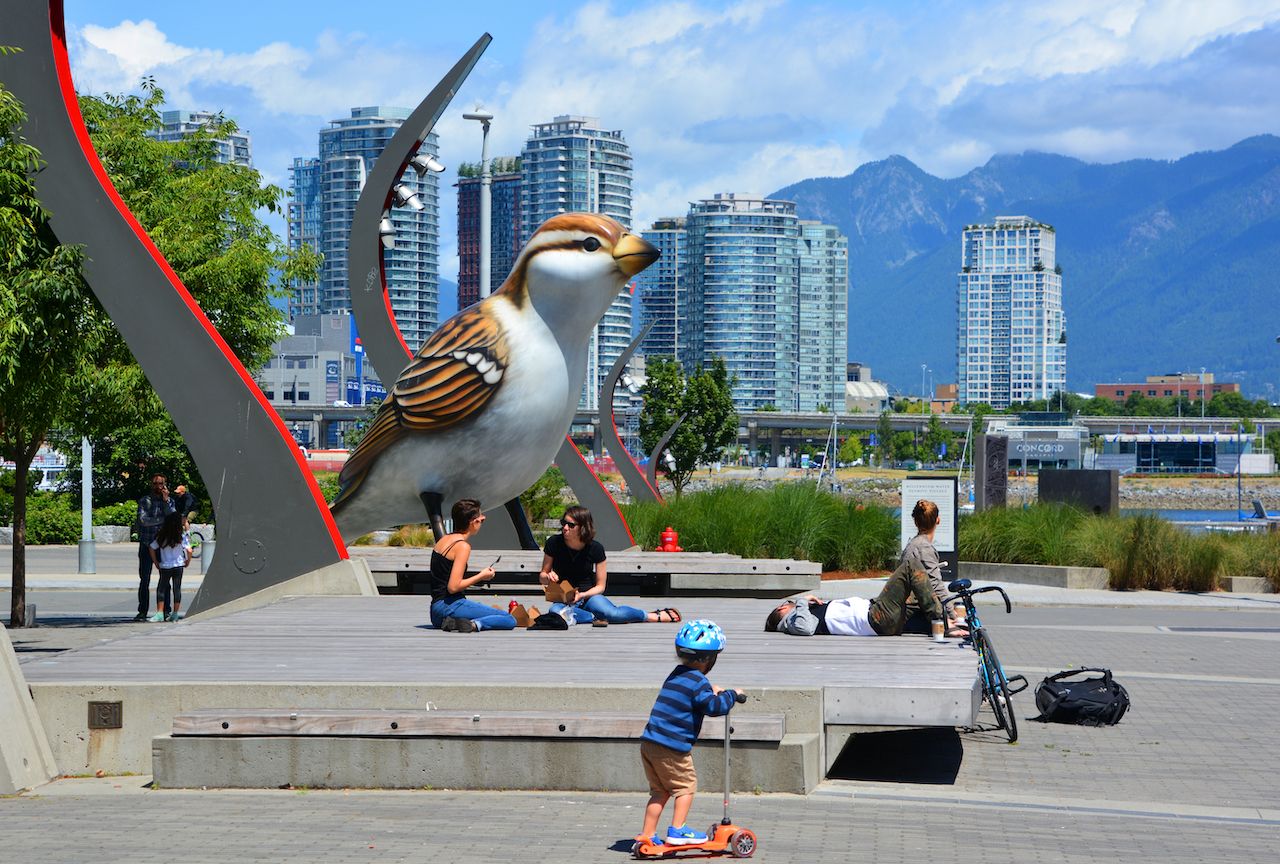 Olympic Village and Brewery Creek — Walking around the tip of False Creek from Chinatown, skirting around the “golf ball” of Science World, you will soon come to the city’s newest neighborhoods. Built up during the 2010 Winter Olympics to house the athletes, the Olympic Village has a futuristic vibe and offers superlative views toward downtown. Grab a seat on the gigantic patio of the Tap & Barrel or simply sit for a moment in Sparrow Square.

Between here and Mount Pleasant is an area known historically as Brewery Creek, which has appropriately been experiencing a revival of craft brewing. In just half a mile, you will find nine breweries. Notable places in Brewery Creek include Brassneck Brewery, Main Street Brewing, R&B Brewing, and 33 Brewing Exp/33 Acres Brewing. Modus Coffee and Elysian Coffee have by far the area’s best beans and baristas. 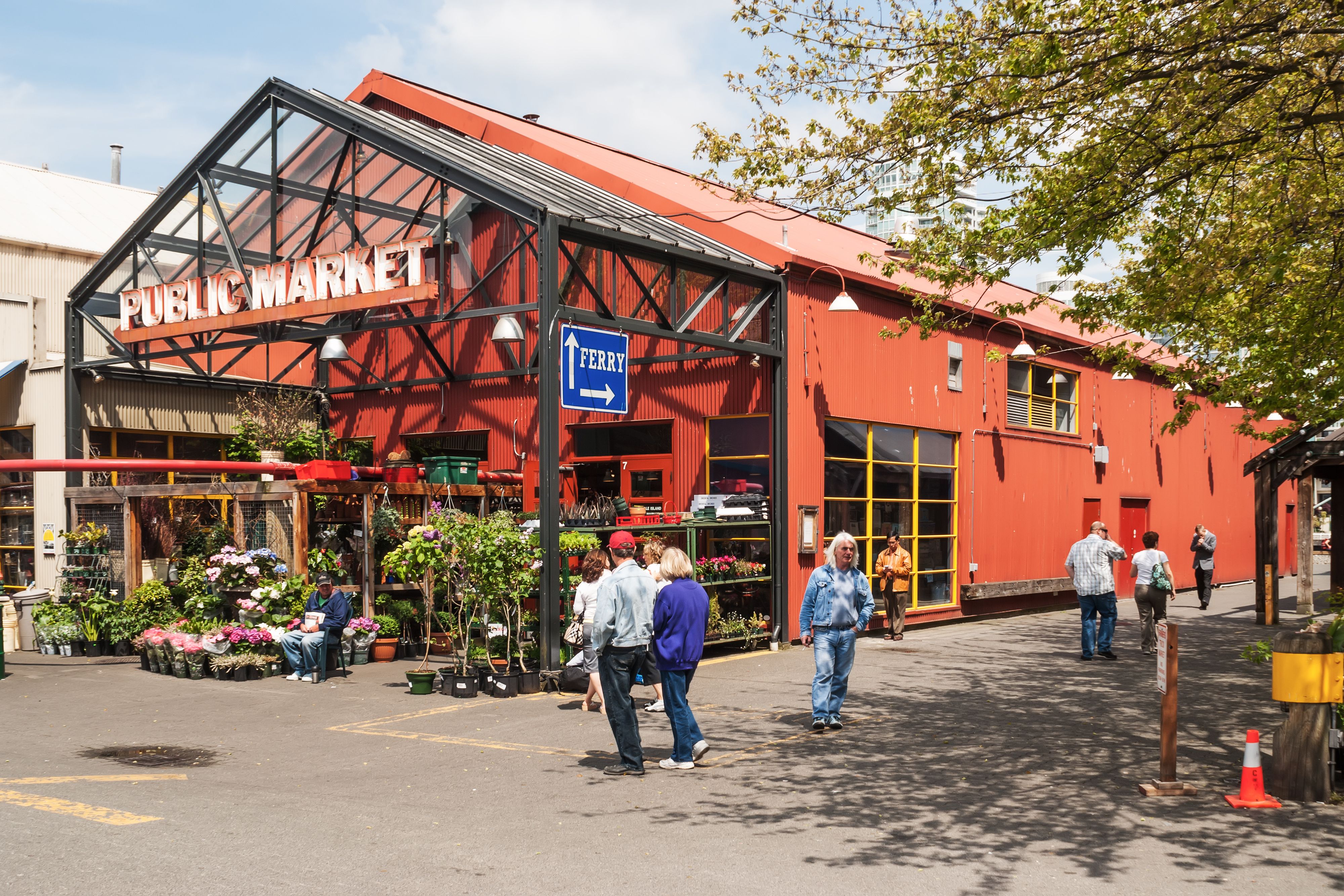 Granville Island — Never for a minute think that Granville Island is a tourist trap, as much as it may seem that way. Locals love it too, largely for the summer festivals held there, but also for the year-round indoor public market with its panoply of fresh produce, cheese, fish, meat, fresh pasta, and charcuterie.

It might not have the city’s best restaurants and certainly has no nightlife, but you can’t beat an afternoon lazing about — as long as you look out for the goose poop underfoot and are not afraid of hungry seagulls. Check out one of the city’s first craft breweries, Granville Island Brewing, or for something more unique, visit Artisan Sake Maker or Liberty Distillery. 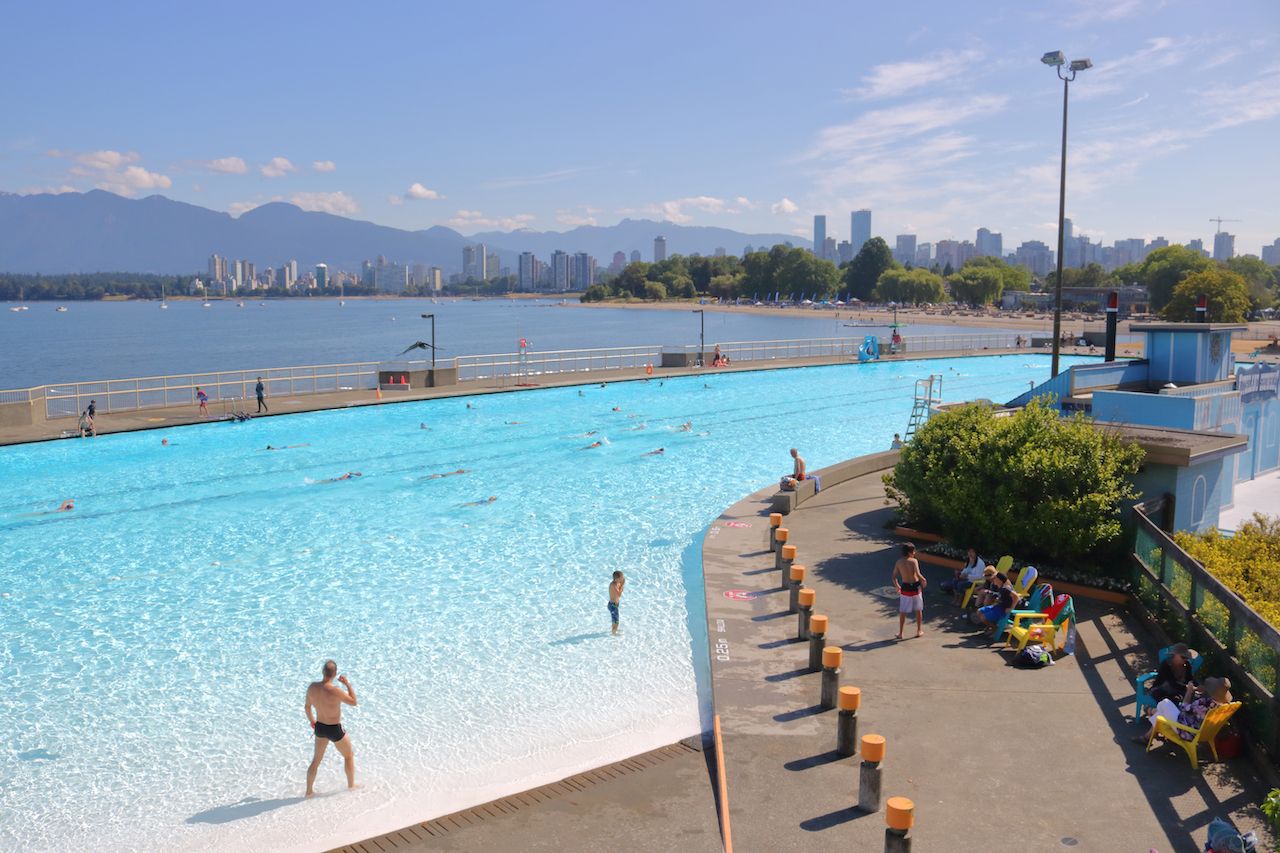 Kitsilano — The once-upon-a-time hippy neighborhood of Kitsilano is the birthplace of Lululemon, which is really all you need to know to understand its vibe, but it also has some of the city’s best boutique shopping — most notably the city’s best-curated selection of shoes at Gravity Pope, and a vinyl selection like no other at Zulu Records.

Kitsilano is also surrounded by urban beaches and yoga-toned bodies all times of the year. From May to September, you can bring the whole family to the city’s only saltwater public pool. Or, you can picnic in nearby Jericho Beach, where you can take part in windsurfing or kitesurfing. 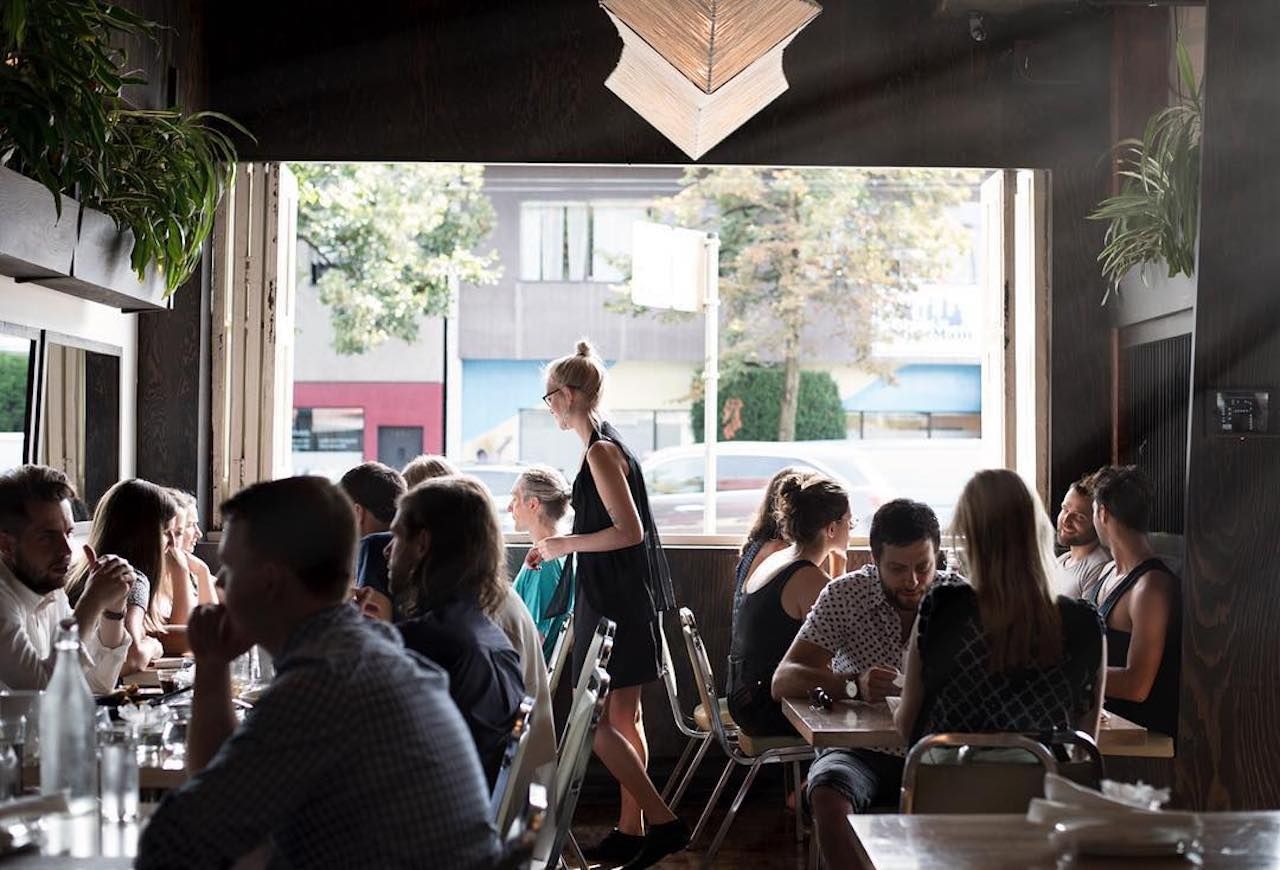 Mount Pleasant and Main Street — For a true cross-section of the layer cake that is Vancouver, take a day to walk Main Street. For a 35-block stretch between the Main Street SkyTrain station and 33rd, Main Street ebbs and flows from seedy to snobby and back again, and through it all, has the city’s best indie clothing, vintage stores, craft breweries, and specialty emporiums.

Standouts toward the northern end of Main Street include Blue Heron Creamery, but be sure to arrive early in the day as its products sell out fast. Bird on a Wire sells one-of-a-kind gift items made by local artists. If you want beer to take home, Brewery Creek is the best in the area for a pack of colorful cans. In a city with a glut of sushi restaurants, one of the few outstanding ones worth the nightly waits in line is Toshi.

Drive, take the Main Street (#3) bus, or walk 20 minutes south toward King Edward Avenue for more shopping, eating, and drinking. Front & Company is a fun shop with both used and new clothing — perfect for the old-meets-new vibe of Main Street itself. For top-notch vegan eats try Acorn, Meet on Main for pub grub, or Chick Pea for Israeli-style nosh. 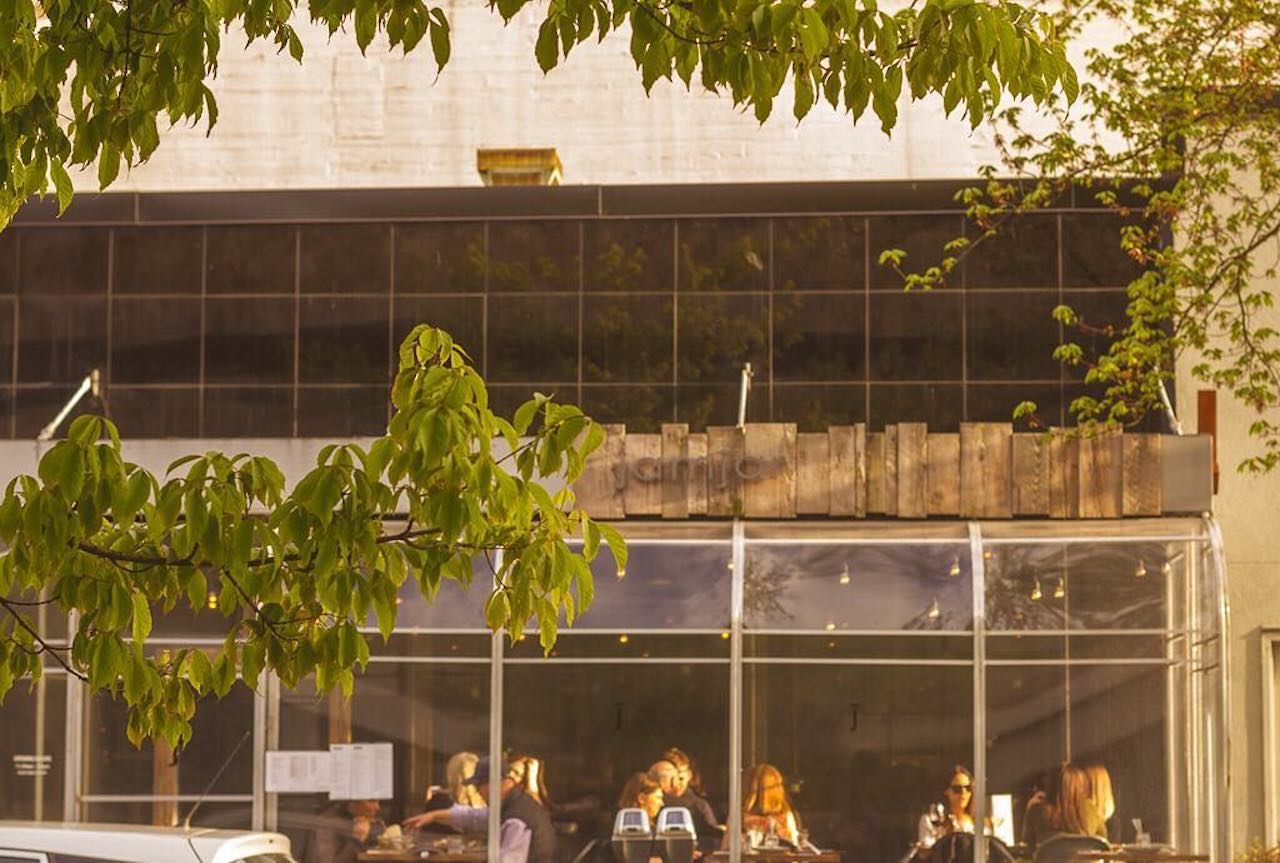 Commercial Drive — Historically the neighborhood was known as Little Italy. You can still find vestiges of the past in old-school coffee shops, but Commercial Drive is now known more for its counterculture ethos — the neighborhood is all funk and no formality. You won’t find any fine dining around here, but you can get yourself cuisine from all corners of the globe including Addis Cafe for Ethiopian and Jamjar for Lebanese. St. Augustine’s has the best beer list on the block. If you forgot to pack your party clothes, JQ Clothing has everything you need.

East Village and Hastings Sunrise — It would be unfair to call the Hastings Sunrise and East Village parts of town “up and coming,” given that these have been mainstays of blue-collar Vancouver for decades. Now more than ever, it’s a good time to visit if you are into food and drink, especially if your tastes veer more toward mom-and-pop hole-in-the-wall than fine dining. Pallet Coffee Roasters and Platform 7 Coffee are your best bets for coffee. Make your belly happy at Laksa King, and if you can, save room for northern Vietnamese specialist Mr. Red Cafe.

Referred to colloquially as “Yeast Van” instead of East Van, this area is also home to a dozen craft breweries within a one-kilometer zone. You could easily visit them all in a day if your liver allows, but for mere mortals, keep it simple and stick to local favorites like Parallel 49, Luppolo Brewing, Strange Fellows, and cult favorite Storm Brewing, which simply needs to be experienced to be believed.