Incorporated in 1837, Chicago is not an old city, but infused in its young DNA is a love for arts and culture. Early city boosters worked to create public spaces and parks, bring world expositions to the city, and build great museums that still stand to this day. Because of this legacy, modern Chicago is a major hub for culture, art, music, and architecture, and it can stand with the world’s great cities in any of these fields. From world-class art museums to a vibrant music scene, architectural styles that changed the world, and modern pieces that have become icons, here are the best parts of the city’s arts and culture. 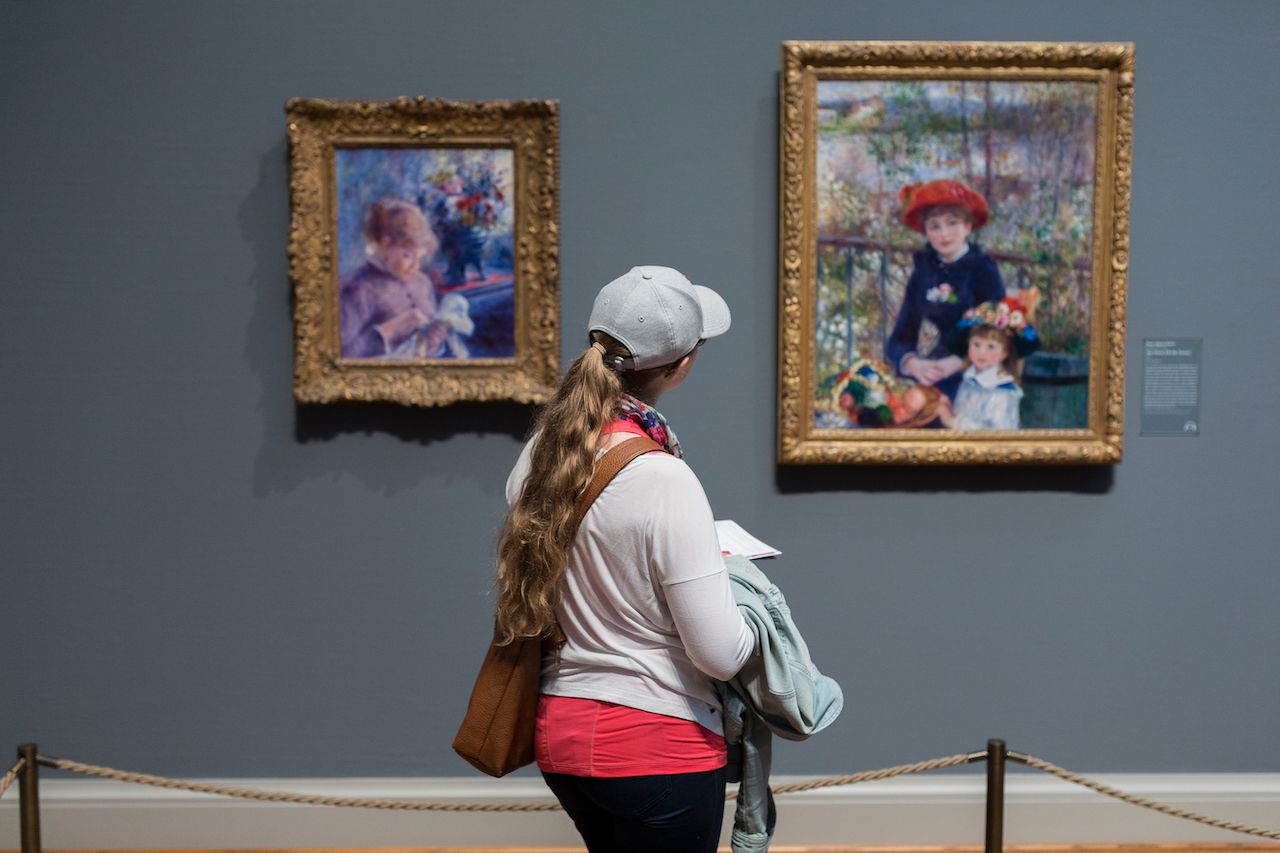 The Art Institute of Chicago — The Art Institute of Chicago holds a permanent collection of over 300,000 works covering cultures from around the world and across the past 5,000 years. Some of the world’s best-known works by artists such as Picasso, Van Gogh, Dali, and many more are housed here, but it’s not just amazing, two-dimensional paintings that you’ll find there: There are sculptures, cultural objects such as an ancient Egyptian coffin and mummy, and textiles. You could easily spend days exploring the museum and the new Modern Wing, but a half-day will cover all the highlights, including one of Monet’s Water Lilies and Grant Wood’s American Gothic. 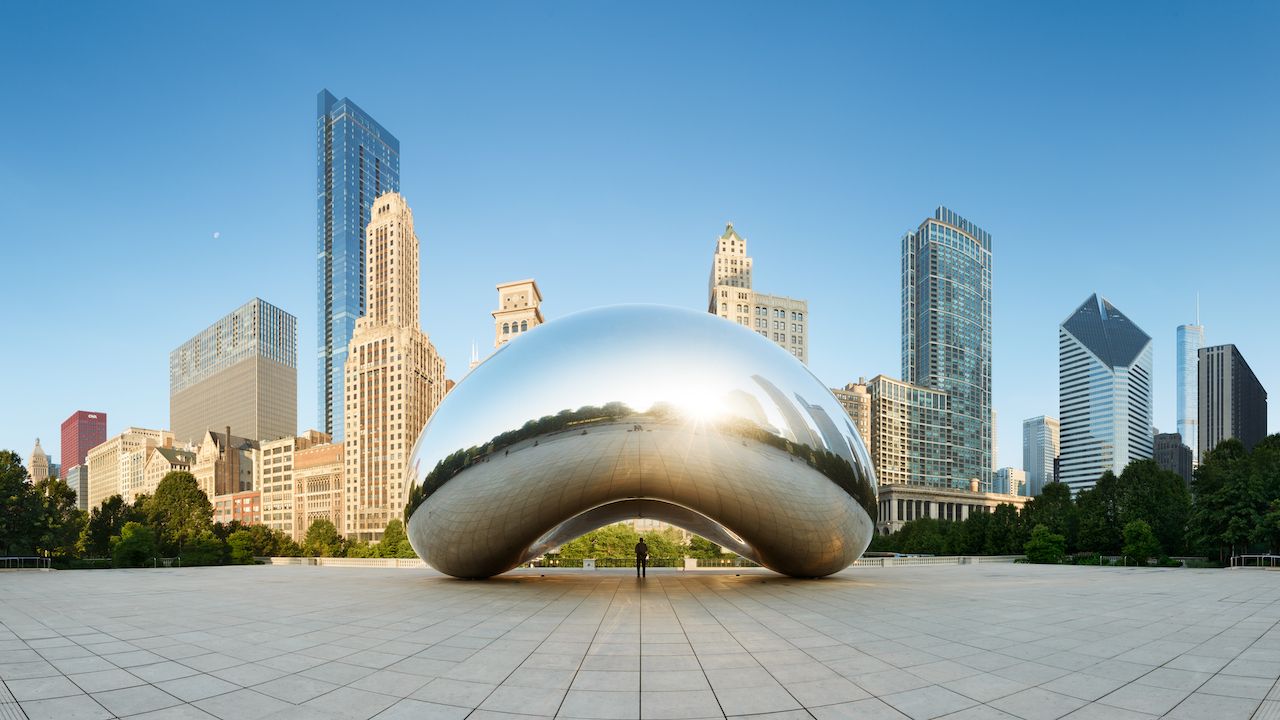 Cloud Gate aka “The Bean” — The most iconic piece of public art in Chicago, Cloud Gate is a giant outdoor sculpture located in Millennium Park that everyone refers to as “The Bean.” Although it’s only been completed since 2006, the large sculpture has become synonymous with the city of Chicago. Designed by British artist Anish Kapoor, the 33-foot-tall piece is inspired by a droplet of liquid mercury. The highly reflective stainless steel surface makes this a great place to take photos either of you and your friends or of the city skyline, curved and distorted in the rounded surface. While you’re here, be sure to visit the windy and futuristic BP Pedestrian Bridge that weaves from Millennium Park to Maggie Daley Park. 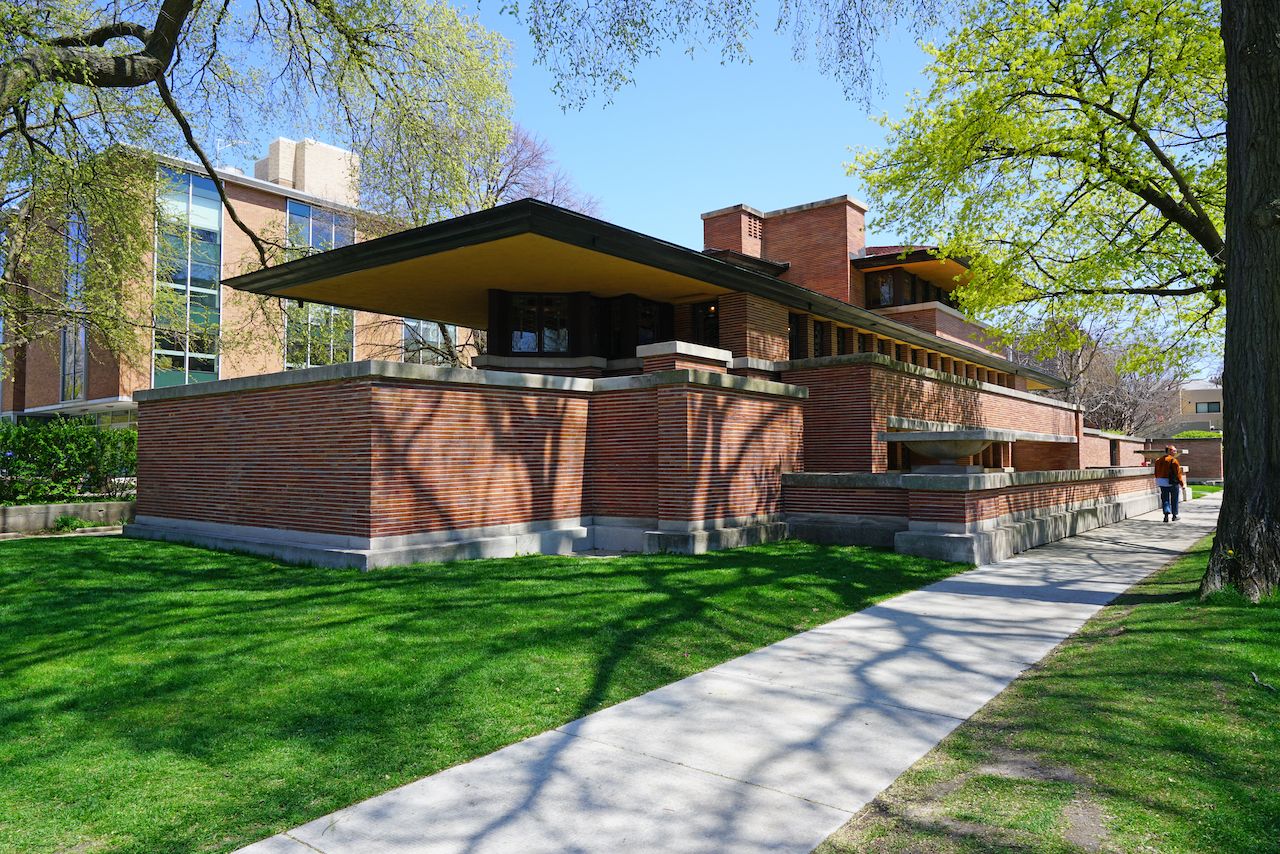 Frank Lloyd Wright’s Robie House — Inspired by the prairie landscape of flat plains that surround the city of Chicago, world-renowned American architect Frank Lloyd Wright designed Robie House in 1908 and completed the project in 1910. The house, located in Hyde Park on the city’s Southside, is furnished entirely by pieces designed by Wright, from the lights and carpets to the furniture. A UNESCO World Heritage site since 2019, Robie House is a must-see for those who are keen to learn more about American architecture. We recommend you take a guided tour to truly appreciate this unique piece of architecture. 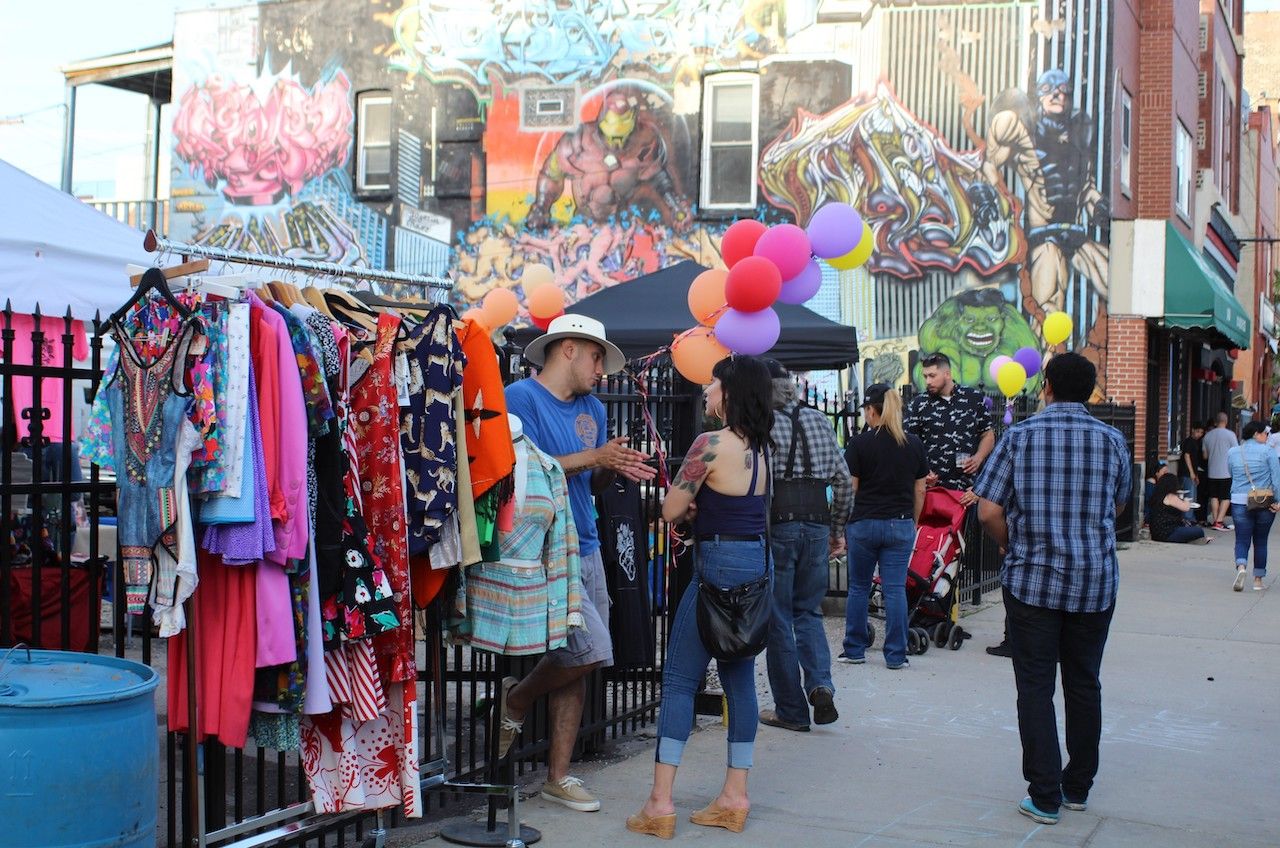 Pilsen Murals — Pilsen is the heart of the Mexican-American community in Chicago, and the neighborhood is also home to the city’s most vibrant mural scene. These public artworks originate in an art movement from the 1960s that blended elements of the political, religious, and cultural. These works celebrate the Mexican and Chicanx culture in all its forms and expressions. Check out Galeria del Barrio at 16th Street and Blue Island, a 1976 mural by Aurelio Diaz. Across the street, take a look at Sam Kirk’s Weaving Cultures. Another favorite is Jeff Zimmerman’s Increíbles Las Cosas Que Se Ven, a three-panel mural atop a laundromat at 19th and Ashland. But because there’s street art to be admired all over the city, the City of Chicago’s Department of Cultural Affairs and Special Events has created a mural registry that compiles all of Chicago’s murals — check it out and create your own street-art itinerary. 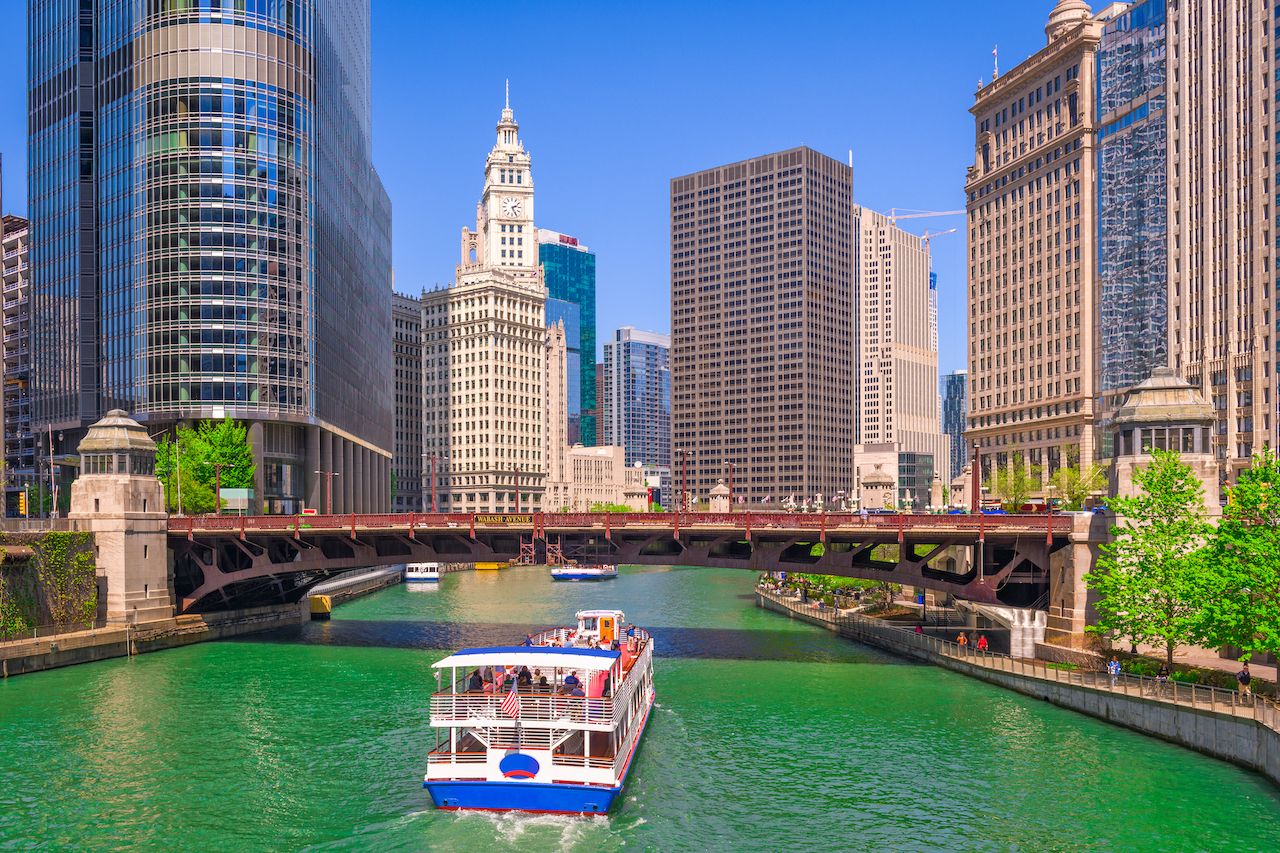 Chicago River architecture tour — Chicago is the birthplace of the skyscraper and the US’s hub for architecture. The city has more iconic buildings, fountains, bridges, houses, churches, and sculptures than you can even begin to count. The Sears Tower (technically called the Willis Tower now, but not to Chicagoans) was the world’s tallest building from its completion in 1973 until 1998. You can go to the top of the tower for a hefty fee, but the best (and more economical) way to see all of the city’s magnificent high-rises is by boat on the Chicago River. It doesn’t matter if you’re an architecture buff or totally indifferent — seeing Chicago from the water is a great way to get to know the city. We highly recommend taking a cruise with the Chicago Architecture Center for a detailed tour. 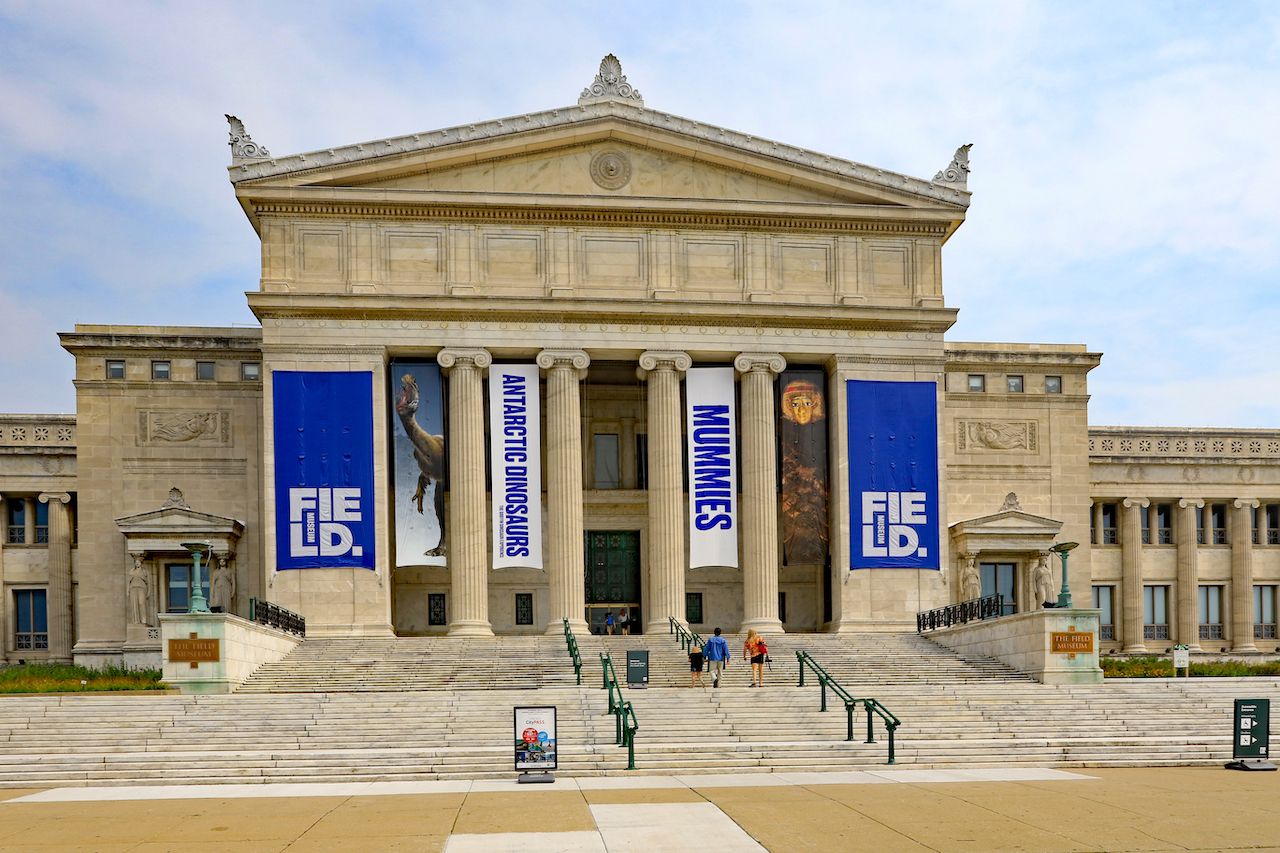 Chicago Museum Campus — Southeast of The Loop, The Museum Campus is a 57-acre park that has three of Chicago’s greatest attractions: The Field Museum of Natural History, the Shedd Aquarium, and the Adler Planetarium. Each of these institutions is exceptional, but if you only have one day, choose just one and take the time to enjoy its collection. Even without the museums, the Museum Campus is worth visiting. Walking toward the planetarium on the peninsula that juts out into the lake, you’ll find the city’s best skyline views. Beyond the planetarium, Northerly Island is a great park with a small beach and a beautiful bird and butterfly sanctuary, along with more cityscapes views. The Museum Campus also contains Soldier Field, the city’s football stadium. 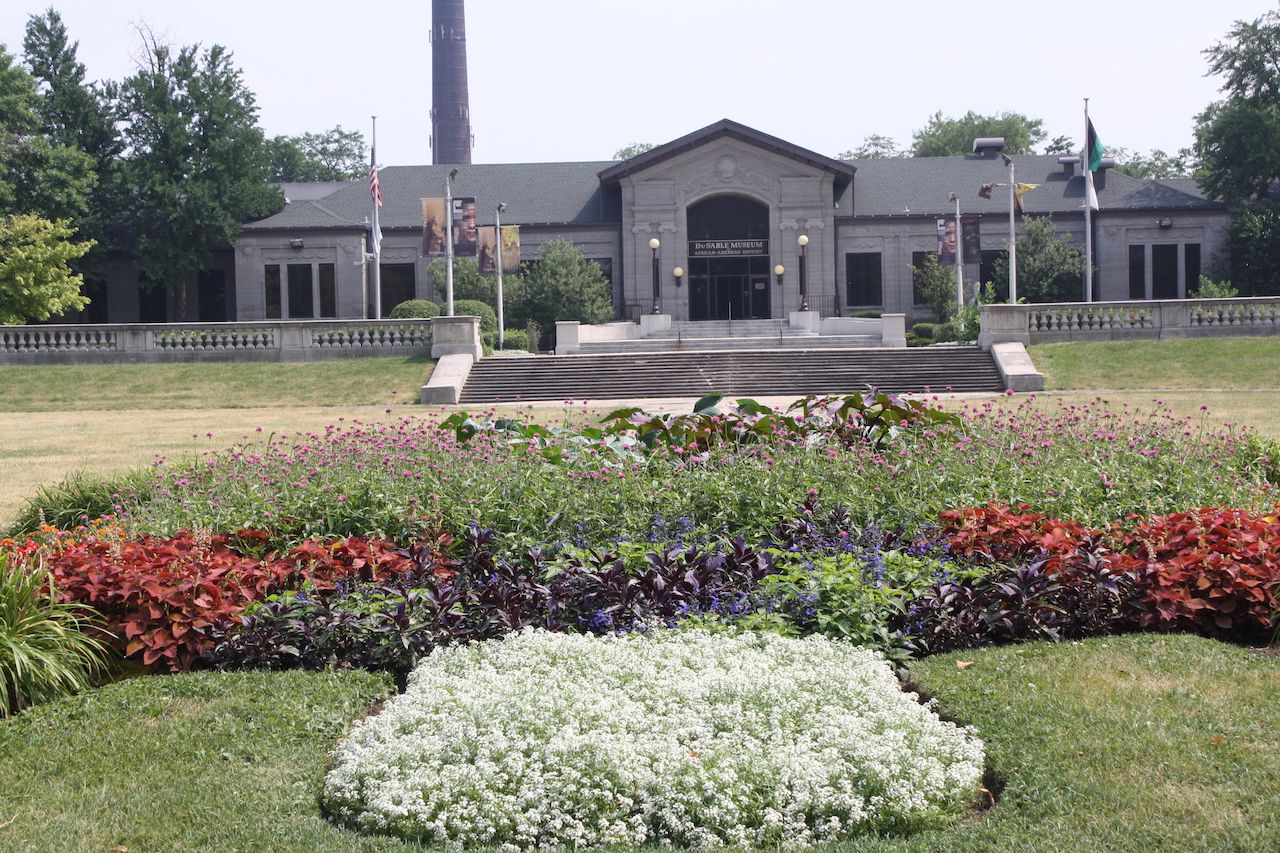 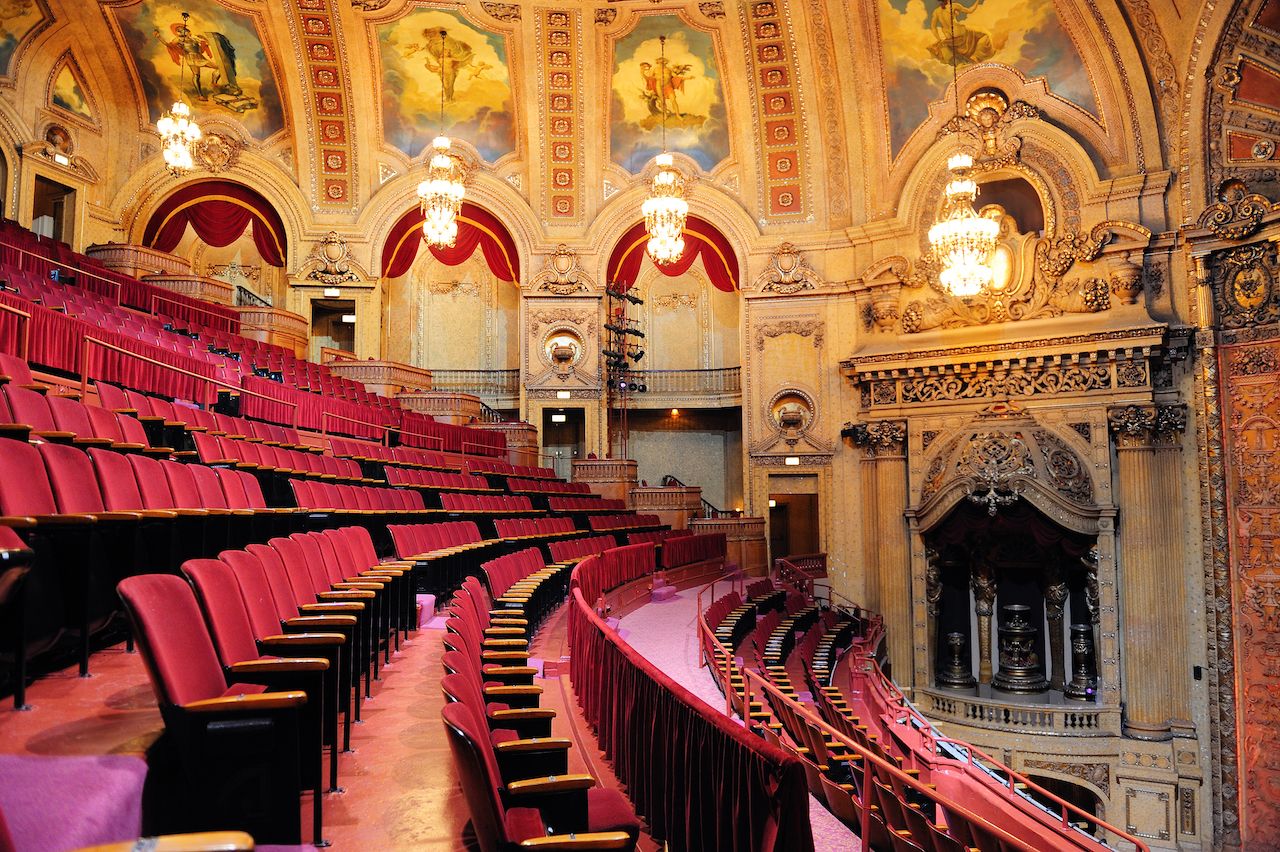 The Chicago Theatre — This 1921 grand venue that can hold 3,800 spectators has become a symbol of the city. The impressive lights of the large sign and marquee, as well as the beautiful facade, are only part of the attraction: Inside the decor is one of opulence with gorgeous painted cupolas and velvet everything. The theater hosts world-famous artists for concerts (Madonna, Hozier), live comedy (Jerry Seinfeld), magic shows (Penn and Teller), but if you don’t want to attend a performance, you can still check out the iconic theater by taking a tour of the venue and even stand on the stage. 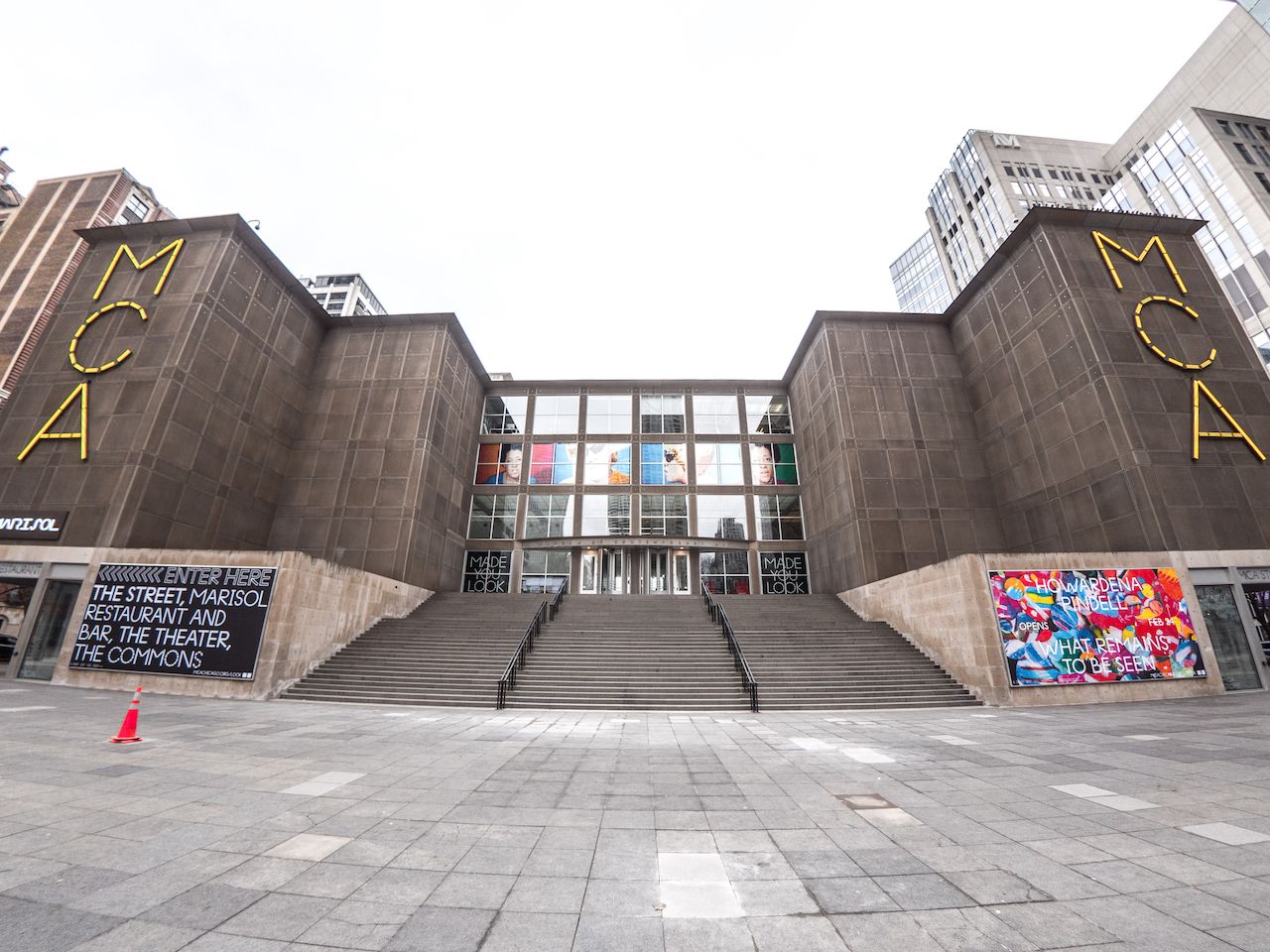 The Museum of Contemporary Art — If modern art is your jam, The Bean is not the only place that will get you excited. The MCA’s extensive collection covers all media, from paintings, sculptures, and photographs to installations, performances, and more, so you never get museum fatigue. The permanent collection holds works from heavy hitters like Magritte, Andy Warhol, and Francis Bacon. 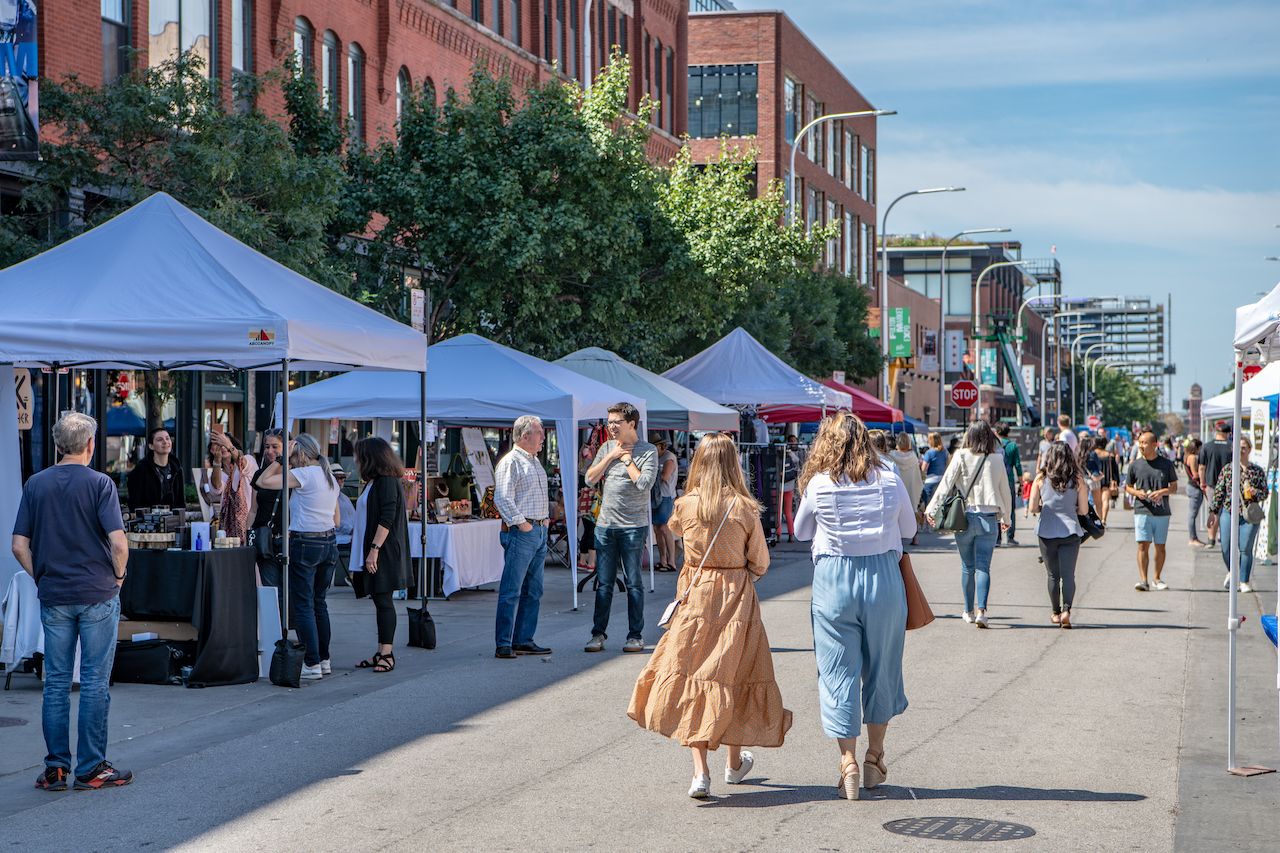 Summer neighborhood street festivals — Every summer weekend in Chicago, nearly 400 different neighborhood street festivals are held across the city. These can be celebrations of music genres, crafts, arts, ethnic heritage, or specific streets or neighborhoods. Nearly all of these have great live music, and many feature visual and performing arts exhibitions. Some of the best are Do Division, Logan Square Arts Fest, Wicker Park Fest, Square Roots Festival, The Silver Room Block Party, and Taste of Randolph. You can find a complete calendar list of street festivals on the City of Chicago website. 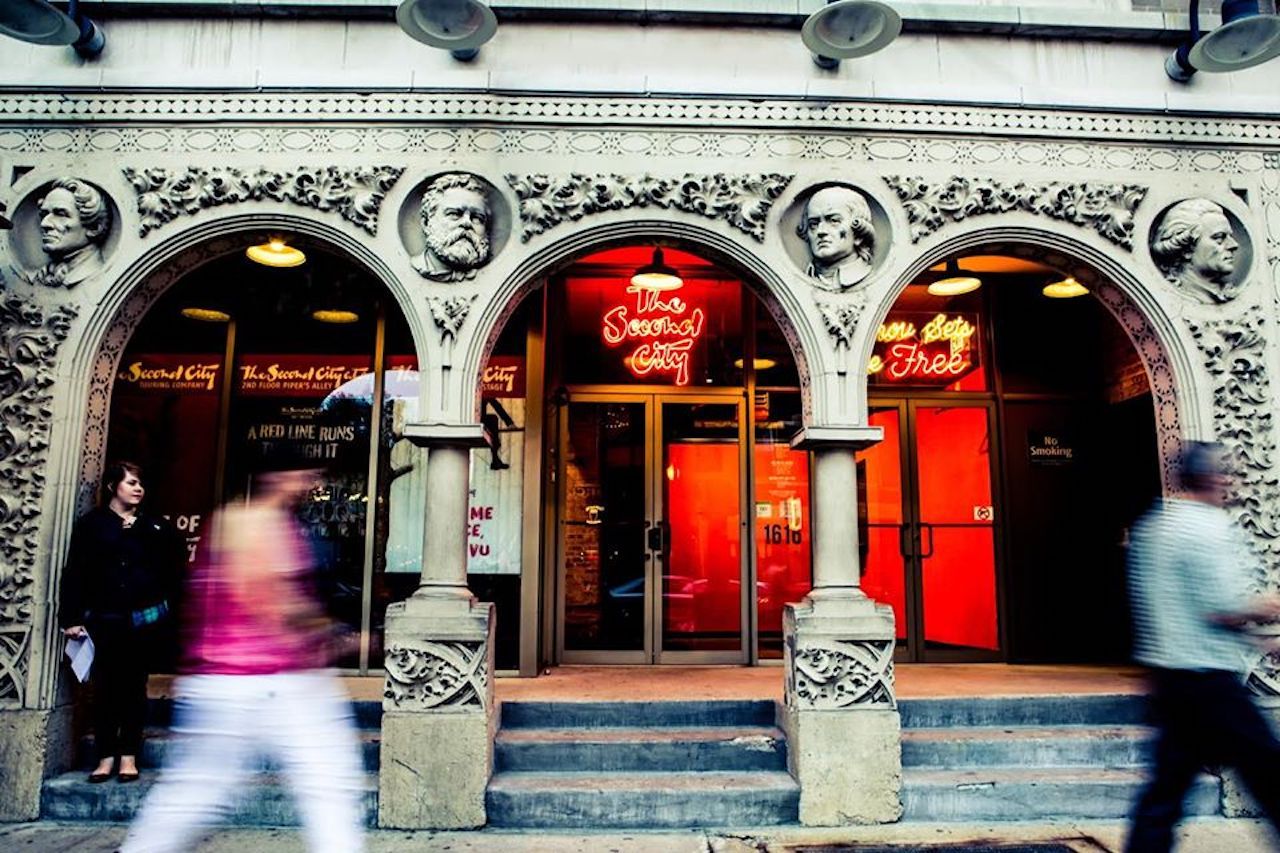 The Second City — Fans of Saturday Night Live are probably familiar with The Second City, the improv comedy school and venue that’s been churning out cast members for decades, among them John Belushi, Chris Farley, Amy Poehler, and Tina Fey. The list of comedic geniuses to have graced the stage at The Second City extends far beyond the SNL family, however, with celebrities like Steve Carrell and Stephen Colbert also featuring, so there’s a good chance you’ll see a future-famous performer if you drop by for a show (or, if you’re lucky, a famous alumni). There’s at least one show most nights of the week and often many to choose from, be it a headline or guest performance, student show or training-center performance, sketch-comedy show or stand-up session. Browse the calendar to see what’s on during your next Chicago trip.