It’s tough to say you’ve been to Colorado without spending time in the mountains. Within a couple hours of Denver, you can find yourself in the heart of the state’s celebrated mountain towns, walking Boulder’s Pearl Street Mall, or staring in awe at the towering flatirons of Garden of the Gods. Hop in a rental car and check out these day trips near Denver. 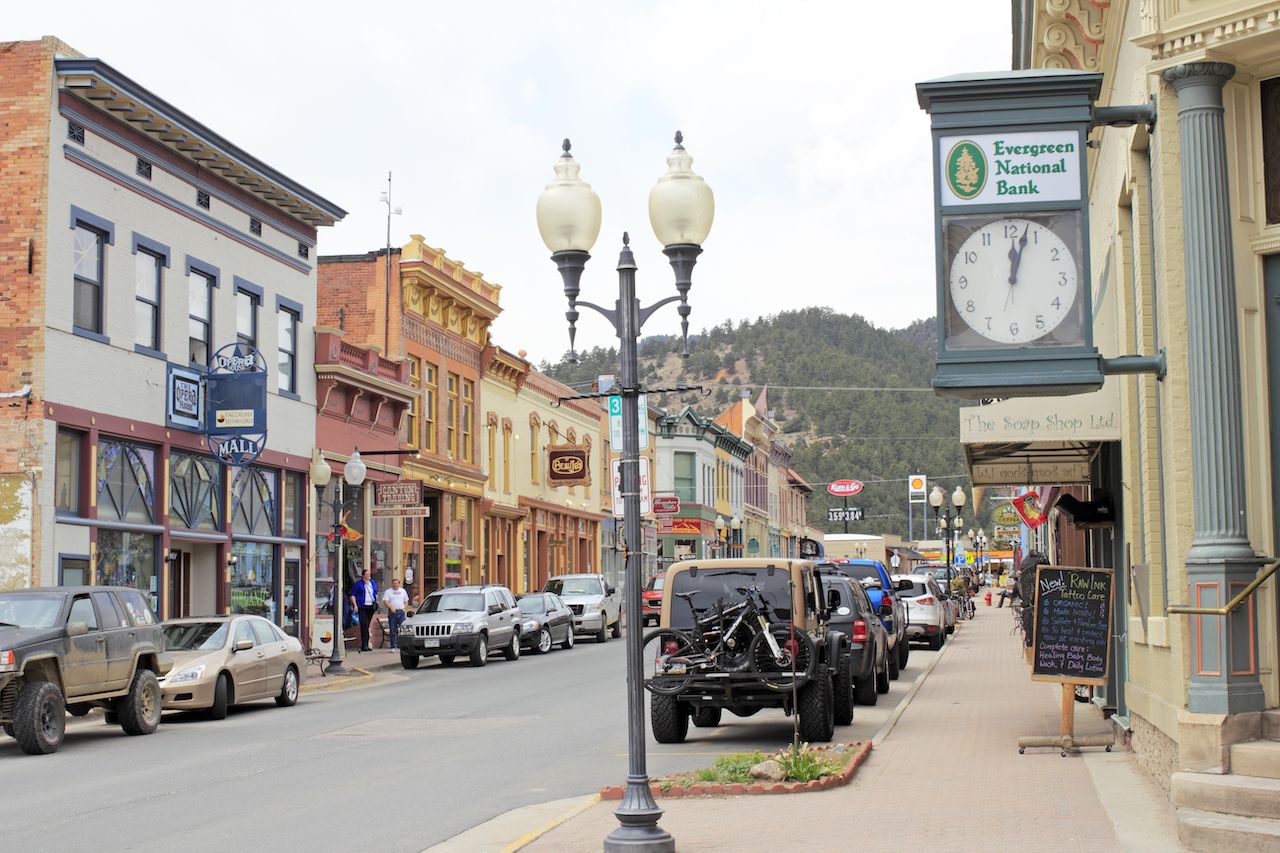 Evergreen and Idaho Springs — The closest day trips you can take would be to Evergreen or Idaho Springs, and both are only about 30 minutes from Denver. Start in the morning, taking I-70 west, and stop for a hike at Bergen Peak in Evergreen. If you have the time and energy, allow four to five hours to summit the peak and head back down — nine and a half miles roundtrip. If not, you can still take in the gorgeous views of forested hilltops from a number of shorter hikes in the area at Alderfer/Three Sisters Park or Genesee Park. Get back on the highway and head into Idaho Springs for a Mountain Pie at the original Beau Jo’s pizza and a post-hike toast at one of the brewpubs in town. Here, you can also raft Clear Creek or stop by the old Phoenix Gold Mine. Total drive time is about an hour and a half roundtrip. 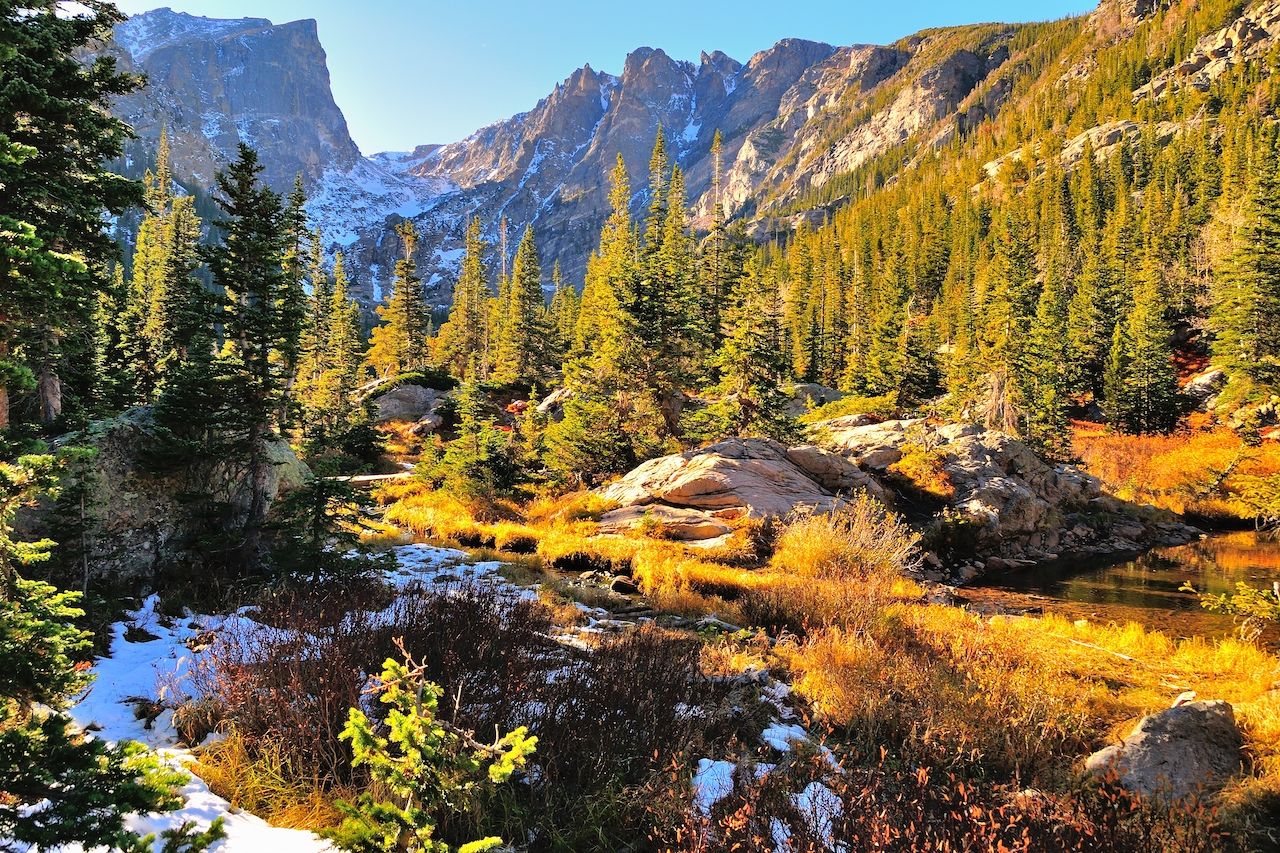 Rocky Mountain National Park — The gem of Colorado’s high country, Rocky Mountain National Park has to be seen in order to grasp how stunning it really is. During non-snowy months, you can drive Trail Ridge Road from the park’s east entrance near Estes Park to the west entrance near Grand Lake, reaching an elevation of 11,500 feet. You can get even higher by doing a bit of hiking from one of the many pull-offs along the way. You’ll see out across peaks and valleys for miles, with Longs Peak standing as the crown. You’re also bound to spot multiple forms of wildlife, so keep your wits about you. Also, be sure to stop at the gift shop near the summit. In winter, the park is prime for snowshoeing, cross-country skiing, and even downhill backcountry skiing and snowboarding. 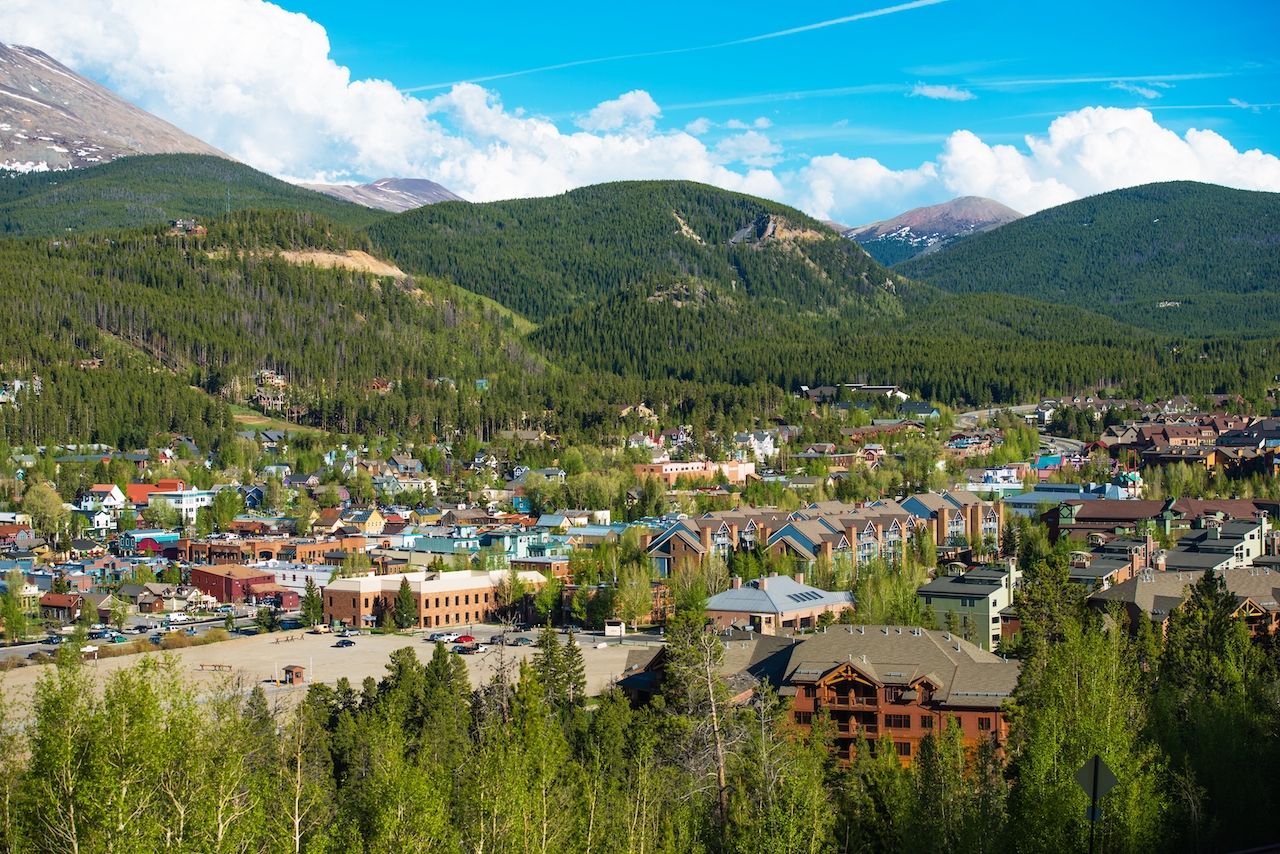 Summit County — The de facto capital of Colorado’s mountain country, Summit County is the base for accessing many of the state’s most popular mountain towns. In the winter, skiers and boarders flock from around the world to the famed slopes of Breckenridge, Copper Mountain, Keystone, and more. In summer, hiking, biking, and climbing reign supreme. From Denver, head west on I-70 through the Eisenhower Tunnel and get off at exit 203 for the towns of Frisco and Breckenridge.

Breck is quintessential Colorado. A festive main street commercial district houses a number of unique shops and restaurants, and a gondola takes you to the base of the mountain resort where you can ride the alpine slide, tear down the slopes on a mountain bike, or enjoy a scenic chairlift ride and hike. On Main Street, Downstairs at Eric’s is a casual restaurant with solid pizza and a beer menu that screams craft. With a total drive time of four hours, this entire route can be done in a day, putting you back in Denver before it gets late. 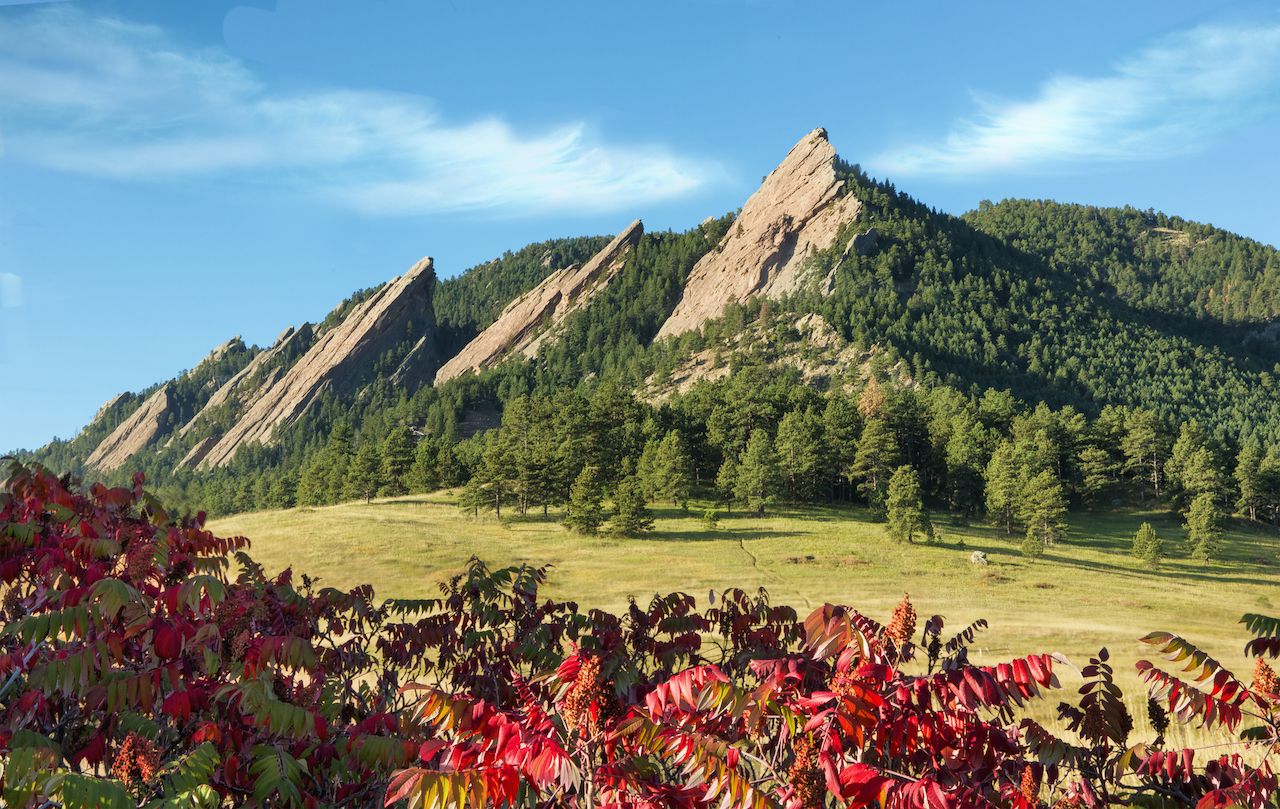 Boulder — Despite being a city of just over 100,000, Boulder is one of the most recognized places in Colorado. Thousands of hippies set up camp here in the ‘60s and most seem to have never left. And now that the tech scene has turned Boulder into “Silicon Valley in the hills,” the city’s downtown is among the most popping places in the state. A magnet for outdoorsy types, it’s also where you can hit the trails of Chautauqua Park toward the red rock Flatirons just outside of town, test your mountain biking chops at Valmont Bike Park, or get your climbing fix at the First Flatiron or Eldorado Canyon State Park.

The downtown dining scene features some of the state’s best chefs, and it feels like there’s a brewpub on every block. Best of all, Boulder is less than an hour from Denver and you don’t even need a car to get there. The Flatiron Flyer bus departs from Union Station every 15 minutes. From the Downtown Boulder Station, you can walk over to the Pearl Street Mall or hop on a ride over to the Hill. You can also park your bike on the bus’ bike rack and cruise to the trailhead. 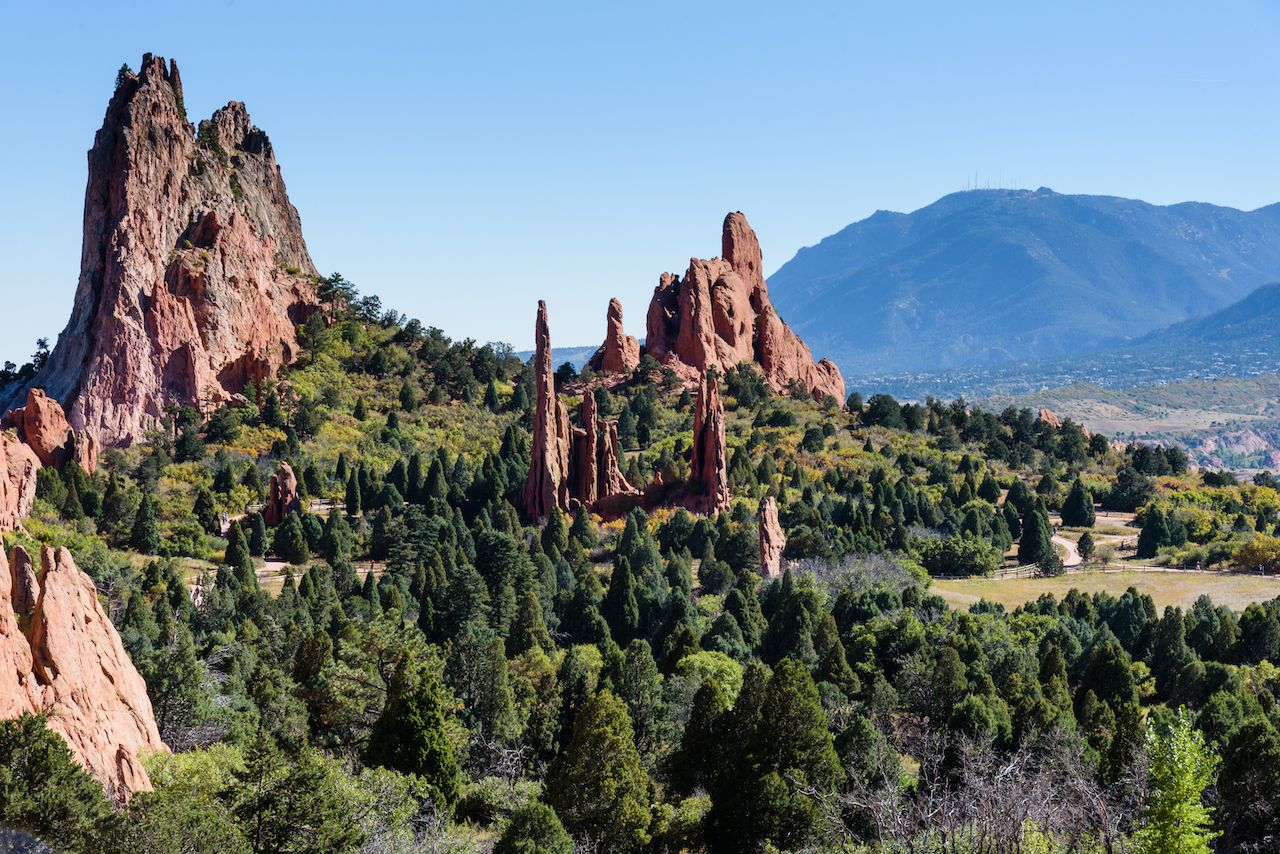 Garden of the Gods — Just an hour and a half south of Denver, Colorado Springs’ Garden of the Gods contrasts central Colorado’s tallest mountains, including the 14,000-foot Pikes Peak, with monstrous red rock formations that slice through the hilled skyline. The park has a number of hiking trails as well as options for biking and rock climbing. For a local’s secret, avoid the tour bus crowds at the center of the park by taking the three-mile Chambers, Bretag, and Palmer loop trail. You’ll get the same stunning vistas with enough room to maintain a casual conversation. Nearby, The Broadmoor resort offers several dining options for lunch and dinner, ranging from a quick service cafe to fine Italian at Ristorante del Lago. 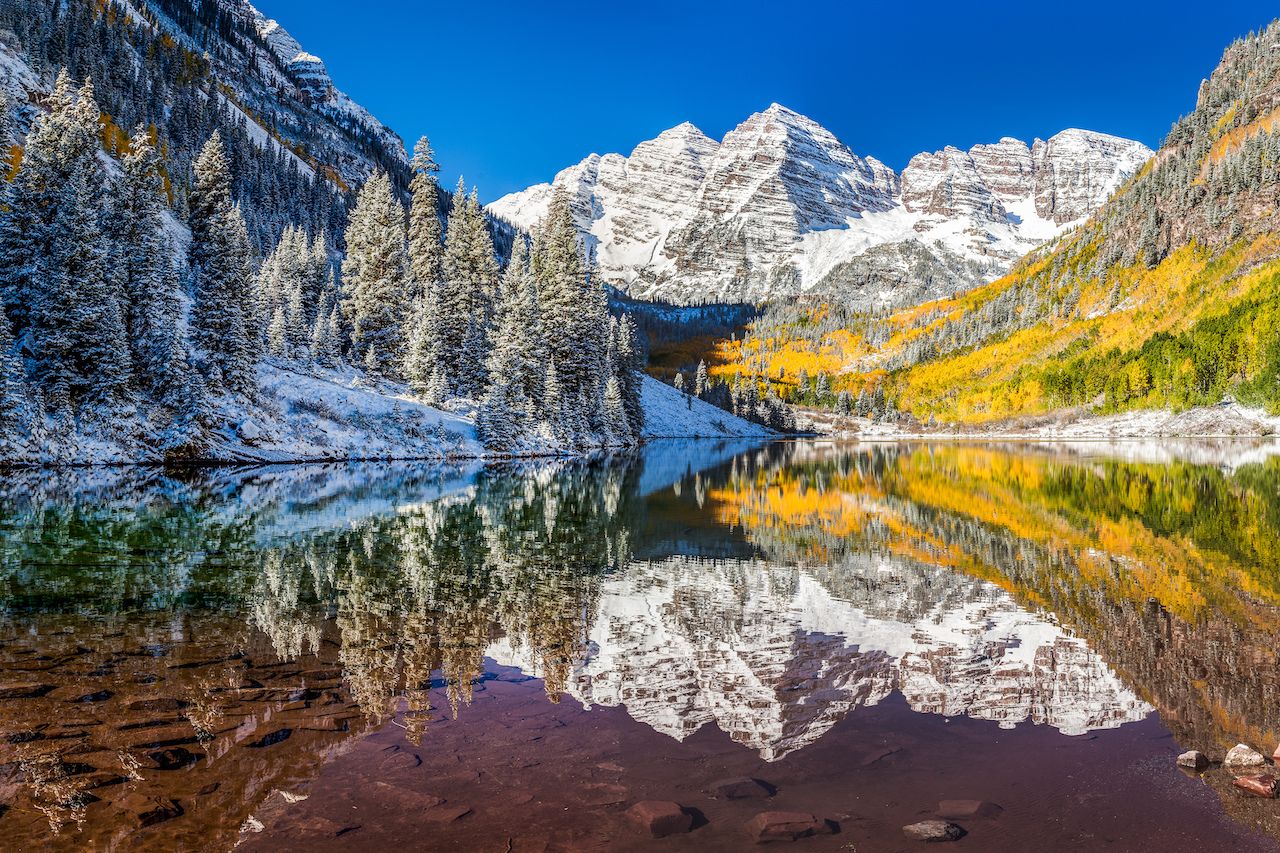 Aspen — Glitz, glamour, and gusto. This is Aspen in a nutshell. But what most guidebooks and movies don’t show is how to crack open that nutshell and get to the core of what actually is a cool place to spend a day. First off, there’s the Maroon Bells, a stunning series of peaks that create perhaps the most scenic pull-off in Colorado. It’s only $10 per vehicle to take it all in, including the numerous hiking trails. Closer to town proper, a solid hike, scenic drive, or good happy hour are totally possible. You just have to know where to look, or else you’ll ask for the tab and realize you just spent $50 on two beers and a basket of fries, and another $100 to rent a bike for the afternoon. Skip the lift ticket to hike Aspen Mountain and instead opt for the free trails at Smuggler Mountain. On the food and bev side, Aspen Brewing Company and Zane’s Tavern are the go-to’s, but you can also channel your inner Hunter S. Thomson with an appearance at the bar inside Hotel Jerome. 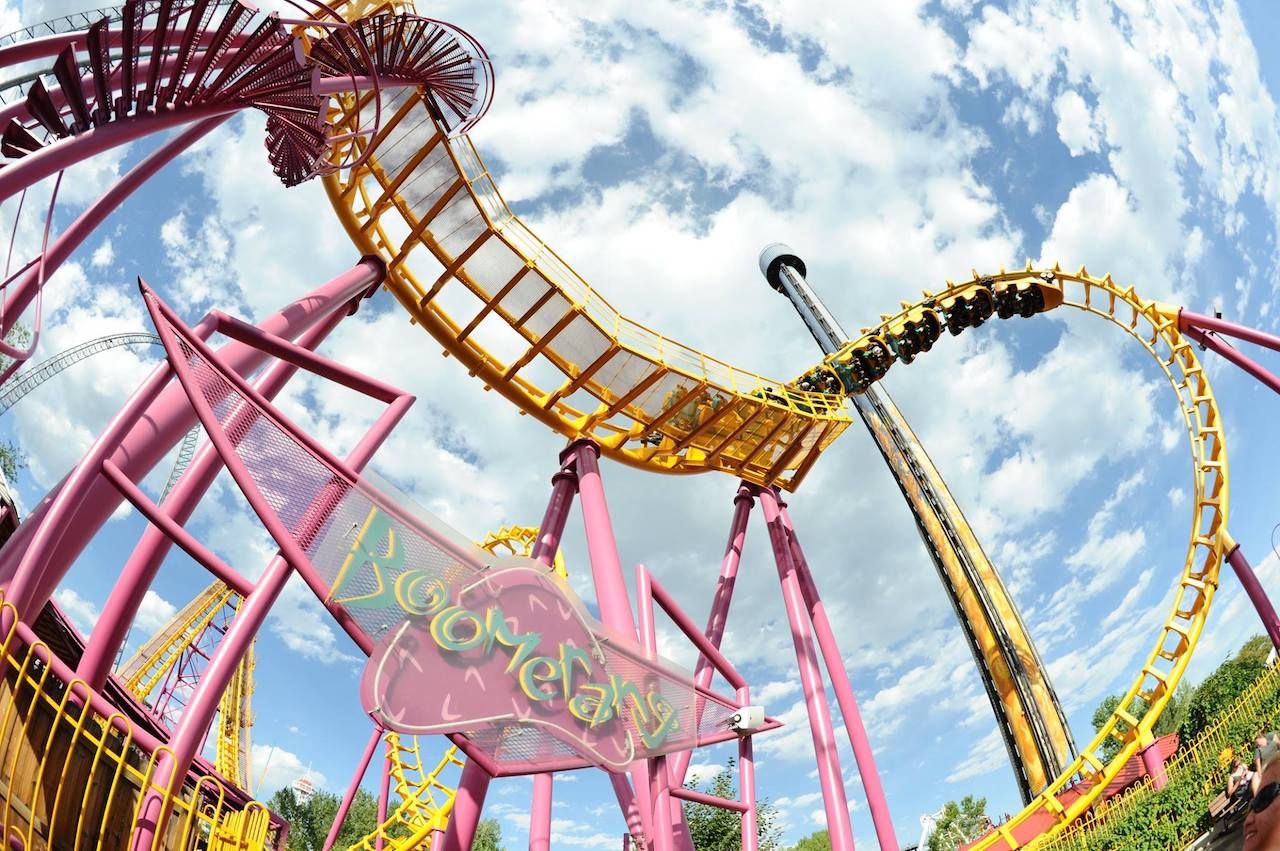 Elitch Gardens — There’s a legend in the Mile High City that says, “Not to see Elitch is not to see Denver.” The long-standing theme park Elitch Gardens, also the only large-scale downtown amusement park in the country, is as much a part of the city’s history as beat poets and the Broncos. Roller coasters and the waterpark are the perfect warm-ups for a night of live music at Red Rocks Amphitheater. The biggest names in nearly every genre stop at Red Rocks on their summer tours, and with towering rocks on both sides of the theater, mountain views behind, and the city skyline above the stage, it’s nothing short of breathtaking. Stop for dinner at the nearby Morrison Inn before the show. If a nightcap is in order, Jose Oshea’s is open late on the way back into town and has a free taco buffet at the upstairs bar.