The Mile High City is among the fittest in the country, and it takes little more than a stroll through Wash Park or a jaunt up the trails of Golden to see why — Denver gets outside like nobody’s business. The Rocky Mountains flank the city to the west, beckoning to their trails and ski slopes. The nine-to-fivers head en masse up I-70 into the mountains on Friday evening, swarming back on Sunday afternoons and clogging traffic in the process. Fortunately for your visit, there are plenty of ways to get outside within city limits. For every craft beer in Denver, there’s a bike lane; and, for every margarita, a moment in the sun. Here’s how to get out and take advantage of the 300 days of sunshine Denver gets each year. 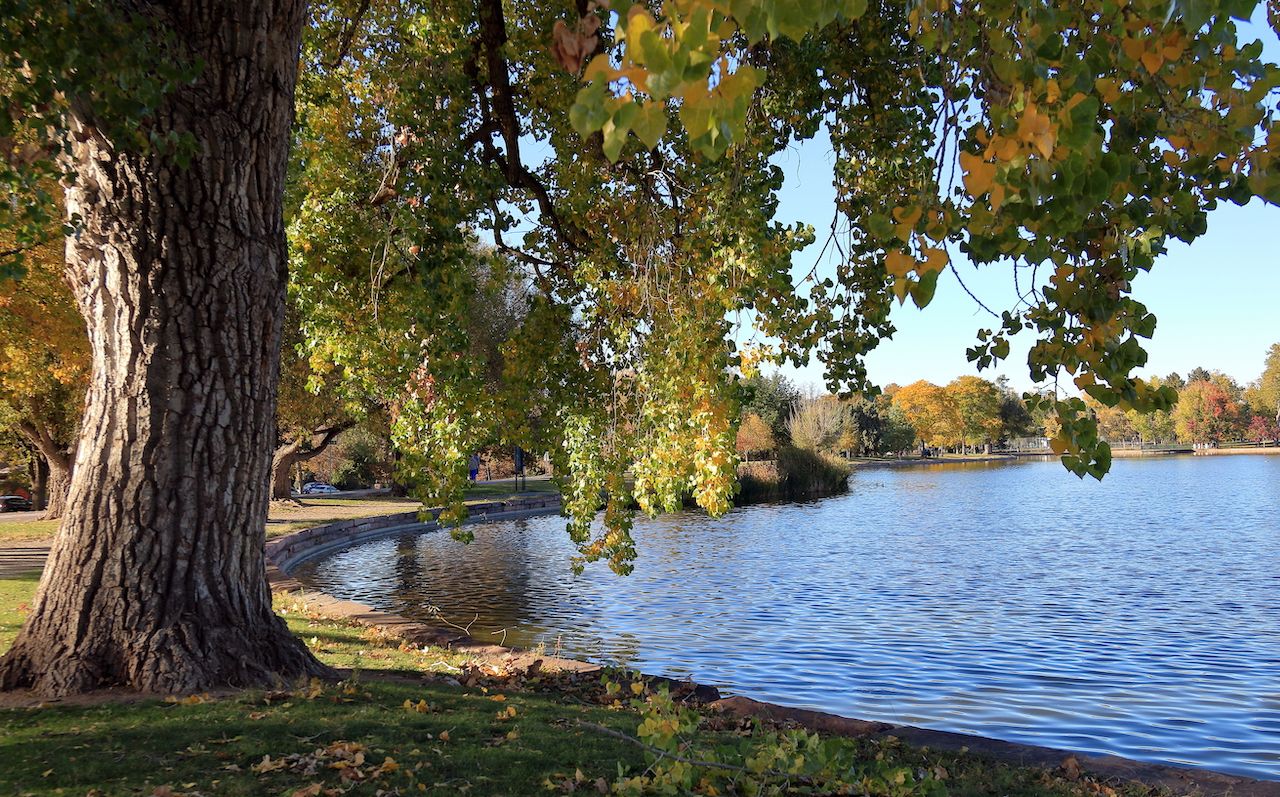 Washington Park — Wash Park, as locals call it, is the Mile High City’s pint-sized answer to New York’s Central Park. Long and skinny, the park has multiple trail options for joggers and bikers, a croquet court, and a large playground for the kids. West of the playground, a beautifully tended flower garden lined with winding paths is one of the most calming spots in the city. On weekends, the park’s grassy areas fill up with volleyball nets and camping chairs. Alternatively, take a pedal boat out on Smith Lake or just sit down on a park bench with a good book. You’ll be able to look up and take in the mountains to the west.

Ruby Hill Park — Ruby Hill Park offers an incredible view of Denver from just west of the South Platte River in the Overland neighborhood. In winter, a ski and snowboard rail yard takes over a portion of this massive park, making for a strong — and free — place to hone your jibbing skills. In summer, you can catch weekly free concerts and a heavy lineup of national touring artists at the newly opened Levitt Pavilion, a grassy, outdoor amphitheater and event venue. 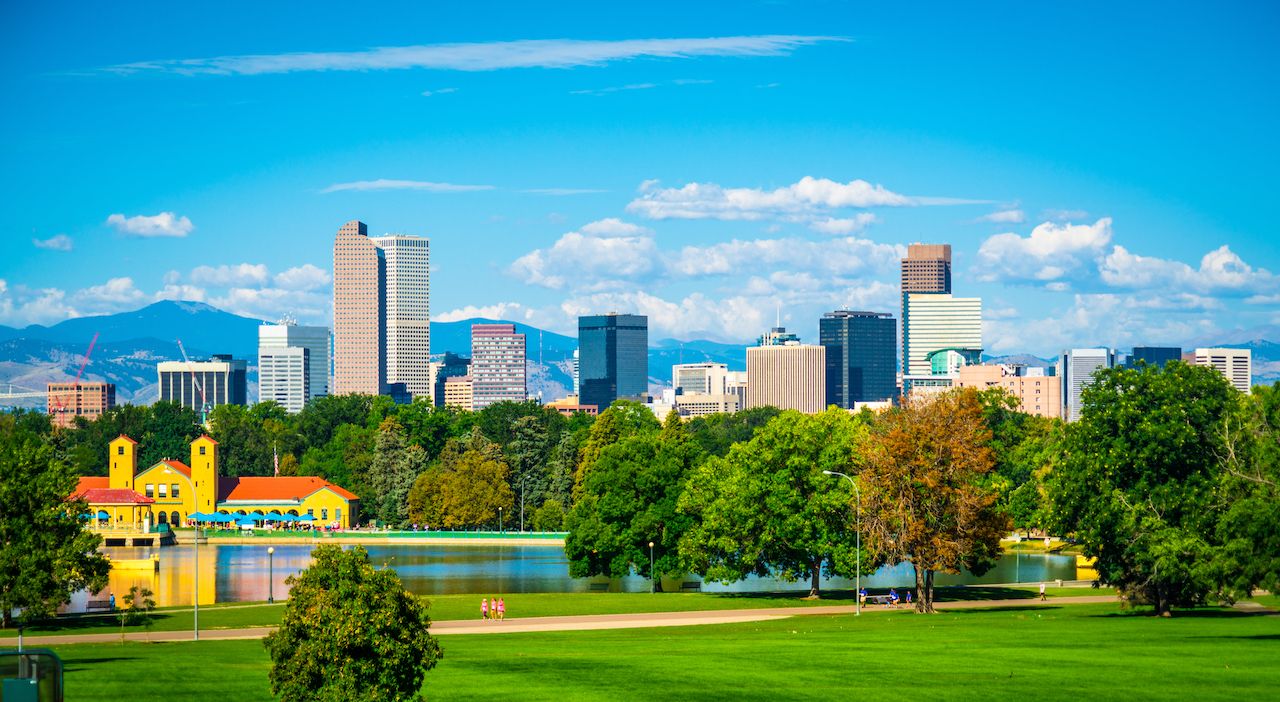 City Park — East of downtown, City Park is not only beautiful for a jog or walk, but it’s also home to the Denver Zoo and the Denver Museum of Nature & Science. You’ll also find a large lake with pedal boat rentals, paved trails, tennis courts, and the City Park Golf Course. If you need a skyline photo for your social feed, this is the place to take it because you’re blessed with a great angle of the trademark “mailbox building,” with towering mountains as the backdrop. On that note, there’s also no better spot in the city to watch the sunset.

Cherry Creek Trail — Denver’s favorite biking and running path winds along Cherry Creek from the southeast suburbs into downtown. You can push it as long as you can handle, and if you make it all the way to the south terminus you’re rewarded with the beaches of Cherry Creek State Park. Heading the opposite direction is an excellent way to skip the traffic into downtown if you’re staying on the south side of the city. There are exits off the trail onto many major thoroughfares along the way. 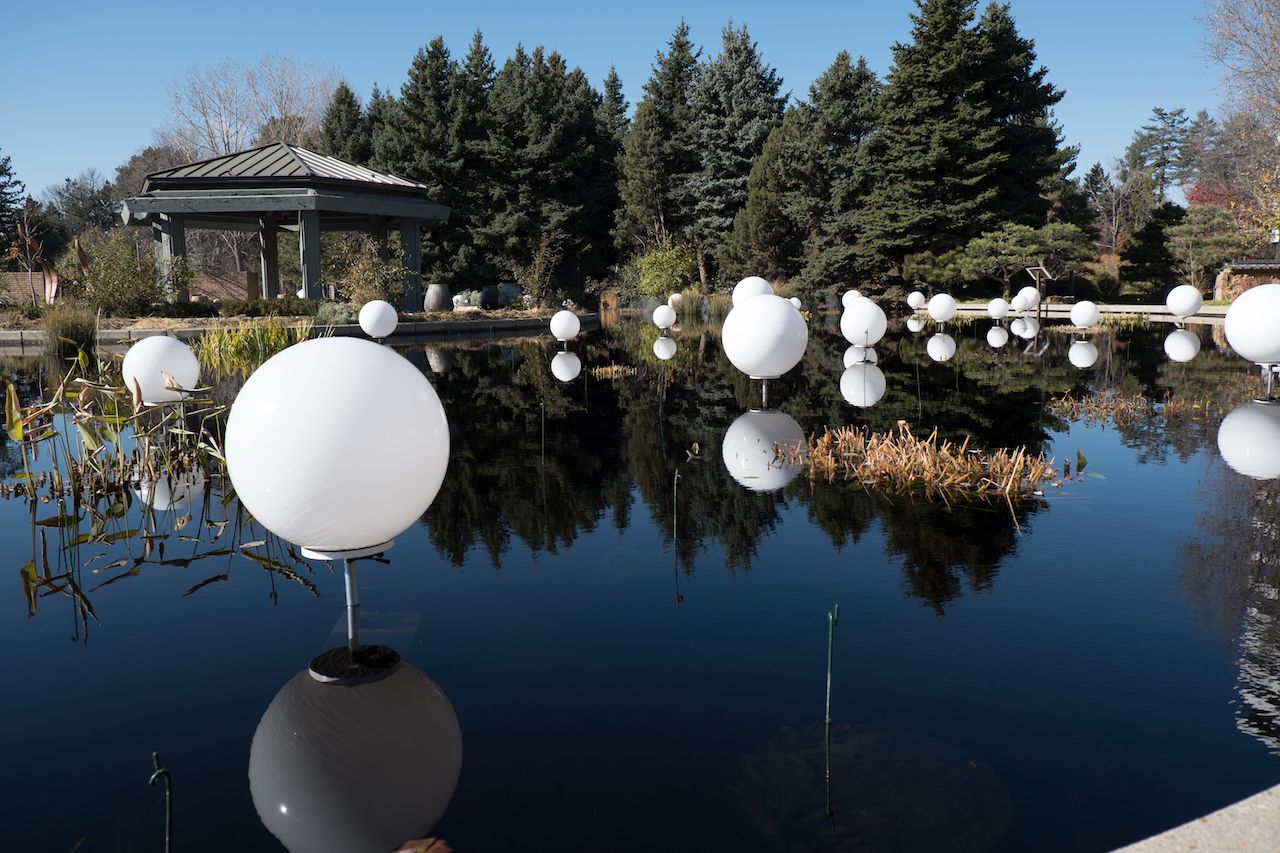 Cheesman Park & Denver Botanic Gardens — South of City Park and across Colfax Avenue you’ll find one of Denver’s liveliest parks and one of its most popular attractions. The Denver Botanic Gardens are much more than their name would suggest. With flowers from around the world, the gardens are the highlight, but guests also enjoy plant-centric exhibits and displays, art shows, live performances, and an acclaimed summer music series featuring well-known musicians from a variety of genres.

South Platte Riverfront parks — A series of interconnected parks border the South Platte River as it flows through downtown Denver. Confluence Park features a white-water rafting course, while you can walk or jog through the winding paths of Commons Park. You can also check out Centennial Gardens and take advantage of the country’s only downtown amusement park, Elitch Gardens, open from May through Halloween. 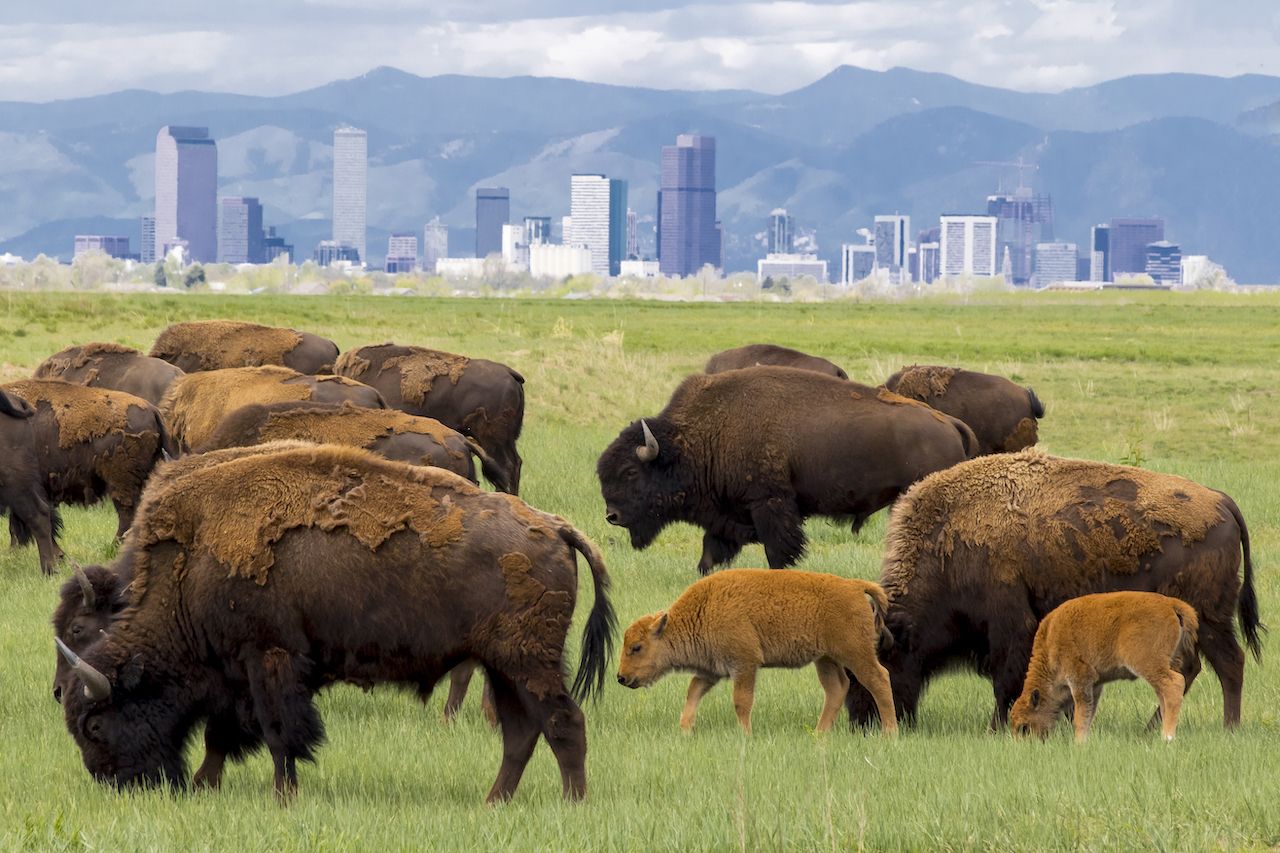 Rocky Mountain Arsenal — This one’s for the wildlife lovers. While you’re likely to spot deer, bison, and elk if you head into the hills — you’re all but guaranteed to see them at the Wildlife Loop at Rocky Mountain Arsenal. You’ll also see hawks, coyotes, and more, and it’s a mere 11-mile drive from downtown. Ten miles of hiking trails also beckon anyone who wants to get out of the car and explore further.

Hayden Green Mountain Park — Hiking and biking trails often come to mind when one thinks of Denver. Hayden Green Mountain Park is a mountain oasis within the metro area, offering 2,400 acres of trails and open space — so you don’t even need to leave the city to get a taste of the epic views and pristine trails you see all over the web. Take a photo of the downtown skyline to the east, then turn around and snap a shot of Red Rocks and the mountains to the west. 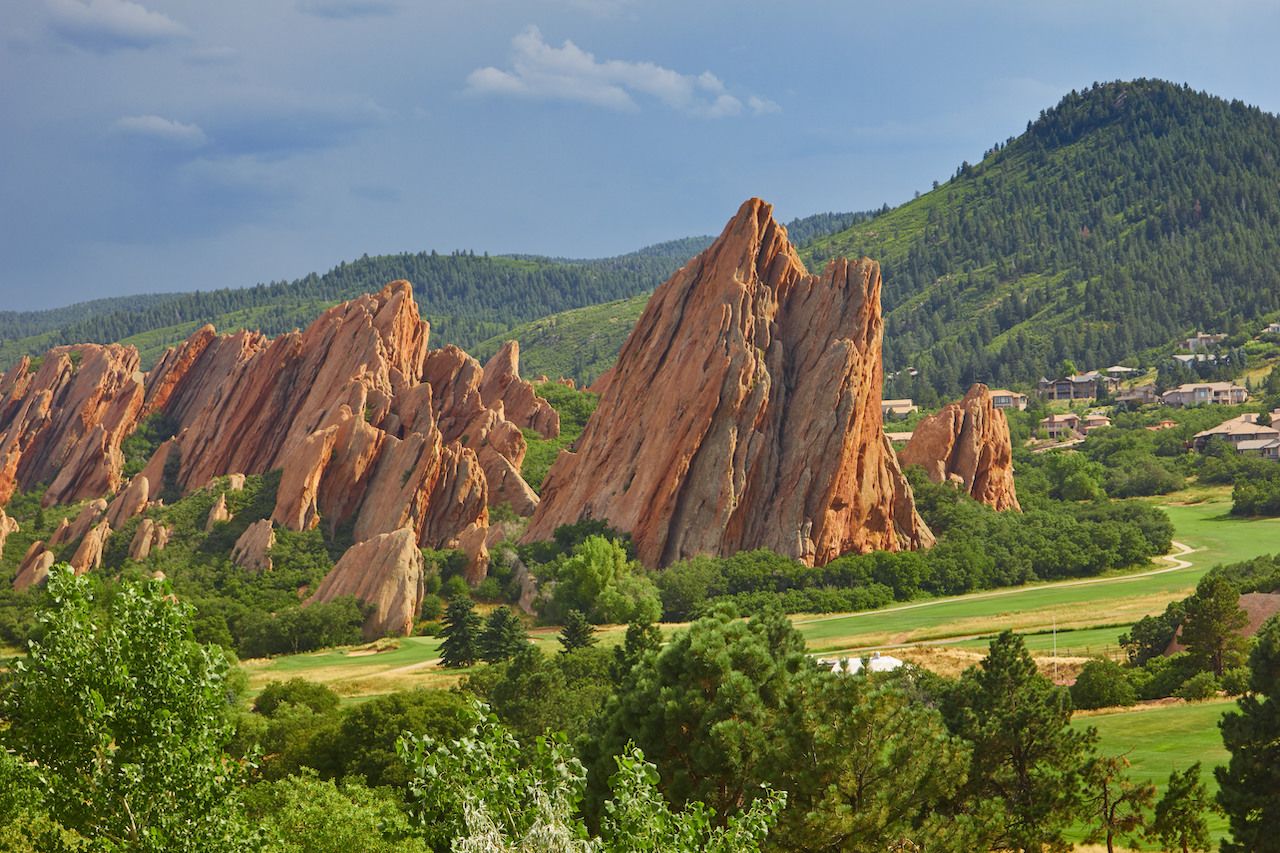 Chatfield and Roxborough State Parks — Cruise on a boat, SUP, or kayak on Chatfield Reservoir. Go for a swim with the kids at the beach or head out on hiking and biking trails winding past towering red rock formations. If you want to spend the night, there are three campgrounds onsite. This sounds like a place you might find high up in the hills, but both are within the metro area and easily accessed by C-470, the loop road that encircles about three-quarters of the Denver area.

Colorado Trail — If you’re up for a challenge, try hiking your way across the state. Starting in the suburb of Littleton, the Colorado Trail is a backpacking trail that traverses 486 miles to Durango. It takes a minimum of one month and requires ample gear and backcountry knowledge. But, hey, Denver’s a great place to pick up such knowledge, and since so many people come here and never leave, hiking the Colorado Trail may well be in your future plans.