Layovers can be brutal. Stuck, often for hours, in an uncomfortable chair trying your damnedest to read or zone out on your headphones. Time goes on, and you finally give up on catching any rest and proceed to hunch over an overpriced, mass-produced beer in a dim and dodgy airport lounge. But many public spaces are evolving these days, and a handful of major international airports are leading the charge in giving us more to do than feel anxious about our flights. If you must have a layover, long enough to incite fear but not long enough to head into town for the day, try to do it in one of these five seriously entertaining airports. 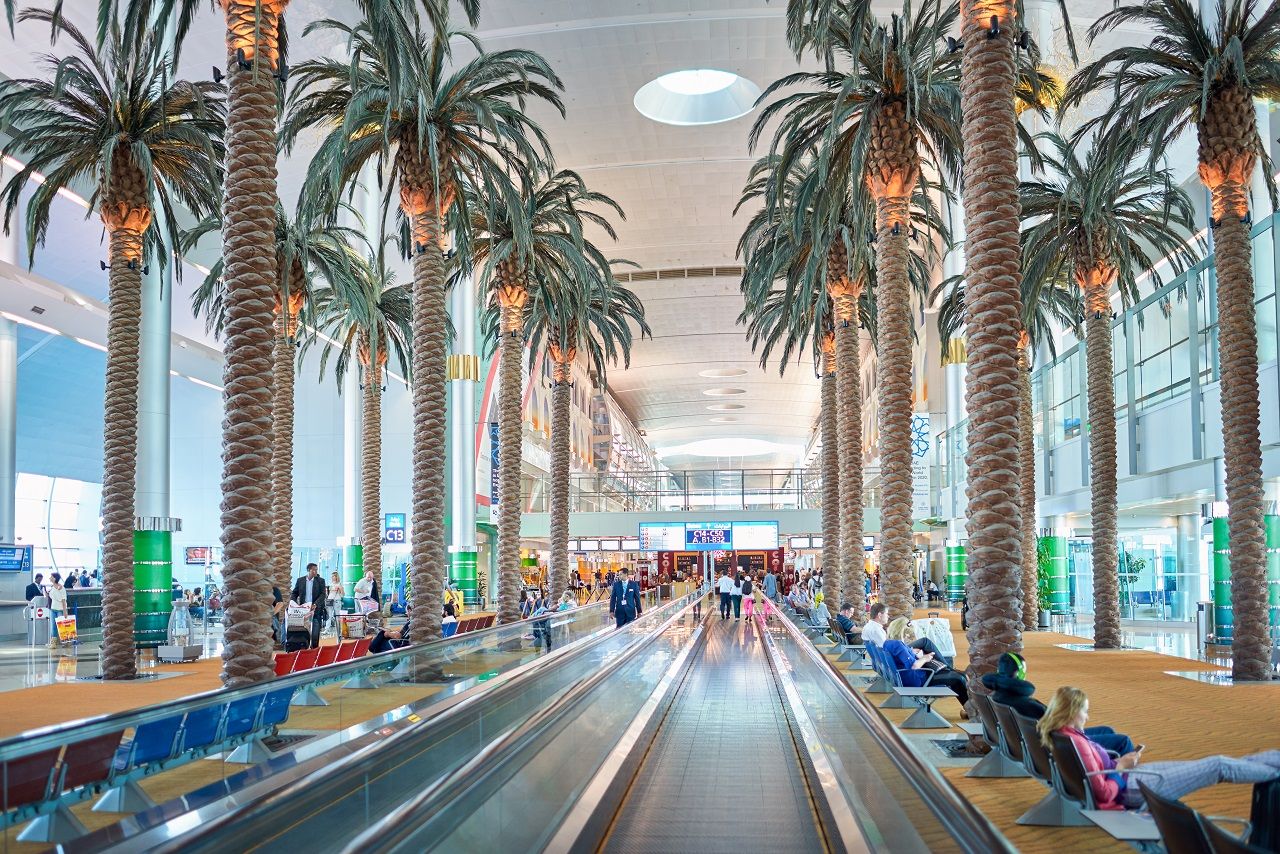 If ever a city went out of their way to be over the top it’s Dubai, and their airport is no exception. The grand terminals set the stage for an airport experience that will have you wishing you arrived much earlier because there’s simply no way to take everything in if you’re in a heated rush to get to the gate. Throughout the airport, there’s ample duty-free shopping, a gym complete with a hot tub, and just about any type of cuisine you could ask for, including everyone’s favorite: Shake Shack. Dubai’s airport authority likes to brag that the airport has its own “cafe culture” and while it’s certainly no Paris, you actually can sit in quite high fashion over a laptop and a latte at a number of spots onsite.

The airport itself is certain to overwhelm those who prefer a quick in-and-out flying experience, but there are a number of places to unwind and recharge, including the high-end Dubai International Terminal Hotel as well as cheaper fixes like the unforgettable SnoozeCubes that are essentially micro-hotel rooms complete with Wi-Fi and a TV. There’s also a zen garden to keep your mind off the fact that you’re about to hurtle through the air, likely over a large body of water, in a giant metal tube. 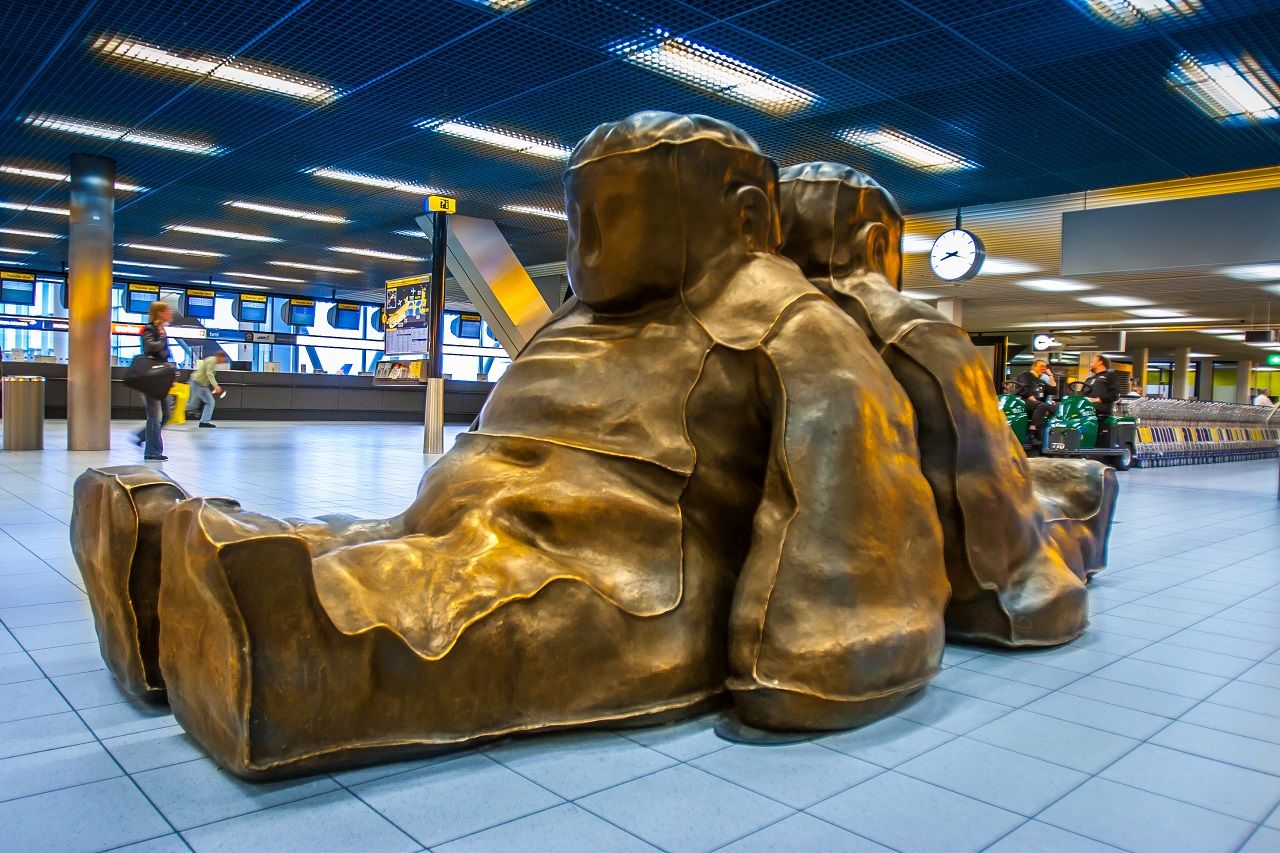 This one’s for the art lovers. Amsterdam’s Schiphol Airport features famous works from the city’s Rijksmuseum in their onsite annex, the first time a top-tier art museum has ever set up a permanent second location inside of an airport. Beyond the Rijksmuseum Amsterdam Schiphol, the airport itself is set in a way that stimulates the senses. You can relieve security-line tension over a massage, indulge in fine Dutch chocolate, and peruse the shops of top European fashion designers and vendors — and they love to reward those that do their research. Deep inside the airport’s website is this voucher for €5 off cosmetics, sunglasses, or a chocolate purchase made onsite.

The dining is on-point as well, highlighted by Kebaya Asian Brasserie and the excellent global brunch options at Leon. The airport has brought in chefs to highlight cuisine from every continent, so odds are you’ll find whatever it is you’re craving. You can even have your food delivered to you at the gate or in a waiting area — a major perk for when you need to settle down and send some emails off before switching over to airplane mode. 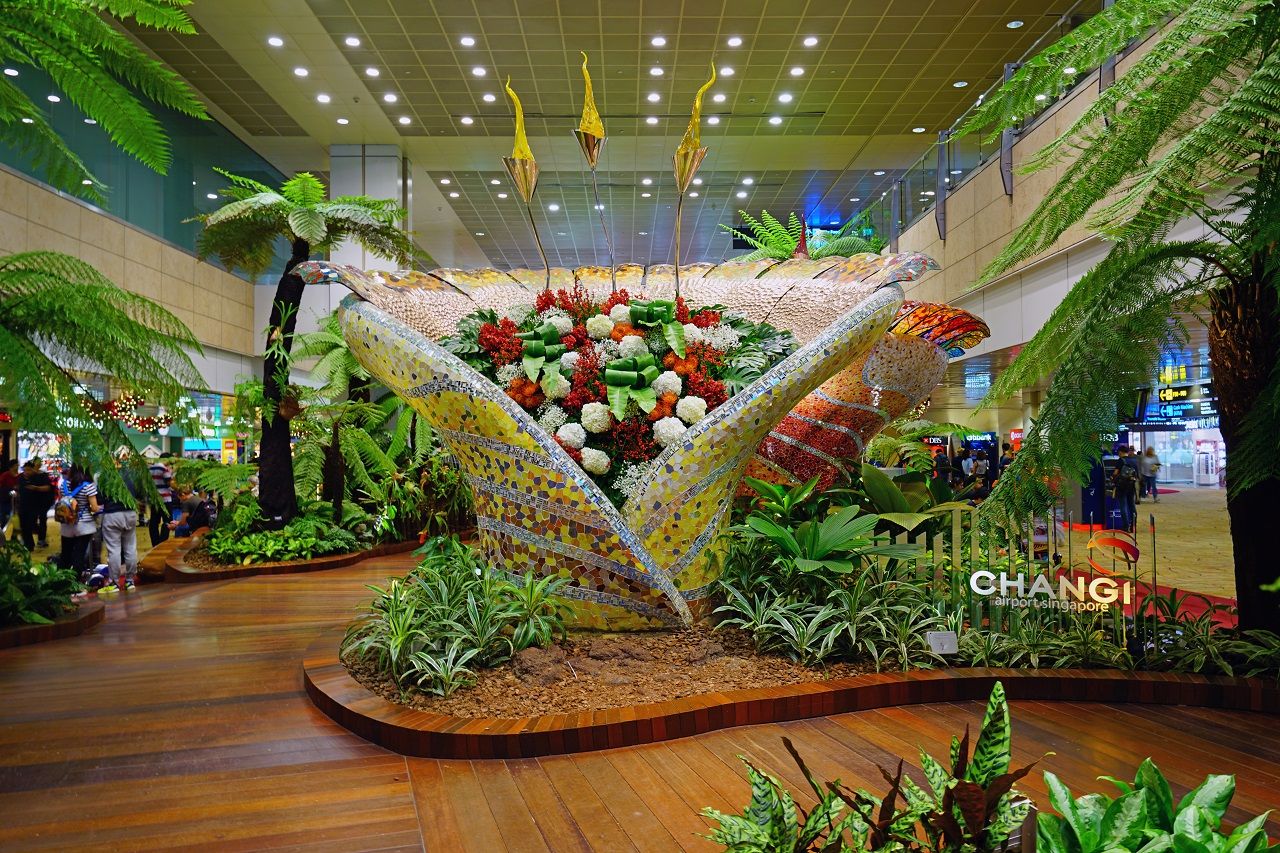 With the city’s legendary architecture and Vegas-esque grandiose, it would be a total buzzkill for Singapore to send travelers on their way without one final epic experience. Fortunately for us all, Changi International Airport ensures that won’t happen. The airport is as clean and welcoming as the city itself, and the napping game is notably strong with sleeper pods and plenty of space to spread out for long layovers. There are also a number of large gardens throughout the facility, such as the incredible Butterfly Garden or Rooftop Cactus Garden. You can check out the Balinese swimming pool at the Ambassador Transit Hotel in Terminal 1, even if you aren’t staying there. Most excitingly, there’s a giant, multi-player video game-like contraption in the lounge area below the second-level food court in the international terminal. 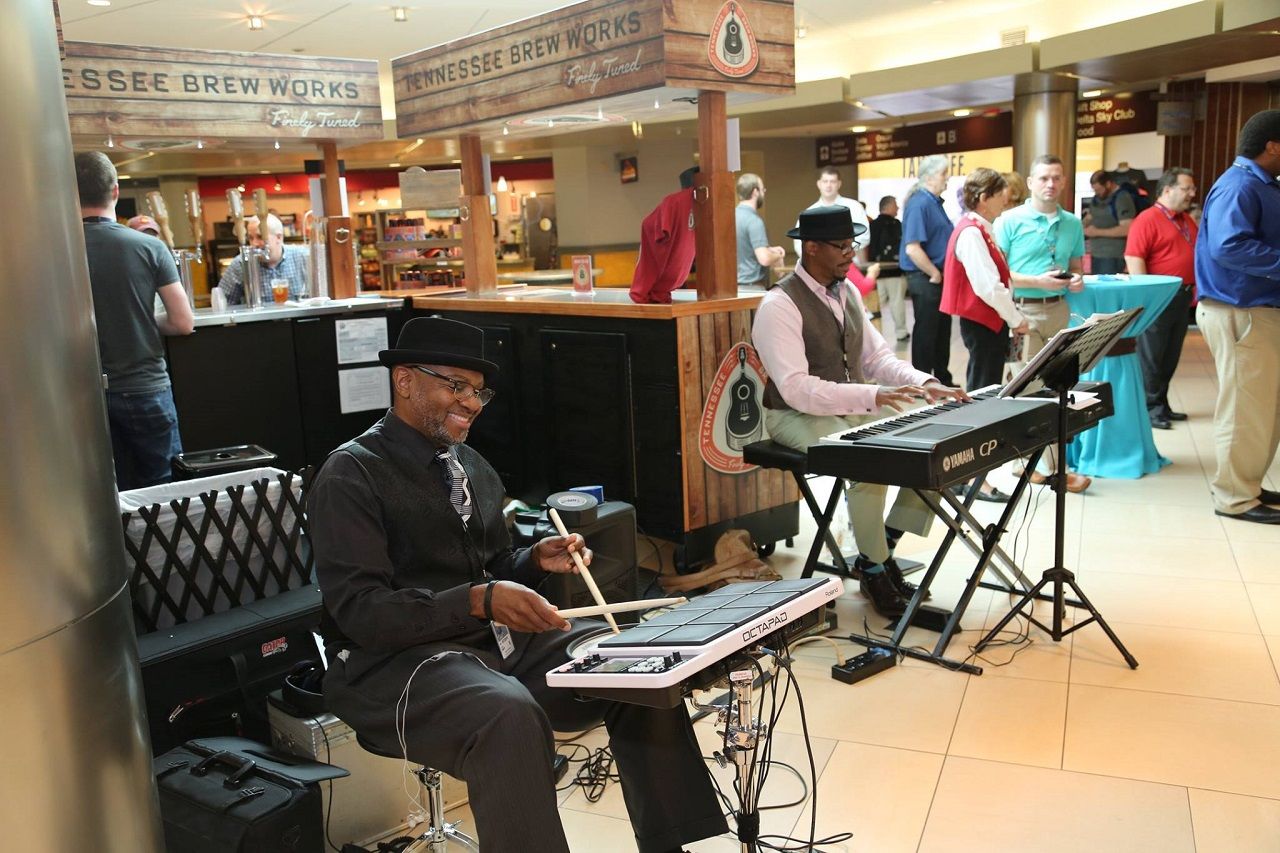 Because Nashville wouldn’t be Nashville if there weren’t a guy on the guitar around every corner, there is, of course, plenty of live music at BNA. The airport has a music scene all its own, hosting local musicians on the regular across four stages set throughout the property. It also has a bit of a bar scene too, with a number of spots to sit over a drink and chat up your fellow travelers or just take in the sights. Here’s the schedule to see who’s playing on your travel day.

If music isn’t your thing, the airport has solid food options that go beyond southern fried chicken. Noshville Delicatessen in the A/B food court is a great place to start, and local staple Whitt’s Barbecue is posted up on Concourse C for your smoked meat fix. The museum also hosts rotating art exhibitions typically highlighting the work of one specific artist and alternates decor throughout the airport to reflect what’s hot around town, from music festivals to cultural events. 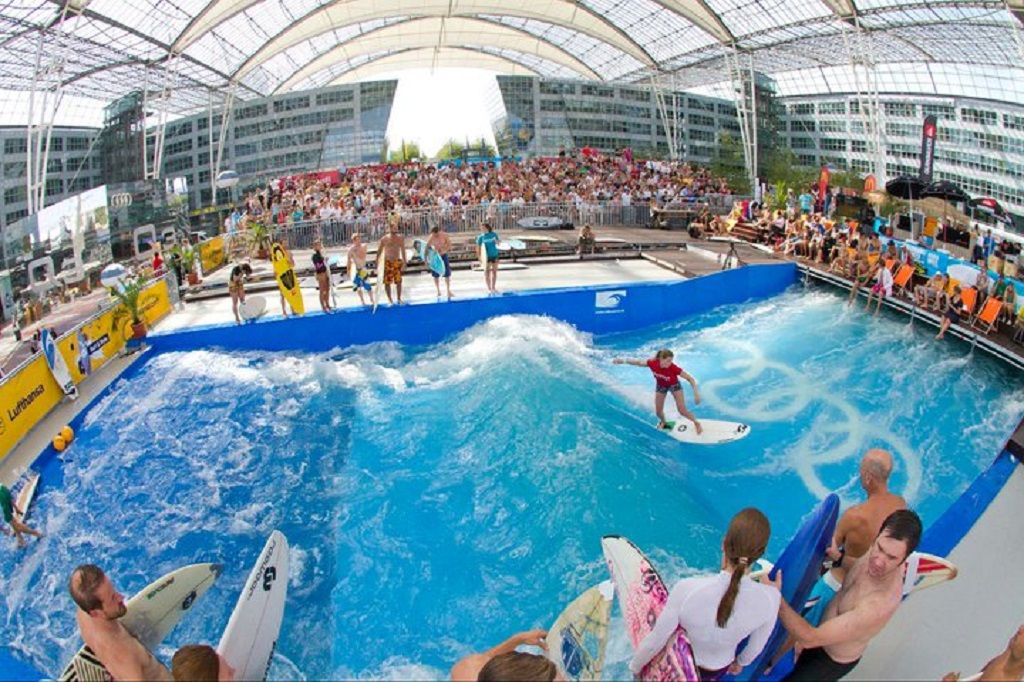 Munich Airport has two big, bold claims to fame. First, it’s home to Europe’s largest roofed-in beer garden, aptly dubbed Airbraeu. You can enjoy a pint, schnitzel, and, if you’re there at the right time, a bit of live music. For those already reeling from a beer-soaked trip, you can also just walk around the terminal and gaze in awe at the airport’s stunning architectural design. Built to incorporate glasswork and vast, expansive beams and structures, it’s sure to give your neck a stretch and help clear the fog out of your head.

Second, you might just bump into Kelly Slater while waiting for your flight. Despite its location in south Germany and nowhere near anything resembling an ocean, Munich Airport has become one of Germany’s most sought-after surfing destinations. A 33-foot-wide artificial wave is set up onsite each fall, and it’s waiting for you to drop in and throw down in front of a crowd of onlookers. Once the leaves have fully turned, surfing gives way to ice skating and a traditional German holiday market in the terminal, complete with vendors, revelry, and maybe even a solid Feuerzangenbowle.