It was April 1966 when the capital of the Uzbek Soviet Socialist Republic was completely destroyed by an earthquake hitting from below the heart of the city. While the USSR had already made itself known for the construction of monumental urban and architectural projects, the challenge of rebuilding Tashkent from the ground up was unprecedented.

In redesigning the city to become a blend of Uzbek heritage and Soviet utopia, the then-socialist government decided to take the opportunity of having to erect a city from scratch to add a rapid transit system unique in its kind. Tashkent’s metro system became the first to be built in the Central Asian republics. On top of being clean and punctual, it boasts some of the most artistically curated stations in the world, complete with carved pillars, golden chandeliers, and intricate mosaics featuring local, historical heroes and myths.

The planning began shortly after the earthquake, in 1968, and the Chilanzar line, the first of three currently active lines, opened over a decade later in 1977. The stations serving those lines are home to some of the best art and architecture in the city, and all you have to do to experience them is hop on a train.

A subway system coming into its own, much like the country behind it 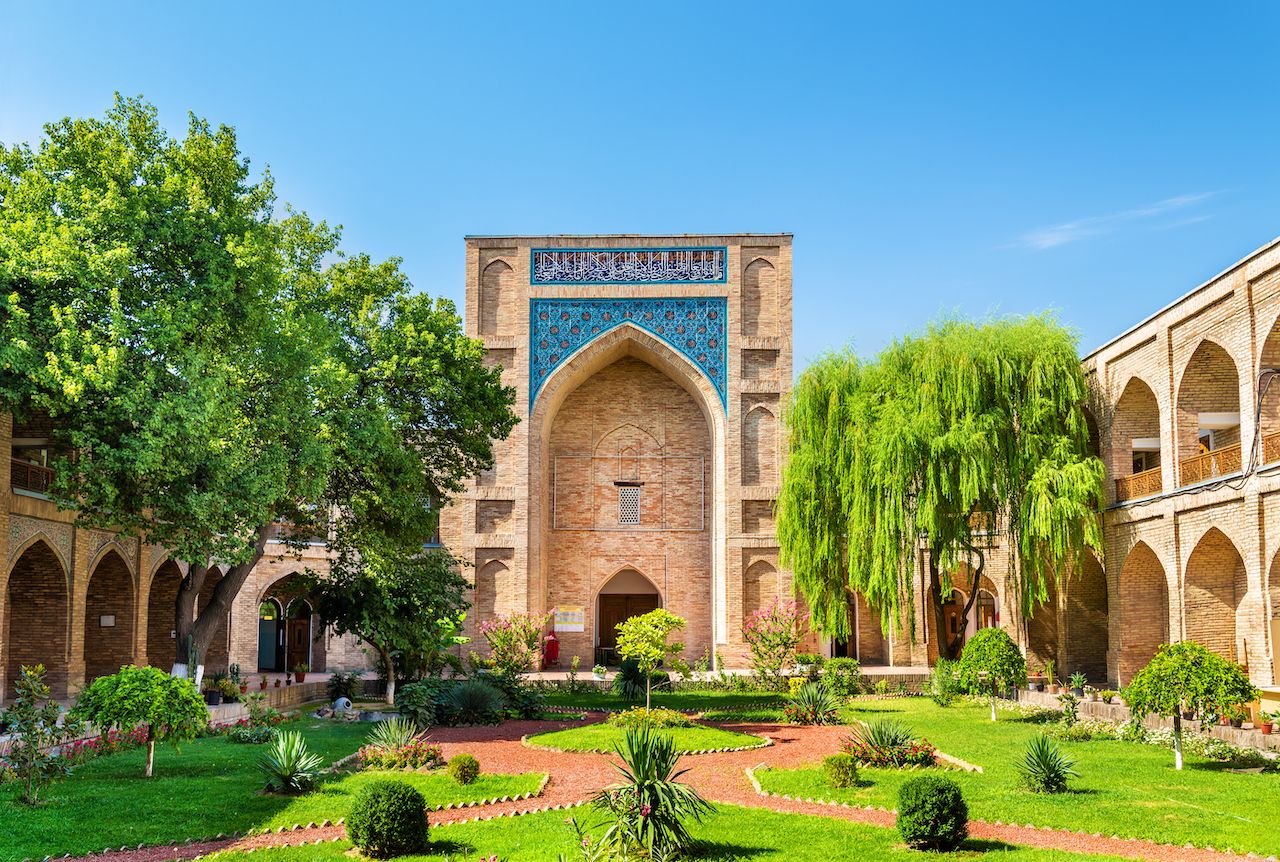 Although Tashkent’s metro has been operating for four decades, it remained under the radar of international tourists until recently because of a ban on photography. Until 2018, taking pictures of the interior of Tashkent’s metro stations was prohibited, as these were considered part of the national security infrastructure, together with bridges and army bases. With the end of President Karimov’s rule, the new government is attempting to exit isolation and open up to foreign visitors, who of course want to take photos of their travels. Tourist visas to visit Uzbekistan are now easier to obtain than ever before, and the beauty of the incredible stations of Tashkent’s metro can now be captured and shared.

There are currently 29 stations in Tashkent’s metro system shared between three lines — the Chilonzor (red) line, the Uzbekistan (blue) line, and the shorter Yunusabad (green) line. A fourth line (the Sergeli line) is planned to open in the near future. The service runs regularly from 5:00 AM to midnight, seven days a week, and you can easily reach most of Tashkent’s attractions without ever needing a taxi. The travel tokens cost 1,200 Uzbekistan soms, about 15 cents in US dollars. Each metro station is decorated individually following a specific theme. Below are the seven most impressive examples of these underground museums in Uzbekistan’s ancient capital. 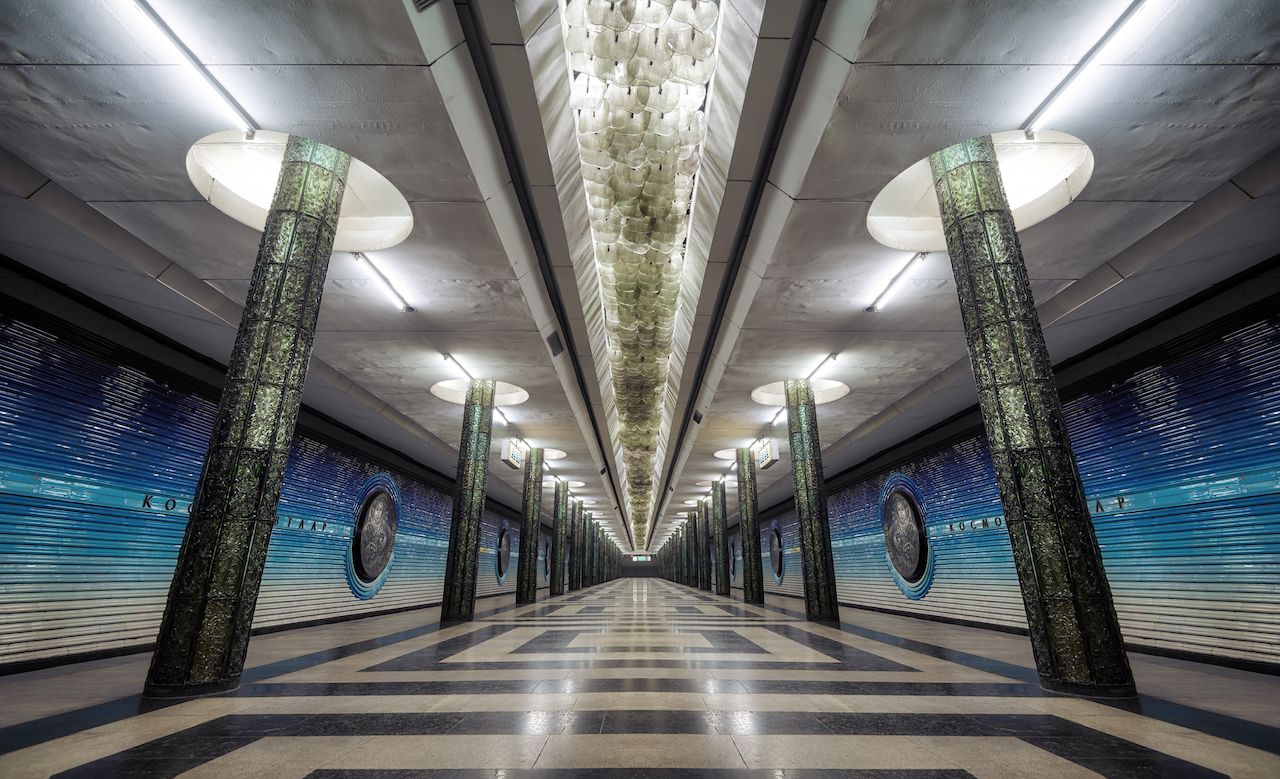 Located south of the city center, the Kosmonavtlar metro station emanates Soviet nostalgia from every tile. This station was built to commemorate the cosmonauts of the Soviet Union and celebrate the scientific breakthroughs of the Communist Federation in space travel. The station is decorated with sky-blue linear mosaics that cover the walls around metallic columns, with a portrait of Valentina Tereshkova, the first woman in space, watching from behind the rails. The Kosmonavtlar station is steps away from the Republican Puppet Theater and the White Palace that was once the residence of President Islam Karimov, now a historical museum. 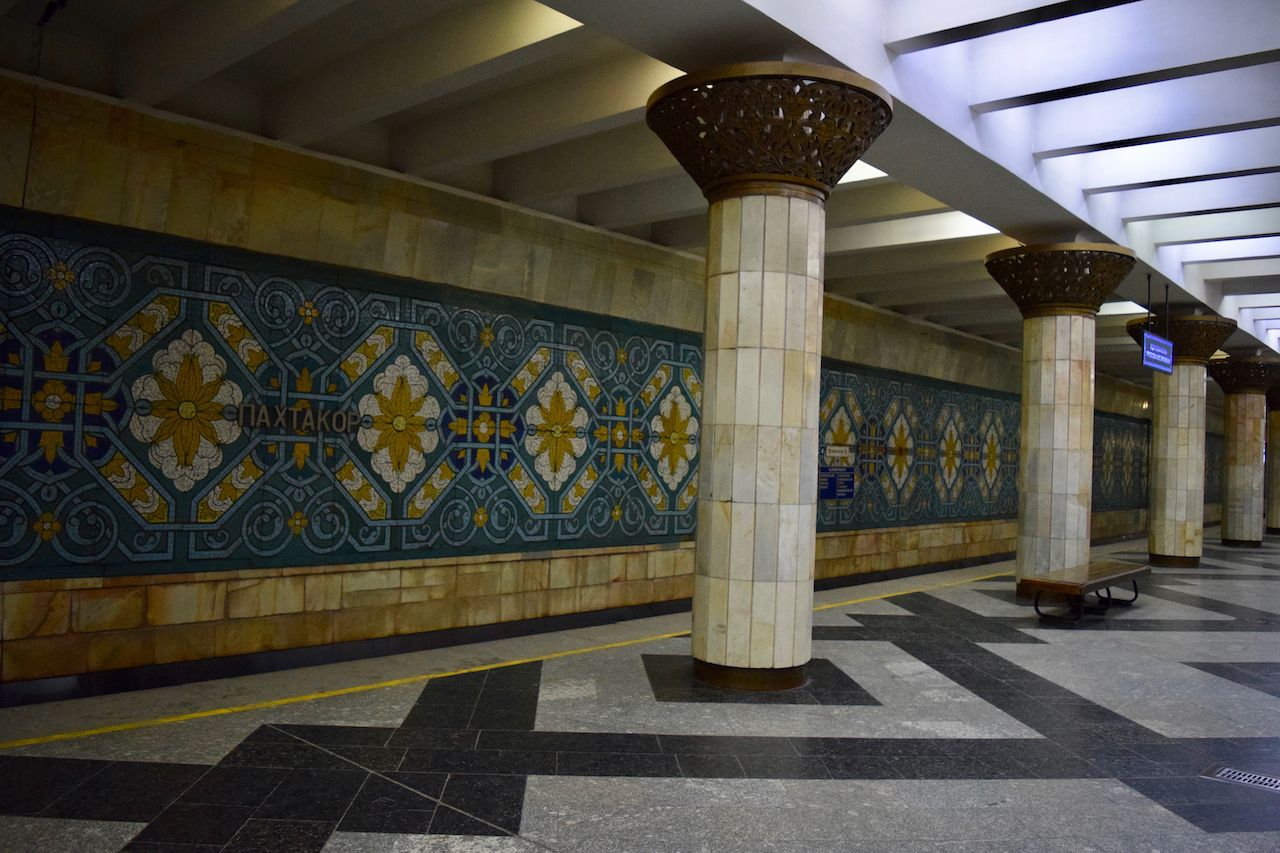 The Pakhtakor station pays tribute to Uzbekistan’s cotton industry, which played a central role in the country’s economy for decades and continues to do so today. The cotton plants are reproduced on the wall of the station in intricate green and blue mosaics while elegant marble columns align on the waiting platform.

Uzbekistan is one of the largest cotton exporters in the world; however, this is not due to the entrepreneurial skills of its farmers. In past decades, the country has faced many accusations of human rights infringement because of the system on which cotton production is based. According to the Human Rights Watch, every year people of all ages, including children, are forced to leave their homes (and jobs) to go pick cotton in the fields that farmers are obliged to cultivate.

As reported in a 115-page report entitled “We Can’t Refuse to Pick Cotton: Forced and Child Labor Linked to World Bank Group Investments in Uzbekistan,” the government threatens to fire people, stop welfare payments, and suspend or expel students if they refuse to work in the cotton fields. The new government has promised reforms of its forced labor system following a pledge of 274 companies to not source cotton from Uzbekistan until the situation changes. 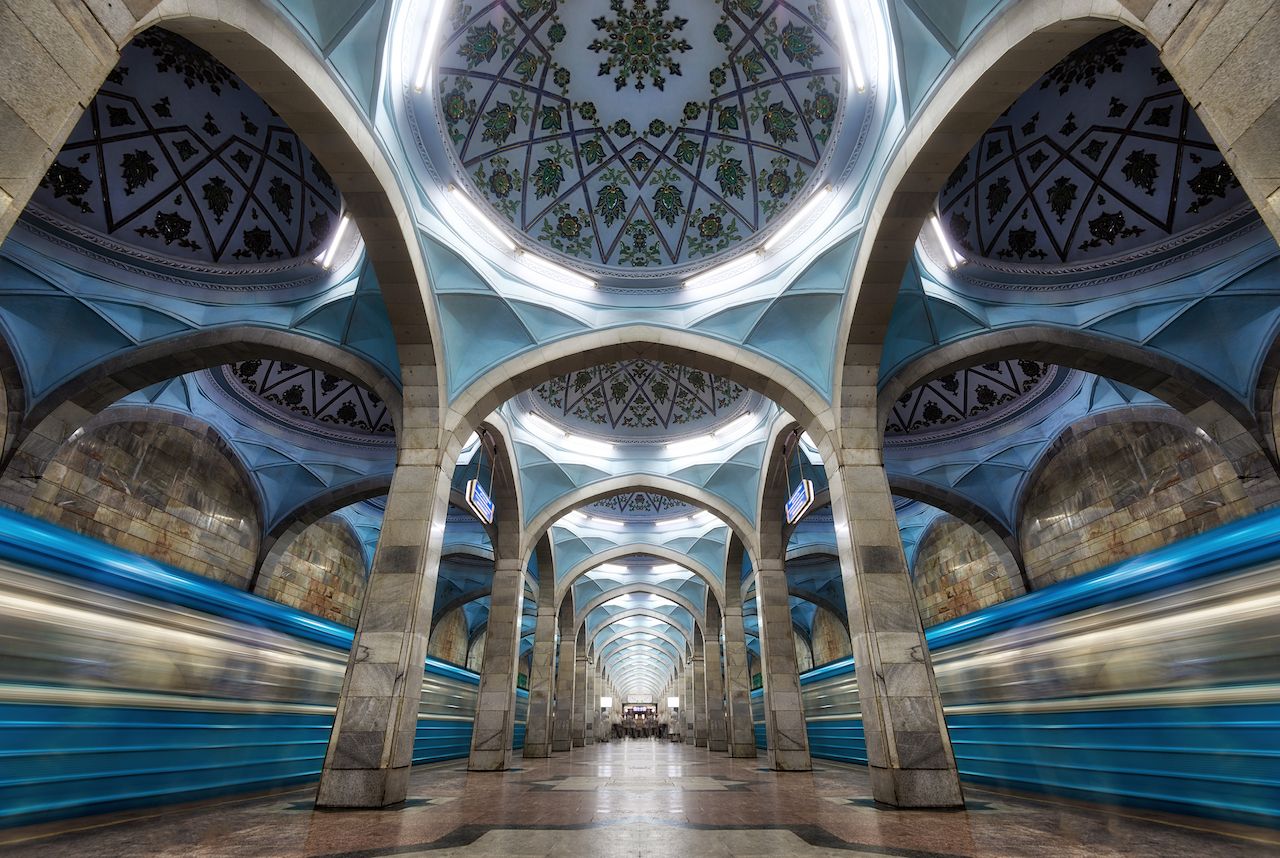 The station dedicated to Muslim poet Alisher Navoi might not look like much from the outside, but once you walk past the ticket booths, you are greeted by high columns and a perfectly symmetrical domed ceiling decorated with flowery patterns. You can also admire the walls where scenes inspired by the stories of the 15th-century poet are depicted.

Alisher Navoi station was completed only in 1997 and is found at the intersection of the Uzbekistan (blue) line and the Chilonzor (red) line in central Tashkent. It is positioned in front of the Youth Theater of Uzbekistan and minutes away from the Museum of Communication History of Uzbekistan, providing insight on how communication across different corners of Central Asia took place before road and rail networks existed. 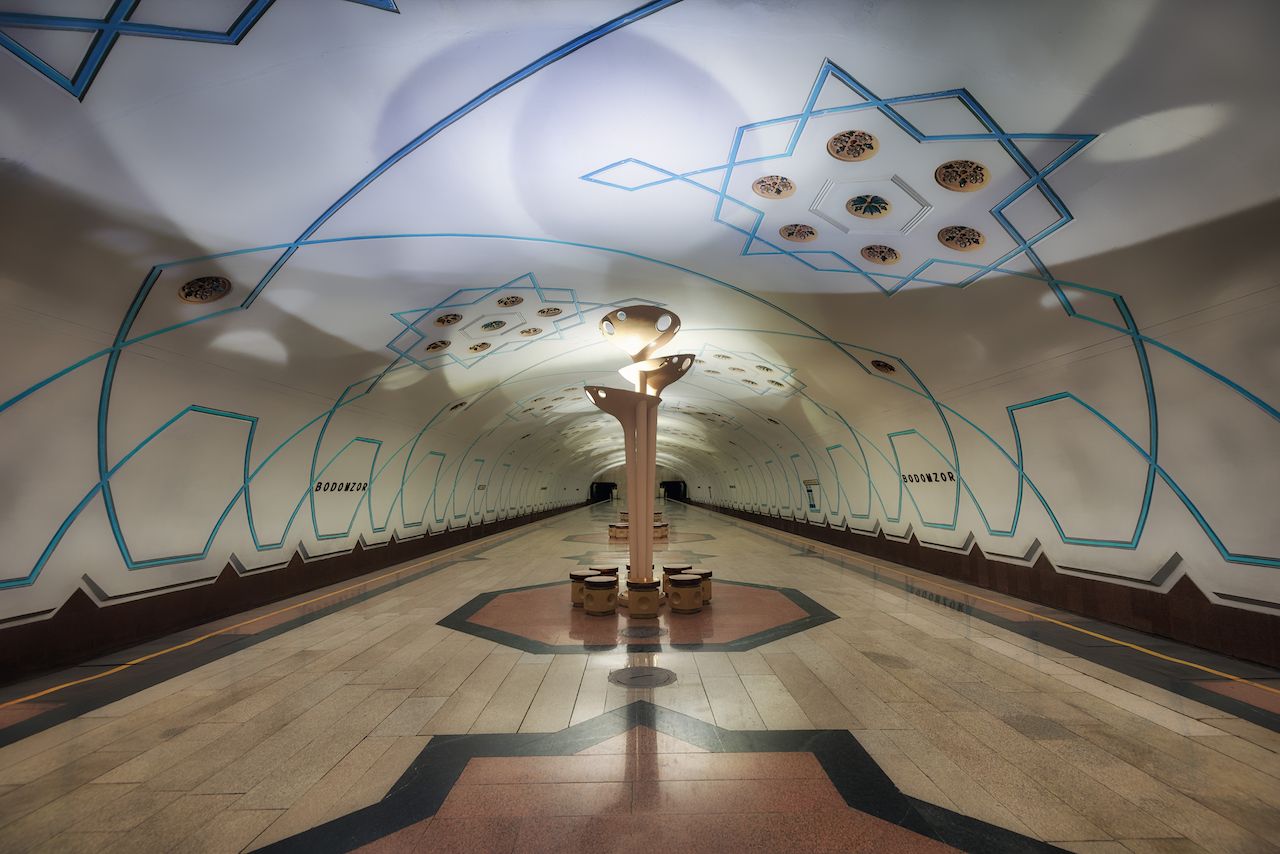 Right in Tashklent’s business district and surrounded by the Uzexpocentre Exhibition Halls, the International Business Center, and a collection of luxury hotels is the Bodomzor metro station, one of the newer stations of the city’s subway system. Opened in 2001, the Bodomzor station is perhaps less decadent than those that first opened in the 1970s, but it is still an impressive sight thanks to the geometric patterns that adorn the ceiling and the modern lighting system that make the ample waiting halls look as if they’ve just come out of a science fiction movie. 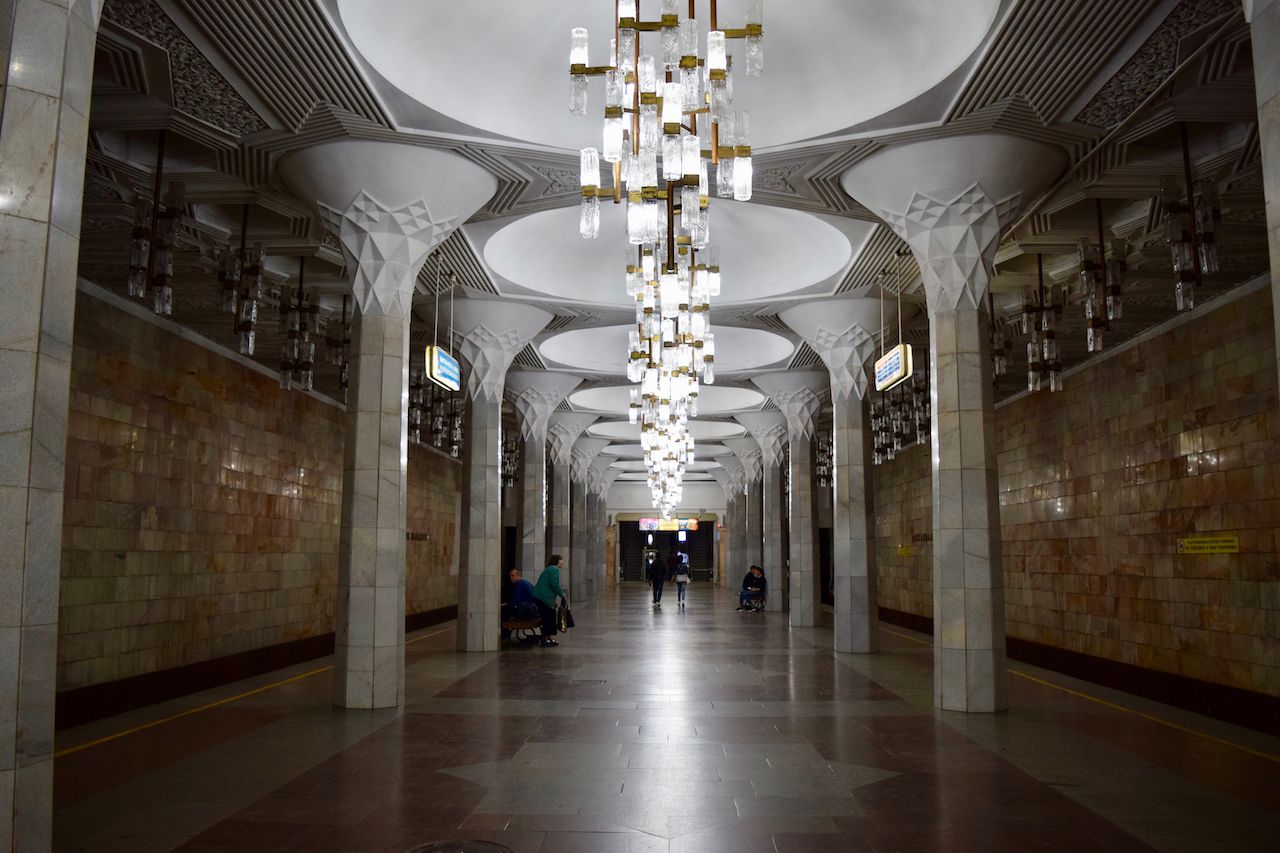 The first of Tashkent’s metro stations to open, Mustakillik Maydoni takes its name from the Independence Square found just above. It is built almost entirely with marble blocks coming from the Kizil Kum desert in Western Uzbekistan and is one of the most opulent stations in the network. The columned hall and glass chandeliers set the atmosphere as you wait for the turquoise trains to arrive. The flooring is decorated with star patterns symbolizing the successes of Soviet space explorers. In Soviet times, Independence Square used to be known as Lenin Square, but following the fall of the USSR, it was renamed Mustakillik Maydoni. The square today holds national festivals and celebrations year-round and is surrounded by modern-looking governmental buildings. 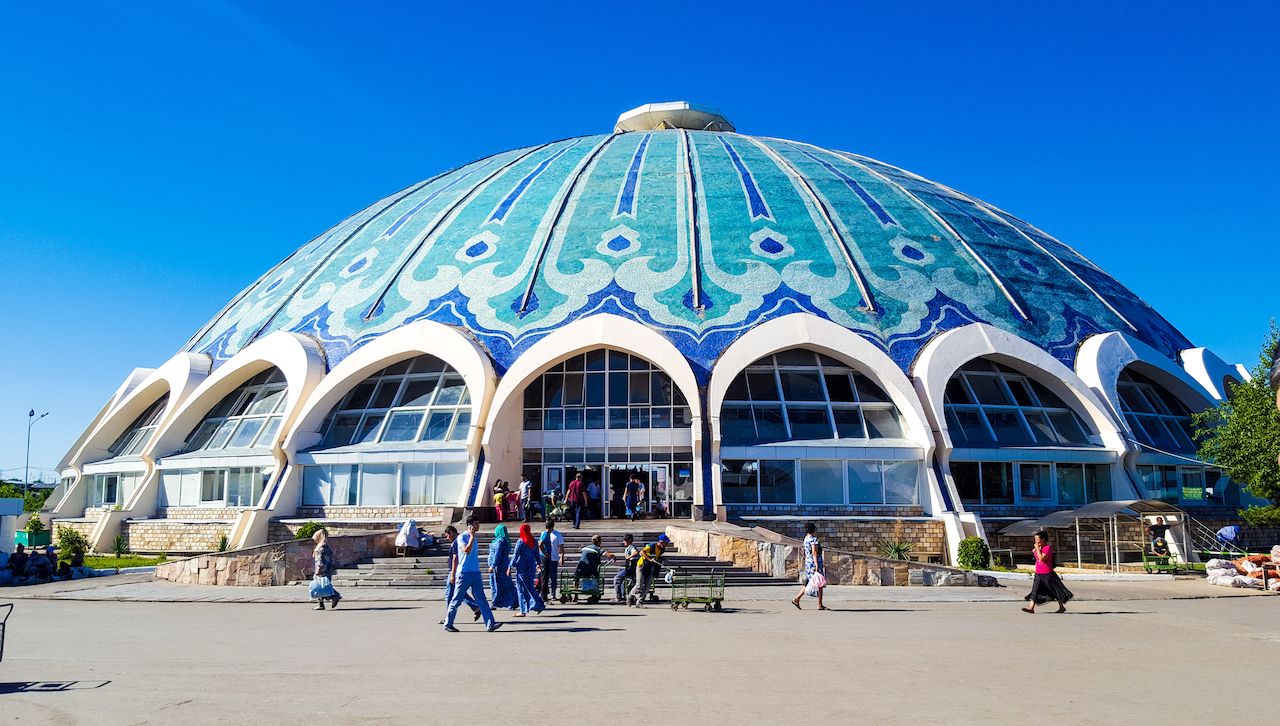 The busy Chorsu station, located northeast of the city center in one of the most heavily trafficked areas of Tashkent, is as impressive below ground as it is on the surface. Opened in November 1989, Chorsu station is built almost entirely with white Gazgan marble and grey granite, with detailed carvings produced by local artists.

When you exit the station you find yourself in front of Chorsu Bazaar, one of the largest food markets in Tashkent. Marking the heart of the trading complex is the massive blue dome decorated with traditional patterns that protects the vendors and their customers from the scorching summer weather. In this bazaar, you can find anything from piles of honeydew melons to towering blocks of local cheese and, of course, the ever-present black market currency exchanges. Minutes away from the market is the Kukeldash Madrasah, the Islamic school originally built in 1570 and converted into a caravanserai two centuries later, then into a museum of atheism during the Soviet era. 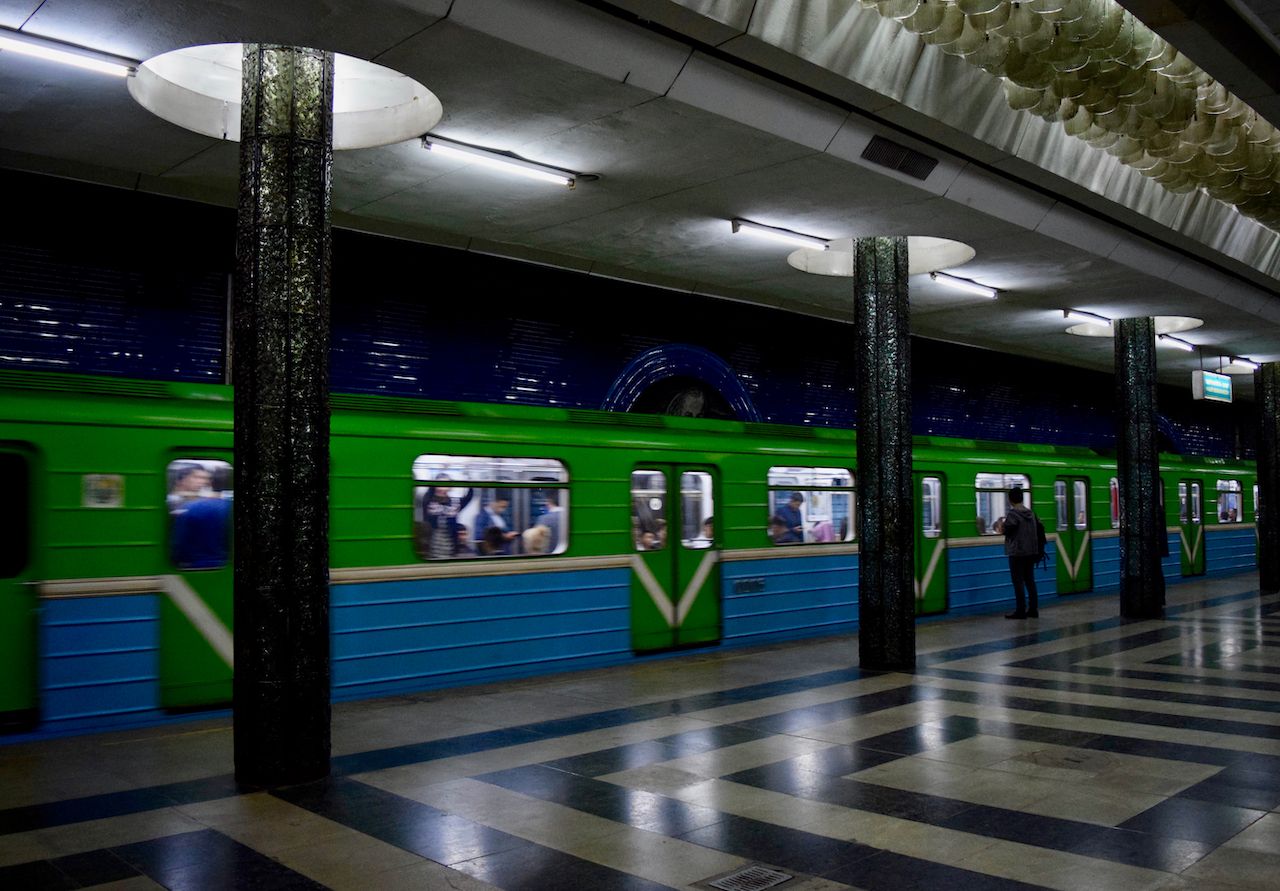 The station that takes the name of the city itself is filled with carvings and images that pay tribute to the founding of Tashkent in the first century BC. At one entrance of the station, the city’s emblem hangs high in the middle of a wide, backlit sculpture of the sun while at the other a blue peacock stands above the head of travelers. Inside, blue and white ceramic compositions show scenes of daily life to celebrate the Uzbek heritage. Tashkent metro station is close to the main railway station and the Mirabad Bazaar, a recently reconstructed market selling mostly fruit and vegetables.

May 25, 2022 Alex Bresler
✖
travelstoke
Download the mobile app
stoked by