sometimes, the best way to view a city or park is from high, high above it. And seaplane tours offer the most unique way to get the best views of numerous cities and waterways throughout America. Seaplanes usually fit about five people, though many companies offer private seaplane tours for couples or groups that want something extra-special.

Being in a plane allows you to see a familiar city from a fresh perspective. And seaplane tours are also a great way to get airborne and have a mini-adventure near home if you don’t have the time or funds to travel overseas. Oh, and you don’t have to worry about lost bags or jet lag.

Flightseeing and single-day charter flights also offer options for fishing, picnicking, bear spotting, whale watching, even alligator viewing, and can take you to places inaccessible by roads. Some tours are just about sightseeing, while others drop you in the middle of remote wilderness areas for a bit of exploration on foot.

With tropical beaches to iconic landmarks, snow-capped mountains, and winding rivers, America is simply awesome from the air. 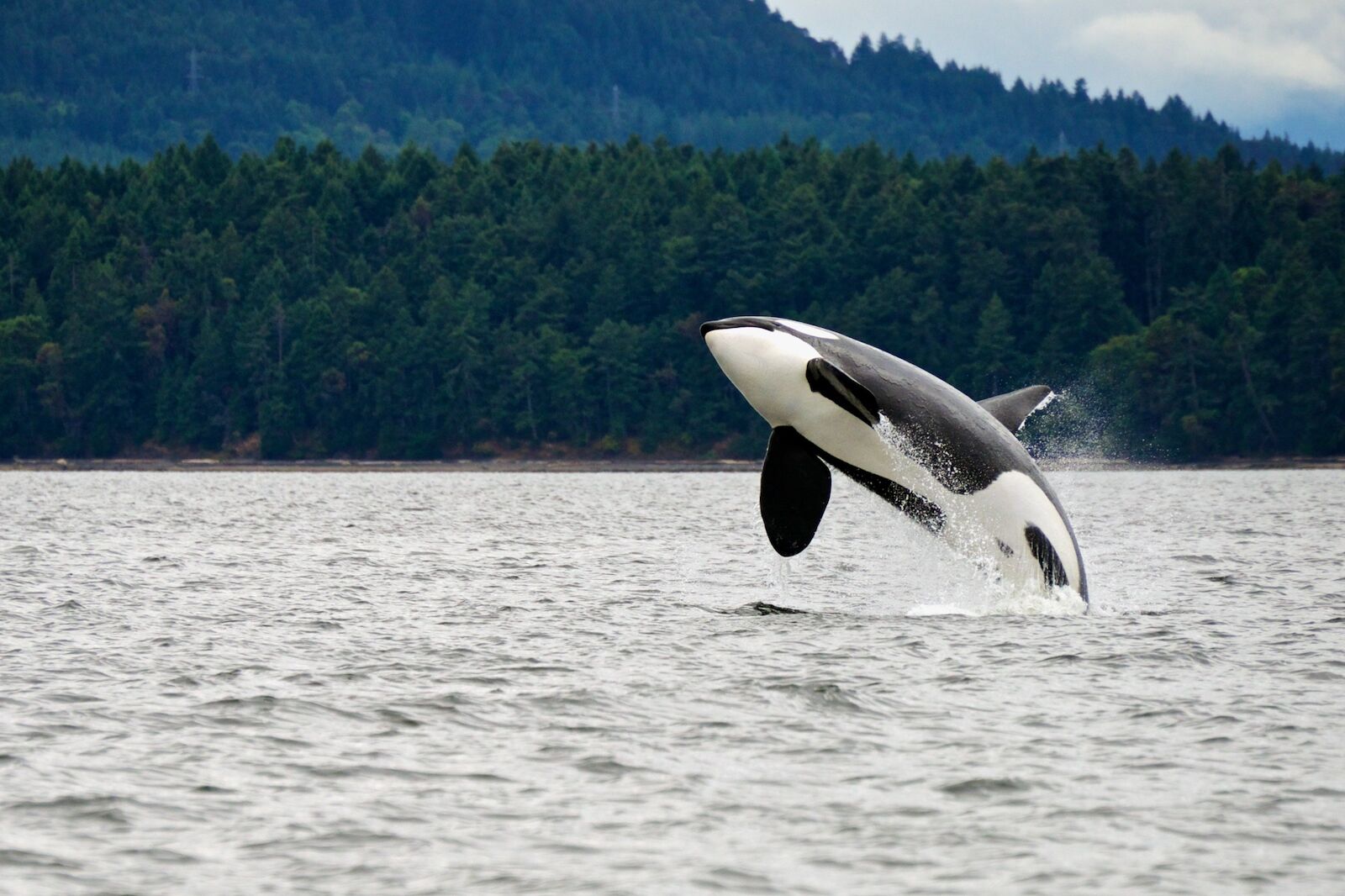 There’s no shortage of stunning aerial views in Seattle, from the Space Needle to the city skyline and the distant majesty of Mount Rainier. To see all of those from a new perspective, consider taking a quick, budget-friendly flight around Seattle with Seattle Seaplanes, covering 31 miles. Tours are $120 per person and last around 20 minutes.

Or if you’re more of a foodie, grab some friends and pick a floatplane picnic tour with Northwest Floatplane Picnics, leaving from Seattle. You’ll fly for around 15 or 20 minutes to one of two coastal sites where a private chef will prepare a multi-course gourmet picnic featuring local foods from the Pacific Northwest like fresh-cracked Dungeness crab with citrus-garlic sauce and smoked salmon dip with toasted baguettes. Menus are totally customizable, and the seaplanes can seat up to nine guests.

How about a seaplane day trip combining whale watching and the best of Seattle’s surroundings? Whale-watching seaplane tours with San Juan Safaris take off from Lake Washington (around 20 minutes from downtown Seattle) and head towards the seaside village of Friday Harbor on San Juan island, taking in the city, the Olympus mountains, and Puget Sound on the way. From San Juan island, you’ll switch to a whale-watching tour boat to spot orcas and humpback whales. At close to $500 per person, it’s not a cheap day out, but it’ll definitely be a memorable one. 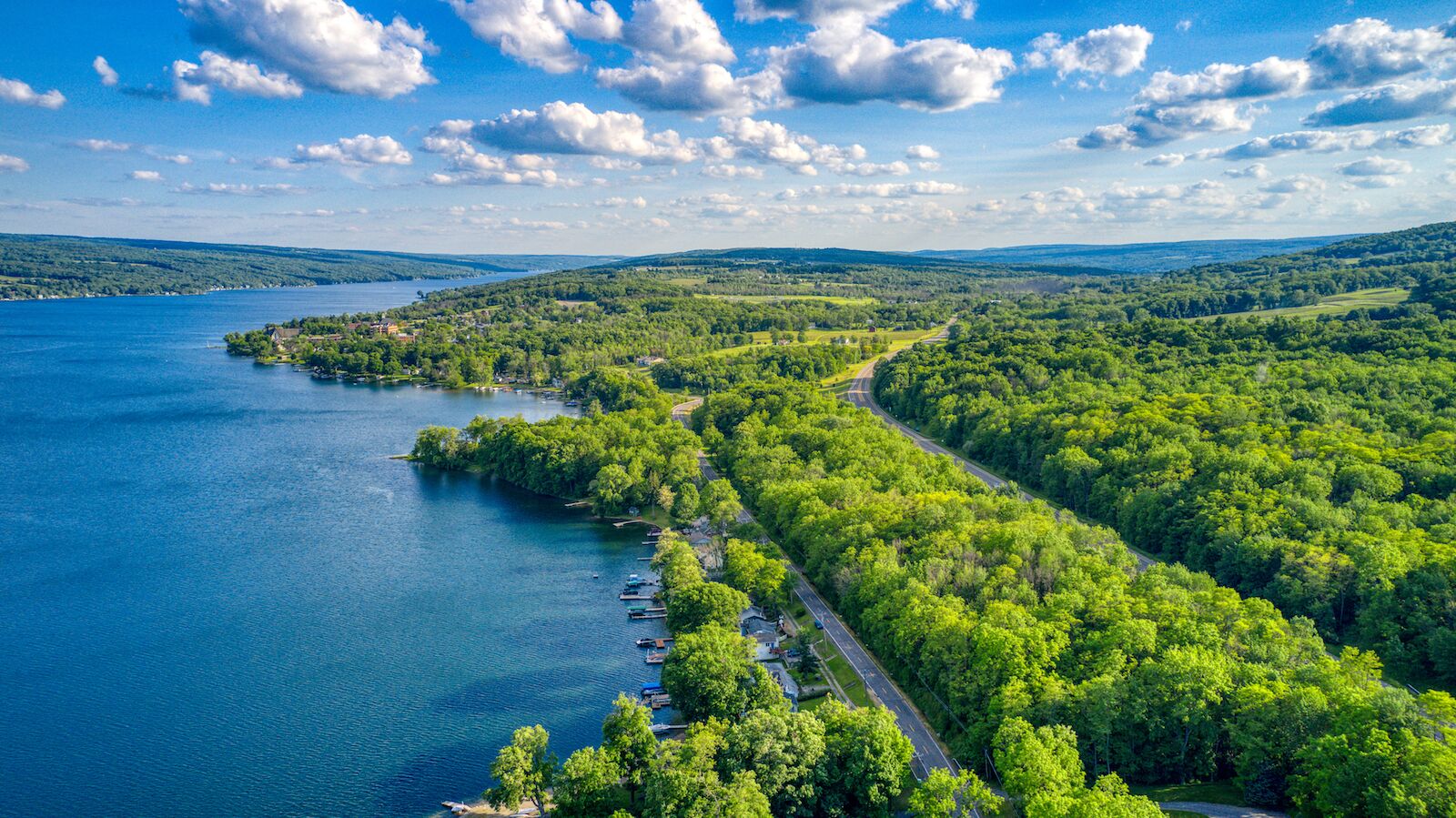 While New York City operates at warp speed, there are plenty of spots in the state far more low-key than the city that never sleeps. An easy place to head from the city is the Finger Lakes region, 250 miles northwest of the Big Apple. It’s a region known for waterfalls, fine wines, and the 11 lakes that give the region its moniker.

Lake Keuka is home to Finger Lakes Seaplanes, which offers 30- and 60-minute flights above the area, taking in lakes, long shorelines, expansive forests, dairy farms, and the historical town of Penn Yan. Fittingly, Lake Keuka is the birthplace of the floatplane, first flown in 1911 by local aviation legend Glenn Curtis. Glenn was also the first person to get a pilot license in America. Planes can hold a maximum of three guests, so it’s almost always a private tour. 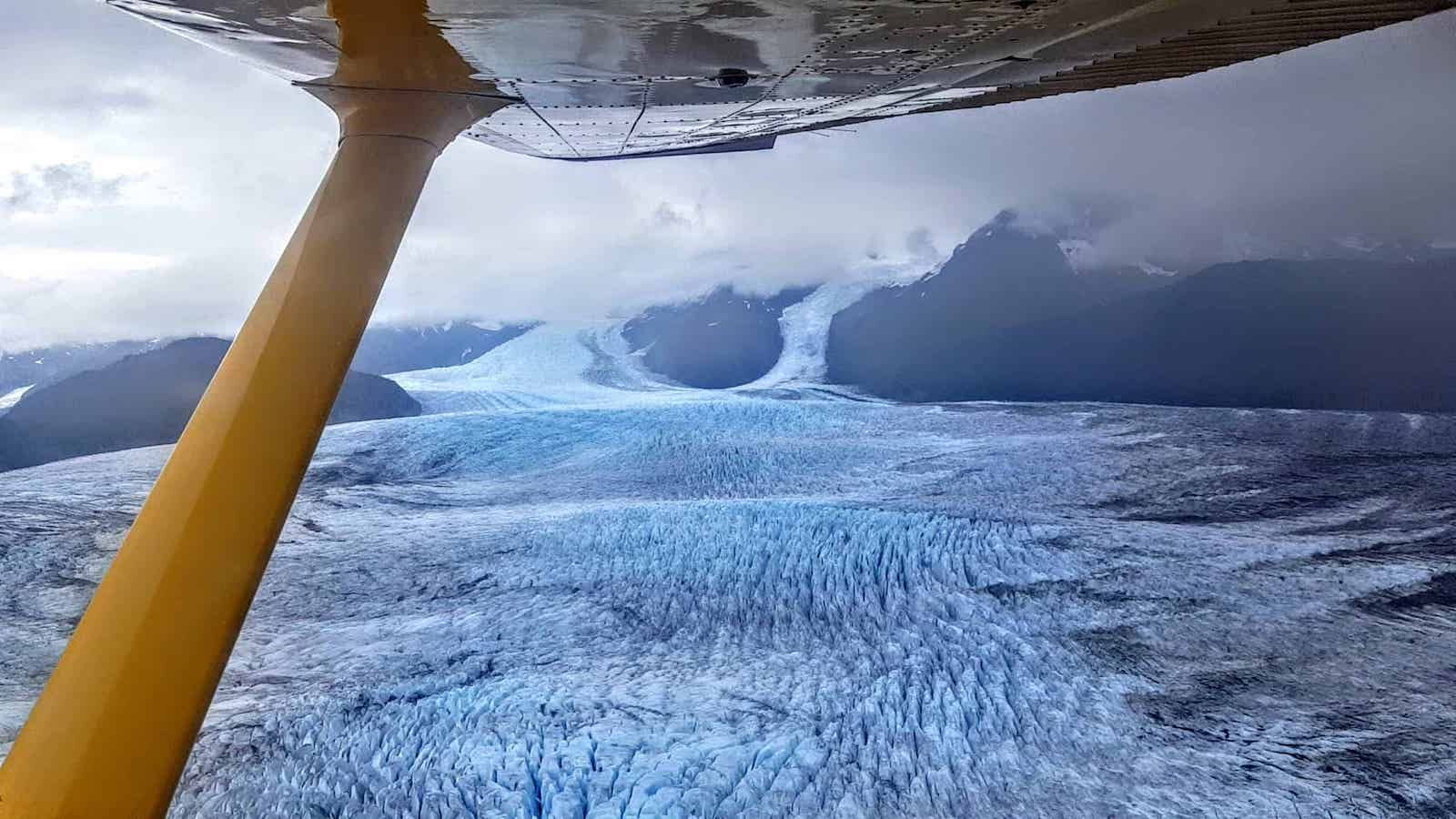 From misty fjords and glaciers to ice fields and bears, Alaska has enough wilderness to wow anyone. After all, the whole of Alaska is pretty much wild. And with such limited access via roads or even on foot, plane travel is sometimes the only way to get between small towns and hotels. Because of the state’s massive size — it’s 663,000 square acres — viewing it from the air is the best way to see it. In a place where weather and isolation make it nearly impossible to service and maintain runways, the abundance of lakes and waterways make seaplanes the obvious choice, not only for sightseeing, but for regular transport, too.

It’s hard to visit Alaska and not see any wildlife, but to see the state’s grizzly bears, you need to head to certain specific areas — and having a plane within running distance probably isn’t a bad idea either. The Pack Creek Bear Tour from Alaska Seaplanes heads to the delightfully named Fortress Of The Bears. Trips run from Alaska’s capital (Juneau) between May and September and include about 30 minutes of flight time each way plus around five hours on the ground with a guide looking for bears. But it’s one of the pricier single-day seaplane tours in the area at around $850 per person, depending on the season.

If you’re after a quicker and cheaper flight with potentially less risk of coming up close to a grizzly, a scenic flight over the rugged peaks of the Juneau Glacier and Icefield is a great option. After taking off from the float pond at Juneau Airport, you’ll have 55 minutes of raw Alaskan wilderness beneath you. It’s far more affordable at around $300 per person with a minimum of two people. 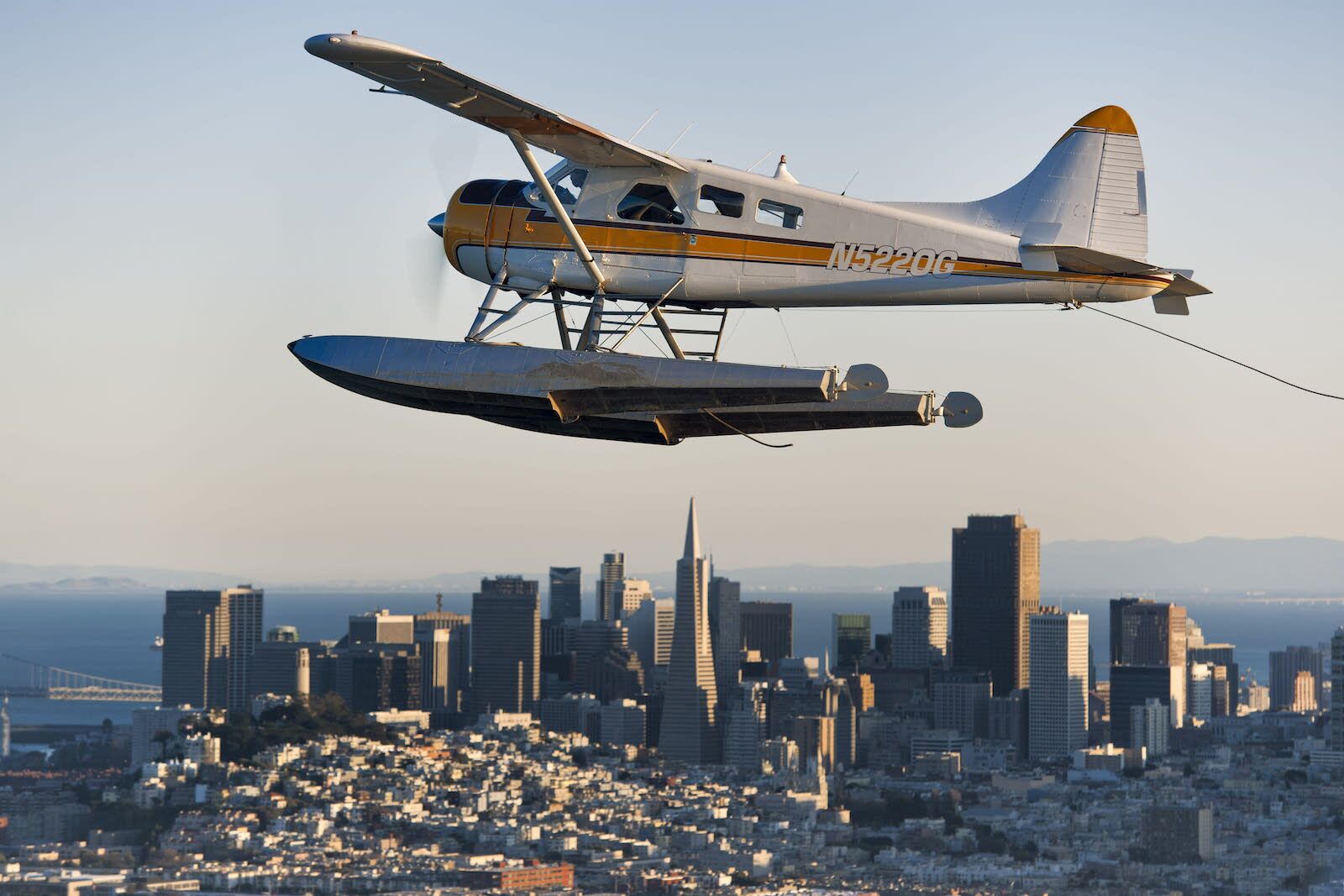 Since its establishment by Europeans in the 1700s, the central hub of San Francisco has been the harbor and waterfront area. So it makes sense to use the city’s centerpiece as the start and finish for a swift scenic adventure.

Pound for pound, it’s hard to find anywhere else in America that can pack in so many iconic landmarks in such a short flight. A 30-minute Golden Gate Tour from Seaplane Adventures cruises passengers over the San Francisco Bay and past the Golden Gate Bridge, Baker Beach, Alcatraz, Angel Island, downtown San Francisco, and even Oracle Park, home of the San Francisco Giants. However, you can make the trip even longer if you’d like by opting for the 60-minute flight.

But if you’re after a special flight just for two, opt for one of the most romantic seaplane tours in California: a sunset champagne flight over the city. Because of COVID-19 regulations as of December 2021, no champagne is allowed in the plane, so you’ll enjoy a drink beforehand (and ideally a few afterward at one of the city’s many excellent restaurants).

As beautiful as San Francisco is, it can be blessed with abundant fog, particularly from June to August. While it adds an air of mystery to the place, it’s not ideal for flying. But no problem – flights with Seaplane Adventures dodge it by heading into Marin County and Napa Valley. It’s a much better option than seeing a ‘flight canceled’ sign. 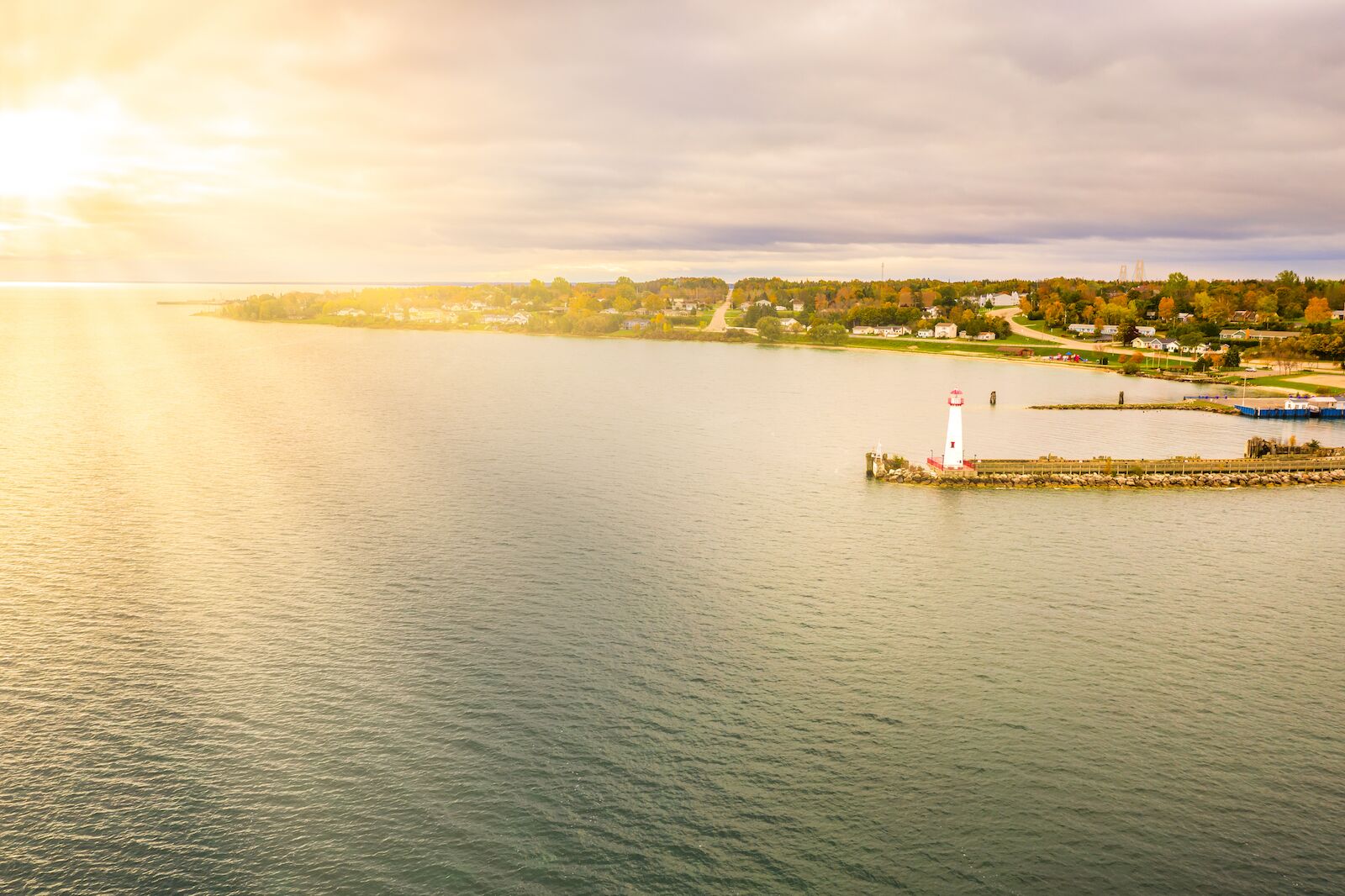 As the only state to touch four of the five Great Lakes, grandiose bodies of water are de rigueur in Michigan. You can see the sunrise from the waters of Lake Huron then turn to Lake Michigan to catch the sun setting below the watery horizon. And while all the lakes offer paddling, scuba diving on wrecks, fishing, and boating, it’s from the air that the sheer scale of the lakes really wows.

One of the best aerial views is from The Straits of Mackinac, where Lakes Michigan and Huron meet. So even opting for just a quick 20-minute flight with Mackinac Seaplane Tours will give you great views of 45 miles of Great Lakes shoreline, several islands, and Tahquamenon Falls. They also have other tours more focused on fall colors and area lighthouses. 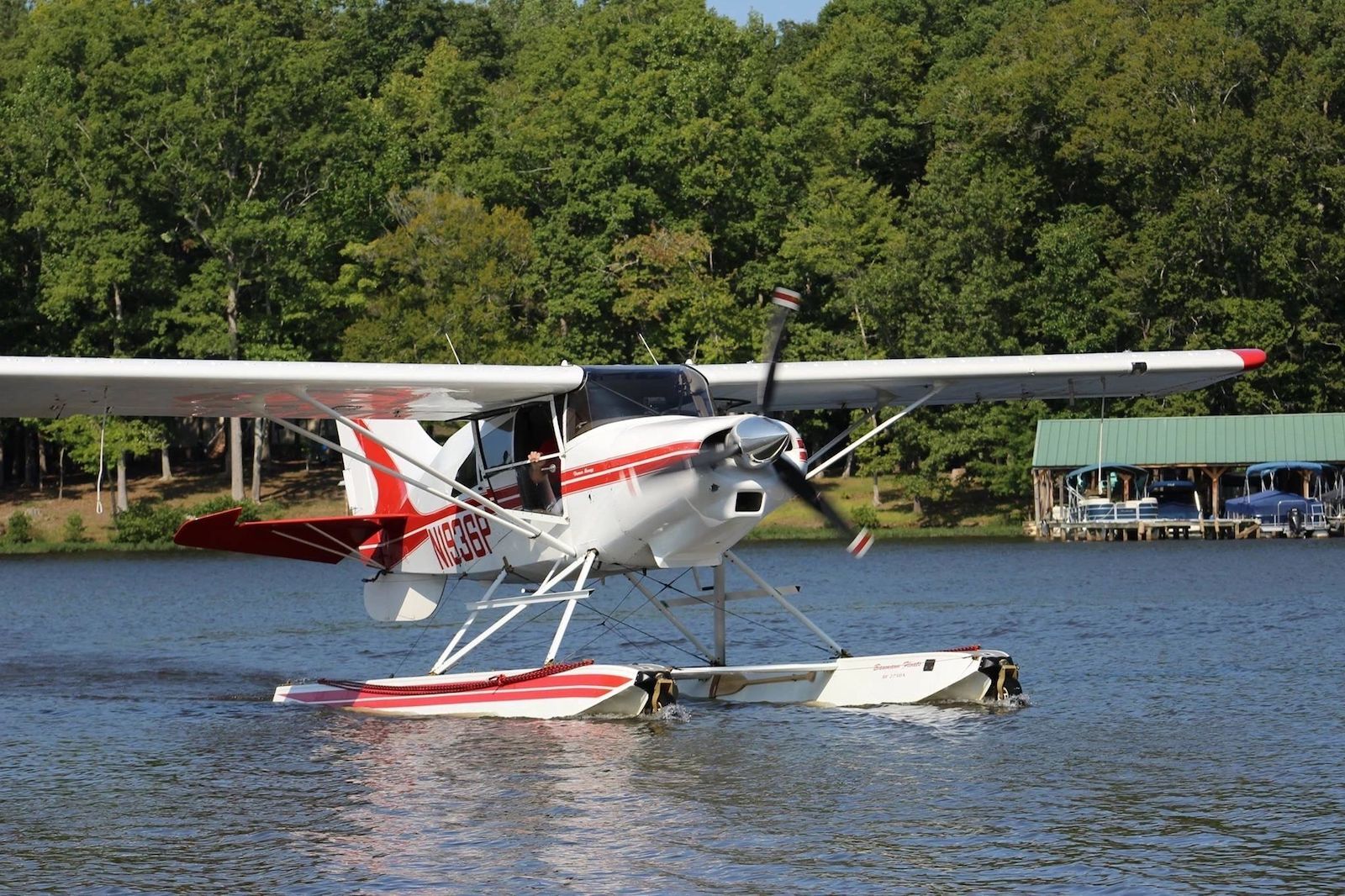 Boasting great fishing, 350 miles of shoreline, and the nearby Rosemont Winery, Lake Gaston is one of Virginia’s best spots to be close to nature. Sand Dollar Seaplanes runs 30-minute seaplane tours over Lake Gaston, Kerr Lake, and many more of Virginia’s scenic waterways throughout spring, summer, and fall. The planes hold just two adults, making it a romantic activity for couples spending a weekend near the Virginia/North Carolina border. 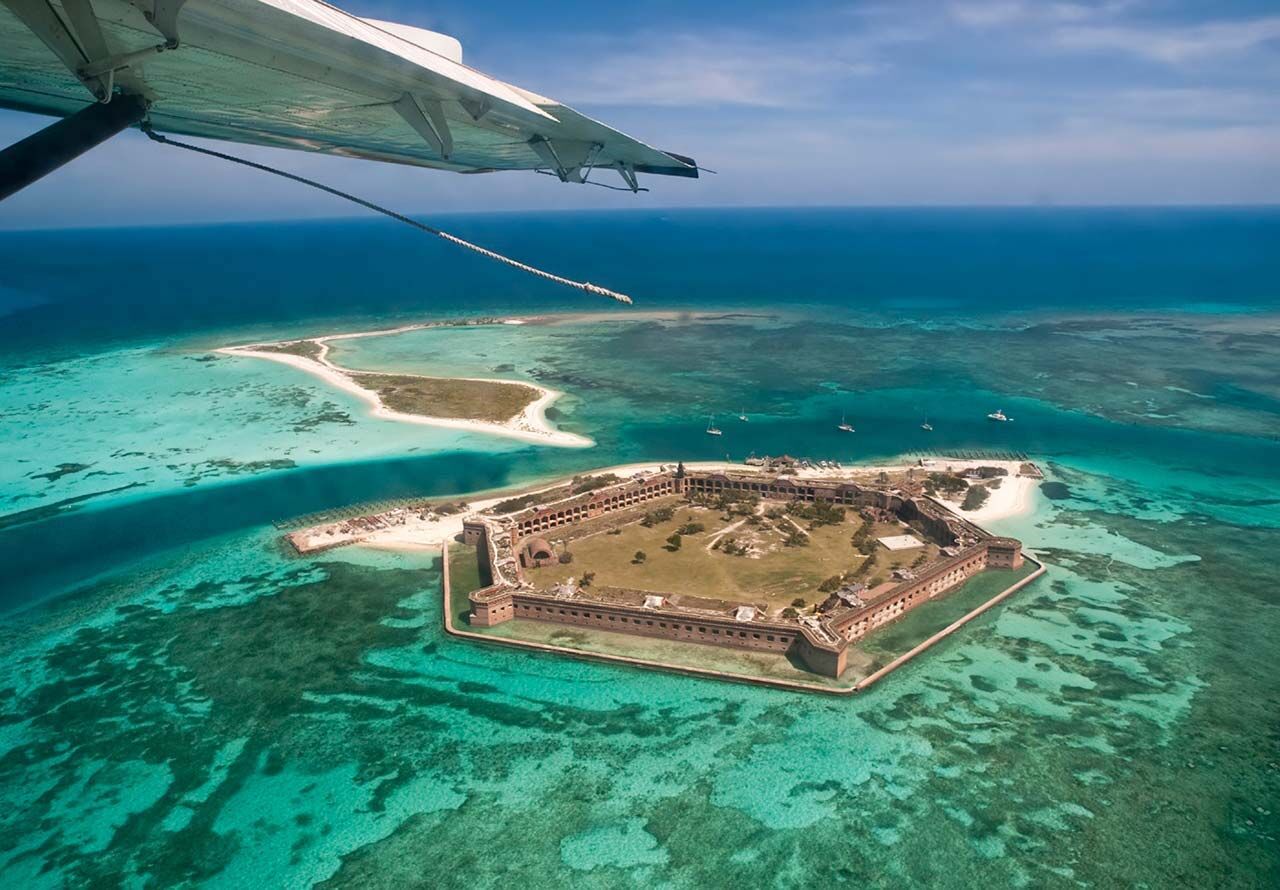 Want to spot alligators and watch people hurtling (and hopefully not hurling) on roller coasters from above? Where else but Florida?

Home to the cheapest seaplane trip in America at just $80 per person, the 15-minute Lake Dora ‘Splash & Dash’ tour with Jones Brothers and Co. takes guests around several lakes and island and the towns of Mount Dora and Tavares. But if you can swing it price-wise, consider the longer $189 seaplane tour. It lasts around 45 minutes and guests will spot massive gators while flying “low and slow” over Lake Apopka. The flight then heads to Orlando attractions like Universal Studios, SeaWorld, and Walt Disney World.

Or if covering as many beaches as possible appeals to you more, take the aptly named “The Beaches’ Tour with Air Adventures in Clearwater, which will see you buzzing sunbathers and swimmers from St. Pete Beach to Clearwater Beach. You’ll make a few water landings during the 45-minute flight, and whoever sits next to the pilot may even learn a thing or two about flying a seaplane.

For a longer trip with some more adventure, take the half-day excursion from Key West Seaplane Charters to Dry Tortugas National Park. For around $360 per person, you’ll fly 40-minutes each way to the underwater national park with the chance to spot turtles, dolphins, sharks, stingrays, and shipwrecks along the way. Once on the island, you’ll have 2.5 hours to tour Fort Jefferson or relax on the beach. Window seats are assured, and you can do a morning or afternoon trip. 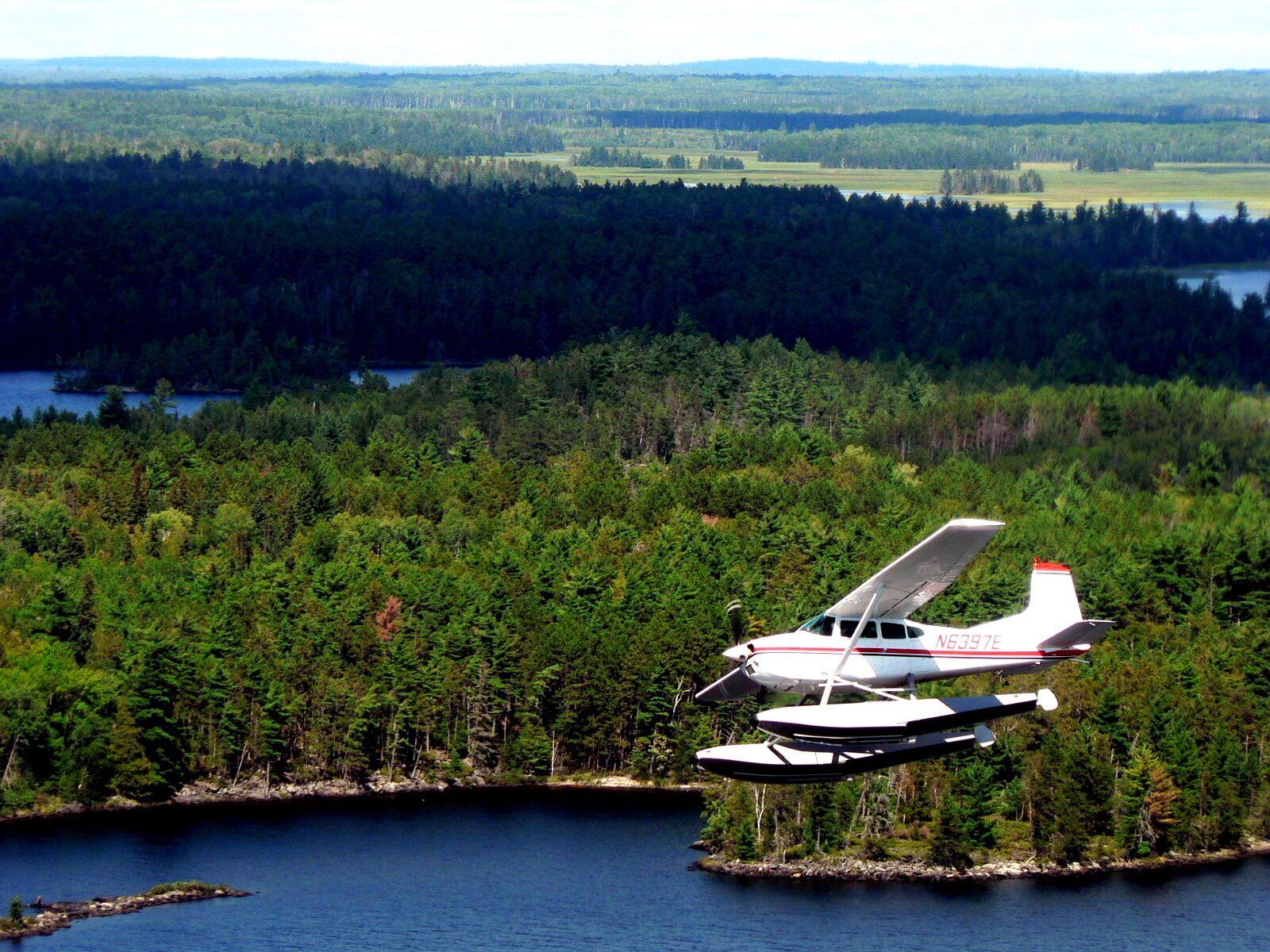 As far back as the 1940s, Lake Vermilion, in northern Minnesota, has been regarded as one of the most scenic lakes in America. Vermilion gets its name from the French translation of the local Ojibwe tribes’ word “onamuni,” which means “lake of the sunset glow.” With 40,000 acres of water and 365 islands, it’s worth witnessing from any angle, even if you’re just driving by. But from the air, it’s ethereal.

Adventure Seaplanes runs 30-minute seaplane tours around the lakes, the rivers, the area of Northwoods, Crane Lake, and the southern area of Voyageurs National Park — one of the least-crowded national parks in the country. That makes it a good place to spot moose, deer, and possibly black bears. It’s also a fantastic place for stargazing, though unfortunately, you can’t do that from a seaplane.

No matter where you fly, and whether you’re up for just a quick flight or stopping for an all-day wildlife-watching session, a seaplane tour will be a thrilling experience. Words like “majestic,” “scenic,” and “stunning” are often thrown around when it comes to views — and all are true — but words have a hard time conveying the sounds, smells, and adventure offered by the often-vintage and loving-looked-after planes. The feeling of building up speed and finally bouncing up into the air from the water is unlike any other flying experience you’ll find.

Airports + Flying9 places you can and should travel to by float plane
What did you think of this story?
Meh
Good
Awesome

American Airlines tells Olivia Culpo to ‘put a blouse on’ before boarding her flight to Cabo
Every type of Japanese sex club and what you’ll find inside
I traveled to South Africa during Omicron. This is what it was like.
Diplo took to TikTok to expose what Tulum is really like these days
4 unique desert experiences near the Las Vegas Strip
✖
travelstoke
Download the mobile app
stoked by