Reclaiming streets for pedestrians is in vogue right now. Thanks to the COVID-19 pandemic and restrictive social distancing measures, cities around the United States are looking to expand sidewalks, close roads to traffic, and give restaurants more space to seat patrons. Seattle has already closed 20 miles of streets to traffic to make more room for outdoor dining and activities, and cities in California, like Berkeley, are following suit.

Some cities around the world, however, sported world-class pedestrian streets long before they were cool. Sometimes tucked away in alleyways surrounded by urban sprawl, and sometimes serving as the main thoroughfare, walking streets offer a glimpse into a city’s past, and its unique character. From Los Angeles to Beijing, these beautiful, memorable promenades transport you back to a simpler time when you didn’t have to look both ways to cross the road. 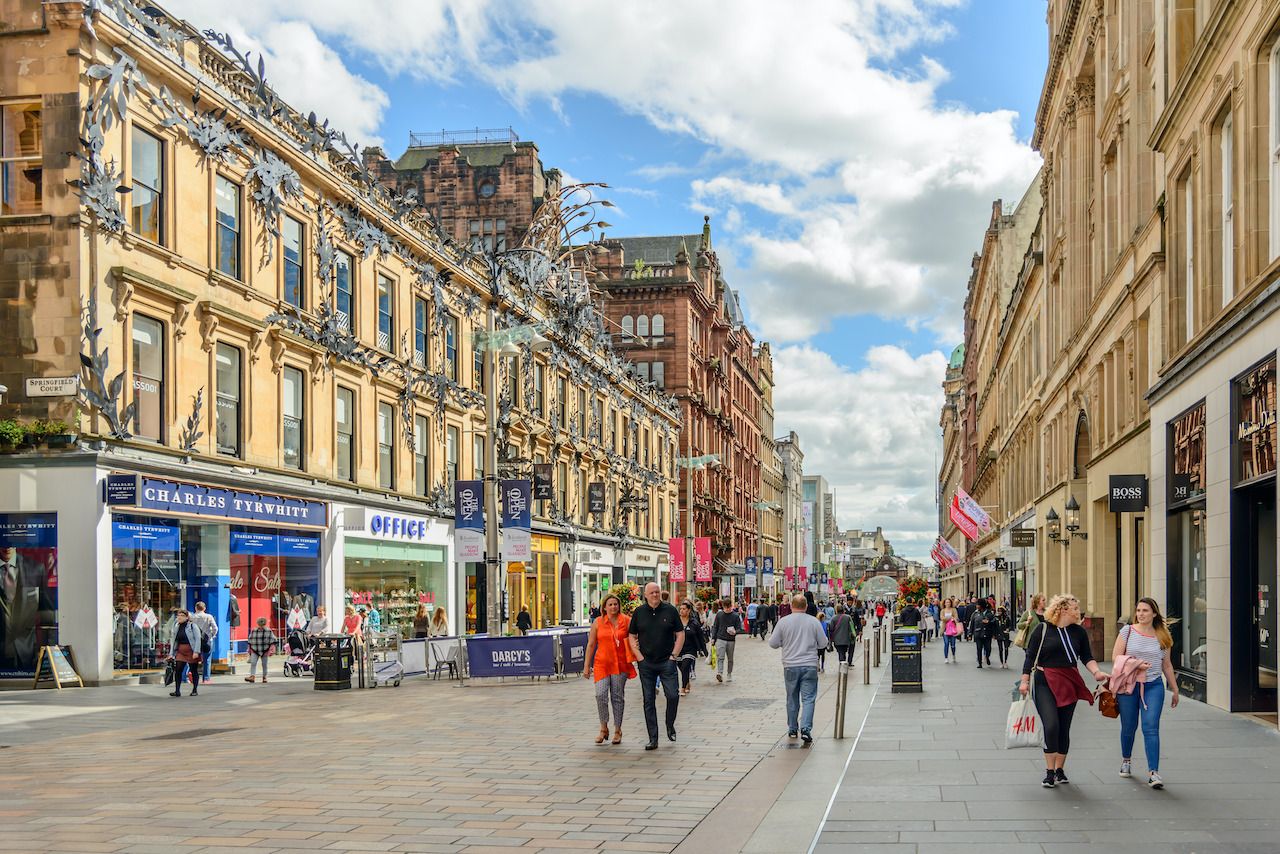 There’s a reason Buchanan Street was voted Scotland’s favorite street in 2003, and continues to receive recognition today. Glasgow’s most impressive promenade, it’s lined with Victorian and Edwardian commercial buildings, and is considered one of the best preserved streets in Scotland for 19th-century architecture. Vehicle-free since 1978, the street is home to a monthly farmers market and regular street theater performances, as well as boutique shops, museum, library, design center, and the Glasgow Royal Concert Hall. More than just a commercial and cultural center, Buchanan Street is the true heart of the city. Unlike some pedestrian walking streets, which have a more tourist-centric focus, local Glaswegians don’t shy away from it, often gathering there for social events, festivals, or casual shopping trips. 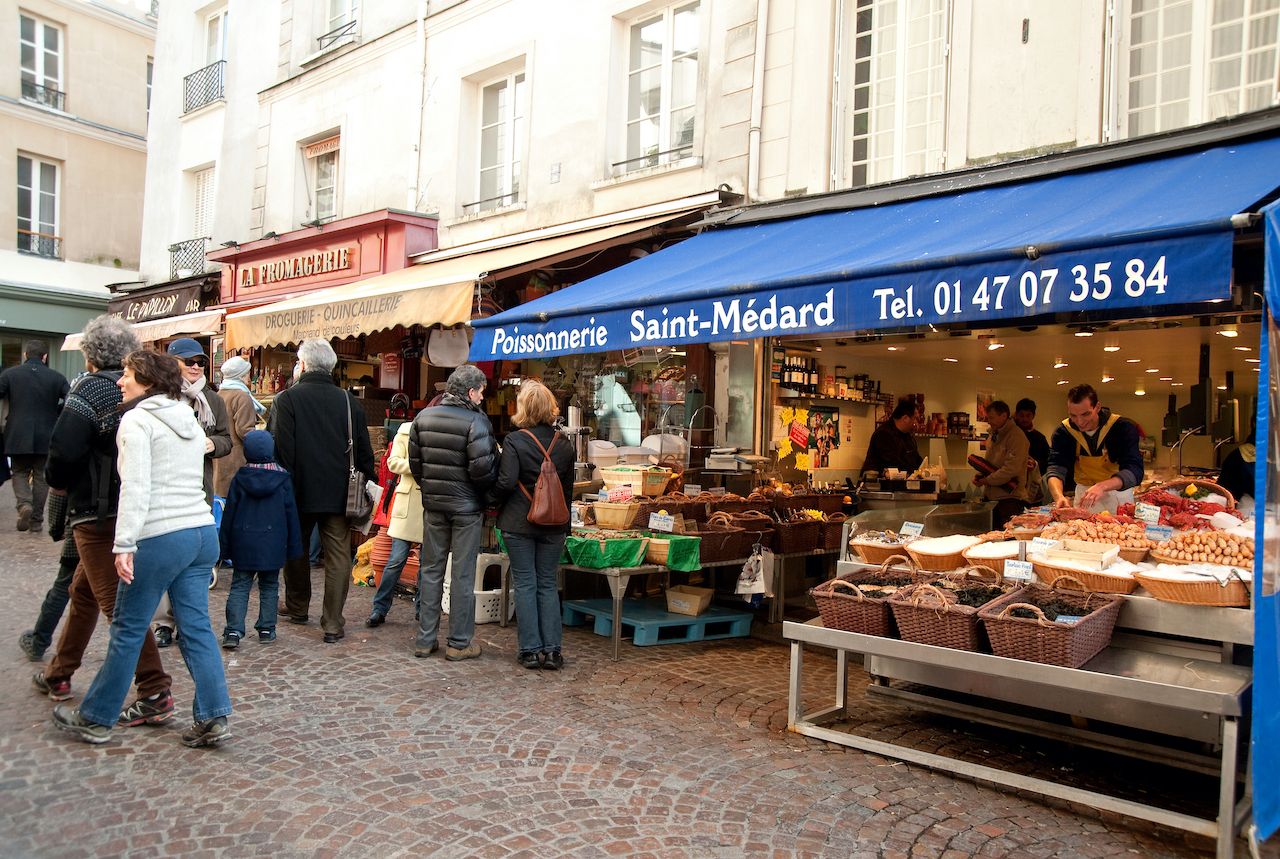 Rue Mouffetard, in the heart of Paris’ Latin Quarter, is a living piece of the city’s history. Dating back to the 12th century, the street is a remnant of an old Roman road, and even today has a distinctly medieval feel. The market on Rue Mouffetard is among the city’s most popular, filling with shoppers every morning. Restaurants along the cobbled road offer a mix of Parisian and ethnic cuisine, and you could easily spend the entire day getting lost amid the colorful bazaars and shops. The family of French writer Denis Diderot lived on Rue Mouffetard in the late 1700s, and the street has been mentioned in literary works such as Ernest Hemingway’s The Sun Also Rises. 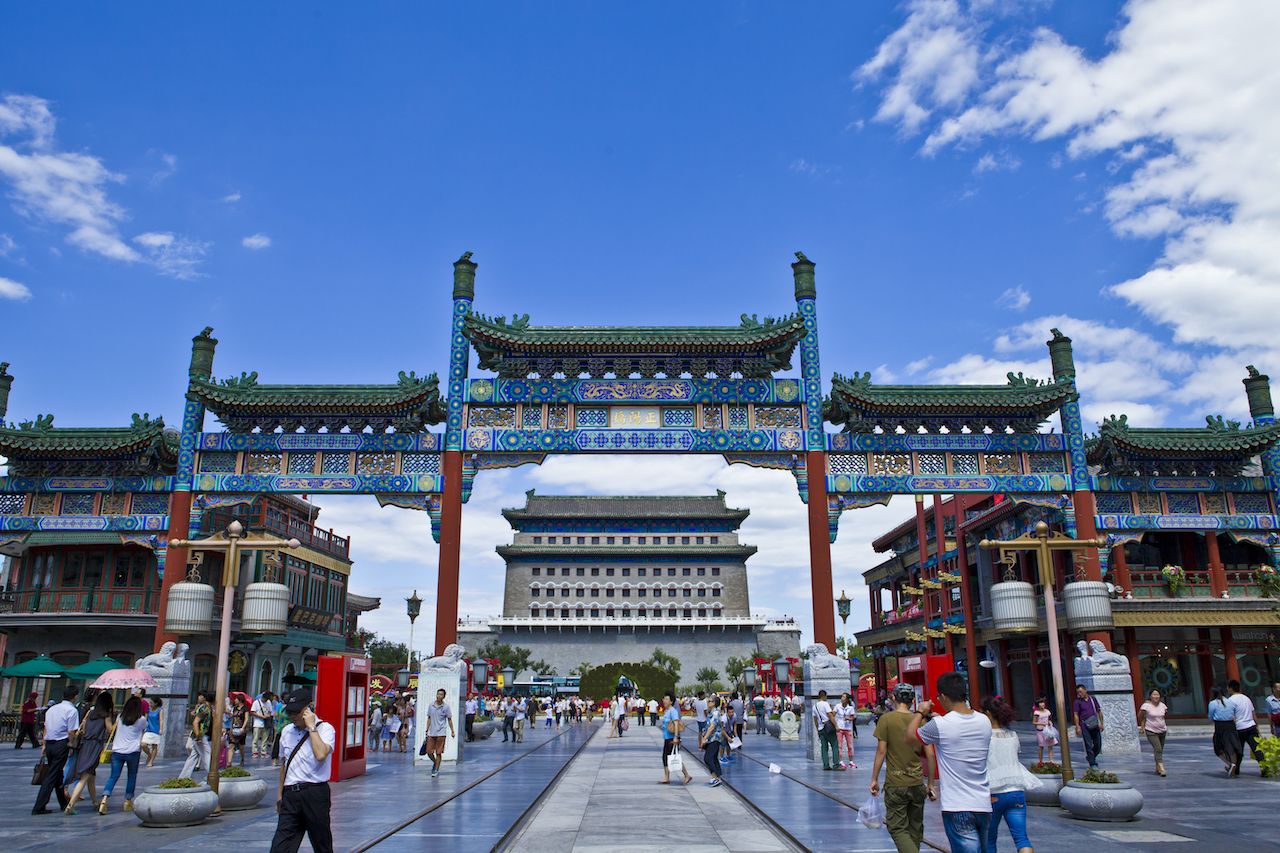 Running a half-mile from the Archery Tower of Qianmen in the north to Tiantan Park in the south, Qianmen Street is one of Beijing’s most famous thoroughfares. The street dates back over 570 years to the Ming and Qing dynasties. Originally called Zhengyangmen Street — the name was changed in 1965 — its architectural style recalls the days of the Qing dynasty in the 17th century. Now, the street is an eclectic blend of old and new. Once home to workshops, warehouses, and theaters, the street was renovated before the Beijing Olympics in 2008, and is now a popular nightlife destination. The Quanjude restaurant, a Beijing institution since 1864, is located on Qianmen Street, along with the famous Lao She Teahouse. 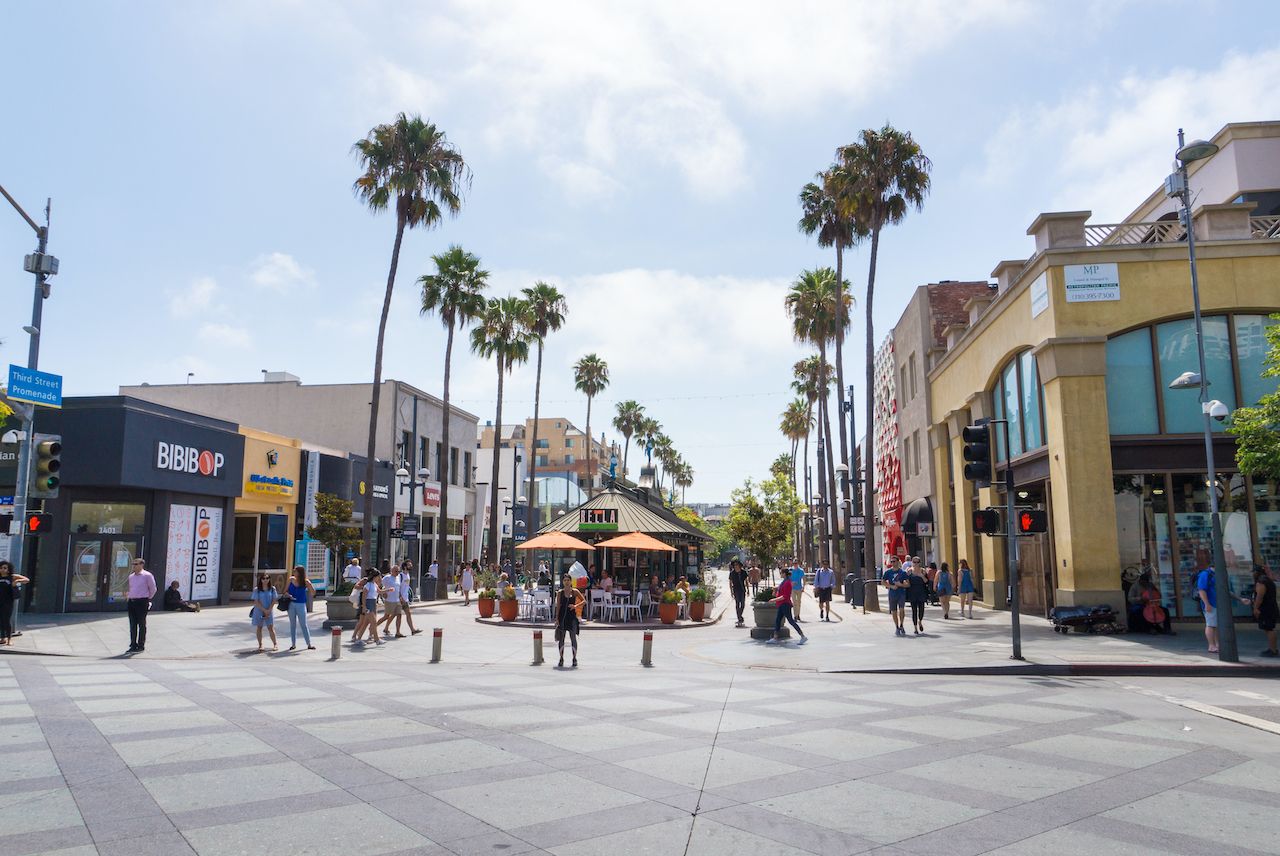 Not exactly as historically inspiring as Rue Mouffetard, the Third Street Promenade in Los Angeles is the quintessential representation of the city itself. Located just two blocks from the iconic Santa Monica Pier, the pedestrian boulevard stretches for three blocks, and is packed with restaurants, stores, and performers. And the street isn’t just any outdoor strip mall. Lined with trees on either side, fountains and pools in the midway, and with a view of palm trees all around, there’s no mistaking that Third Street Promenade is a classic California experience. While the street has been central to Santa Monica’s business district since the 1800s, it has only existed in its pedestrianized form since the 1960s. 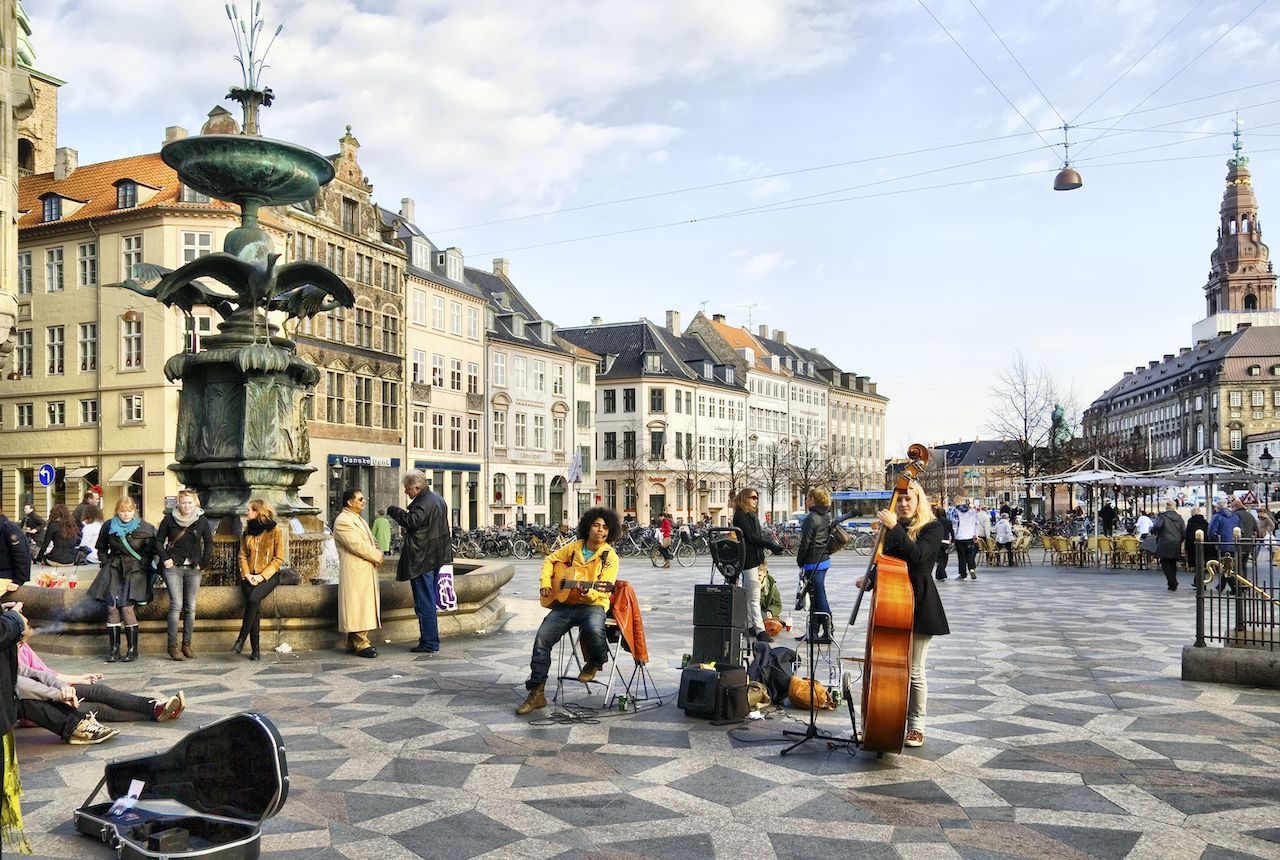 One of the longest pedestrian streets in the world, Strøget stretches 0.7 miles through the heart of Copenhagen. Vehicle-free since 1962, Strøget is known as a major shopping thoroughfare that’s immensely popular with both visitors and locals. The street runs through Copenhagen’s old town, making it one of the city’s most important, high-profile, and heavily trafficked streets. When Strøget was pedestrianized in 1962, it marked an important shift in Danish urban culture, from a focus on vehicular transportation to more pedestrian- and bike-friendly roads. Many cities around the world have used Copenhagen — and Strøget — as a blueprint for similar urban transitions. 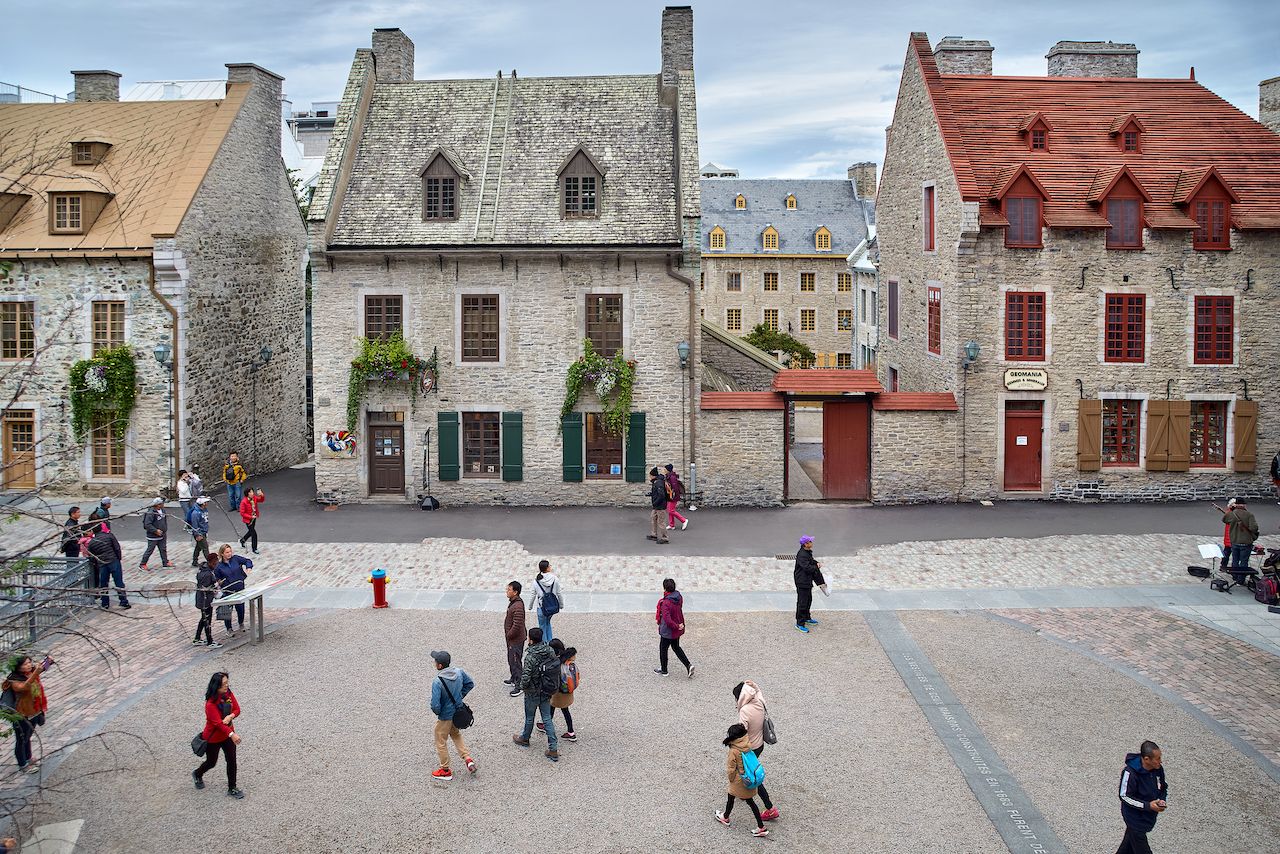 If you’re craving a European pedestrian street but find yourself on the wrong side of the Atlantic, Quebec City is the answer. This 17th-century city is North America’s version of the Old World, and the Rue du Petit-Champlain is a big part of that. Named after Samuel de Champlain, who founded Quebec City in 1608, this street in Quebec City’s old town was North America’s first commercial district. It might be due to the architecture, or it might be because everyone is speaking French, but walking down this street truly feels like you’ve stepped into 17th-century Paris.

To get there, descent the Breakneck Stairs, the city’s oldest stairway, built in 1635 and named for its almost nerve-wracking steepness. Apart from the local craft shops and galleries, you’ll want to check out the street’s famous mural. Painted on the side of a house at 102 Rue du Petit-Champlain, the mural colorfully depicts the neighborhood’s history, including the bombardments of 1759, landslides of 1889, and a fire in 1682. 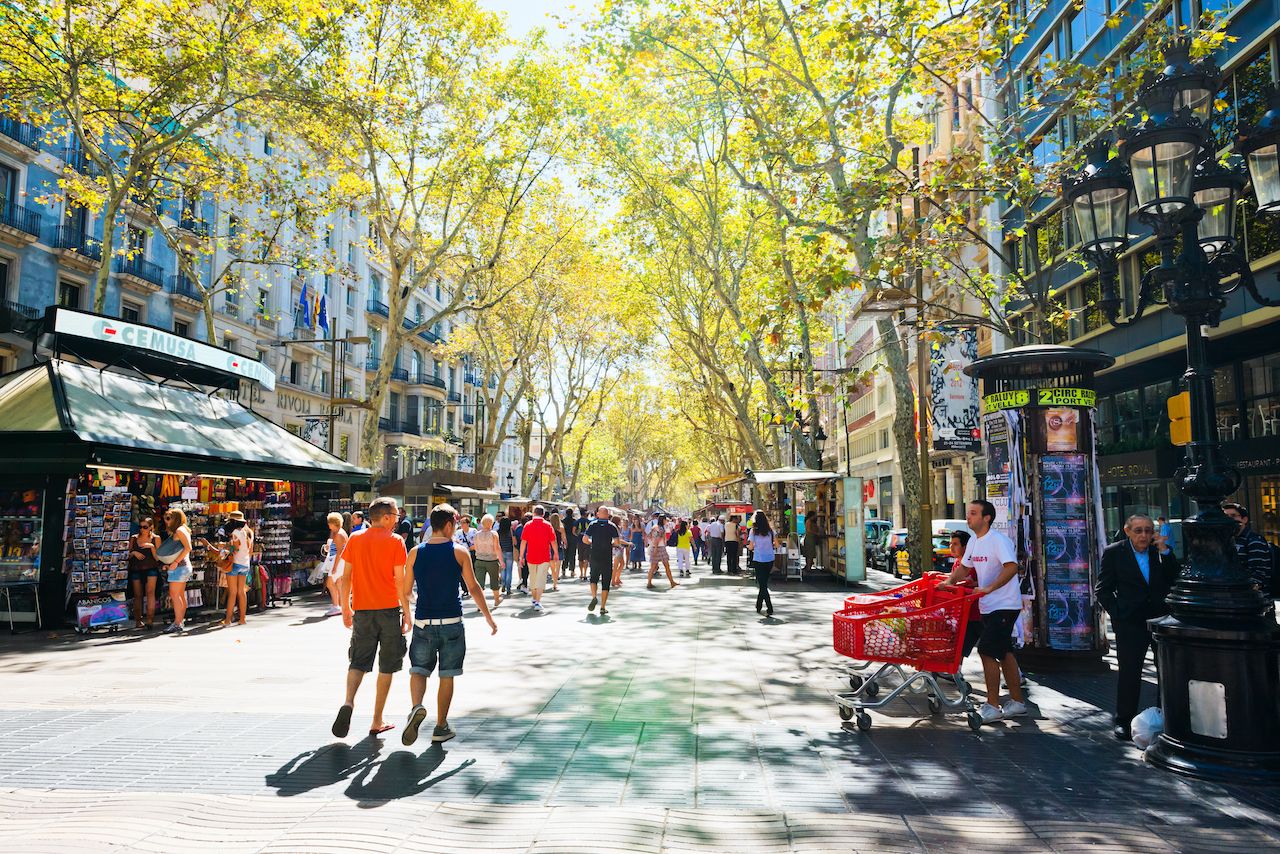 Perhaps Europe’s most famous pedestrian street, Barcelona’s La Rambla is not actually a pedestrian street at all. Stretching about one mile from Plaça Catalunya to the water, La Rambla is actually more like a really massive median in between two single-lane roads. But that median is teeming with activity, and it provides access to the many narrow, cobblestoned, car-free lanes of the Raval area on one side and the Gothic Quarter on the other, which in turns bumps up against another pedestrian-friendly neighborhood, El Born.

On La Rambla itself are street performers and a few cafes, but the best thing to do is to get off La Rambla to explore the cool things that run alongside it, like the massive indoor market hall, La Boqueria, which is best visited early in the morning. Late morning, grab a coffee and a pastry at Escribà, which is worth a visit for the colorful, Gaudí-esque decor alone. In the afternoon, walk less than a minute off La Rambla to Bar Lobo for tapas-style snacks and a cold beer.

Art + ArchitectureThe 9 Most Colorful Neighborhoods in the World
Tagged
Outdoor Travel
What did you think of this story?
Meh
Good
Awesome