Nikko lies in Japan’s Tochigi Prefecture, just two hours via express train from Tokyo. The city is shaped like a mushroom with most of the historical sites at the stem. The cap area, north and west of the city center, is mostly forested with the vastness of Nikko National Park to the north and Lake Chuzenji to the west. The quirkier attractions like Edo Wonderland and Tobu World Square are located east of the city center. Before you leave for Nikko, you’ll need to decide whether you want to explore the historical center, the outdoor museums to the east, or the natural beauty of the serene west. Here’s a breakdown of each area and its highlights. 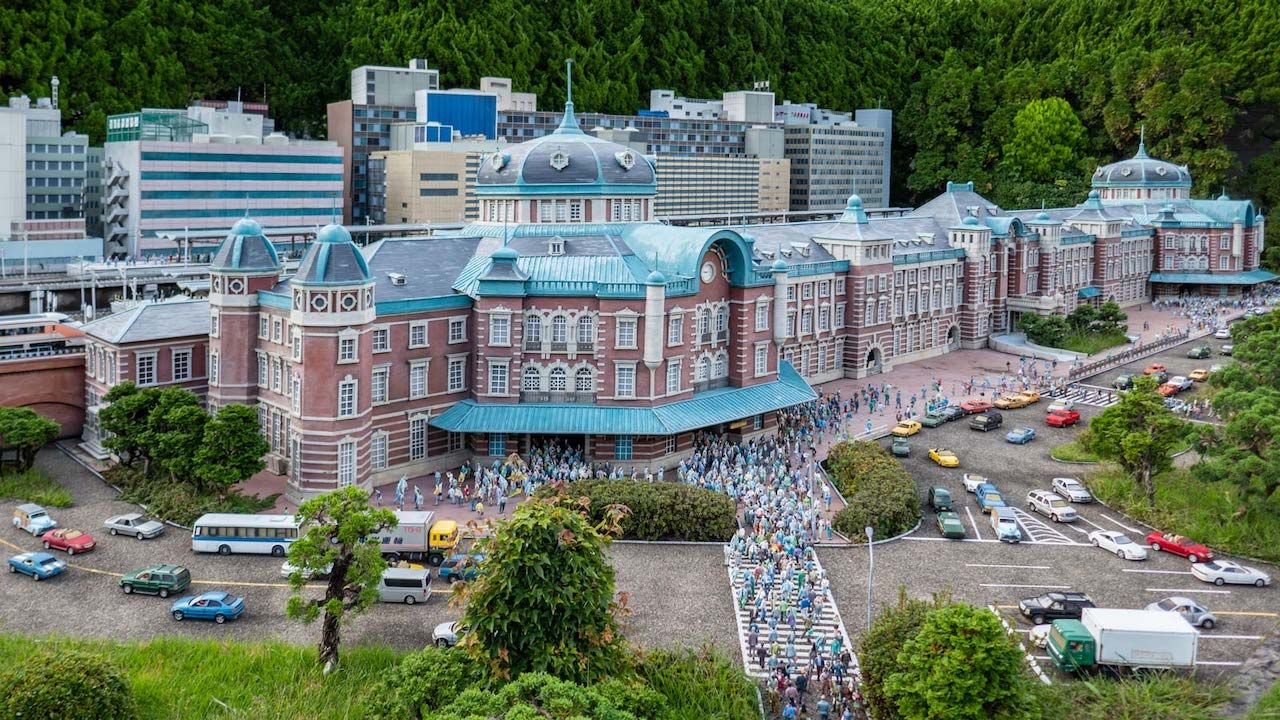 Once you’re at Nikko or Tobu-Nikko Station, you’ll be just under a mile from the iconic Shinkyo Bridge via Route 119. The stretch between the station and the bridge is lined with souvenir shops, art galleries, cafes, restaurants, and a variety of Japanese confectionery shops. Walking is ideal, but if you prefer to save your energy, take the northbound bus to the Total Kaikanzen stop, which is north of the bridge.

Once you cross the red bridge, you’ll be just a short walk from the Kosugi Hoan Museum of Art, which is named after the Nikko-born painter, Kosugi Hoan. North of the museum is the famous Toshogu complex, which includes the Toshogu Shrine and museums. Toshogu is considered to be one of Nikko’s top attractions as it draws both Japanese and international tourists. Highlights include the famous three wise monkeys (hear no evil, speak no evil, and see no evil), which are carved into the shrine’s horse stable. The first shogun — the leader of the Japanese military in pre-modern times — of the Tokugawa Bakufu (1600-1868) died in 1612 and is enshrined on the grounds as well. Allow at least two hours to visit the entire complex.

The area to the immediate west of the Shinkyo Bridge will allow you to experience some of Nikko’s natural wonders without venturing too far from the center. Route 122 begins north of the Shinkyo Bridge and runs west along the Daiya River, with several restaurants and parks along the route as well as the Kanmangafuchi Abyss, which was formed by nearby Mount Nantai’s last eruption nearly 7,000 years ago. 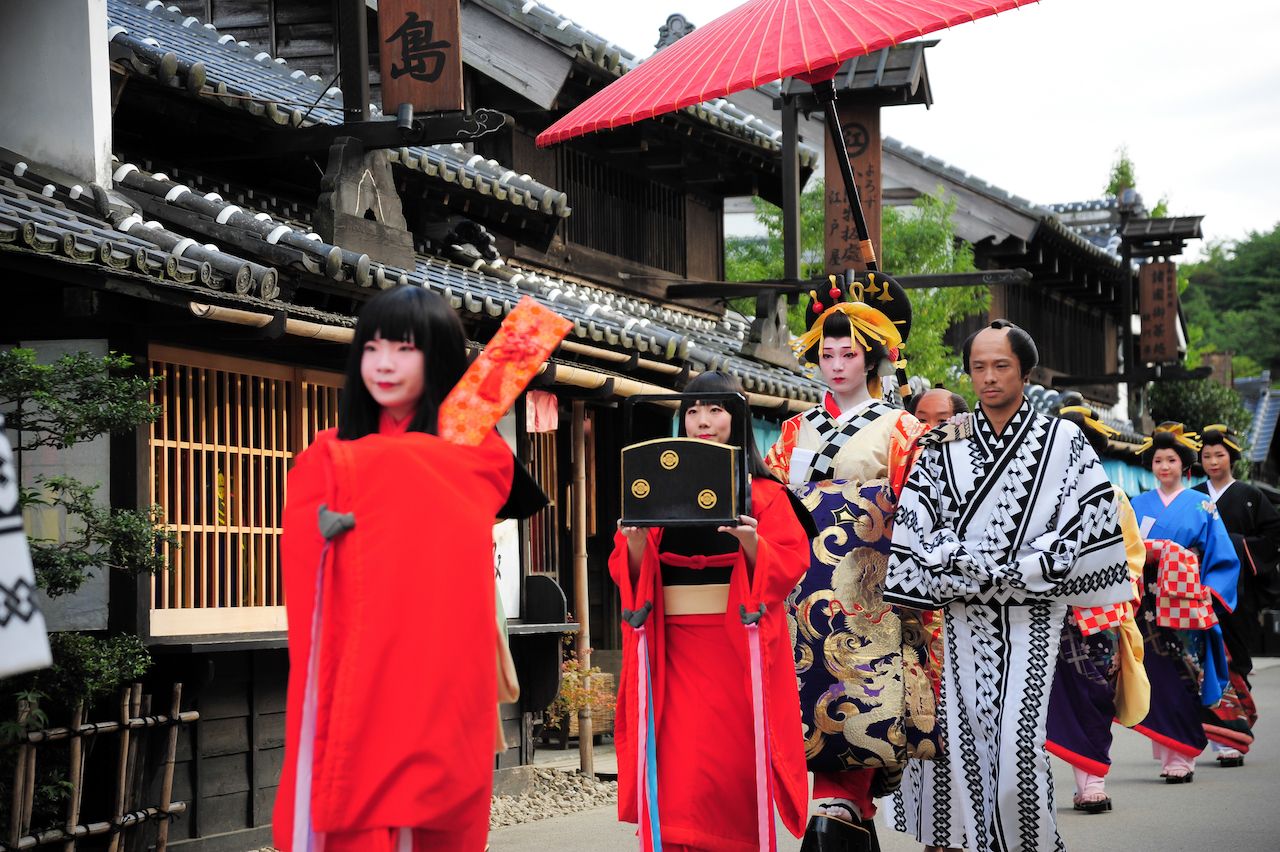 Outside of most train stations in Nikko, there are bus stops for Edo Wonderland, Tobu World Square, and the city’s other main attractions. If you plan to skip the center altogether, then you’re better off purchasing a ticket to either Kosagoe or Tobu World Square stations. If you plan to fully explore both, you’ll need an entire morning for one and most of the afternoon for the other. Also, attractions are more spread out once you’re outside of the center, so allow time to move between them.

Edo Wonderland recreates life in pre-1868 Tokyo, also known as the Edo period. To get the full experience, you should rent a period costume. You can get a “townsman” outfit for less than 3,000 Japanese yen, about $28, with prices increasing as you go up in status — the lord costume is close to 10,000 yen. It can take up to 10 minutes to don the grand lord costume, but you’ll have the help of the museum staff. They’ll make sure your (real) sword is in its right place as well. While you’re there, be sure to check out one of the amusing water shows or the riveting ninja show, after which you can get your picture taken with the combatants. The theme park has dozens of different wooden, kawara roof buildings. Each has a different theme, and it will take at least a couple of hours to fully experience the outdoor theme park.

Tobu World Square is an outdoor museum with 1:25 scale replicas of more than 100 famous buildings and landmarks from around the world. The detail in the models is awe-inspiring. Some even make sounds and have moving parts. Be sure to check out Buckingham Palace.

Other attractions east of the city center 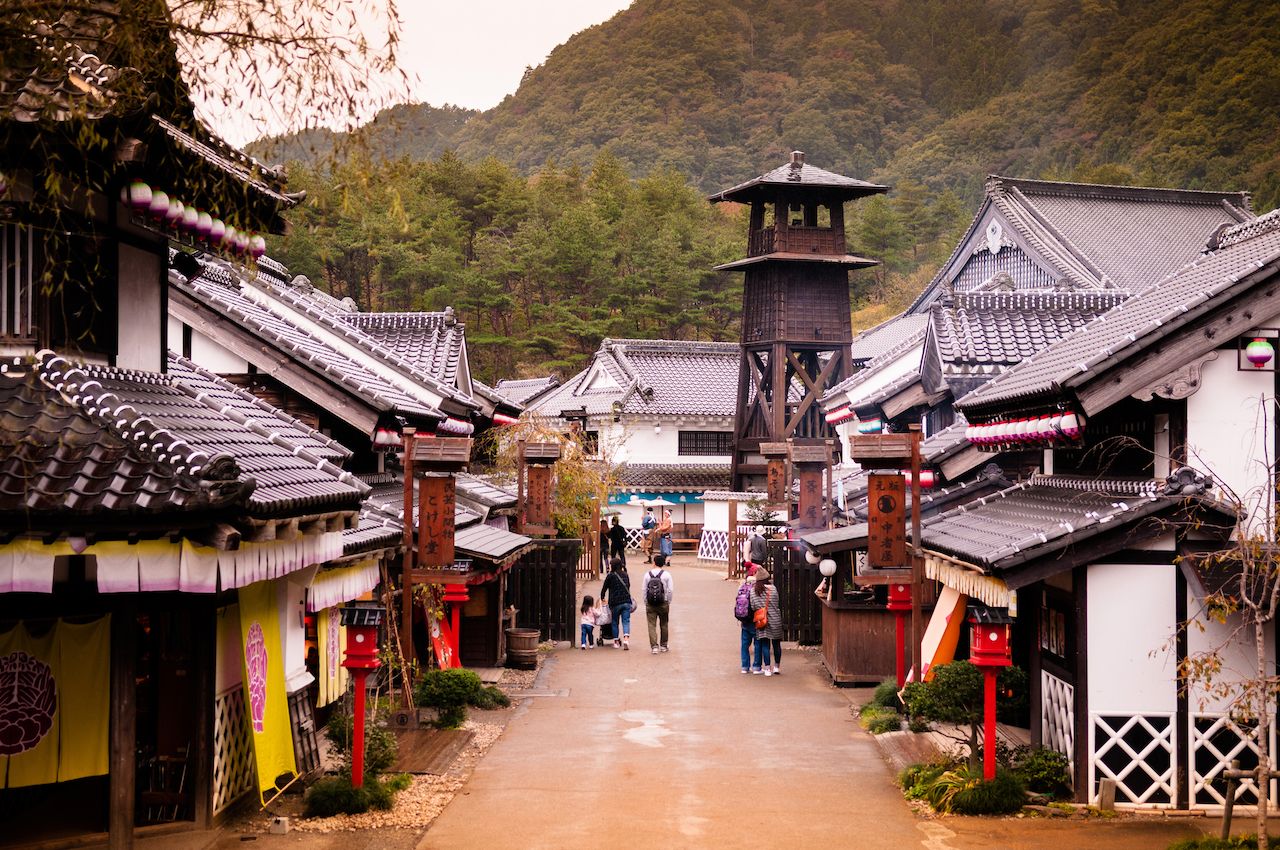 Other quirky attractions in the area include the Trick Art Pia Nikko and the Grand Maza Palladium. If you’re looking to experience the famous Japanese onsen baths, check out Akebi Onsen, which is a 10-minute walk from Edo Wonderland. This is quite convenient as most attractions are not within walking distance of one another once you’re outside of the city center. Both Edo Wonderland and Tobu World Square have on-site restaurants, which is great if you’re limited on time. 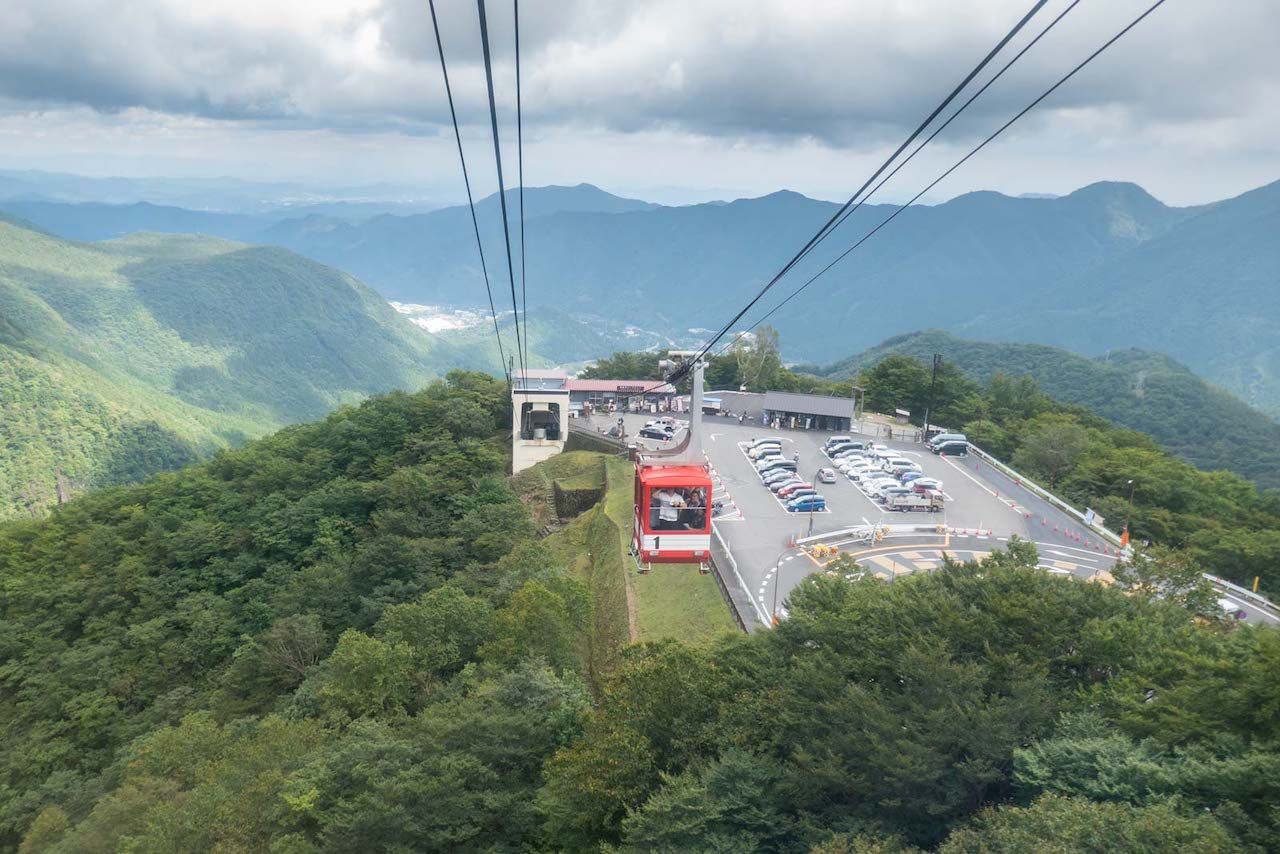 While there are some serene green areas near the city center, to really experience Nikko’s natural beauty, you need to head west. At least as far as Lake Chuzenji’s eastern shore. If you’re limited on time, you’re better off starting at the Chuzenji Onsen bus stop. From there, you can take a scenic cruise across the lake or enjoy a leisurely stroll along the lake’s southeastern shore, where the former British and Italian embassy villas are open to the public. Embassy staff knew that Nikko was an ideal place to escape the intense humidity of summers in Tokyo. The nearby Belgian and French villas are still in use by their respective ambassadors and staff. The British Embassy Villa has some historical exhibits and serves afternoon tea.

You can also check out the famous Kegon Falls, which has two observation decks. If you’re not afraid of heights, go for a ride on the Akechidaira Ropeway at 282 feet above the surrounding mountain range. The tram ride to the observation deck takes less than three minutes and is well worth it for the view of Kegon Falls and Lake Chuzenji. From that height, the falls and the lake beyond look relatively tiny. Before heading back to the train station, visit one of the many restaurants and small noodle shops along the shoreline.

Eating in the strawberry capital of Japan 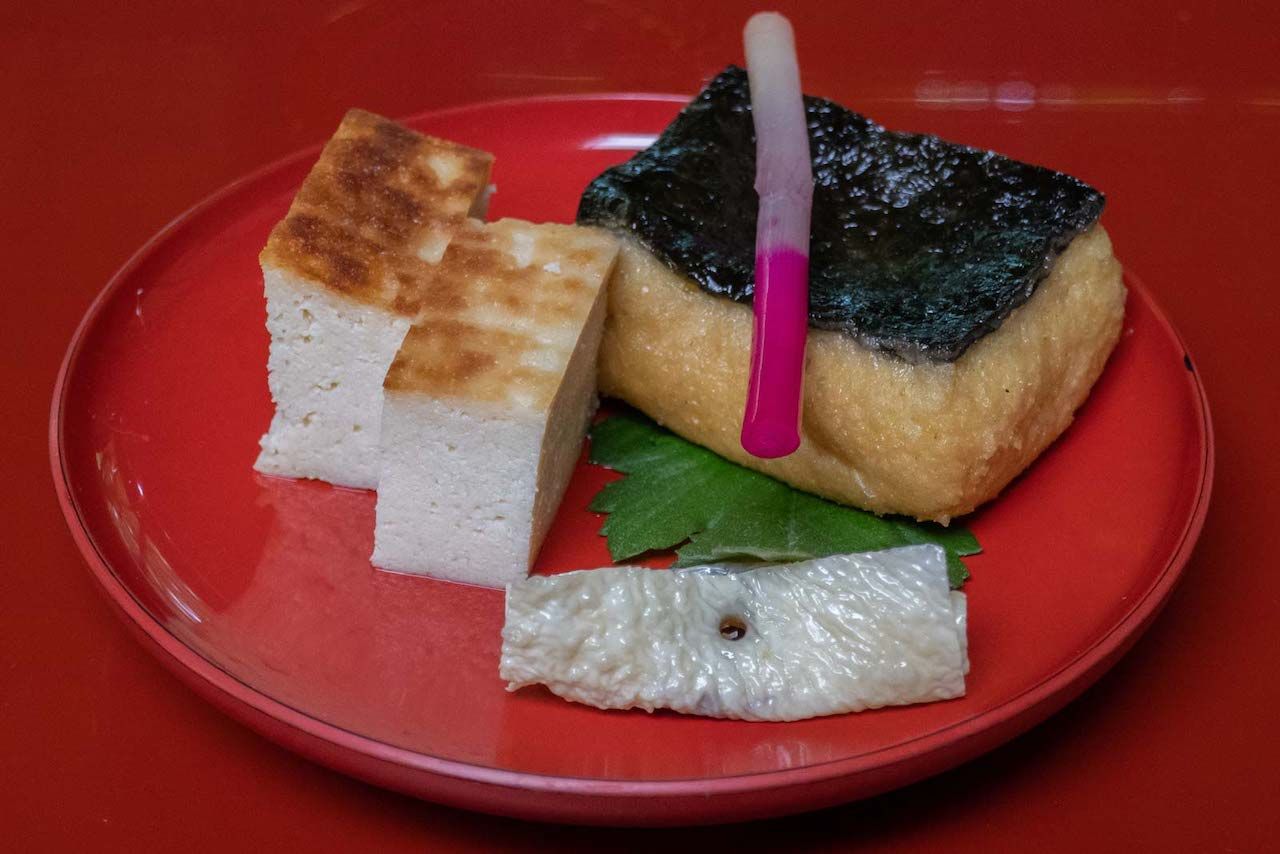 Whether you choose to explore the center, east, or west of Nikko, you’ll have a chance to explore the area’s unique food culture. For example, Tochigi Prefecture is the strawberry capital of Japan. Whether you’re in a grocery store, cafe, or street stall, you’ll likely see a variety of strawberry-infused confections. Strawberry popcorn, dried strawberries infused with Japanese chocolate, strawberry mochi, waffles, or other toppings are just some of the creative uses of Tochigi’s local fruit that you can sample. It’s not unusual to see people from Tokyo shopping in some of the local grocery stores.

Nikko is also one of the more vegan-friendly cities in Japan. Many restaurants offer shojin ryori, which translates to Buddhist cuisine. If you’re near Toshogu Shrine, check out Gyoushintei, which offers a special vegetarian menu. There are options in the east and west as well. While even non-vegetarians tend to be familiar with tofu as a source of protein, the Japanese are also fond of yuba, which is dried tofu skin. It’s chewy, has a nutty taste, and actually soaks up flavors much better than regular tofu. 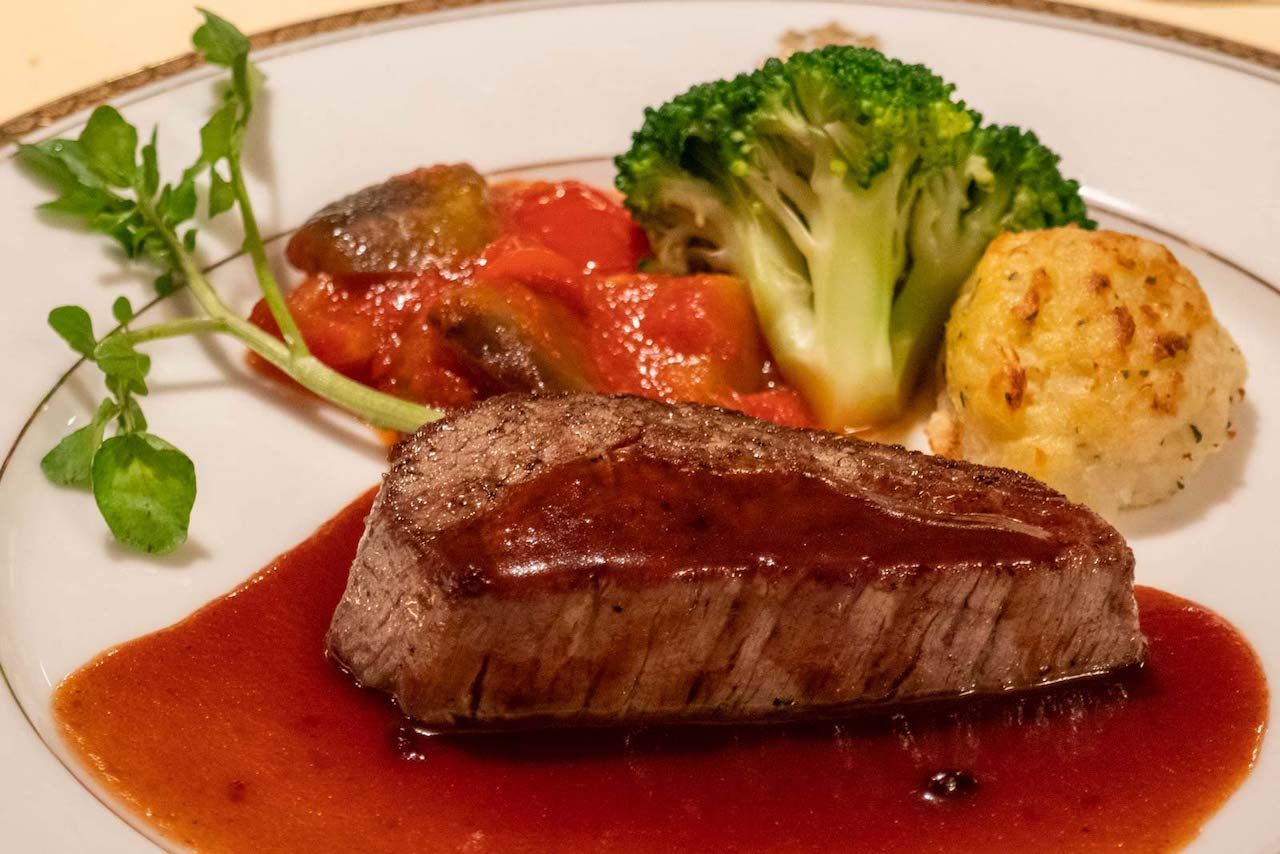 Quality beef is a source of pride for many Japanese. Talk food with the locals, and they’re likely to inform you that their local Tochigi Wagyu beef has the same top A5 rating as the world-famous Kobe beef. While it’s not as universally known, it’s certainly worth trying, if for no other reason than to see how it compares to the super-hyped stuff from Kobe. You’ll likely enjoy the same richness and tender texture that makes thinly sliced Kobe beef skewers sell for 1,200 yen on the streets of Tokyo.

Non-Japanese passport holders can purchase a Nikko pass at Tokyo’s Asakusa Station Tourist Information Center. For less than the cost of a regular round-trip train ticket, it includes a round-trip rail journey from Tokyo to Nikko as well as unlimited bus travel in Nikko. Pass holders also get discounts at many attractions. There are two versions, with the All Area Pass covering everything in this post. The World Heritage Area Pass is more restrictive and only covers the town center and some attractions to the east. In winter, alternative tickets are also available. Compared to Tokyo, Nikko is extremely car-friendly. Most areas have ample parking, so renting a car and driving yourself is also doable — if your budget allows.

CultureFrom Sacred Deer To Mochi, Nara Deserves a Spot on Your Cultural Tour of Japan
Tagged
Culture Travel Insider Guides
What did you think of this story?
Meh
Good
Awesome