One can never go wrong with a trip to Paris or Bali, but seasoned travelers are often looking for bigger challenges than the well-known tourism destinations, and there’s no shortage of culturally and politically complex places that are also tricky to visit. Whether it’s the site of generational conflicts like the Gaza Strip or a more dormant territorial dispute like the Falkland Islands, areas of conflict often have a lot to offer, with more historical and cultural layers to peel back than your typical destination. Convincing your significant other to change your Cancún vacation to a trek in the Tibetan mountains might prove complicated, but it’s totally worth it. These disputed territories should be on your travel list, even if they’re tough to access. 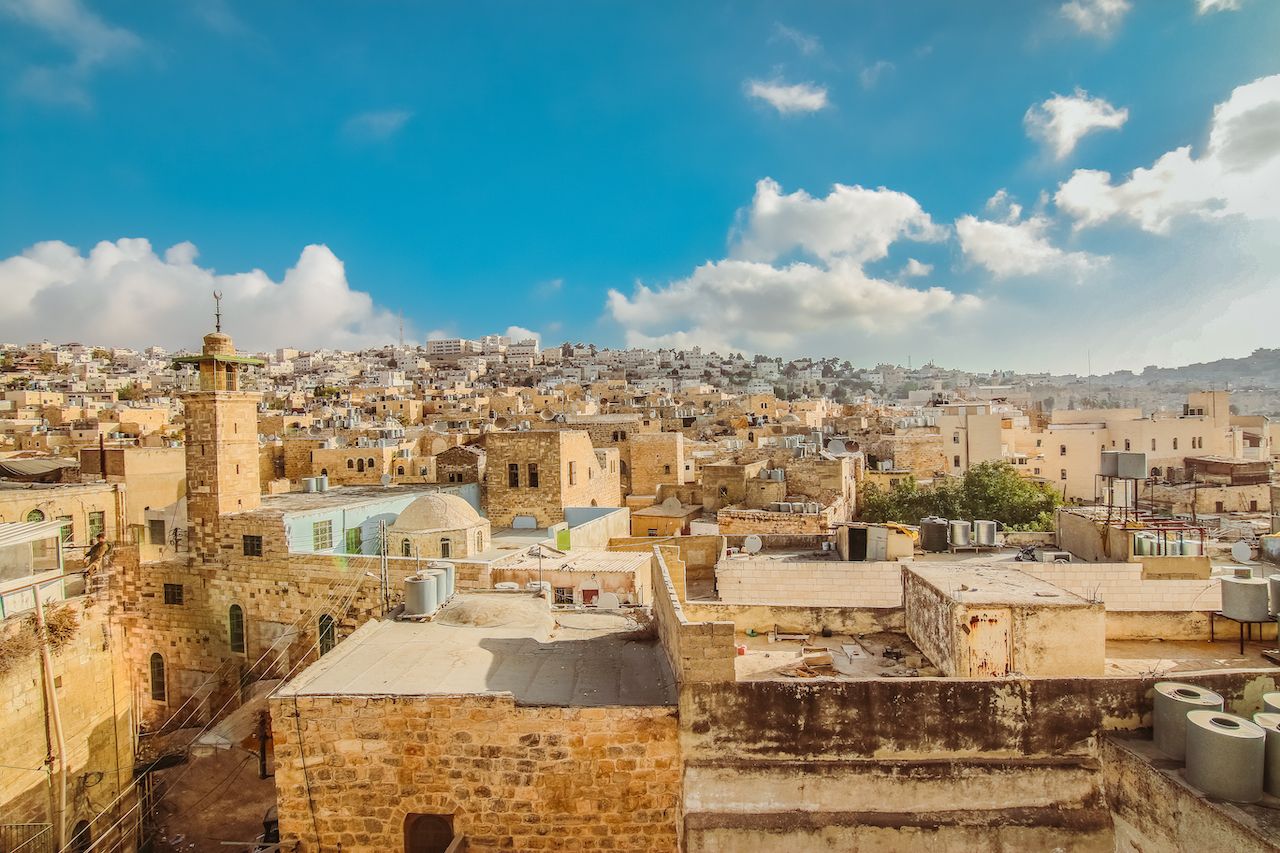 For decades, Palestine has been one of the most contentious territories in the world. But while it isn’t your typical tourist destination, it’s not just a warzone or a region perpetually embroiled in religious strife — it’s also home to five million people. And contrary to popular belief, it’s actually safe to visit.

The 2,400-square-mile piece of land surrounded entirely by Israel has been a center of the Israeli-Palestinian conflict since the 1940s and the center of a generations-long dispute rooted in religious heritage. Palestine encompasses the Gaza Strip and the West Bank, but as Gaza is closed to tourism, the West Bank is really your only option for visiting Palestine. The West Bank is divided into three areas (A, B, and C) and administered by Israel and the Palestinian Authority. Since the end of the Second Intifada war in 2005, the West Bank has enjoyed a period of relative peace, making it safe for visitors.

Bethlehem is one of the cities in Palestine with the most accommodation options, making it the perfect base for your trip. There, you’ll find an abundance of classic Palestinian dishes like schwarma and falafel, as well as desserts like kanafeh — semolina dough soaked in syrup and layered with cheese. It might not be Portland, but there are also several microbreweries in the West Bank, including Taybeh Brewing Company in Ramallah.

You can get there from both Israel and Jordan, though in both cases you will have to pass through Israeli checkpoints. Gaining entry should be relatively easy — just make sure you have your passport and visa ready at all times. 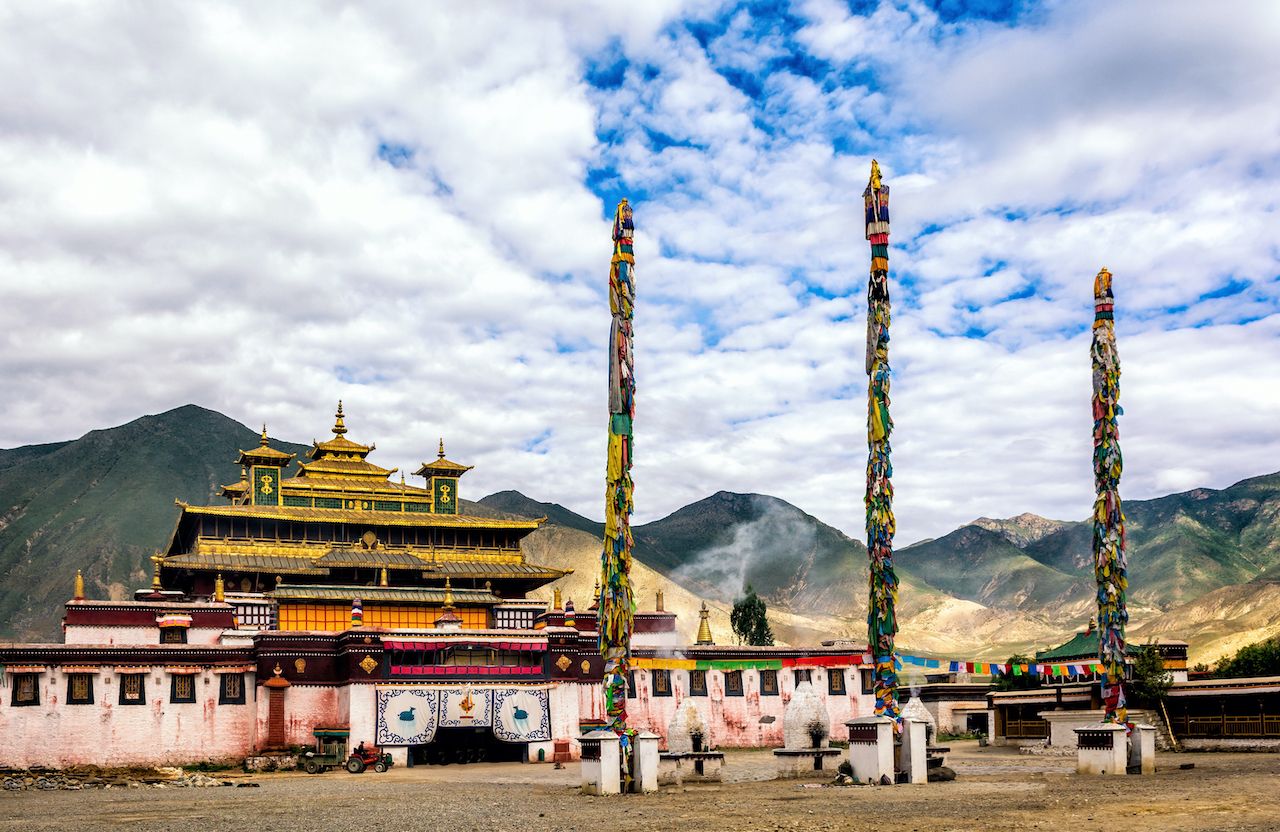 The ongoing territorial conflict between China and Tibet is known throughout the world, as is the difficulty of actually visiting the disputed territory. Tibet comprises almost a quarter of China’s total landmass and has been occupied by China since 1950. Although it is the traditional homeland of the Tibetan people, Tibet has been dominated by China for decades, and the area’s cultural identity has eroded over the years. The Tibetan people unsuccessfully attempted to rise against Chinese rule in 1959, resulting in the Dalai Lama (Tibet’s spiritual leader) maintaining a government in exile in India, from which he still has not returned. Tibet’s political and cultural relationship with China is complicated, but debate still swirls around the Tibetan independence movement and Chinese oppression.

As an international tourist, the only way to visit Tibet is through a guided tour with a registered Tibetan travel agency. You will also need Tibet and Chinese visas, neither of which should prove too difficult if you’re visiting with a legitimate tour agency, as it will guide you through the application process.

You might think that guided group trips suck the adventure out of a vacation, but in Tibet, pretty much everything feels like an adventure. Of course, there’s Mount Everest, the tallest mountain on Earth at 29,000 feet. But if your goal isn’t to spend weeks trekking to unfathomable altitudes, Tibet has an abundance of palaces, villages, monasteries, and natural beauty to keep you busy. Whether it’s visiting the birthplace of Tibetan Buddhism or going on the picturesque Kailash Mansarovar Yatra pilgrimage, Tibet is worth the extra work. 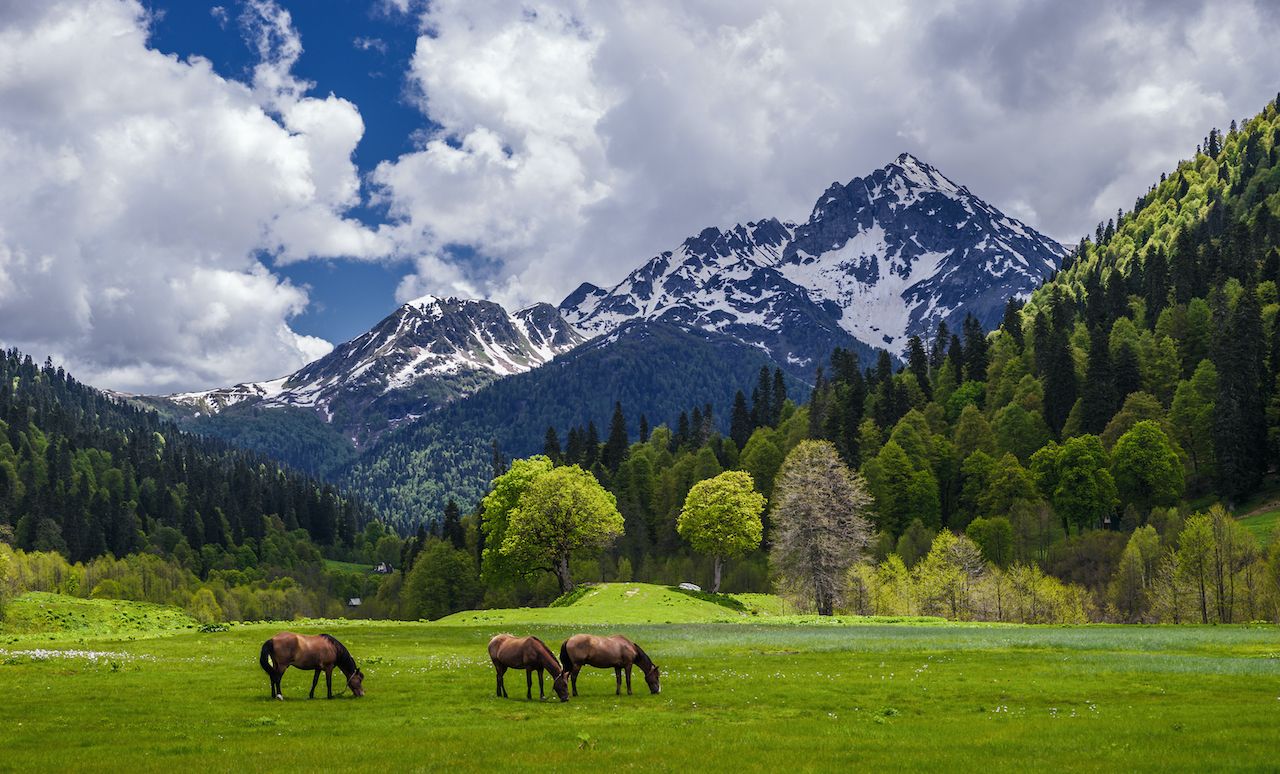 For many travelers, a trip to Georgia alone would be original enough. The truly ambitious, however, should look northwest to the region of Abkhazia, located between Georgia and Russia on the Black Sea. Having been incorporated into Georgia by Russia in 1931, Abkhazia grabbed the opportunity to secede when Georgia declared its independence from the Soviet Union in 1991. But Georgia would not let go so easily and waged a violent war that ended with Abkhazia’s victory. Although separated from Georgia since 1993, Abkhazia only officially declared its independence in 1999. There is still much dispute over the region’s independence, as Georgia believes the territory is its, and only a small handful of countries actually recognize Abkhazia’s autonomy.

The tug-of-war over Abkhazia certainly shows in its cultural influences — the people of Abkhazia use Russian roubles but speak a distinct Abkhaz language. In the days of the Soviet Union, Abkhazia was a popular tourist destination, with beaches, mountains, forests, and fortresses to explore. The capital of Sukhumi has many abandoned buildings (some residents were forced to flee back to Georgia after Abkhazia declared its independence) and stunning Byzantine and Soviet-era architecture, which makes it one of the most unique capital cities you’ll ever see.

Getting a visa to Abkhazia isn’t as tough as you might think. You just have to apply on the official website and then pick up your visa at the Ministry of Foreign Affairs in Sukhumi upon your arrival. The easiest way to get there is by taking the train from the city of Zugdidi in Georgia. Before entering, expect to encounter a Russian checkpoint (even though the region isn’t technically Russian). 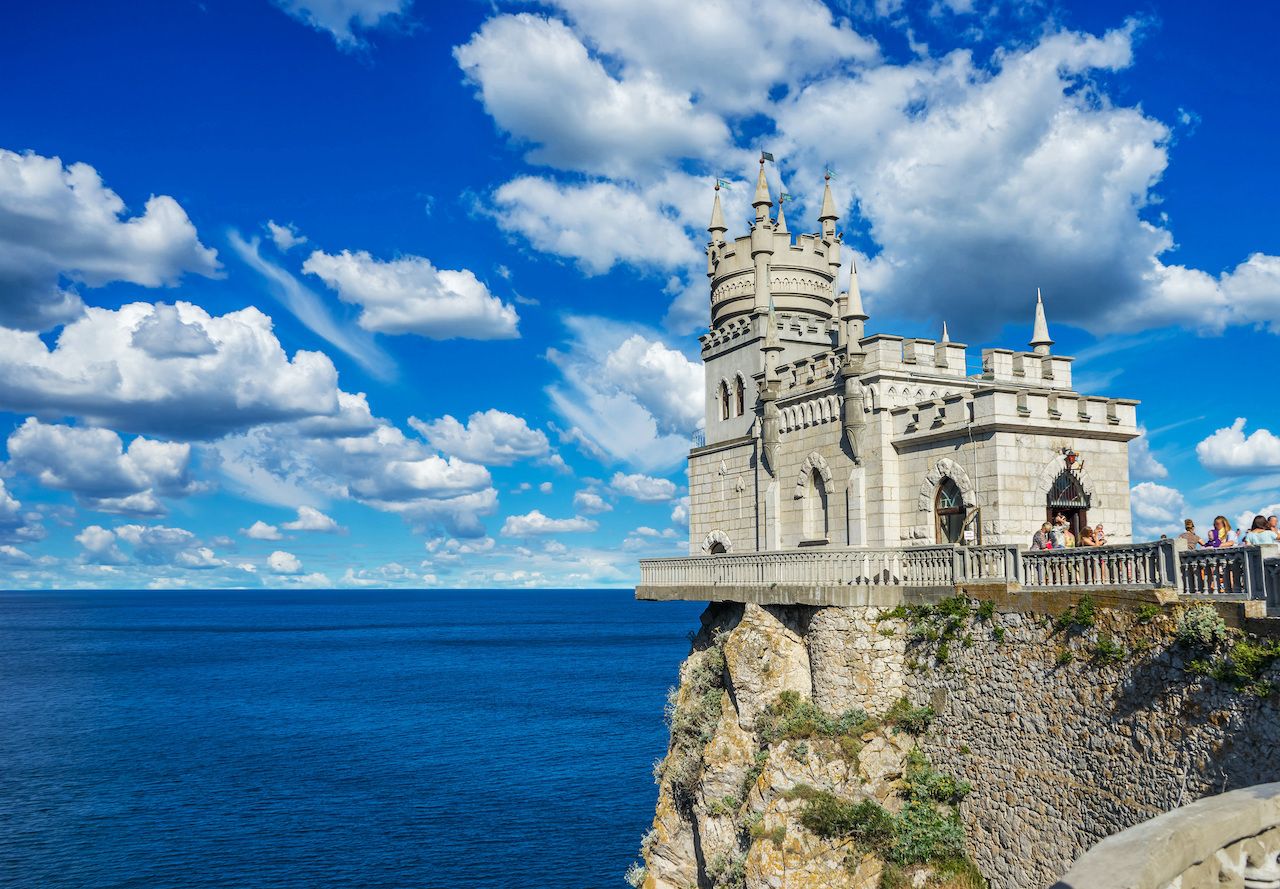 A Russian-controlled peninsula extending into the Black Sea, Crimea is both one of the most beautiful destinations in Eastern Europe and among the most contentious. Russia considers the Crimean Peninsula Russian territory since it was annexed from Ukraine in 2014, though Ukraine still claims it as its own, backed by the majority of international governments. Although Russia effectively controls and administers the area, the United Nations decries Russia’s aggression and supports Ukraine’s rights to the land. Now, the peninsula is the epicenter for Russian-Ukrainian tensions, occasionally boiling over into violence.

Since the Crimean Peninsula is under Russian control, visiting will require you to enter through Russia with a Russian visa. It’s important to note that given the territorial dispute, Ukraine considers accessing Crimea with a Russian visa a form of illegal entry to their territory, and could result in your arrest if you show any evidence of your trip while in Ukraine. Also note that since Crimea is a political no man’s land, consular services are largely unavailable, so access to an embassy should not be expected.

Although obtaining the necessary Russian documents isn’t exactly simple — especially for citizens of the United States — it’s worth it. There is a reason why Nicolas II, the last Russian tsar, and his family spent their summers on the peninsula. The beaches of Feodosia, sprawling vineyards, castles, and mountains make it a great vacation spot. History buffs will probably want to prioritize a trip to Livadia Palace in Yalta, summer home of the Russian emperors and where the famous conference took place in 1945 to determine the future of Europe following World War II. 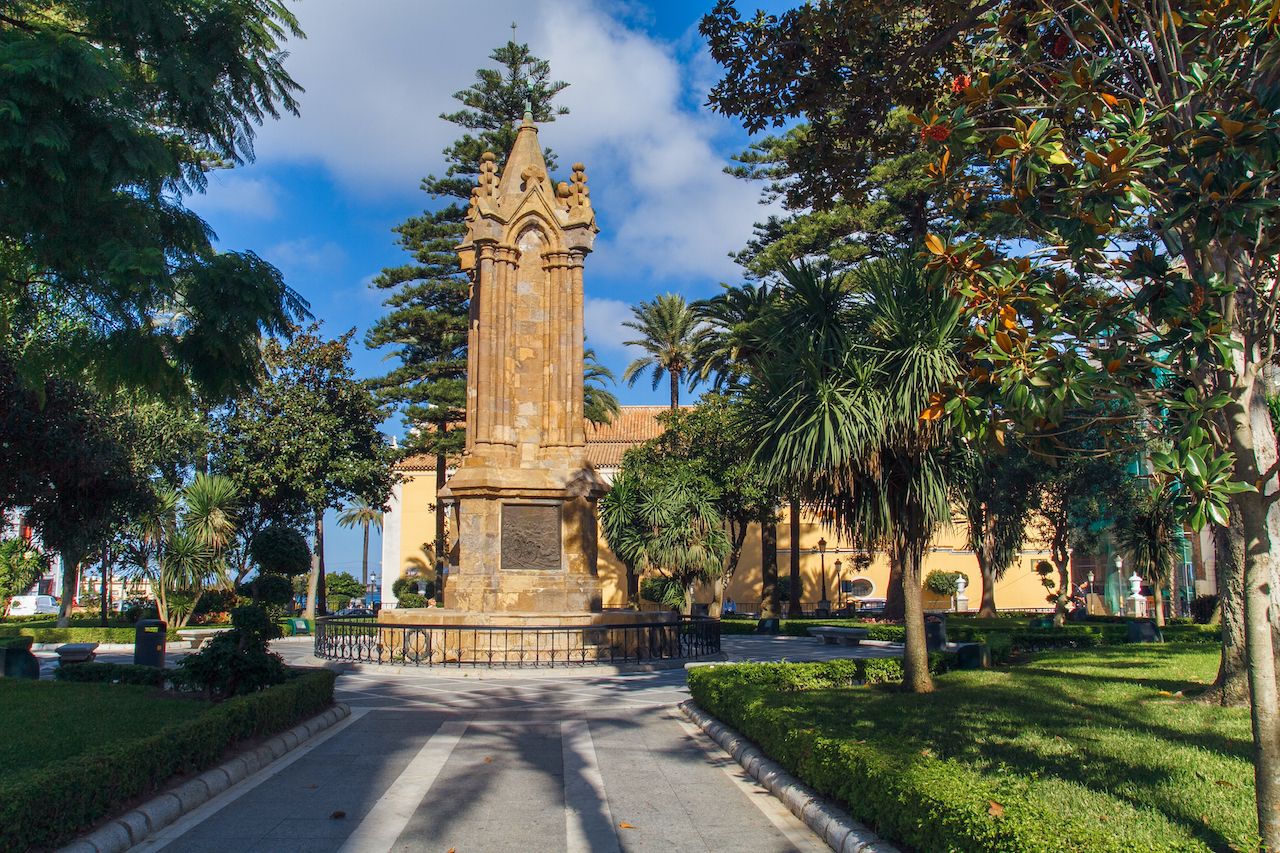 Ceuta is technically part of Spain, but it certainly doesn’t look like it. An autonomous Spanish enclave in North Africa, Ceuta is located directly across the Strait of Gibraltar in the northernmost part of Morocco. Spain and Morocco have long feuded over the territory, with Morocco claiming that Ceuta is a remnant of colonialism that should be relinquished, while Spain argues that since the area has been under Spanish control for 600 years, it has right to the land.

In spite of its geographic location, Ceuta bears a closer resemblance to Spain than Morocco. Ceuta’s cathedrals and monuments have a European aesthetic, and the euro is the currency. In the heart of the city, you can visit the cobblestone Plaza de Africa, home to a 19th-century palace, cathedral, and — in case you briefly forgot about the territorial struggle — a memorial to the soldiers lost in the Spanish-Moroccan war of 1860.

By land, Ceuta is only accessible via Morocco. You can take a bus to the Moroccan town of Fnideq, and then taxi to the border itself, and then walk a short distance to the city. You are required to fill out entry/exit forms at the border — as well as provide your passport — but these forms are readily available from border agents. Ceuta is also accessible by sea from Algeciras, Spain. 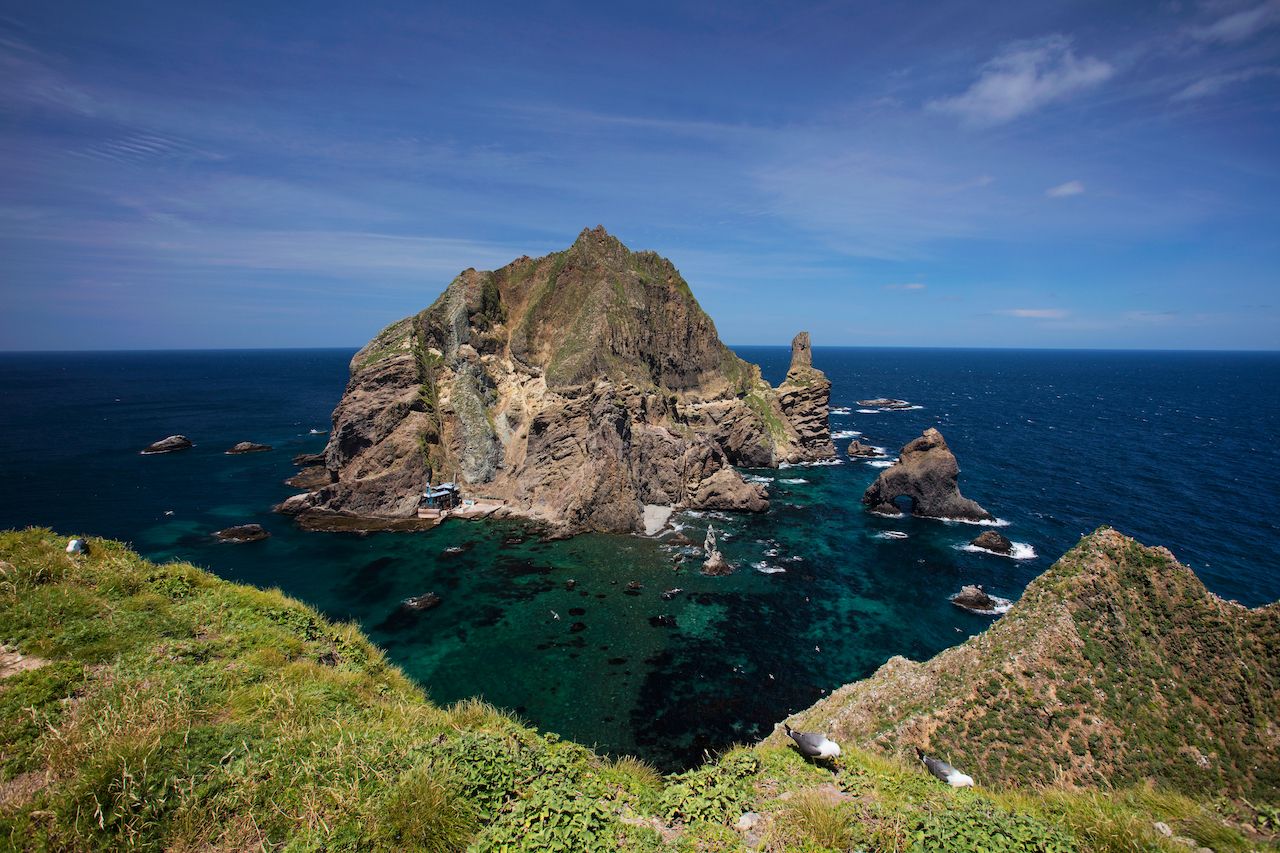 Unlike many other disputed territories, the Liancourt Rocks aren’t a particularly strategic piece of land, nor are they home to residents in the midst of a political tug-of-war. In fact, these islets in the Sea of Japan have just one permanent resident — an elderly fisherman who’s planning on leaving — and an acreage of under 50. Known as Dokdo to South Koreans and Takeshima to the Japanese, the Liancourt Rocks have been the center of a territorial dispute between South Korea and Japan for 300 years.

Although Japan supposedly recognized the islands as a Korean territory in 1696, Japan claimed Liancourt Rocks in 1905 when it occupied South Korea. After WWII, when Japan left Korea, the islands were reportedly restored to the peninsula. Both nations have been claiming the islands since then, with Korea establishing a military base on the east island.

Reaching the island will require you to take two three-hour boat rides from the South Korean peninsula. You shouldn’t have any trouble gaining entry to Liancourt Rocks, though it’s mostly Korean citizens visiting these days, staking their claim to the area.

Once on the islets, you have 30 minutes to explore restricted parts of the east island. 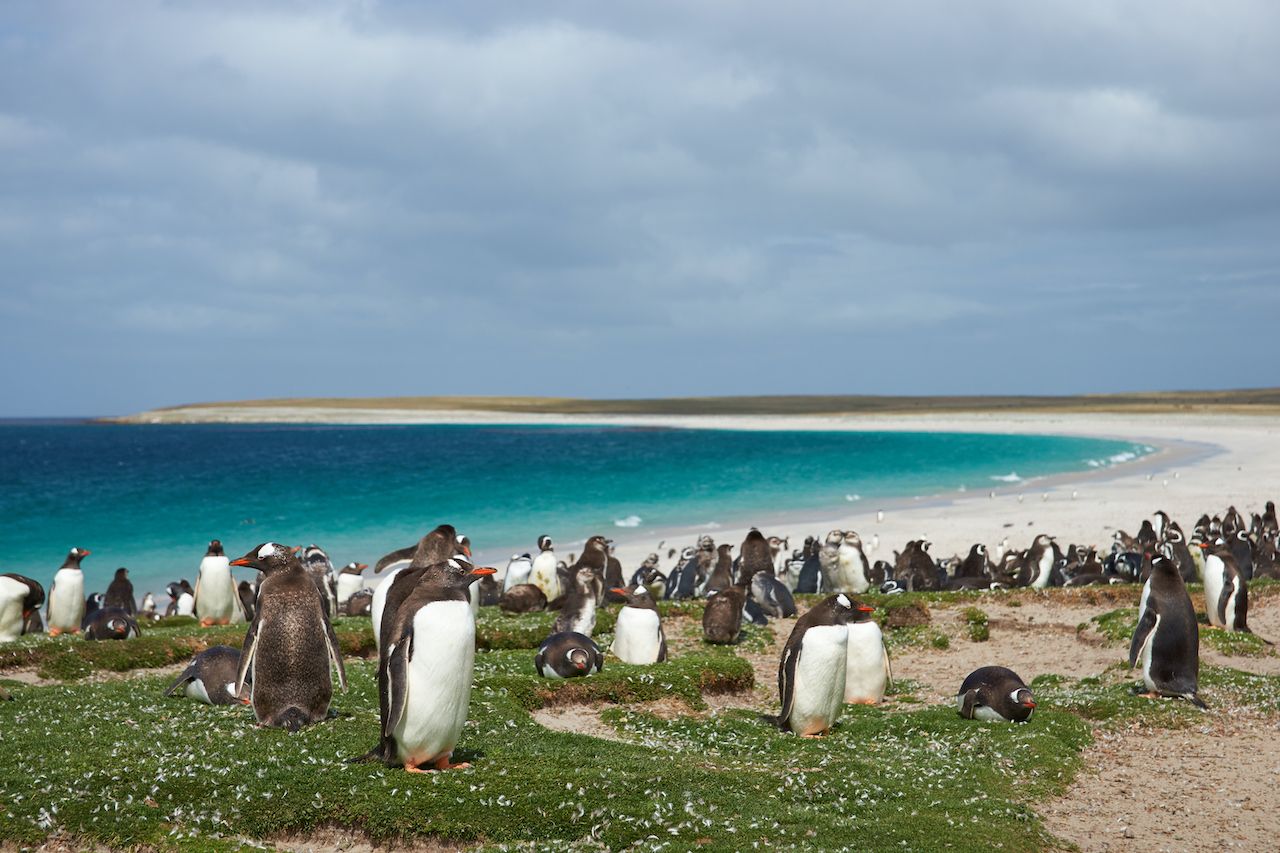 The Falkland Islands are a self-governing British Overseas Territory in the South Atlantic Ocean, whose residents control the island’s future and politics. However, the islands are still the center of a contentious dispute between the United Kingdom and Argentina, which fought a war over the small territory in 1982. Despite Argentina’s surrender to the British on June 14, 1982, the nation still claims ownership of the islands.

The islands are relatively remote, but they’re accessible via flight from the UK, South America, or by taking a cruise ship. The UK flight departs from RAF Brize Norton airport, flies directly to the islands, and must be booked directly through the Falkland Islands Government Office. From South America, you can fly from Santiago de Chile airport. If you prefer to visit via cruise, ships regularly visit the islands between October and March, often traveling between Brazil and Argentina.

In Stanley, the capital of the Falkland Islands, you can visit the Historic Dockyard Museum. The museum houses relics from the islands’ maritime past, exhibits from the 1982 war, and artifacts from fishermen who once lived there. The islands are probably best known, however, for their abundance of wildlife, particularly penguins. There are five different penguin species on the island, and the animals greatly outnumber people.

CultureThe 7 Most Inhospitable Climates People Actually Live In
Tagged
Travel
What did you think of this story?
Meh
Good
Awesome