Among Hong Kong’s many accolades — including being a global hub for both finance and street food — one is responsible for moving you about the commercial district with ease, and we’re not talking about tuk-tuks, motorbikes, or even Uber. This Special Administrative Region off the Chinese coast is home to the world’s longest outdoor covered escalator system. Stretching over 800 meters, or about a half mile, and gaining 135 meters in elevation, the Central-Mid-Levels Escalator system carries more than 85,000 people on its 18 escalators and three inclined travelators every day.

This byway is among the most unique charms of the city, home to incredible food and plenty of shopping. The system moves enough interesting characters that keeping focused on the task at hand (riding — and successfully exiting — an escalator without a stumble) is often a tall task in itself. Here’s everything you need to know about the Central-Mid-Levels escalator, and what to see and do along the way.

What is this system all about, and what the heck is a travelator? 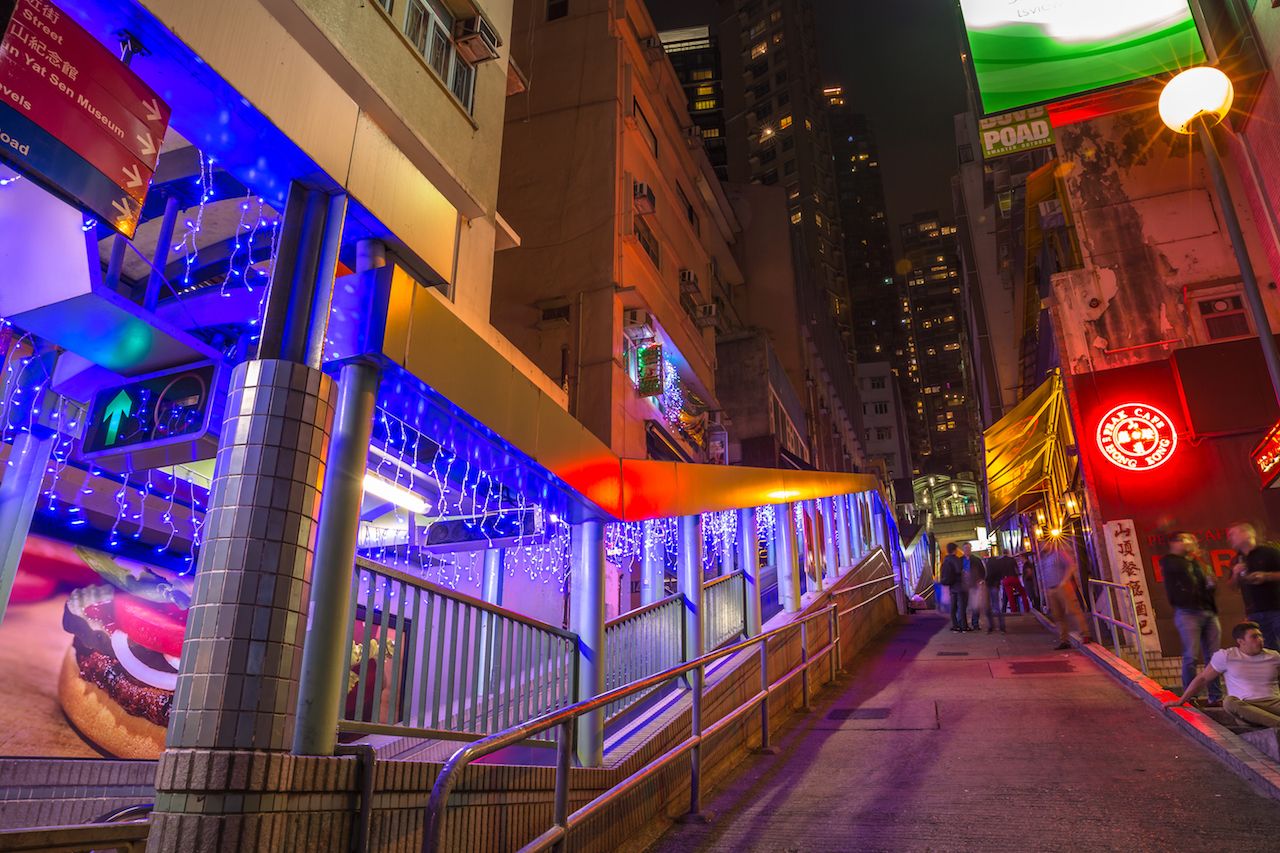 The Mid-Level Escalators connect Hong Kong’s central business district to the homes, shops, and restaurants located in the terraces and streets circling the city’s jungle-covered hills. For over 25 years, the Mid-Levels Escalators system has been part of the commute of Hong Kongers in the central area and used by locals to navigate up and down the steep hills of the SoHo entertainment district. The escalators themselves are pretty straightforward — they move you from Point A to Point B at a different level of elevation. Travelators, as they’re known here, are basically just moving walkways like you’d see in an airport terminal. Start your trip at the IFC Mall/Hong Kong Station and use the connecting walkways to head towards your first travelator at Queen’s Road Central.

The escalator is a one-way system that goes from south to north — or, in this case, up the hill — except during the morning rush hour (6:00-10:00 AM) when it’s put in reverse to allow commuters to use it to go down from their homes in Soho and the Mid-Levels to work in Central. In Hong Kong, it’s standard practice to stand to the right-hand side if you are walking slowly or standing on an escalator to allow for people at a faster pace to move past you on the left.

The escalator is being updated between 2018 and 2022, and different parts of it will be under maintenance at varying times. Check before you go, but remember, it’s still possible to walk the whole thing on the path and steps that run alongside the escalator system.

Why is the system useful? 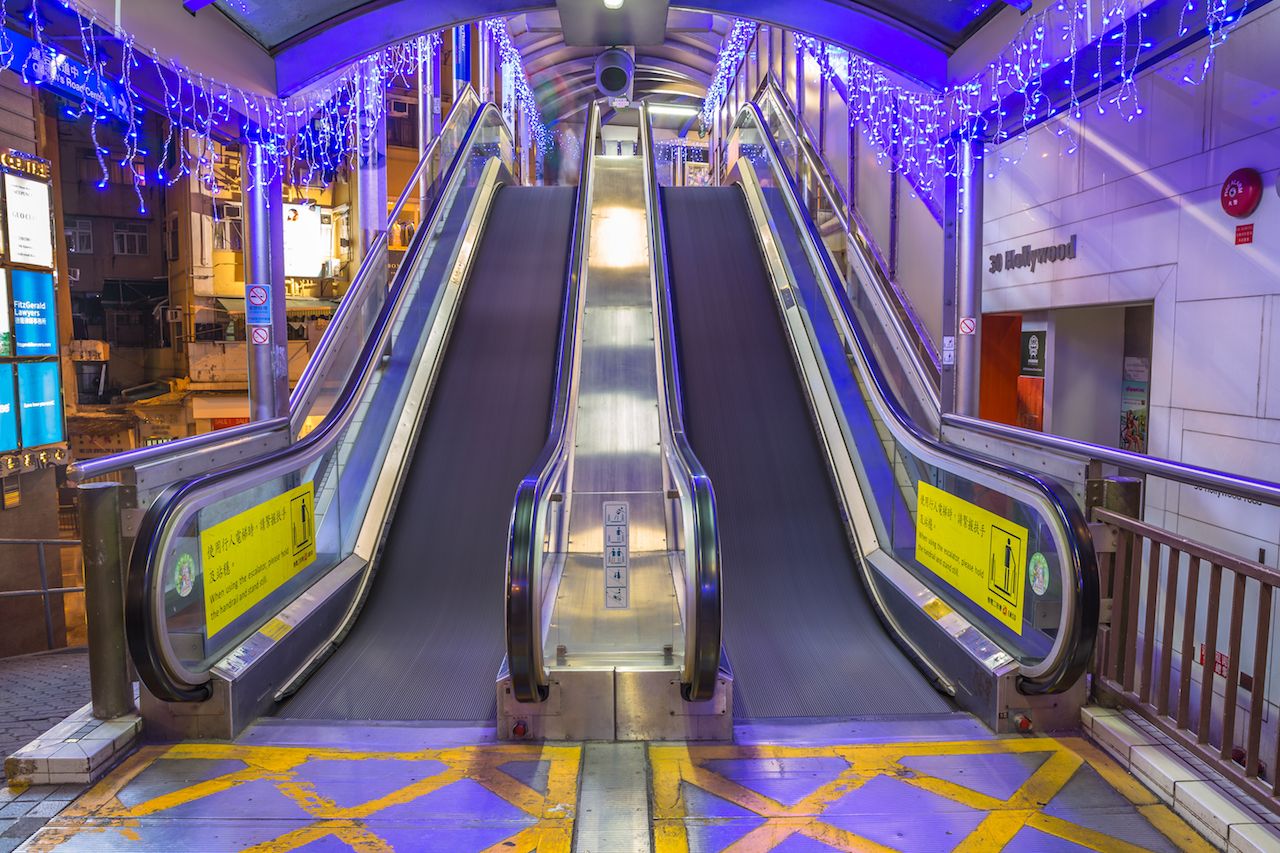 Built in 1993, the Mid-Level Escalator helps pedestrians easily bypass the busy streets and roads below and makes the steep inclines a little more palatable in the city’s humid heat. Climbing a near-vertical sidewalk on a sweltering August afternoon is no fun — and a major deterrent for shoppers, diners, and residents making their way to work. While the escalator systems aren’t air-conditioned, they do prevent you from breaking a sweat beyond the standard state of perpetual perspiration that most everyone finds themselves in over Hong Kong’s summer months.

As a traveler, you can take advantage of the system for an incidental tour through the center of the city, with quirky second-story shops on display throughout the journey that beckon you to hop off for a quick detour. You can glance through the glass fronts of barbershops and restaurants along the way while enjoying a one-of-a-kind automated people-watching experience.

The escalators are the best way to try tons of food. 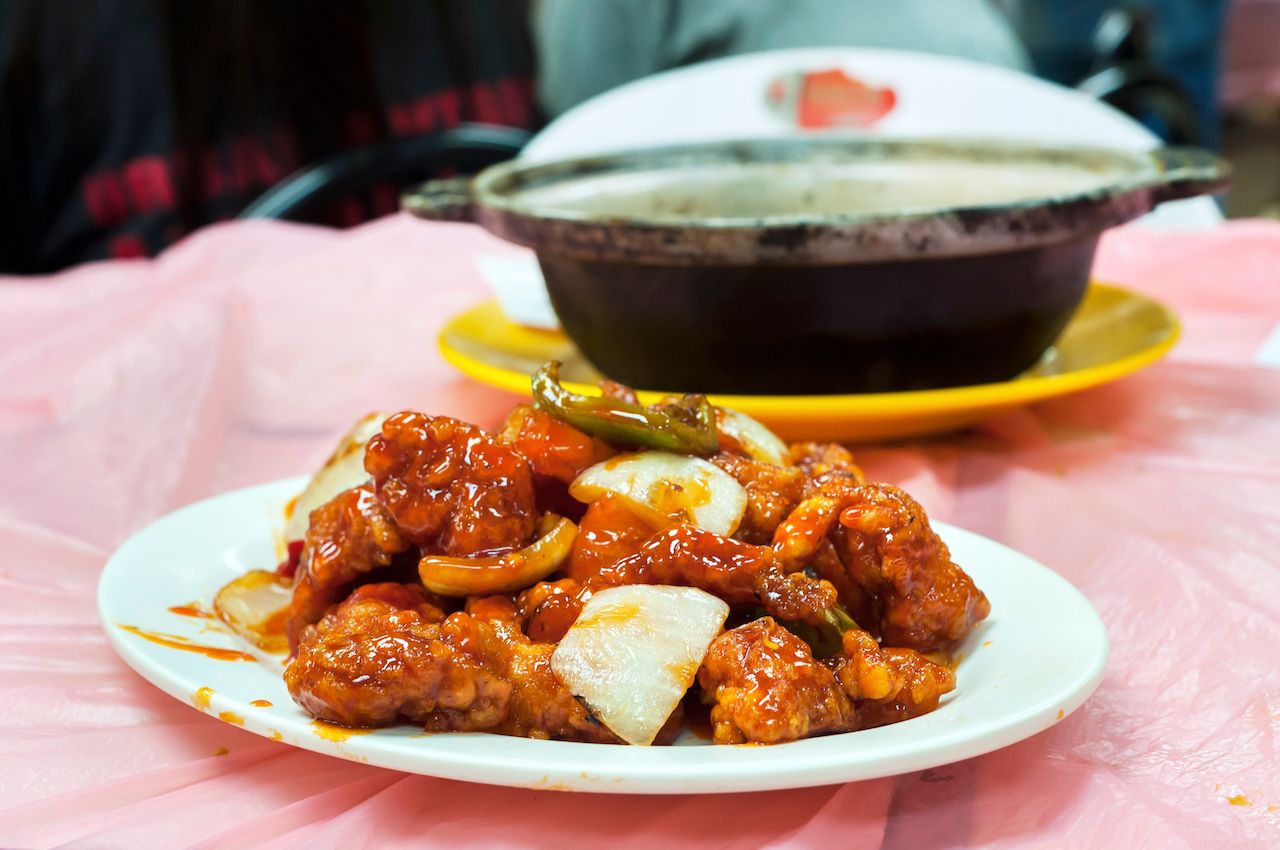 You’d be a fool to work your way all the way through the escalator system and exit on an empty stomach. The system offers walk-up access to some of the city’s best dining options. First, step off the escalator at Stanley Street and stop for a bite to eat at one of Hong Kong’s last dai pai dongs. Literally translating to “big license stall,” these open-air diners used to be commonplace around Hong Kong — however, stricter licensing and increased food safety concerns have meant all but a handful have been shut down in recent years. A meal here is best shared between a group as portions tend to be quite large. If you’re looking to try some classic Cantonese dishes, opt for the scrambled eggs with shrimp, eggplant clay pot, and clams with black bean sauce.

Where to have a drink along the way 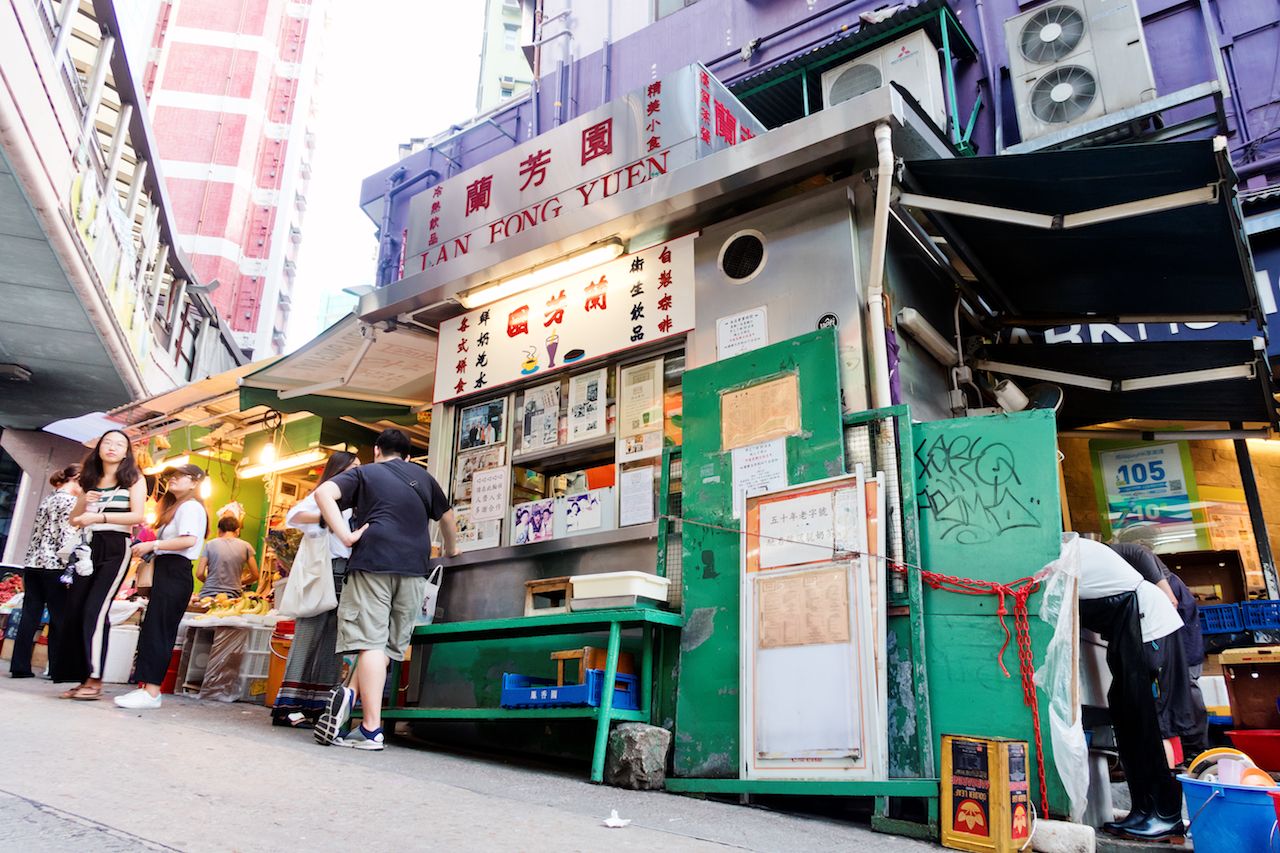 Not to be missed as you work through the system is a stop at Lan Fong Yuen Milk Tea. This Cha Chaan Teng (or “tea restaurant”) on Gage Street is a Hong Kong institution, having been around since 1952. It has received particular notoriety in recent years thanks to the Instagram generation, which seems to love its retro appearance. Serving up classic Hong Kong milk tea — a sweet and creamy version of its English counterpart using evaporated milk — you can order yours served hot or iced.

Soho is known in Hong Kong for its vibrant nightlife — unlike it’s Lan Kwai Fong counterpart, the audience here tends to be slightly more mature and the focus is on good drinks in nice bars rather than 7/11 beers and raucous clubs. That doesn’t mean it doesn’t get rowdy: Staunton’s, just off the escalator system on Staunton Street, often has revelers pouring out onto the street side and is great for a casual pint.

One escalator up on Elgin Street, you’ll come across a thorough selection of bars and restaurants. Fini’s and Posto Pubblico offer a free-flow happy hour on weekdays from 5:00 to 7:00 PM while Cicada’s goes every day from 3:00 to 7.30 PM. In general, there are always options for a well-priced tipple on your journey.

What else you should do 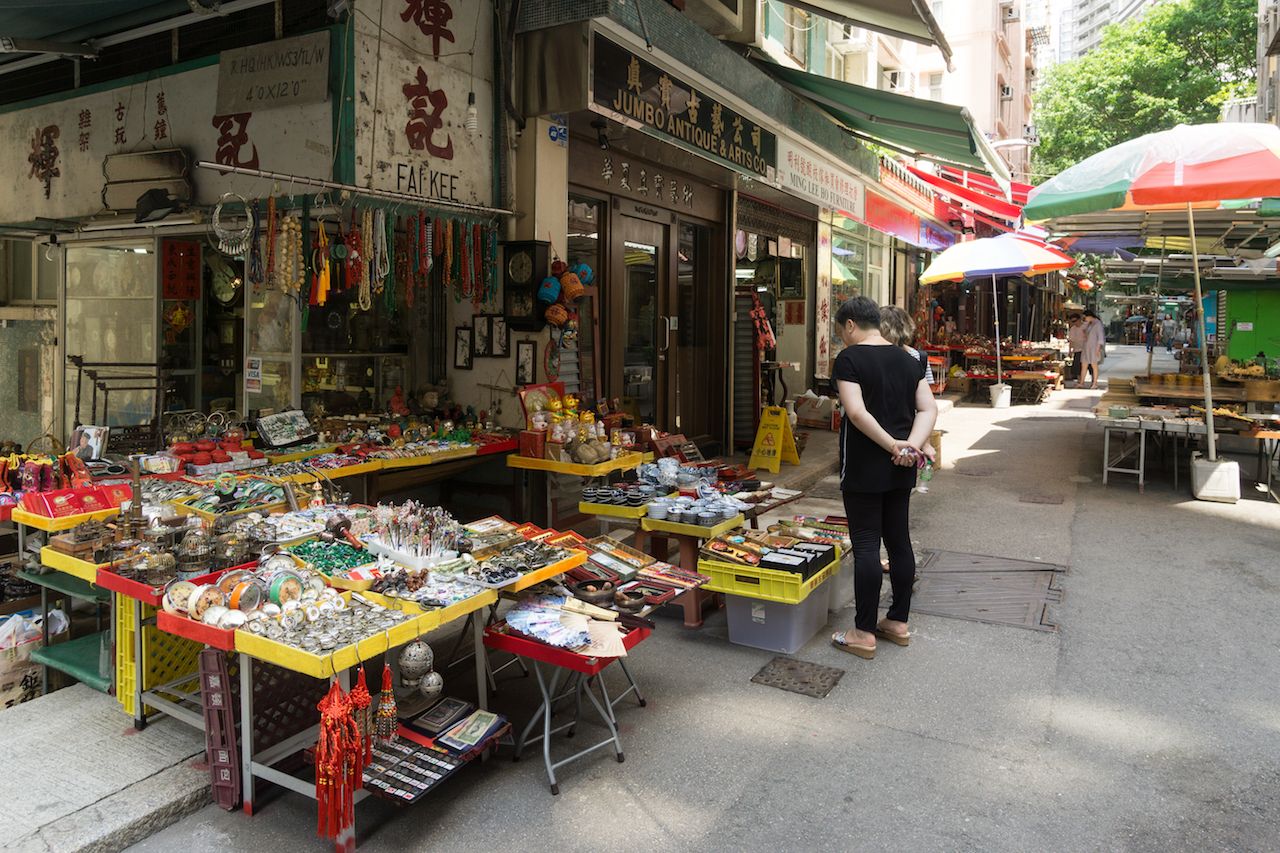 Opened after more than a decade of refurbishments, the Tai Kwun Heritage and Arts Centre can be accessed from the escalators itself — you can’t miss the striking red-brick building and wide steps leading into the courtyard. Formerly known as Victoria Prison, Tai Kwun was built as a prison and police barracks in 1841, which operated until it was finally decommissioned in 2006. The building has been tastefully refurbished and opened in 2018 as a heritage site, presenting a variety of courtyards, exhibits about the Central and Soho neighborhoods and prison history, as well as art shows and a variety of bars and restaurants.

Once you’re into Soho, you’ll notice that walls become decidedly more colorful. While there are street-art walking tours during which you can see all of the gorgeous murals from Soho to Sheung Wan, there’s a few you can see on your own within a stone’s throw from the Mid-Level Escalators. The blue-and-orange cityscape mural on Graham Street has become one of the icons of Hong Kong, and you’ll either love it or hate it. The Laughing Lady, one street over outside of a Brazilian restaurant called Uma Nota, is often a little less crowded but arguably more impressive.

And then there’s the shopping. As your strolling along — or standing on — the Mid-Level Escalators, you’ll notice that along street level there are countless stores and eateries lining the sidewalk. For quirky, Hong Kong-specific souvenirs, hop off the escalator at Wyndham Street and pop into Goods of Desire (G.O.D). This local lifestyle store has a selection of clothing, soft furnishings, candles and soaps, teas, cards, artwork, toys, and gifts with a distinctive Hong Kong flair.