In northwestern India, the high-altitude desert-scape of Himachal Pradesh state is home to a region that looks and feels far more like Tibet than it does a piece of the subcontinent. Spiti Valley sits at altitudes of over 10,000 feet. Here, the browned, spired peaks and extensive valleys reminiscent of South American pampas make reaching this somewhat hidden hamlet just as much of an adventure as traveling through it. Quite literally the “Middle Land” in between India and Tibet, Spitians are primarily Buddhist and historical records show they have been living in the area since the 10th century. Today, the district is a treasure trove of monasteries, mountains, and the tranquility that the Himalayas are known for. Here’s exactly what you need to know about the magic that is Spiti and how you too can experience its geographically unique beauty.

How to reach Spiti Valley 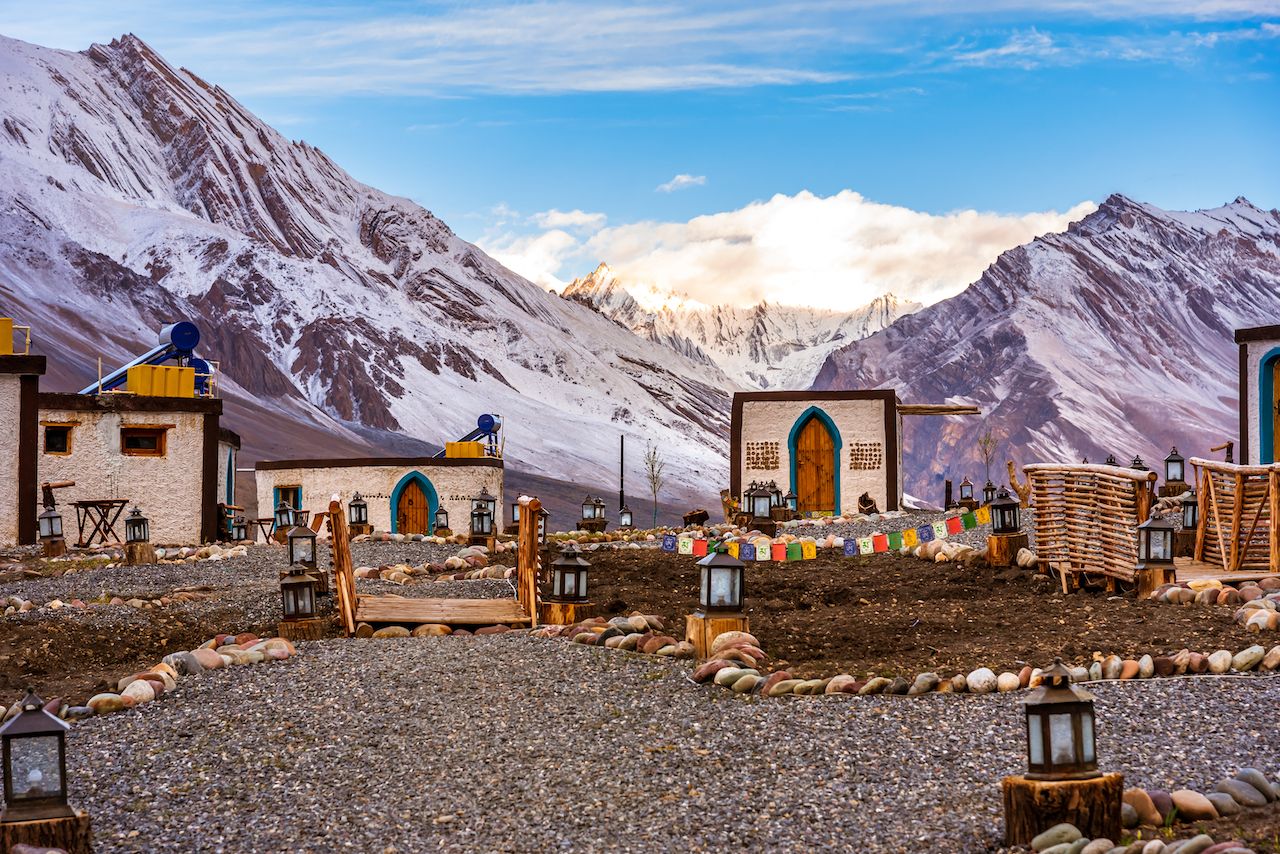 The only way to Spiti — which literally translates to “Middle Land” — is on wheels. There are no airports anywhere near its villages, and the roads that lead in and out are composed of rock and dirt that’s been hastily carved from the cliffside. There are many times when it’s no over-exaggeration to say you’d be better off walking – a road trip to Spiti is certainly not for the faint of heart. Many find it worth the effort, however. Spiti’s rugged terrain and open skies devoid of any light pollution are an adventure lover’s paradise.

It’s because of this that Spiti receives far fewer domestic visitors compared to Himachal Pradesh’s other locations, even despite its natural beauty, and foreign tourists are even rarer. Yet a visit to this extraplanetary-looking valley is well worth the arduous journey. While other mountainous Indian locales such as Ladakh are connected by well-paved roads, Spiti is absolutely not. There are two ways to reach the valley and both ply through some treacherous – albeit epic – terrain.

Both routes are not created equal, though, with one being far safer than the other. While you might think this has to do with road conditions, it all comes down to altitude. The riskier “Manali Route” involves first reaching the only somewhat-trendy town in the area, Manali, before finally continuing to Kaza, Spiti’s capital and largest village. Though scenic, this course involves going over not just one but two high-altitude passes. So aside from being blocked by snow until sometimes as late as June, this way of travel puts you at significant risk for AMS (Acute Mountain Sickness) which can be dangerous, if not deadly.

Luckily, the alternative is much safer and it allows you to break up your journey, something you’ll definitely want to do once you get a taste of Indian roads. On this route, travelers will first need to make it to Reckong Peo, a quiet crossroads where you’ll finally be able to see some snowcapped peaks up close.

You can easily find a ride via bus to Reckong Peo from either Chandigarh, Shimla, or Rampur, all three of which can be reached from New Delhi’s ISBT (Inter-State Bus Terminal). If you’re in a rush, it’s also possible to catch a bus from New Delhi straight to Reckong Peo, but be forewarned that the ride will be extremely long and painful.

Reaching Rampur first is your best bet, as the town has comfortable and cheap hotels and delicious street food. A ride from Rampur’s local bus station to Reckong Peo takes 6-8 hours and costs around 200 rupees, or $2.76. Certainly not as bad as a 24+ hour expedition from the capital.

Once you’ve received your Inner Line Permit in Reckong Peo (necessary for foreigners traveling into Spiti), you can hop on a bus to Nako, which is the first major destination within Spiti. Buses to Nako from Reckong Peo tend to be the least squished (a common occurrence in this remote region), take about 5 hours, and cost 175 Indian rupees per person, or $2.42.

What is an Inner Line Permit? 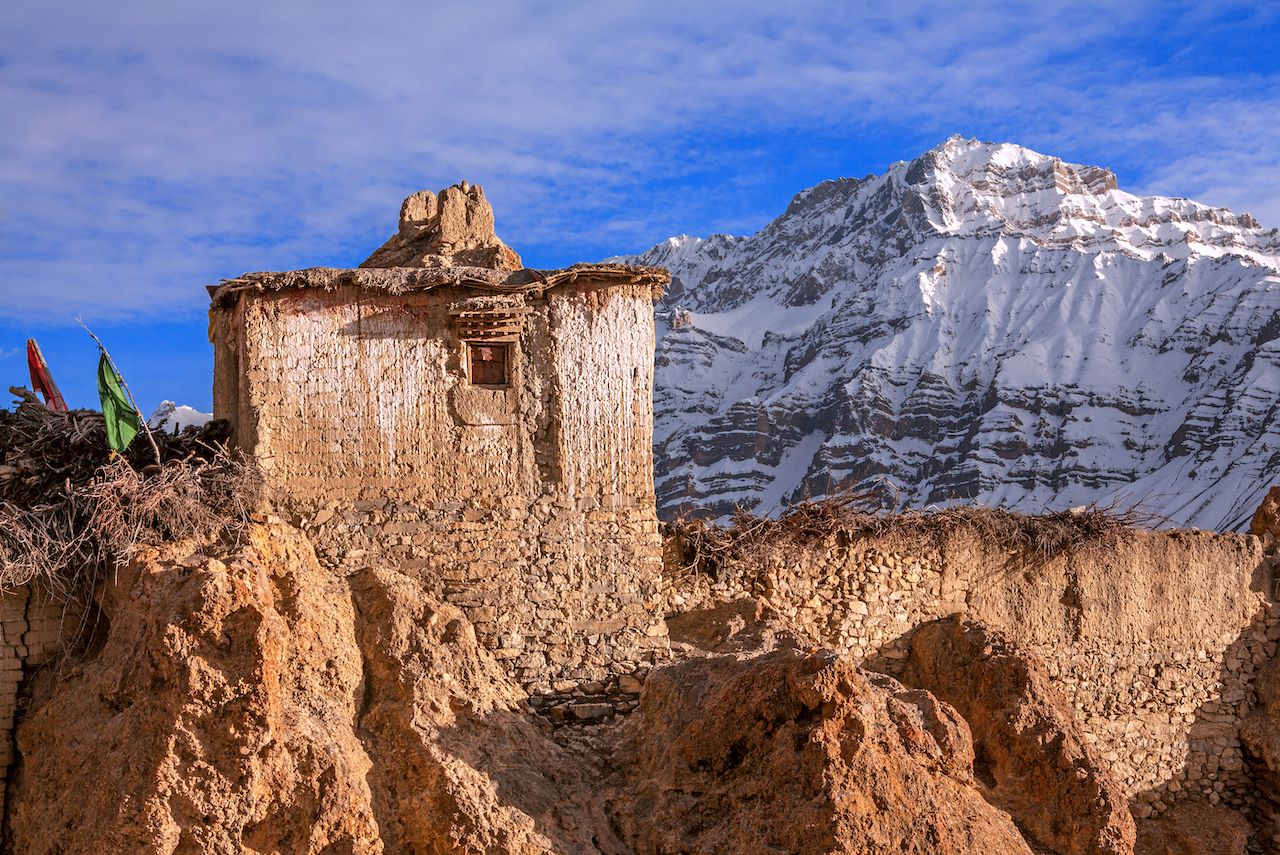 Due to its proximity to China, all foreigners looking to explore Spiti Valley must get an Inner Line Permit, also known as a Protected Area Permit. The easiest place to get one is at Reckong Peo’s District Magistrate’s office, which is located on Khwangi Road within walking distance from all local hotels.

Though the permit is officially free, it’s not possible to acquire it without being sponsored by a tour company and said companies do, in fact, charge a fee. On the bright side, the tour company offices are conveniently located right next to the DM building and they usually provide you with the official letter in an hour or less. Expect to pay between 200-400 rupees ($2.76-5.52) for this service.

After you have your letter, you can head over to the DM’s office where they’ll take your photo on a webcam and hand you your permit, which will be valid for 14 days. If you’d like to stay longer than 14 days, you’ll need to get another permit, which you can do in Kaza.

Things to do in Spiti Valley 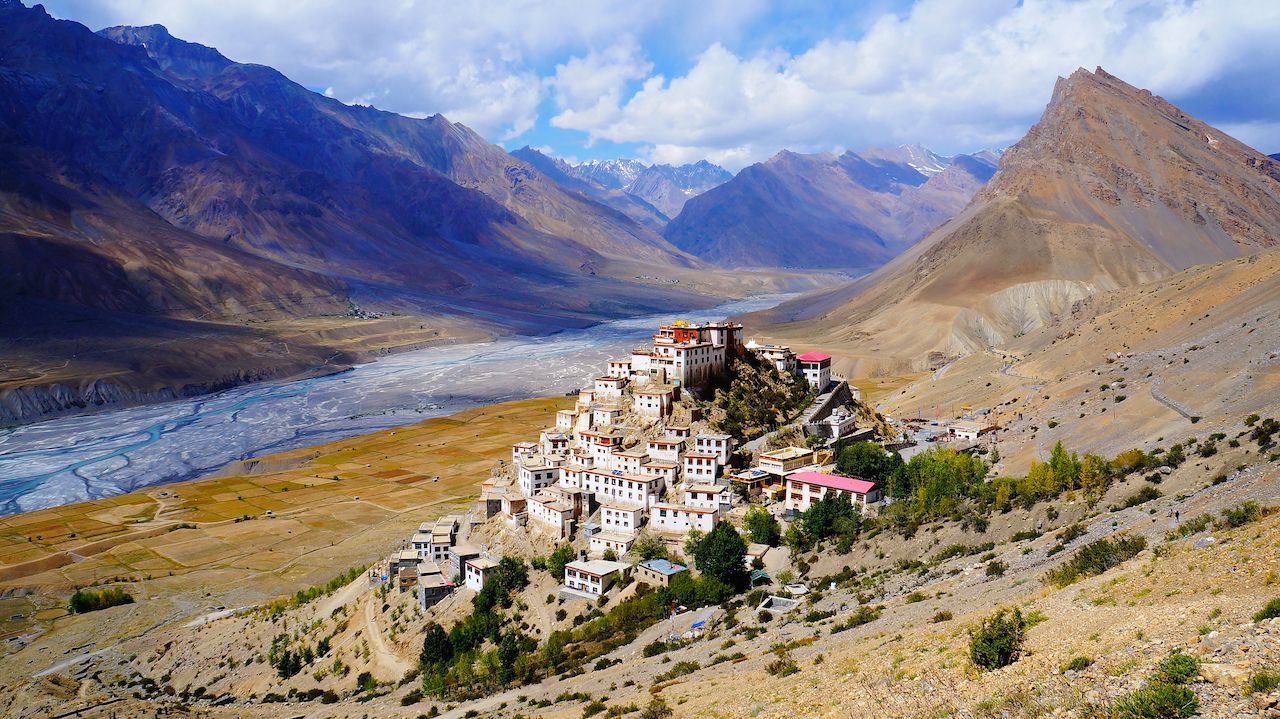 Once you arrive in Nako, your Spiti Valley adventure will officially begin. Spiti is filled with numerous villages, and each has something slightly different to offer. Nako is an idyllic place to start as it features a small lake along with an 11th-century monastery that overlooks the vast peaks that surround it.

After spending a day or two enjoying the peace and quiet of Nako, catch a bus or hitch a ride to Tabo, which is the oldest continuously operating Buddhist enclave not just in India, but in the entire Himalayan region.

The Tabo Monastery is a historical highlight of the small village, as it was founded in 996 CE. Though no photography is allowed inside, you won’t soon forget the dozens of frescoes and murals that grace the monastery’s inner walls.

Before you leave the village, you must try phakse, a local dish that resembles a plate of gnocchi topped with tomatoes. Other popular Spitian eats include thukpa (a noodle-based soup) and butter tea, which is made from yak butter, water, salt and is most definitely an acquired (but interesting) taste.

For active adventurers, Dhankar Village offers one of the most rewarding treks in the valley. The trail to Dhankar Lake, which sits above 14,000 feet, isn’t long, but the altitude will make the route feel difficult for even the most athletic of travelers. Don’t be surprised if you find yourself gasping for air after a few feet — this a trail that demands slow, steady progress. But with great struggle comes great reward. Those that tough it out will be greeted by a stunning lake that’s often surrounded by fluffy, grazing yaks. 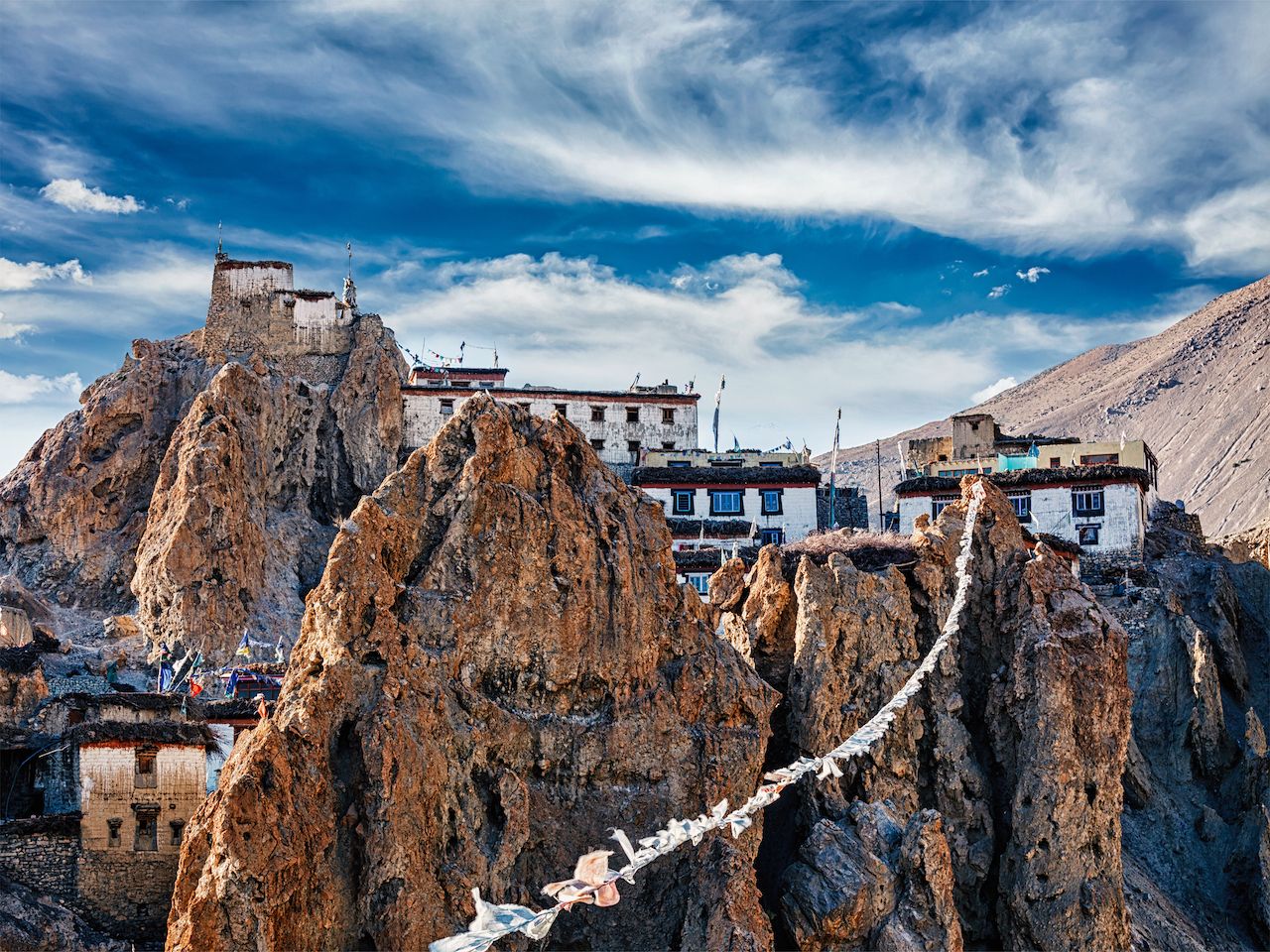 If you really want to feel like you’re on another planet, visit Mud Village. Perhaps the most remote place in the entire valley, Mud is the last inhabited village in Pin Valley (an offshoot of Spiti) and contains some of the region’s most mesmerizing views. Trekking enthusiasts will be pleased to know that it’s also possible to head out on some stunning day treks along local trails. Mud can be reached either by a daily afternoon bus from Kaza or if you’re feeling adventurous, via hitchhiking. The Tara House Homestay is most popular with travelers, but if it’s full as is common during high-season, numerous other homestays can be found throughout the village.

A journey further into Spiti provides the opportunity to see its most iconic sites as well as visit some truly offbeat locales. Key, which might be the most well-known landmark in all of Spiti, is the largest monastery in the valley and sits perched on a hill. Make sure you take some time to appreciate its ancient internal murals and grab yourself a panoramic glimpse of the valley from the monastery’s highest point.

One of the best things about Spiti is that it’s very easy to leave the so-called “tourist trail” as many visitors simply do not venture off the main road. After you’ve made it to Kaza, an array of options will open up thanks to frequent local buses and a plethora of taxi drivers.

You can take a trip to Komik, which at just over 15,000 feet, is the world’s highest motorable settlement. Stay the night in a homestay, and make sure to bring your camera as Komik’s night sky is an astrophotographer’s dream. Meanwhile, the nearby Langza Village features a 1,000-year-old colorful Buddha statue and Hikkim (also in the vicinity) is home to the planet’s highest-altitude post office. All three can be reached on foot, which is the absolute best way to really get a feel for the area.

And for those who want to get seriously remote, trekking from Demul Village to Lhalung Village will allow you to do just that. A local bus leaves for Demul from Kaza at 5:00 PM each day, and it should take you no more than 2 hours to reach the remote and infrequently visited settlement. Aside from making the several-hour trek to Lhalung, you’ll also be able to enjoy truly authentic homestays, as Demul’s homestay system is one of the most sustainable in all of Spiti.

From its otherworldly landscapes to its rich culture and unique cuisine, Spiti Valley gives travelers a chance to experience Tibet, sans the astronomical fees and restrictions. For those unafraid of a long journey to a truly remote land, the enchantment of Spiti awaits.

ReligionEverything You’ve Ever Wondered About Holi, India’s Festival of Colors
Tagged
Culture Travel India
What did you think of this story?
Meh
Good
Awesome