There are plenty of ways to learn about Indigenous culture in the United States. You can visit Native American heritage sites across the country for much-needed history lessons. You can check out museums and heritage centers or take part in events that focus on Native American culture. You can follow Indigenous photographers and travelers on Instagram. But one of the most beautiful and fulfilling approaches to gain insight into the many Tribal Nations in the US and support their people is to seek out, admire, and purchase their traditional art. Through ancestral techniques in carving, pottery, jewelry, and more, Native American artists keep their culture thriving. Here are six art forms practiced by Indigenous people in the US and where you can observe the process, buy the finished product, or maybe even try your hands at something meaningful and stunning. 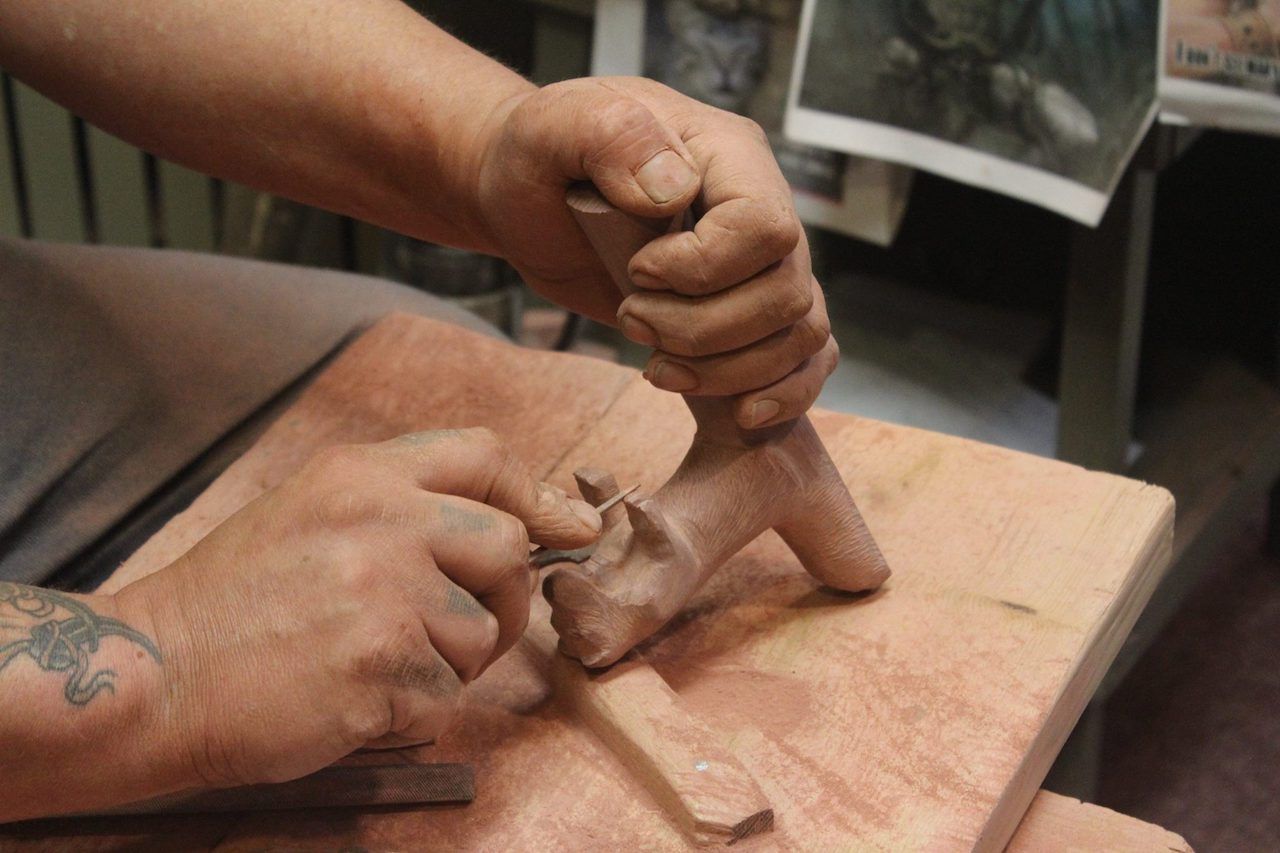 Pipes have played a significant role in the lives of Native American people as smoking was seen as a spiritual practice — it is believed that the rising smoke from a pipe carries prayers to the Great Spirit. Examples of stone pipes dating from 2,000 years have been found in Ohio, and the tradition of pipe carving is still alive today in the Midwest. Starting in the 17th century, Native Americans started digging at Pipestone’s quarry (today Pipestone National Monument in Minnesota) to extract the pink-red soft stone and make stone pipes, some of which were extremely intricate. To this day, anyone with Native American ancestry can obtain a permit to quarry pipestone.

Pipestone National Monument has exhibits and demonstrations by pipestone carvers in its visitor center. The Keepers of the Sacred Tradition of Pipemakers, located in Pipestone, Minnesota, on the way to the national monument, offers pipe-making workshops and pipestone carving workshops. There is also a gift shop and a gallery on the premises where you can purchase pipes and other art pieces made by native Americans. 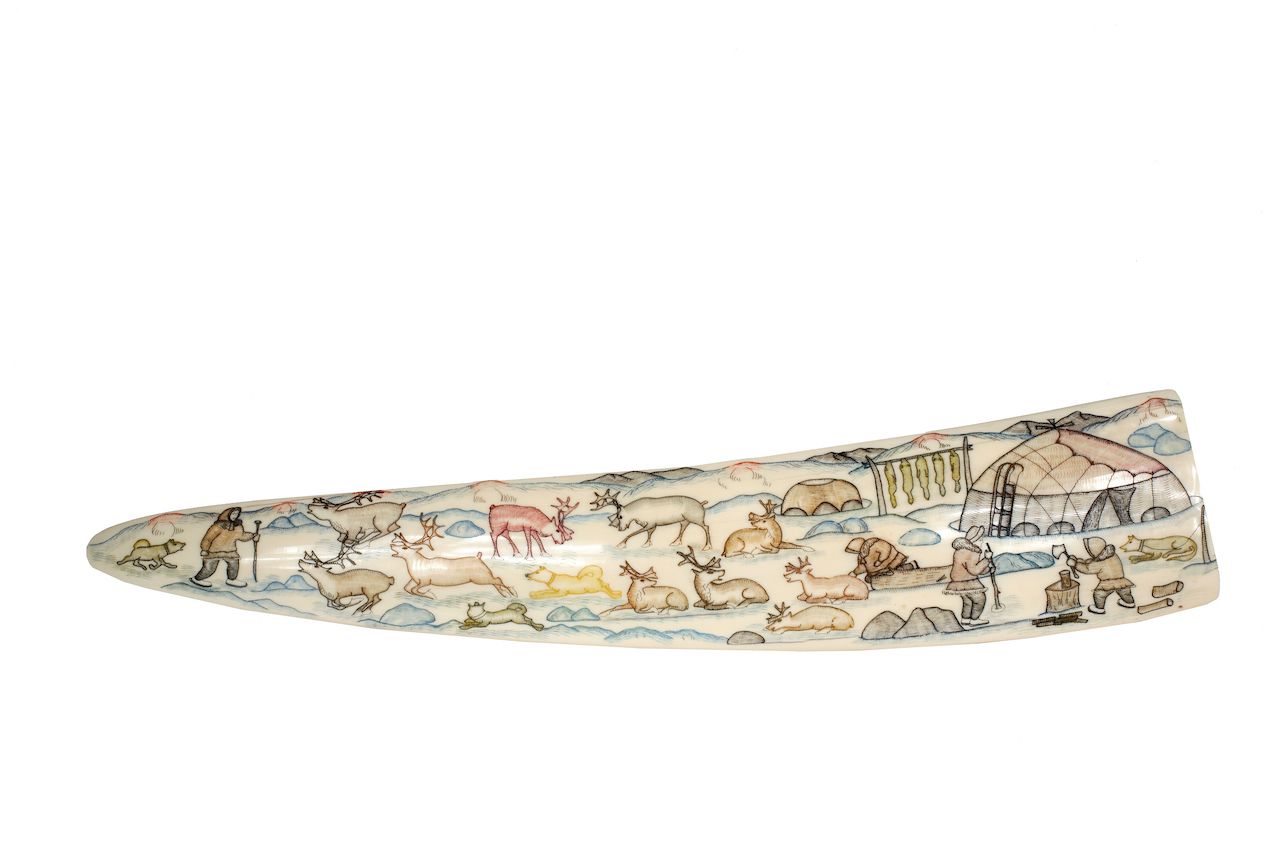 The long tusk of the walrus, a marine mammal found exclusively in the Arctic regions of the world, have been, and continue to be, a traditional medium for art by Native Americans throughout Alaska. While walrus are hunted primarily for their meat, the byproducts of the animal, especially their ivory tusks, are used in the making of art, most commonly scrimshaw etchings and carvings often depicting animals or traditional scenes. Though an almost-total ban on the commercial trade of African elephant ivory in the United States was imposed in 2016, it does not concern new marine mammal ivory, which may only be used by Alaska Natives and sold only once it’s been scrimshawed or carved.

The carvers of the small and remote village of Shishmaref on the Chukchi Sea in Alaska are the best-known carvers in the state as about every resident is an artist. If you cannot make it to the island village of Shishmaref, you can support Alaska Native Artists in Anchorage by visiting the Alaska Native Heritage Center Gift Shop, the Anchorage Museum Store, and the Oomingmak Musk Ox Co-op. Marine mammal bones, baleens, fur, and skin are also used in the making of masks, decorative dolls, baskets, jewelry, and more. 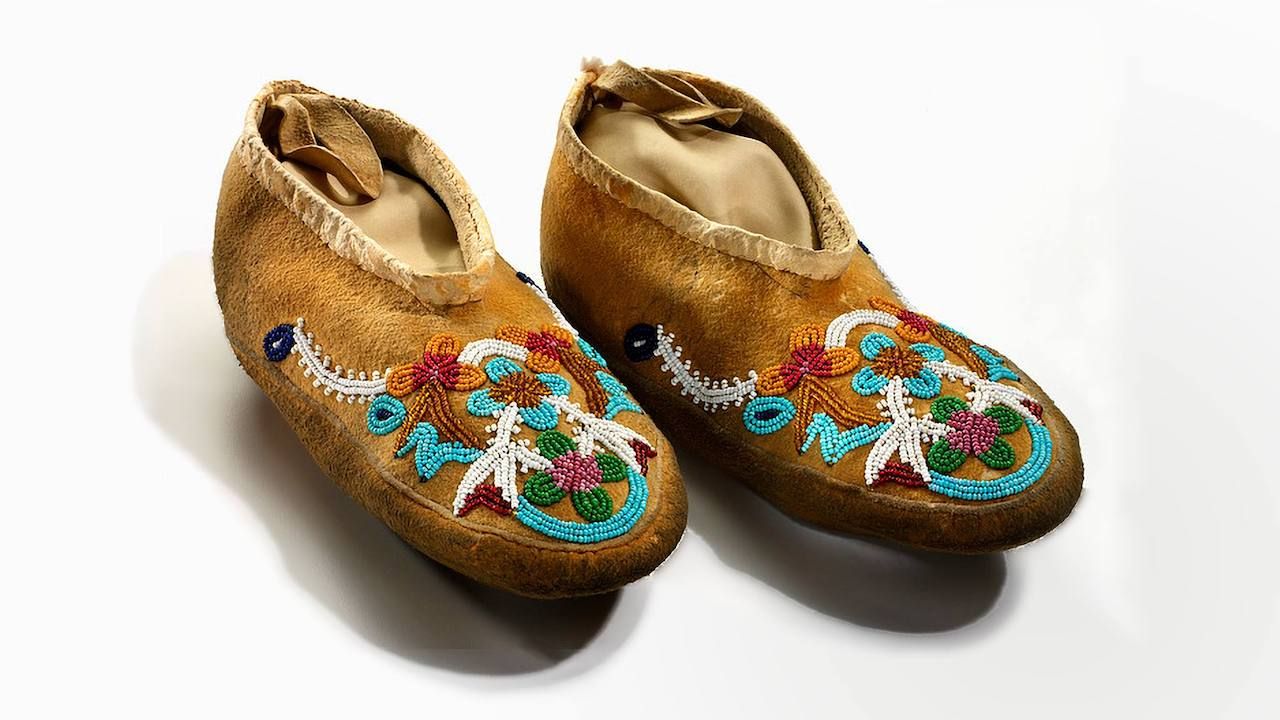 The Native American art form most widespread throughout all Tribal Nations in the United States is probably beadwork. Used for jewelry, clothing, and decorative items, beadwork has evolved from using stones, shells, porcupine quills, sinew, and bones before the arrival of Europeans in North America to using glass beads and metal tools. There exist many beading styles throughout the nation, and those who are keen to see some of them should pay a visit to the National Museum of the American Indian in Washington, DC, and explore the immense collection that spans 12,000 years and includes historical examples of the art form as well as contemporary ones. The museum gift store sells examples of authentic beadwork, as well as other forms of Native American arts and crafts. 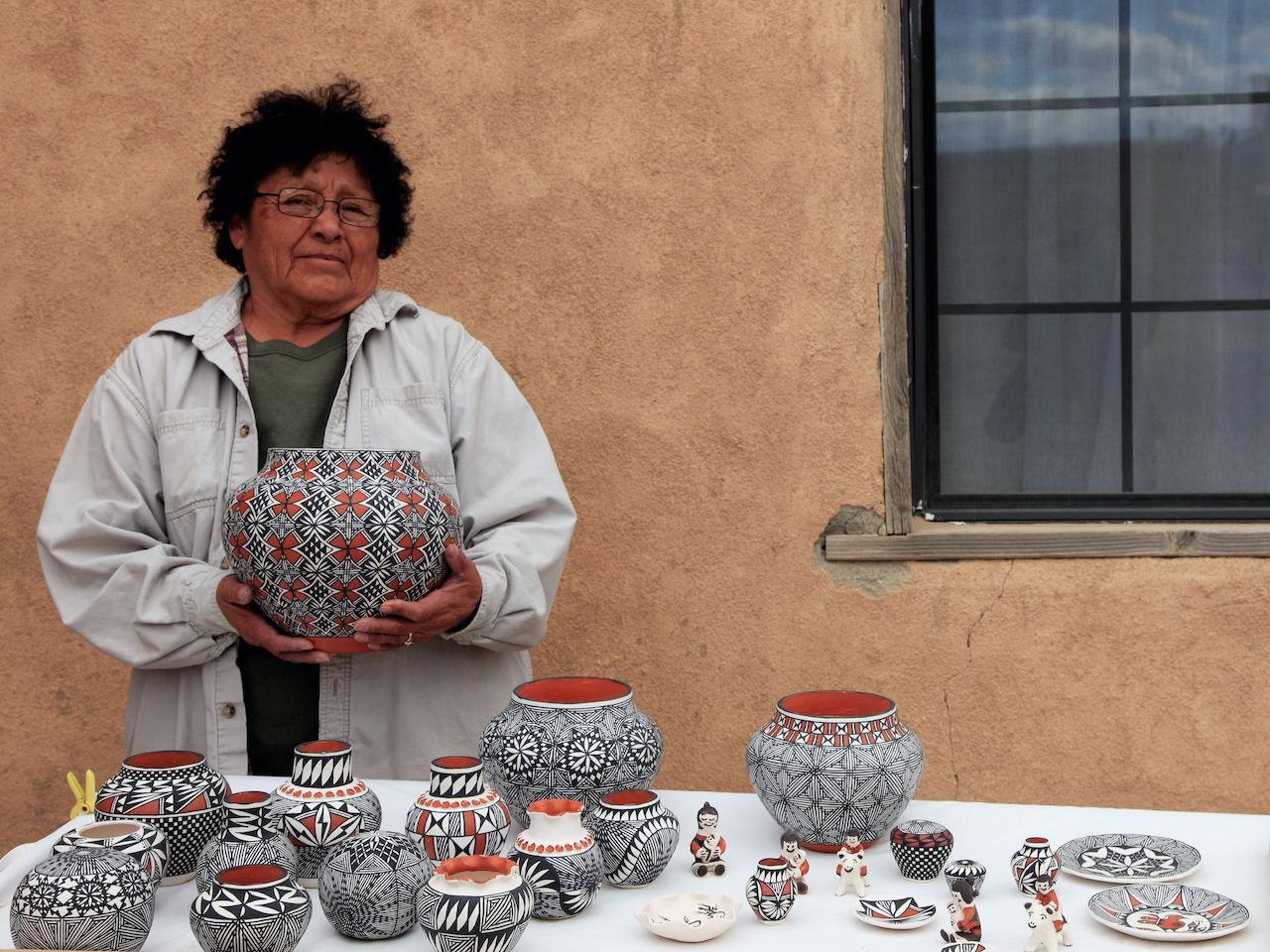 The pueblo of Acoma in New Mexico is the oldest continuously inhabited settlement in North America and is the place of origin of the famous Acoma pottery. Easily recognized by its thin walls, fine and intricate geometric patterns, and traditional black and orange colors, pieces of Acoma pottery were historically handmade with clay and fired at very hot temperatures. Today, the range of colors has expanded, and not all Acoma potters choose to construct their pieces by hand — some use molds and fire them in kilns — but the practice continues.

The patterns painted on Acoma pottery pieces are often geometrical, but it is also common to see depictions of deers, parrots, flora, and more. While nowadays Acoma pottery is an art to be admired, in the past they had practical uses as water jugs, cooking vessels, food storage containers, and even seed pots. The pueblo of Acoma has become an important tourist destination that can be toured. Visit the Sky City Cultural Center and Haak’u Museum where you can see examples of Acoma pottery and even purchase pieces made by local artisans. The cultural center has offered pottery classes in the past, so check out the calendar of upcoming events and activities. The gift store is also available online. 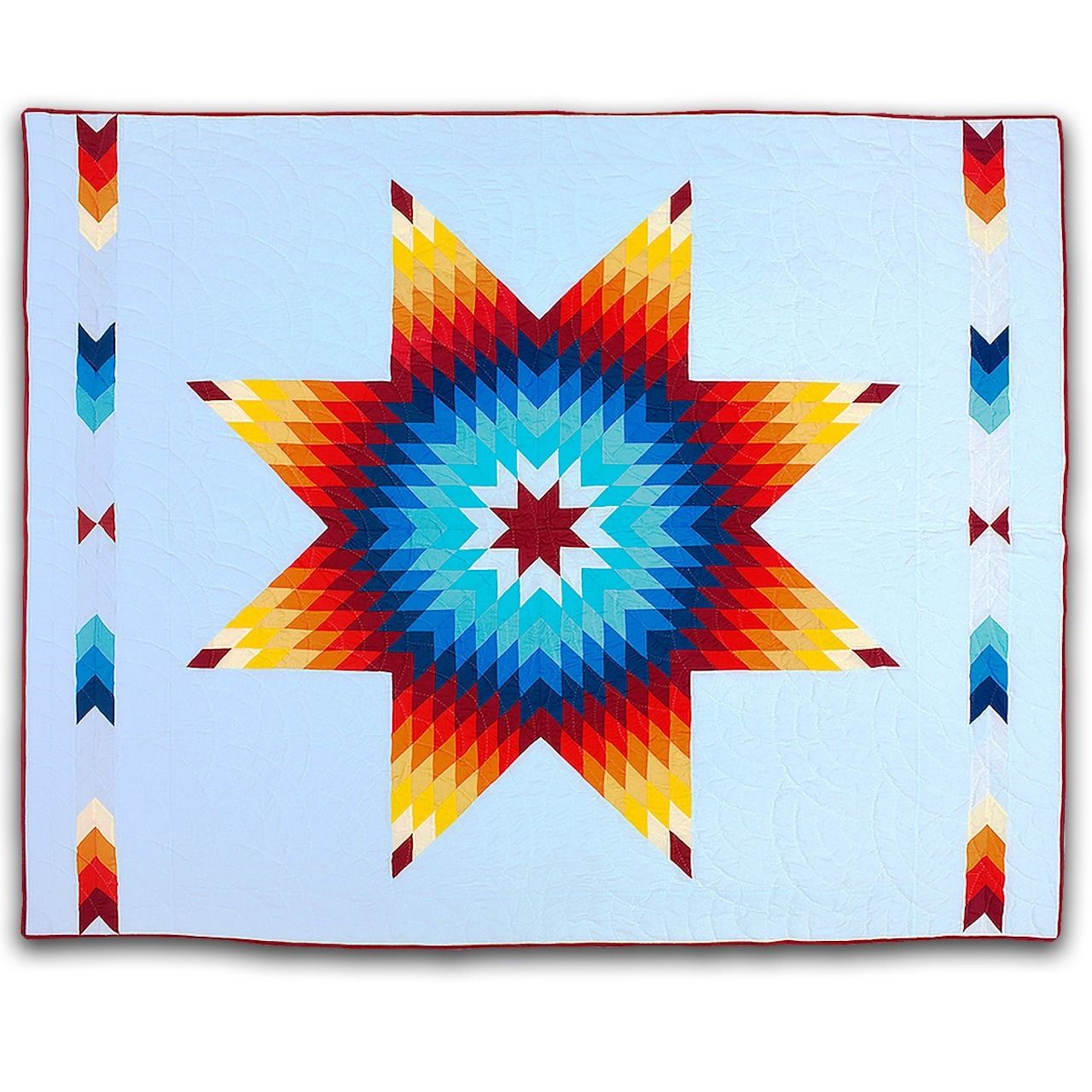 Before the hunting of buffalo to near-extinction by non-Native people in the late 19th century in an attempt to devastate the lives of Indigenous people who depended on the animals, plains nations used the hide of buffalos to create robes (among many other applications). Those robes were used in ceremonies and given as very precious gifts to convey love and respect and often featured a star pattern created in plant dyes.

When the buffalo herds almost disappeared, and the Native Americans were forced from their homes into reservations, missionaries taught Indigenous women how to sew, and from the techniques they learned, they created Morning Star quilts to replace the buffalo robes. This adaptation continues to this day, and colorful and complex Morning Star quilts are gifted to honor life events, such as births, weddings, and passings. The National Museum of the American Indian in Washington DC is home to a large collection of Native American quilts, including Eighty-eight quilts sewn by women from the Northern Plains tribes from the 1940s onwards that were acquired by the family of the collector Florence Pulford. 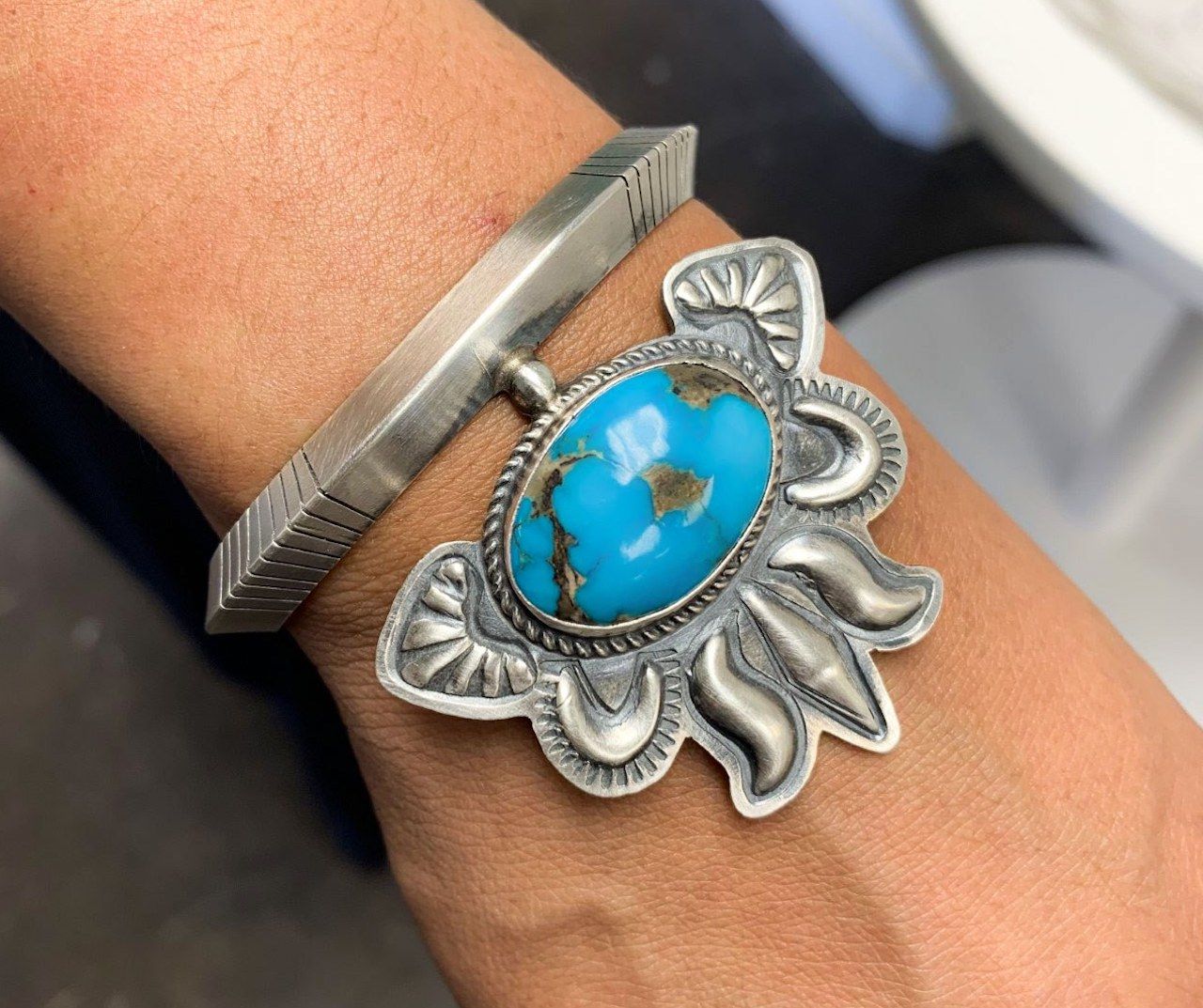 Native Americans of the Southwest (mainly the Navajo, Hopi, and Zuni peoples), where turquoise was once abundant, have been using the semi-precious stone for beads and carvings for several centuries. Turquoise was then dubbed the “fallen sky stone” and believed to have life-giving powers. But it is not before the mid-1800s when Native Americans in the regions learned the art of silversmithing from the Spanish that the turquoise jewelry as we know it today came to be. In the early 20th century, Native Americans started selling their pieces to visitors to the area, and the popularity of the beautiful pieces took off, opening the door to shameless counterfeits. Even today, there are many illegal, fake turquoise jewelry pieces on the market, often priced much lower than the real deal and taking away valuable income from Native American artists.

CultureHow Native Arctic Women Are Taking Back the Art of Inuit Tattoos
Tagged
Art + Architecture United States
What did you think of this story?
Meh
Good
Awesome