When Renee Gokey was growing up, her Shawnee grandmother cooked large, steaming pots of beans, often with potatoes or fry bread, that were hearty and simple. As Gokey got older, she saw the beans as more than just part of a dish; they were part of her history. Beans, for example, gave her grandmother strength during the Great Depression and through years of manual work at the Seneca Indian Boarding School in rural Oklahoma.

“Food is at the heart of my family life and culture,” says Gokey, a student and teacher services coordinator at the Smithsonian’s National Museum of the American Indian. “In my own Shawnee culture, we have many oral traditions about how our most sacred foods came to us, what our relationship to them is, and our value systems that surround our foods such as respect, interdependency, restraint, a focus on harmony, and reciprocity.”

In much of North America before Europeans arrived, many Indigenous peoples relied on the crops known as the Three Sisters: corn, beans, and squash. The ingredients were sustenance but also an important part of the stories central to the culture. The Three Sisters are gifts from the Creator in Iroquois legend. A Haudenosaunee story of the Three Sisters personifies the plants as teachers of interconnectedness, harvest seasons, and how the dried crops can help people survive long winters.

These stories were just as much about teaching a way of life as they were about teaching survival. Traditional gardens put the Three Sisters together in plots — a practice that’s today called intercropping or companion planting. Sturdy cornstalks support the beans as they grow, and the large leaves of squash plants help keep the soil moist. Corn needs lots of nitrogen in the soil to reach full potential, and bean roots provide that nitrogen. 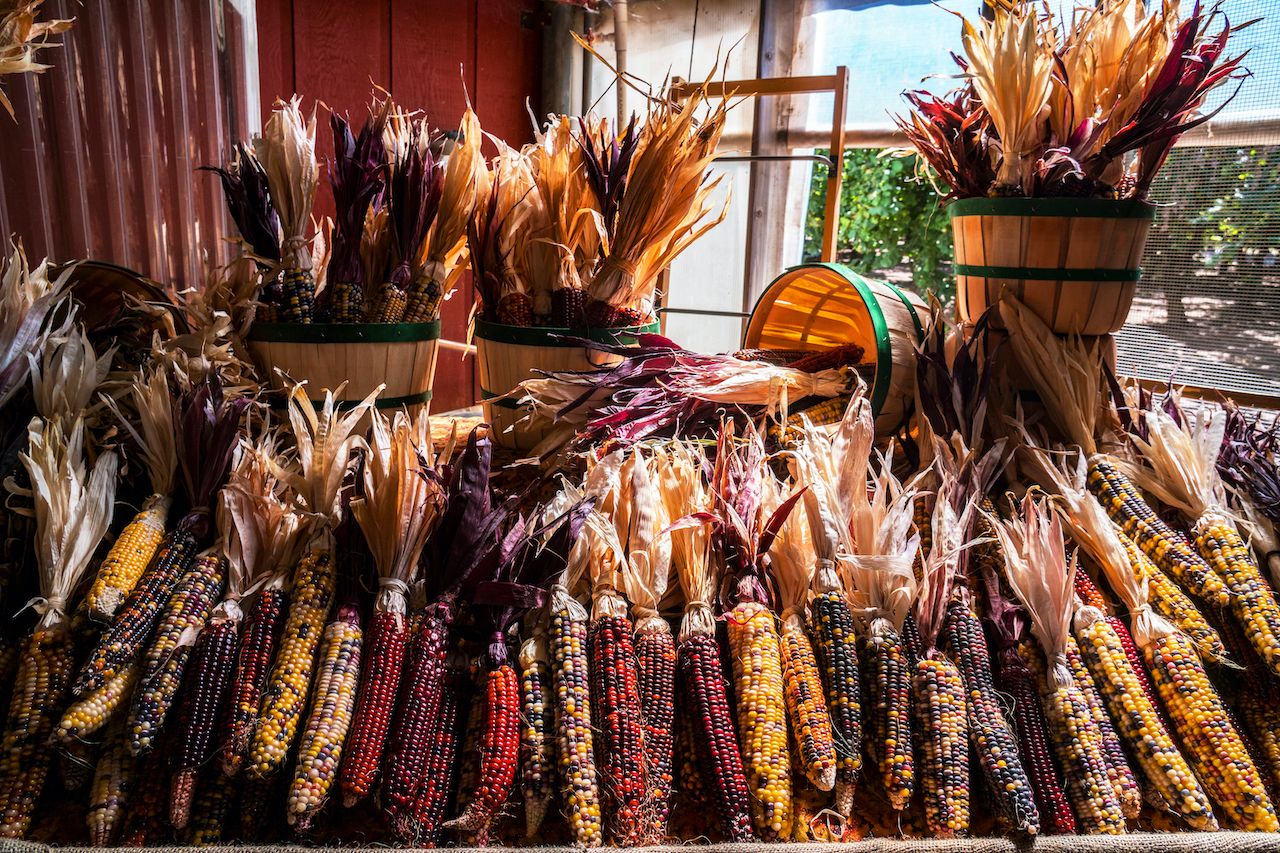 By learning these stories, an ear of corn becomes a lesson in food, culture, history, and science all in one. It’s a way to tell how lives were and continue to be lived. Each crop has its own tale depending on who is talking about it.

“We have a Shawnee pumpkin that some families still grow,” Gokey says. “We still have a pumpkin dance, and this food was cut into rings and smoked over the fire for the winter.” On one of her ribbon skirts, the Three Sisters are sewn onto the front with the small, greyish-blue Shawnee pumpkin.

“If people study food, they will learn about the incredible diversity among Nations,” Gokey says, “and that Native people developed sophisticated food systems specific to their microclimates. Native families have a great depth of knowledge of the environment and seasons, innovative agriculture, water management, seed cultivation, and even astronomy to understand the cycles of the earth, sun, and moon for when and how to plant, harvest, and preserve hundreds of Native foods.”

Food can nourish the mind and spirit as much as the body. In Shawnee culture, certain dishes are only cooked at a specific time of day or night, Gokey says. She adds that many Native peoples are taught to not argue or be angry when working with food, and that people should be in a good state of mind and good spirit when harvesting, cooking, and eating.

The United States government used access to food as a tool for control. It took land away from Indigenous peoples and provided highly processed, often canned, commodity food. In the Pacific Northwest, local governments broke centuries-old treaties with Indigenous tribes, sometimes called the Salmon People, to keep them from historic fishing grounds. The impact of these acts and others like it have repercussions to this day, as seen by the high rates of obesity and diabetes from commodity food and limited access to healthcare.

“By looking at the deeper layers of food and culture, people can learn a lot about this country’s origins, history, and how food connects to inequity today,” Gokey says. “If your identity is salmon, what happens when the salmon waters become polluted, and therefore the fish and your family have disease? [Or] when dams stop both the salmon and you from thriving? Today, tribes across this land are fighting back for control of their food systems, often on very limited pieces of land. For my family and many others, these struggles are not only for food sovereignty but for health and cultural identity.”

The relationship between traditional foods and post-colonial staples like fry bread is complex, however, but studying the interplay between a cuisine and its adherents might bring you one step closer to understanding their history.

“You can learn about the forced removal of about 33 separate tribes, including my own, through learning of the ways our people adopted new foods to blend in and try to avoid removal (it didn’t work), or, kept our food seeds, sometimes sewing them into clothing and dresses, as our tribes were forced on foot or by steamboat to new lands. One can look at the story of westward expansion and the related slaughter of buffalo by the US government in the 1800s to see the devastating effects on Northern and Southern Plains cultures through dismantling not only traditional hunting and food systems but working to destroy their homes, lives, and relationships.”

Gokey suggests a two-pronged approach to learning through food. The first is to take the time to understand ingredients and where they come from. The second is to take supportive action. Support food sovereignty led by Indigenous peoples and allies who preserve a diversity of crops through seed saving. Purchase from local farms. Grow crops where you can — this summer Gokey grew Cherokee popcorn with a lineage that dates back to at least the 1700s — and consider rematriating (Indigenous women served as seedkeepers in many tribal communities) Native seeds to Native people, Gokey says.

“By growing a food yourself, exploring changes in a family recipe, looking at cultural innovation and creativity, and even how hardships in life can change a dish, we grow an appreciation and more respect for our food and our ancestors,” Gokey says. “That respect flows both ways and around us. Native cultures, in general, have relational ways of knowing, rather than reductionist. I think being able to make connections between history, food, and diversity of cultures shows how interrelated we all are and that it’s hard to separate them.”