Procida, Italy is an idyllic island fringed with black sand beaches and candy hued architecture just off the coast of Naples (in Campania, Southern Italy). It has managed to remain largely hidden from the usual Naples tourist route, but after winning Italy’s much-coveted Capital of Culture status (the first island to be awarded such a distinction), now is the perfect time to explore this slice of rough-around-the-edges Neapolitan island culture.

Wash ashore from a ferry from Naples or Ischia and it’s likely that those glittering waters that nip at the volcanic black sand beaches, or the daily catch from local fishermen that piles up in boxes and nets across the marinas, will make you fall head-over-heels in love with Procida, Italy. Venture on a slow walk into Procida’s chaotic and often unkempt interiors, and you’ll soon realize that this pretty little island, with its winding roads, has so much more to offer than seafood – although that’s good, too, of course.

What is Procida, Italy, known for? 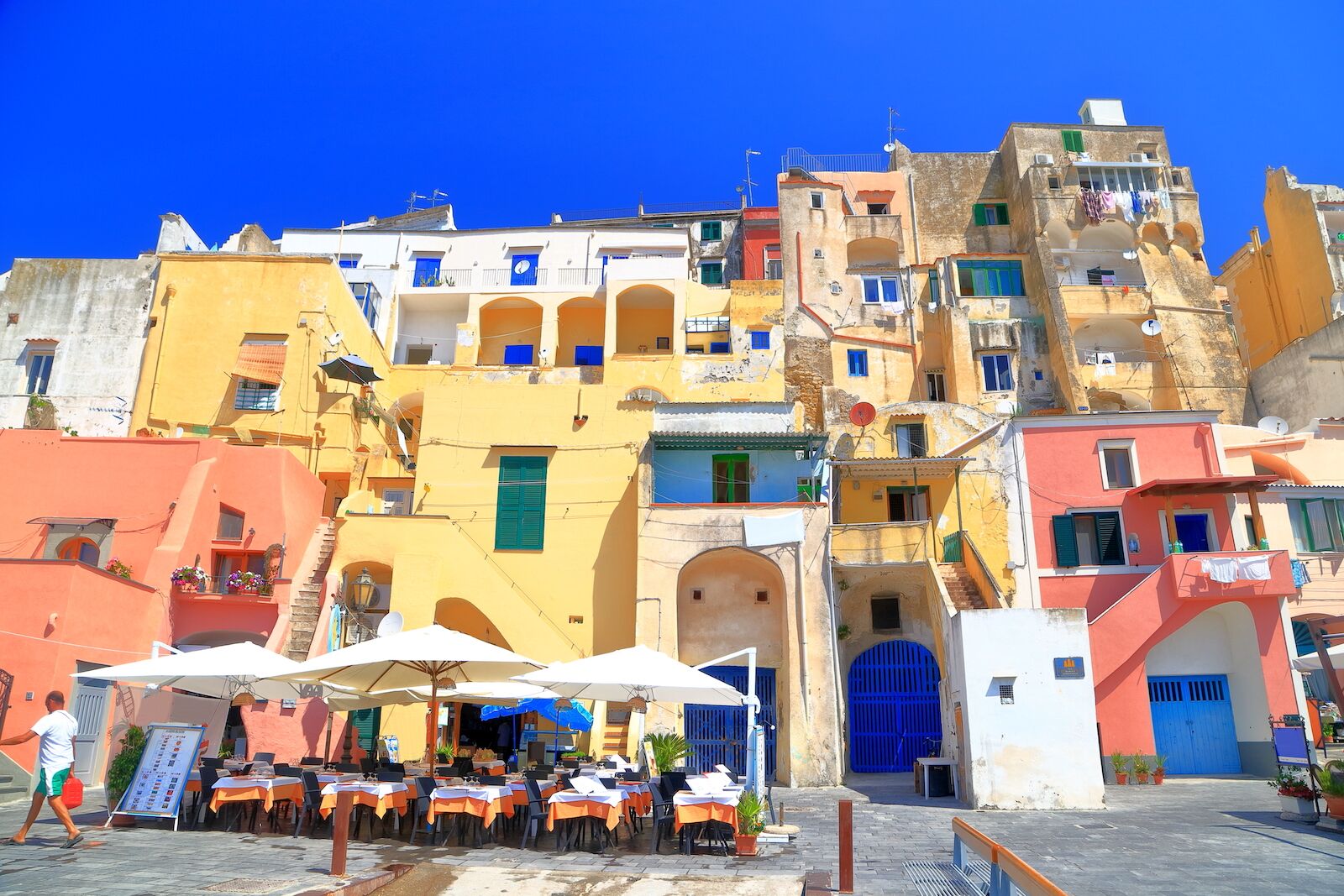 Procida’s cobbled, candy-floss-colored marinas can easily rival its neighbors, but where Ischia and Capri are all glitz and €15 spritzes, in Procida you’ll see more fishing nets and crumbling walls, with a hardened Neapolitan charm that has barely changed in a century (although you can get a spritz for a fiver here, too). 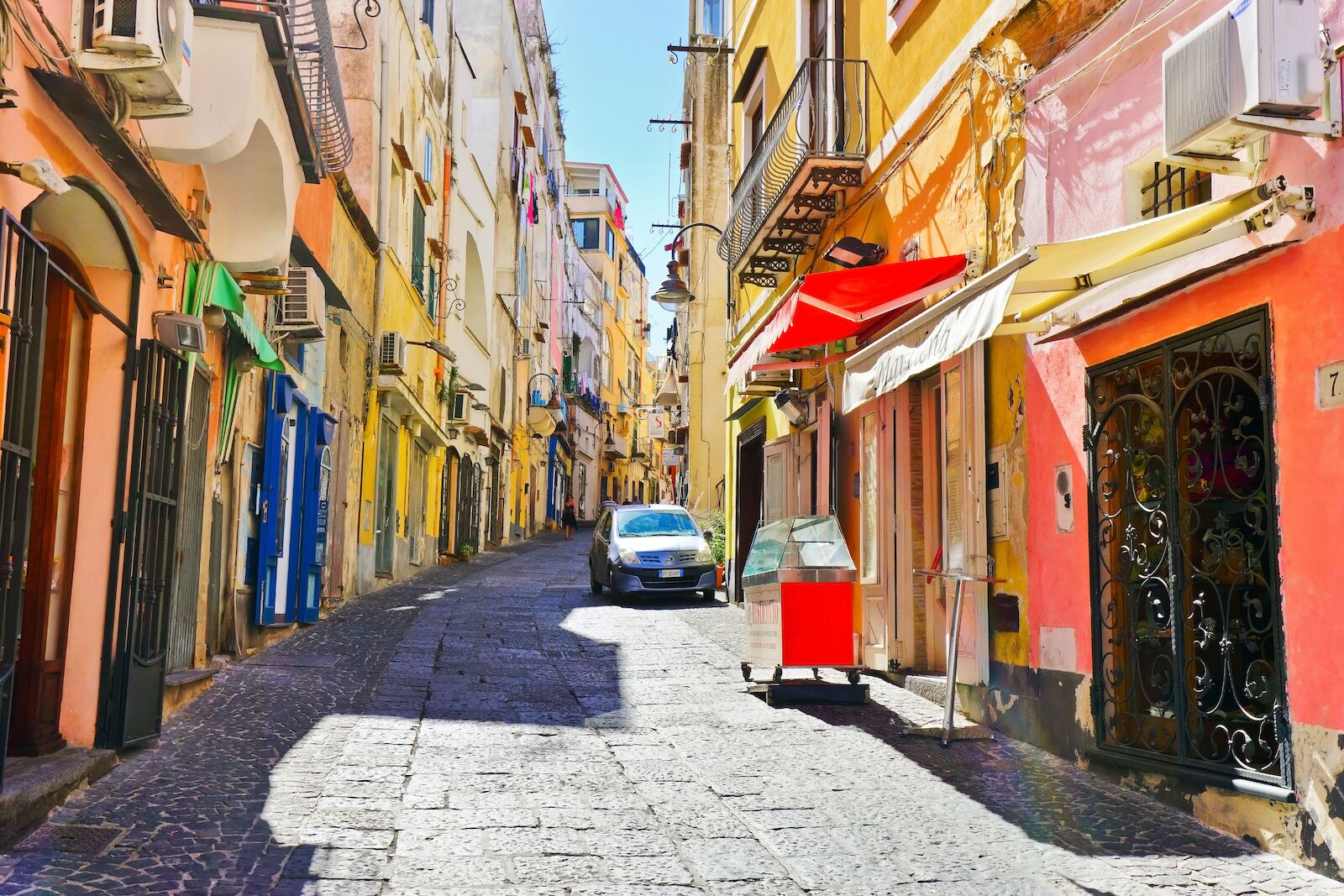 Look up from most of the island and you’ll see a vast fortress on a hilltop, until recent years an infamous prison for Italy’s worst criminals. It hangs like some medieval shadow over the colorful houses of Marina di Corricella, where old cars and mopeds crowd the sidewalks punctuated by a forest of lemon trees, their roots breaking through the tarmac on narrow roads.

What are Procida lemons? 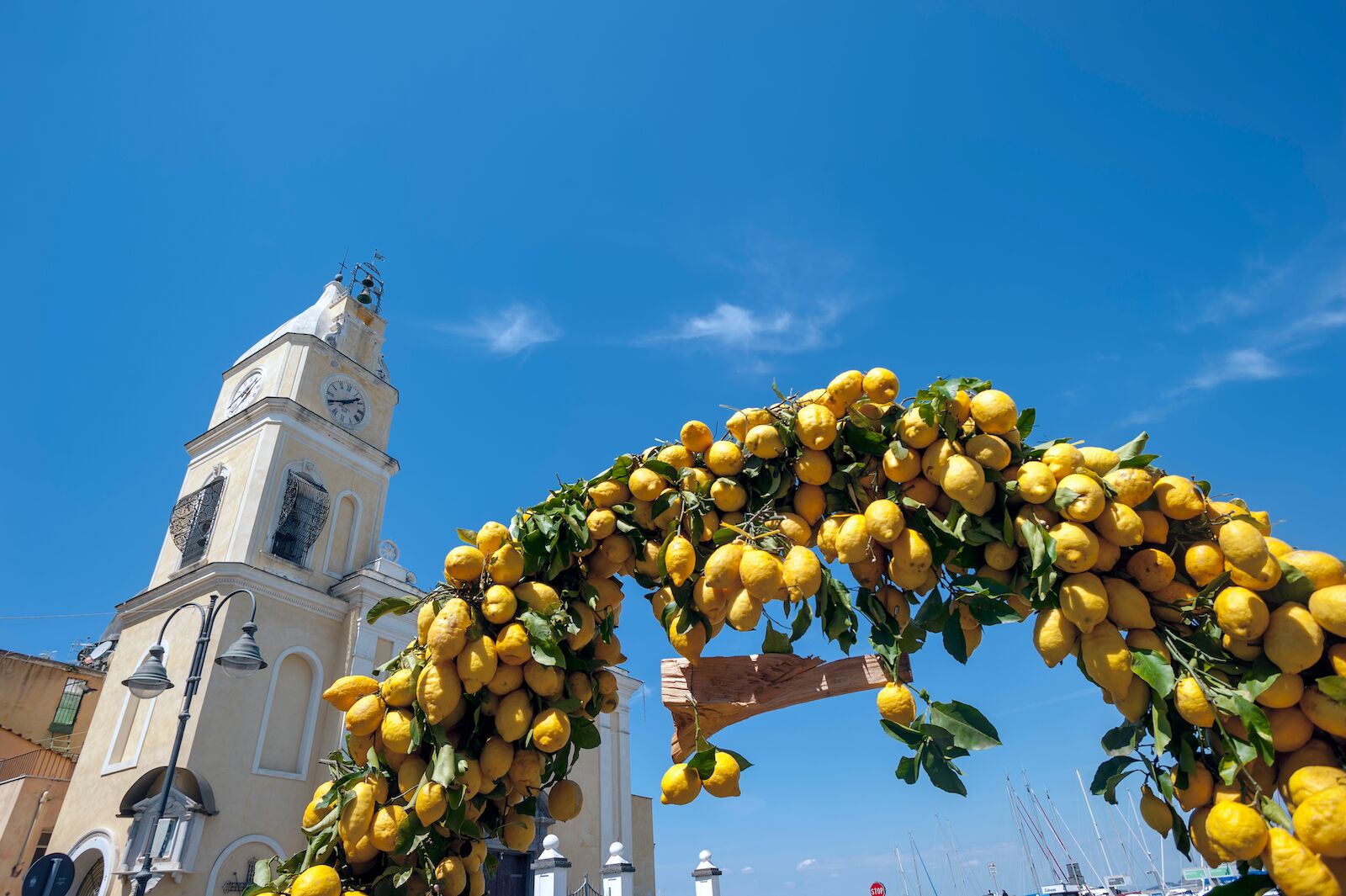 Treasured for its white pith, the fluffy underside of the rind, that locals refer to as the bread of the lemon, the Procida lemon is unlike any other. First of all, it’s huge. Some are as much as four times the size of a regular lemon, with porous skin and a lumpy exterior. Lemons are chopped into big chunks for deliciously sweet lemon salads, shredded up for pasta dishes and distilled into Limoncello di Procida.

Walk the streets of the Procida, Italy, and you’ll find lemon trees arching over roads, beds of lemons beneath thickets of bushes, bowls of lemons perched beside lemon-scented pasta dishes in waterside restaurants, and pretty houses made all the prettier by a lemon fresco or a house number marked by a tile decorated in hand-painted lemons. The Procida lemon colors this little island as much as it flavors and scents it.

How do I spend a day in Procida? 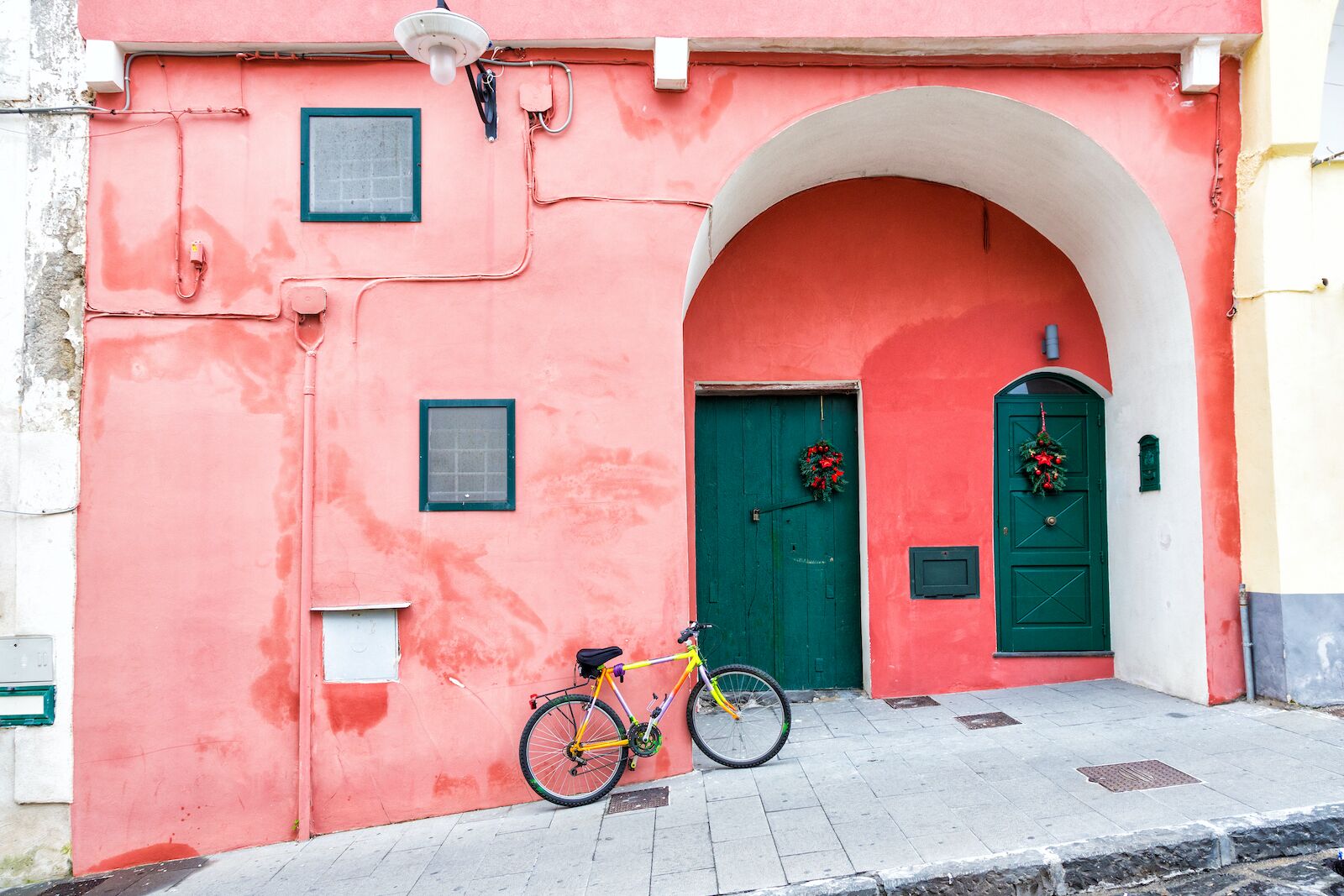 Procida, Italy can be visited in a day, but take it slowly and get to know it, walking from the busy Marina Grande to the vistas atop Terra Murata and stay in a hotel with a view of Marina di Corricella – try to find one that serves freshly baked pastries in the morning (I recommend hotel La Casa Sul Mare). 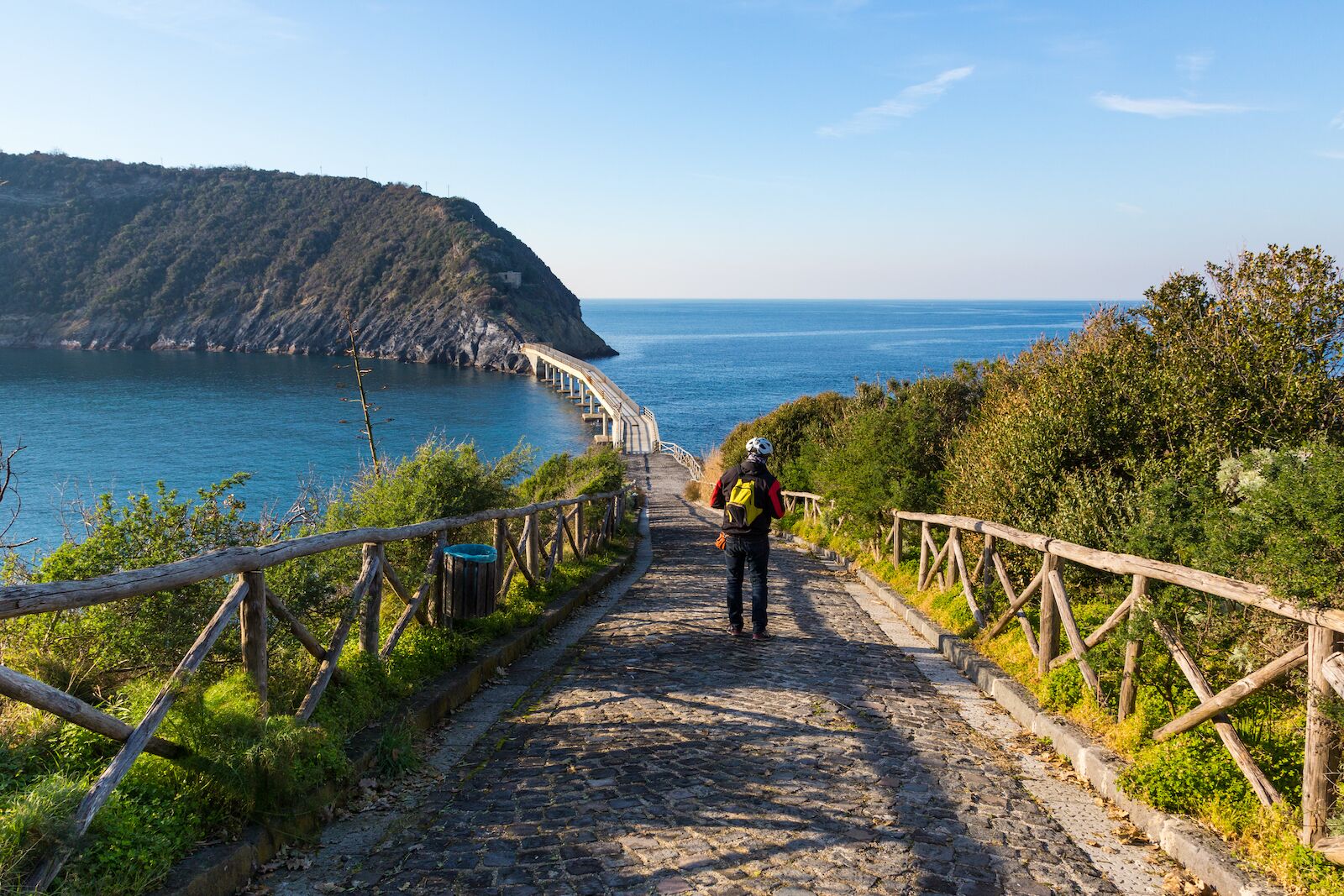 Hike the length of the island (a trek that can be completed in less than half a day) to find the island’s interior lemon groves and hop over the bridge that connects to the nature reserve at Vivara Island. Stop for slices of Neapolitan pizza en route to black sand beaches where local limoncello spikes the spritzes and take the time to try each of these delicious island delicacies.

What to eat in Procida, Italy 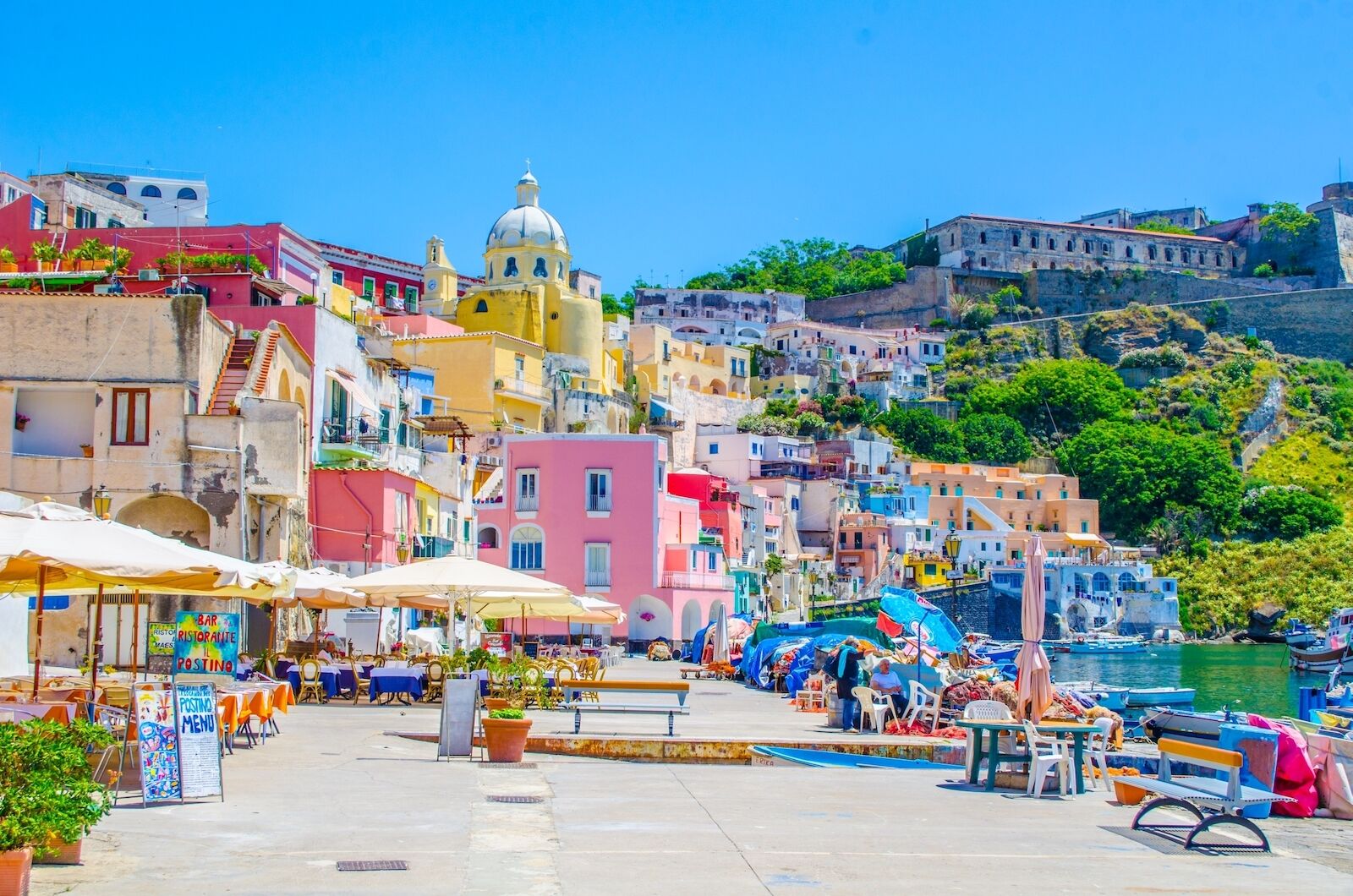 Hop off the ferry at Marina Grande (the only way to reach the island), avoiding the mopeds that form a disorderly crowd around the ferry docks, and grab a seat at a rustic outside table at Bar Roma – the place where this lemon cream-filled pastry was supposedly invented. It first popped up sometime in the 1960s, and its name means the Tongue of Procida. A golden-hued, extra crunchy puff pastry in the shape of a fat tongue, flaky and rough around the edges, with fluffy layers leading to a melting creamy lemony cream within. It pairs sublimely with a coffee for a perfectly Procidan breakfast, or alongside a spritz for an indulgent mid-day aperitivo.

Variations pop up here and there (try Panificio F.lli Dell’Amura or Pasticceria Spinelli) with custard and chocolate amongst the most popular, but Bar Roma’s original take is as good as any place to start a tour around the island, and they’ve served up their version for more than half a century.

On Procida, plates piled with sliced lemons are a common sight. The unusually robust white pith is so thick that locals call it bread of the lemon, and the first bite is sweet, fresh, and juicy. The salad is further spiced by fresh onion and chillies, then seasoned with fresh mint and salt.The dish is often served on a small plate, and sometimes with a plateful of freshly fried anchovies, but it’s at its best when the chef is liberal with the chillies and sprinkles on a handful of freshly picked mint, as in the version at Il Pescatore.

Seafood from the marina 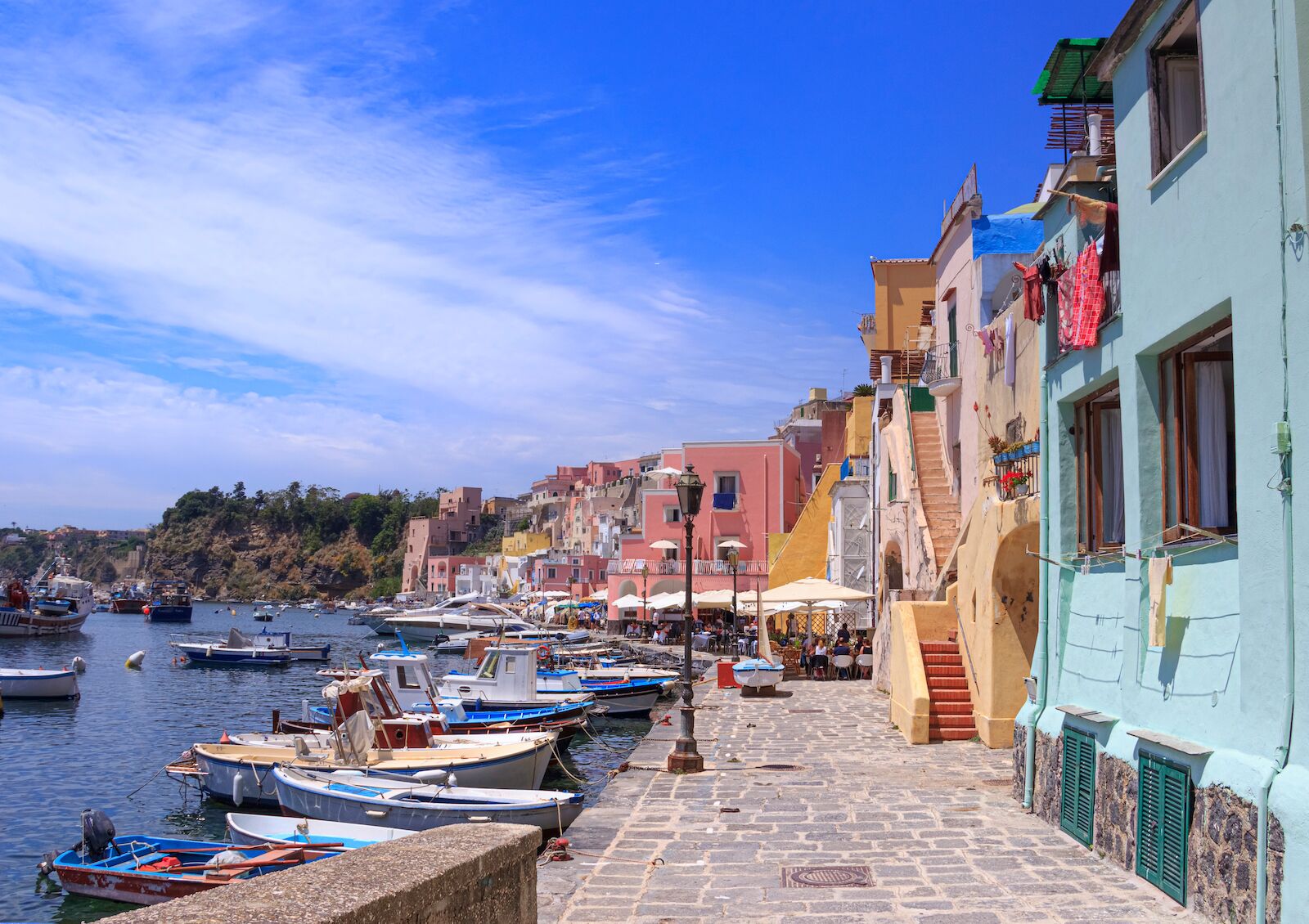 Stroll along the waterfront beneath the gelato-colored houses at Marina di Corricella and the choice of fresh seafood is abundant. Every restaurant boasts freshly caught fish and offers them up for selection from a silver plate. Stray cats weave in and out of empty fishing nets, eager to sample from the bowls of freshly topped up water. This little cinematic scene happens daily.

While it’s fair to say that the restaurants in Marina di Corricella have similar menus, serving up the local seafood and shaving parmesan and lemons onto crisp white plates, the marina remains a perfect spot for lunch and dinner. La Graziella serves up some of the better pasta, with spaghetti served with fried anchovies and lemon juice, or thick chunks of lemon and handfuls of mint, while Ristorante Gorgonia’s sea urchin pasta is a divine, salty hit of pure oceanic flavor.

If you’re traveling to Procida, Italy, in the high season it’s advisable to book, as space is limited, but La Lampara’s creamy seafood risotto is more than worth the effort. Pair it with an inexpensive but generally very good house wine poured from a carafe, all while gazing at views of the bay and the ornate duomo of Santuario S. Maria Delle Grazie Incoronata poking up from the skyline like a big lemon-colored wedding cake. 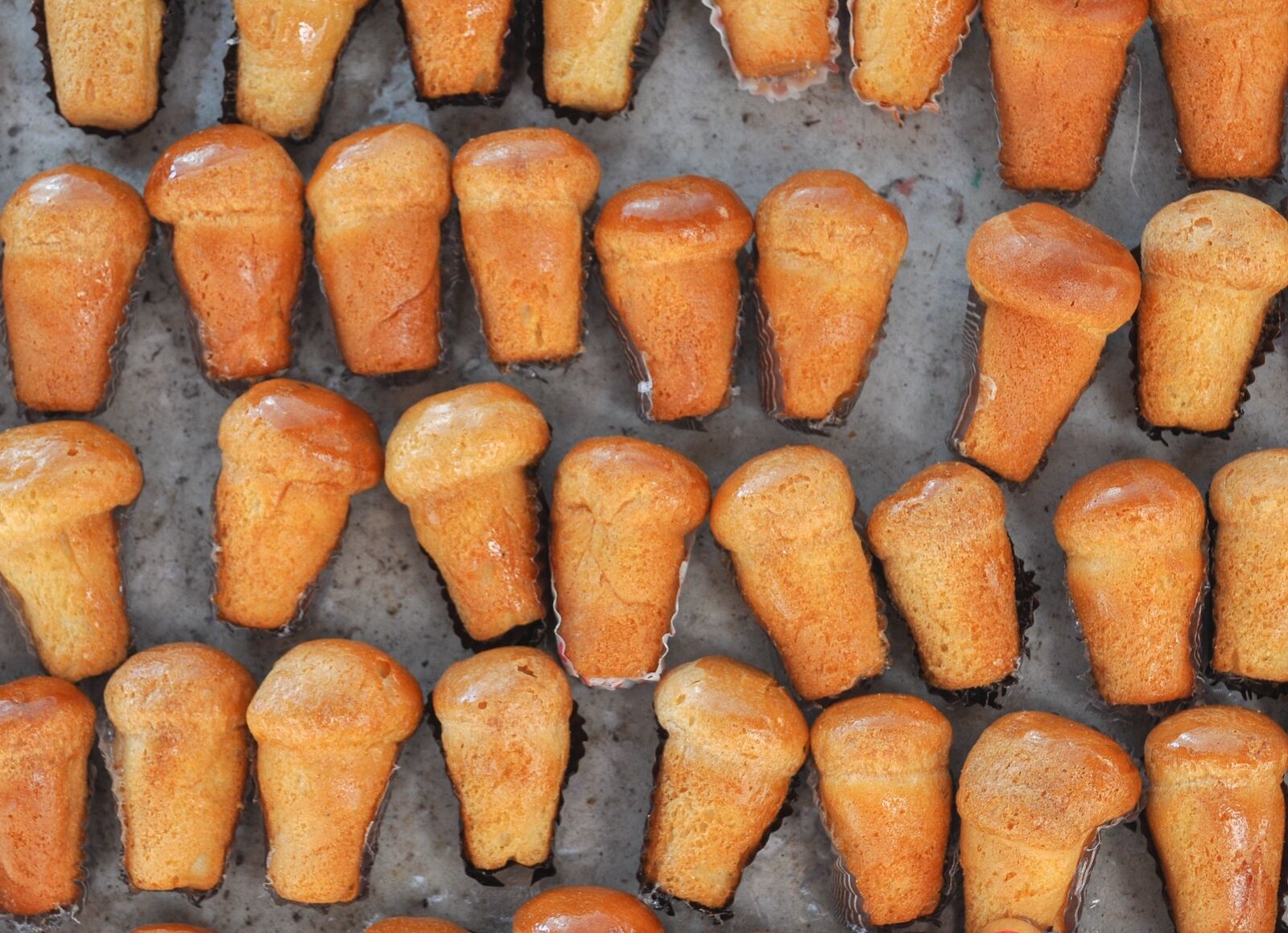 Babà, conical cakes soaked in sticky, citrus-flavored alcoholic syrup, are a staple on the Neapolitan food scene, but their roots grew from the east, where, in Poland, former king Stanislas Leszczynski had the idea of soaking a dried-out kugelhopf cake in liqueur.

The idea traveled and eventually hit Paris where it became babà au rum before being taken to Italy by the monsù – chefs who had trained in France and worked in the kitchens of the well-to-do families of southern Italy, ensuring babà would become as Neapolitan as pizza. In Procida, these delight cakes are often served soaked in the local limoncello.

They pop up across menus but the sweet, browned cones of babà served up on the terrace at Ristorante Gorgonia are often topped with cream for an extra hit of indulgence. A lemony, burned sugar flavor gives way to a strong hit of alcohol and the sticky sponge melts in the mouth, perfect for an after-dinner treat.

People with a taste for heavy meat dishes aren’t particularly well served on Procida. However, one red meat dish that you’ll find on the island is a hearty, heavily spiced rabbit stew. Procida’s stew is a slow, laborious affair; the cooking time goes on for several hours until the rabbit is tender and proficiently soaked in the flavors of local rosemary, a touch of garlic, cherry tomatoes, chillies and white wine.

La Pergola’s rabbit stew is legendary, and served, as seems correct for such earthy, autumnal fare, under the lemon vines of its romantic terrace amongst the island’s leafy interiors.

Everyone on Procida has a lemon tree close to hand, that much we’ve established. It’s also true that the sea is never more than a 10-minute walk away from where you are on the island.

This simple pasta dish of anchovies and peppers is emblematic of the fishermen who populate the island: In fact, the name loosely translates to poor fisherman’s spaghetti. On Procida the enlivening flavors of anchovies and green pepper give this dish a tang of both the sea and the land.

The dish comes together quickly with everything fried in olive oil and piled up atop a fresh hill of al dente spaghetti in the middle of the plate,  topped with grated cheese (while not “traditional”, it is a mouth-watering accompaniment).

La Conchiglia serves its version in the traditional fashion from a delightful space overlooking the vistas at Spiaggia della Chiaia. The restaurant is accessible from the beach but is one of many restaurants that remain closed for the colder seasons, so check for opening times before descending the (hundreds) of twisting stairs to the sand. 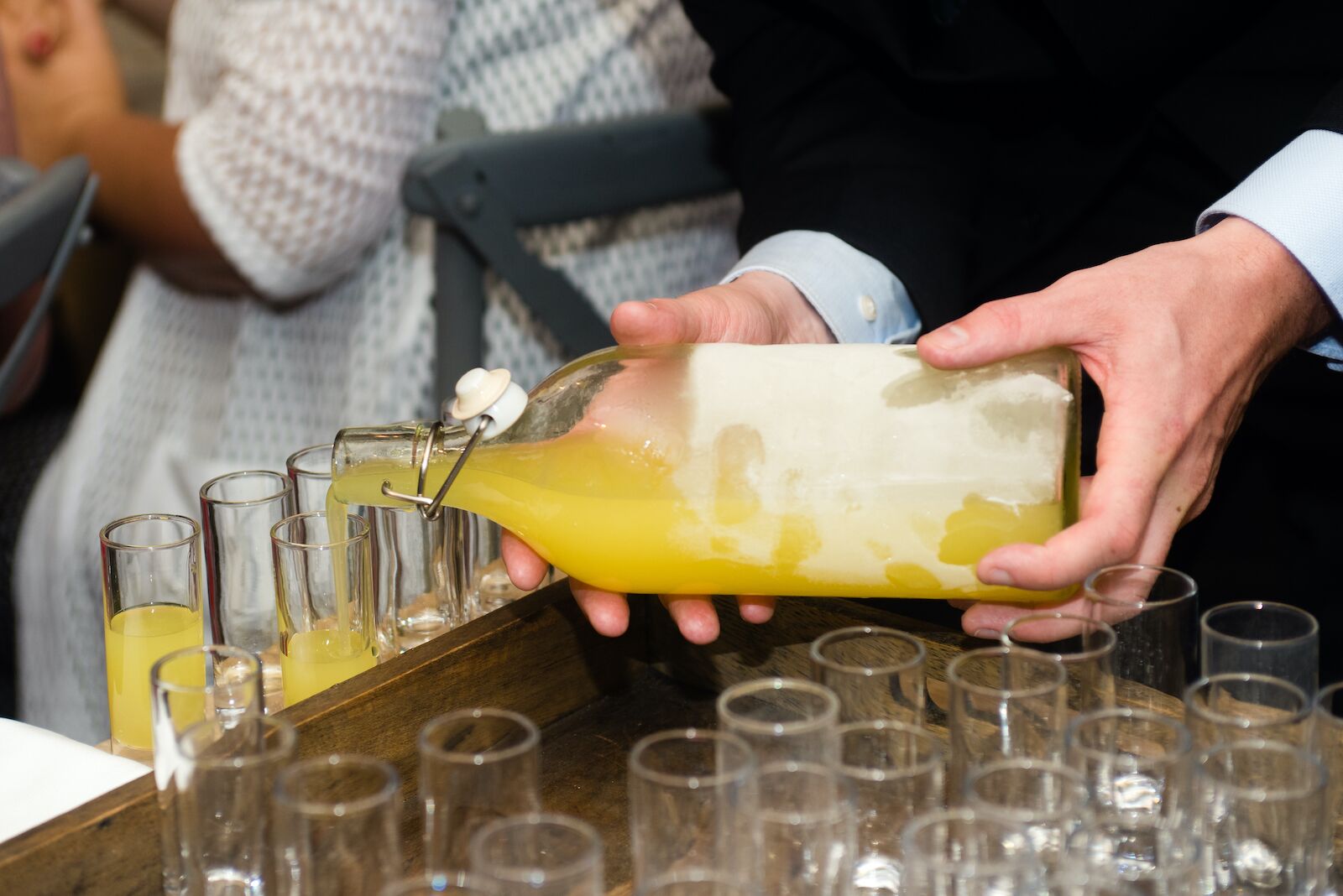 Traditionally, while making Limoncello di Procida, the island’s native version of limoncello, producers would drop in a few lemon leaves along with the lemon peel for a subtle Procidan twist, but David and Cinzia Lubrano, the creators of Foglioli decided to drop the lemon entirely and make a drink inspired by limoncello using only the leaves of the local lemons. The results are more herbaceous than a limoncello, with less sugar, and a puckering bitterness on the palette. On my last visit to the island, David told me that breaking open a lemon leaf and smelling the “truly amazing” aroma is exactly how he got the idea for Foglioli.

In order to get a taste, order a spritz al Foglioli at Capriccio Bar on Via Roma or try the Flamingo Bar on Piazza Della Repubblica, where the cocktail menu often showcases the spirit.

Beaches and IslandsThe 6 Best Beaches in Italy To Vacation Like a Local
Tagged
Food + Drink Travel
What did you think of this story?
Meh
Good
Awesome