Las Vegas is not renowned for being family-friendly. After all, it’s home to an unreasonable number of sexy adult shows, extravagant hotels with 40-foot-tall TV screens, and museums dedicated to dubious themes, like the mob and burlesque shows. Yet, come fall, Las Vegas, just like everywhere in America, makes a big deal of pumpkin patches so that everyone, from families to couples to groups of friends can go in search of the perfect gourd and some non-sexual, non-boozy, non-gambling festive fun.

So for one day, trade the casinos, glamorous pools, and Michelin-star restaurants for hayrides, corn mazes, and rows after rows of pumpkins at one of the following fall festivals and pumpkin patches in Las Vegas.

The Gilcrease Orchard is a Las Vegas landmark where families come to pick and purchase fruits, vegetables, and during the fall, pumpkins.

The concept is simple: drive up, walk out to the fields, pick whatever you want, and pay before you leave. Peaches, pears, cucumbers, zucchini, summer squash, and more are available for those who want that true farm-to-table food experience. The orchard has even developed an app that allows you to see exactly where everything is, so you don’t spend hours roaming the 60-acre farm unless you want to.

During the fall season, Gilcrease Orchard sets up a family pumpkin patch where you can fill wagons and wheelbarrows with an assortment of pumpkins and seasonal offerings, ready for checkout.

It’s an extremely popular place on the weekends, so you’ll want to get there early for first dibs on the goods, plus your crew will want to stand in line for a cup of their legendary apple cider and mouth-watering donuts.

Season: Gilcrease Orchard is open throughout the year. Their fall season generally begins at the end of September and runs through October. 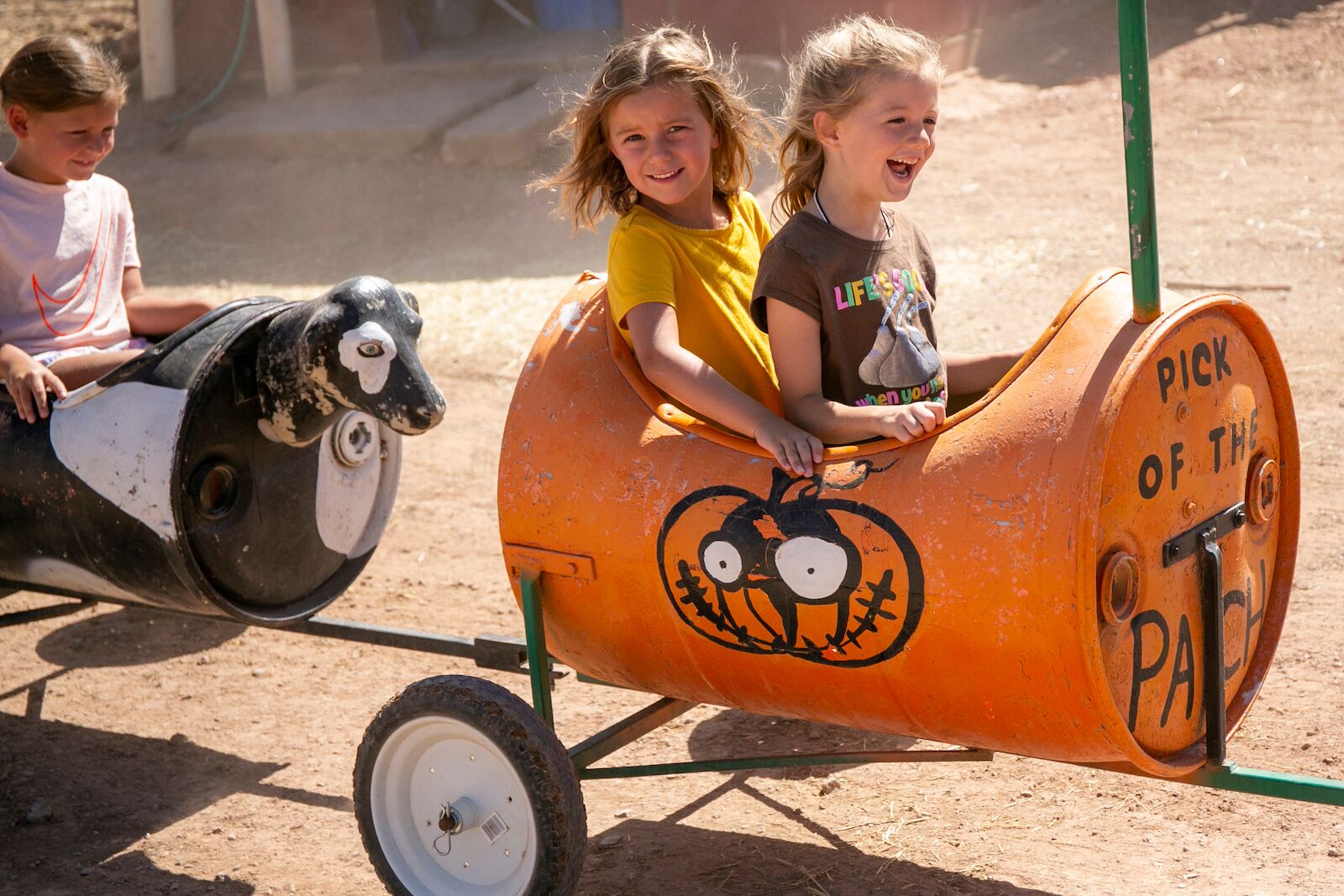 We’ll get the obvious out of the way first: Staheli Family Farm is not in the Las Vegas area. It’s a two-hour drive from downtown Vegas to this property in Utah, but every year Las Vegas locals make the trek to this unique family experience and agricultural wonder.

The Staheli Family Farm’s Corn Maize brings visitors back year after year. Guests navigate their way through an intricate maze where elaborate designs have been cut into corn fields. Past maze designs have included a salute to our nation’s veterans, a thank you to Utah farmers, and a celebration of Zion National Park.

The most popular attraction is their Field of Screams, which is a completely separate Halloween-themed cornfield maze with jumps and frights around every corner.

Other attractions include a cow train and a trick-or-treat trail for the younger ones in your group, as well as a petting zoo with goats, sheep, pigs, and more.

No trip to Staheli’s fall festivities would be complete without a visit to their pumpkin patch, where guests have their pick from an entire field of pumpkins to take home. Families also have every opportunity to take plenty of classic seasonal fall pictures while visiting the pumpkin patch.

Hours of operation: The farm opens at 5 PM each day, Monday through Saturday, but remains closed each Sunday.

Each fall, families from every corner of Southern Nevada descend on the small, unassuming town of Moapa Valley to get lost in a haunted maze of corn, take holiday photos in a pumpkin patch, and enjoy a few rounds of zombie paintball.

The Moapa Valley Cornmaze pumpkin patch is more than just a few pumpkins set up on hay bales, it’s four acres of pick-your-own fun where guests can choose between fresh pumpkins, delicious watermelons, and ears of sweet corn.

In addition to the pumpkin patch, an impressive directory of activities will keep everyone in your group entertained for the day. Try your hand at the corn cannon, where compressed air will help you launch corn over 300 feet down range, or the pedal carts, which allow riders to scoot around a track as fast as their legs will take them.

Food is also available for purchase at the Moapa Valley Cornmaze, including caramel apple slices, hamburgers, and hotdogs, among other selections. The must-try, however, is the mouth-watering concoction called “Apple Pie Fries,” which are apple slices dipped in a sweet batter that are fried and sprinkled with cinnamon and sugar before being topped with whipped cream and warm caramel.

Admission to the Moapa Valley Cornmaze is $12 and some of the activities, such as zombie paintball, require an additional fee.

Season: End of September until October 31.

Grab a big bag of carrots and get ready to feed the horses, donkeys, chickens, and goats at the McKee Ranch Foundation located off Dean Martin Drive on the south side of the city. Visitors to Las Vegas may not realize that Las Vegas was once a thriving ranching community before it became entertainment and tourism-based. The McKee Ranch Foundation’s main goal is the promotion and preservation of ranch culture in southern Nevada.

In October, McKee Ranch Foundation invites the community to their pumpkin patch for pictures and fun, which in the past has included a small corn maze, straw maze, and slides for young children. The ranch has also set up a barrel train, face painting, plus other art offerings so families can plan on spending an entire evening at McKee Ranch. Admission is $20 per family and includes a pumpkin that you can take home. 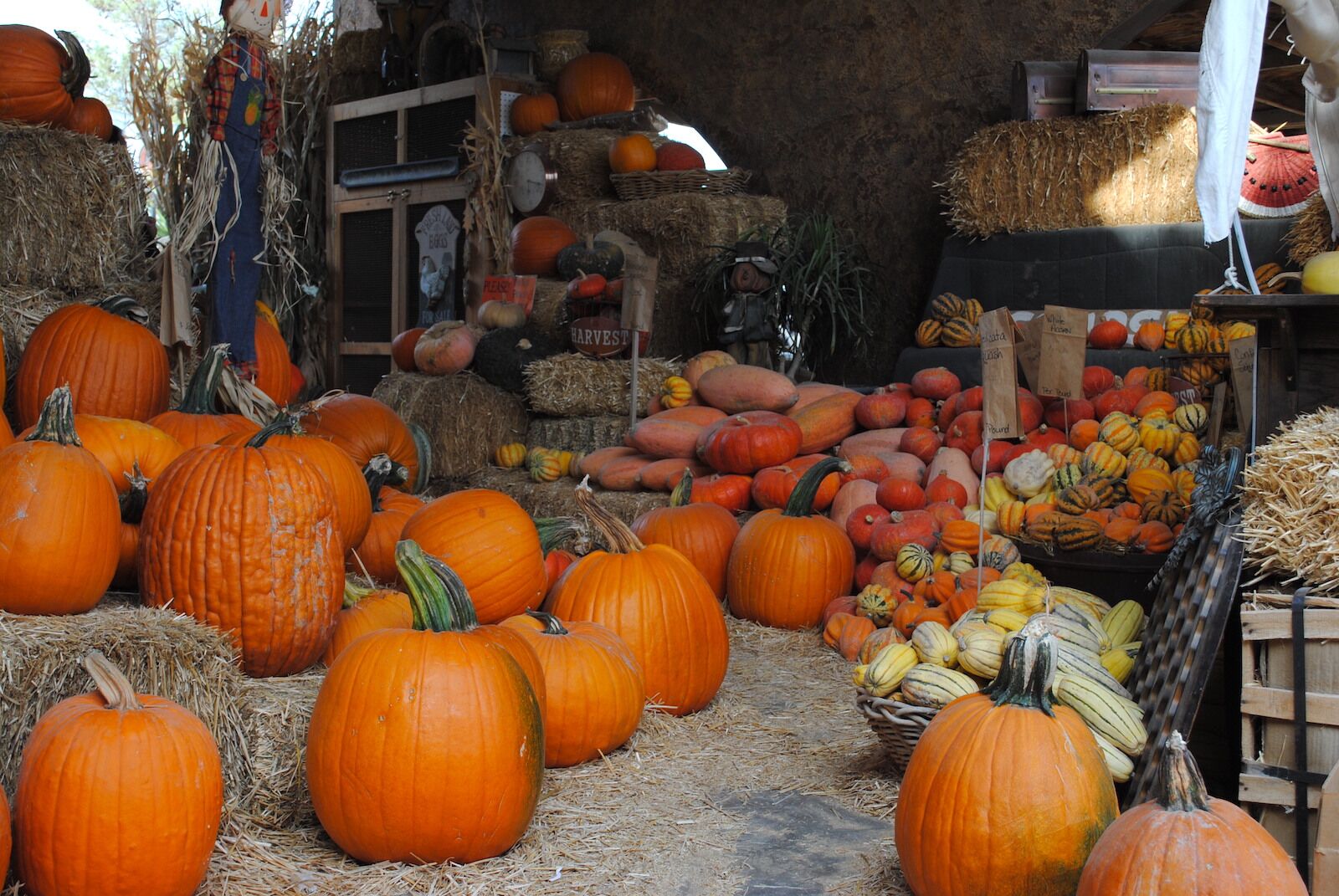 The Las Vegas Farm, also known as Barn Buddies Rescue, is a cherished landmark that has been active since the 1960s and allows guests to feed and interact with chickens, ducks, peacocks, geese, turkeys, goats, pigs, horses, and a llama, among a variety of other animals.

At the heart of the Las Vegas Farm is a desire and movement to provide housing, rehabilitation, and holistic care for abused or neglected farm animals. So while you feed the animals and shop the farm’s goods, visitors can feel a sense of pride knowing that the profits are put back into the care for the animals they have on the property and the ones that will arrive in the future.

During October, the Las Vegas Farm hosts a Farm Fall Harvest Festival where guests are invited to bring the entire family to enjoy activities such as a cow train for toddlers, an amazing maize maze for all ages, a concession stand that serves up yummy treats, and more. A number of goods are also made available for purchase at the market, such as specialty pumpkins and squash, artisanal bread, cheesecakes, pies, jams, fresh local honey, and eggs.

Admission is free for the market portion only. To get up close to the animals, you’ll pay $8 for those 13 and older, while children 12 and under will pay $4. The special activities range from $1 to $4. All income from the festival goes towards veterinarian care and feed for the animals they care for at Barn Buddies Rescue.

Season: The Las Vegas Farm is open throughout the year. The Fall Harvest Festival is held almost every weekend in October, including Halloween day. 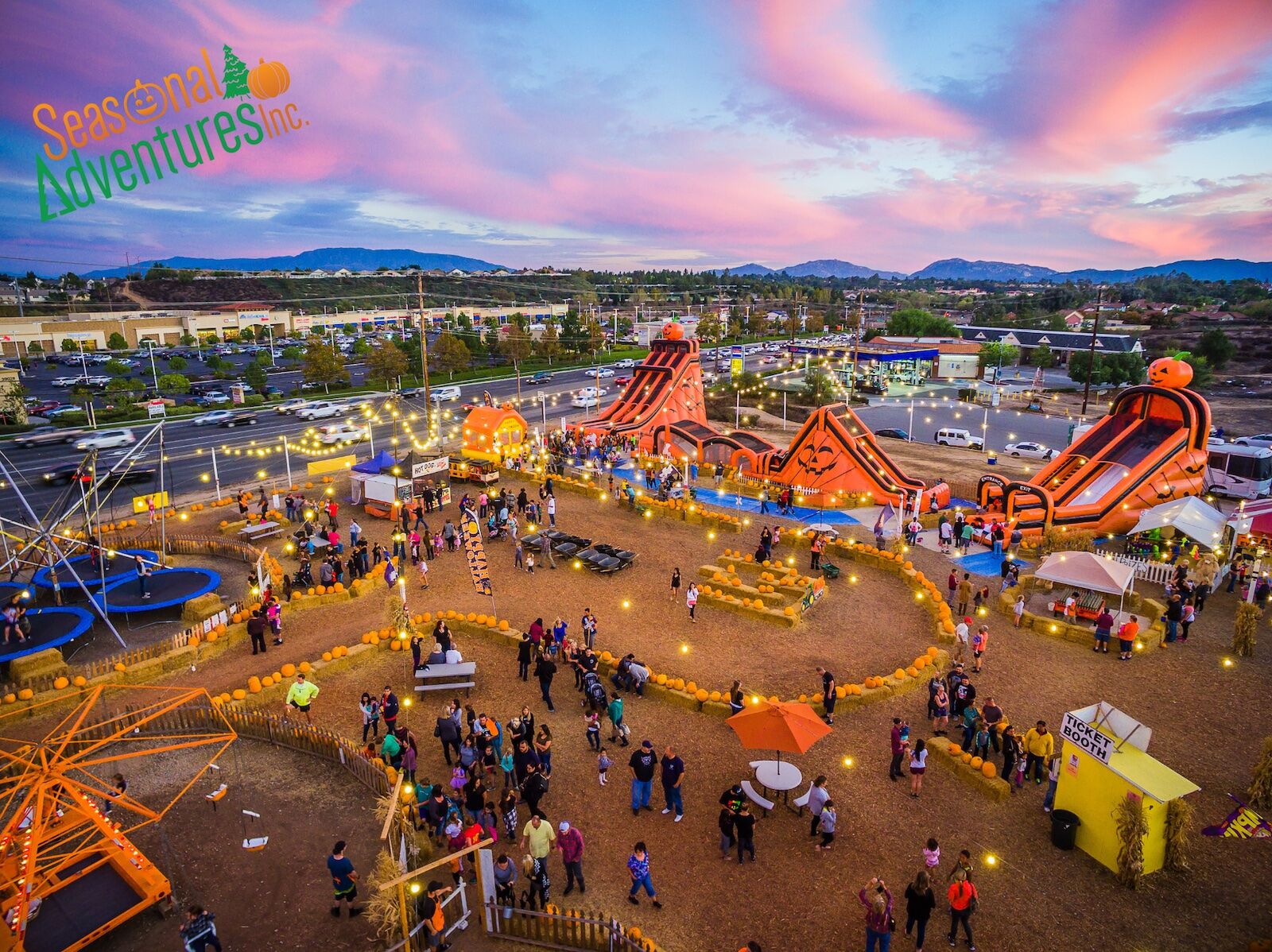 Seasonal Adventures has been a holiday tradition for families throughout California and Nevada since 1994. Not only are their family-friendly pumpkin patches a hit with everyone in the fall, but they later reopen in November as Christmas tree lots.

They have 10 locations throughout California and three in Las Vegas, giving your crew a variety of choices when it comes to getting the perfect holiday picture with fresh pumpkins and squash sourced from local farms.

At each location hay bales, corn stalks, and friendly scarecrows line the property giving you plenty of angles to get great pictures and create lifelong memories. At the end of the night you can pick out a pumpkin, pay for it, and take it home.

Beyond the pumpkin patches, Seasonal Adventures has mechanical rides, games, a petting zoo, inflatable jump houses, obstacle courses and more to make each outing a fun filled adventure for your entire family.

Admission is free to the pumpkin patches while ticket prices for the rides and activities range from $1.25 for a single ticket to a 40-pack that costs $46. Concessions usually consist of carnival fare including hotdogs, popcorn, and nachos.

The location at Silverado Ranch on the south side of the city is designed with a perfect mix of rides and entertainment for the whole family. Children must be at least 36-inch-tall to ride the rides, so smaller thrill-seekers may want to pass the time with the carnival-style games and the fair-inspired food offerings.

The newest addition to the Halloween Town Pumpkin Patch family, the Southwest Las Vegas location is perfect for the adults and teenagers in your crew. The rides and games here will keep your adrenaline pumping, so it’s advised you eat a turkey leg and candied apple after you have your fill of adventurous rides for the evening.

Halloween Town Pumpkin Patch locations usually open at the beginning of October, charge a $20 admission fee (you’ll get 25 tickets for rides and games), and include free parking. Well-behaved, leashed pets are welcome so they can celebrate with the family.

Season: Generally, from the beginning of October through October 31.

Epic StaysThis Hotel-Within-a-Hotel Might Be the Most Relaxing Part of the Las Vegas Strip
Tagged
Family Travel Holidays Theme Parks Travel Las Vegas, NV, United States
What did you think of this story?
Meh
Good
Awesome