Like the smog that blankets the urban sprawl and obscures the surrounding mountains, Mexico City itself tends to eclipse other destinations in Central Mexico. Most travelers can only manage to pull themselves away for a day trip or two, but Puebla is worth more than an afterthought.

Approximately two hours from Mexico City, Puebla City is the capital of a Mexican state by the same name. One of the country’s top examples of colonial architecture, its Historic Centre was deemed a UNESCO World Heritage Site in 1987. The city attracts thousands of day-trippers every year, but they soon realize that a single afternoon in Puebla City is like eating only a spoonful of the creamy, decadent mole served in traditional restaurants throughout the city — just a taste leaves you wanting more. From great shopping to some of Mexico’s best traditional restaurants, here’s why you should dedicate more time to Puebla City.

There’s more to Puebla than meets the eye — literally 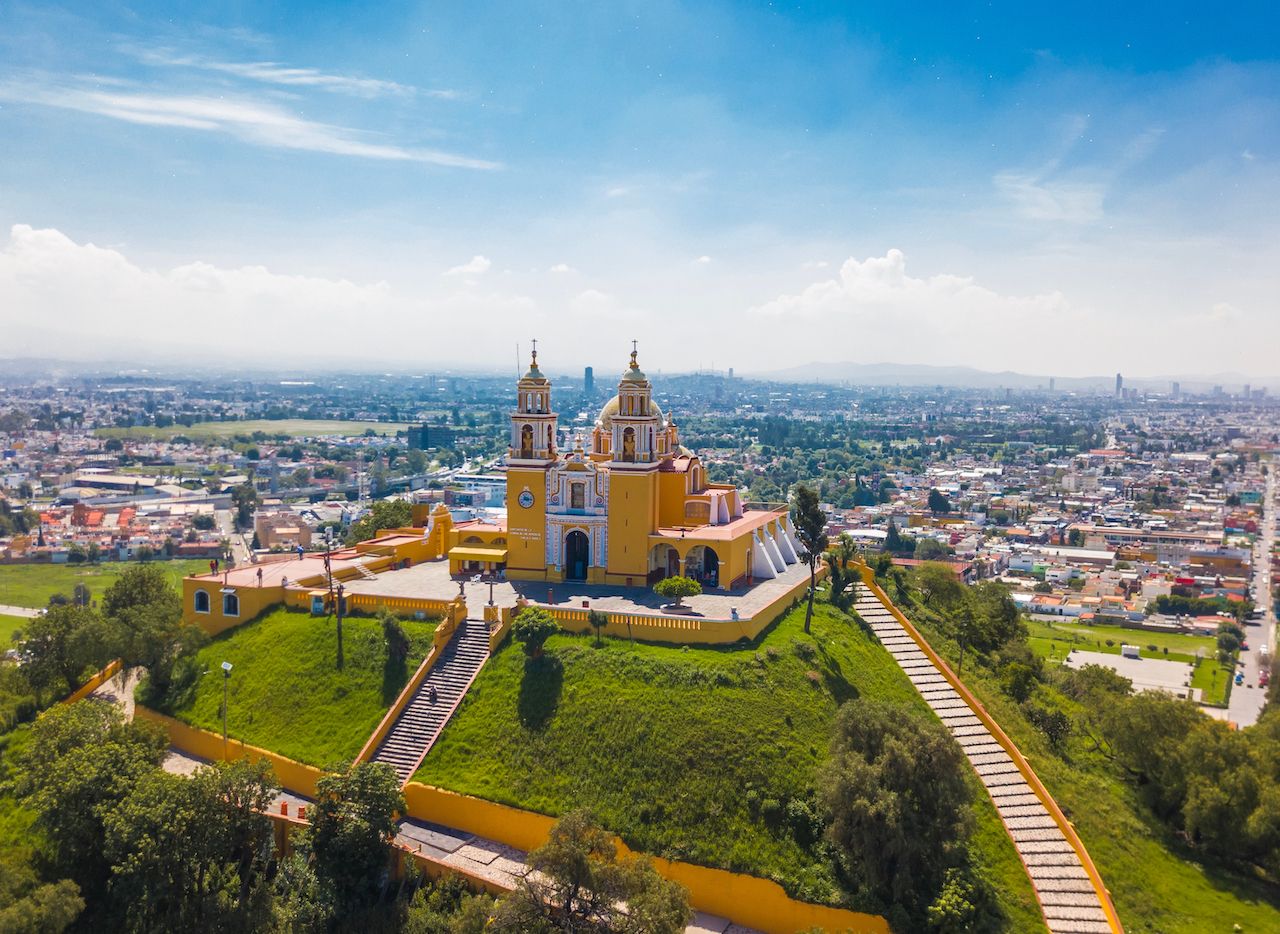 Upon realizing that Puebla City is the fourth largest metropolitan area in the country, experienced travelers with a budding passion for Mexico quickly dispel any notions about experiencing all the city has to offer in a few hours. As with the grassy mound that sits under a bright yellow church at the western edge of the city, there’s more to Puebla than meets the eye.

What at first glance appears to be a hill is actually the world’s widest pyramid. The 1,300 by 1,300-foot pyramid is known as Tlachihualtepetl. Erected in honor of the feathered-serpent god Quetzalcoatl, historians believe the civilization that once surrounded it shared economic and social ties to the Teotihuacan community.

You can spend an entire afternoon exploring this famed archaeological site, including a tour of the pyramid’s tunnel system. When you hike up to the church and take in the sweeping views of the city, you’ll see Popocatétl volcano in the distance.

The food scene is one of the best in Mexico 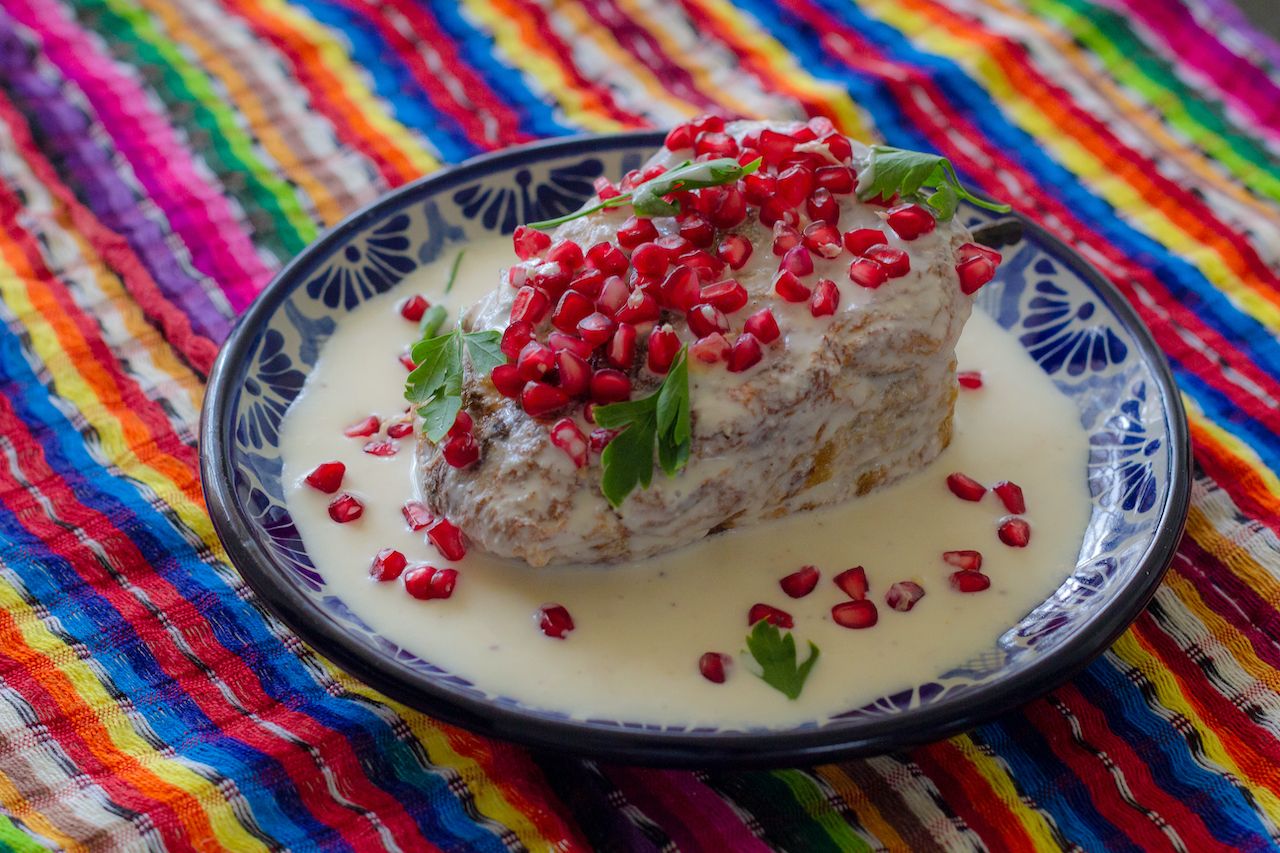 If you are not sure how to start planning your trip to Mexico, making it a culinary adventure and organizing your route around must-try dishes is a great idea. One of the country’s biggest debates — where do you get the best mole? This debate can be settled easily in Puebla.

That said, we recommend that you don’t dare fill up only on mole poblano — save room for another of Mexico’s most iconic foods and a specialty of Puebla: Chiles en nogada. In colonial times, the nuns of the region were believed to have dreamed up this patriotic dish of poblano chiles stuffed with picadillo and covered with a walnut-based cream sauce. Topped off with pomegranate seeds, the colors of the various ingredients represent the Mexican flag. Although delicious, travelers are sometimes surprised when they take their first bite and find out that chiles en nogada is served at room temperature. Also, note the chiles are only available from July through September.

When you need something to wash it all down, pop into La Pasita to sample the homemade liqueurs. Since 1916, this bar and liquor store has kept patrons very happy with its namesake beverage: A raisin-flavored sweet liqueur. If you’d rather not drink your dessert, visit Calle Santa Clara and check out some of the city’s oldest candy shops.

The city is steeped in history 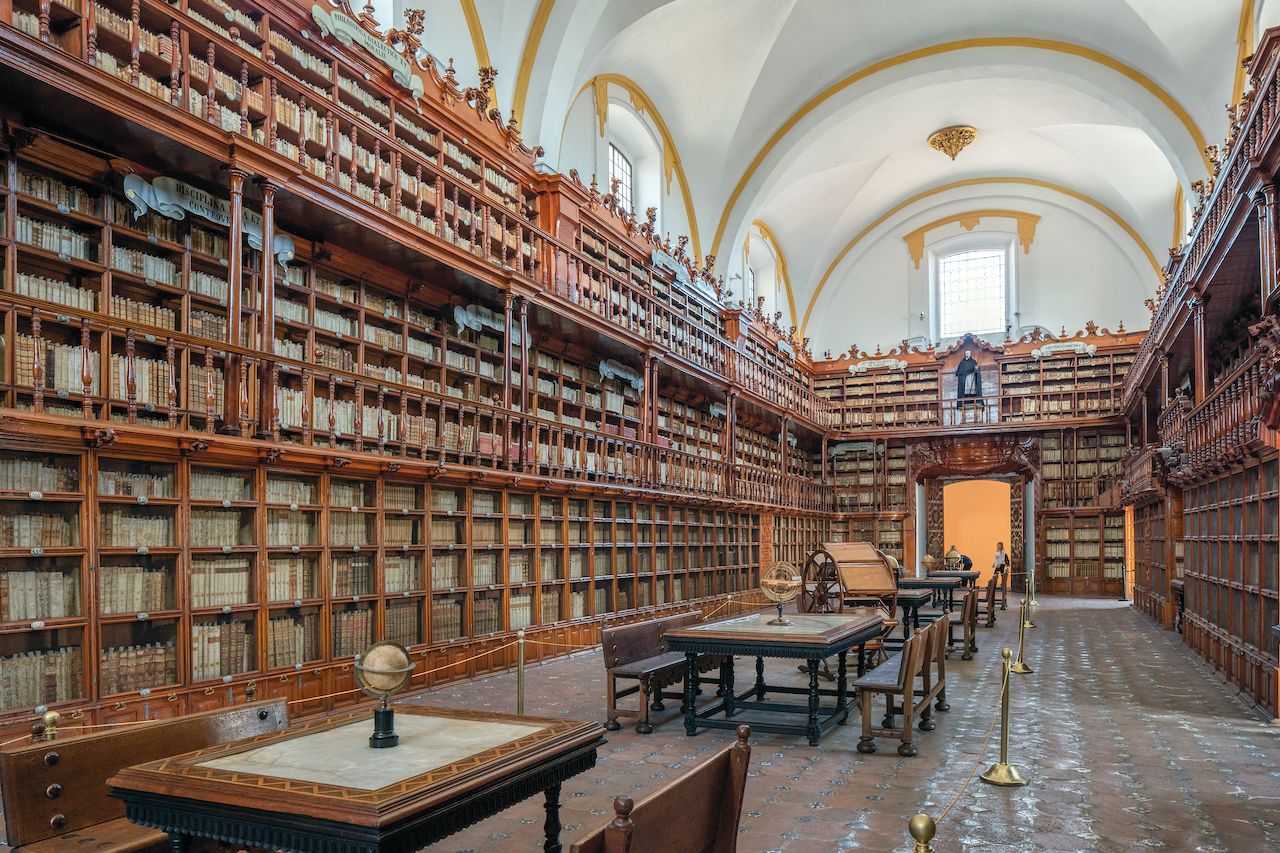 Many often mistake the annual celebration of Cinco de Mayo as Mexican Independence Day; however, the holiday actually commemorates the Mexican Army’s victory over the French Empire at the Battle of Puebla in 1862. During the war, the battle was a turning point, and Mexico stunned the world when they forced the French army into retreat. To celebrate Cinco de Mayo, Hundreds of thousands of visitors plan a trip to Puebla around spring to enjoy a 20,000-person civic parade, folkloric dancing, battle re-enactments, and an international mole festival. Because it’s Mexico, you can also expect lots of fireworks, and the city puts on some of the best displays in the country.

Puebla is also famed for having one of the finest libraries, and many claim the first in the Americas. Within Puebla’s Casa de la Cultura, the Biblioteca Palafoxiana houses more than 45,000 books and manuscripts, dating from the 15th to the 20th century. Even non-bibliophiles rave about the entertaining guided tours given by the library’s docents.

Another place to learn more about the history of the city is the Museo Regional de Puebla. It tells the story of the area, including fascinating facts about the Indigenous people who called the area home long before the Spanish even thought to sail across the Atlantic Ocean. The museum is also housed in a former Psychiatric Hospital and is one of the most Instagram-worthy buildings in the city.

Puebla has the best shopping in Mexico 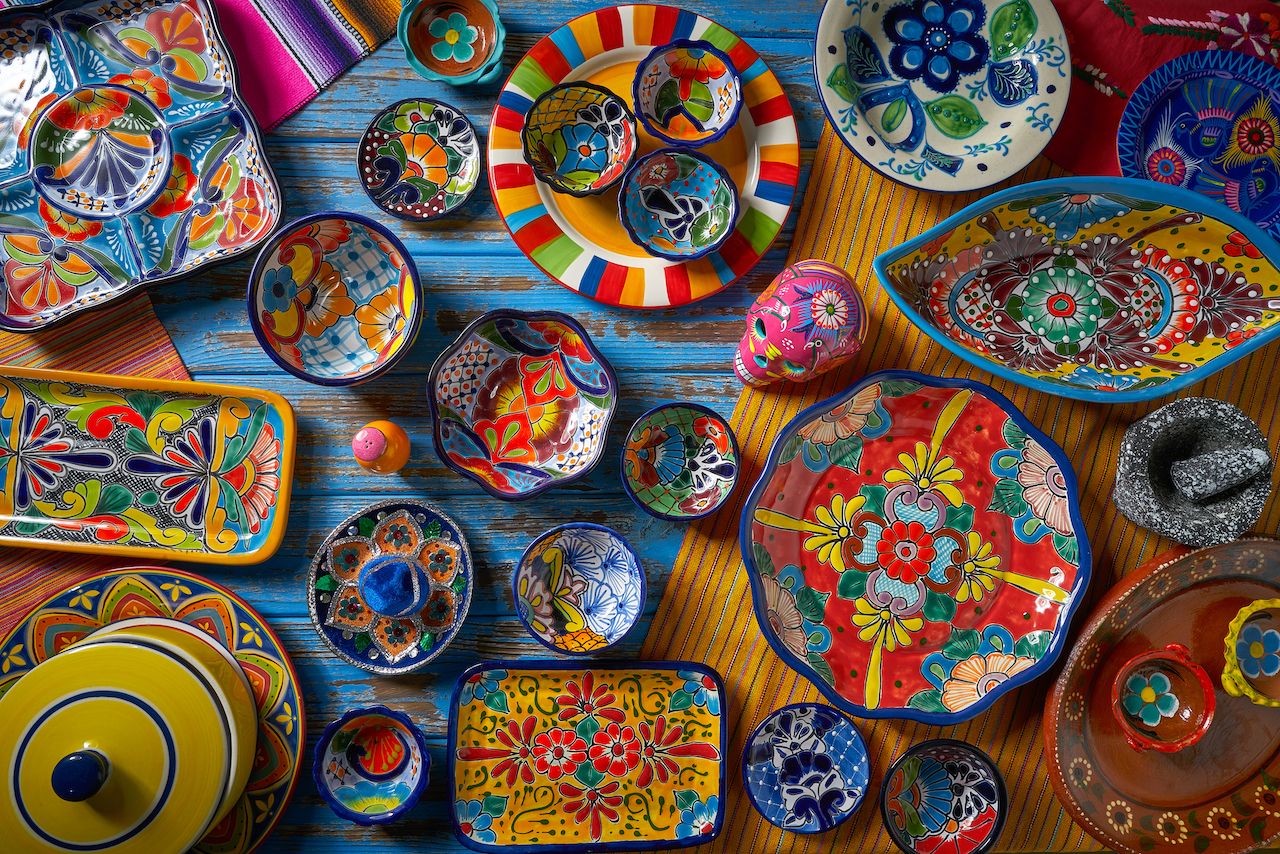 Forget kitschy fridge magnets and T-shirts that wind up at the bottom of your closet. Thanks to a long history of artisanal craftsmanship, Puebla is home to some of the best souvenir shopping in Mexico.

Talavera pottery is one of the most important and famous regional crafts in Puebla. There are various professional Talavera pottery workshops to visit, and it’s worth devoting a day to walk around and learn about this tradition and its history. Many offer free guided tours, workshops, and occasional courses. From brightly colored large serving dishes to adorable key holders, the artists create outstanding pieces of art. Viewing their techniques in person will give you a deeper appreciation of the craft. The best place for shopping for the vibrant ceramics is the colorful alley, Callejón de los Sapos. The shops in Puebla also have plenty of experience selling to visitors and will expertly wrap your purchase, so it survives your onward journey.

Puebla has its own must-do day trips 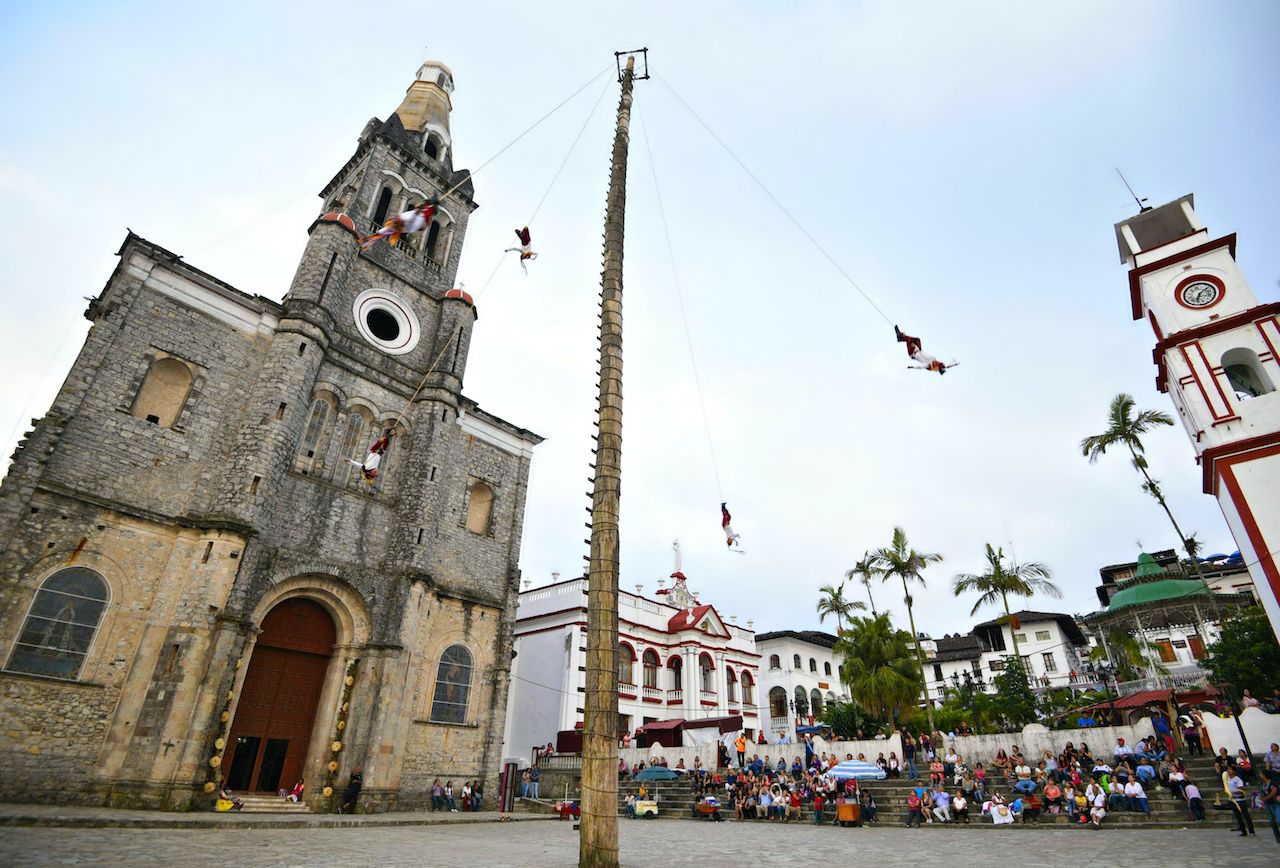 You can’t resign Puebla to a side trip from Mexico City because Puebla City has must-do side trips of its own. The mountain town of Cuetzalan is located three hours north of Puebla. On the weekends, “flying men” known as Voladores perform a traditional Mesoamerican dance during which they climb a nearly 100-foot pole outside the Parroquia de San Francisco de Asís. Even if you can’t make it on a performance day, Cuetzalan is still worth the trip. There are ample hikes around the town, many of which take you to beautiful waterfalls and natural pools. Roughly 25 minutes outside the town’s bounds is Yohuálichan, an extraordinary pre-Columbian archaeological site and one of the best in Mexico.

Other popular pueblos mágicos (magical towns) — a special designation awarded by Mexico’s Secretary of Tourism — in the state of Puebla include Atlixco, Pahuatlán, and Huachinango. Atlixco sits at the foot of the Popocatétl volcano, while Pahuatlán has a rich coffee culture. For more adventurous types, Huachinango offers mountain biking, boat tours, and fishing. With day trips like these, you won’t have any trouble rounding out your Puebla itinerary.

TravelMexico Has More Than 100 Magical Towns, and You’re Gonna Want To Take Note
Tagged
Culture Travel
What did you think of this story?
Meh
Good
Awesome