Canadians love their desserts. After all, what better way to bear the frigid Canadian winter than with a warm, gooey dessert drenched in maple syrup? Each region of the country has its specialty, but the one thing you can count on regardless of where you are is a colossal collection of confections that showcase the best local ingredients. Yes, you can expect plenty of maple syrup. These are the nine must-try desserts hailing from Canada. 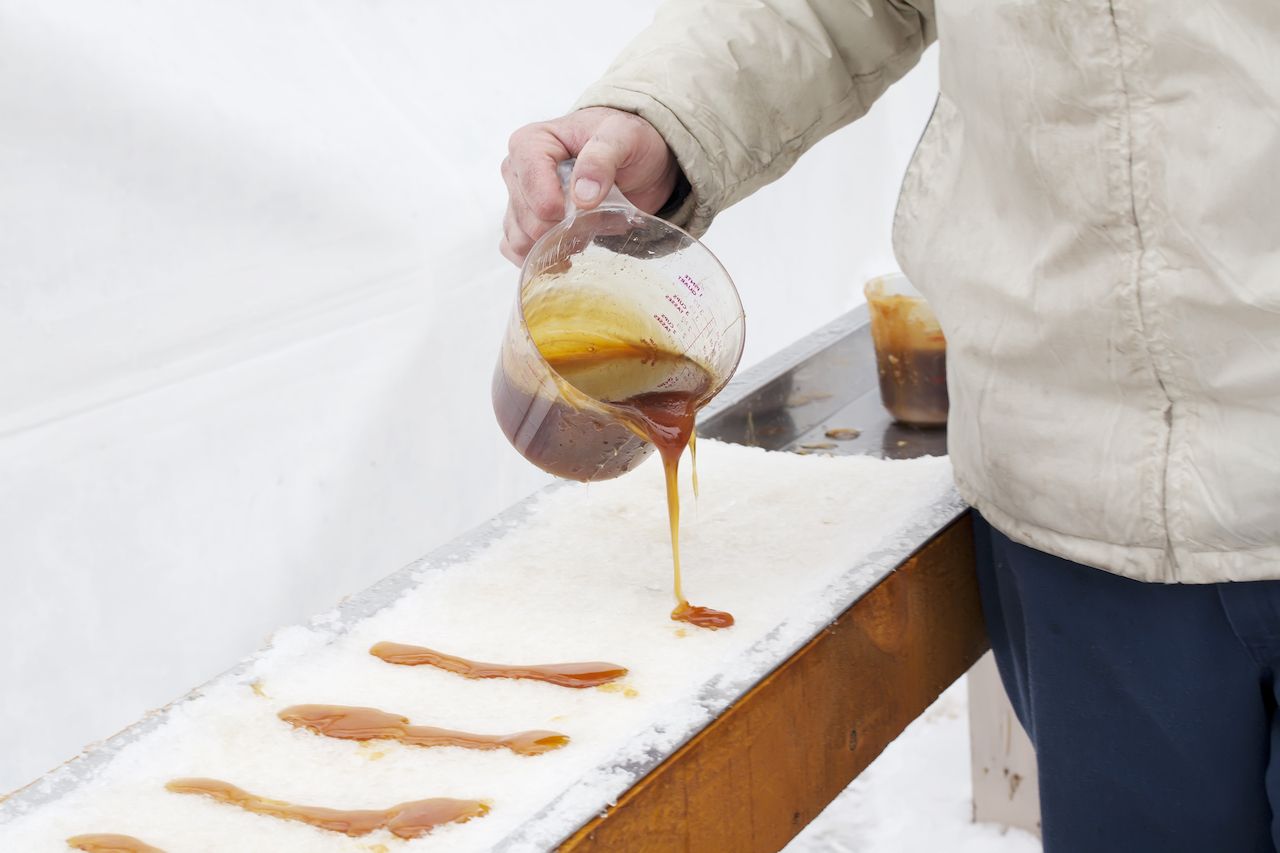 To get the real feel of rural Quebec, pull up your boots and trudge through the snow to a sugar shack, or cabane a sucre. These remote cabins are small-scale maple syrup producers that transform sap from sugar maple trees into the syrup we all know and love. It takes 40 liters of sap to make one liter of syrup. Boil that down even further to make maple taffy. Simply pouring the reduced syrup on a bed of snow forms a sweet, sticky taffy that can then be rolled onto a popsicle stick.

There are vendors with beds of maple-laden snow at public skating rinks, ski resorts, and winter carnivals. You can also visit one of Quebec’s many sugar shacks to learn about Canada’s most iconic export. The L’En Tailleur Sugar Shack just outside Quebec City has been serving maple taffy to guests for eight generations. 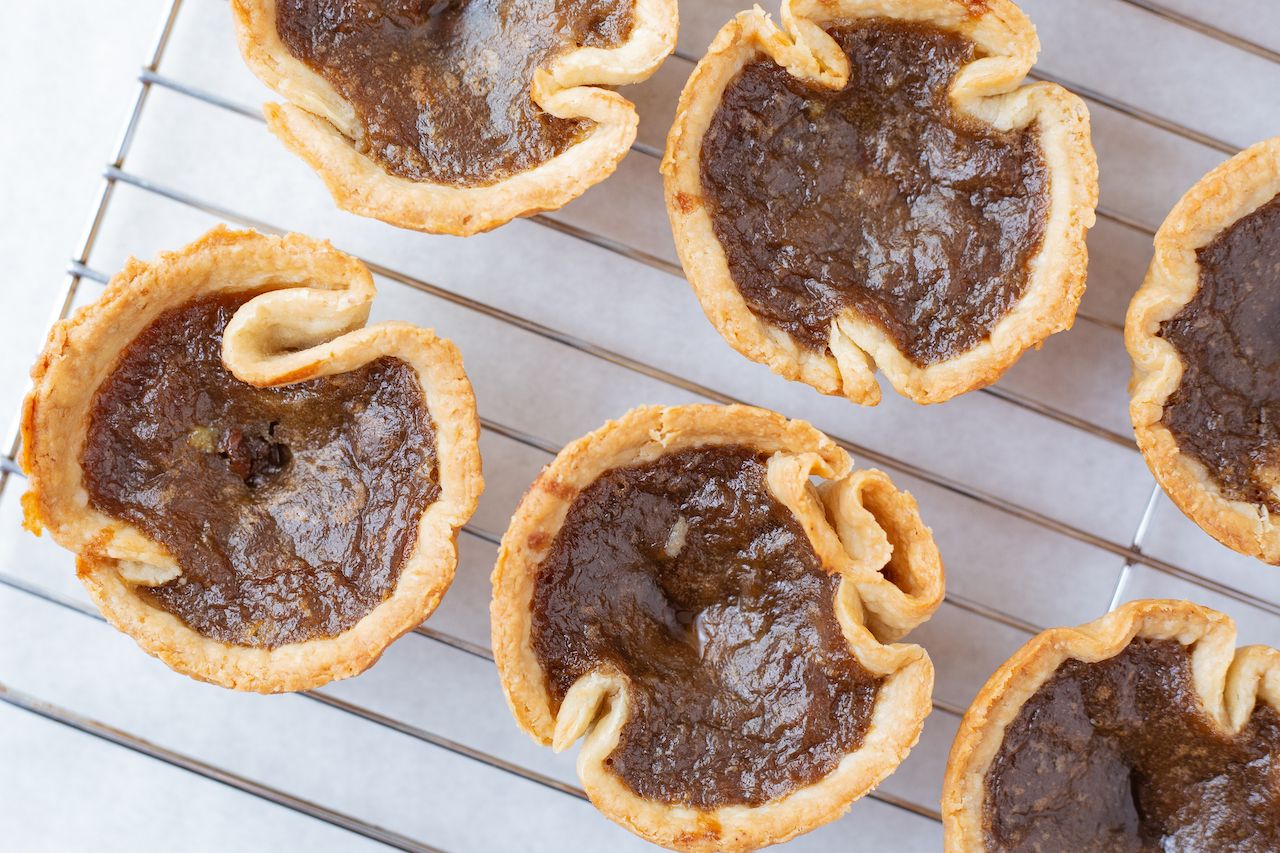 Butter tarts are ooey, gooey, and sweet. Buy them from farm stands in Ontario, but be careful with the sugary filling that too easily dribbles down your chin when eating. Butter tarts are simply a flaky tart shell filled with a sugar, butter, and egg filling. They’re also Canada’s most divisive dessert: The question of raisins or no raisins has been polarizing friends and families possibly since the tart’s inception.

The butter tarts are likely to have originated with the filles du roi, or “daughters of the king,” a group of around 800 single French women who were sent to New France to aid in settlement in the mid-1600s. The women began baking recipes they knew with ingredients on hand, so the story goes, and likely came up with the butter tart prototype.

Butter tarts are the pride and glory of small-town Ontario, where there are butter tart festivals, tours, and competitions. It’s difficult to choose just one spot to try butter tarts, but Doo Doo’s Bakery outside Toronto rings in the most accolades from the aforementioned competitions. 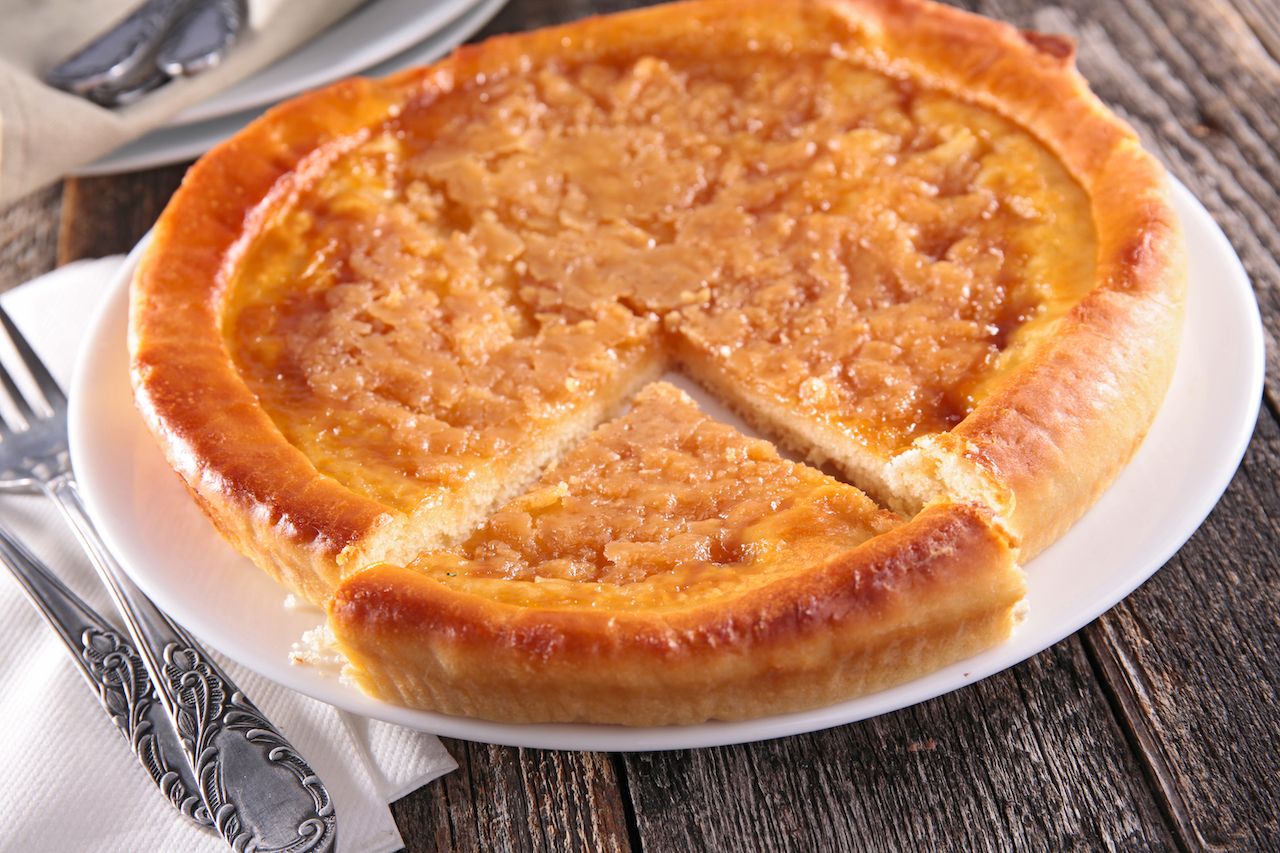 The sugar pie (tarte au sucre) is a cousin of the butter tart. In the early days of French settlement, sugar was often hard to come by, so maple syrup was used as a sweetener in desserts. Sugar pie is likely adapted from a European treacle tart, with maple syrup replacing the traditional brown sugar. Unlike butter tarts, sugar pie usually comes in full pie sizes and is a staple around the holidays. Sugar pie is one of the dessert classics at the famous Montreal restaurant Au Pied de Cochon. 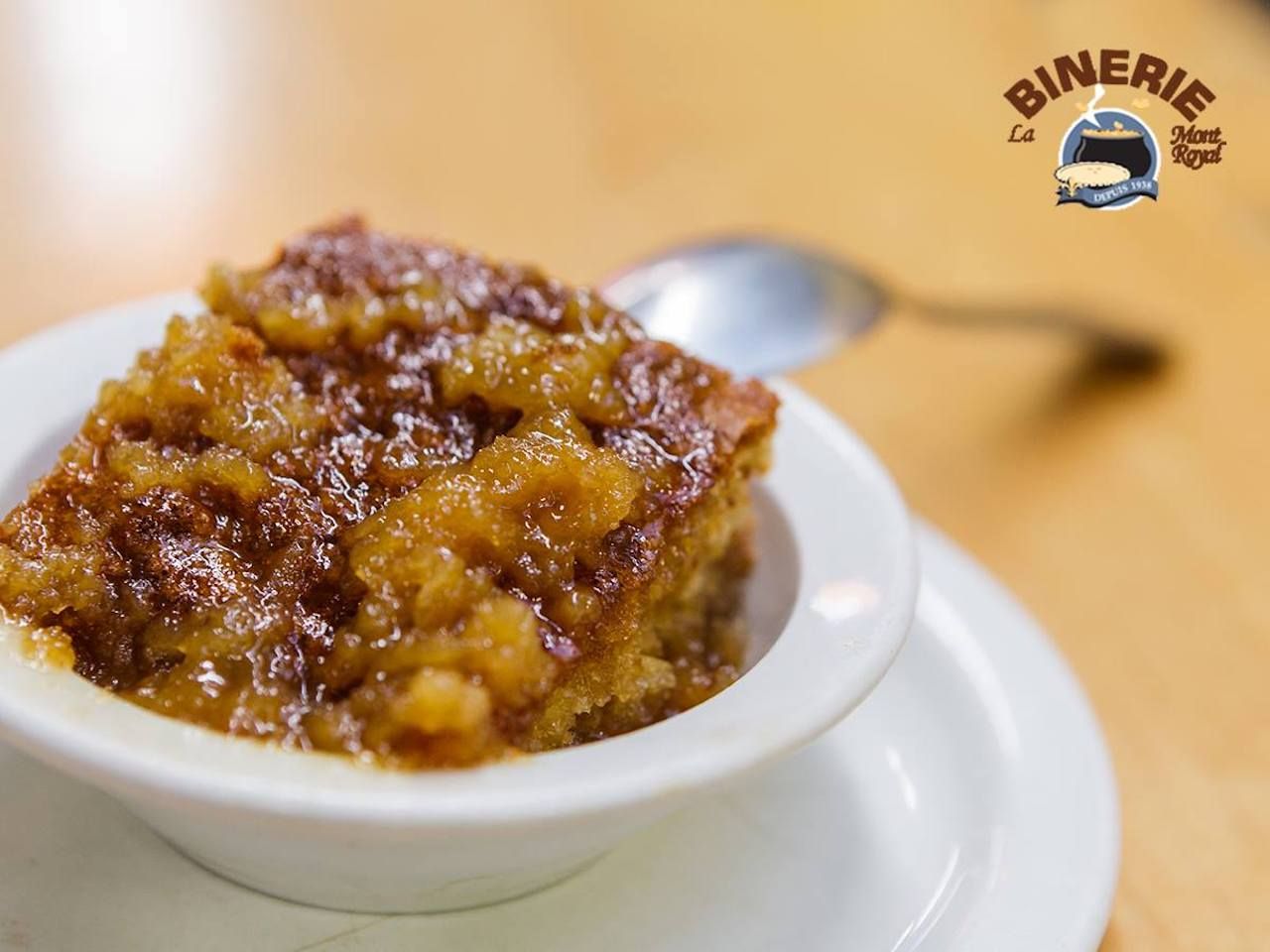 Pouding chômeur, which translates to “unemployed man’s pudding,” is a decadent dessert found in many upscale restaurants. Today, the dessert consists of biscuit dough or white cake drowned in a heavenly soup of cream and maple syrup, but the dish did come from humble beginnings.

The dessert was created by women who worked in factories during the Great Depression in the 1930s. Stale bread was soaked and baked in a brown sugar sauce, making a sort of bread pudding. Over the years, the bread was replaced with batter, and the brown sugar sauce grew to incorporate cream and maple syrup.

Pouding chômeur can be found across Quebec, but you can try the dessert at La Binerie in Montreal, a homey joint that’s been serving Quebecois mainstays since 1938. 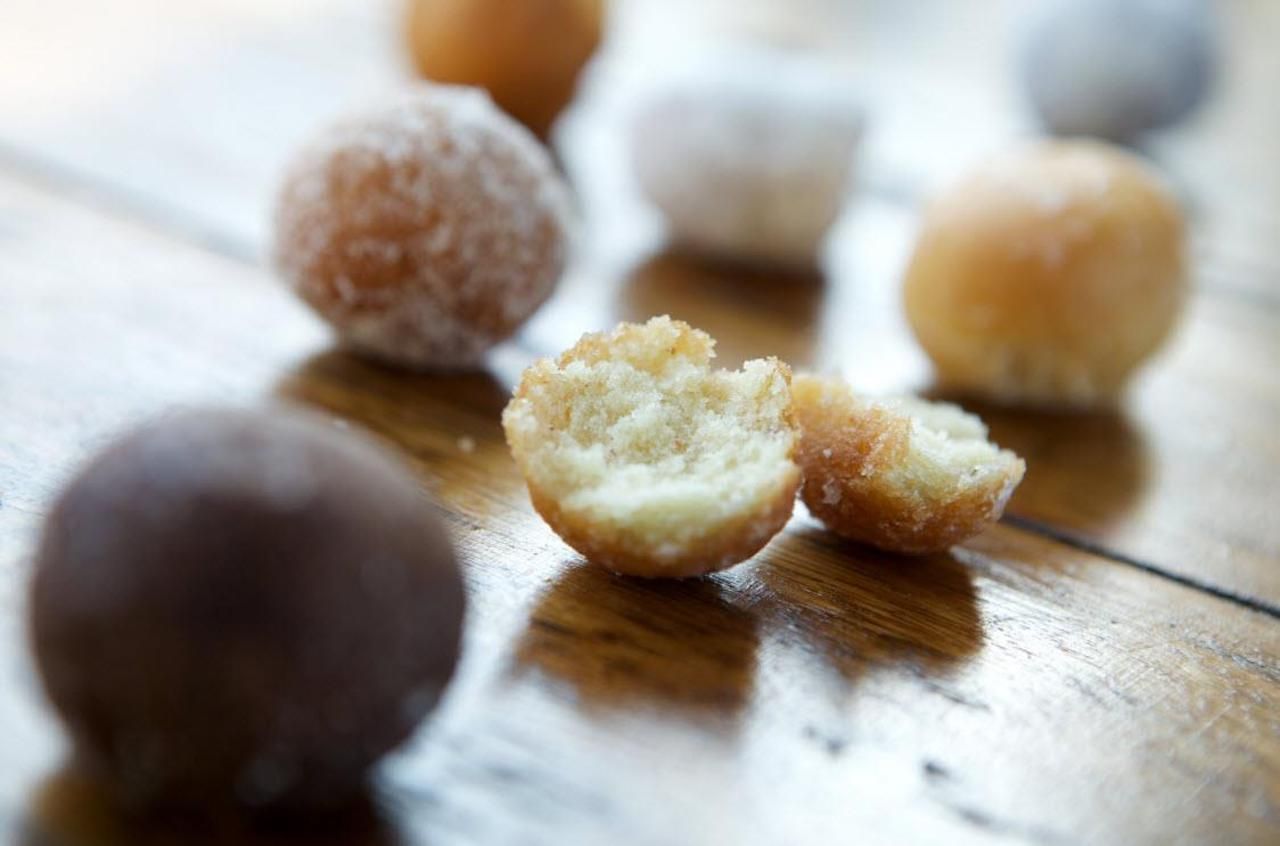 Timbits are the adorable little donut holes from the ultra-Canadian franchise Tim Hortons. They’re found everywhere in Canada — in the middle of a conference room, on the potluck table, and passed around at a hockey game.

Tim Hortons, named after the founding hockey player, began as a coffee and donut shop in Hamilton, Ontario. The franchise introduced the bite-sized confections in 1976 and now claims to have sold enough Timbits to stretch to the moon and back nearly five times. Pop by any Tim Hortons to pick up your pack of 10, 20, or 50 in flavors like apple fritter, chocolate, birthday cake, sour-cream glazed, old fashioned, honey cruller, or salted caramel.

Where to try: Tim Hortons 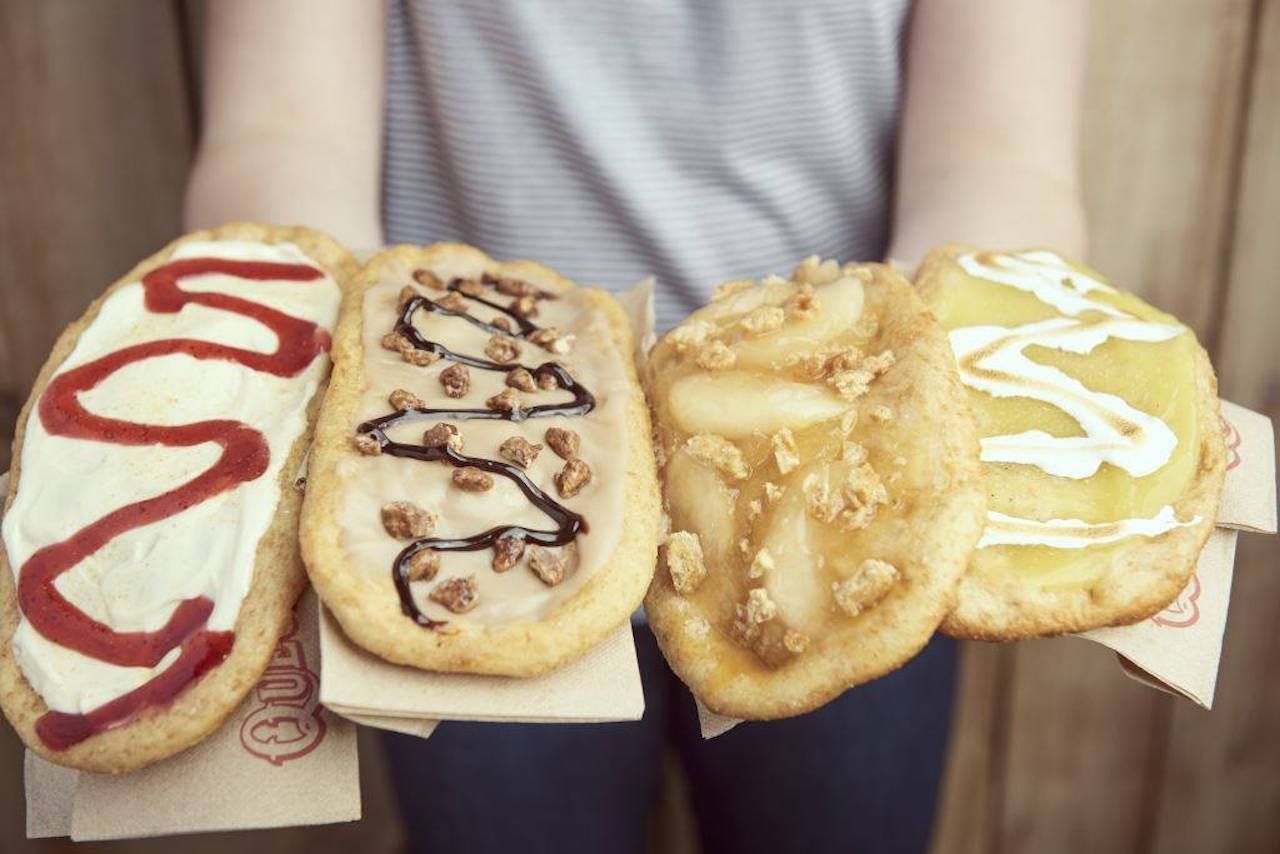 Not literal beaver tails. The BeaverTails dessert is a deep-fried, crispy-on-the-outside, chewy-on-the-inside doughnut. The pastries are made with whole wheat and are hand-pulled to make them resemble a beaver’s tail (hence the name). They’re typically topped off with cinnamon sugar, maple cream, or nutella, although options abound when it comes to toppings.

The iconic BeaverTails franchise began in 1978 when Grant and Pam Hooker began selling the dessert at a community fair outside Ottawa, Ontario. Grant said their recipe originated with his German-Canadian grandmother, and the Canadiana name was given by their daughter. The couple opened the flagship store in the Byward Market in downtown Ottawa and later began selling the pastries along the Rideau Canal, the world’s largest outdoor skating rink. Now, there are over 140 locations worldwide.

One of the most idyllic Canadian experiences you can have is skating on the Rideau Canal and enjoying a beaver tail and hot chocolate. While skating, you can grab your grub and warm your toes at one of the bonfires on the canal.

Where to try: BeaverTails 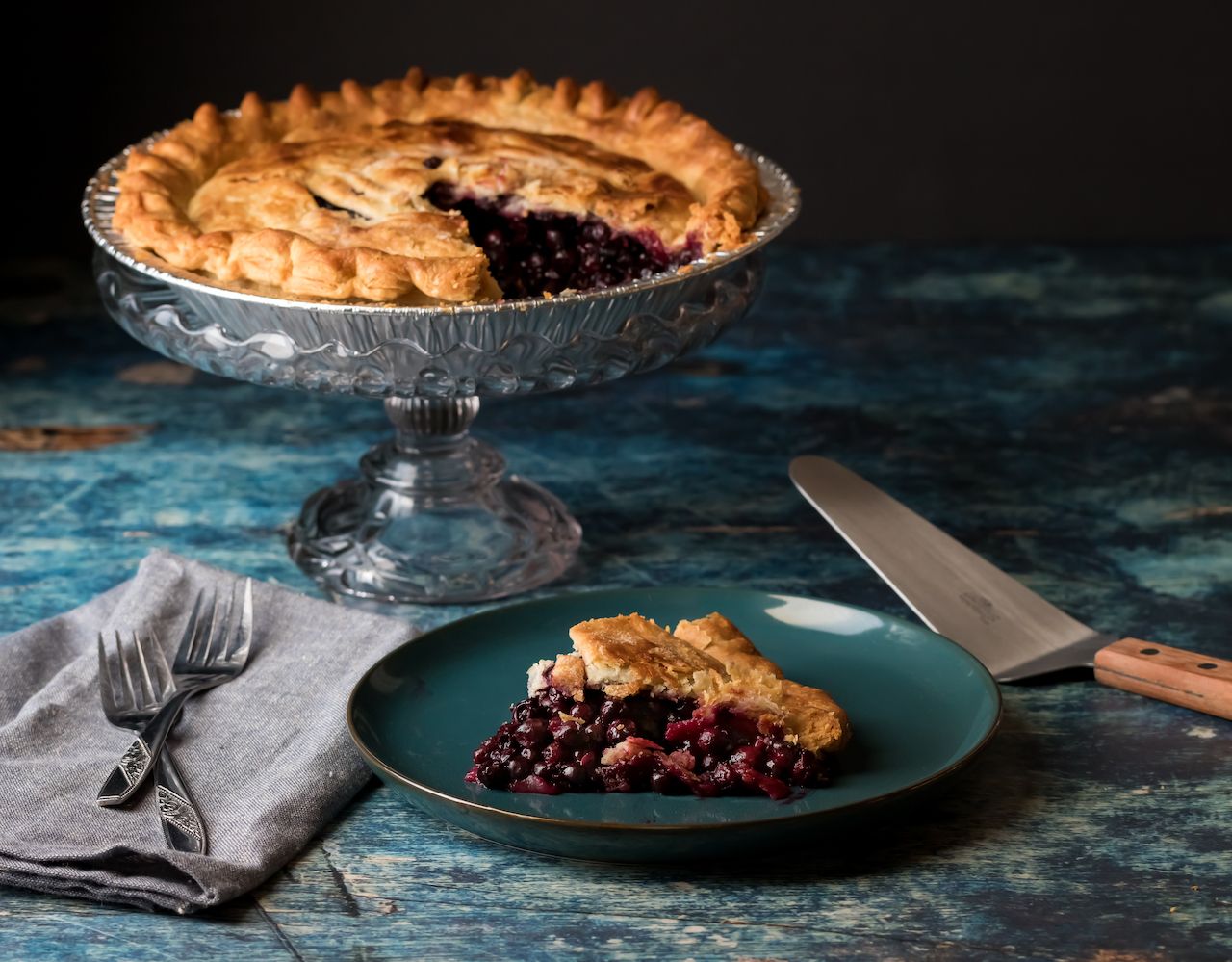 Saskatoon berries look like blueberries, are closely related to apples, and taste like sweet almonds. The prairie berries were fundamental to First Nations and settler diets, and they remain a favorite today. Many locals pick their own wild berries to bake into pies, but you can also try pies and other Saskatoon berry sweets at Berry Barn. 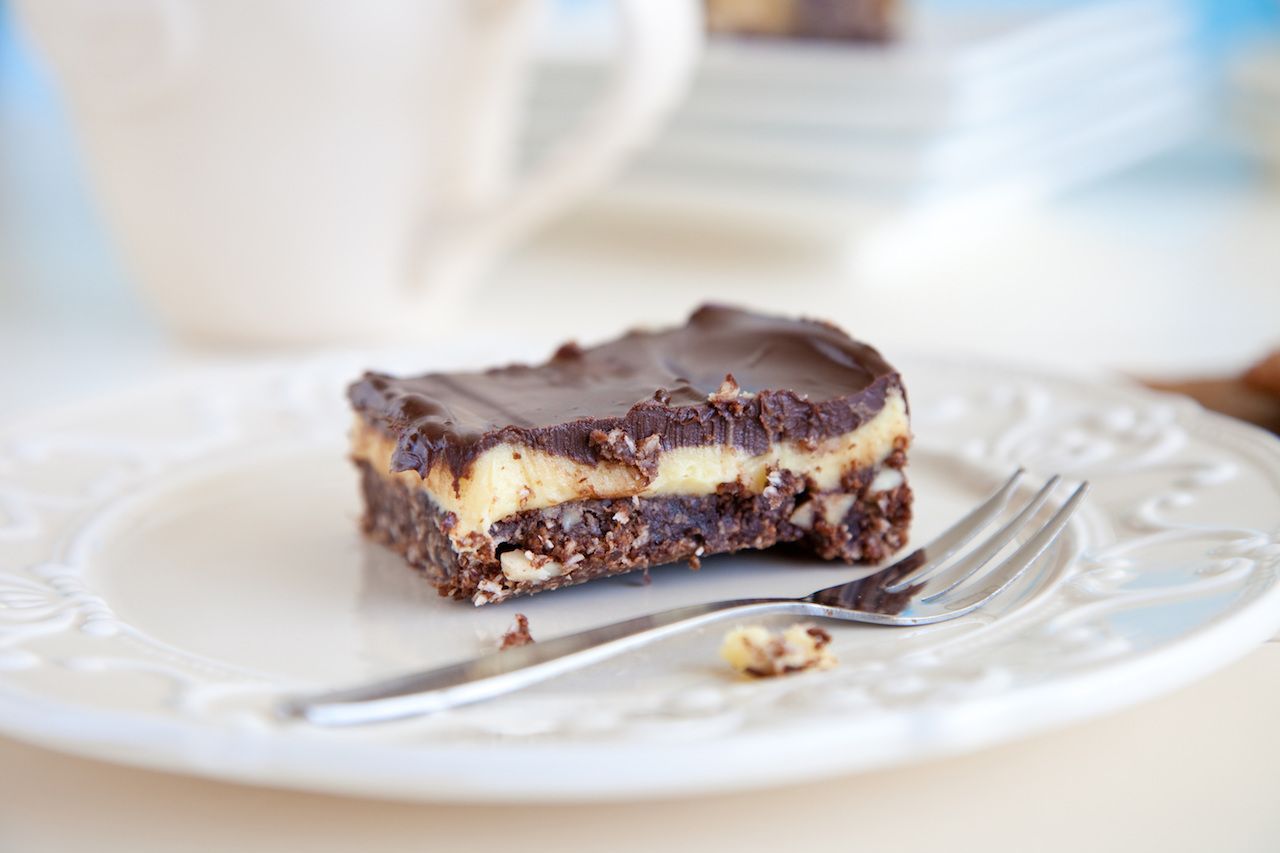 Visit the seaside town of Nanaimo, the bar’s namesake, and you’ll find these sugary squares in every bakery and cafe. The dessert bar is made with a chocolate and shredded coconut base that’s topped with a layer of custard frosting and finished off with a thin layer of chocolate ganache. The exact origins are unknown, although the first recipe was published in the 1952 Women’s Auxiliary of the Nanaimo Hospital Cookbook.

The bars can be found in cafes across Canada, but dedicated dessert dilettantes can partake in the Nanaimo Bar Trail, which includes 39 locations serving Nanaimo bars or Nanaimo bar-inspired desserts.

Where to try: Along the many stops on the official Nanaimo Bar Trail

Blueberry grunt is sort of like a blueberry cobbler, with tea biscuits cooked over a bubbling blueberry filling. The “grunt” part of the name is thought to come from the burbling sound of boiling the blueberries, and the dish is common in the maritime provinces where wild blueberries grow bountifully. The exact origin of the dish is unknown, but it likely comes from colonial settlers to the region.

The decadent dessert is usually topped with a generous scoop of ice cream or whipped cream, and a good place to try it is at Salty’s, a popular waterfront restaurant in Halifax, Nova Scotia.

Food + DrinkThe Most Iconic Food From Each of Canada’s Provinces and Territories
Tagged
Dessert Canada Toronto, Canada
What did you think of this story?
Meh
Good
Awesome