In an ideal world, we’d be able to show up in a new state, stroll into any establishment with a cash register, and purchase whatever type of alcohol our hearts desire. Happy hour would be at 9:00 PM on Saturdays, last call wouldn’t exist, and no one would look twice at you for throwing back Jell-O shots on the sidewalk in broad daylight. Unfortunately, this is not our reality. There is an abundance of rules governing alcohol consumption, and since this is the United States, these rules differ from state to state. While some states might appear to have pretty reasonable policies surrounding alcohol sale and consumption, others are more unusual. If you’re planning on traveling domestically and hope to enjoy some adult beverages along the way, these are the states with alcohol laws you should be aware of.

Massachusetts might be a blue state, but its alcohol laws are undeniably conservative. If you’re in Massachusetts and looking for happy hour, you’ll be out of luck. You can blame the Puritans or the state legislature — whichever makes you feel better — but according to Massachusetts law, happy hours are strictly banned. The law also prevents bars from hosting drinking games or offering any kind of discount drink promotion. You should also call ahead at your local supermarket before making a beer or wine run, as sales are only permitted during specific hours.

2. Pennsylvania and other “control states”: state liquor stores or bust

If your liquor runs all start to look suspiciously similar, there’s a reason. Pennsylvania only allows the sale of bottled wine and liquor through licensed state-run stores. A network of over 600 state stores covers the state, so you really shouldn’t find yourself in too much of a bind — unless, of course, you’re looking for beer, in which case you’ll have to find a beer distributor or special beverage outlet. Beer is not sold at the state liquor stores or at many grocery stores. Perhaps most important for travelers: You’re not legally allowed to buy alcohol from outside Pennsylvania and bring it across state borders.

And Pennsylvania isn’t alone in this. A total of 17 states are what are called “control states,” meaning all liquor and wine has to be first purchased by the government and sold through state-owned stores. These states are: Alabama, Idaho, Iowa, Maine, Michigan, Mississippi, Montana, New Hampshire, North Carolina, Ohio, Oregon, Utah, Vermont, Virginia, West Virginia, and Wyoming.

Drinking while driving, no matter what your blood alcohol content level, is always inadvisable. The danger to your life and others should be enough to stop you, let alone the fear of strict penalties, including loss of license, a steep fine, and negative social stigma. In Mississippi, however, there’s a bit more leniency. Mississippi has no laws against drinking while driving. You’re allowed to have an open container in your moving vehicle, and you’re even permitted to drink out of that open container as long as your blood alcohol content stays below the .08 limit. Again, taking full advantage of this relaxed policy probably isn’t the best idea, but it’s worth keeping in mind. 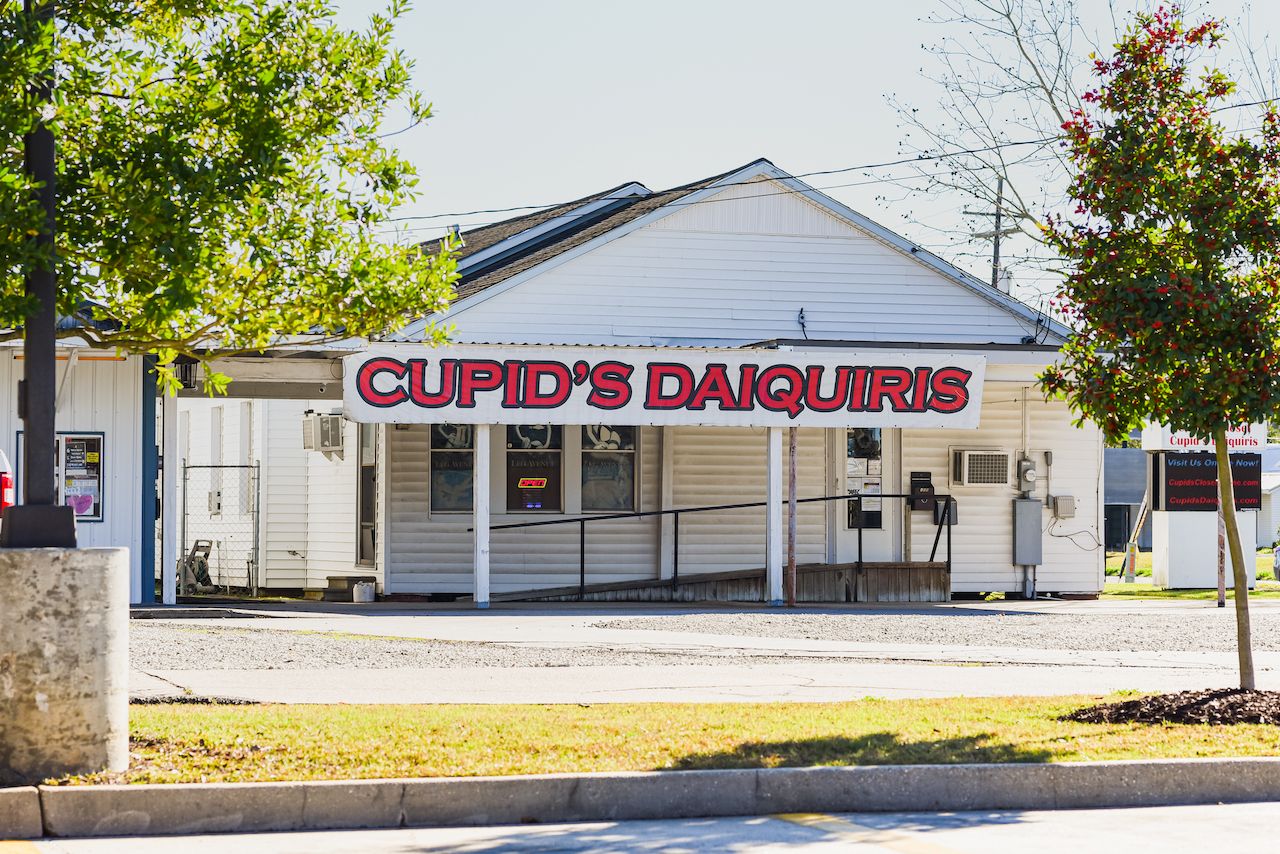 Louisiana is a refreshing change from other states with strict alcohol laws. In fact, at first glance, it appears to be alarmingly brazen with its alcohol policy. While many states around the country are enacting stricter punishments for drunk drivers, Louisiana is famous for its drive-through Daiquiri stands. Yes, you can go through a fast-food type window and instead of leaving with a McDouble, leave with Daiquiri in hand. This might sound pretty counterintuitive to preventing drunk driving, but there are open-container laws in place designed to limit drunk Daiquiri drivers. As long as your straw hasn’t pierced the lid of the cup, your drink is technically “closed,” though it doesn’t take too much of an imaginative stretch to see how this law is likely broken on a regular basis.

Many states have a variety of strategies for turning out the vote on election day, but Alaska might have the most creative (and genius) method. On election days in Alaska, the sale of alcohol is prohibited until the polls close. This means you can’t use drunkenness as an excuse for not voting. It’s also worth noting that it’s illegal to be drunk in any bar or restaurant that serves alcohol — which really just sounds like entrapment — and bars aren’t allowed to sell alcohol at a discount unless that discount is available every day of the week.

If you’re constantly frustrated by your local bar’s 1:00 AM last call and find yourself begrudgingly ordering an Uber home, Nevada is the answer. In Nevada, the law doesn’t stipulate that the dreaded last call must come at 1:00 AM, or 2:00 AM, or even 4:00 AM. No, bars are allowed to stay open for 24 hours, and many take full advantage of this leniency. If grabbing your own drinks at a store is more your bag, liquor can be sold at both supermarkets and convenience stores, and open containers are allowed in Las Vegas. Perhaps even more surprising — or not, if you’ve ever been to Vegas — public drunkenness is not a crime, because drunkenness is classified as a “health problem.”

Utah is the antithesis of Nevada when it comes to laws on alcohol sale and consumption. The state is infamous for its strict “Zion curtain” laws, which used to prevent bartenders from mixing drinks out of sight in restaurants. Now, though that law has been repealed, drinks must be mixed at least 10 feet away from children. To obtain a drink in a restaurant you must also order food, ordering double drinks is not permitted, and beer sold in grocery stores must be below 5 percent alcohol by volume (prior to November 1, 2019, it was 3.2 percent alcohol by weight, or around 4 percent). According to recent legislation, establishments are also required to have conspicuous signage indicating whether they are a “bar” or “restaurant.”

CultureYour Guide To Drinking Laws in the Arab World
Tagged
Restaurants + Bars United States
What did you think of this story?
Meh
Good
Awesome