The hard wooden booth at Johnnie’s Drive-in hardly seems like a throne fit for a king. It’s square and upright in the way furniture designed before the 1950s is, like an old school desk that makes you feel sorry for school kids of yesteryear.

But the booth was good enough for a young Elvis Presley, native of Tupelo, Mississippi, and a regular at Johnnie’s, the city’s oldest restaurant. Look above the booth, and you’ll see a picture of the King, smiling over his hamburger in this exact spot. Johnnie’s is but one of the many Elvis-infused attractions in Tupelo, a city oft visited for the King’s birthplace and left just as fast. But delve past the shotgun shack on Elvis Presley Boulevard. and you’ll find a place worth sticking around a while, where music history, food, and the King of Rock and Roll converge.

Start in the birthplace of The King 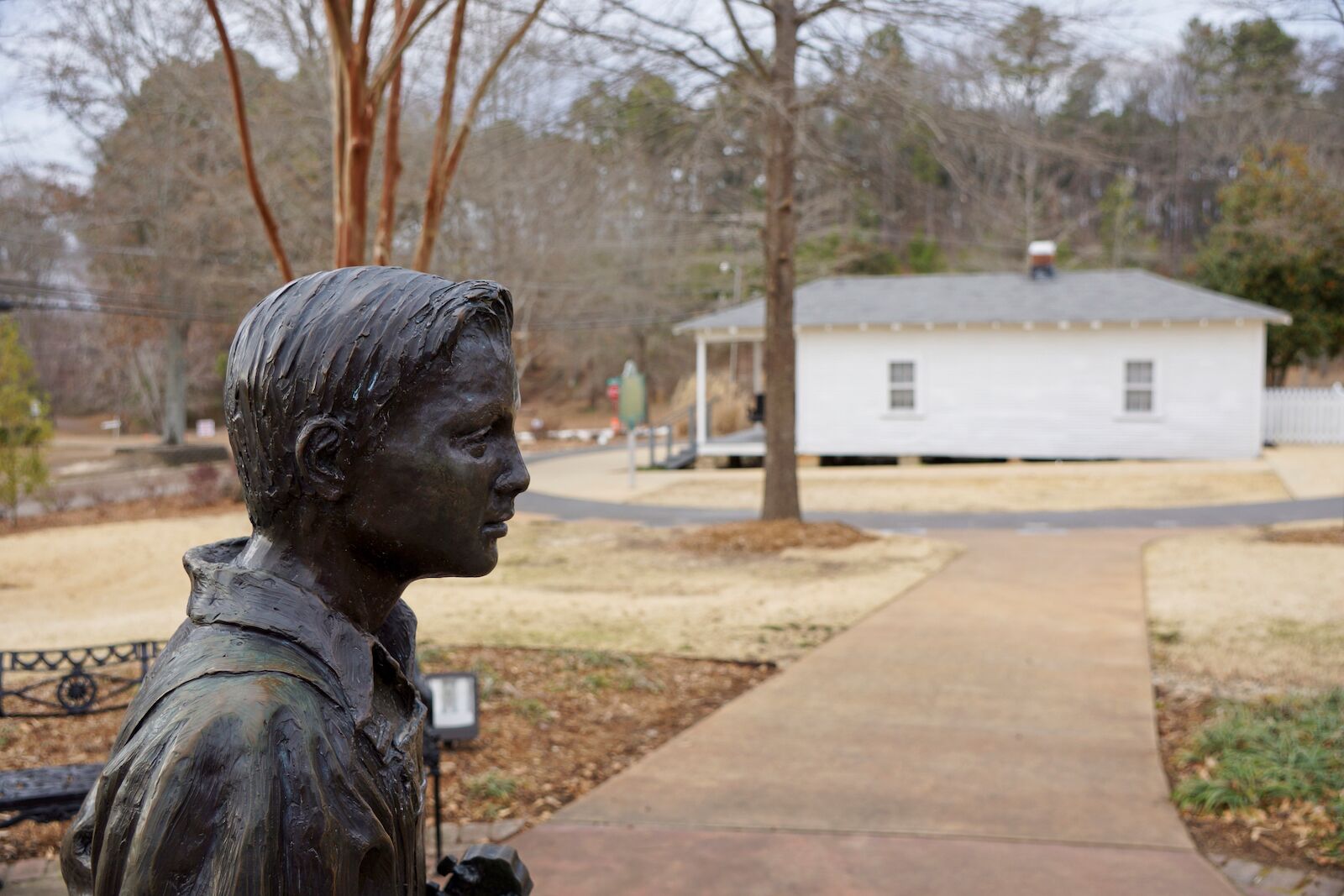 No city in America is as devoted to one person as Tupelo is to Elvis Presley. While it stops short of being a theme town, his presence is everywhere. From murals covering downtown streets to plaques marking places The King swam and watched movies, Tupelo is an Elvis fan’s dream. It’s an immersion in all things Elvis, where a stroll through downtown teaches you about his famous homecoming performance at the Mississippi-Alabama Fair and Dairy Show, and a stop by a local theater teaches you how Elvis got his Hollywood inspirations.

The Elvis Presley Birthplace and Museum is certainly the city’s main event, like the Eiffel Tower in Paris or the Empire State Building in New York. The tiny house where the King came into the world has expanded to an entire campus complete with a biographical museum and a stunning hilltop overlook. It’s a brilliant contrast when coming from Graceland, seeing how Elvis started in such a humble space.

From the birthplace, Tupelo has a guided Elvis trail, best done by bicycle when the weather is cooperating and by car when it’s not. The 13-stop tour takes you past the elementary and middle schools Elvis attended, his old favorite swimming hole, and the Tupelo Hardware store where his mother bought him his first guitar. Stop in, and the store staff will just as easily tell you about how Elvis bought his guitar as they will sell you a drill bit.

Where to eat and drink in Tupelo

All the Elvis stuff can be done in about half a day. But once you’ve gotten your Elvis fix, exploring the rest of the city gives you a far stronger sense of the place the King was born. Downtown is blissfully walkable, and from Tupelo Hardware you’re less than five minutes on foot from fantastic food, eye-popping desserts, and bars full of welcoming locals.

Everywhere you go in Tupelo, someone will be happy to talk your ear off about all there is to see. Your first stop should be The Stables, a cheerful dive with $2 beers set in an old livery. Inside, a cast of characters who’ve all known each other for years trade friendly barbs as they yell over each other to offer recommendations. Don’t be surprised if the owners come out with a plate of their trademark blackened catfish nachos, just because they want to show off for an out-of-towner.

Odds are someone will also send you in the direction of Kermit’s Outlaw Kitchen. This funky, fast-casual spot slings fruit-forward frozen margaritas, best enjoyed while people-watching on the sidewalk. The menu is a mix of southern smoked specialties and modern global stuff, so you can pair pork belly burnt ends or pulled smoked chicken with a poke bowl and edamame.

Further down Main Street, pop into the Amsterdam Deli, a middle eastern-inspired bar and restaurant that’s also home to Tupelo’s best pizza. The intricate ceiling and brick walls make it feel like an historic bar in a big city. And the gyro nachos and Masakhan chicken wraps show that Tupelo’s cuisine extends far past bar food.

Around the corner and across from the towering historic courthouse you’ll find Crave, where calories-don’t-count desserts complement an impressive lineup of single-origin coffees. Opt for the cast iron skillet chocolate chip cookie, topped with ice cream and chocolate sauce.

While the city doesn’t have any breweries, it is home to the state’s only meadery at Queens Reward. This spot is set under towering pine trees and offers wine-style meads made from local Tupelo honey that are perfect for sipping on a hot summer day. Also be sure to try one of the mead slushies, which are mead-spiked fruity frozen drinks that make northern Mississippi feel momentarily like Mexico.

For live music, meander out of downtown a bit to Blue Canoe. Local acts play here almost nightly, but the food is just as much a draw. The place is typically packed, as people enjoy stuff like Memphis rubbed edamame, duck quesadillas, and pot roast with cornbread waffles as guitarists strum in the background. It’s also got Tupelo’s best beer selection, and a crowd of locals who’ll happily share more places to explore.

Cap off the night at Spring Street Cigars, a New Orleans-style cigar lounge across an alley from Stables. The two-story lounge boasts a walk-in humidor, full bar, and expansive balcony, where you can relax with a smoke and a bourbon in the warm night air.

Where to stay in Tupelo

Tupelo’s greatest new addition is the gleaming new Hotel Tupelo, a Wyndham-flagged boutique that looks like it’s been standing for decades. In truth, it only opened within the last year, boasting floor-to-ceiling windows that integrate the indoor space perfectly with Main Street outside.

It’s home to Jobos Surf & Turf, a Caribbean and Gulf seafood spot that’s equal parts upscale eatery and city social center. The sunny patio is a go-to for happy hour, and when the summer swelter is too much the action moves inside to Tupelo’s only shuffleboard table. Stay for dinner, and you’ll find the best seafood in the city, where the crazy octopus with bacon lardons stands out for starters, and the Santa Cruz steak and ginger scallion noodles with pork belly will finish you off into a food coma.

Indigenous history right outside of Tupelo 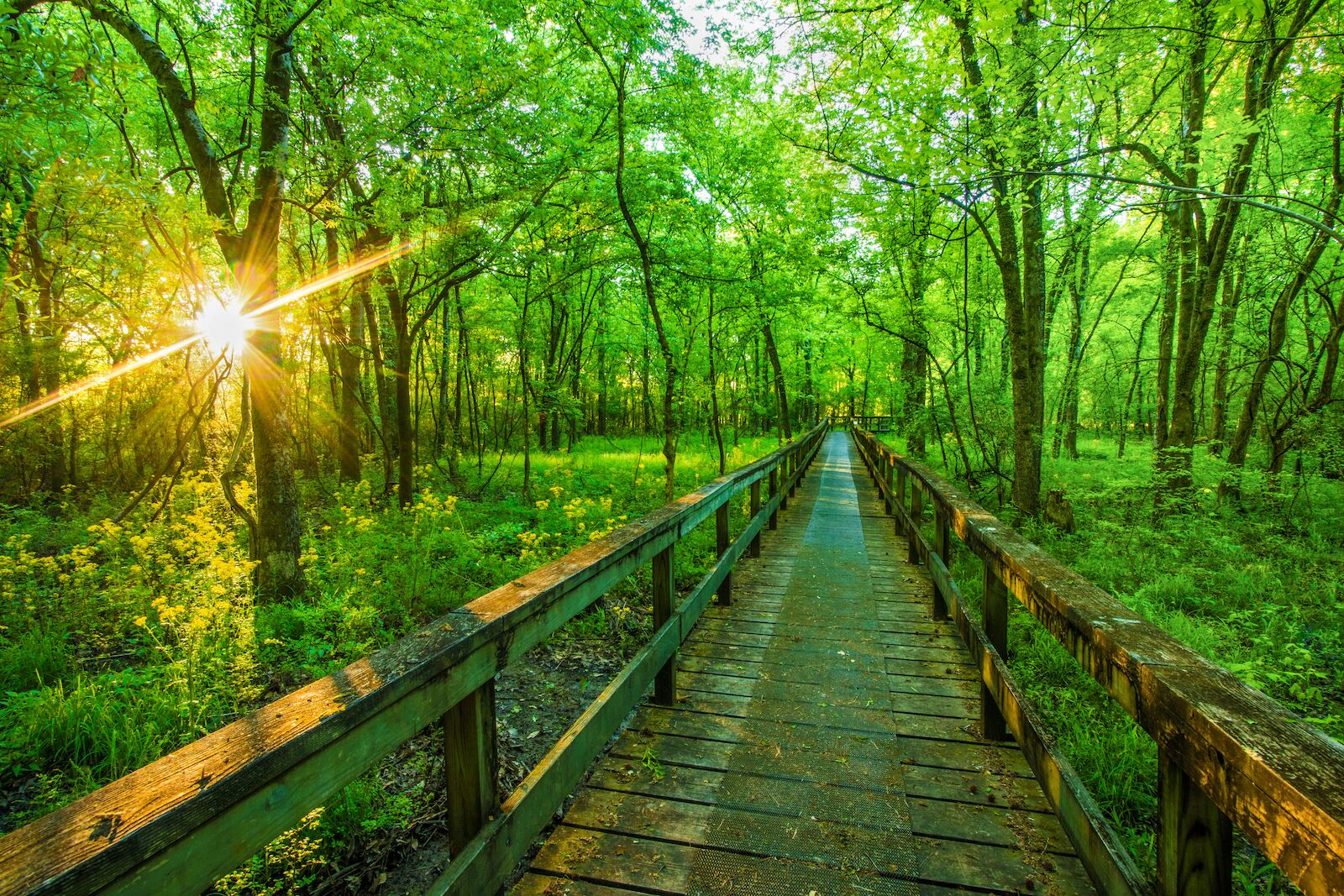 Before leaving town, you can burn off some food and learn a little bit of history along the Natchez Trace. The US National Parkway cuts just west of downtown, and within three miles of the crossing you’ll reach a Chickasaw Village site. Here you can walk around an old native encampment, then stroll through the woods and learn about how Indigenous people used local plants.

A mile or so further sits the Natchez Trace visitors’ center, with a museum telling the story of the trace and its role in American history. While it quizzically glances over the trace’s use during the domestic slave trade, it does explain its importance as a route from Appalachia to the Mississippi River, and the role it played in early Southern development. It also has miles of hiking trails to explore the woods intrepid traders once roamed.

Tupelo is far more than an educational day trip for Elvis die-hards making the pilgrimage to Graceland. It may have an inescapable Elvis aura, but with food, drinks, and a sprinkling of history, it’s a fun place to immerse yourself in the world where the King began. Whether you’re eating a burger in a booth fit for a king, or sipping mead in the woods, Tupelo is far more than a white shack on a hillside. Take the time to delve into the city, and you’ll gain a new appreciation for the land that birthed the King.

CultureBars That Don’t Close and a Deep South Cultural Education in Natchez, Mississippi
Tagged
Music + Nightlife Travel
What did you think of this story?
Meh
Good
Awesome