We’ve been conditioned by our favorite movies to have some pretty unreasonable expectations for Christmas. A heavenly white snowfall will of course blanket the ground in the preceding days, setting the stage perfectly for the holiday itself. Then, on the 25th, we’ll look out our windows in the morning like wide-eyed children to find more snow drifting down, race downstairs to drink boozy eggnog, and fall asleep by the fire with a new Red Ryder BB gun. Unfortunately, in many parts of the country the reality is much different. Rain instead of snow. Dead, muddy grass instead of a white blanket. And an embarrassing bunny rabbit onesie instead of a BB gun. We can’t help you with the onesie, but we can make sure your Christmas is actually as white as you’d hoped. Some parts of the country are much more likely to get snow than others, and if you’re planning a family Christmas getaway, those are the places you’ll want to go. From Lake Placid to Mammoth Lakes, these are the best cities to visit for a white Christmas. 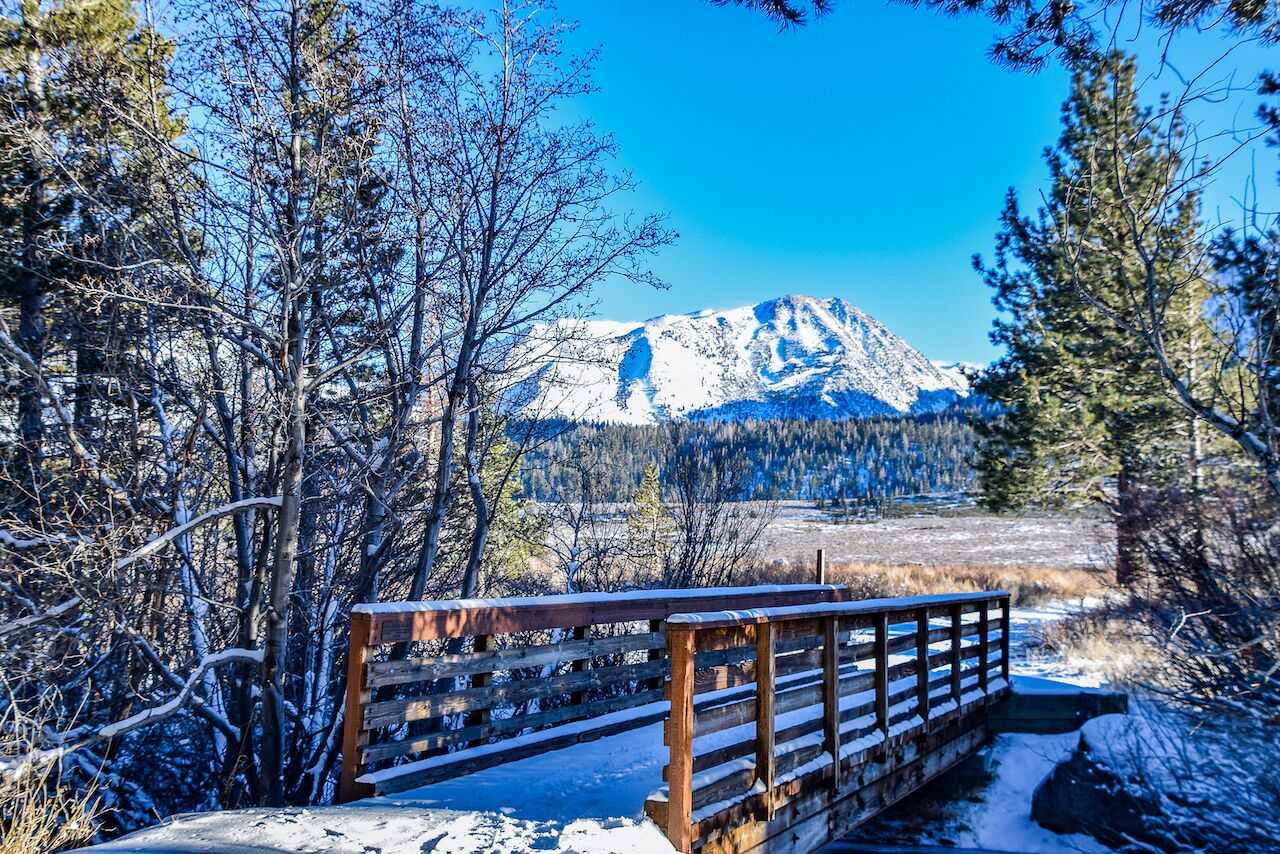 California weather has a reputation for being mild year-round, but Mammoth Lakes in the Sierra Nevada Mountains actually has an average December low temperature of 17 degrees. The Mammoth Mountain Ski Resort often remains open as late as mid-June thanks to the volume of snow regularly seen in the region. But you don’t have to be a skier to enjoy Mammoth around Christmastime.

Mammoth is ideal for families who love the outdoors, and would rather spend their white Christmas diving into the snow than admiring it from the window. Strap on the skates at Mammoth Ice Rink, or go snow tubing at Woolly’s Tube Park & Snow Play. There are also several public sledding and tubing hills in Mammoth Lakes to explore if you’ve brought your own equipment. With over three million acres of wilderness and public lands around Mammoth, there’s also plenty of trails  for snowshoeing and cross-country skiing — particularly in the Inyo National Forest. If you’d prefer a slightly less rugged experience, you can choose to tour the backcountry from the heated luxury of a snowcat. The Minaret Vista Apres Ski Tour brings visitors on a sunset excursion to Minaret Vista, where you’ll enjoy stunning views of the mountains with a side of chocolate-covered strawberries and a glass of wine. 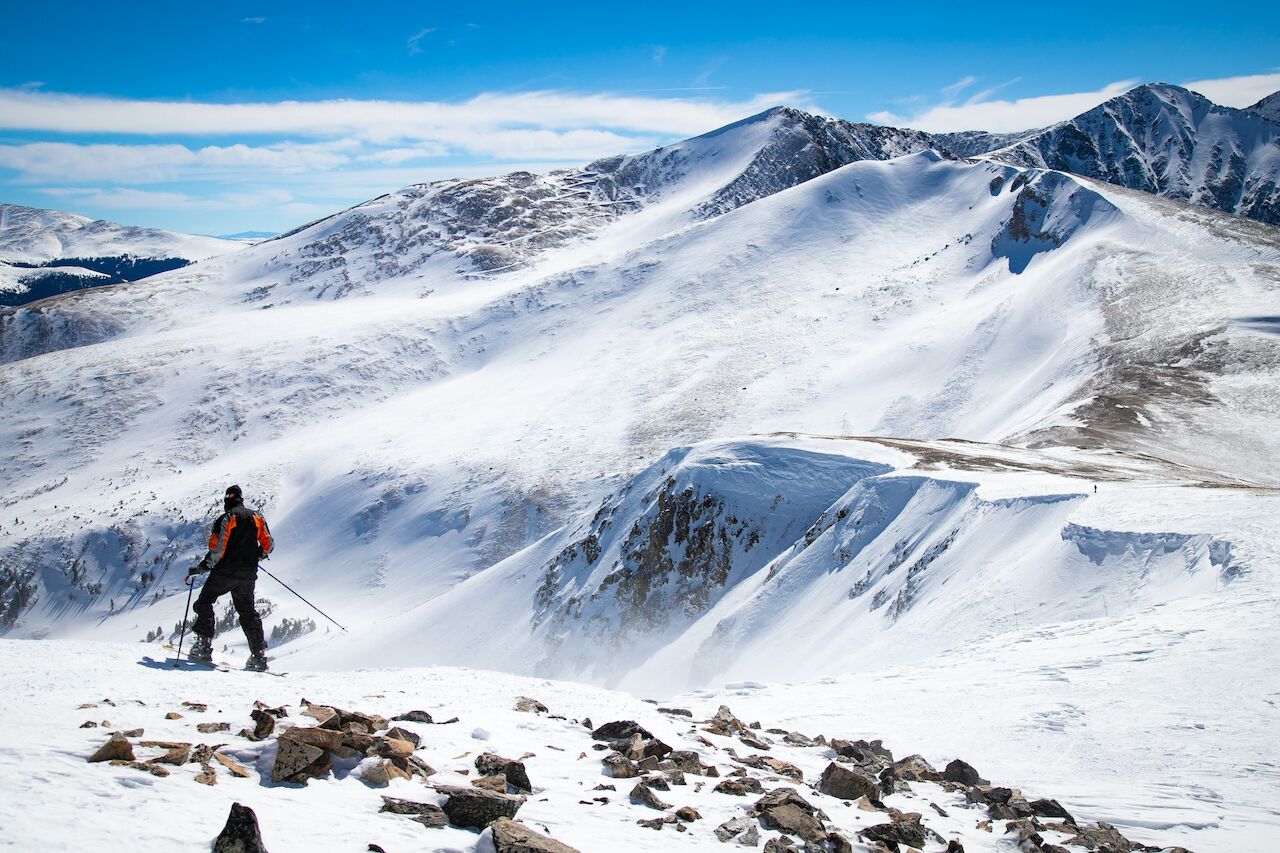 If you have a family of skiers or snowboarders, it shouldn’t take much convincing to head to Breckenridge for Christmas. Colorado is a paradise for winter sports enthusiasts, particularly skiers looking to escape the icy New England conditions for softer, more forgiving powder. There’s more to do here than the classic Colorado pastimes of skiing, snowboarding, snowshoeing, and snowmobiling, however.

The town of Breckenridge itself is perfect for a small-town Christmas feel with the energy and activities of a much larger destination. Downtown is full of art galleries, cafes, boutiques, and live music venues all infused with the vibes of a historic mountain town. Kids will enjoy boutique shops like Magical Scraps and Cowboys and Daisies, while you can look forward to spending your nights at the rustic Breckenridge Distillery (the world’s highest distillery) or Apres Handcrafted Libations.

To really get in the Christmas spirit, though, you can’t pass up a horse drawn sleigh ride. There are several options available, including scenic rides through the mountains with complimentary wine, and dinner sleigh rides that include a three-course meal in the backcountry combined with musical entertainment. 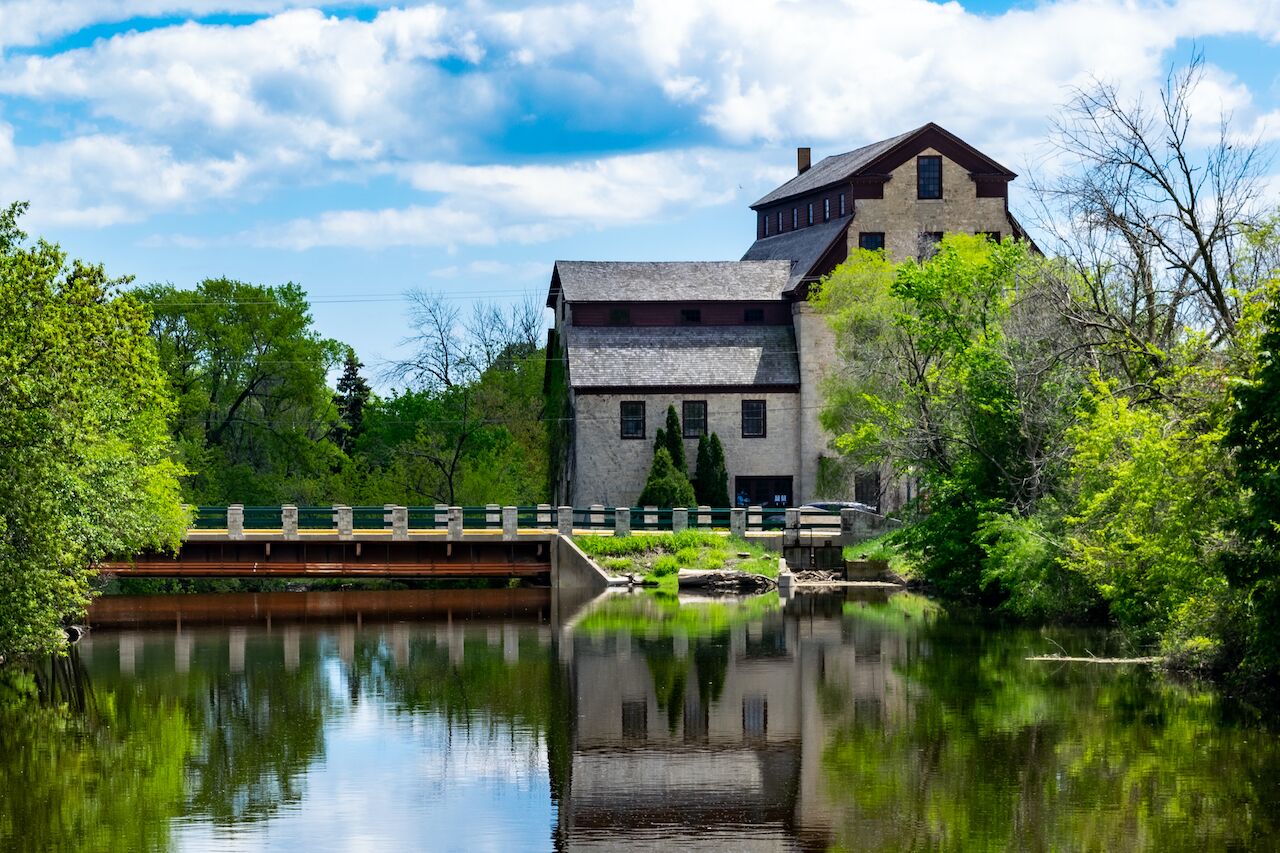 Snow certainly isn’t in short supply in Wisconsin in the winter. Located in one of the coldest regions of the country, Cedarburg, Wisconsin is ideal for a white Christmas getaway — and not just because of the weather.

Cedarburg’s downtown looks like the face of a winter postcard. Listed on the National Register of Historic Places, Cedarburg is filled with boutique shops, galleries, and restaurants occupying the 19th century buildings. The holiday season is anchored by the town’s annual A Cedarburg Christmas event, in which downtown is decorated with garland and ribbons. Among the special events hosted in town are Festive Friday Eves throughout December, when the Shops of Cedar Creek Settlement –historic shops and restaurants along the Washington Avenue Historic District — are open until 9pm, with live music, wine tasting, cider, and kid-friendly activities. There’s also a Santa’s Workshop, Mrs. Claus Raffle, Santa’s Dash Away 5k, and free trolley rides through downtown.

If you don’t mind braving the cold, there are a number of cross country ski and snowshoeing trails around Cedarburg, especially at the Riveredge Nature Center and Zeunert Park Path. There’s also ice skating at Cedar Creek Park. 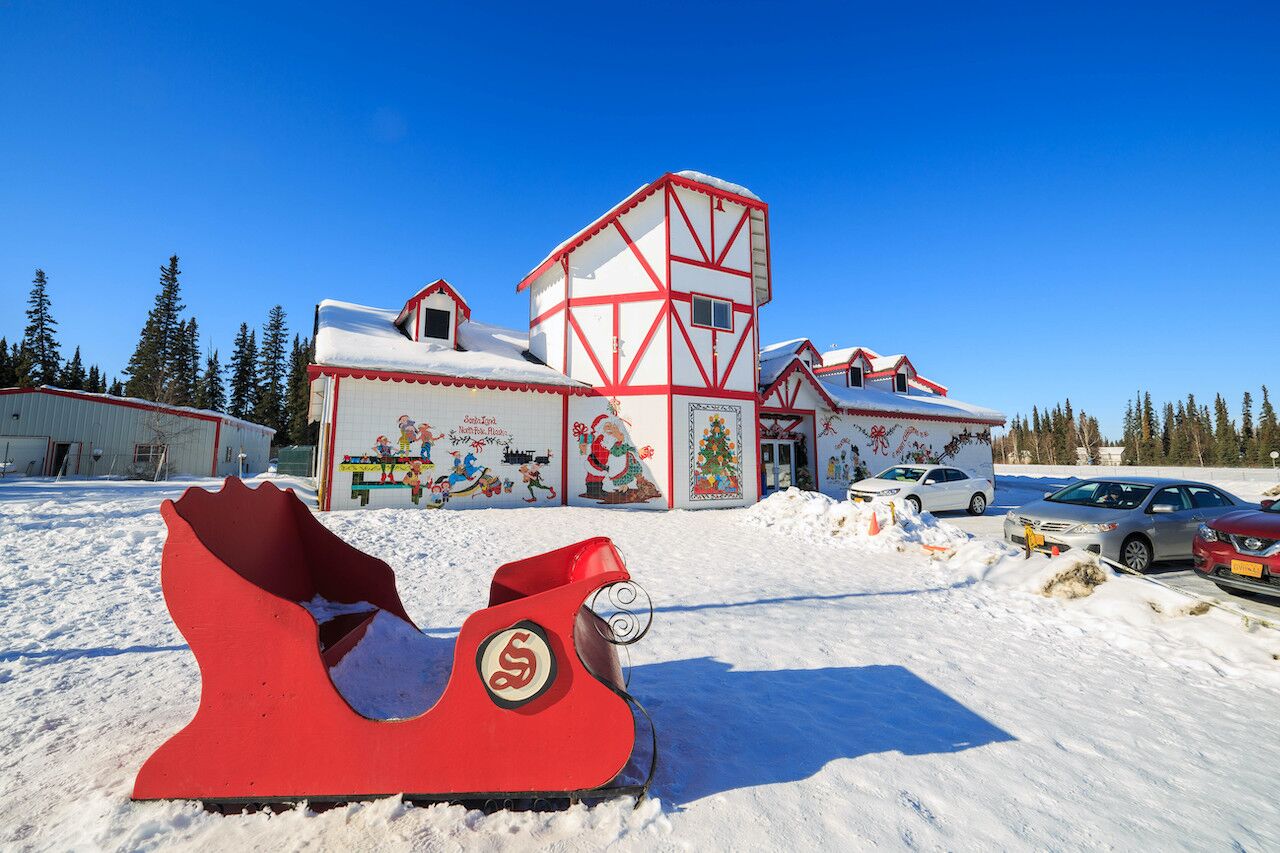 When people ask where you spent Christmas, wouldn’t it be cool to answer, “North Pole.” While it might not be the North Pole, this small town in Alaska will still elicit the desired perplexed and (hopefully) impressed expressions from your friends.

North Pole, Alaska is just 15 minutes from Fairbanks, and according to the town’s motto, “It’s Christmas every day.” The name of the town dates back to 1952, and was an attempt to lure a toy company to build a factory in the area. That never happened, but a city council member inspired by the name did open a trading post called Santa Claus House, and the Christmas aesthetic has remained and evolved there ever since. The roads are decorated year-round with candy canes and red-and-white-striped light poles, streets have names like St. Nicholas Drive and Snowman Lane, and the town is home to Christmas-themed ice sculptures in the winter months. The Santa Claus House is perhaps the biggest attraction, a huge gift shop featuring a 40-foot fiberglass statue of Santa right outside.

North Pole is a small town of just under 3,000 residents, but there’s plenty to do in the greater Fairbanks area. Rod’s Alaskan Guide Service in North Pole offers dog sledding and snowmobiling excursions, and the relaxing Chena Hot Springs are just an hour away. 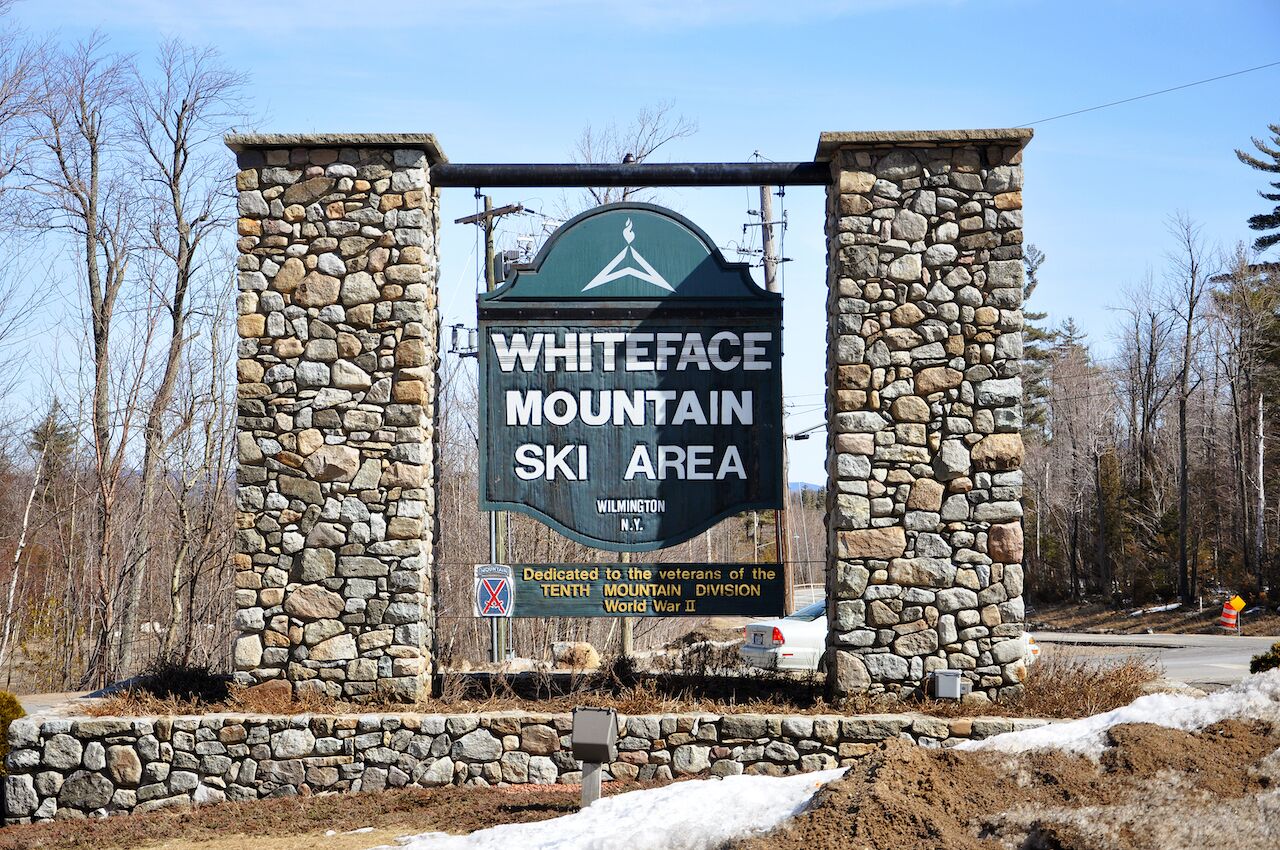 Lake Placid receives an average of 23 inches of snow throughout December, so your odds of a white Christmas here are pretty high. Surrounded by a peaceful forest, Lake Placid is perfect for exploring via cross-country skiing or snowshoeing, going ice skating, or simply renting a cozy cabin and enjoying the nature views. There’s also the Holiday Village Stroll, a December tradition with a tree lighting ceremony, Santa’s fire truck parade, scavenger hunt, and craft events.

As the home of the 1980 Winter Olympics, Lake Placid still retains some of the infrastructure used during the games, now repurposed for modern use. You can go ice skating at the Olympic Skating Oval, check out freestyle ski jumping competitions at the Olympic Ski Jumping Complex, go on a bobsled ride, or take the Olympic Gondola to the top of Little Whiteface mountain for views of the Adirondack High Peaks. You can also check out the Olympic Center and Museum, where the epic “Miracle on Ice” took place.

If you’d rather partake in extreme winter sports than revel in sports history, Whiteface Mountain will keep you plenty busy during your trip. At 3,430 feet,the mountain has the longest vertical drop of any east coast mountain, but there are also smaller beginner slopes for children. 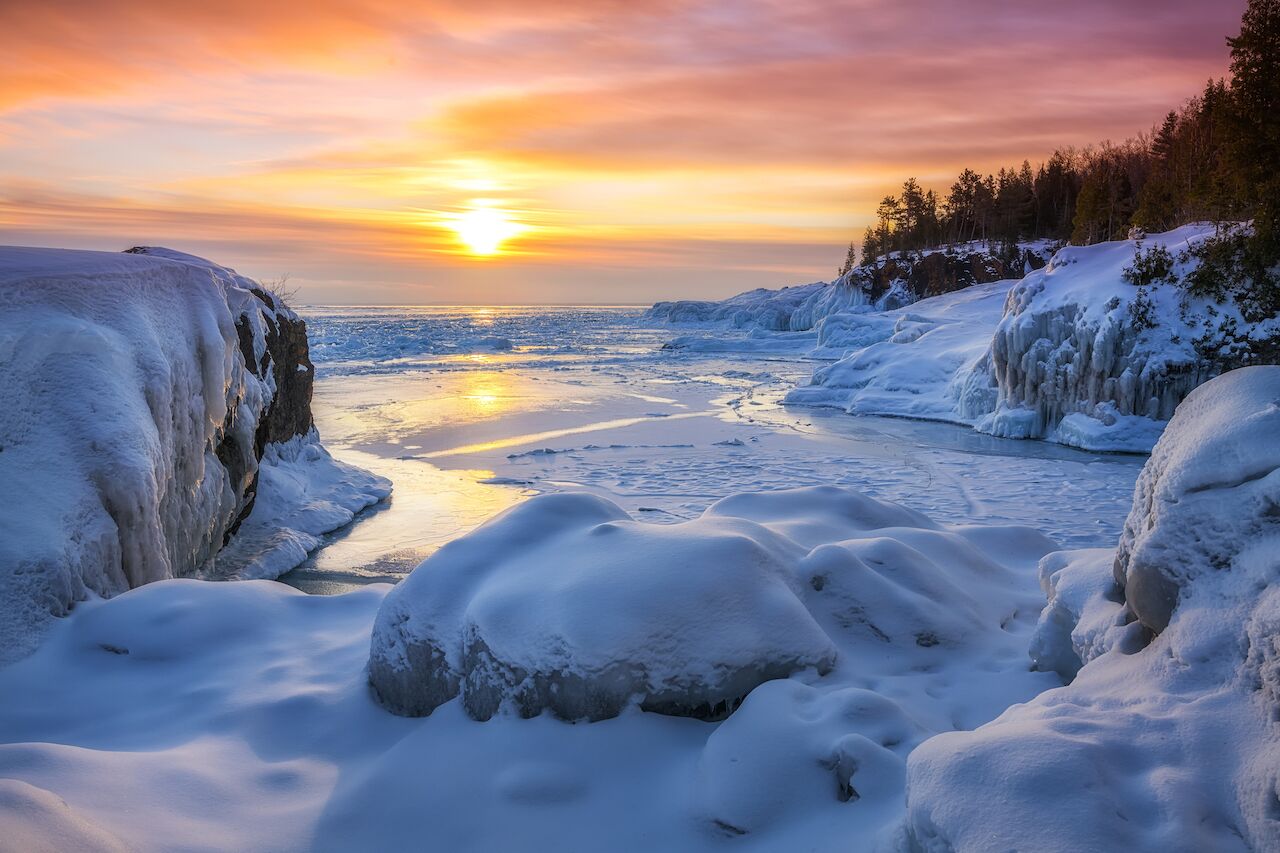 Marquette is one of the snowiest cities in the country, with an annual average of 155 inches of snowfall. Beyond the sheer volume of snow, Marquette is also home to frozen waterfalls, ice caves, snowshoe trails, and even Northern Lights views.

Sleighman’s horse-drawn sleigh rides is a magical winter experience that allows you to glide through the forest by sleigh. They offer private sleigh rides with Norwegian Fjord Horses for up to six people, or for a truly unconventional Christmas, a private sleigh party for up to 50 people including a bonfire, toboggan hill, and a warm building to enjoy a potluck dinner.

The Eben Ice Caves are also not to be missed. The caves are located on a tributary of the Rock River, where melting snow freezes as it falls off a cliff. Sunlight gives the ice a blue hue, which is truly magical as you enter the caves for the first time. If you’d rather climb the ice rather than explore underneath it, Pictured Rocks National Lakeshore has several ice climbing routes where you can break out your gear for some rugged ice climbing.

December is also a time for Marquette’s annual holiday celebrations. The Winter Snow Fun Holiday Parade & Annual Tree Lighting begins with floats, decorated trucks, and carolers making their way down Third Street, and ends with a tree lighting ceremony with Santa Claus. The Marquette Post Office also sends out helper elves to collect children’s letters to Santa along the parade route, and there are pony rides, hot chocolate, and Santa photos available for children too. 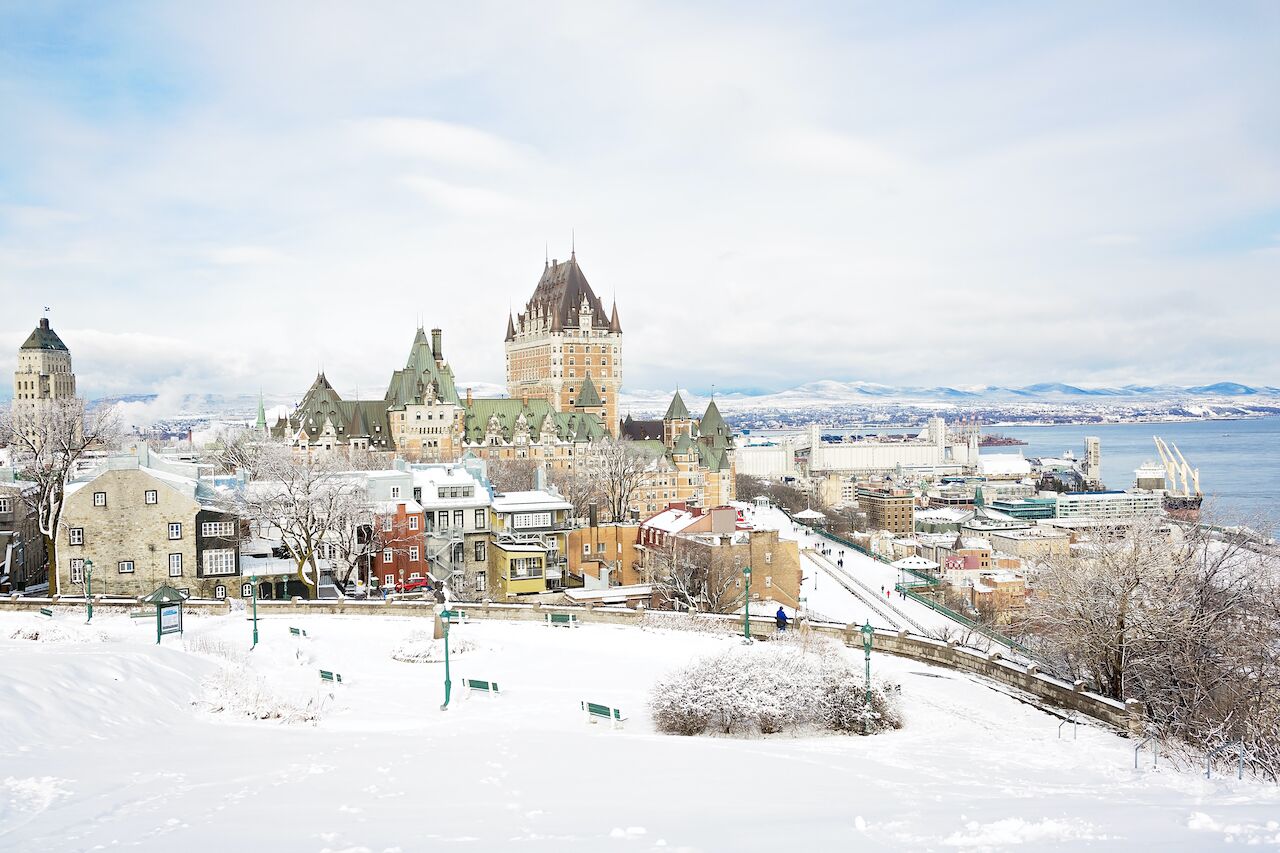 Make no mistake — Quebec City in the wintertime is cold. But if you don’t mind layering up, braving the temperature is totally worth it. The truly intrepid might consider staying at the Hotel de Glace, an ice hotel just outside the city built entirely of ice. The hotel is rebuilt each year with a different theme, has dozens of rooms featuring ice carvings and neon lights, and might just be the perfect place to spend an unforgettable family Christmas.

To really dive into the city’s European vibe, check out Vieux-Quebec, the historic and picturesque old neighborhood of the city. The Petit-Champlain district in particular is known for its winding cobbled streets, and is lined with cafes, restaurants, and boutique shops selling maple syrup and ice wine. You might be just two hours from the US border, but it will truly feel like you’re celebrating Christmas in 18th century France.

If you’re craving an afternoon’s escape from the city, head an hour north to Mont-Saine-Anne for a little ski getaway. There’s also Stoneham Mountain Resort just a half-hour away, which is Canada’s largest night skiing area. And once you’ve returned from the slopes you can hit up Strøm Spa, with several heated outdoor pools overlooking the St. Lawrence River.

Holidays9 of the Most Beautiful Christmas Trees From Around the World
Tagged
Holidays Travel
What did you think of this story?
Meh
Good
Awesome