Belfast’s diverse artistic and cultural offerings reflect its rich history. The city’s mixture of architectural styles point back to its Victorian roots and its past role as a commercial and industrial hub in the early 20th century. Belfast is also unafraid of confronting its demons, with many poignant reflections on the years of conflict; however, it is also a city looking toward the future, as reflected by its vibrant young arts scene. 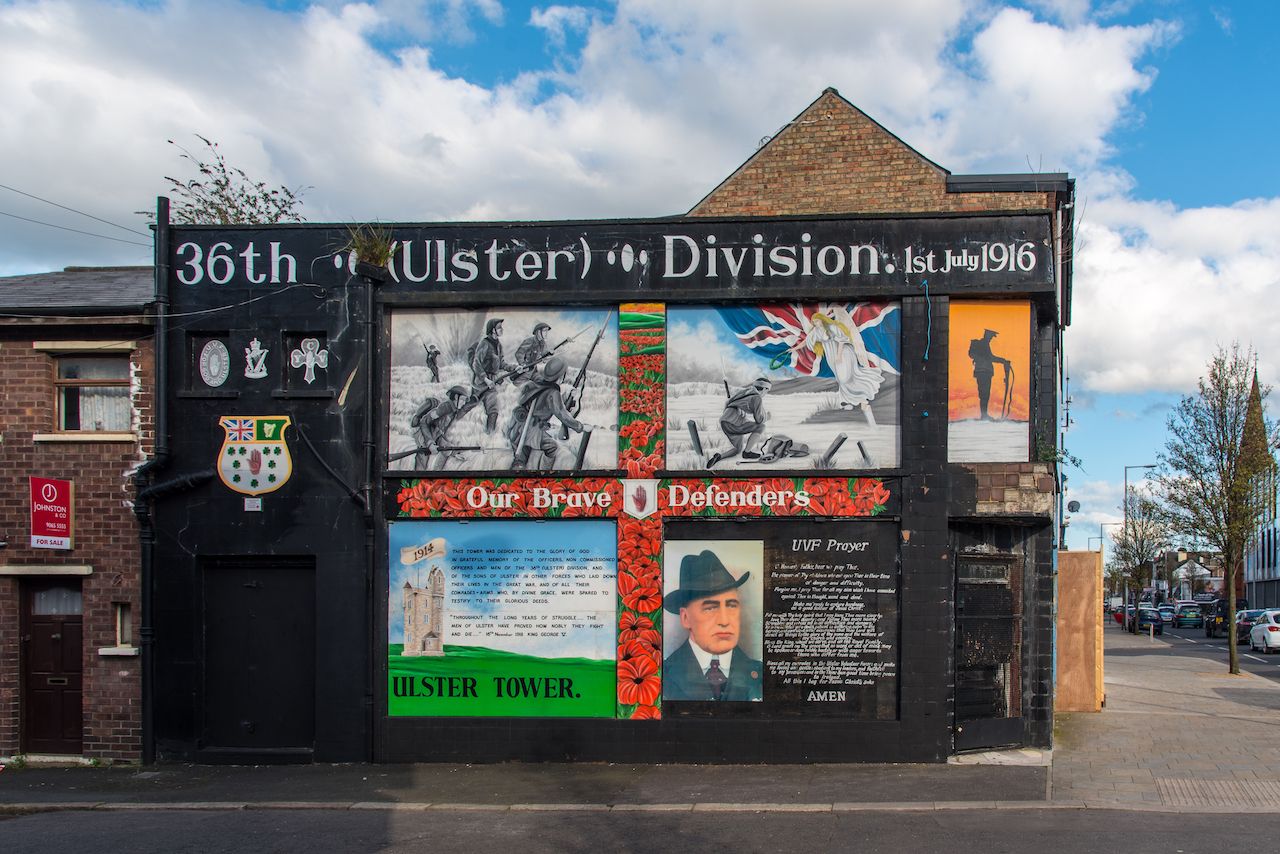 Falls and Shankill Road murals — Belfast’s murals are undoubtedly its most famous artistic output. Throughout the years of conflict, artists on the Nationalist Falls Road and Unionist Shankill Road painted distinctive political artworks on the gables of houses and local businesses. These frequently depicted violent scenes, and some visitors may be shocked by the remaining aggressive imagery. Since 1998, however, a concerted effort has been made to make the murals more reflective of peace-time Belfast. Highlights include tributes to local heroes including George Best, as well as a recreation of Picasso’s “Guernica” as a memorial to innocent victims of combat all over the world. Walking and driving tours are available, but the area can also be explored safely on foot by yourself. This unofficial map outlines the location of many of the most popular murals. 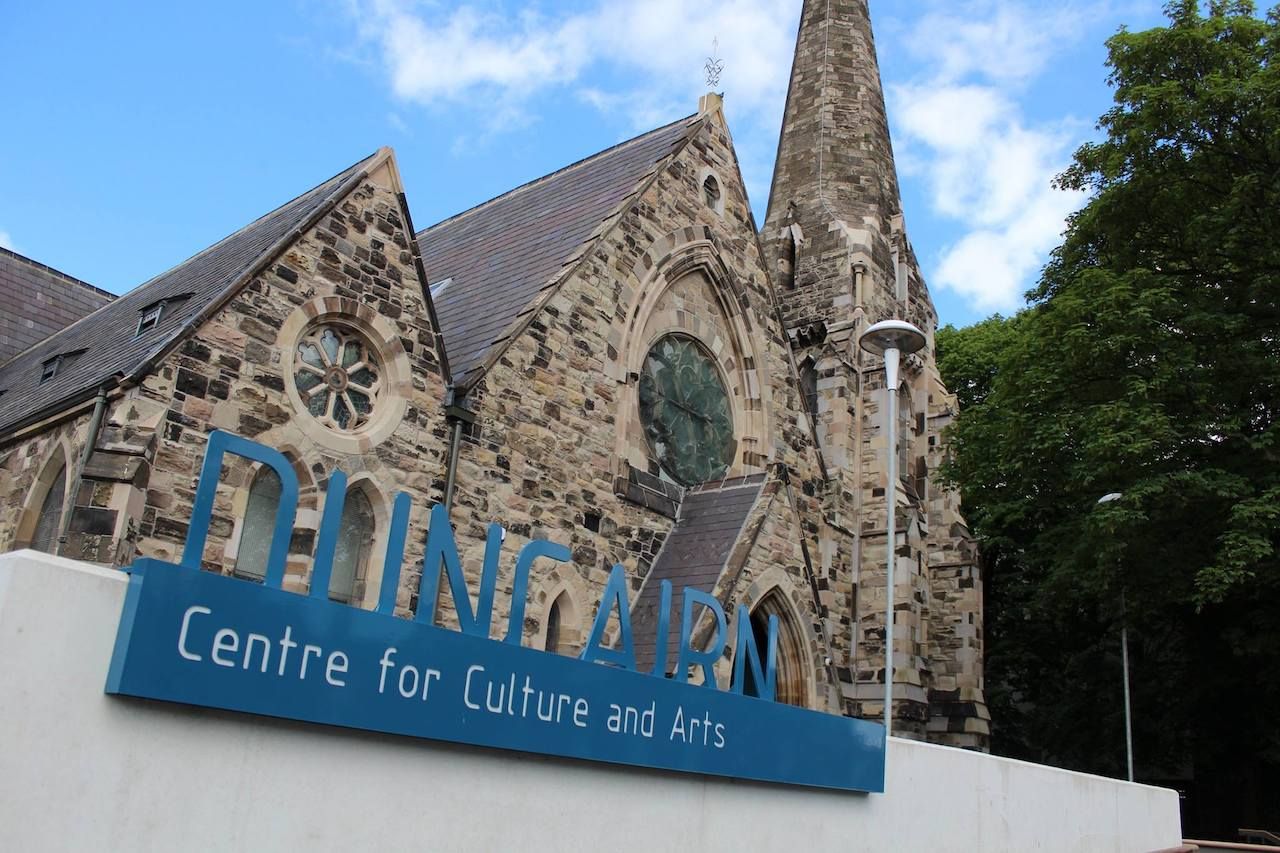 The Duncairn — The Duncairn arts center has occupied a disused Victorian church since 2014. Situated in the traditionally working-class northern part of the city, its mission is to strengthen ties within the local community by providing a shared artistic and cultural hub. In particular, it offers classes, workshops, and affordable performances for disadvantaged residents. This is significant, as North Belfast has also historically been mixed in terms of Catholics and Protestants. Its centerpiece is a cavernous concert venue in the old chapel which plays host to both up-and-coming and established artists. Periodically, the Duncairn also holds exhibitions of local visual artists. 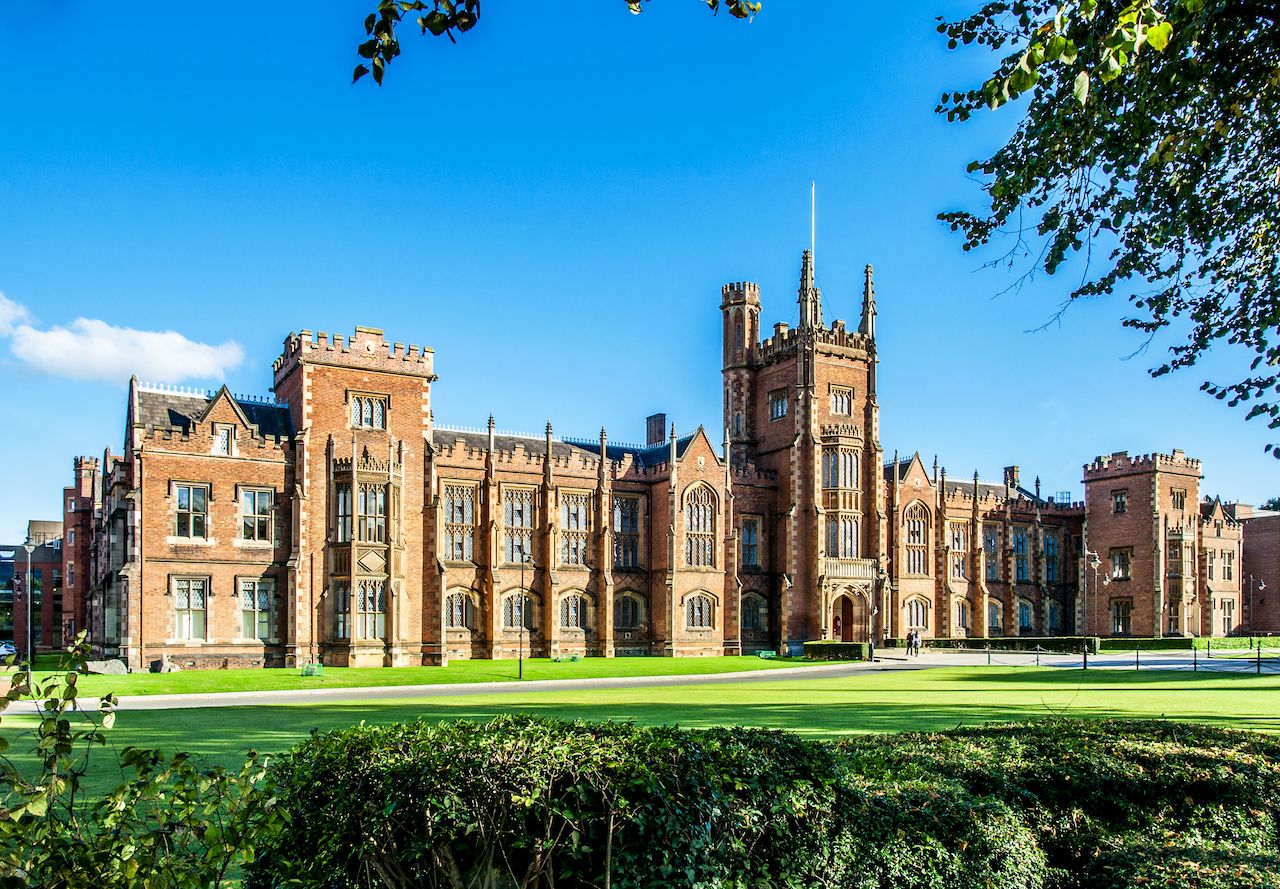 The Lanyon Building — Although an Englishman by birth, Charles Lanyon left the greatest stamp on Belfast of any architect. Completed in 1849, his eponymous masterpiece is the main building of Queen’s University. With its late-Gothic facade and intricate towers, the Lanyon Building frequently draws comparisons to Hogwarts. Behind this grand exterior, there is a grassy quad, where, in the spring, you’ll find students eating lunch between classes. Visitors should also pop their heads into the Great Hall to get a feel for the pomp and circumstance of Victorian university life. The entrance hall of the Lanyon Building is also home to the university’s main souvenir shop and bookstore.

Oh Yeah Music Centre — Belfast has always punched above its weight in terms of producing world-class musical talent. The Oh Yeah Centre was founded in 2007 to facilitate the next generation of musicians and industry professionals. Housed in a one-time whiskey distillery, it provides classes, practicing facilities, and mentoring for musicians and music lovers both young and old. As well as concerts, it also holds regular talks and seminars, while a permanent exhibition on the ground floor displays artifacts from some of Belfast’s most famous sons and daughters, including Van Morrison and Gary Moore. Once a month, the Oh Yeah Centre hosts a guided bus tour throughout Belfast, which takes visitors to some of the sites that have been part of Belfast’s musical story over the last 50 years. 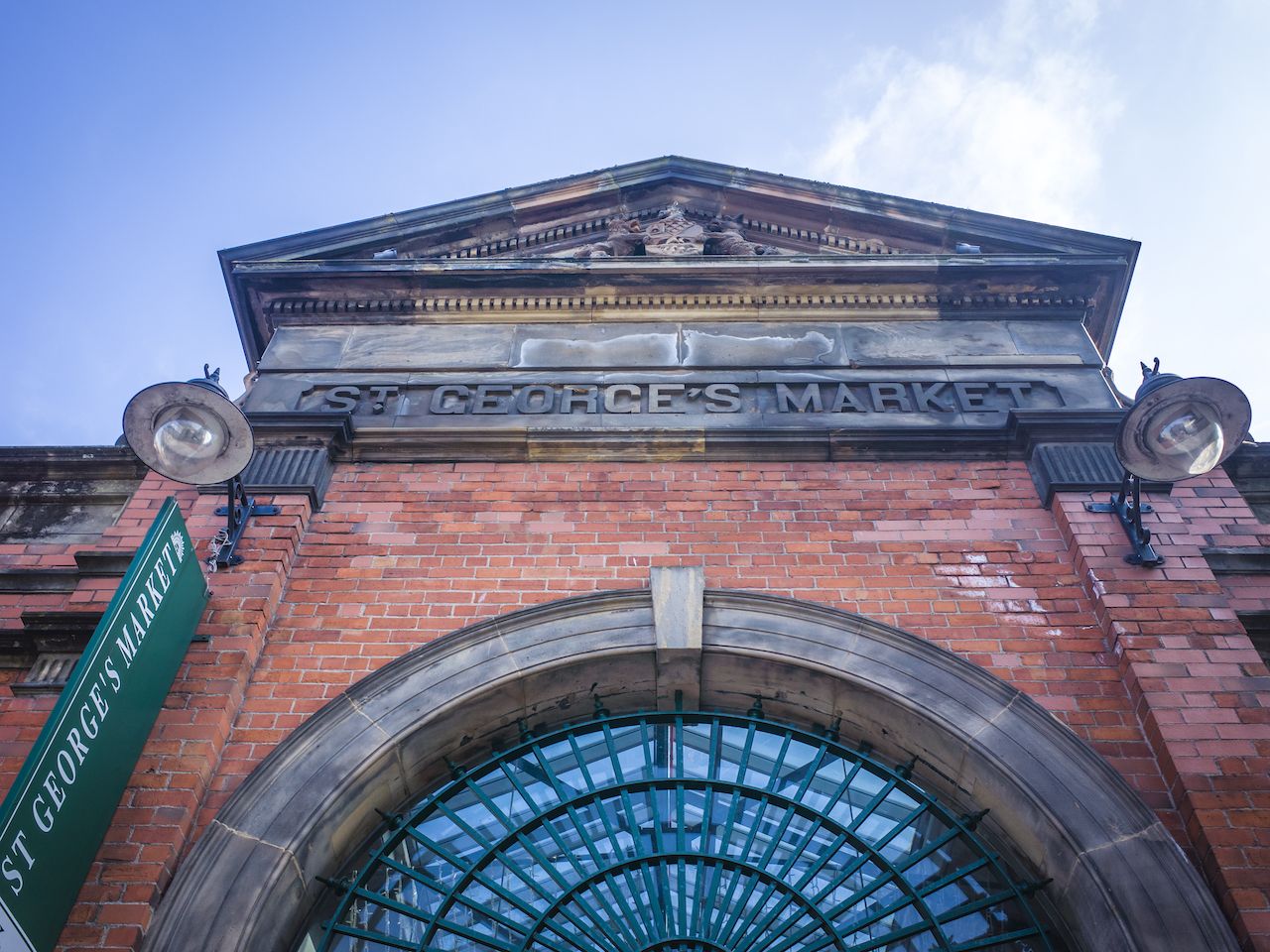 St George’s Market — St George’s Market is Belfast’s last surviving Victorian covered market. Open Friday, Saturday, and Sunday mornings, it has retained much of its character as a traditional food and grocery market for the locals. While these people are well catered for at one end of the market hall, at the other end, visitors will find local craftspeople and artists selling their wares. The central area of the market, meanwhile, offers more artisanal food and drink, with Northern Irish and international cuisines being sold from adjacent stalls. The many antiques, books, and record stalls also deserve a special mention. Those wishing to bring back souvenirs from their time in Belfast are well catered to in St George’s, too. Tote bags and T-shirts adorned with local sayings and wisdom are particular favorites. 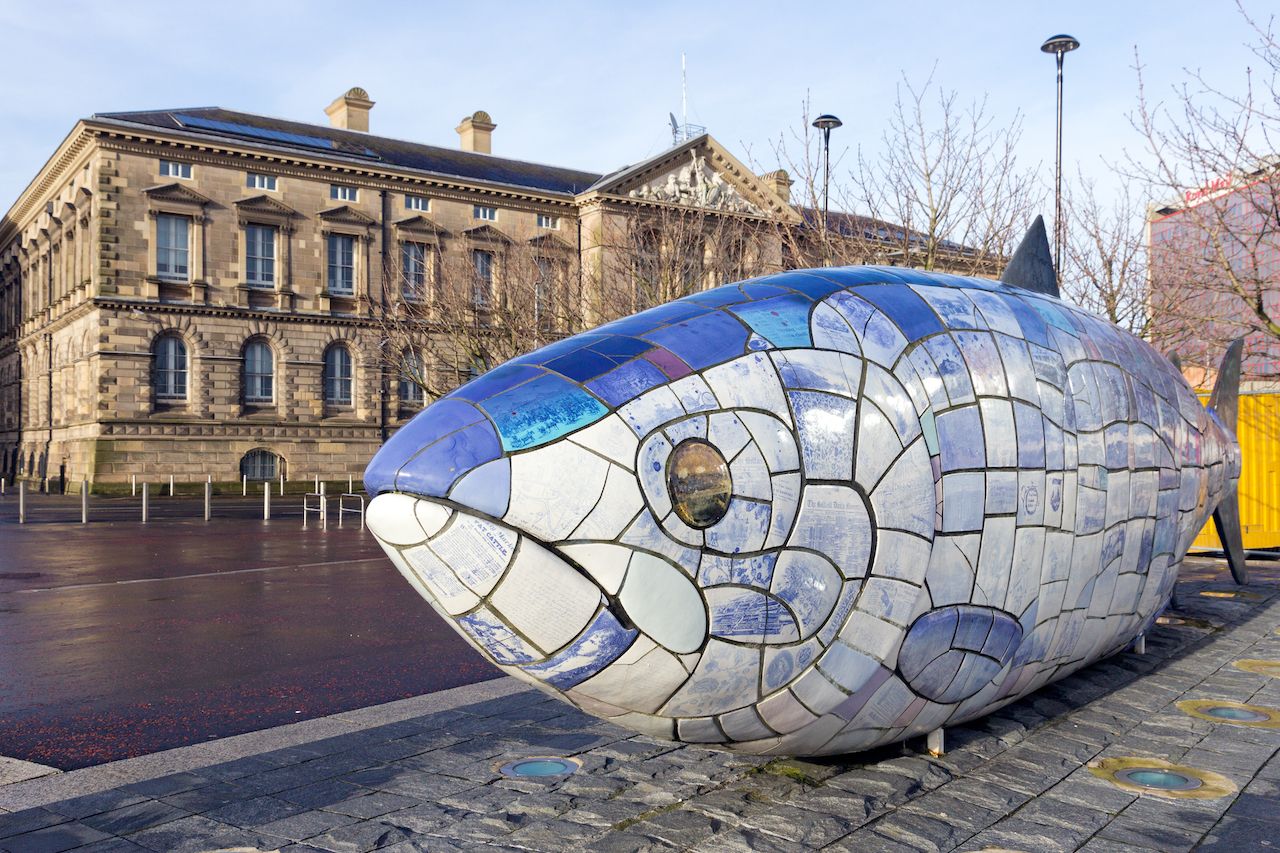 The Big Fish — Belfast natives have a habit of giving tongue-in-cheek nicknames to public artworks. Indeed, this mosaic sculpture is officially known as the “Salmon of Knowledge,” after the local folk tale. The story goes that Fionn mac Cumhaill, Ireland’s mythical hero, once ate a salmon which instilled in him all of the knowledge in the world. These days, tourists get photos taken kissing the Big Fish’s lips. Few report a marked increase in intelligence afterward though. In any case, on a warm day the Big Fish is a pleasant spot to grab a coffee from one of the nearby vendors, sit by the River Lagan, and relax. 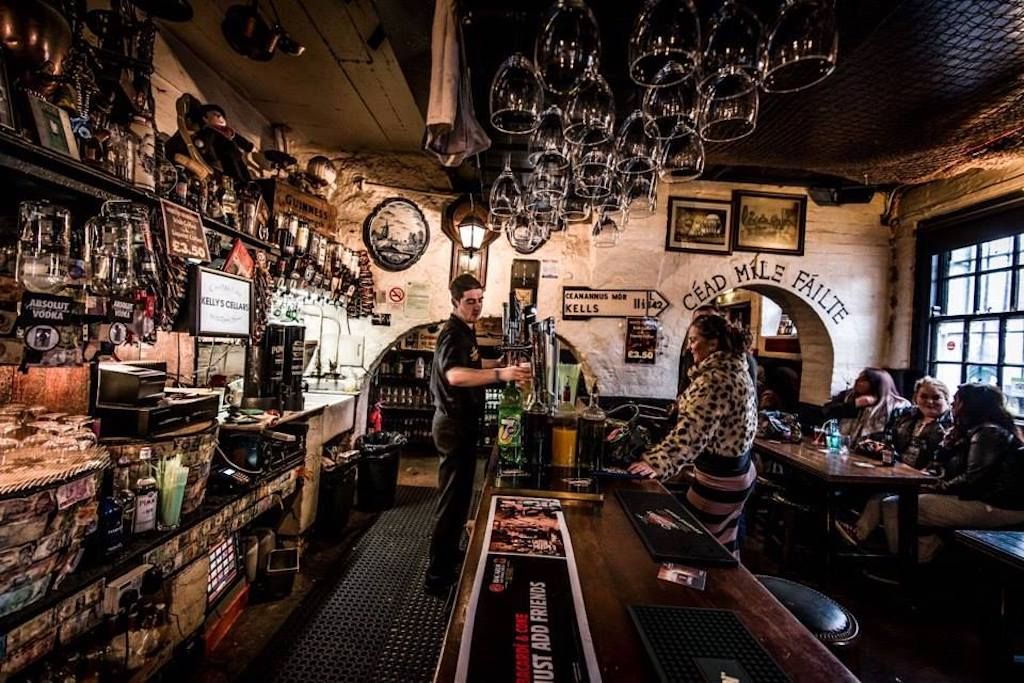 Kelly’s Cellars — Kelly’s Cellars, or “Kelly’s” for short, is Belfast’s oldest pub. It dates all the way back to the 18th century, with low doors and a waist-height bar — people were smaller in those days. There’s a plaque on the white stone exterior to commemorate the Society of United Irishmen, who used Kelly’s as a meeting place before the 1798 rebellion. Inside, there are photos of more recent visitors, including the Dubliners and Leonard Cohen. Possibly the most authentic Irish pub in the world, Kelly’s is a hive of traditional music. Musicians gather almost every night of the week to sit in the corner, drink pints of stout, and blast out jigs and reels until the late hours.

Belfast Exposed — Behind an unassuming shop front on Donegal Street is Belfast Exposed, Northern Ireland’s premier photography gallery. It was originally founded in the early 1980s to document the conflict, and highlighting the shared experiences of ordinary people from the different communities. Belfast Exposed continues to exhibit photographic works with an ethos of social engagement. It seeks to display works which respond to political issues of the day, both locally and internationally. In keeping with this, exhibitions at Belfast Exposed are often accompanied by talks, lectures, and community events. Entry to the galleries is free of charge, and visitors are also welcome to browse Belfast Exposed’s extensive archives. 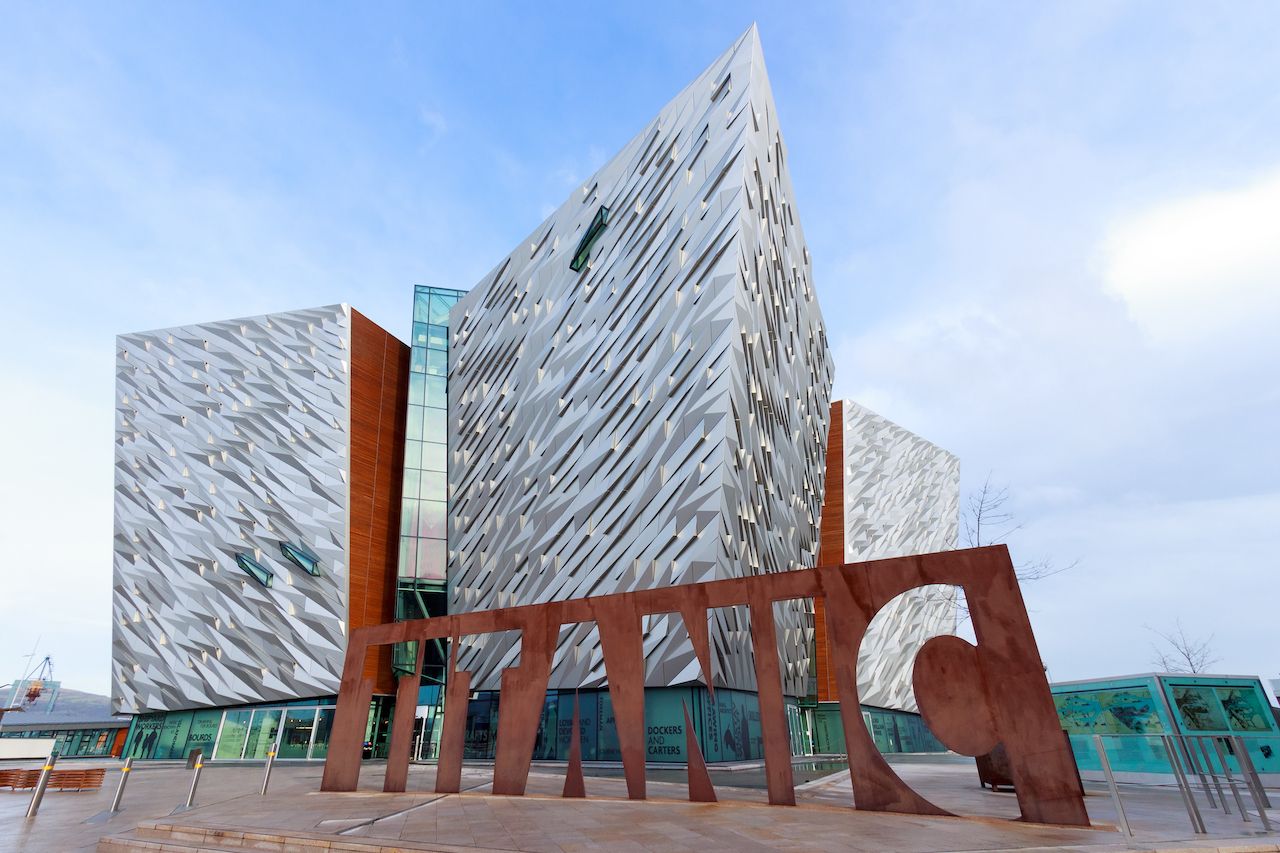 Titanic Belfast — Since 2012, the cornerstone of any Belfast trip has been the Titanic museum. Rightly so, as in 2016, it had the honor of being named the world’s most popular tourist attraction at the World Travel Awards. A vast shiplike structure built on the slipway, which named the luxury liner itself, Titanic Belfast tells the story of the world’s most famous ship in an engaging multimedia format. Highlights include a ride through the building process of the ship, recreations of the different cabins aboard the ship, as well as the grand staircase made famous by the 1997 movie. A big focus of the museum is on the amazing construction of the ship and all its glamorous features — less so on its tragic fate — but the final floors do offer a sobering look into the ship’s final moments at sea, along with findings from the undersea wreckage. In the surrounding area, guests can also find tributes to the thousands of Belfast shipyard workers who built the Titanic and similar ships over the centuries. In the summer months, the slipway hosts outdoor concerts.