Owing to extensive redevelopment throughout the 2000s and 2010s, Belfast has become a major tourist destination on the global stage. As a result, countless new hotels and guest houses have emerged to fill this new demand for accommodation. While this has meant an influx of the usual large chains, you’ll find just as many local, independent accommodations. The need to stand out in a crowded market has led some hoteliers to create truly unique spaces. Many of these reflect Belfast’s rich cultural heritage in luxuriant style. 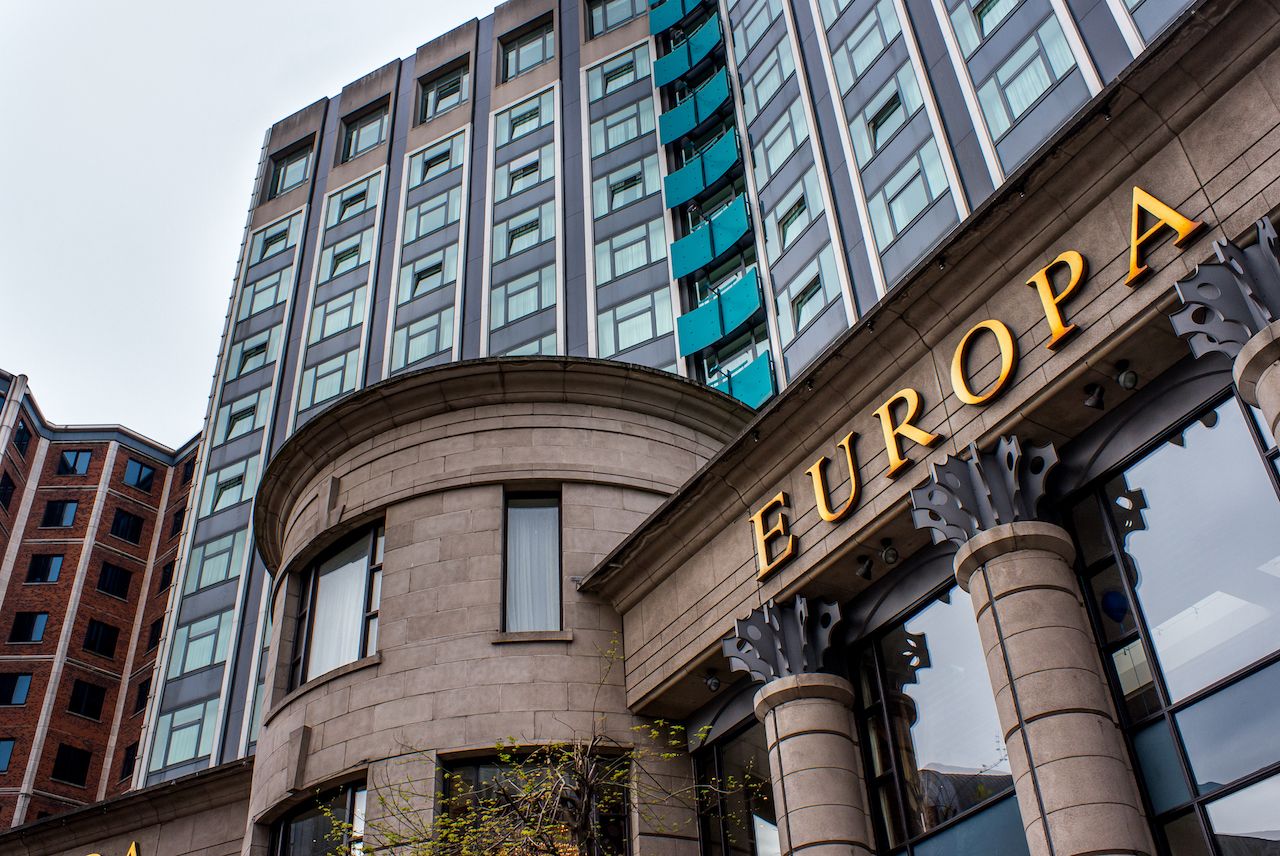 The Europa Hotel — Far from being just a hotel, the Europa is also one of Belfast’s top tourist destinations in its own right. Unfortunately, its claim to fame is that it was the world’s most bombed hotel throughout the ‘80s and ‘90s. Its neoclassical base gives way to a modernist tower of glass and steel in the center of the city. The Europa’s piano lounge offers a place to relax in classic style, serving both afternoon tea and an extensive range of cocktails.

House — Since 2018, House has been offering accommodation in Belfast’s trendy Queen’s Quarter. It’s also probably the city’s most photogenic hotel. Its centerpiece is a giant cherry blossom tree, which stands in the main lobby and bar area. The rooms, meanwhile, are an eclectic mix of Art Deco and floral patterns, with modern appointments including granite-clad bathrooms. That’s not to say that House is style over substance though. For a small building, House also punches well above its weight with amenities including a dedicated whiskey bar and an extensive menu of traditional favorites. 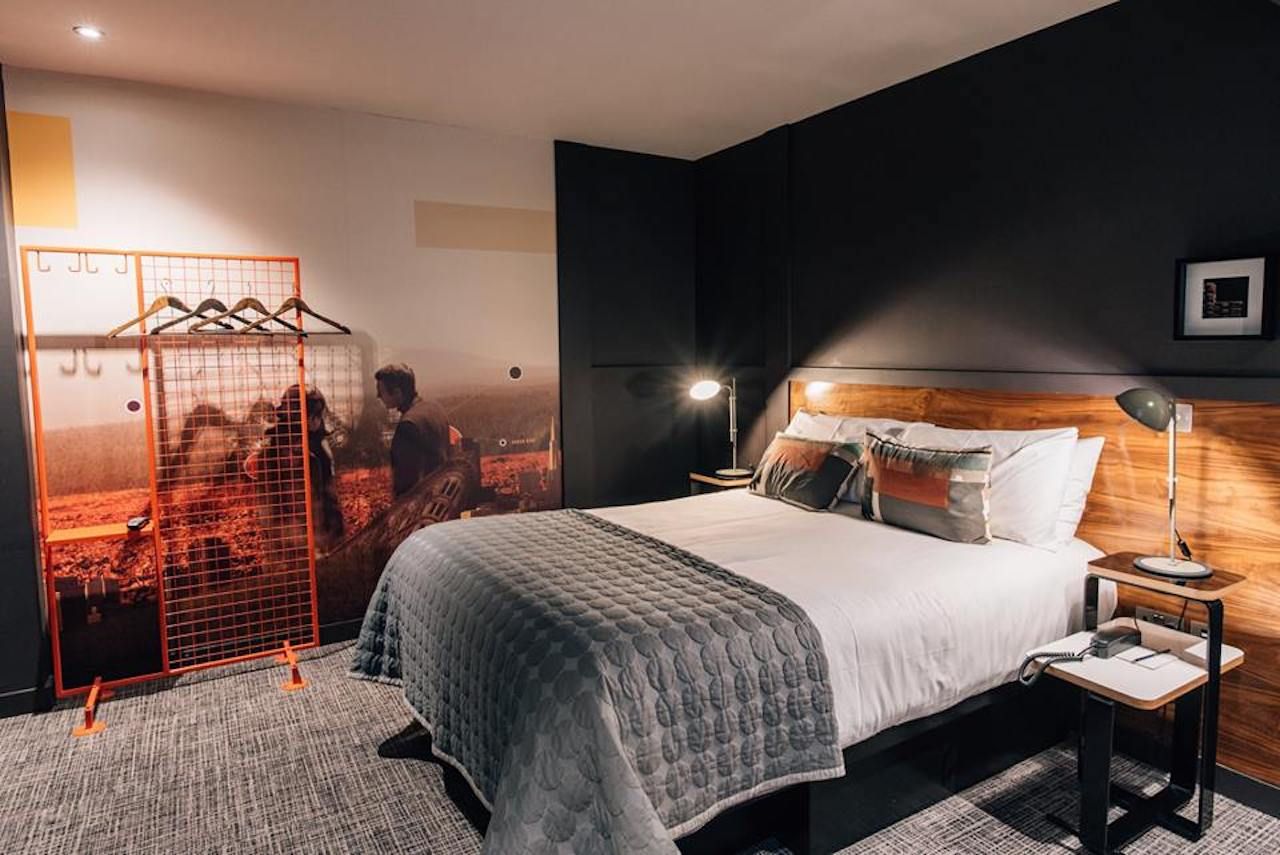 Bullitt — Bullitt had many locals feeling slightly baffled when it first opened. Named after the Steve McQueen movie of the same name, its interior puts a modern twist on a ‘70s American aesthetic. Their rooms are sorted into three self-explanatory groupings, “Dinky,” “Comfy,” and “Roomy,” each of which offers no-frills comfort. Bullitt could scarcely be more centrally located, standing on the boundary between Belfast’s main shopping area and the Cathedral Quarter. Guests can look down on the shoppers below from the comfort of the rooftop cocktail bar. If you’re afraid of heights, there’s also a spacious beer garden on the ground floor.

The Crescent Townhouse — The Crescent Townhouse has a quiet confidence to match its suburban Georgian exterior. It offers bright and affordable rooms a five-minute walk away from either the city center or Queen’s University. The adjoining Town SQ licensed cafe will be a particular highlight for visitors with decadent tastes. It’s home to bonafide champion baristas, as well as one of Belfast’s longest gin menus. In the summer months, guests can enjoy their morning coffee at the outside tables with a view of the adjacent crescent park. 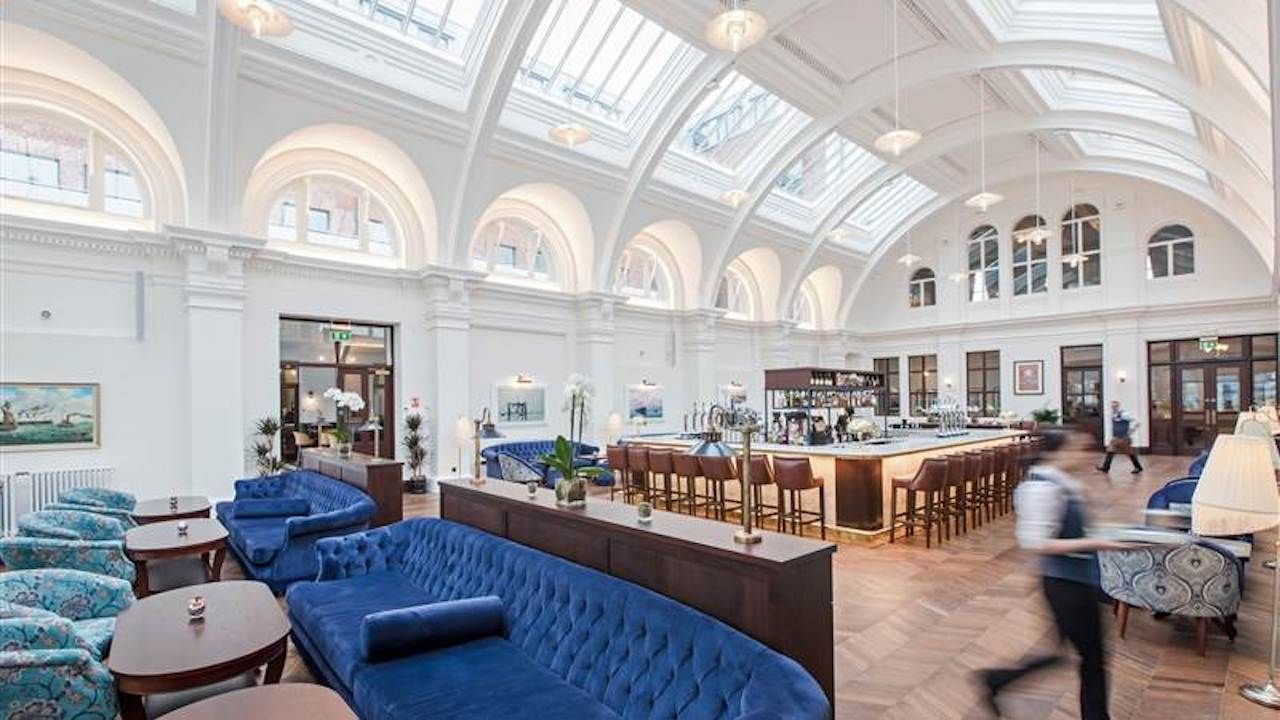 The Titanic Hotel — Housed in a shipyard building from the 1880s, the Titanic Hotel offers all the luxury of its namesake ocean liner. From its marble floors to the barrel-vaulted ceilings, The Titanic Hotel displays turn-of-the-century elegance throughout. That’s only fitting for a building that was once at the center of the busiest shipyard in the world. These days, it is adjacent to one of the world’s most popular tourist destinations, Titanic Belfast. The city center is 10 minutes away on foot or a short hop on the new Glider buses.

The Merchant — The Merchant is Belfast’s most iconic luxury hotel. It’s also the city’s only five-star offering. When the building was completed in the 1850s, it served as the headquarters for Ulster Bank. It oozes Victorian style and decadence, with everything you’d expect from this period, including grand furniture, marble floors, chandeliers, and a grand entrance hall. Don’t think this is your grandmother’s idea of a luxury getaway though. Indeed, the Merchant has kept up with the intervening centuries. Think rooftop jacuzzi. Think pool table in the old bank vault. 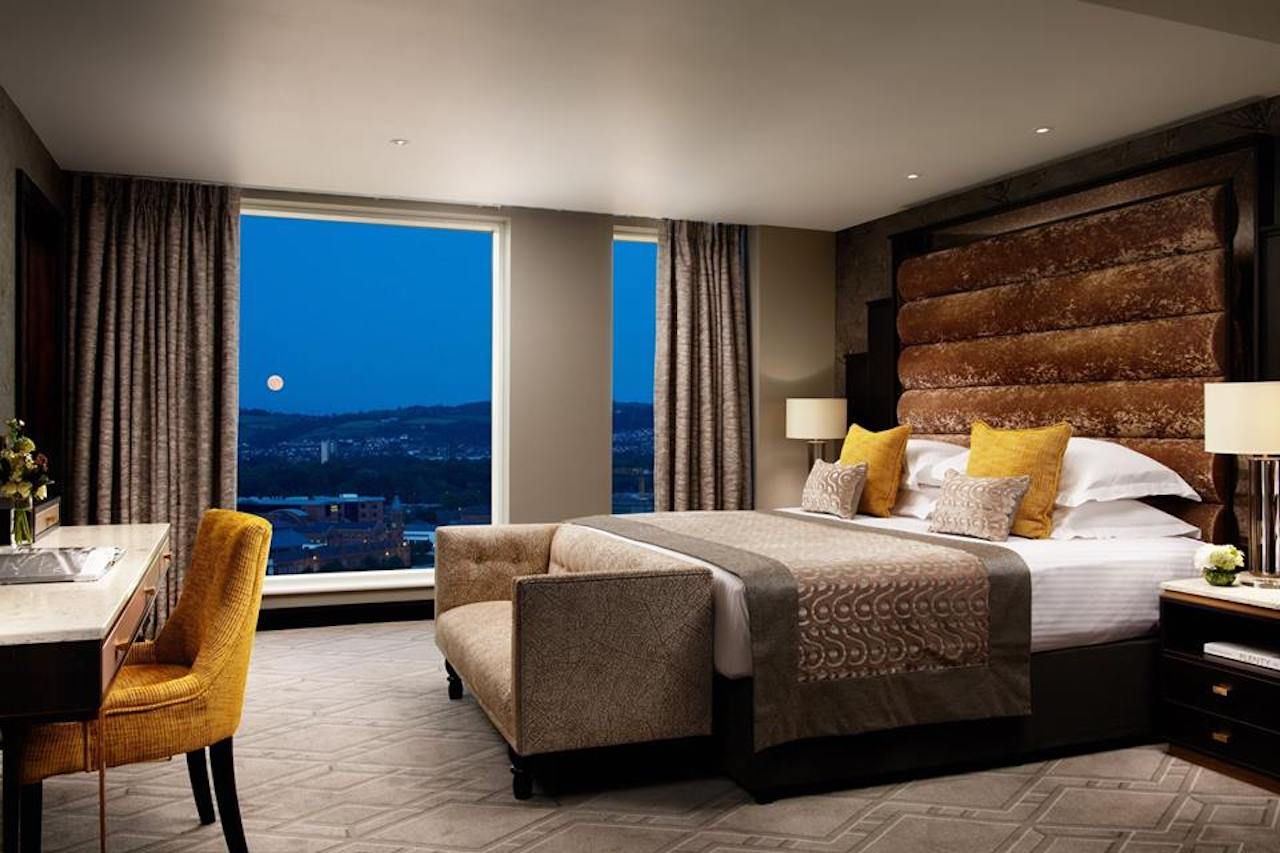 Grand Central Hotel — Grand Central is often mistaken for Belfast’s tallest building. Towering over everything around it on the south side of the City Hall, this is an understandable mistake. As well as offering stunning views from its rooms, this stature also reflects the heights of luxury on offer. When it opened, the Grand Central claimed to serve Northern Ireland’s most expensive pint of beer in its Observatory bar. Whether you want to splash out on this or order a cheaper tipple, you’ll want to enjoy it in front of the panoramic windows, which offer a 360-degree view of the city, Belfast Lough, and Black Mountain. Stunning. 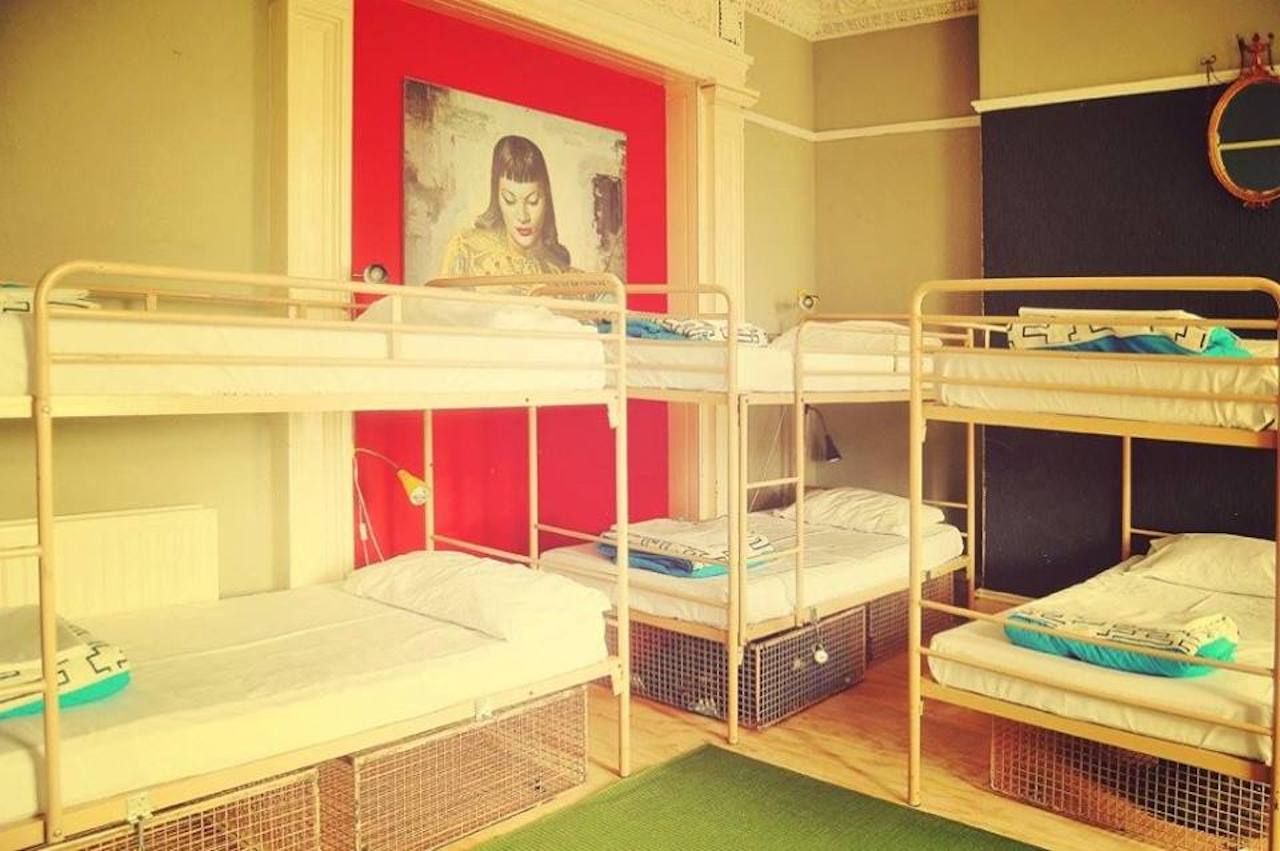 Vagabonds — Facing Queen’s University’s main campus, Vagabonds is the type of hostel most backpackers dream about. It all comes down to a personal touch. Like every great hostel, Vagabonds is owned and operated by experienced travelers. Indeed, owners Tara and Curt have a lot to be proud of, including being named the best hostel in the UK and Ireland in 2009 and the seventh best in the world in 2012. More luxurious appointments include a pool table, free linens, and a beer garden behind the building.

Lagan Backpackers — Named after the river that runs through Belfast, Lagan backpackers has plenty of life-giving qualities of its own. Many seasoned hostel-goers will have been disappointed in the past by exaggerated claims about free meals. It’s not uncommon to find that “free breakfast” means a loaf of bread in the common area. Not so at Lagan Backpackers! Guests receive a cooked breakfast every morning, along with free tea and coffee. In the evening, they can avail of a three-pound-sterling dinner, which changes daily. Lagan Backpackers is also centrally located just off Botanic Avenue in the Queen’s Quarter.

Paddy’s Palace — Paddy’s Palace is a familiar brand to many with six locations across the island of Ireland. As well as offering ultra-modern and comfortable accommodation, it’s famous for its tours. The company offers a coach trip to the Giant’s Causeway and back every day of the year except Christmas day. More locally, it’s also the licensed provider of Belfast’s famous black taxi tours. During these, guests are shown around important historical sites in the city, including the murals, by experienced local tour guides. All this from the comfort of a London-style black taxi.

Global Village — Global Village is perhaps Belfast’s most bohemian hostel, both in appearance and philosophy. Visitors will be impressed by the hand-painted wall art throughout the interior. This may come as a surprise compared to the Georgian townhouse exterior. The number of different common areas is impressive too, including the standard lounge and kitchen areas, as well as a games room and outdoor terrace. The terrace is also home to Global Village’s legendary barbeque, which thousands of travelers have enjoyed on summer evenings. 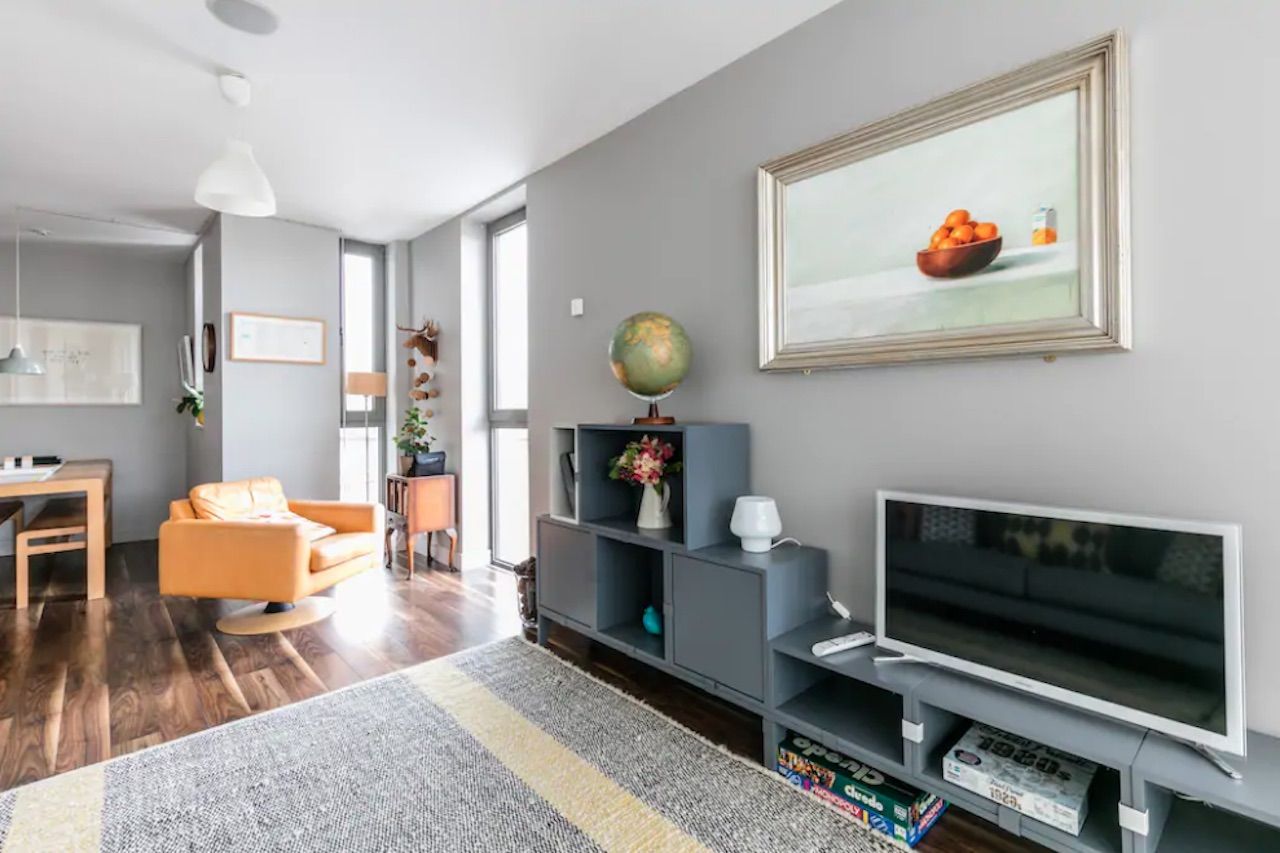 Luxury Titanic Quarter Apartment — A better location for an apartment in Belfast could scarcely be imagined. The corner balcony overlooks the moored SS Nomadic, with sights including Titanic Belfast and the mouth of the River Lagan in the background. This flat is far from just a pretty face though. For a quiet evening in, guests can also avail of the included Smart TV and Amazon Alexa home assistant. For infants that demand only the best, even the provided crib has a memory foam mattress.

City Centre House Boat — If you really want to experience Belfast’s maritime history, there’s no better option than staying on this barge. Moored in a small harbor on the eastern bank of the Lagan, just minutes from the city center, there’s a seafaring feel throughout, including a pleasing blue decor. Guests can enjoy a coffee or an outdoor breakfast on the rear deck. Alternatively, it’s hard to picture a better spot to enjoy a glass of wine while the sun sets. 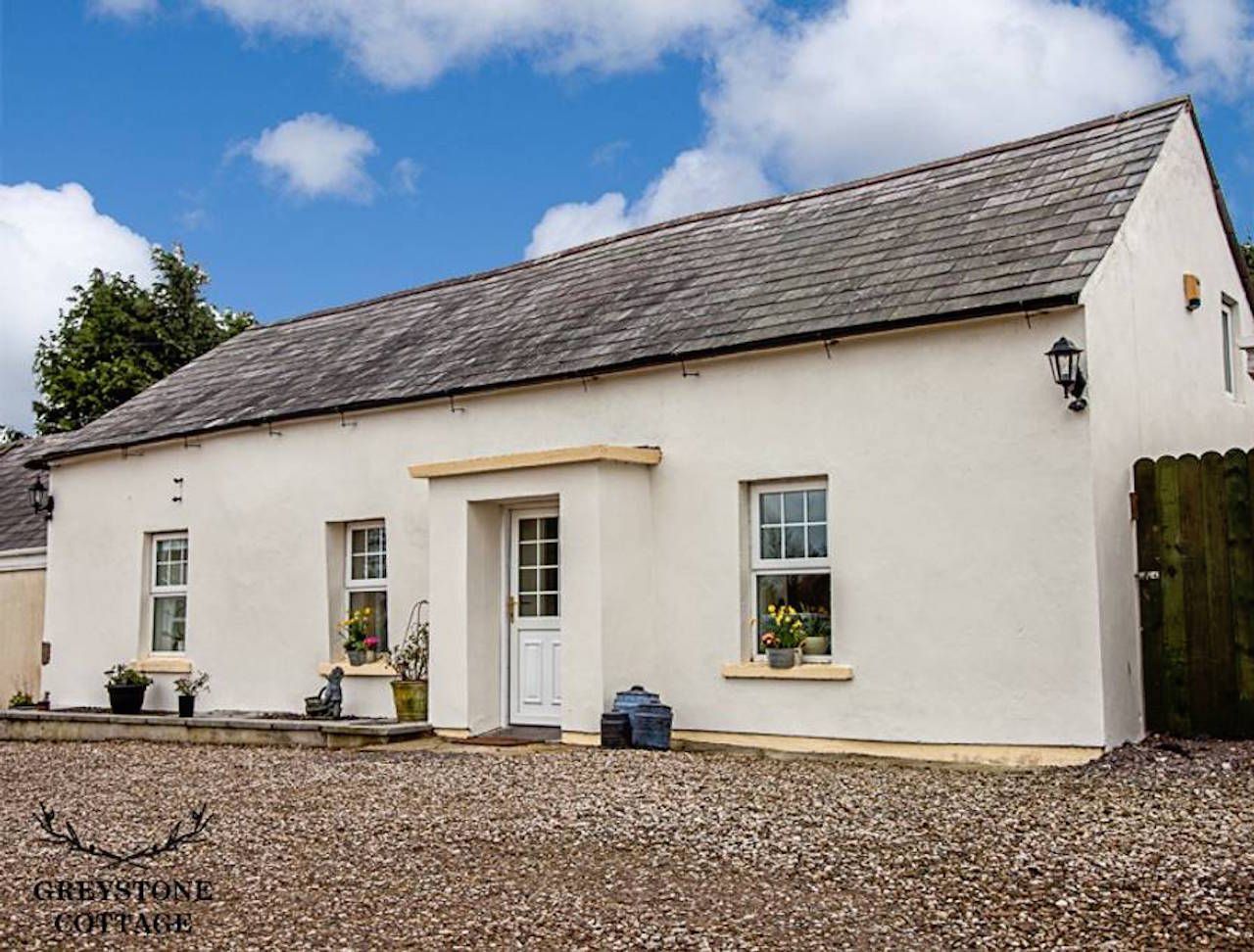 Quiet Suburban Cottage — For a more relaxed stay in Belfast, this 200-year-old cottage will not disappoint. Located just 15 minutes from the city center by bus, this will feel like stepping into another world. Everything inside oozes absolutely timeless quality, from the AGA stove to the all hardwood furniture and flooring. There’s also ample outside space, including an all-weather outdoor dining set. In keeping with the feeling of the building, guests are also provided with a free hamper of local scones, jams, and other treats.