There’s so much to do in Buenos Aires that it would be easy to spend a week there without leaving. But just beyond city limits, you’ll find the pampas plains upon which the city’s riches were built and which gave rise to the gaucho cowboy culture that’s such a fundamental part of the Argentine identity. A little farther still is the tiny neighboring country of Uruguay, which shares with Argentina an unusual version of Spanish and a strong gaucho heritage — but which has a distinctive culture of its own. 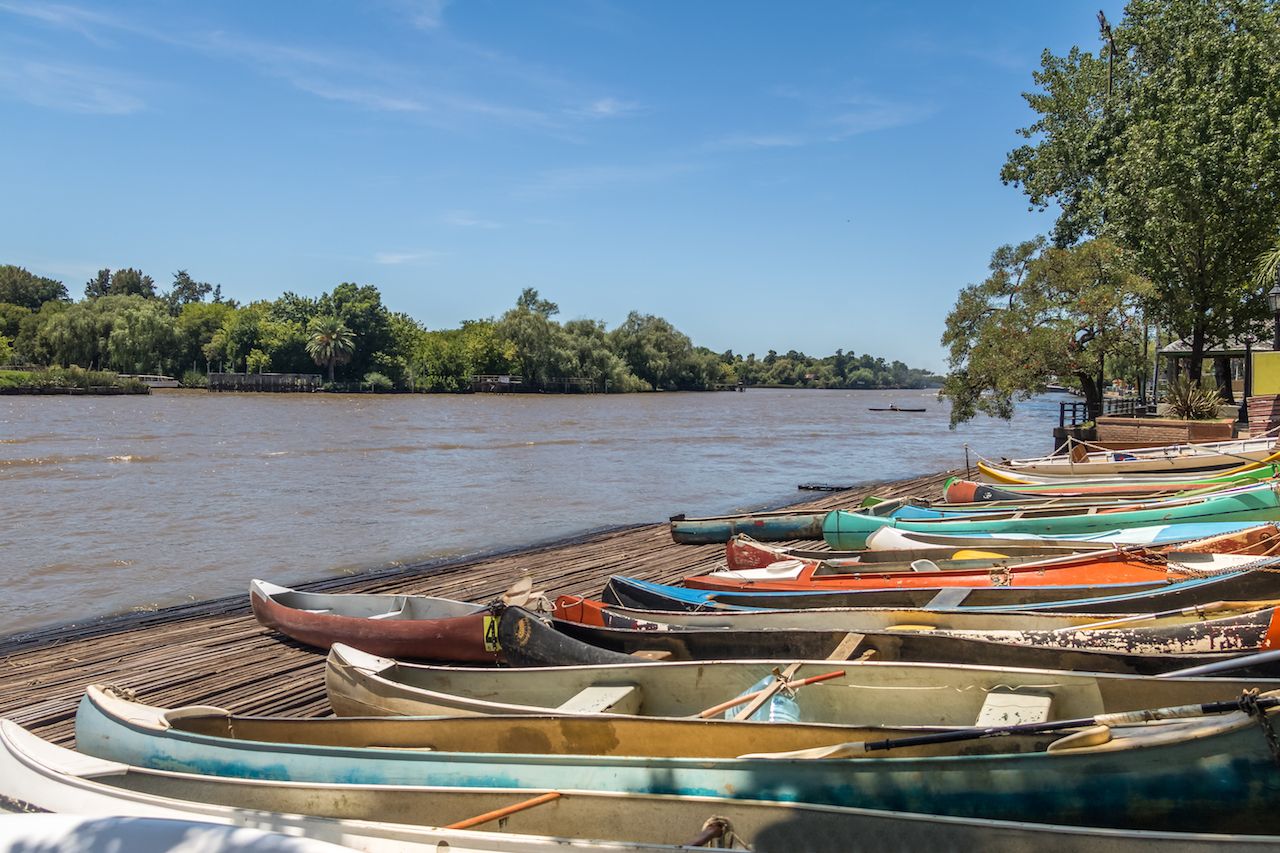 Tigre River Delta — The Tigre River Delta is outside Buenos Aires city limits and is great for a day trip when the weather is nice. Beyond the natural reserve of Delta Terra, the delta is excellent for relaxing, water sports, perusing a fruit and crafts market (open daily from 10:00 AM to 6:00 PM), and having a meal at one of many inviting restaurants. Rent kayaks and explore the islands of Tigre, where some people live year round and where others have weekend houses. Should you choose to stay overnight, the islands also have relatively nice, rustic accommodations for visitors. Tigre is very popular on sunny weekends, so consider visiting during the week. You can take the commuter Retiro-Tigre line train from Buenos Aires until the last stop an hour later at Tigre station. Alternatively, the more touristy train line called “Tren de la Costa” has regular tickets and hop-on-hop-off options. 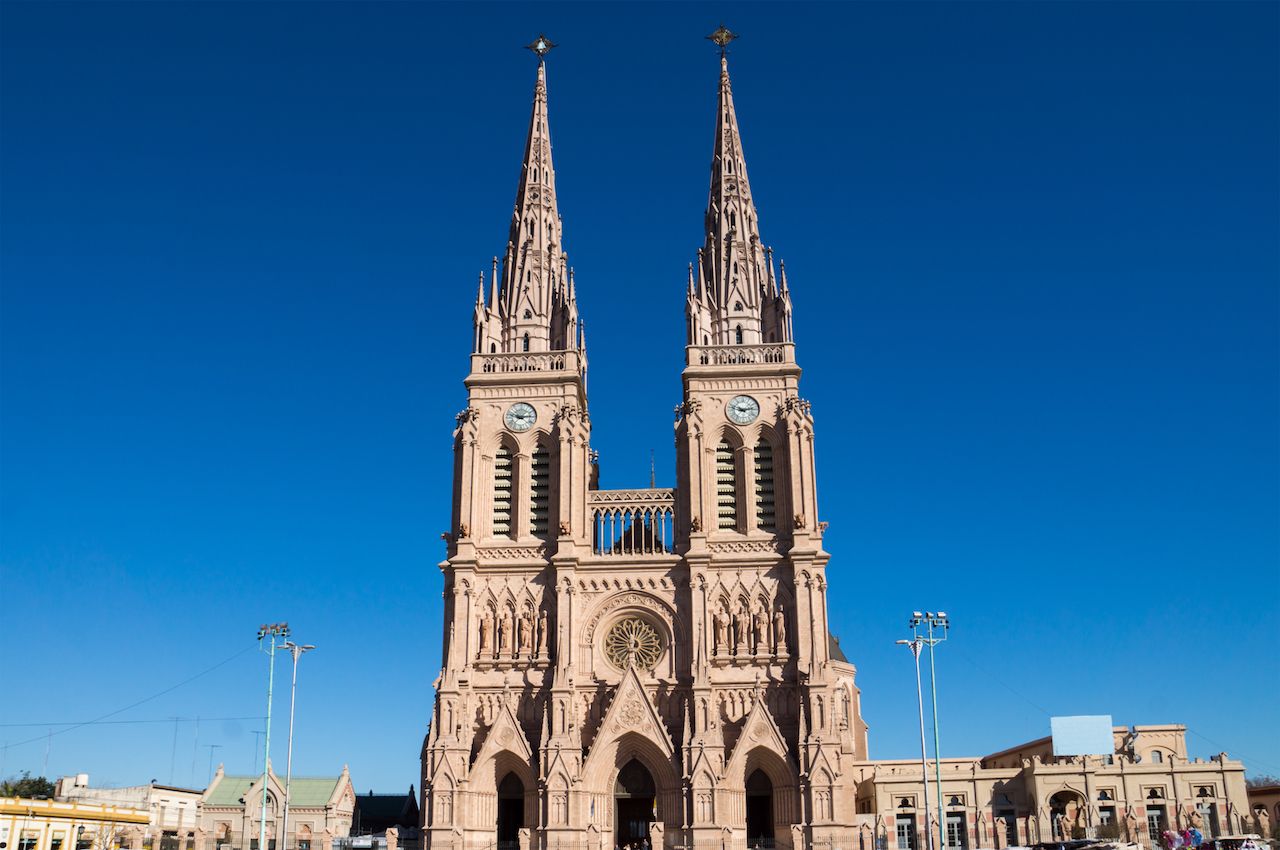 Luján and Suipacha — Due west of Buenos Aires is the city of Luján, famous for being home to one of the most important churches in Argentina. Although the city was founded in 1755, the construction of the Basilica of Luján didn’t begin until the late-19th century. Today, its two towers stand almost 350 feet tall; inside, its massive interior holds hundreds of worshipers. Argentina’s gaucho cowboys make a pilgrimage to the church every September, followed by up to a million young people who walk the 43 miles from Buenos Aires in October. After checking out the Basilica, drive 15 minutes to the town of Carlos Keen, which specializes in traditional Argentine food, for lunch. Afterward, you can drive farther west to check out the dairy farms of Suipacha, home of the famed “cheese route.” Try Argentina’s best cheeses, including some excellent goat cheese. Just note that in these small towns, everything closes during the afternoon siesta time. 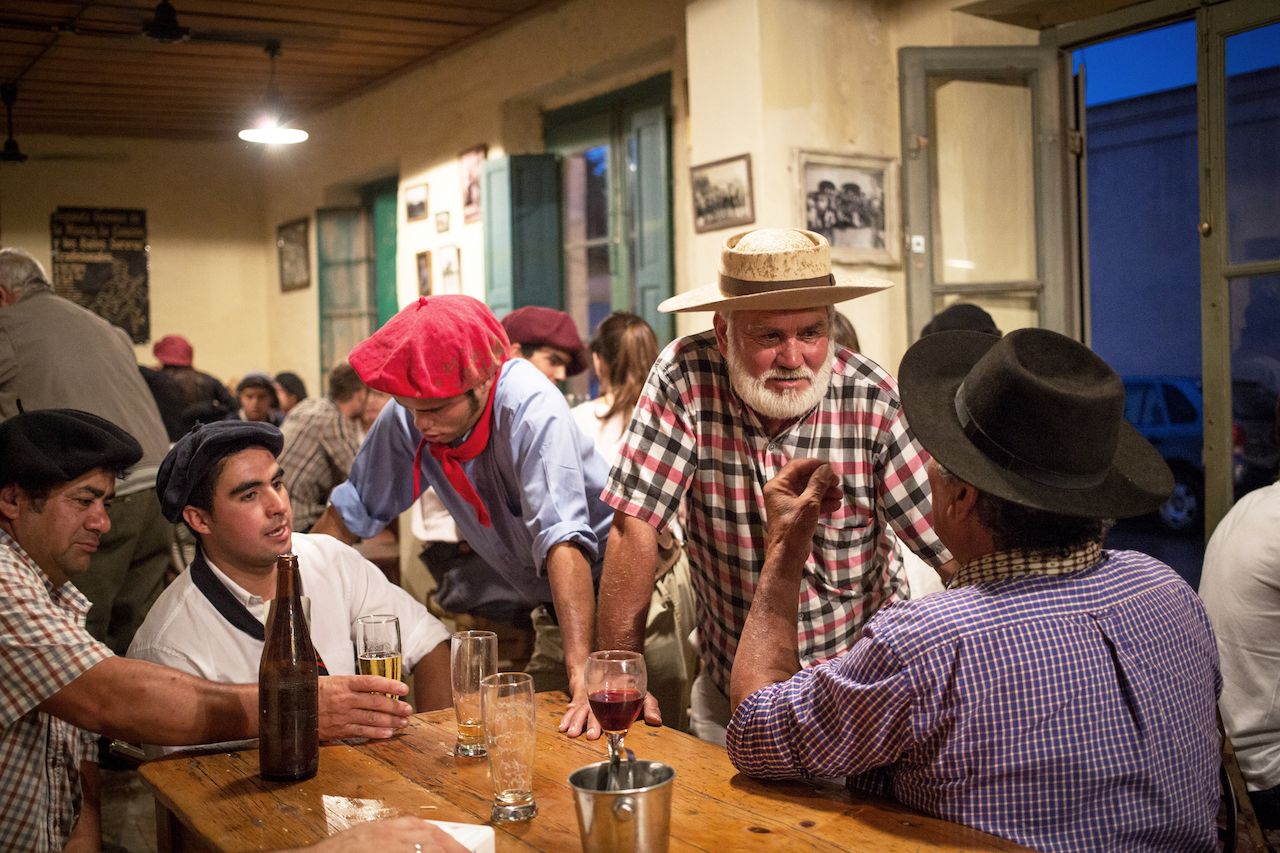 San Antonio de Areco — For a deeper look at the culture of the beloved and admittedly idealized Argentine cowboy, the gaucho, drive about an hour and a half northwest from Buenos Aires to the town of San Antonio de Areco. The town is set on the Areco River in the heartland of Argentina’s prairie pampas. Visit the Ricardo Güiraldes Gaucho Museum to learn more about the history of these cattle herders, who at one time helped make Argentina one of the wealthiest countries in the world.

After the museum, enjoy a leisurely lunch at one of the local restaurants, then walk off what is sure to be a steak-heavy meal on the colonial streets. The town is well known for its excellent craftsmanship of both silver goods and leatherware. If you can stay until the afternoon, hit up a bar to see the locals still donning berets and cowboy hats with a scarf tied around their collars. 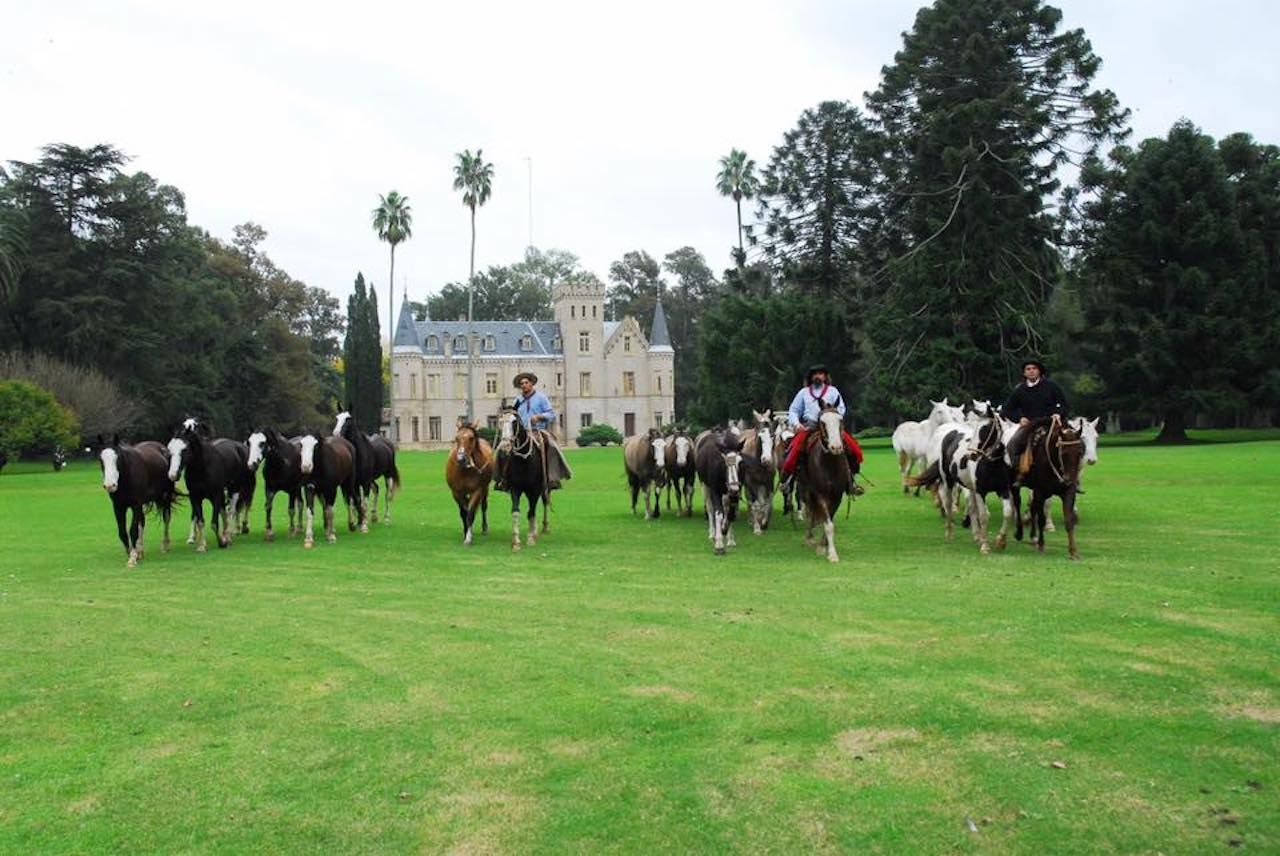 An estancia — No matter which direction you drive away from Buenos Aires, you’ll find classic Argentine estancias, or ranches, raising cattle and growing crops like soybeans, sunflowers, and corn. These estancias range from humble farms to over-the-top plantations, and for one of the best examples of the latter, head to the Estancia La Candelaria. It has a small French castle; a 250-acre botanical garden designed by Carlos Thays, who is also responsible for many parks and gardens in Buenos Aires; and a polo field. You can take polo classes if you want or just spend the day and learn about the traditions of the gaucho. If you’ve reserved ahead, you can even stay for the night, enjoying the tranquility of the place and all the food it has to offer. 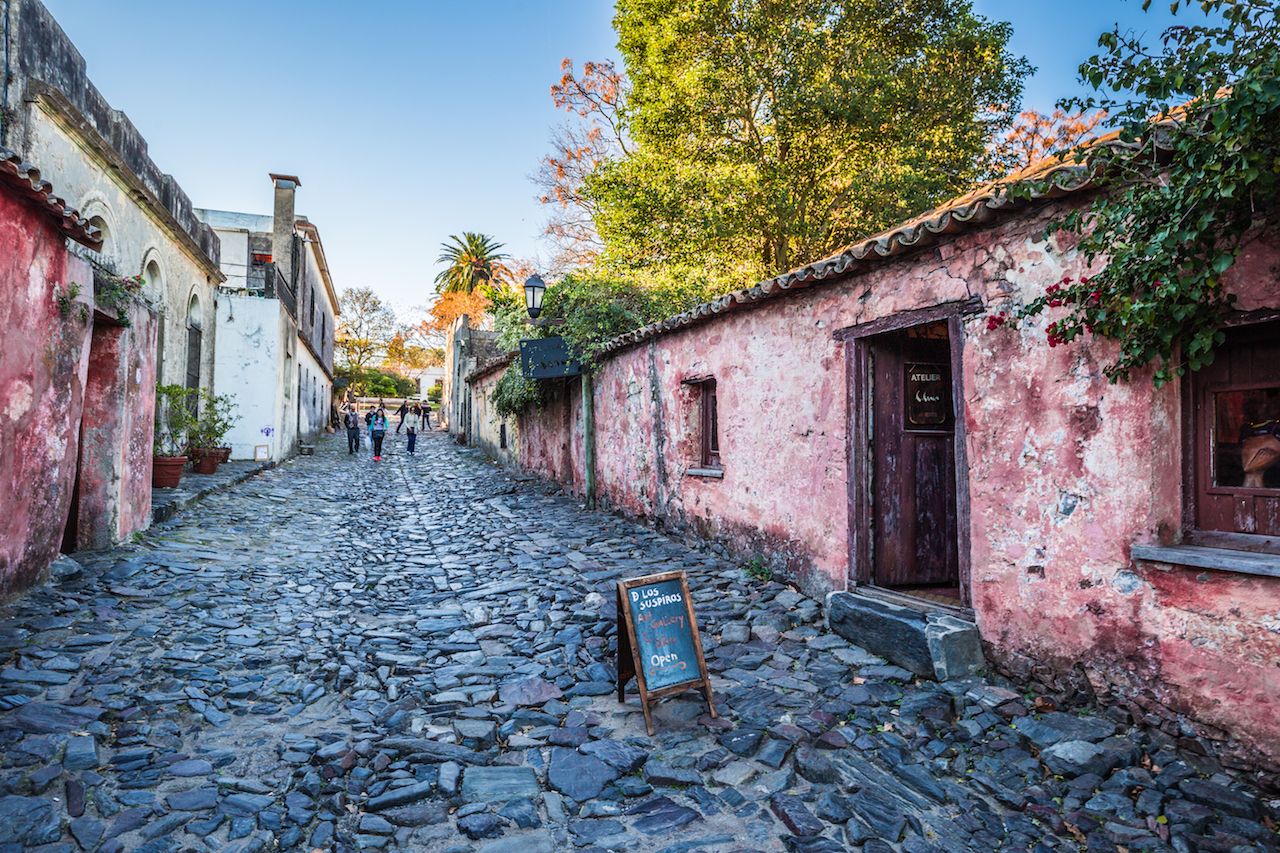 Colonia del Sacramento, Uruguay — Yes, it’s possible to visit another country in a day from Buenos Aires. A one-hour ferry from Buenos Aires deposits you on the other side of the Río de la Plata in the cobblestoned historic town of Colonia de Sacramento in Uruguay, a UNESCO World Heritage site founded by the Portuguese in 1689. (The Buquebus, SeaCat, and Colonia Express ferry lines all get you there, but they depart from different terminals, so be sure you go to the correct one.) Once in Colonia, you can walk along streets of the old town, view city walls that date back to 1745, or check out the 19th-century lighthouse. You can also visit a local winery for a guided tour and tasting. Stay at the winery or one of the nearby ranches for a traditional asado lunch of grilled meats accompanied by wine and ultra-sugary desserts. If you don’t have a traditional asado, be sure to eat a famed Uruguayan chivito, a ridiculously large sandwich containing a thin piece of steak top by mozzarella cheese, egg, bacon, pepper, mushroom, olives, fried onions, and sauce.