The first thing you should know about dining in Argentina is that locals eat a lot of beef. So much so that beef deserves its own section (listed below). The second thing to know is that dinner starts late. Locals head to restaurants anywhere between 9:00 PM to 11:00 PM, and many locations won’t even start serving dinner until 8:00 PM or later. As long as you start with those facts in mind, Buenos Aires is your culinary oyster.

Some of the most affordable meals can be found at family owned restaurants called bodegones. There, you’ll find traditional dishes like milanesas (the South American version of chicken parmigiana), churrascos (thin steaks), Spanish tortillas, pasta, and stews like guiso de mondongo (tripe) and locro (potato-based).

There’s a strong Italian and Spanish influence in Buenos Aires cuisine. Some of that can be seen in porteños’ love of pizza. Case in point: There are more pizzerias than steakhouses in Buenos Aires. The pizza is unlike what you’d see in New York, Chicago, or anywhere in Italy, though. It’s loaded with cheese and then sprinkled with a little more cheese. The only type of quick food that rivals pizza are empanada shops.

Don’t be afraid of trying food from street vendors when you pass by them. Order garrapiñadas (caramelized almonds and other nuts) if you’re craving something sweet, and choripán (beef or pork sausage on a bun) or bondiola (pork shoulder sandwiches) if you want something savory. And don’t leave the city before ordering a medialuna (sweet croissant) at whatever coffee shop you go to. It comes hot from the oven and smothered in melted cheese.

Here are the best places to eat in Buenos Aires right now, no matter your neighborhood or budget.

Güerrin $$ — Güerrin has been serving up Argentine-style pizza and empanadas since 1932, and it’s more popular today than ever. You can’t go wrong with anything you order here (especially when washed down with cheap wine or beer). It’s cash only, and you need to come prepared to eat lots and lots of cheese on top of your pie. 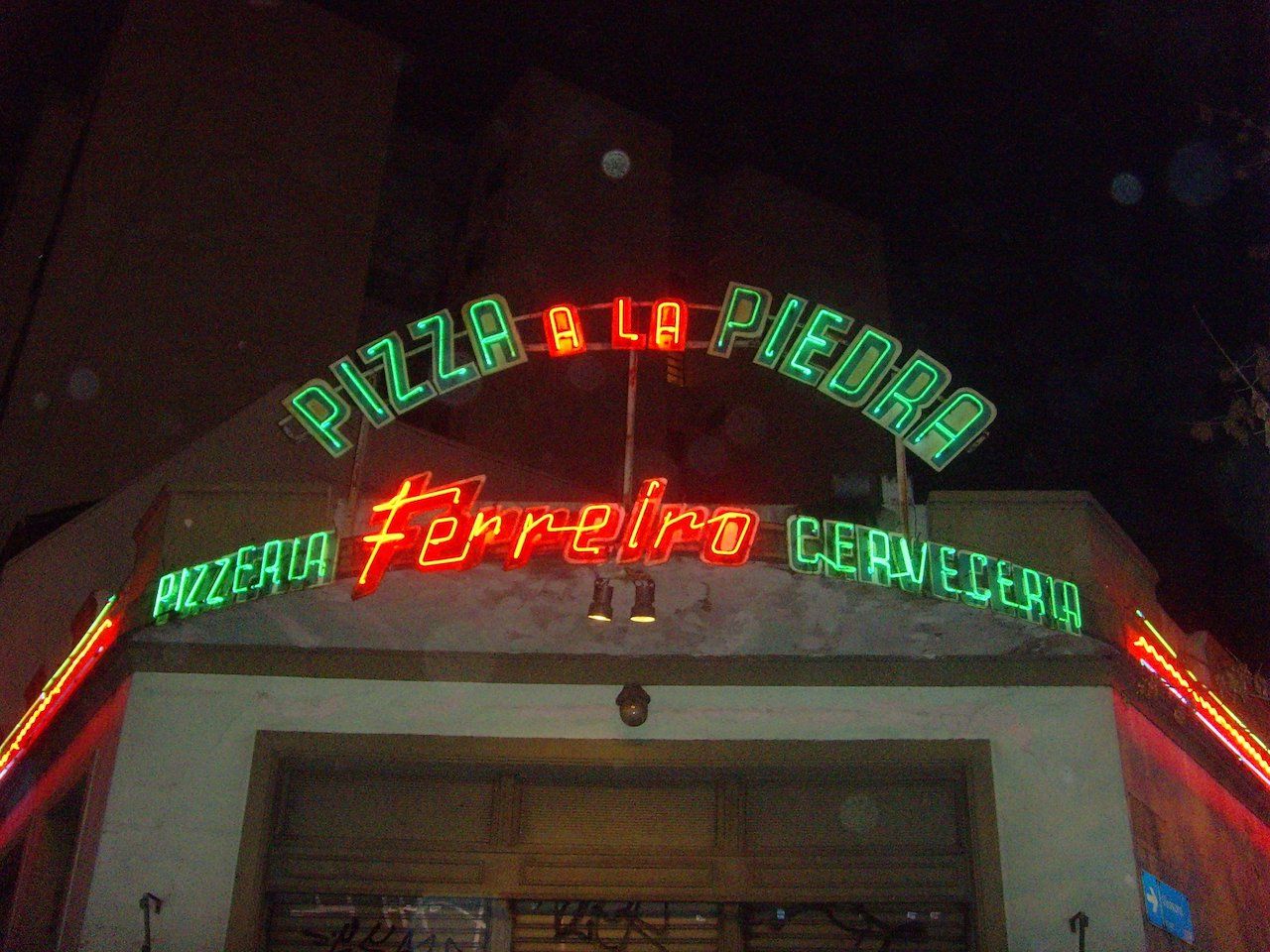 Ferreiro $$ — This is one of the most famous pizzerias in the city, and sits right on the border of the Caballito and Villa Crespo neighborhoods. It specializes in stone-cooked pizza with crispy edges that’s loaded with layers of cheese on every pie. If you can’t make it to the physical location, Ferreiro delivers. 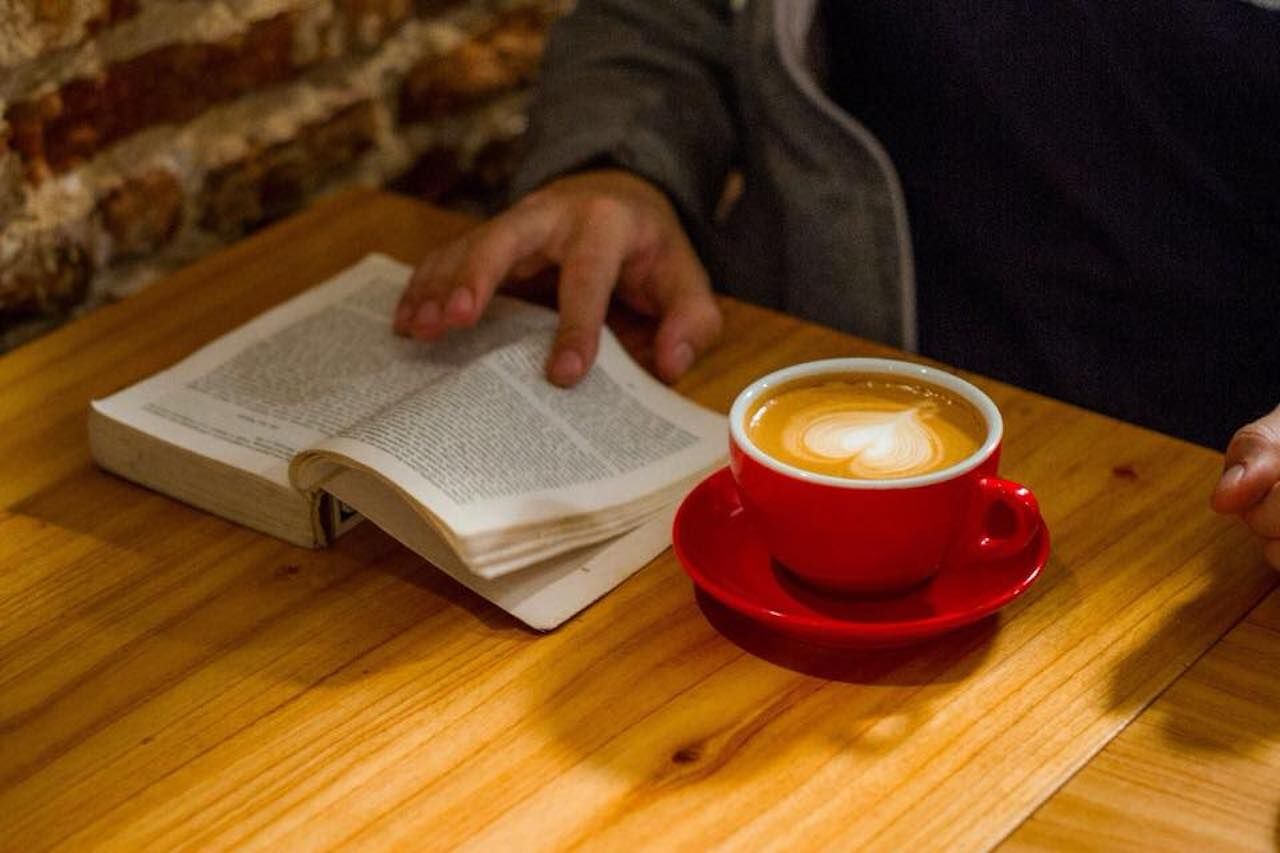 Negro Cueva de Café $ — Negro is a top coffee spot in Buenos Aires. The espressos and espresso-based drinks are complemented by cakes, pastries, and tarts. It’s the perfect spot to stop for a coffee break and take in the local atmosphere. 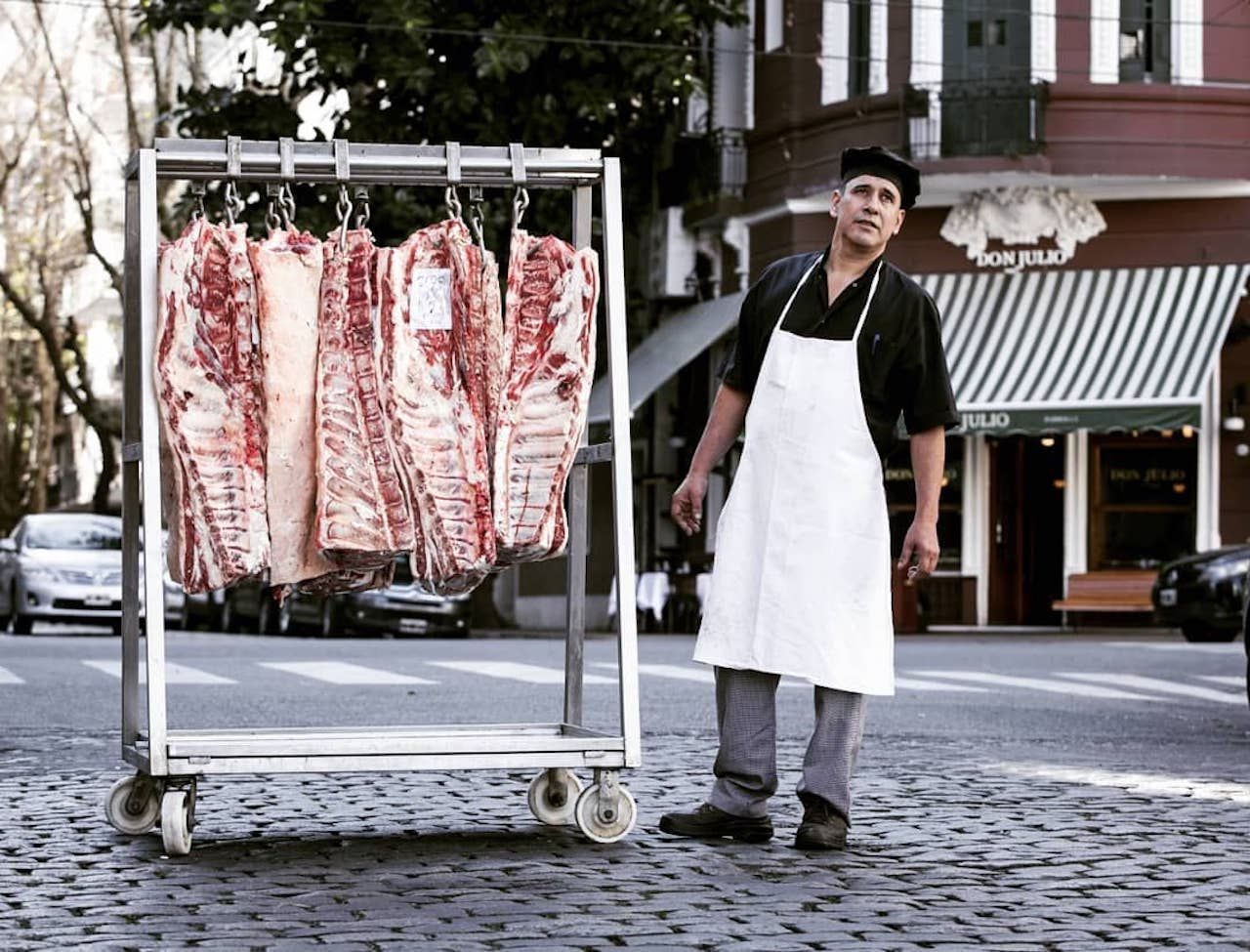 Don Julio $$ — Don Julio is the classic example of what a steakhouse in Buenos Aires is like. It’s consistently rated among the top parrillas (steakhouses) in the city thanks to expertly grilled meat, and a long wine list complements the food menu. Wait times can get up to two hours without a reservation, so plan ahead.

NOLA Buenos Aires $$ — NOLA combines Cajun cuisine with Argentine craft beer. The woman behind the bar and restaurant, Liza Puglia, grew up in New Orleans and worked as a chef in New York before opening NOLA. The food has flavors straight from Louisiana while the beer and wine is all Buenos Aires. Five beers from a Palermo craft brewery called Filidoro Artesanal are on tap, and the bar also serves regional wine and seasonal cocktails.

Las Pizarras $ — Go to Las Pizarras for the highly focused and constantly changing food menu. Along with the meat-focused dishes that Argentine restaurants are famous for, there’s often lighter seafood options available as main courses and shared plates. Wine pairings are listed on a chalkboard next to the menu options of the day. It gets crowded, so either eat early or come prepared to wait in a line outside. 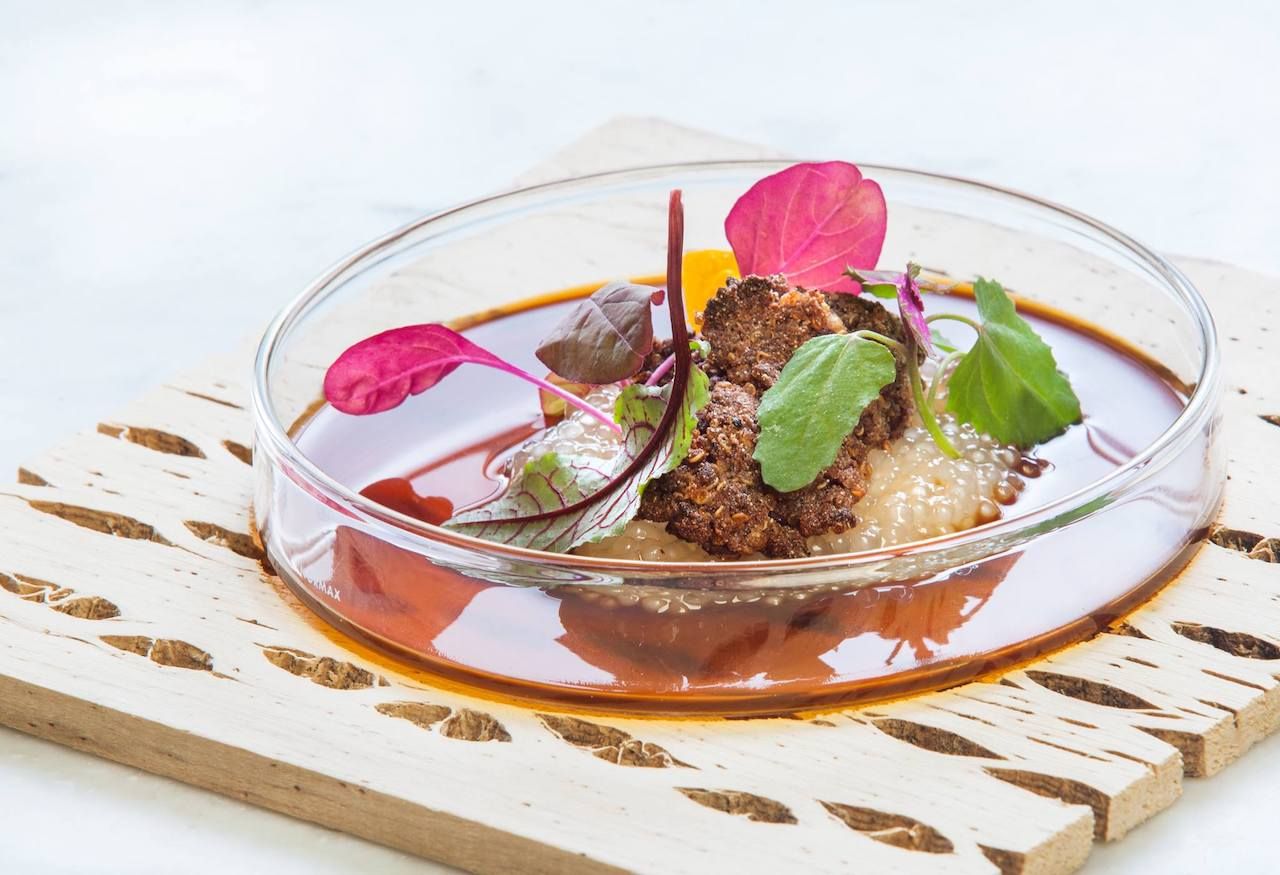 Tegui $$$ — For fine dining in Buenos Aires, it’s hard to top Tegui. An ever-changing, seasonal tasting menu comes with optional wine pairings, and the emphasis is on local produce and ingredients. Whatever the dishes of the day are, it always veers more toward innovative than classic, with a mix of seafood and steaks. Tegui is run up by chef Germán Martitegui, who’s on Argentina’s edition of MasterChef.

Siamo nel Forno $$ — If you’ve worn yourself out on Argentine-style pizza but you’re still craving a slice, head to Siamo nel Forno. The pizza here is like pizza made in Naples: thin crusts and cooked in a wood-fire oven. Calzones and desserts are other specialties at Siamo nel Forno, and don’t forget a glass of wine. 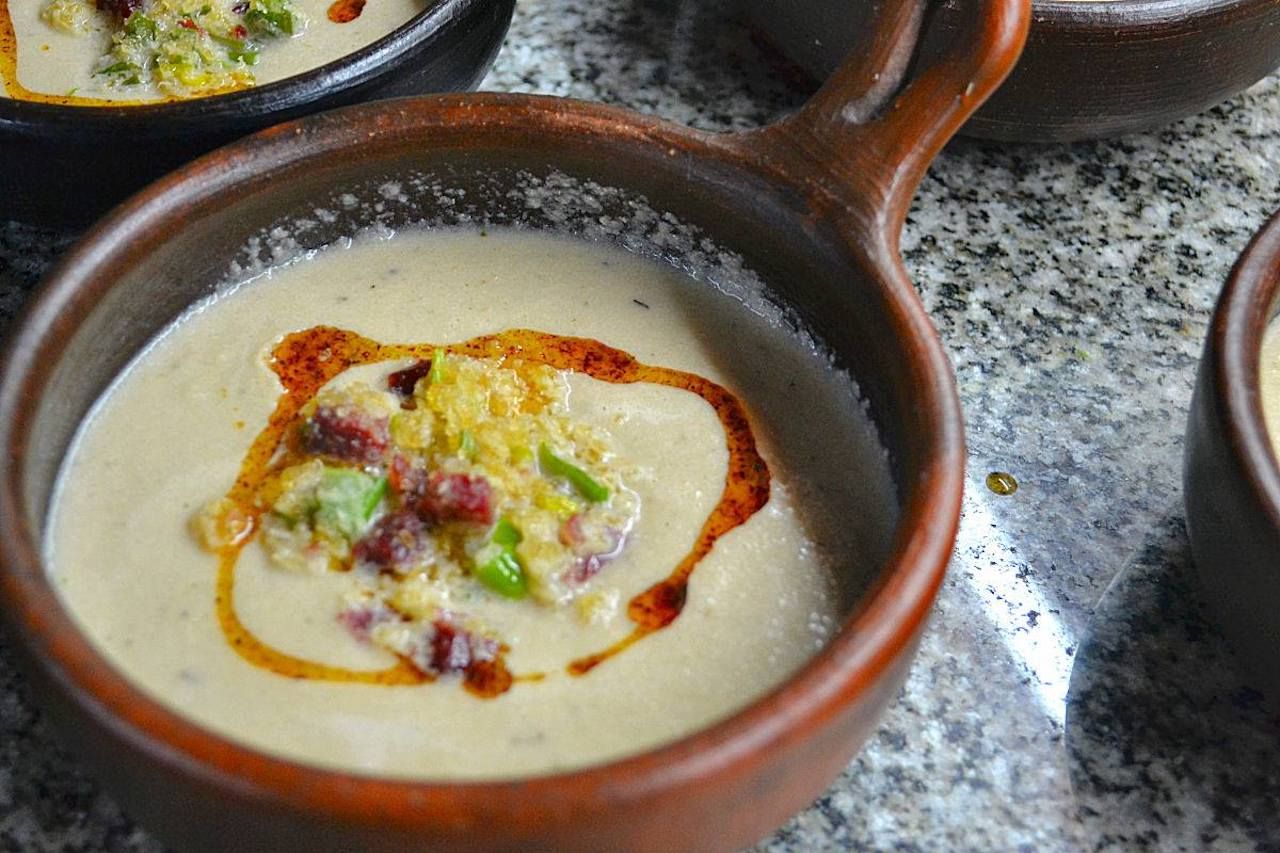 Casa SaltShaker $$ — While not technically a restaurant, Casa SaltShaker is a unique opportunity for travelers in Buenos Aires. The spot is someone’s home that’s opened up for shared meals (make sure to check dates and make a reservation, as there’s only room for 10). The menu is whatever the home chef feels like making that day, but the dishes tend to be vegetable forward and seafood heavy.

La Cocina $ — Out of the many, many empanadas you can find in Buenos Aires, La Cocina has some of the best. It’s the closest thing you’ll get to homemade without entering someone’s house. Start with a classic carne picante (spicy meat) empanada, then eat your way through the other options. 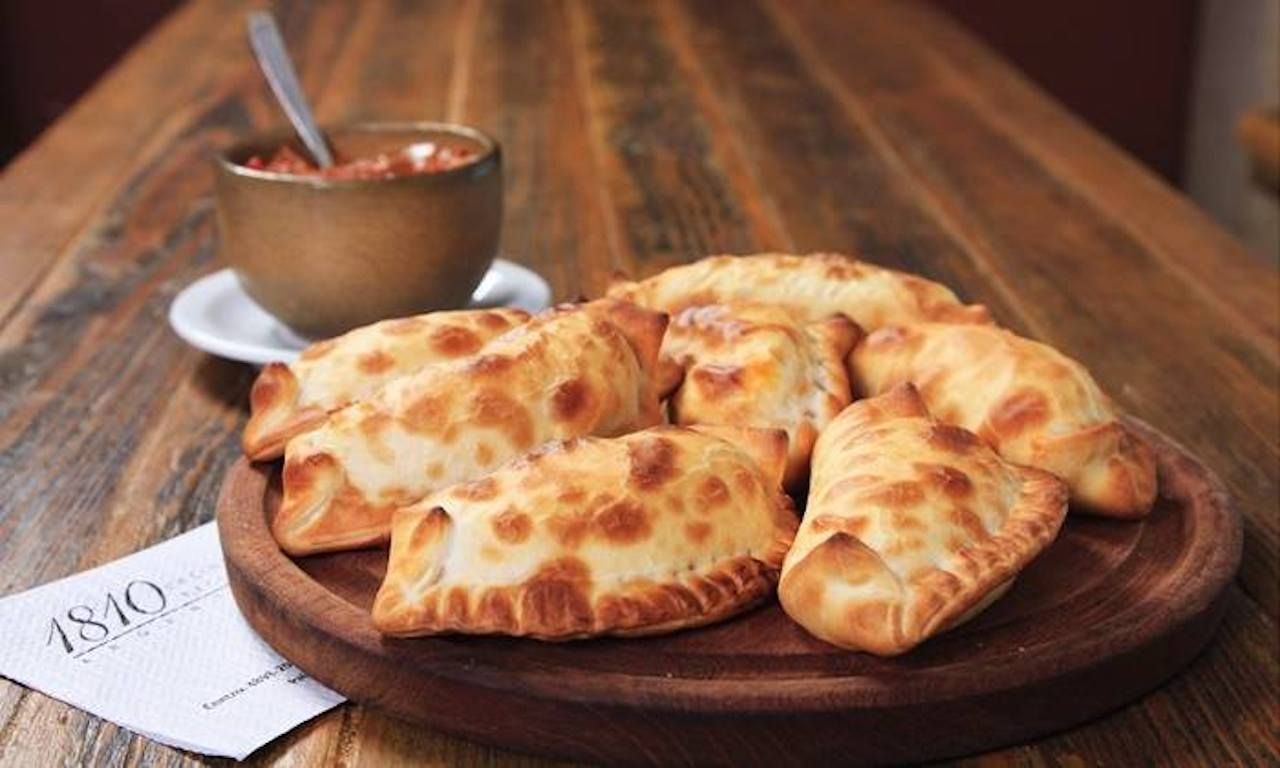 1810 Cocina Regional $$ — 1810 is another standout empanada vendor in the city, and easy to find throughout Buenos Aires. Named after the year of Argentina’s revolution, 1810 Cocina Regional sells a wide variety of empanadas along with stews that will warm your soul on cold days. Try the carbonada (a sweet and sour stew with peach, corn, and meat). There are locations in Palermo, Belgrano, and downtown.

Maru Botana $ — Named after a famous Argentine TV chef, Maru Botana is a chain of cafes specializing in coffee and cakes. Come hungry, because you’ll want to sample multiple pastries. Vegan options are available. There are locations in Palermo, Belgrano, and Retiro. 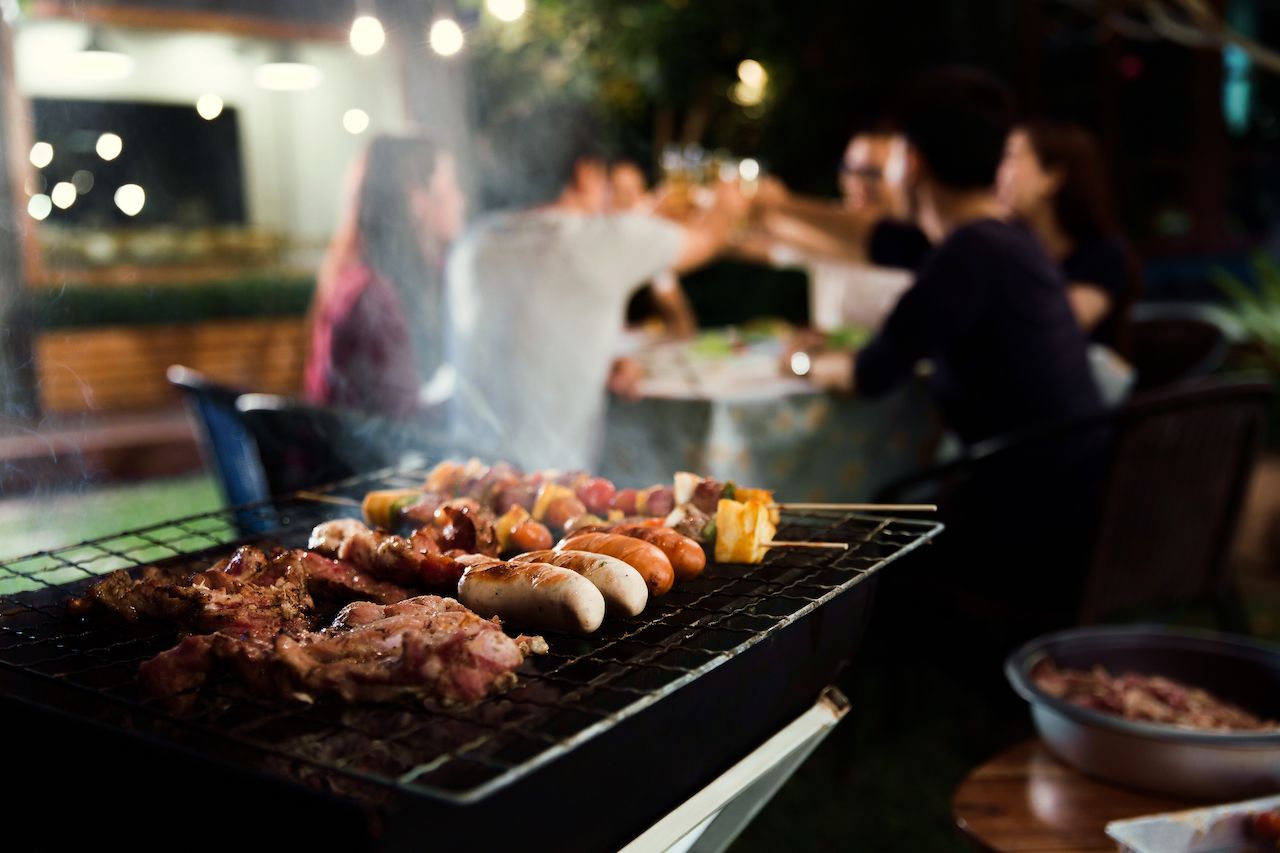 Argentina is a beef-eating country. Residents eat more than twice as much beef every year as people in the US, and consume the second highest amount of beef per capita in the world. If you want to understand the food in Buenos Aires, you have to understand beef and the culture of asados.

Asado can mean three things: a social gathering, a meal with a series of dishes, and a specific cut of beer.

Asado as a social gathering.

Asados usually happen on Saturday nights or during Sunday lunches. It’s essentially a cookout with family, friends, and plenty of grilled meat. The asador is in charge of the grill, and you should not under any circumstances touch the grill unless the asador says to. What you should do is bring something like wine, beer, dessert, or a salad (people can’t live on meat alone).

Be prepared to eat a ton and stay up late if you’re invited to one; they can last all day and into the night.

Asado as a meal.

Asados can also mean a multi-course meal. It starts with picadas, which are large appetizers with cheeses, ham, olives, nuts, and bread. Other foods that can be included are blood sausage, provoletas (grilled provolone cheese), empanadas, pickles, and achuras (grilled kidney and intestine). Picadas are normally accompanied by beer, wine, or Fernet and Coca-Cola.

The main course is always a large variety of grilled meat with potatoes and vegetables as sides. Red wine is also usually served.

Finally, there’s dessert. It can be anything like fruit salad, ice cream, flan, budin de pan (a sweet pudding similar to flan, but made with a lot of bread as well). On the savory side, there’s the vigilante dessert, which consists of cheese and sweet potato jam. Don’t forget a coffee or digestif to get over everything you just ate.

Asado as a term for steak.

The last usage of the word refers to steak; the most important food group in the Argentine diet. These are the cuts you’re likely to find:

Where to experience asados

You can experience asados either by getting invited to one at someone’s home, or going to parrillas. The social gathering is great, but the advantage of going to a steakhouse is that you can choose how much you eat, what cut you order, and how long it lasts. Below are three parrillas worth visiting.

La Cabrera — A classic parrilla featuring elaborate and simple dishes. One stand out order is the chorizo steak. La Cabrera is expensive, but if you follow the Argentine way of eating early then you can get a discount. Eat between 6:30 PM and 8:00 PM (and pay your bill before then), and you can get 40 percent off your meal.

Don Zoilo — Pork hangs from the ceiling and shelves are filled with rows of wine bottles. The most popular cut is asado de tira (some 400 pounds are sold each weekend), and make sure to get a side of French fries.

El Desnivel — An affordable parrilla in the heart of San Telmo. It’s frequented by locals, and although the front is lackluster, the inside is full of tables. The asada de tira and bife de chorizo are some of the most popular orders.