It’s no secret: Central Asia is the place to hit these days if you want to keep your world traveler street cred. For the past two years the region has been trending and it’s likely to see even more international visitors when the rumored universal Central Asian visa becomes a reality. Not that it’s currently difficult to get to the Stans — with the visa waivers of Kyrgyzstan and Kazakhstan, and the super fast e-visas of Tajikistan and Uzbekistan, it’s never been easier to check out the former Soviet states east of the Caspian Sea.

Uzbekistan, especially, is benefiting from its new openness to the rest of the world. In 2018, the nation welcomed over twice as many international visitors than in 2017, and for good reason. A key stop on the Silk Road and a hotbed of both Islamic and Soviet architecture, the nation is full of jaw-dropping sights. But if there’s one place you can’t miss in Uzbekistan, it’s Samarkand. It’s a city (and a UNESCO World Heritage site) that has been continuously inhabited for over two and a half millennia and is packed with extraordinary mosques, madrasas (schools), and mausoleums that will leave you weak in the knees.

To make sure you do Samarkand the right way, even if you only have one day in the historic city, follow this itinerary while the place is still under most travelers’ radars — which won’t last.

Fill up with Uzbek carbs at Siab Bazaar. 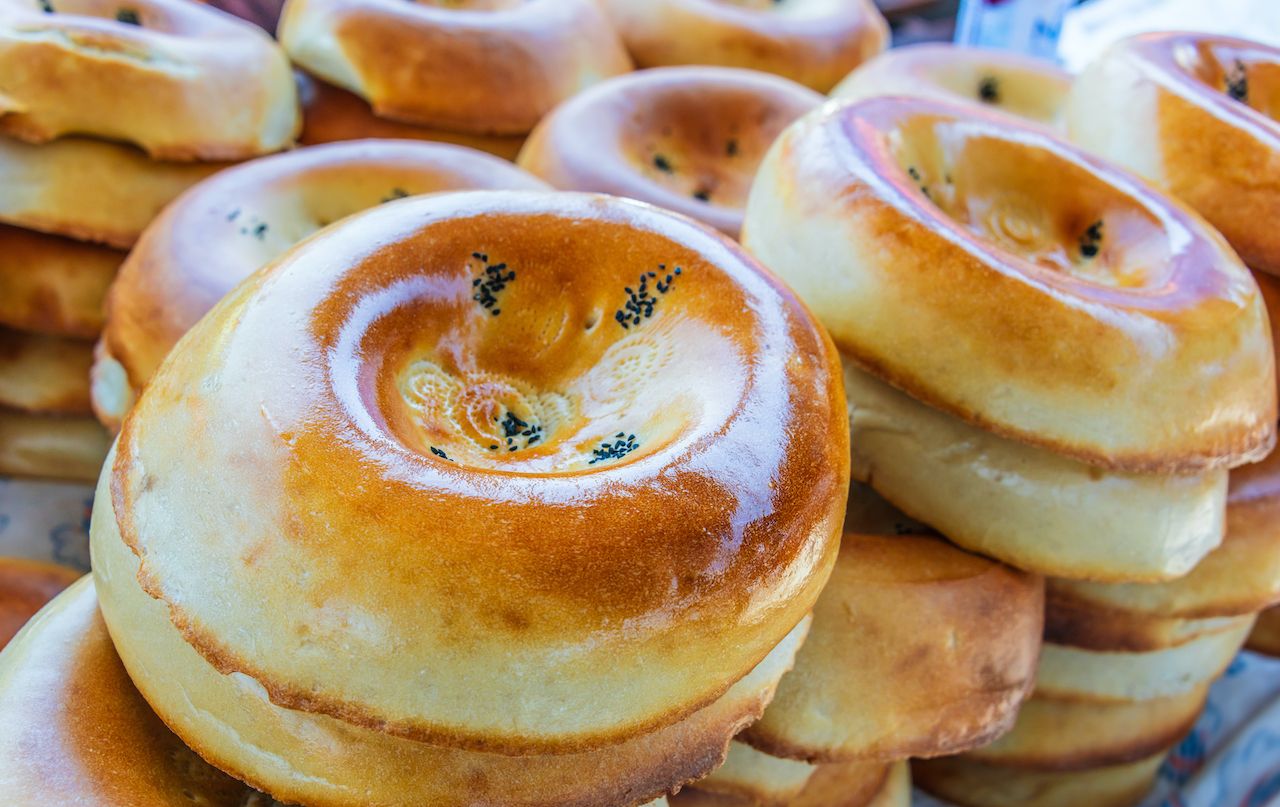 Siab Bazaar, located in the old town and close to some of the Samarkand’s best sights, is busy in the morning. But the hustle and bustle should not discourage you from taking the time to get lost among the heavy conflation of spicy scents, as well as the mountains of produce, dried fruits, and nuts on display. Once your stomach starts rumbling, get your first taste of the local Uzbek non. A tandoor, wheat flatbread, non is a staple of Uzbek cuisine, and each city has its own version. At Siab Bazaar, you’ll find some traditional Samarkand ones: beautifully round, golden, decorated with nigella seeds, and featuring a dip in the center. Skip the ones with splashes of bright colors — those are are meant to be eaten to celebrate the engagement of a couple. If you don’t mind savory food in the morning, make sure to also grab an onion patyr — another type of delicious flatbread that should keep you satisfied for a while. You’ll be doing a fair bit of walking, so don’t cheap out on the sustenance. 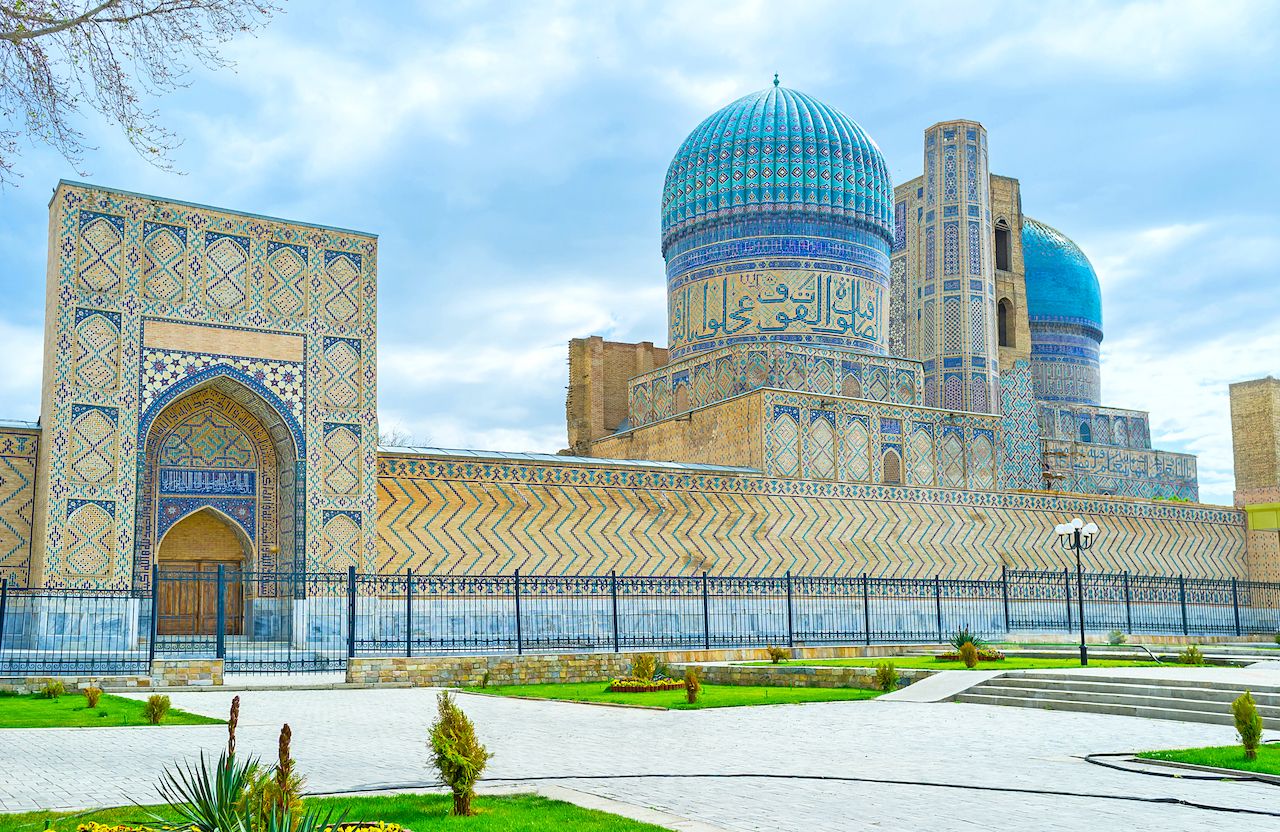 A two-minute walk south will take you from the covered market to the colossal Bibi-Khanym Mosque, whose mosaic tile work and vibrantly colored cupola are nothing short of impressive. The mosque, supposedly built by Emperor Timur’s wife while he was campaigning in India, is said to have been, at some point in history, the biggest in the whole of the Islamic world, accommodating 10,000 worshippers. One among many examples of the grandeur of Samarkand as an imperial city under Timur, Bibi-Khanym can be toured for less than 3 USD.

Wander the lanes of the Shah-i-Zinda Necropolis. 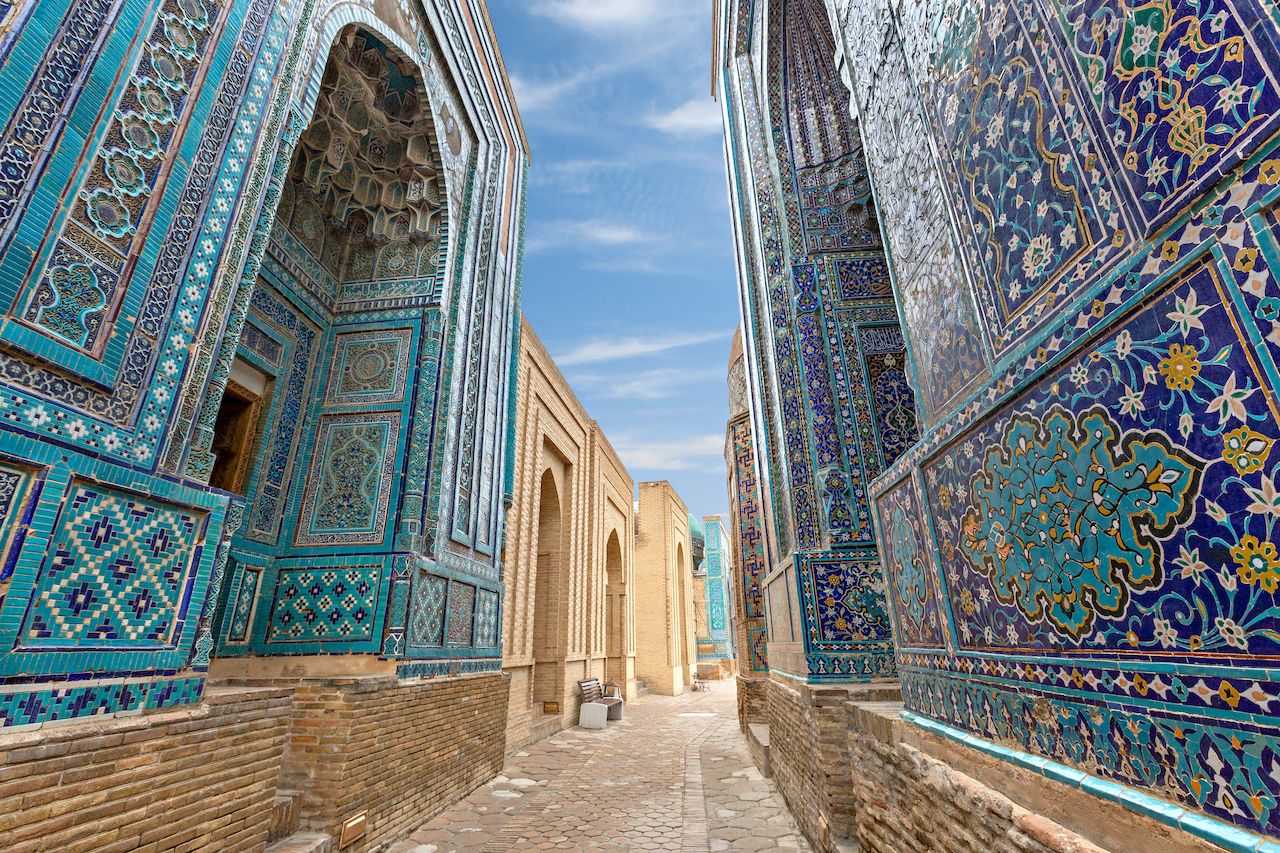 A 10-to-15-minute walk northeast will take you from Bibi-Khanym to the Shah-i-Zinda Necropolis. Don’t follow Google Maps to get there as it’ll make you go around the highway for double the time. Instead, use the white bridge to cross the busy stretch of road.

Although it’s mostly all tombs, Shah-i-Zindha is remarkably colorful. Legend has it that the ensemble contains the tomb of Kusam-ibn-Abbas, the cousin of the prophet Muhammad, who brought Islam to the region. As such, the site is not only a tourist attraction but a place of pilgrimage, so be respectful of worshippers. Family members and friends of Emperor Timur and his grandson Ulugbek are buried here, too. Because of the important remains they house, just about every tomb in the necropolis is intricately decorated. Your eyes won’t be able to keep up with all the amazing tile work done there, but try — this is Islamic architecture at its best and you won’t want to miss any of it. The entrance fee is less than 2 USD.

Rest your legs and have lunch in Russian Town. 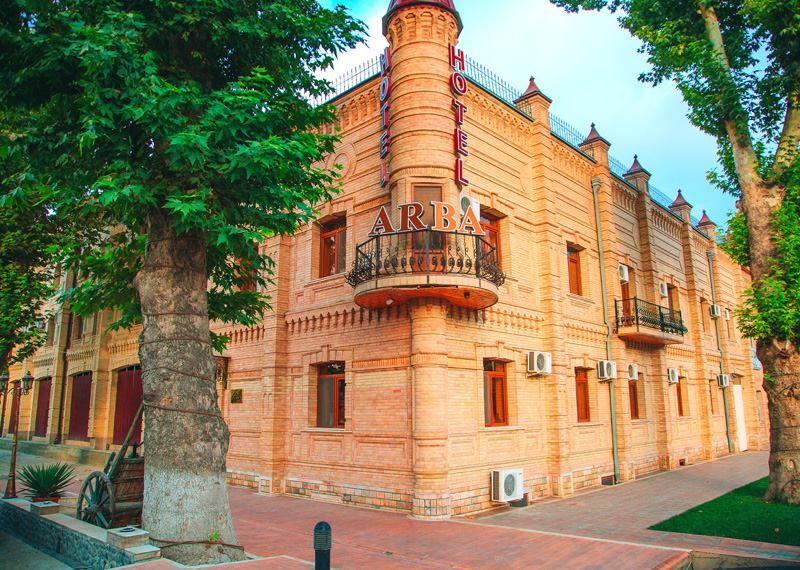 Except for the bazaar, there’s not much in the way of authentic food near the mosque or the necropolis. Instead of falling for an overpriced tourist trap, grab a taxi from Shah-i-Zinda and make your way out of the old town to Russian Town to have a sit-down lunch at Staraya Arba (walking will take you about 50 minutes). Decked out in an elaborate traditional decor, the food served at Staraya Arba adheres just as much to tradition. With some international items to appeal to picky tourists, there are mostly Uzbek options on the menu. Try the signature bedana (stuffed quail), or Central Asian staples like plov, a rice dish with meat, caramelized onions, and carrots. The coffee and pastries on offer don’t disappoint either.

Tremble at the tomb of Timur (the Gur-e-Amir Mausoleum). 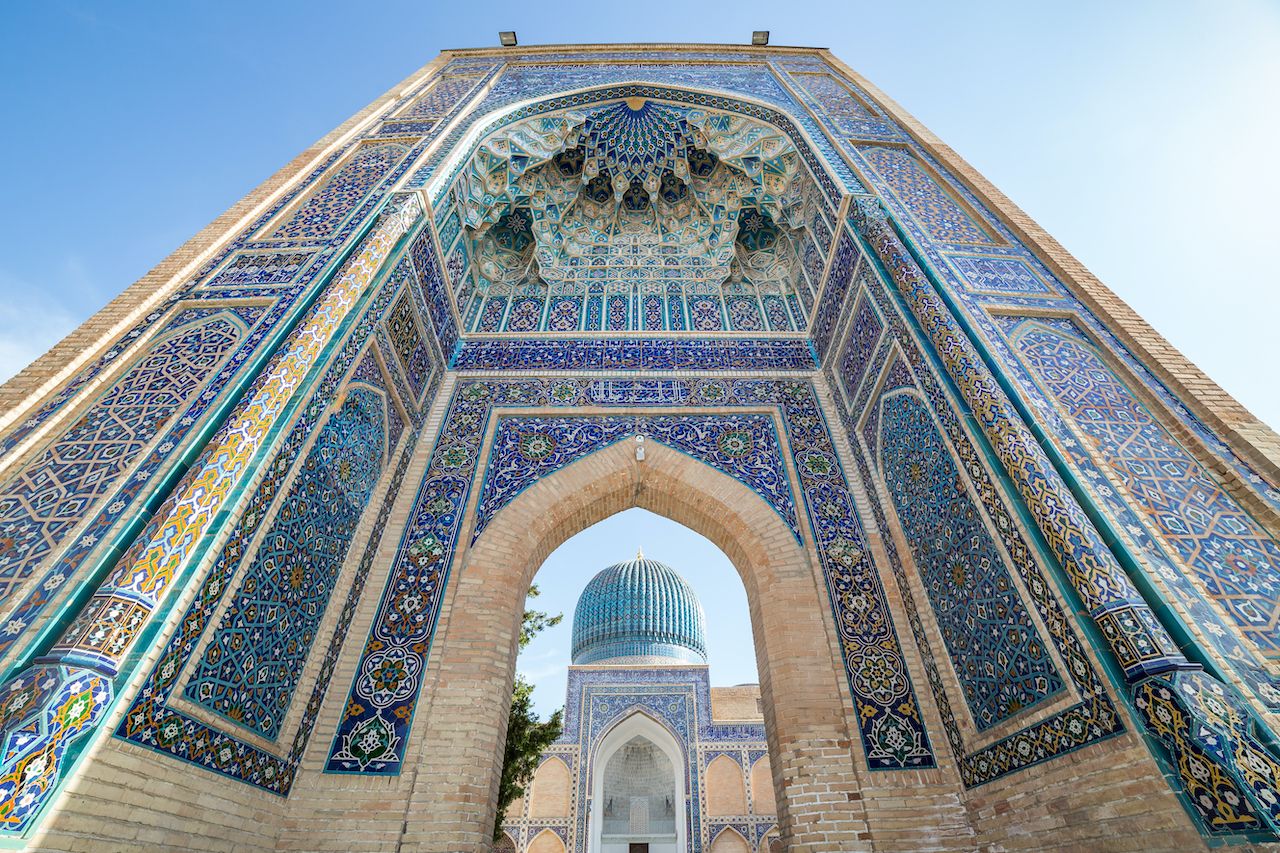 After you’ve had your fill at the restaurant, make your way to the Gur-e-Amir Mausoleum on foot. In less than 20 minutes, you’ll find yourself at the tomb of Uzbekistan’s most famous ruler.

Often compared to Genghis Khan, Timur was an ambitious and vicious conqueror, whose military campaigns killed more than one million people. Timur’s empire, with Samarkand as its capital, included all of Central Asia, Iran, Iraq, and parts of Syria, India, Russia, and Turkey. Timur’s custom after he left the regions he conquered in an utter state of devastation was to forcibly send the finest local craftsmen to apply their skills in Samarkand and make the empire’s capital the most beautiful city out there. Clearly, the tactic worked.

The mausoleum starts with an immense portal ornately decorated with blue tiles, both characteristics of the Timurid architectural style. After a courtyard, another portal opens on the mausoleum, topped with mosaiced, textured cupolas — another signature composition of the Timurid dynasty. Inside, a grandiose display of shiny and intricate mosaic tiles covering just about every surface will amaze you. The bodies of all those buried at Gur-e-Amir lie in a crypt below the mausoleum, inaccessible to the public.

The rumor goes that the tomb of Timur is cursed. Carved into the grave, the warlord supposedly left two dire warnings for future generations: “When I rise from the dead, the world shall tremble” and ‘Whosoever disturbs my tomb shall unleash an invader more terrible than I.” You’ve been warned. There’s more than just Timur resting for eternity in this magnificent building; his sons, grandsons, and some of his beloved teachers lie in Gur-e-Amir. 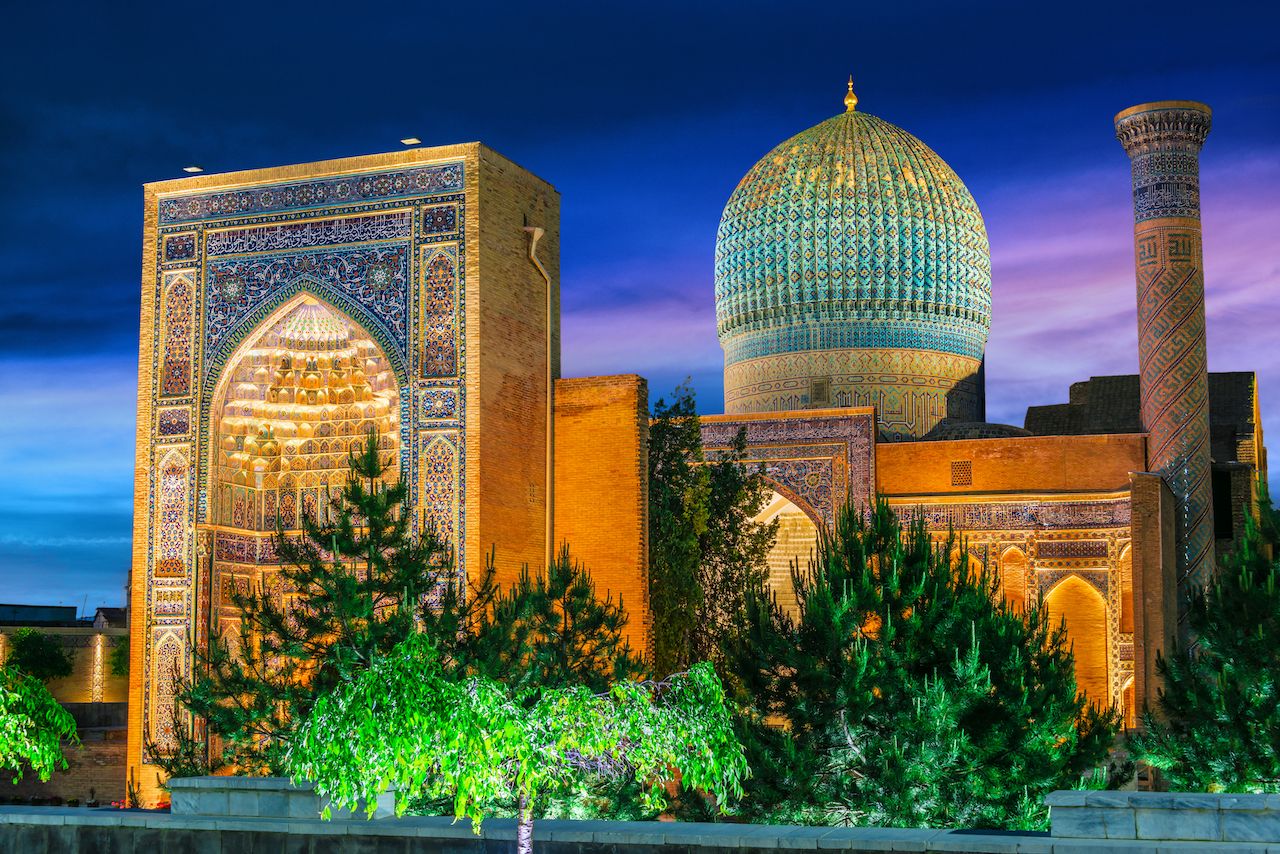 Entrance to the mausoleum will set you back approximately 3 USD. If you have time to come back when the sun has set, you’ll see the mausoleum lit up spectacularly. It’s a sight worth returning for. 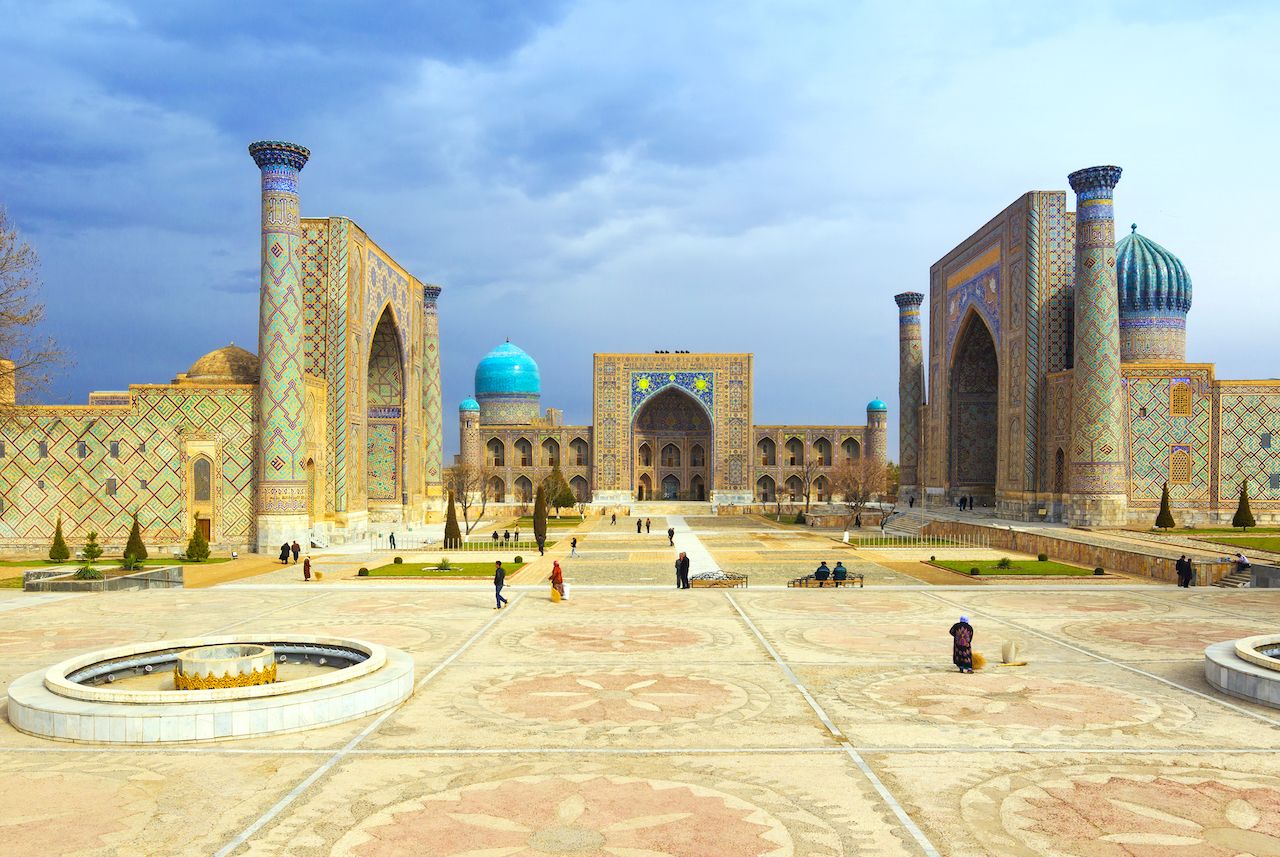 A short walk back toward the old town will take you to Registan Square, the heart of Samarkand for centuries and a remarkable sight to behold.

The square used to be a marketplace where traders stopped while traveling the Silk Road. Later, when the three madrasas were built around the square (Ulugbek Madrasa in 1420, Sher-Dor Madrasa in 1636, and Tilya-Kari Madrassa in 1630), it became a center of learning. Today, it is a place to admire the splendor of Islamic architecture and remind you of the significant place Uzbekistan played in the history of the world.

Tours run regularly, and there are many private guides available that will tell you all about the gorgeous details of each madrasa. 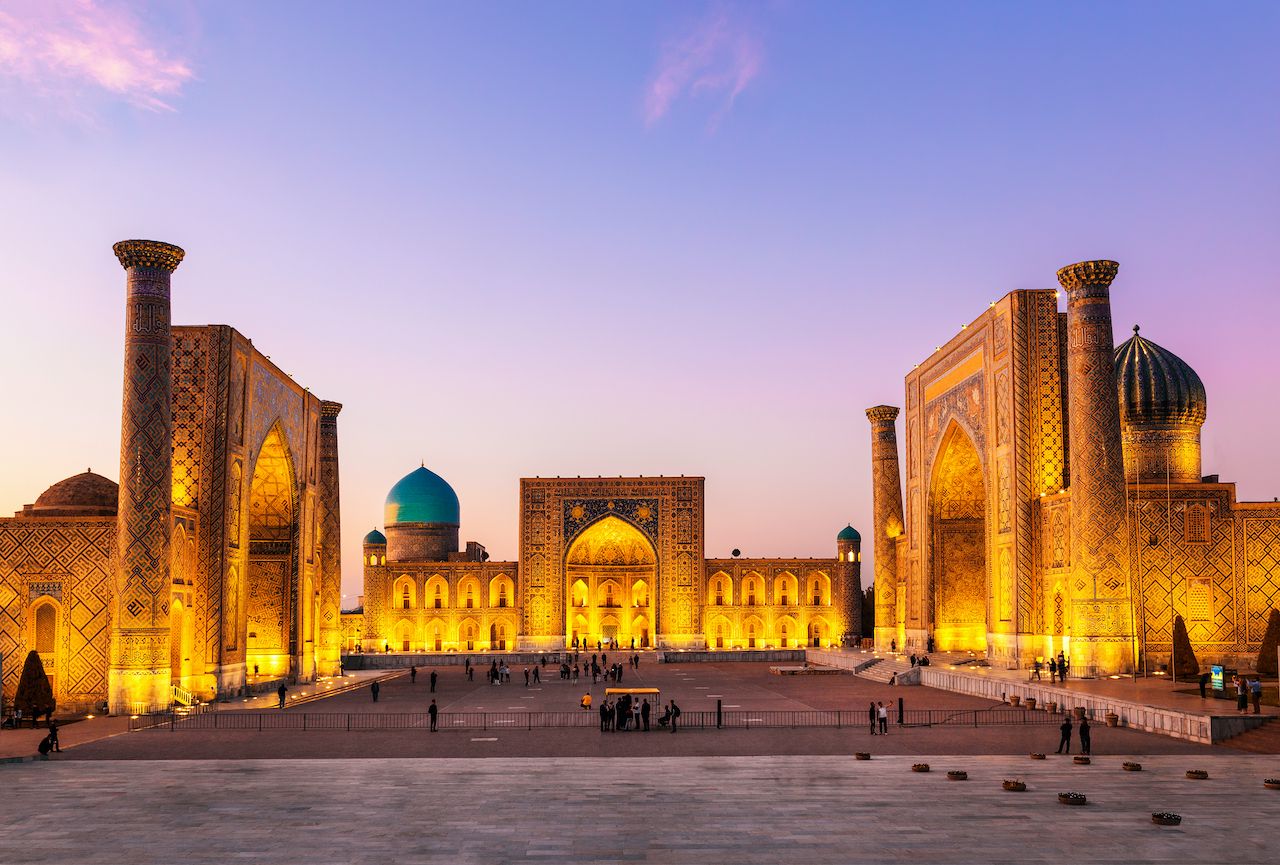 Stay in the square until dusk settles and the tourist crowds fade — at night, the place is beautifully lit up. But no matter the time of the day, if you don’t feel small and in awe when standing in the middle of Registan Square, you’re doing it wrong.