The Kreuzberg neighborhood of Berlin is best depicted by an ominous and rather dark catchphrase: Once it gets you, you’ll never leave. It just might be true given that this large district in the German capital was once enclosed on three sides by the Berlin Wall. But these days, it’s the rich street food and thrumming nightlife that keeps visitors captive. Combine these with a quirky, artsy vibe that contrasts with Berlin’s thriving nightclub and party scene — and you have an area that actually does embody the counterculture that the city is known for.

The best way to experience Kreuzberg is on foot or by bike. You’ll see locals pedaling along the wide sidewalks and streets — though the city’s very noticeable yellow subway cars pass through and connect the neighborhood with its surrounding districts. Even if you stay on the other side of town, getting in and out is both easy and worth the effort. Home to an array of new arrivals from Germany and abroad, Kreuzberg pulses with a revolutionary vibe that makes it both the hippest and most unique place to hang out on a visit to the German capital. Here’s how to take it all in.

Kreuzberg is a neighborhood of immigrants — and their cuisines. 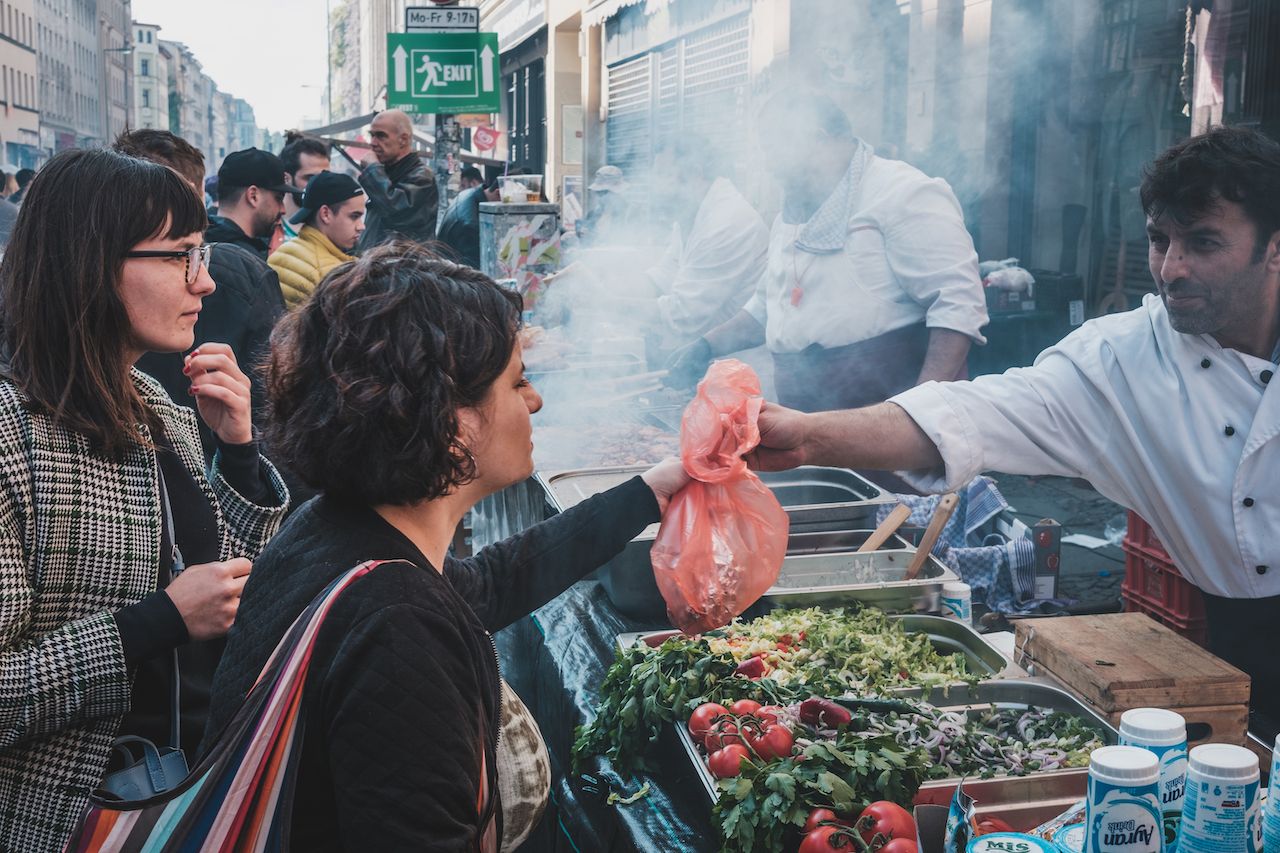 Kreuzberg’s streets are lined with food vendors, complementing the stark architecture and the gritty, working-class vibe of the area. More than 200,000 Berlin residents claim Turkish descent, and Kreuzberg’s Turkish community is one of the world’s largest outside of Turkey itself. A visit to a kebab shop — any kebab shop — is a must. Among the most popular is Adana Grillhaus on Skalitzer Street. On Saturdays, the banks of the Landwehrkanal fill with stalls for the Turkish Market, where you shop for Turkish goods like rugs or taste a wide variety of grilled meats and sip on saklip, a hot and milky tea.

Also prominent in the neighborhood is the Korean community. A true wunderkind of Kreuzberg’s Korean population is Kimchi Princess. Here you can go all out and fry an octopus at your table — or, if that’s a bit much, savor the fragrant bibimbap (rice with meat and seasoned vegetables) in a hot stone bowl, knocked back with a shot of soju.

There’s also the Angry Chicken, which makes Korean-style fried chicken in varying degrees of anger from “happy” (no spice) to “furious” (volcanic). The chicken is reminiscent of what you’d find at a fried chicken shop in Seoul, though this is a fast food spot, so be ready for loads of grease. For something a bit more German, stop by Burgermeister for a patty or chili cheese fries served in a space that used to house a public toilet – but be prepared to wait in line.

It has biergartens and upside-down bars. 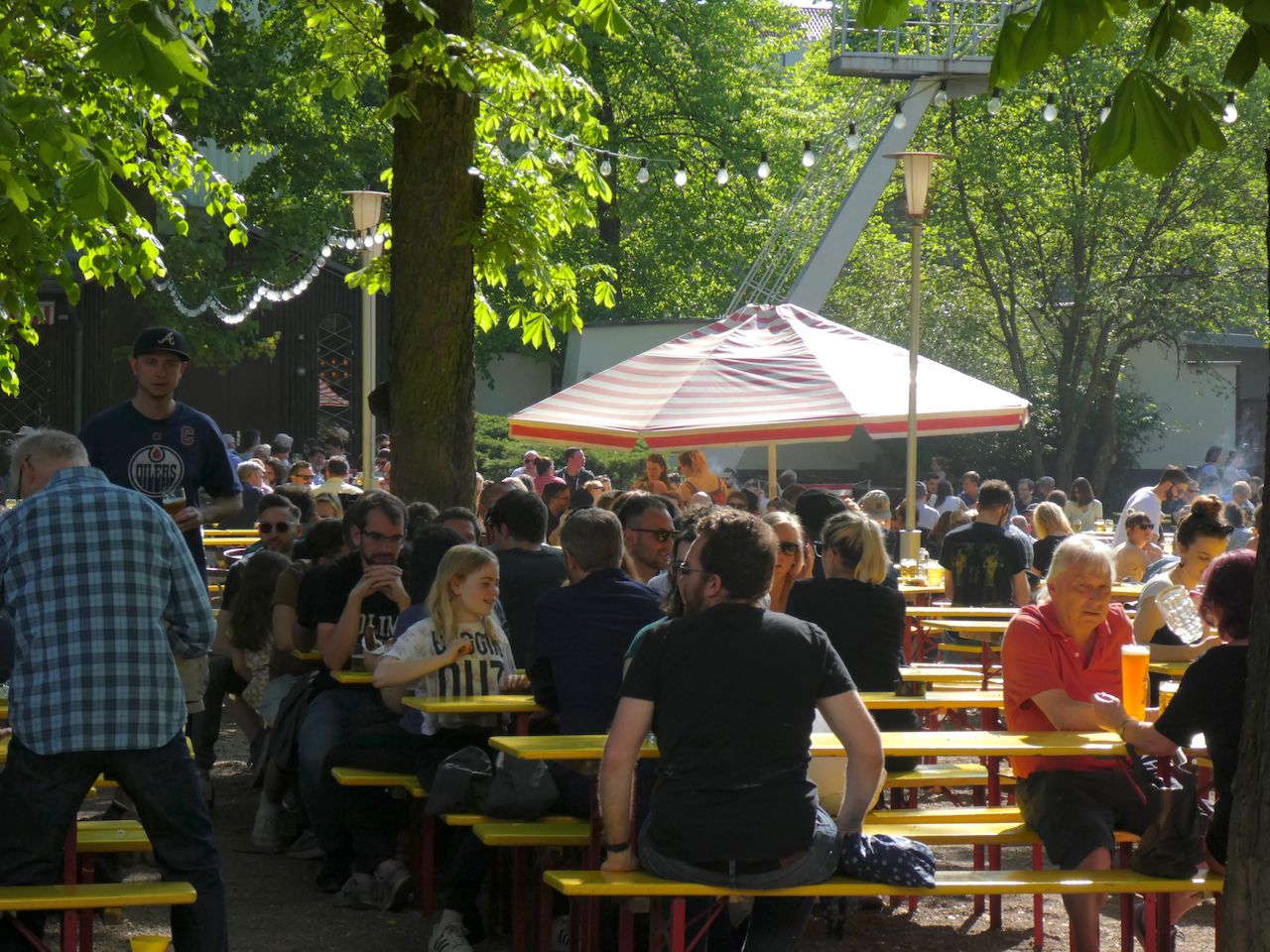 Given Berlin’s notorious flatness, it’s unsurprising that its highest natural elevation is only 216 feet. The highest actual point is the 390-foot Teufelsberg, an artificial mountain built from the rubble of the city following the Second World War. Despite its underwhelming height, the setting of this peak, Viktoriapark, is well worth a visit. A towering waterfall cuts through forested grounds, a prime spot for people watching.

The park also includes a beer garden called Golgatha, a fantastic hangout for when the mercury peaks on the city’s sweltering summer days. Do as the Berliners do. Grab a beer and let life slow down a bit as you watch both tourists and local families make their way through the park. 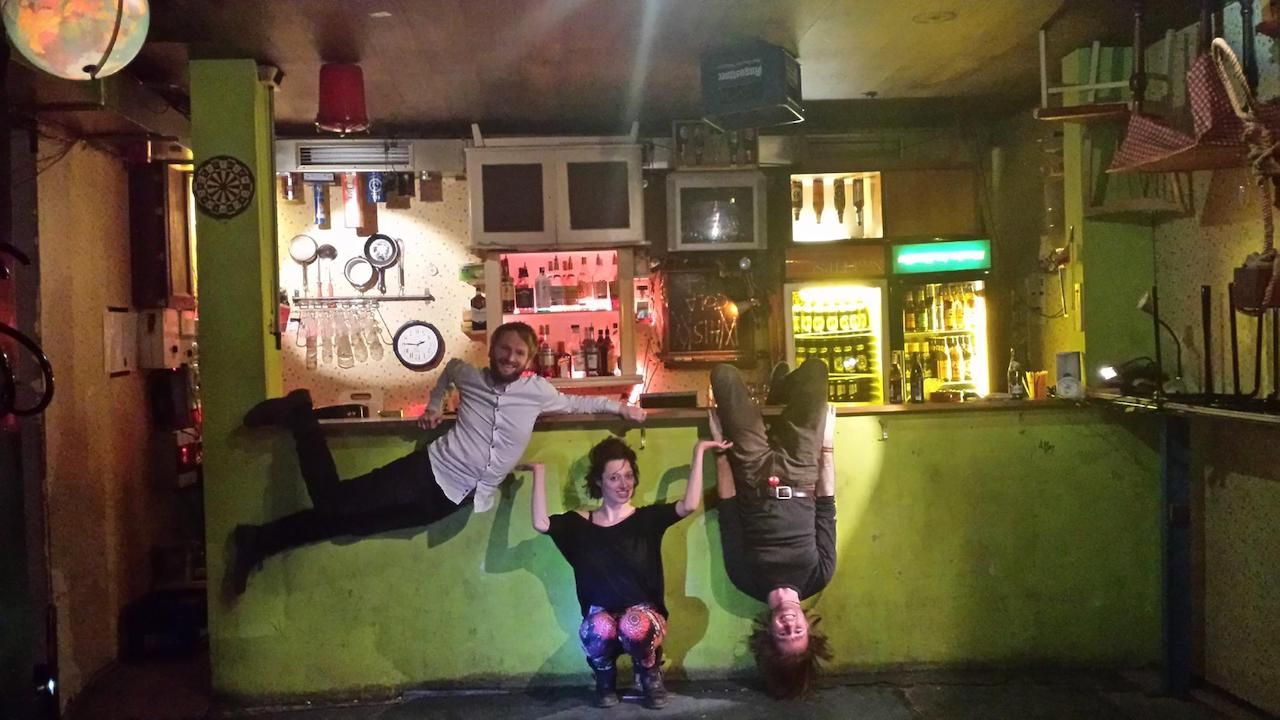 This experience should inspire you to wander to another pub, and that pub should be Madame Claude. The spot is a former brothel, and the current owners decided it was a great idea to hang their furniture upside down to create the illusion of sitting on the ceiling. It’s weird at first, for sure, but this illusion becomes more convincing with each drink.

Madame Claude runs an open mic night on Sundays, where you could see anything from comedy singers to wailing beat poets. If you prefer drinking the right way up, the John Muir bar gives Kreuzberg an American twist with an expansive selection of bourbon and cocktails, the most popular being their punchy whiskey sour. 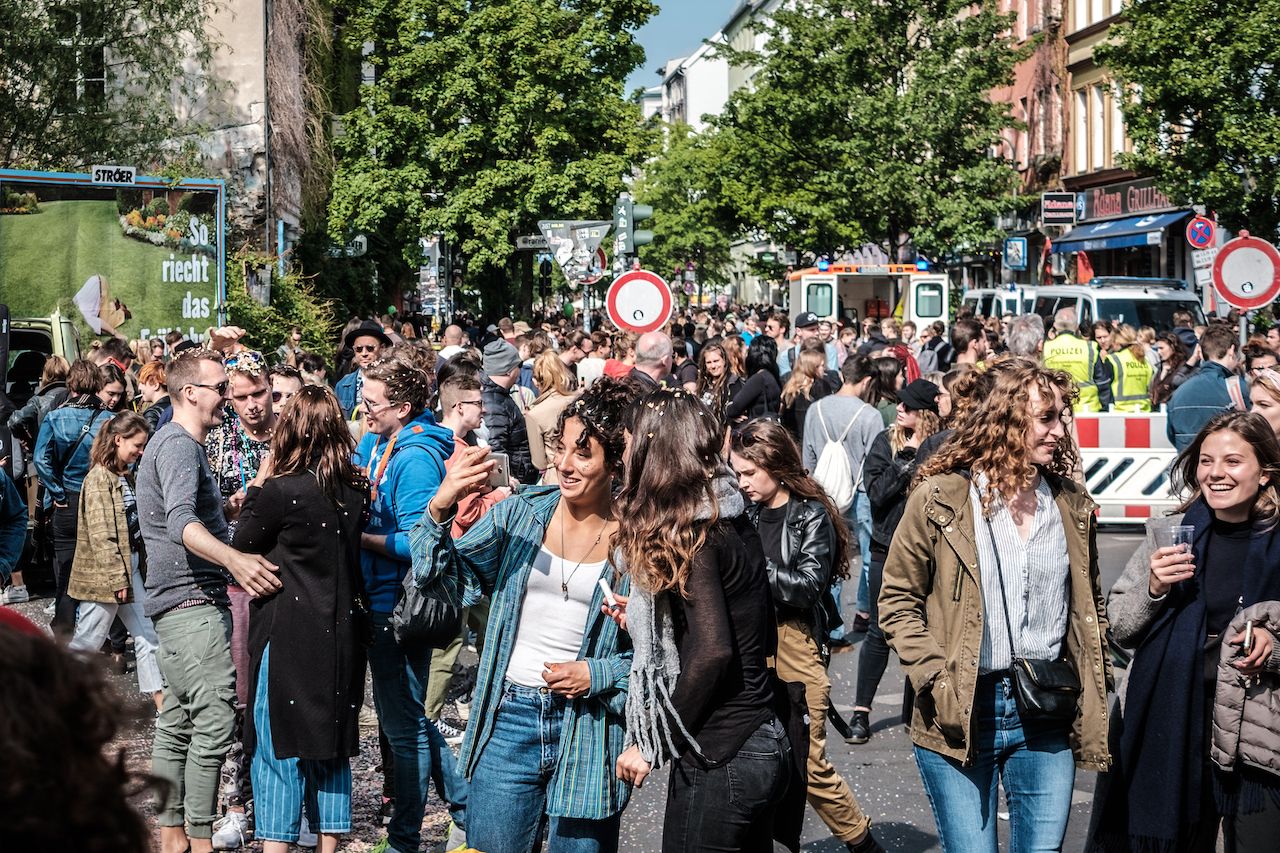 “Anything can happen on May Day” is an oft-repeated phrase in the run-up to the celebrations on May 1, one of the liveliest days of the year in Kreuzberg. To celebrate the original “Labor Day,” locals pour onto the streets to join a left-wing protest or take part in the more peaceful partying of Myfest a few streets away. It’s more festive than righteous these days, with open-air concerts and currywurst stalls punctuated by the occasional sight of a Berliner crowdsurfing by on a sofa.

In early June, Kreuzberg’s roads are fenced off for the Karneval Der Kulturen, a four-day celebration of diversity. This culminates in a street parade on Pentecost Sunday, comprising everything from samba to rock bands to techno. Later in June, the Fête de la Musique takes place all over Berlin but is best enjoyed in Kreuzberg, which forgoes formal concerts in favor of spontaneous street performances by musicians from around the world.

The street art scene is vibrant. 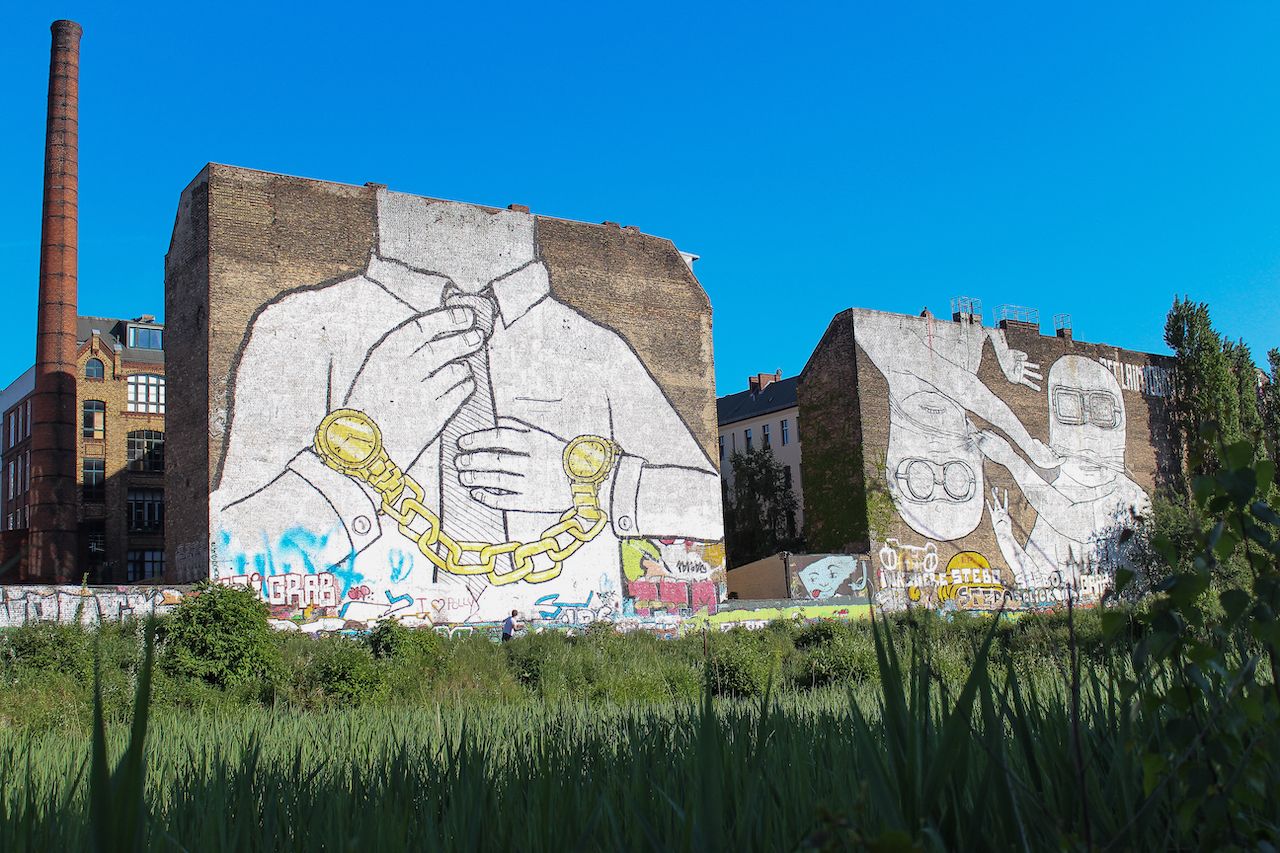 The neighborhood is also a hotbed for vivid street art. Though Kreuzberg hosts top galleries like the Künstlerhaus Bethanien and Berlinische Galerie, it’s actually possible to view most of the neighborhood’s art outside on a walkabout. Kreuzberg’s street art scene fluctuates with time, as new paintings go up and others are removed by local authorities for one reason or another, or sometimes even the artists themselves. In fact, in 2014 Italian street artist Blu covered two of his famous murals in black paint to protest urban development policies.

You’re likely to see something new, something classic, and, in the neighborhood’s grand tradition, something totally wack. One work unlikely to be disappearing anytime soon is the Cold War-inspired Astronaut Cosmonaut by French artist Victor Ash, which recently celebrated its 10th anniversary.

CultureThis Border Town Between Germany and Denmark Offers the Best of Both Cultures
Tagged
Culture Travel Insider Guides Berlin, Germany
What did you think of this story?
Meh
Good
Awesome