By all measures, Petra is the most famous attraction in Jordan. The ruins saw 780,000 visitors in 2017. It’s also where Indiana Jones found the Holy Grail, increasing its appeal among Western audiences. The fame of Petra overshadows all the rest Jordan has to offer, an unfortunate truth as Jordan offers hiking, expansive valleys, and the best lamb dish you’ve ever had. Religious history in both the Muslim and Christian faith runs deep here, with the holy texts of both religions citing locations believed to be within the country. Petra is, in itself, an incredible site that is worth a visit — but here are the top things to do in Jordan beyond the Lost City. 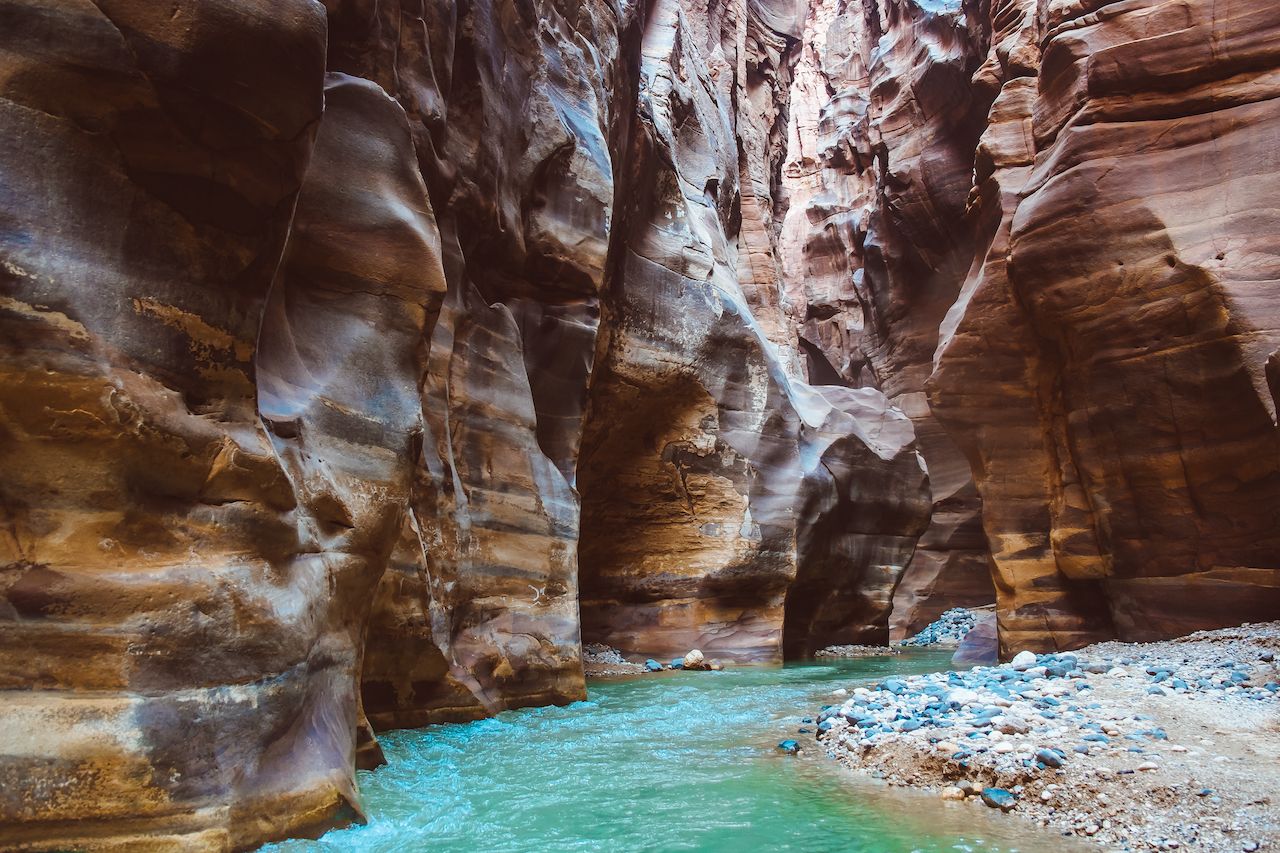 Wadi Mujib is a canyon in southern Jordan about an hour and a half south of the capital city, Amman. It looks like a thin slice cut into the sandstone mountains, and the river that runs through it is believed to be the biblical Arnon stream. The altitude inside the canyon goes as high as 2,952 feet and as low as 1,312 feet below sea level. This change in elevation causes the river to form an aqua park-like landscape with water often appearing a similar green to the Caribbean Sea. A hike provides plenty of opportunities to slide from rocks into naturally formed pools.

There are various trails you can take according to your fitness level. The most popular is the Siq Trail, which takes two to three hours from start to finish, with the base of a waterfall at the end of the trail. All trails start from the Mujib Adventure Center. There you’ll be given life vests — wear it at all times for your safety. Along some parts of the trail, you need to swim against the current and climb rocks against water flows. You can also hire a guide at the Mujib Adventure Center. This keeps you safer and also enhances the educational experience, as the guides know the history of the canyon and which rocks are safe to jump from. A little help can also come in handy with the light climbing involved in working through the canyon.

Camp in the Arabian desert. 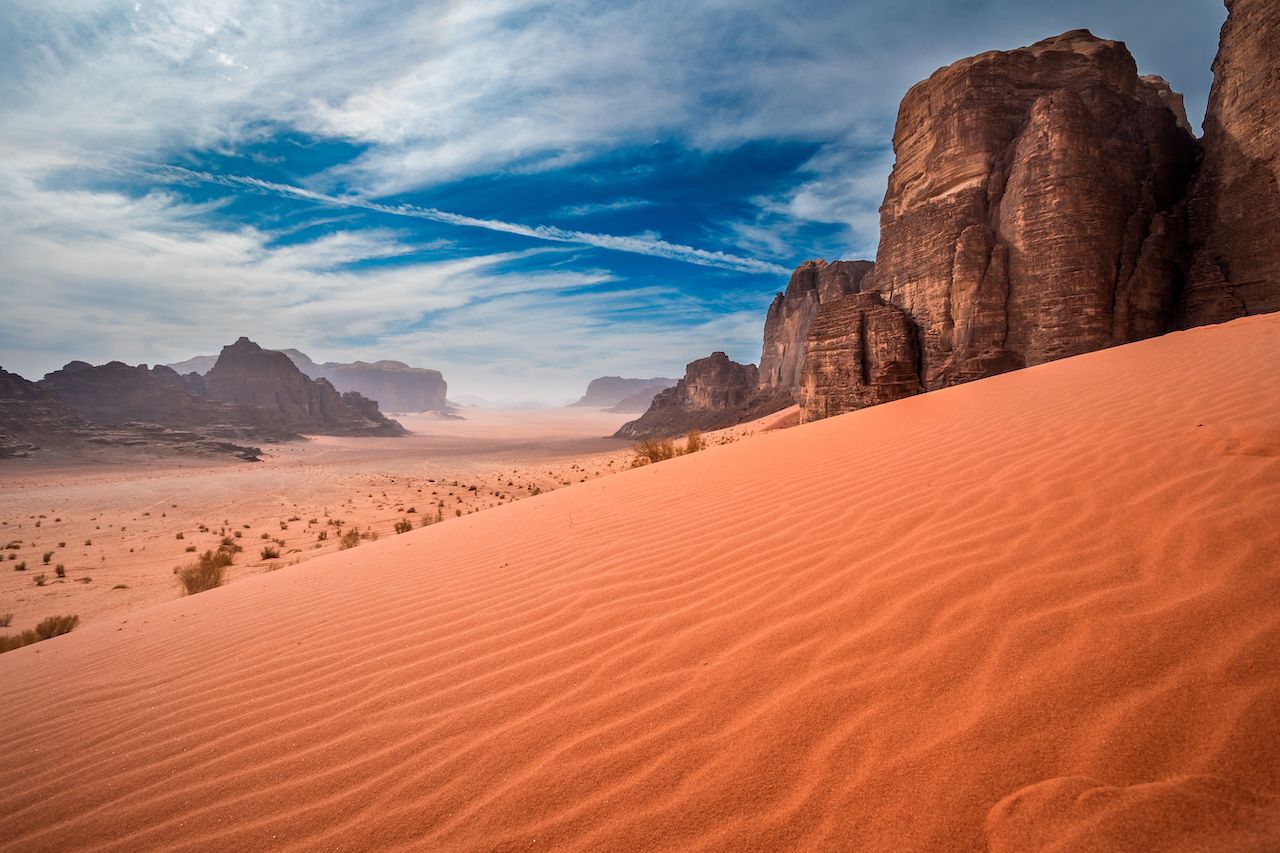 Wadi Rum is a special valley in the Arabian Desert. The landscape resembles Mars at first glance so much so that parts of the movie The Martian were filmed here. The sunsets bring out a striking contrast of red and orange across the red dunes and rock bridges of the valley. It’s possible to see hundreds of stars at night when the weather permits. Multiple campsites are available for overnight stays, ranging from basic tent-style camping to glamping. No matter which option you choose, stars will be the only light source around other than your campsite and there won’t be much noise except from other campers, so be prepared for solitude. Nights in the desert get cold fast — bring clothes for both unbearable heat and freezing cold. Reserve your campsite in advance through an operator such as Wadi Rum Bedouin Camp or book individually with a quick Google search for “Wadi Rum camping.”

Driving from Amman to Wadi Rum, also in the south of the country, takes four to five hours. If camping isn’t your thing, Jeep tours are a great way to explore Wadi Rum. They cover more ground compared to hiking tours. You can find more information about Wadi Rum and the tours at the visitor center, where trail maps and guided tour information are available. While camel rides are available, be conscious about having an ethical experience.

Get out to the Dead Sea, but consider your environmental impact. 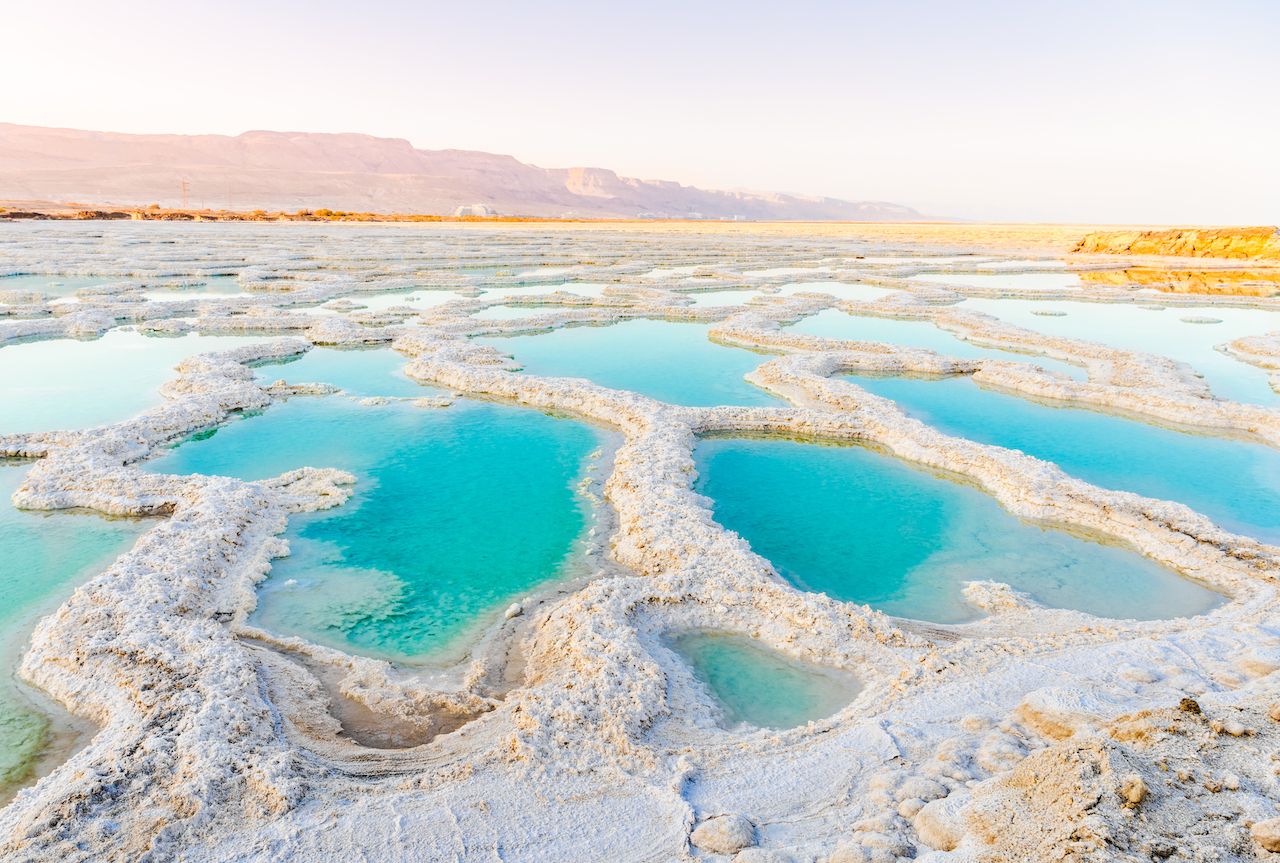 The Dead Sea is about an hour and twenty minutes west of Jordan. It’s actually a giant salt lake and has attracted both health and leisure visitors from around the world for over a thousand years. Among its biggest appeals for wellness travelers is that its elevation makes it possible to inhale more oxygen there than almost anywhere else. At low altitude, the barometric pressure is higher than the sea level, which increases the oxygen content of the air. The high salinity of the water floats whoever tries to swim and prevents plants and fish living in it — hence the name — and is also quite fun to float around in. The water is about seven times saltier than the world’s oceans and is also rich in minerals that give it an oily feel. The unusual chemical compounds of the water and the mud are believed to have medical and cosmetic benefits for the skin and body.

As tourism to both Jordan and neighboring Israel grows, the issue of what impact these mud baths and floating excursions are having on the environment has come into focus. Environmental groups and media outlets have raised concerns over the Dead Sea’s rapid shrinking, partially a result of industrial evaporation, sinkholes, and the pounding sun, but also from diversions of the incoming water source. Jordan is working on projects to stop the shrinking, but because tourists are prone to taking bottles of the “magic mud” home with them, it’s hard to offset the changes. As visitors, it’s vital that we do our part to help preserve this spectacle of nature. Enjoy your time here and leave the water and mud where they belong.

Walk through art and history in Amman. 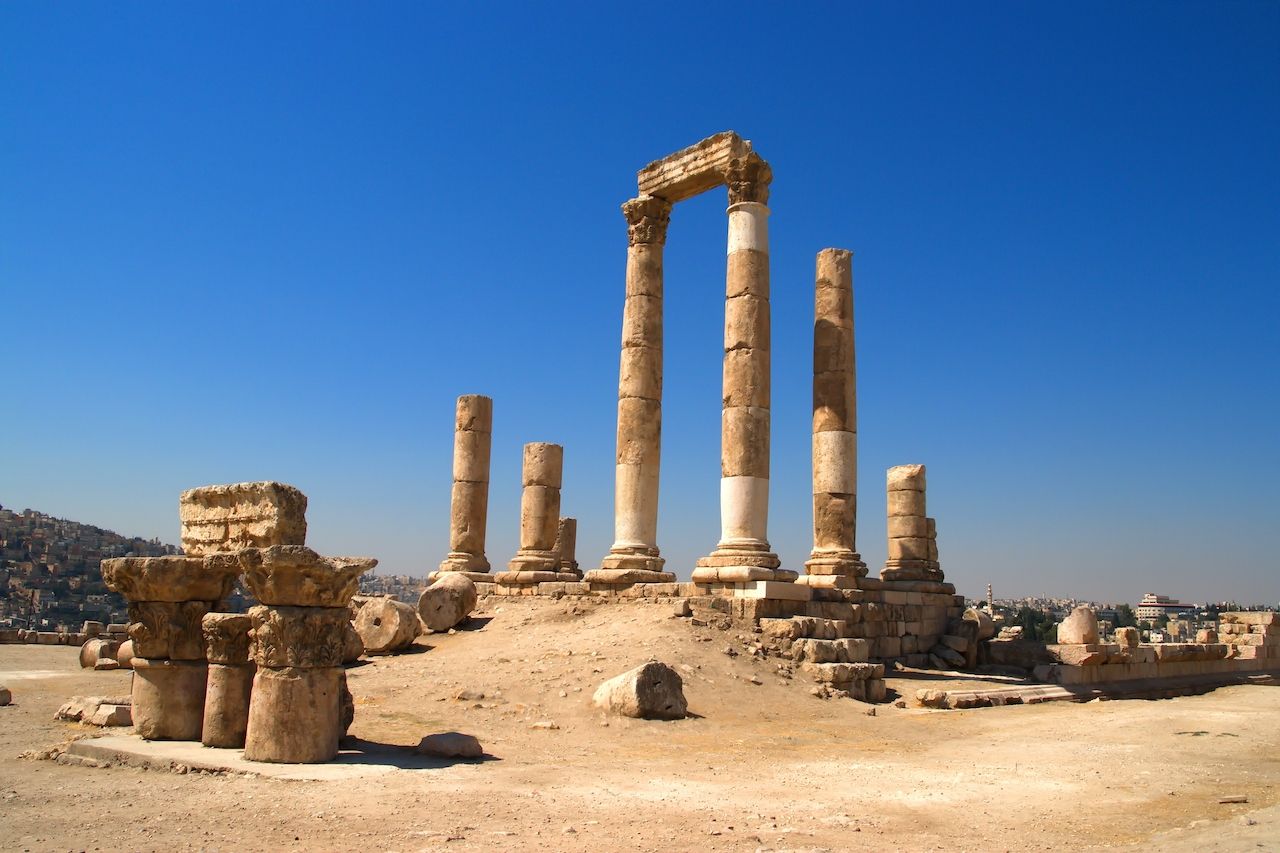 Amman is a city of four million people surrounded by and containing ancient ruins, a modern capital as rich in cultural art as it is in history. Deciding what to do on a one or two day stay in the city can be an overwhelming experience, but a visit to the Citadel is a must. In the heart of the city, this historical site has housed people since the Neolithic period. It is home to the renowned Temple of Hercules and the Jordan Archaeological Museum, along with the often-photographed stone Hand of Hercules. Thanks to its location at the top of Jabal Al-Qal’a, you’ll have 360-degree views of the city. Just southeast of the Citadel is the Roman Theatre, a sprawling amphitheater that hosts both the Museum of Popular Tradition and the Jordan Folklore Museum, both of which you can walk through in an hour or so.

Another Amman specialty is its unique taste for blending cultural art with coffee. A short walk from the Citadel and the Ayyubid medieval watchtower, Darat al Funun has six renovated historical buildings in a complex where it hosts regular exhibitions from artists and collectors. It also has a peaceful garden cafe with city views to enjoy a cup of coffee after touring the exhibits on display. Fann wa Chai is a cafe and art gallery where you can buy pieces from local artists, though the preference here is to sip a cup of tea. Salam Kanaan Gallery on Rainbow Street is a perfect spot for people watching as the steady stream of locals and tourists make their way through the heart of downtown. 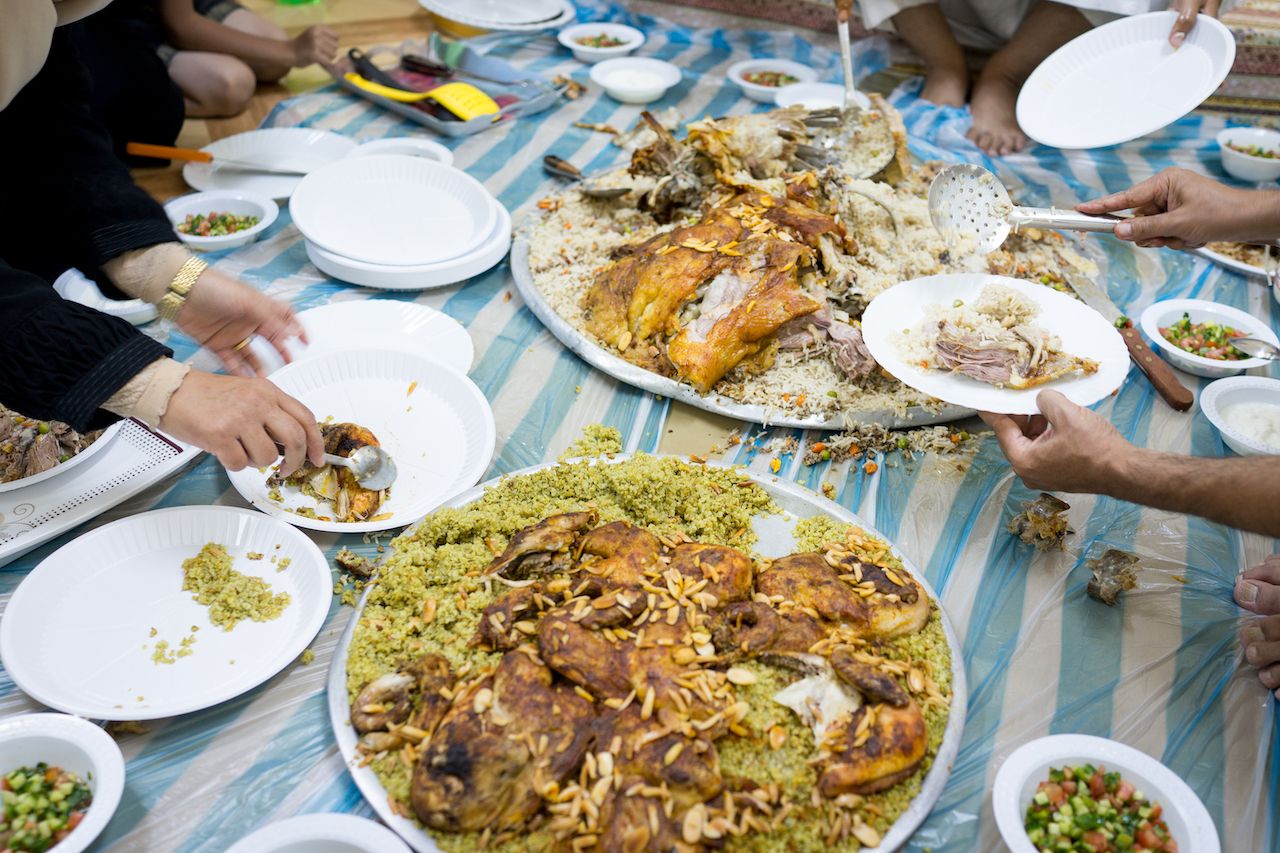 Amman is also where you can try local cuisine quite easily. The primary meal you need to have is mansaf, a traditional Jordanian dish of well-cooked lamb served with a bowl of rice and a sauce called jameed. The special ingredient of jameed is dried goat yogurt. If you are not used to consuming goat products, it can upset your stomach, an experience many tourists learn the hard way. Sufra is a nice restaurant just up the street from Salam Kanaan Gallery, where you can find mansaf as well as other traditional dishes like shawarma or doner. Whether you choose chicken or beef, both of these dishes are served wrapped up in saj bread with tahini sauces. And, because you’re in the Middle East, you have to try falafel. This is a vegan dish primarily served for breakfast. You can find it at restaurants and stalls across the city, but get it early in the morning because the best shops run out of falafel before noon.

TravelWhy Tunisia Should Be Your First Stop in the Arab World
Tagged
Culture Travel Insider Guides Jordan
What did you think of this story?
Meh
Good
Awesome

6 Ways To Make Your Visit To Jordan More Meaningful

6 Mouthwatering Traditional Dishes You Can Find in Jordan